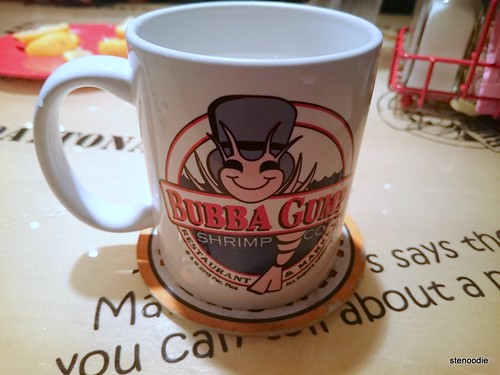 Bubba Gump!!  I’ve been wanting to go to this restaurant to dine at ever since I heard about it from the others from last years’s convention!  It’s a well-known seafood chain restaurant all over the U.S. that heavily relies on decor and themes from the movie “Forrest Gump”.  I finally had the chance to try this restaurant out after our team booked a reservation for all of us on the last day of Miami before the cruise. 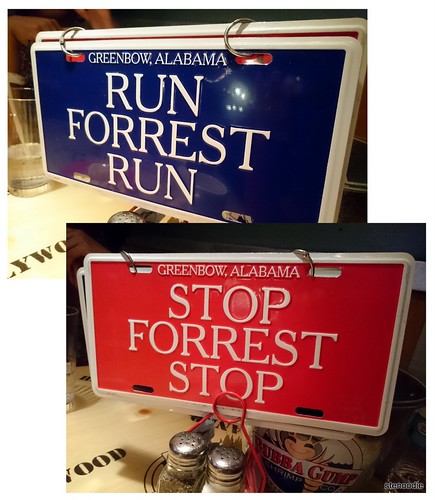 The signs to direct your server

Unfortunately, not everyone was able to fit into the room that we had booked for, so four of us ended up sitting at a nearby table.  This was fine by me.

After our server explained to us how the table system worked — there was a sign that said “Run Forrest Run” or “Stop Forrest Stop” on each table.  If you wanted the server to stop by your table, you put up the latter sign.  The rest of the time, you should keep it at the “Run” sign.  It was pretty cool.  I’m sure most of us have seen the movie before, right? 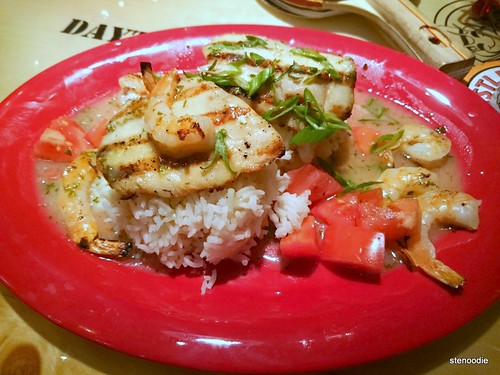 Since it’s a Cajun/seafood restaurant, I ordered the dish of shrimp with jasmine rice with mahi mahi.  The presentation wasn’t THAT impressive.  You have to remember that I had very high expectations of this restaurant after hearing about it and then returning to actually eat at it a year later.  The shrimps were good and the Mahi Mahi was a little more coarse than I expected it to be.  The jasmine rice was all right.  I did really enjoy the lemon butter sauce as it tied everything together.  The Mahi Mahi was also quite bland since it was broiled so I had to rely on the sauce for flavour.  The portion size was a good one.  It wasn’t exceptionally large and wasn’t exceptionally small either. 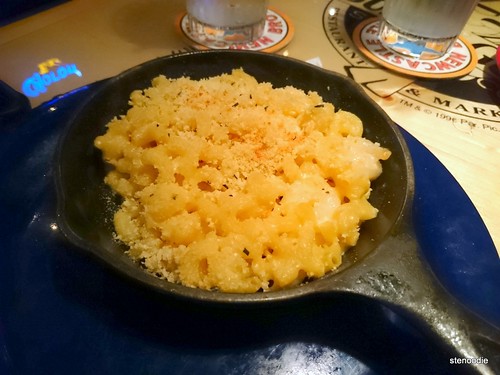 On the other hand, both Sereen and Leon ordered the Shrimp Shack Mac & Cheese (that sounded delicious in theory), but was disappointing when they received it.  They ordered the entree option that looked like an appetizer instead.  They weren’t full.

I tried a shrimp from Jason’s Shrimp New Orleans dish and the shrimp was actually covered with rather spicy sauce!  It was great but a little too spicy for my taste.  His shrimps were more substantial than the ones on my plate though. 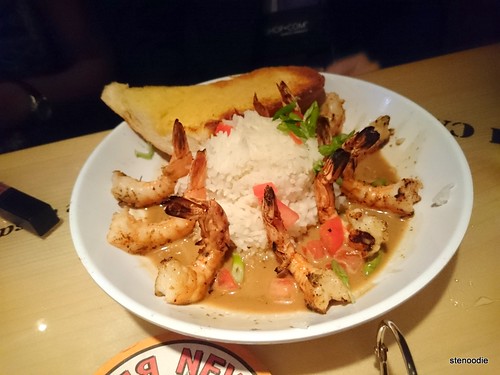 Shrimp New Orleans. $18.29
-an authentic spicy recipe from our staff in the French Quarter! Lots of tender shrimp broiled with butter, garlic and spices, and served with jasmine rice

The night could have gone a little better.  Next time, I’m going to try their other shrimp options and the dishes with mashed potatoes instead of jasmine rice (too boring).  Looking at the menu now, I would love to try their “Lt. Dan’s Drunken Shrimp” (large char-grilled shrimp and andouille sausage with mashed potatoes and bourbon sauce) and their “Bourbon Street Mahi Mahi” (char-broiled Cajun spiced Mahi Mahi with bourbon sauce and grilled shrimp, served over mashed potatoes) since it was only 20 cents more than the one I ordered and would have contained a little more flavour.  I’m excited for us to dine there again next year though so I can try more dishes and hopefully be more impressed next time. 🙂