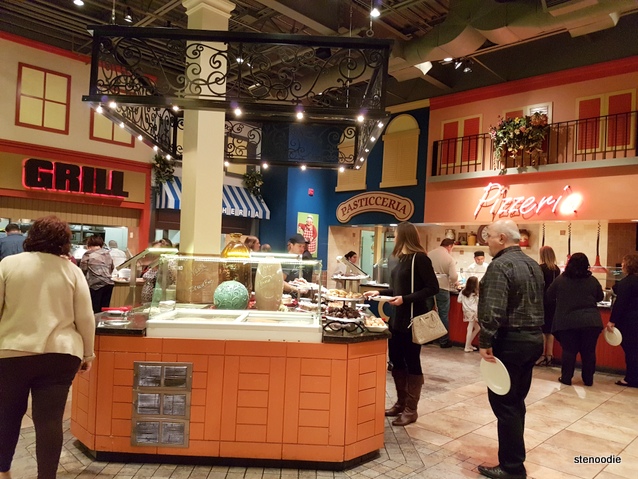 October 28, 2017:  This past weekend, four of us went to Vinnie Zucchini’s Italian Buffet in Vaughan for dinner in Vaughan.  We were actually in the area to go to another restaurant but since that one had a 40 minute wait, we decided to go here instead.  There was no wait for a Saturday night and lots of tables available!  This was my first time to Vinnie Zucchini’s and I didn’t even know that they were a Italian-themed buffet franchise restaurant!

The hostess led us into the restaurant for seating.  There were many tables and when I passed by the buffet tables, I saw that it was designed to be like you are in a Italian small town with each food station resembling a different shop.  It was really nice! 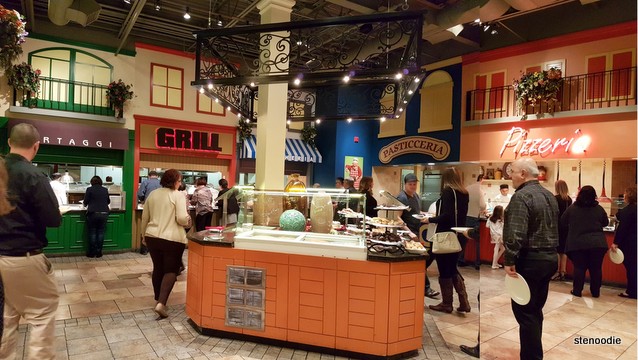 What a smart design for a buffet!

I was so impressed with the wide variety of Italian food that they had!  They had a really good pizza selection — all of the the pizza looked and was really good — they had garlic bread, breads, salad bar, soups, seafood, meats, vegetables, and lots of pasta too!  Mmm!  I don’t feel like I eat Italian food enough and this was definitely a night to fill up on it.  In the centre of the “town square”, there was a dessert station too!  Yummy! 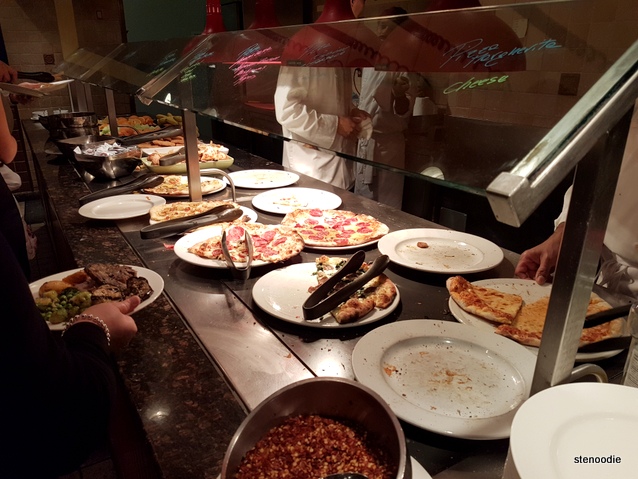 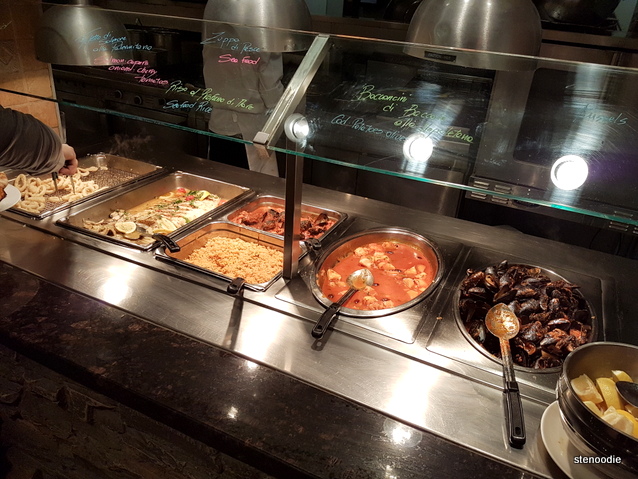 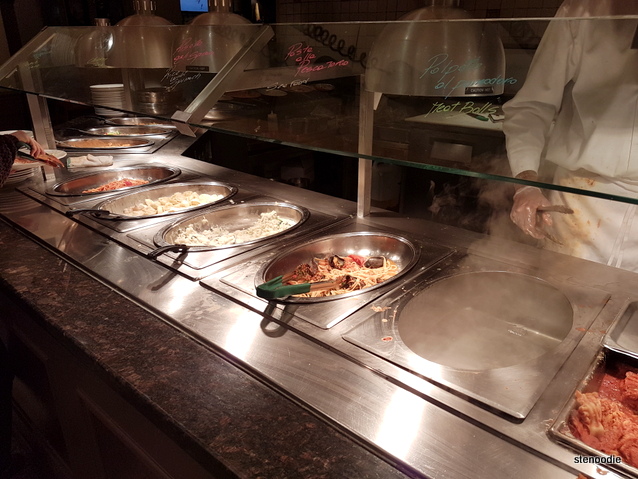 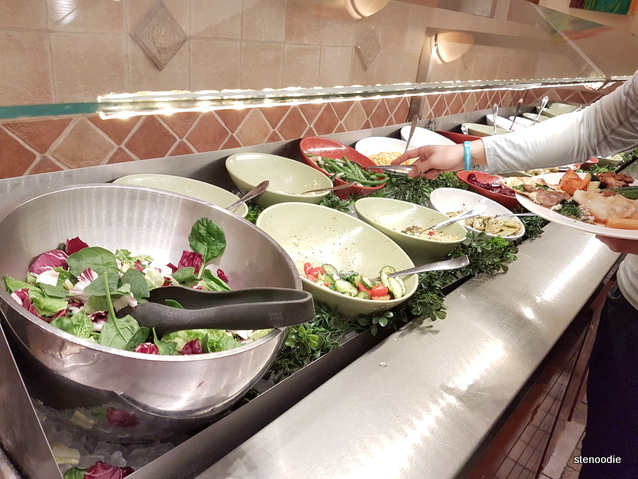 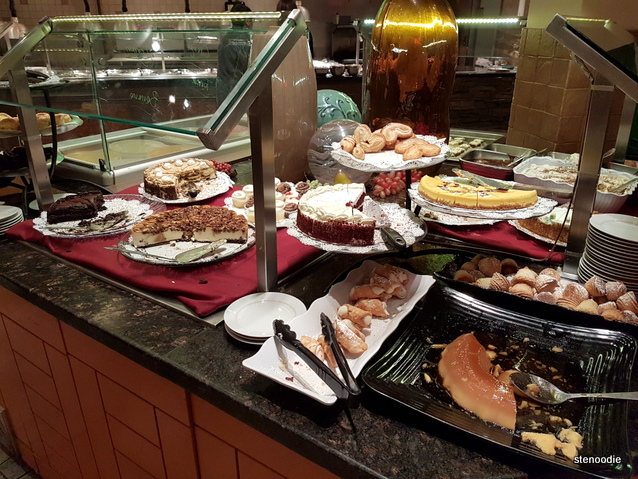 We were all really hungry, or at least I was so I loaded up on comfort food for my first place and ate rather quickly.  For this reason — and I also feel like my appetite isn’t as large as it used to be — I only filled up on one more plate of vegetables before I called it quits and had desserts.  Lol sad that I can only eat so little nowadays.  I think if I were to come again and eat at a slower pace, I might be able to squeeze one more plate of main courses in.  All of the the food looked so good!  There was a lot of variety that even though I tried to get a bite-ish of food from each dish, I still wasn’t able to try everything. 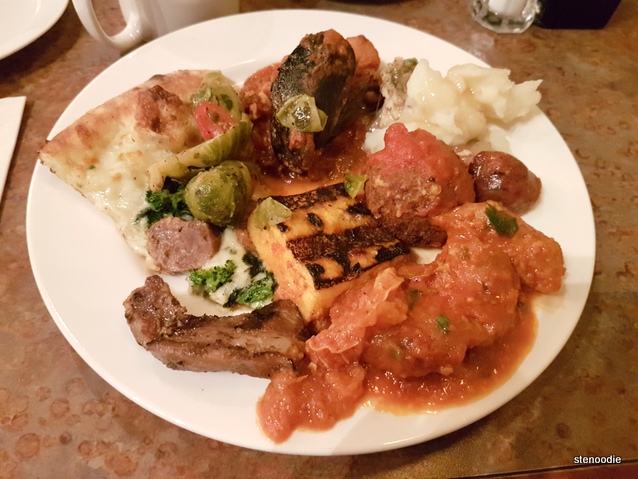 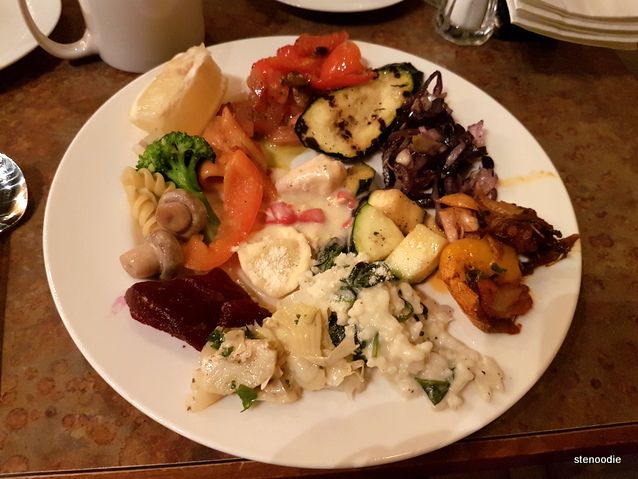 My second plate of mostly veggies

The highlight that night for me was definitely the pizza.  I had the spinach risotto too which I really enjoyed.  I also liked the lamp chops!  They had seafood too in the form of mussels and calamari in tomato sauce but I thought this was a little mushy.  I liked the polenta too.  (You can see all of the specific foods they offer on their website here.)

For dessert, I tried a bite of the chocolate cake and brownie that Helen got and it was pretty good!  The chocolate cake was a little on the sweeter side for me and surprisingly I found the brownie really good!  Mmm. 🙂 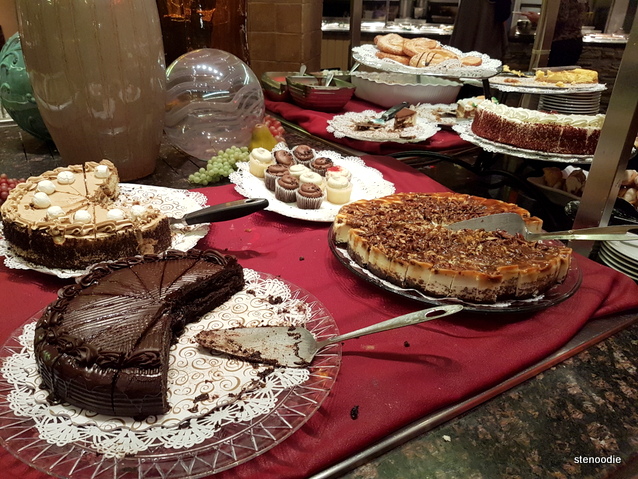 Sweet Table with tons of cakes and Italian desserts! 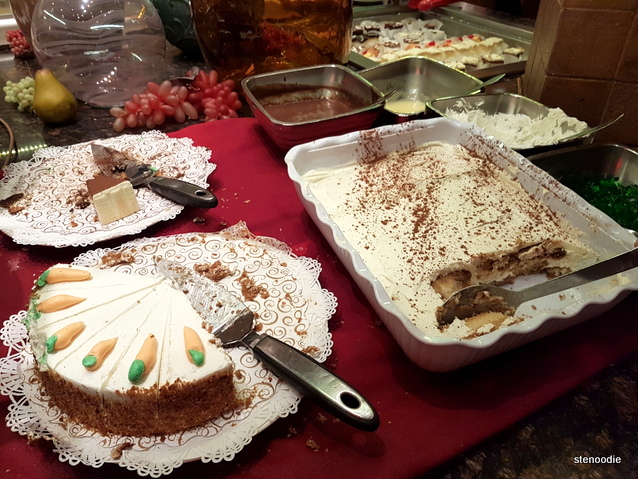 I also tried their Cannoli Siciliani but when comparing it to the one I had at Carlo’s Bakery in New York, of course it’s hard to compare.  This one had a harder shell. 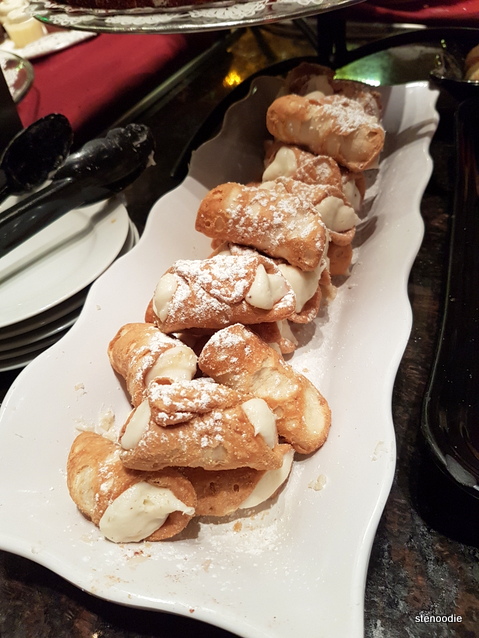 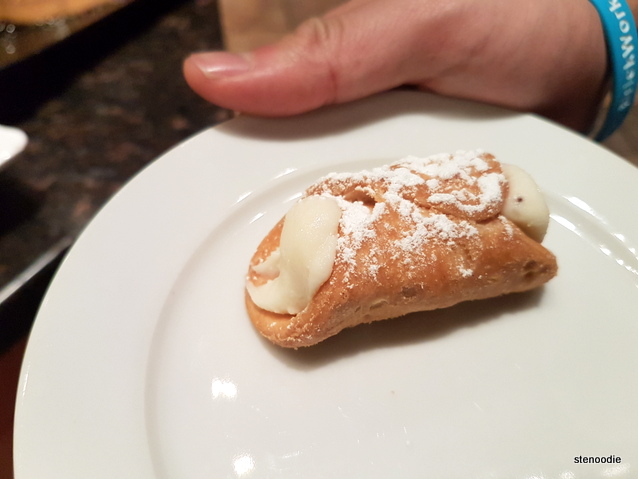 I later got a chunk of tiramisu and a slice of another type of tiramisu cake too.  Both were really good cakes. 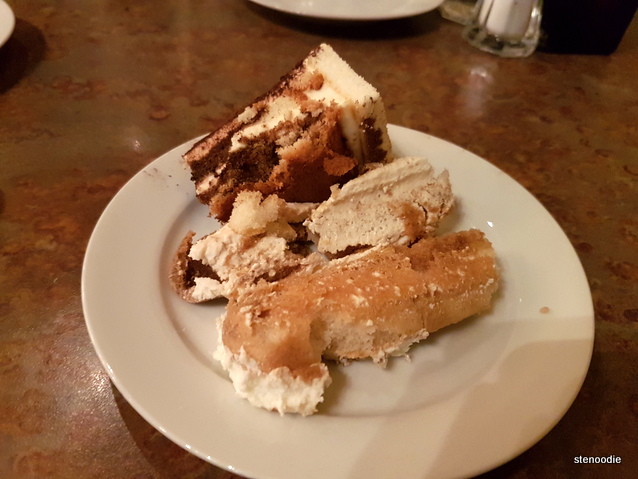 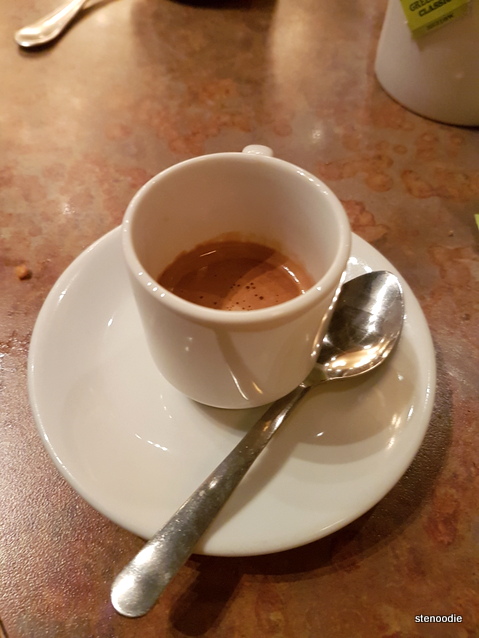 It was funny because there were two parties that night celebrating their birthdays, a 70-year-old and a 50-year-old.  Since we had two November birthday babies at our table, the server also brought us a cupcake with candles and we sang Happy Birthday to our birthday babies too.  That was so nice. 😀 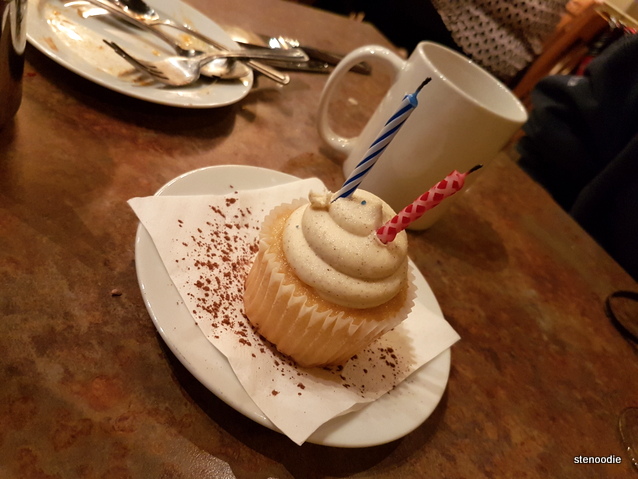 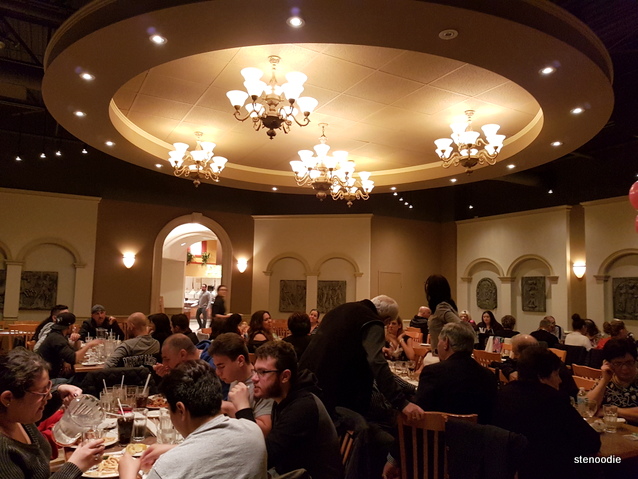 Such a nicely designed restaurant! 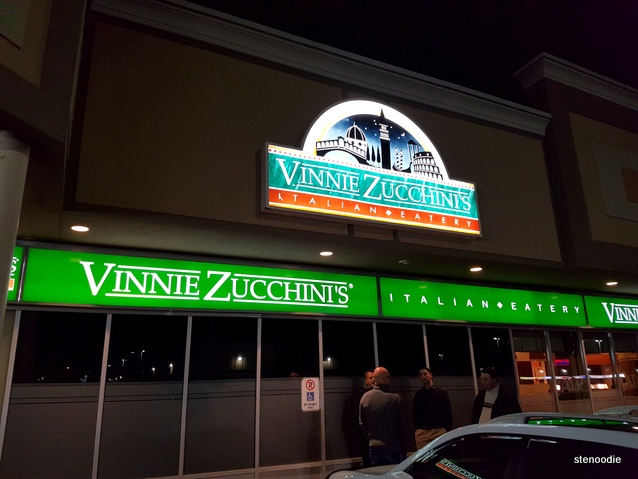 Their restaurant is very large!

4 Responses to My First Time at Vinnie Zucchini’s Italian Buffet!