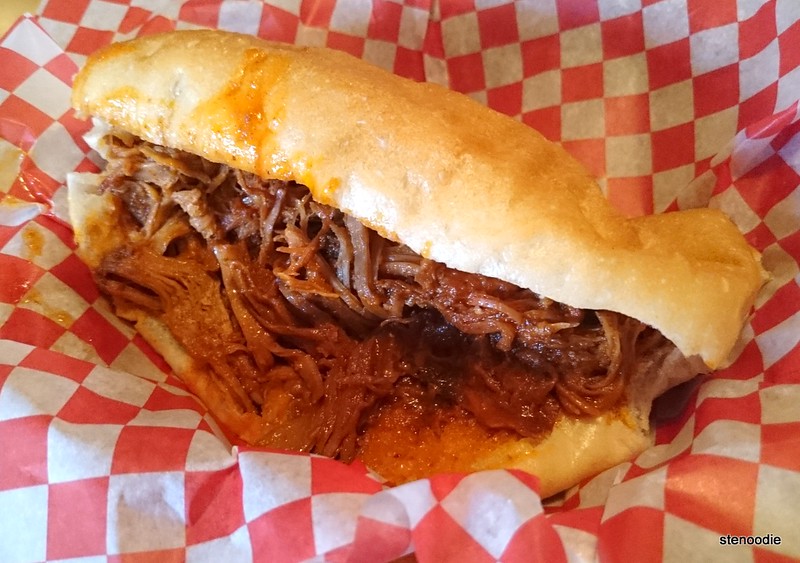 Lou Dawg’s is a Southern BBQ restaurant that also has space for open mic and live music.  It’s located on 589 King Street West in downtown Toronto.

It’s right underneath Home of the Brave (another great place) and they have an outdoor patio as well.

I was the first to arrive so I got a good chance to survey the vast menu.  Despite being on such a popular street in the Entertainment District, their prices are quite reasonable with average choices pricing at under $10.  Not bad! 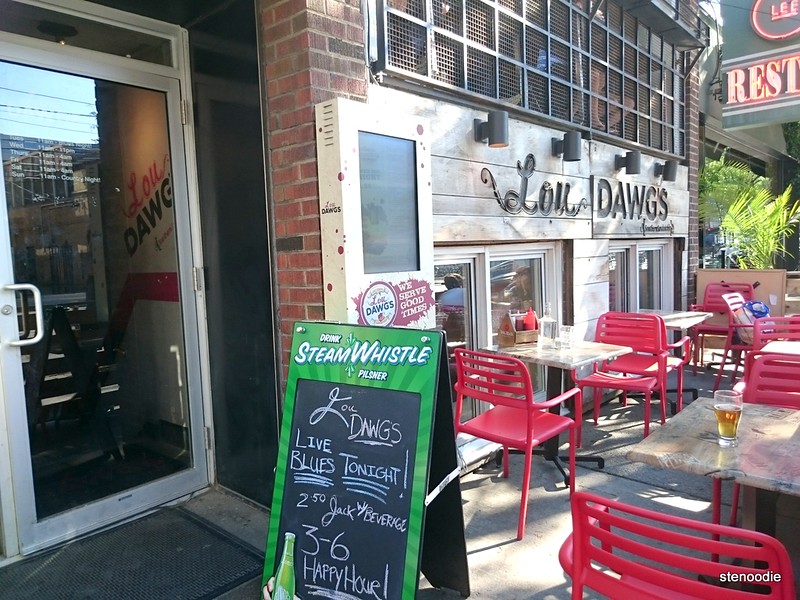 There is a nice patio outside 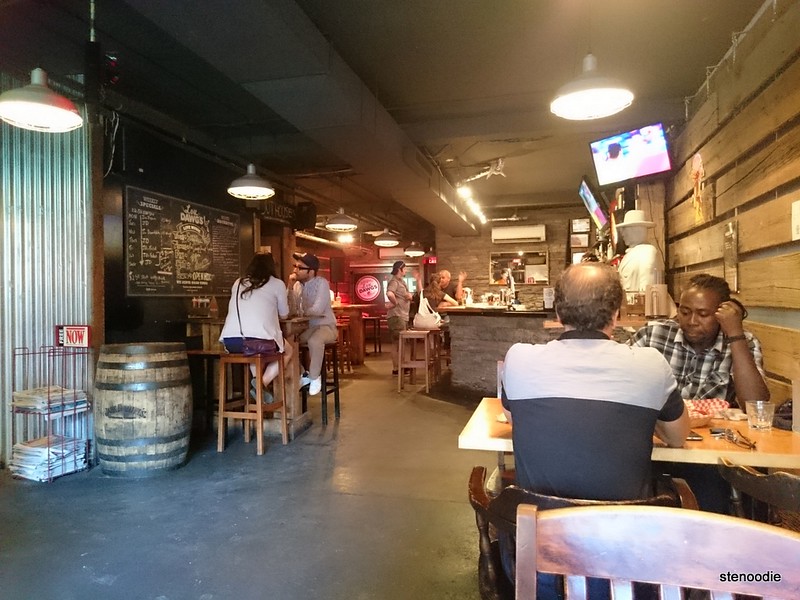 Otherwise, you can head down the stairs to this little spot for dining in

Daphne and I both ordered the Pulled Pork Sandwich.  Since it is a Southern BBQ place, pulled pork it was!

We were both genuinely pleased and surprised at how fast the sandwiches arrived at our table.  It was a no frills kind of plating with just the pulled pork sandwiches between a bun on a sheet of butter paper in a wooden bowl. 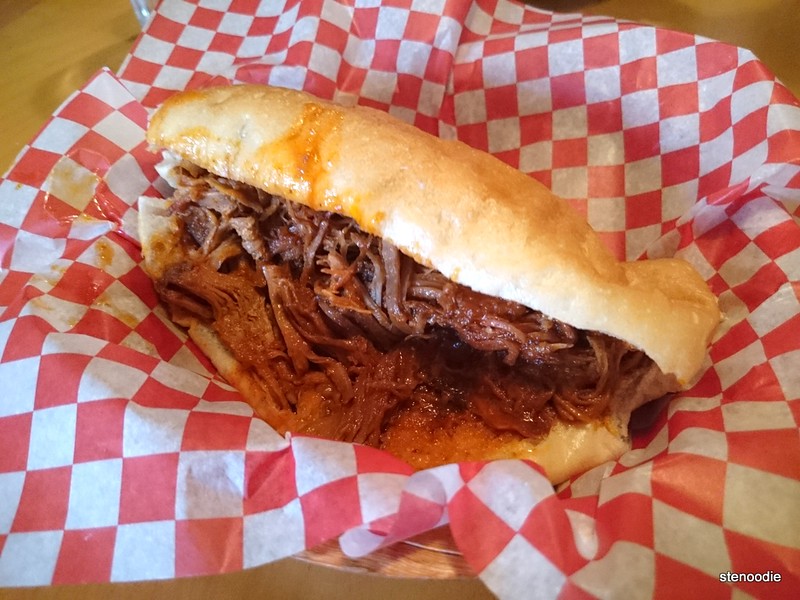 The Pulled Pork Sandwich looked good and it was actually amazing!  The pulled pork was so moist and tender with just enough BBQ sauce and matched together with the bun so well.  The bun wasn’t soggy at all from all the meat and sauce.  It was delicious!  I would say it was one of the best pulled pork sandwiches I’ve ever had.  Usually I don’t order pulled pork often because I find the sweet sauce contrasting with the salty pork meat.  However, in this case, the combination was perfect!  Yum! ^_^

Daphne really liked it as well.  This girl is not easy to please too! :p

Even though the Pulled Pork Sandwich was quite substantial already and good enough for one person, I had been eyeing the Deep Fried Pickles, so I ordered one just to try something else on the menu and to give my taste buds more reason to dance. 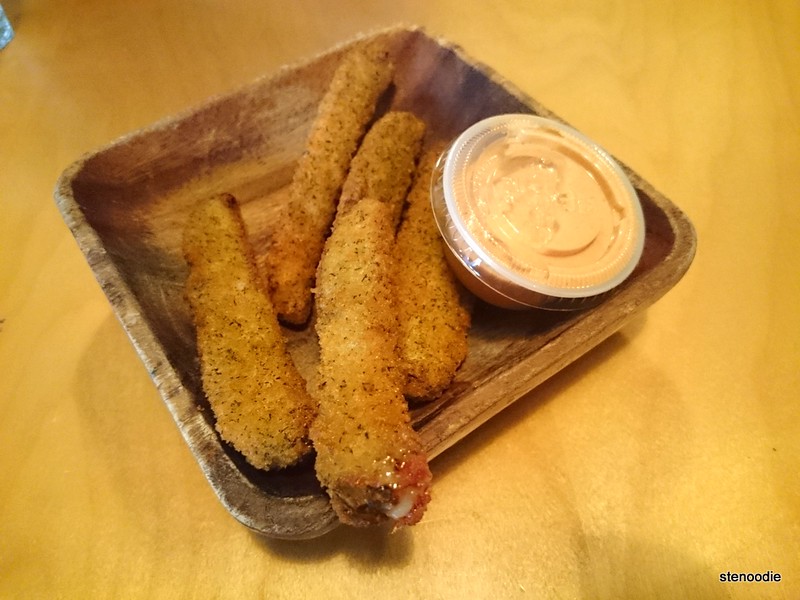 Our server said that the Deep Fried Pickles were his favourite!  It also didn’t take long for it to arrive — I love fast service like this.  Can more restaurants learn from Lou Dawg’s?!

Anyway, the Deep Fried Pickles arrived as five in a wooden bowl with some creamy BBQ sauce on the side.  (Daphne said they looked like fried cheese sticks.)  The pickles were fresh out of the fryer so it was steaming hot.

Each one had a hard cheese encrusted crust and the juicy pickle lay inside the crust.  It was a great combination and I really enjoyed it.  I especially liked the accompanying creamy sauce since it was just the right amount of intense flavouring. 🙂 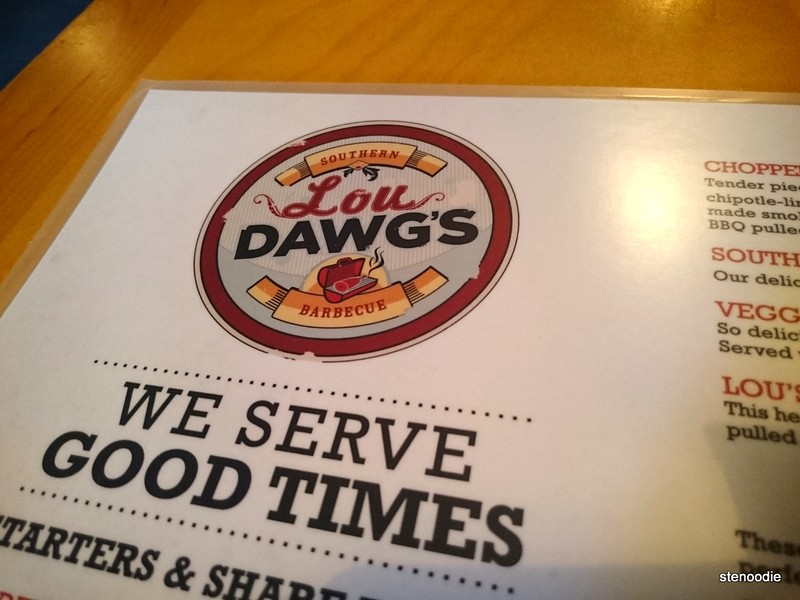 Lou Dawg’s, you were impressive!

I think that Lou Dawg’s is a great casual hangout place for a group of friends or even a birthday.  Daphne described it as a dive bar.  It is no frills with no utensils on the paper and there is a huge roll of paper towels on each table for you to use in case of messy fingers from eating wings and the like.  I would recommend this place! 🙂  It’d be nice to try their wings, poutine, and nachos next time!