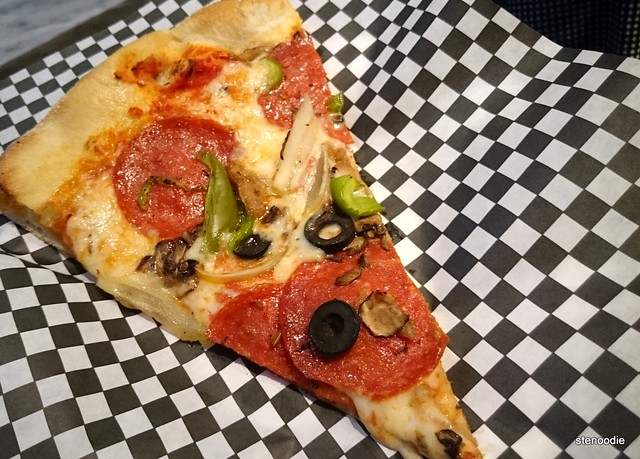 The week before I departed for Las Vegas, I shared a post on Facebook where I expressed my excitement about going to Vegas and asked my friends and followers what would be some great places to check out at Vegas (dining or not).  Two of my friends actually suggested “Secret Pizza“, a great pizza place.  I wasn’t aware of this place because they are apparently “secret “.  They are not listed as a restaurant!

This means that Secret Pizza relies heavily on word of mouth and one-to-one sharing and advertising in order to get their sales through.  That’s pretty powerful!  After we checked into the registration desk for our bootcamp event, we headed towards Cosmopolitan Hotel where this Secret Pizza place apparently was.  We didn’t know where to look at first and wasn’t planning on playing a scavenger game to find this restaurant.  We merely asked one of the employees there and they informed us that the pizza place was on the third floor. 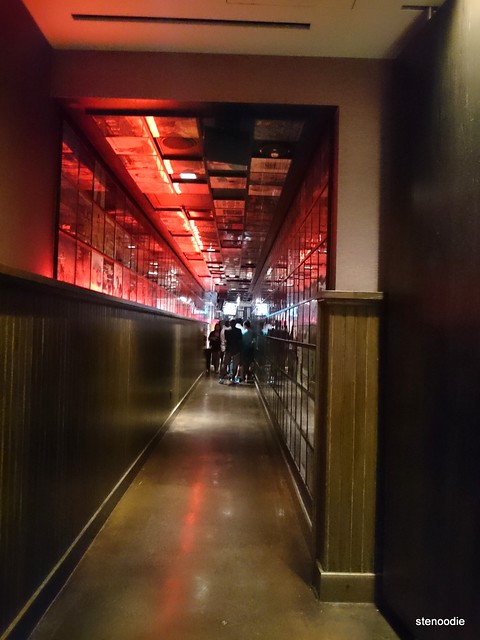 There is no sign to this pizza place. You have to look for this tunnel! 😀

When we got there, we saw a red-lighted tunnel that led you to a pizza eatery! (To me, it was like a tunnel, but it’s really a long hallway with lots of retro memorabilia on the walls.)  There was definitely no sign that showed “Secret Pizza” here!  Actually, there was a rather significant line-up of people too!  A few of us were actually expecting a sit-down restaurant but Secret Pizza is a take-out place with only a few stools on the side where you can dine in.

Because of this, the seven of us decided to get a pizza pie to share and eat outside where there were some seats.  The line moved quite quickly, but when we tried to order a pizza pie, we were informed that it would take 25-30 minutes for it to be ready.  We didn’t want to wait that long, so we ended up purchasing individual slices which were ready for purchase immediately. 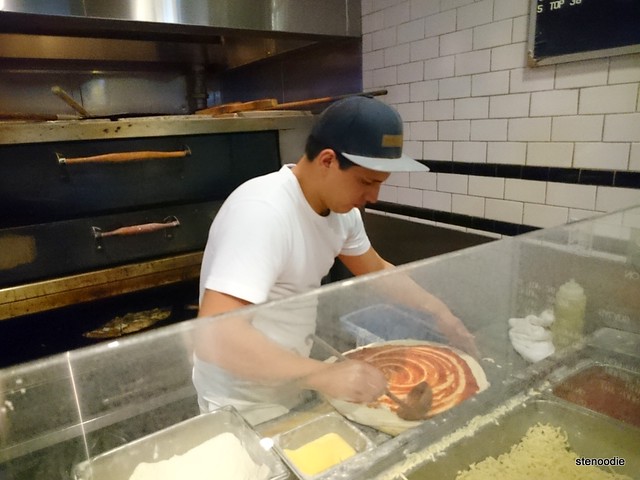 Their pizza is freshly made! 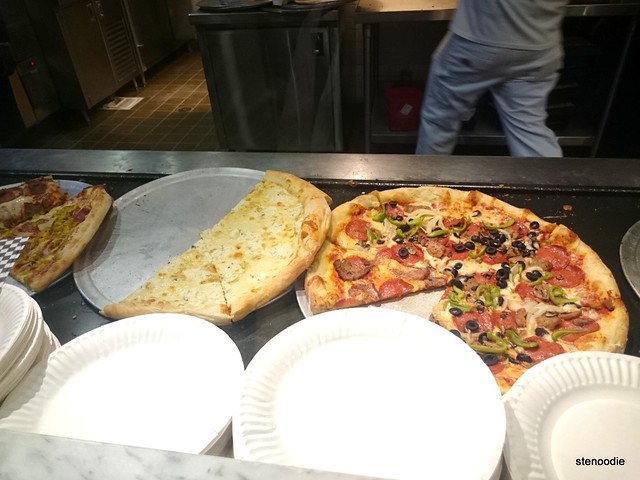 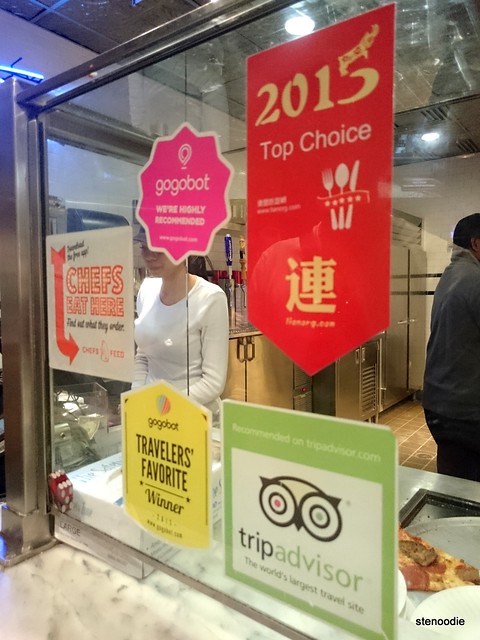 Look at these travel accolades!

There weren’t any signs that showed you what toppings or flavours of pizza there were.  But since there were so many people lining up, it didn’t seem like any topping of pizza would matter.  It seemed like the slice that I had had a bit of everything on it. 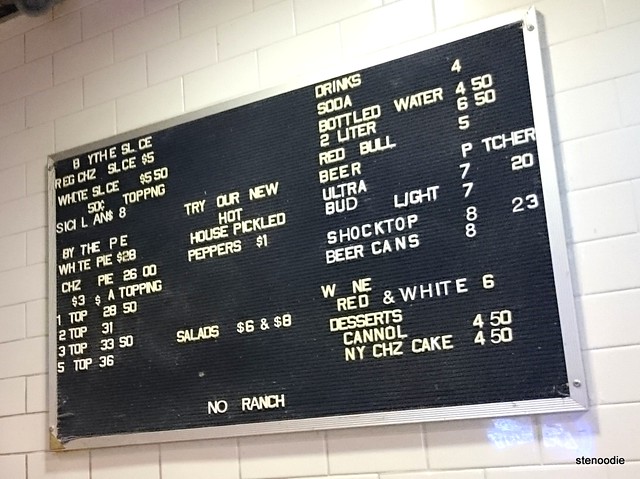 Their menu is very simple. It doesn’t say exactly what toppings they offer so you have to ask 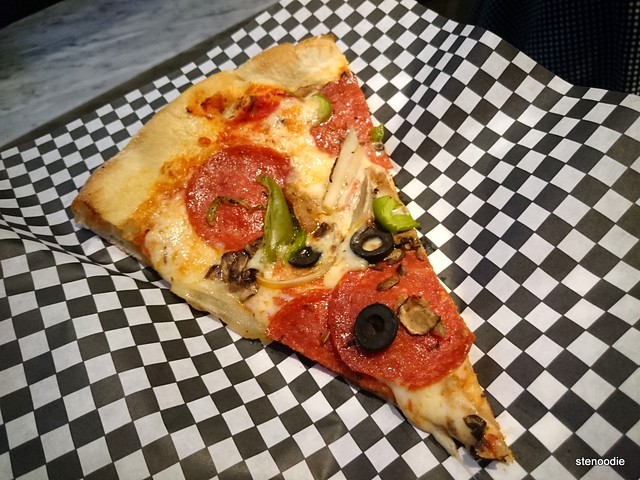 My slice of pizza! 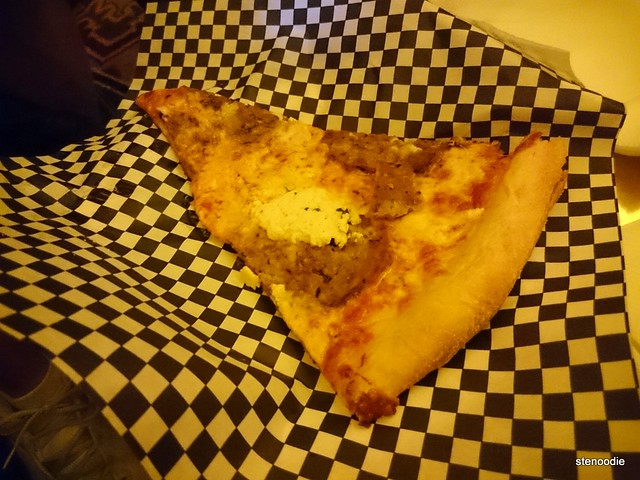 Some of the guys chose this one. It looks like mostly cheese

After we got our slices, we enjoyed them outside in the lobby of the Cosmopolitan Hotel.  I found that the pizza was pretty good.  However, I found that it was a little salty (even for me!).  I think that Secret Pizza is a really creative and fun “hype” restaurant.  I think it would be cool if it was a sit-down restaurant instead and actually had over-the-top delicious pizza.  I was a little disappointed with the pizza to be honest but loved the visit because it was really fun and unique! 🙂

Have you been to Secret Pizza before in Las Vegas?  What was your impression of their pizza slices?