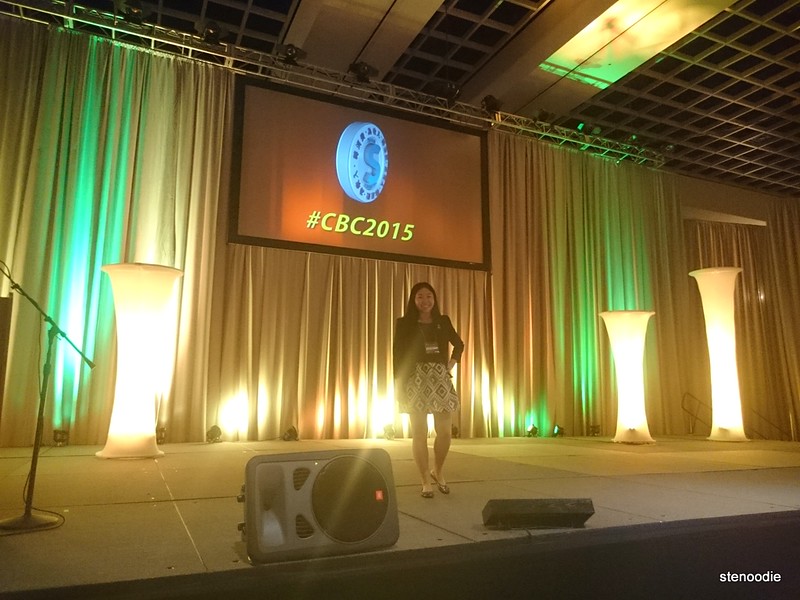 My second CBC in Las Vegas 🙂

Back in June of this year (June 20), I went to Las Vegas for the second time for business and pleasure.  Yay!  It’s so amazing to be able to travel to so many places to do productive work, learn with others around the world, and see things that you normally wouldn’t when you’re at home.  Love travelling!

This year’s Las Vegas adventure started with me blogging frantically at home to get three blog posts done and scheduled so that they would automatically go up during the time that I would be away (I’m a blogging nerd).  I then had to continue packing before leaving at 3:55 a.m. to get to my partner Juliana’s condo so that we could get to the airport before 5 a.m.  There weren’t a lot of people there at this hour on an early Friday morning. 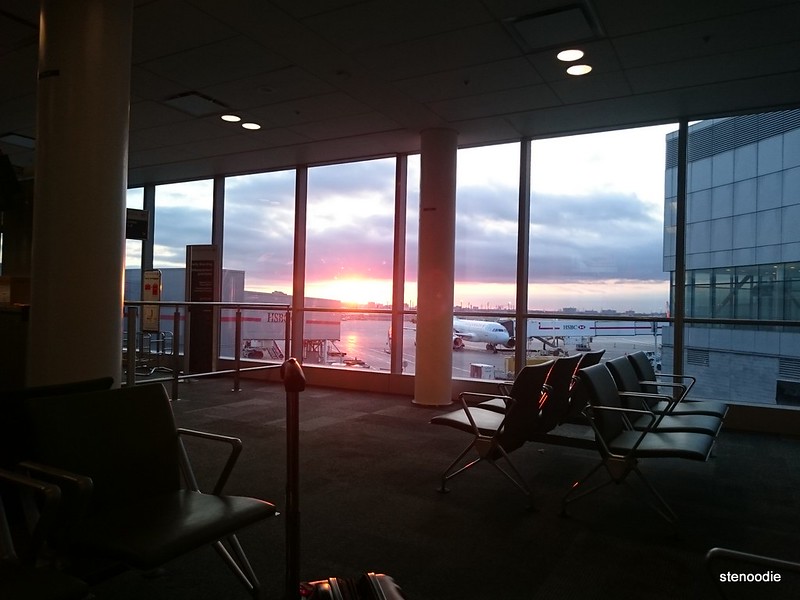 After Customs, we settled into the F68 boarding area where the sunrise was streaming beautifully into the lounge.  We were travelling with a handful of others too but their flights had unfortunately been rescheduled to the later 12:30 p.m. flight.  That meant that Juliana and I were the first to arrive in Las Vegas (and get lots of time to explore and eat!  Yay!).  It was ironic because Juliana and I were supposed to get there the latest but we ended up getting there earliest. 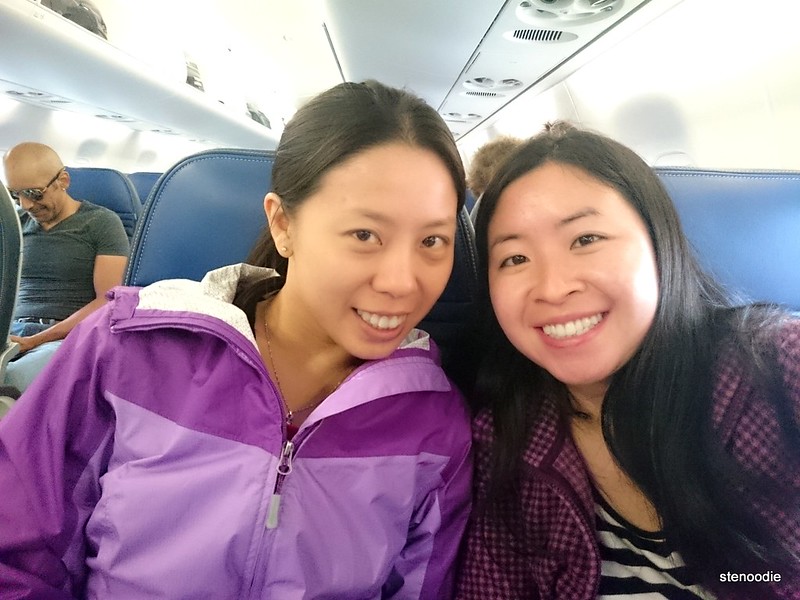 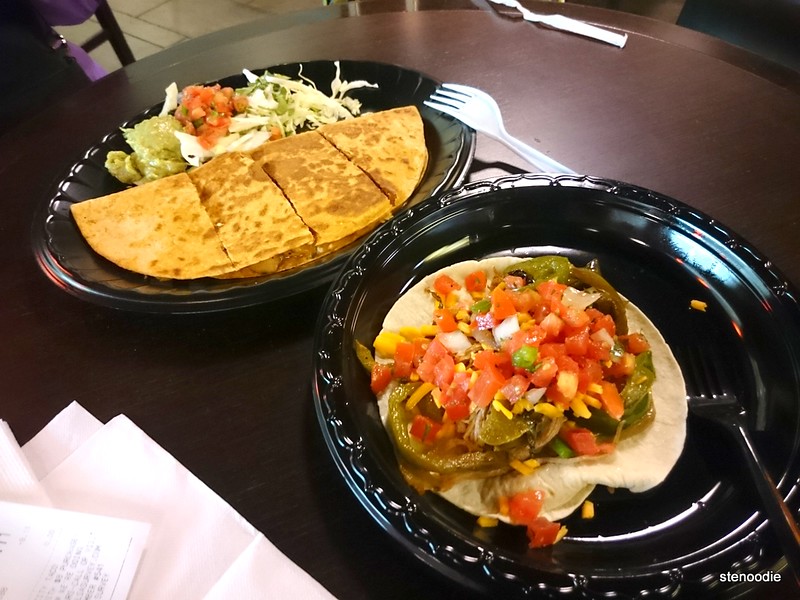 We had a connecting flight in Houston.  Since I had had only a breakfast sammie from Tim Hortons early in the morning, we ordered some food from the eateries at the Houston International Airport.  I ordered some Mexican food and we almost missed our flight because we treated the flight departure time as the boarding time instead. :O  We dashed towards the boarding zone just as the last couple of passengers were boarding.  Juliana and I were quite thankful and in shock that we had almost missed our flight!  Thank you our guardian angels and Buddha for looking out for us ^_^. 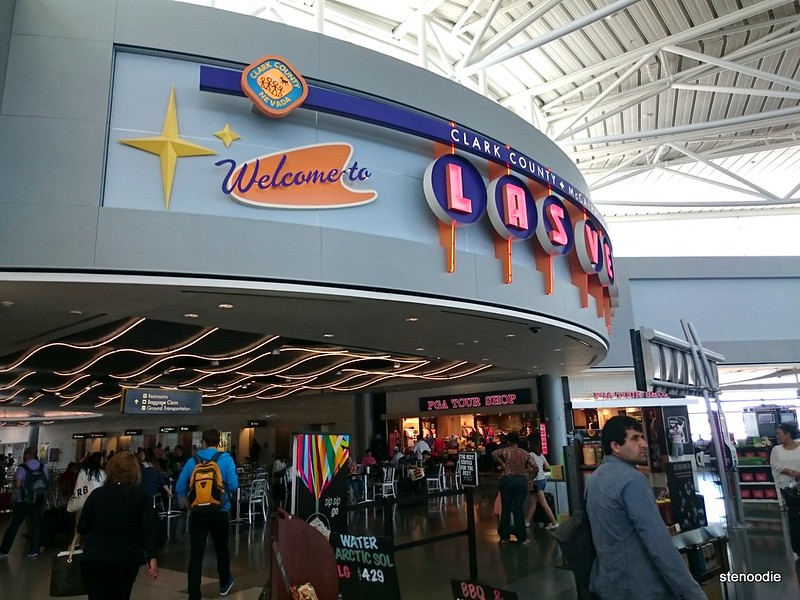 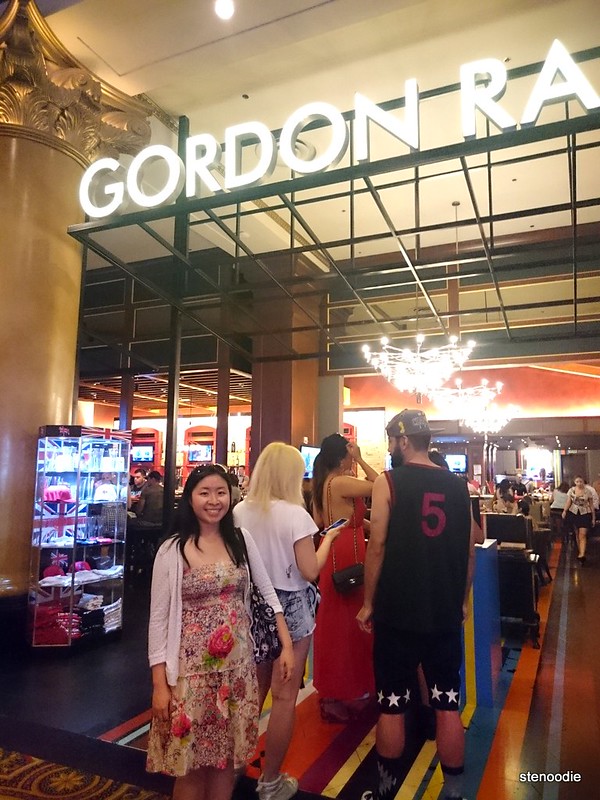 From there, we flew to Las Vegas.  It was quite hot outside as expected for the dry desert heat in Vegas.  Just like the year before, we bought a ticket to take one of the shuttle buses to our hotel.  After checking our luggage into Ballys Hotel (our other friends who we would be rooming with hadn’t arrived), we went in search of food.  We went to Caesars Palace and came across Gordon Ramsay’s Pub & Grill which was having a happy hour special where food was only $5 or $7.  It was very good!  I was so impressed with everything and even how the manager came to see if everything was good.  (Check my blog post about the experience.) 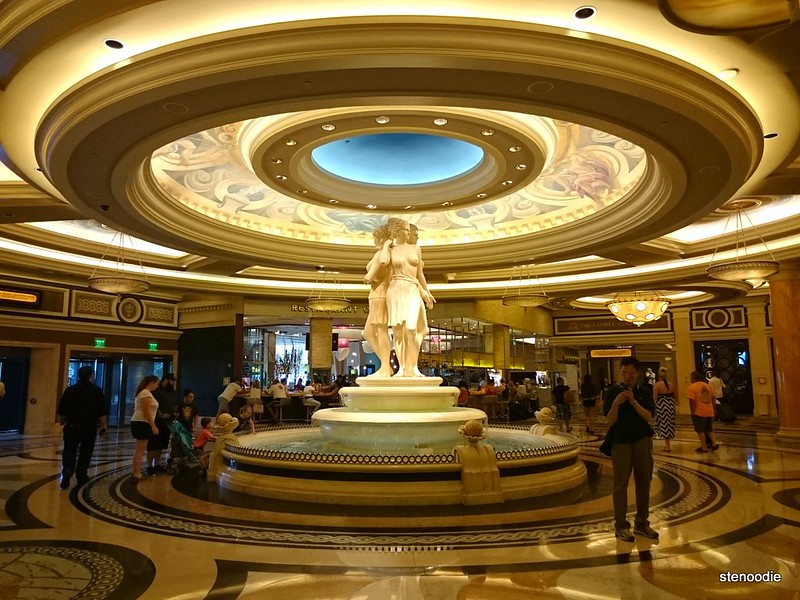 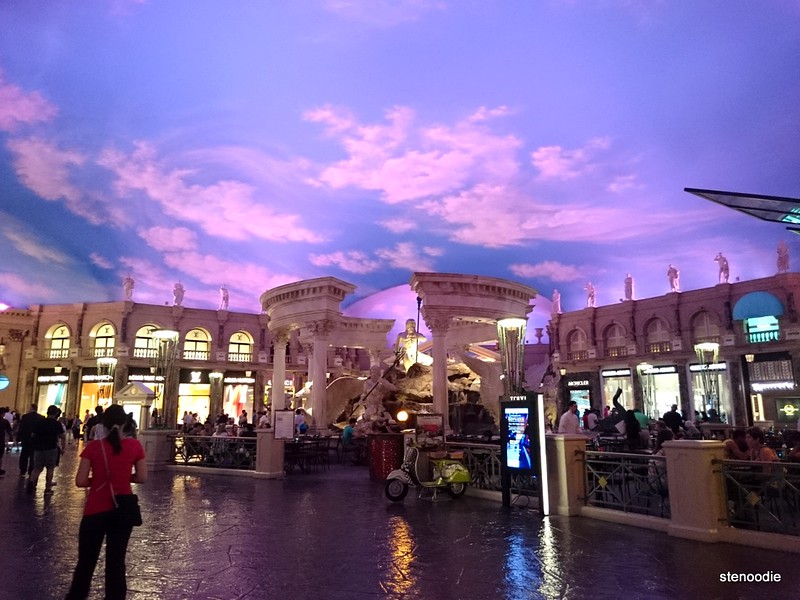 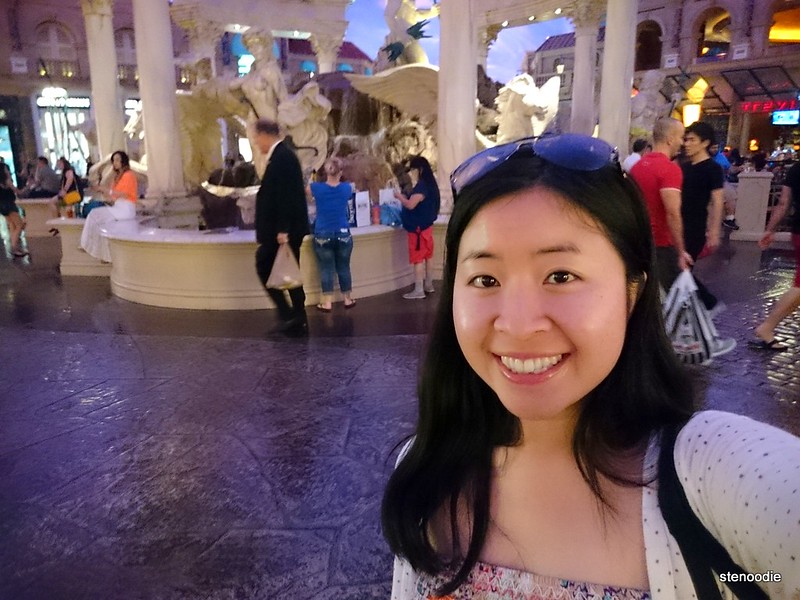 My skin looks surprisingly good after more than 12 hours in the air :3 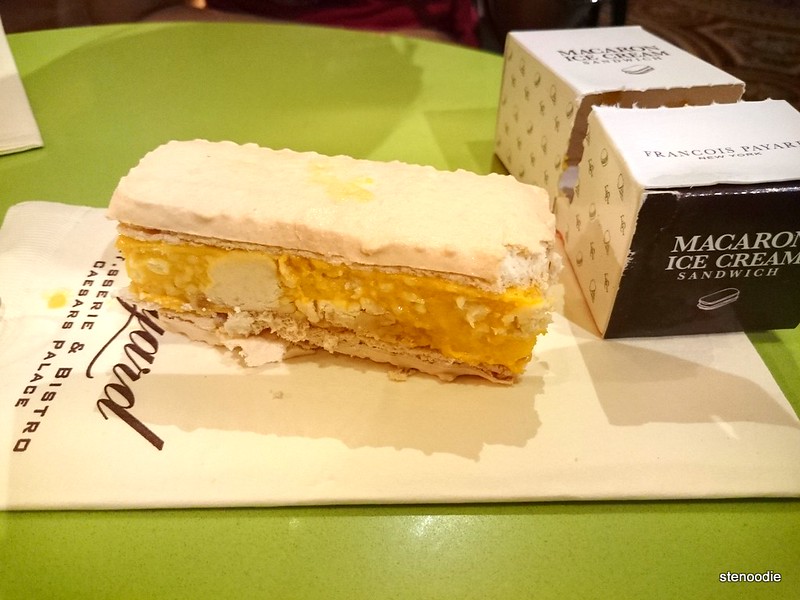 Afterwards, we walked around a bit and decided to have dessert at Paynard Chocolates while we decided on where to meet our arriving friends.  We took a look around the chocolate boutique and settled on sharing a ice cream sandwich instead.  I sampled their Deulce de Luce Gelato and found it very creamy and rich.

The passion fruit cheesecake ice cream sandwich was pretty good but not amazing since it came pre-made in a box. 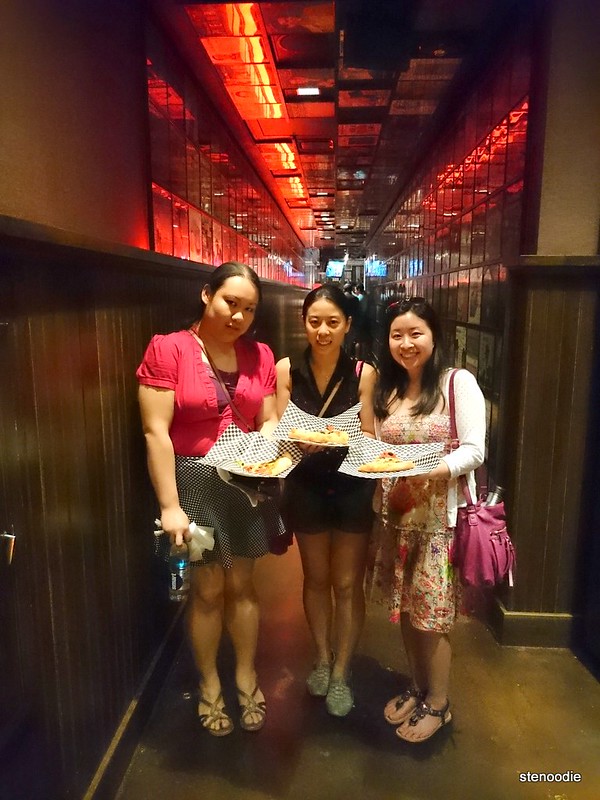 In front of the Secret Pizza tunnel with our pizzas!

After that, we went to meet up with the guys in our team to register for the Chinese Bootcamp and get our materials and translation devices.  Then we went in search of food for the secret pizza place at Cosmopolitan Hotel since two of my friends highly recommended it to me to check out (word of mouth is incredibly powerful!).  It’s secret because it’s unlisted and after walking through a long tunnel and lining up, you can order a slice of pizza or an entire pie (it takes 25-30 mins).  We each got a slice of pizza to try .

That was our pre-dinner.  We went to Hash House A Go Go right afterwards and we had huge plates of dessert there to share in our group of 7.  We had Andy’s Famous Bread Pudding, Sugar Banana Pancakes (house favourite), and strawberry shortcake.  Each portion feeds four people so it was a lot of food that fed us all.

After that, my big food adventure day finally came to an end.  We walked back to Ballys where we were staying and went out to get a case of water for our group.  I also got coconut water to replenish the dehydration caused by the dry desert heat.  I guess that would have been the last thing I had that day.

I was so thankful for the day.  It was an intense foodie day where I ate all day long and relaxed and acted an a tourist.  It was fun!  Tomorrow was a long day of learning that I looked forward to a lot.  🙂 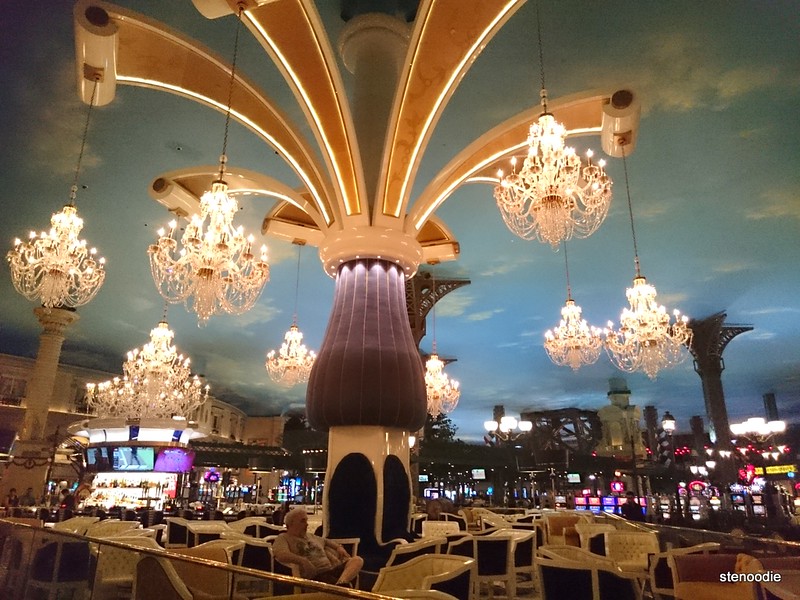 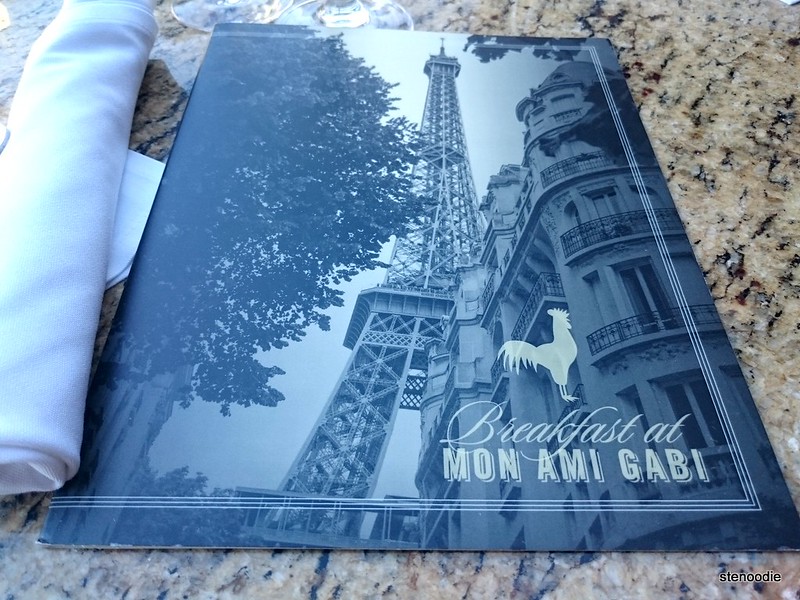 The next morning, we woke up super early in order to get ready in time for breakfast at Mon Ami Gabi before our first day of training.  We were actually so early that we arrived at the doors before the famous French restaurant even opened at 7 a.m.  Once it did though, we walked in and got seated at an awesome spot on the patio that overlooked the strip.  It was an amazing breakfast, not so much because of the taste of food but because of the view and the fact that we were having a nice breakfast together in Las Vegas.  Loved this! 🙂 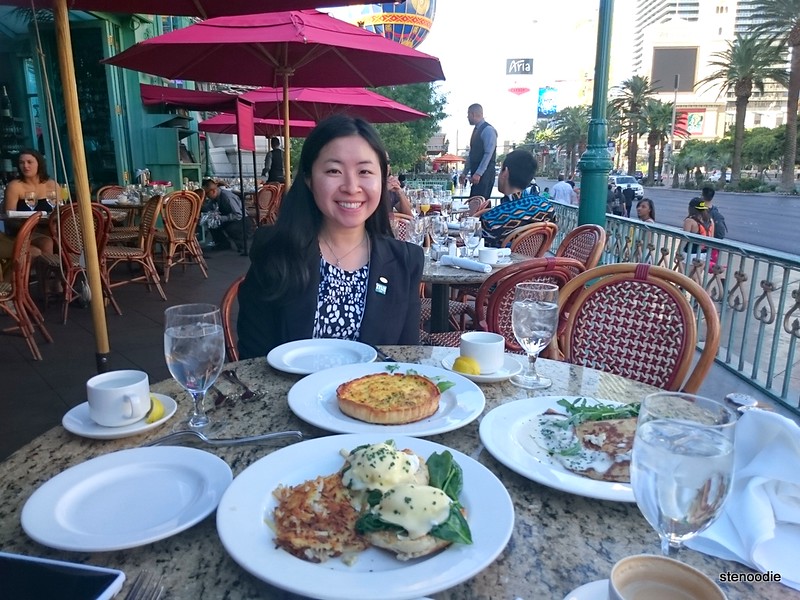 I really liked how this year’s training was based around a Basic 5 training instead of how speakers talked about various topics last year.  The translation for this year was also miles better than last year.  Kudos to all the hardworking translators who are able to get us the English translations from the Mandarin versions in realtime speech.  (Reminds me of realtime steno :P.) 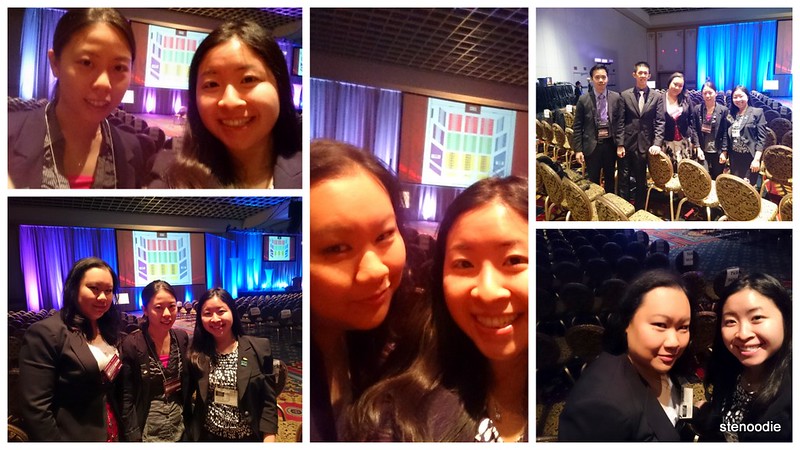 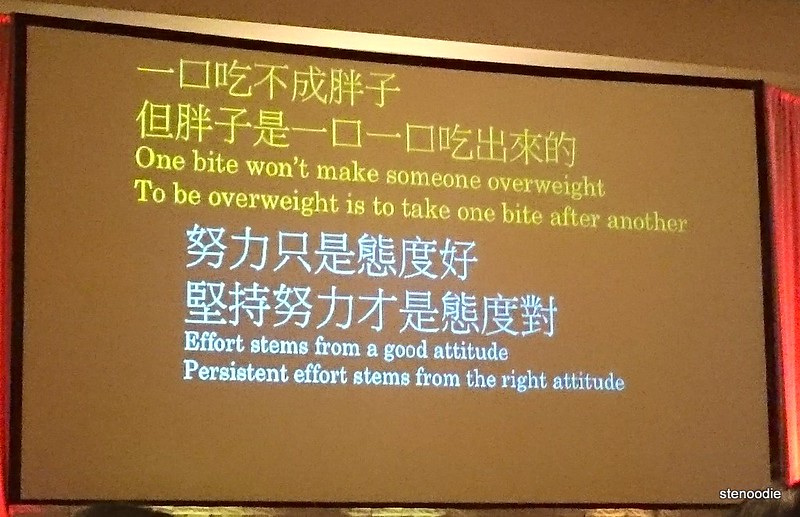 CBC has so many straight-forward and plain good advice 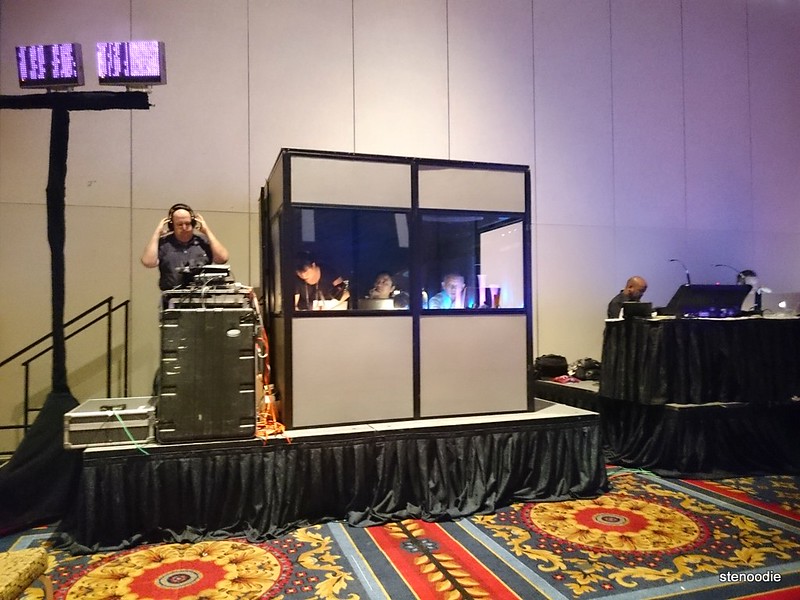 For dinner that night, we went to Cravings Buffet at the Mirage Hotel & Casino.  It was nice to eat together as a big group! 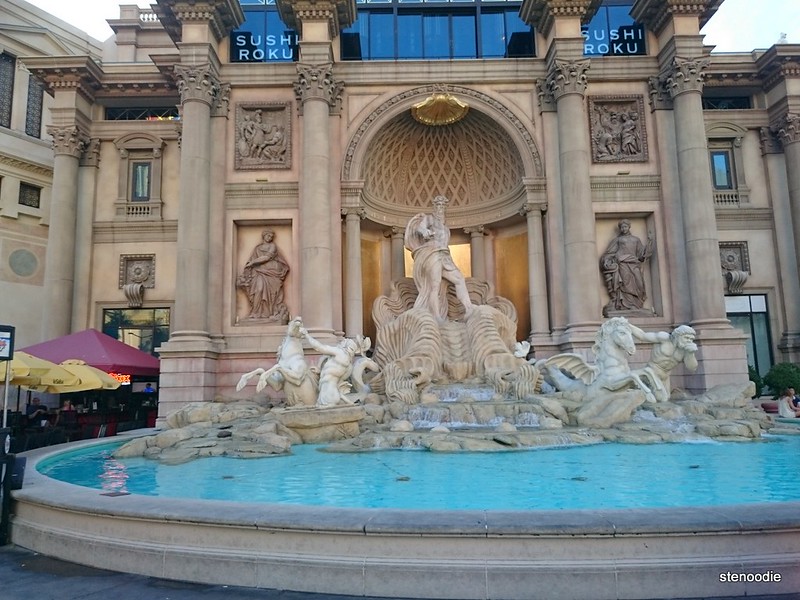 While walking to Mirage 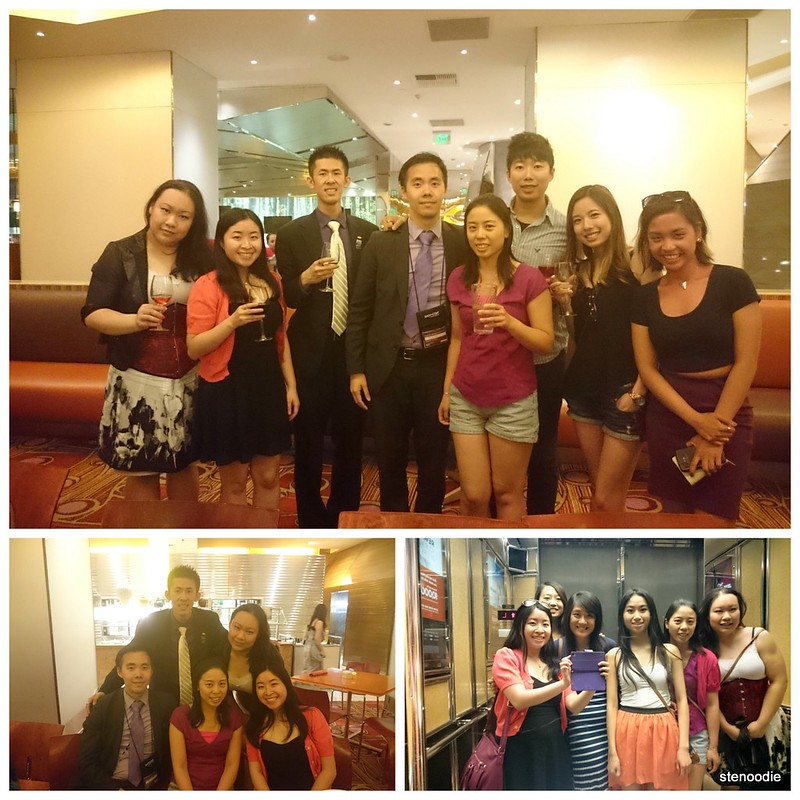 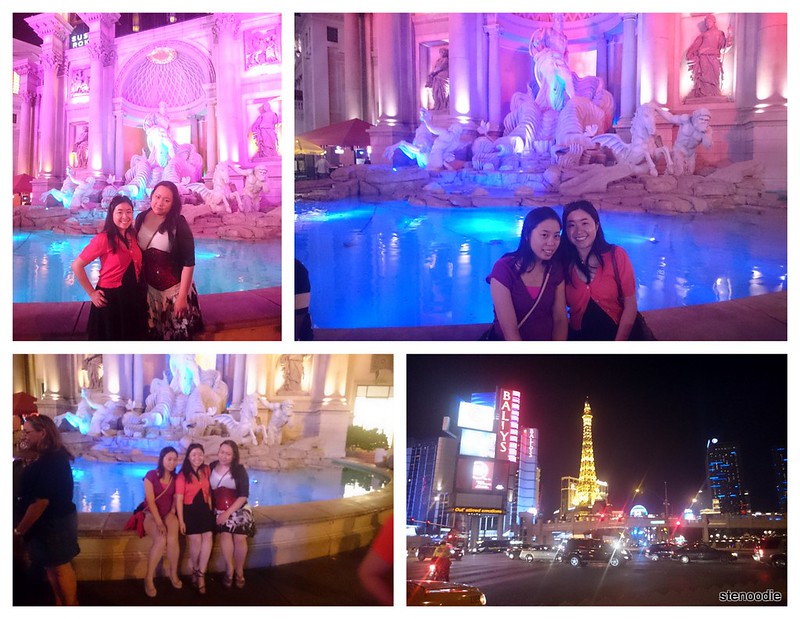 We took a picture with the fountain on our way back 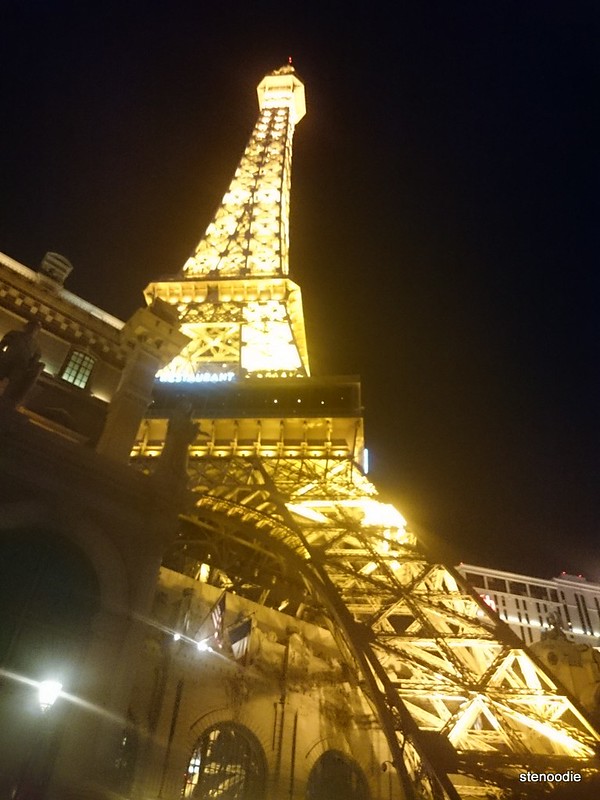 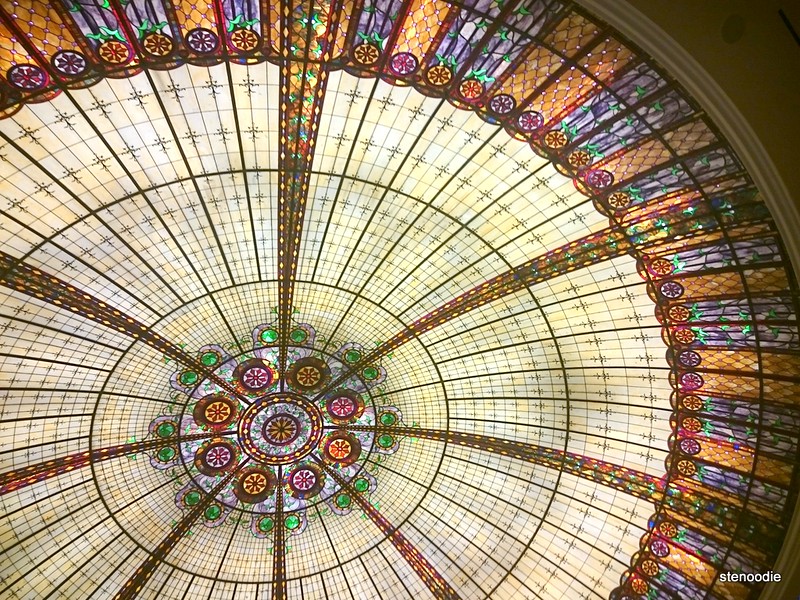 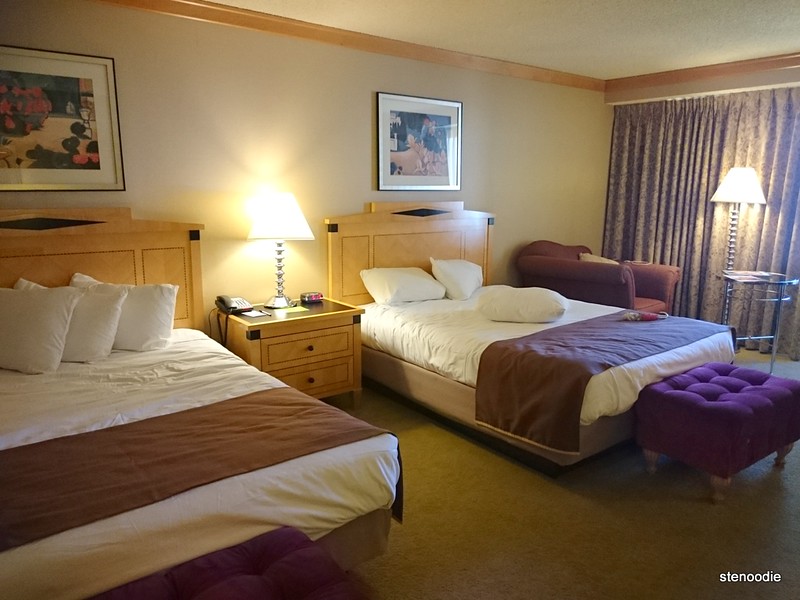 Our hotel stay at Ballys. Last year we stayed at the Paris Hotel! 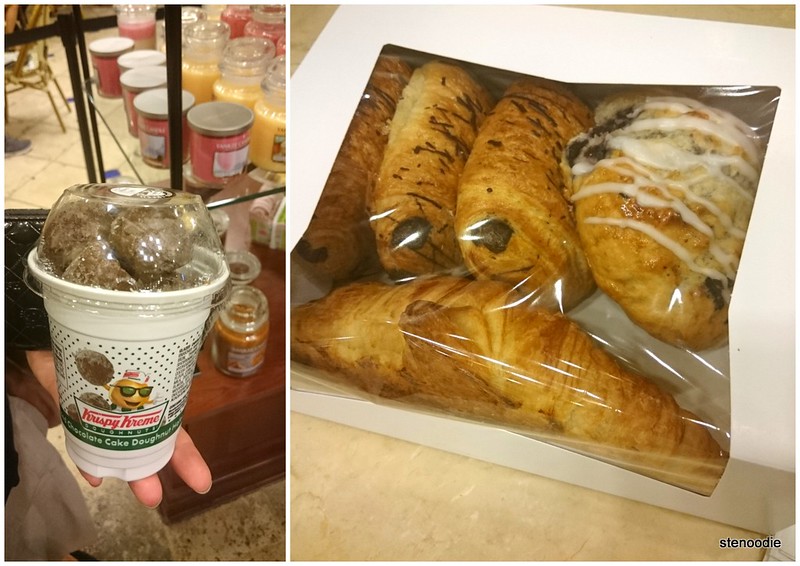 On the last day of Las Vegas (crazy how fast it went), we grabbed something simple for breakfast from Cafe Belle Madeleine, a cafe that I also got breakfast from last year.  We got some chocolate croissants!  Apparently, there were some delicious sausage croissants next door but we ended up going to Cafe Belle Madeleine instead (I’ll have to visit that place next year!). 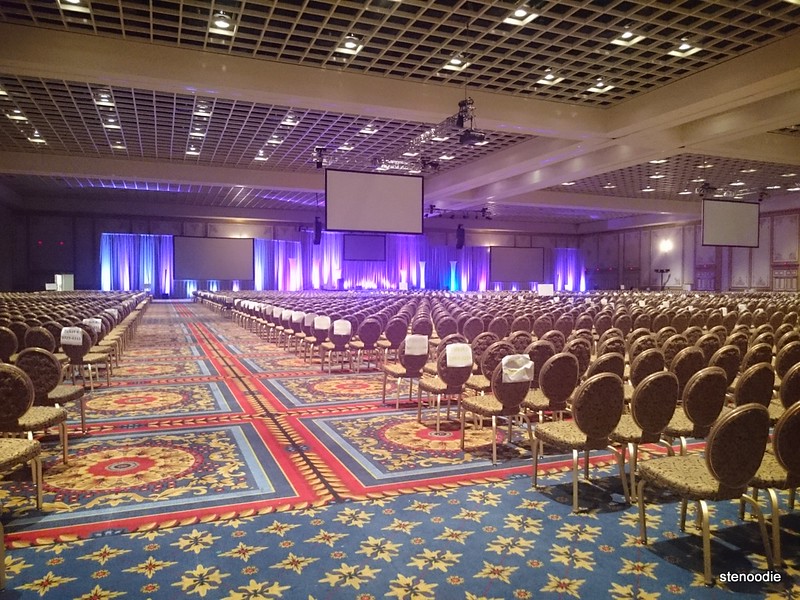 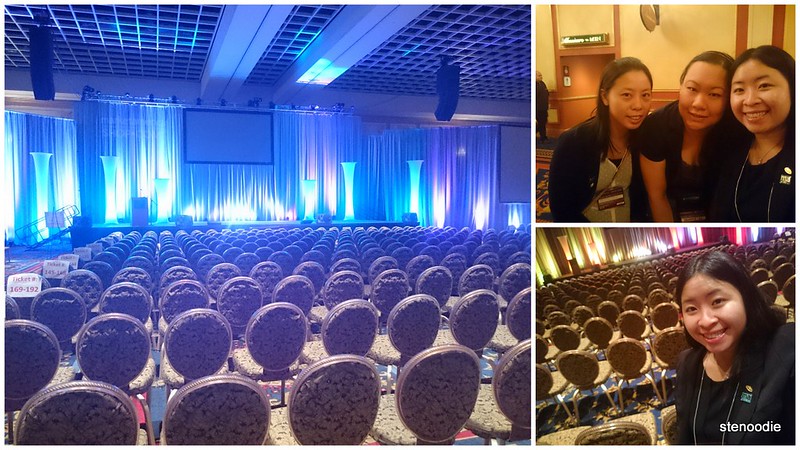 Second day of Boot Camp training was just as good as the first.  What an incredible time and place to be building our business!  There were so many more partners that attended this year than last year.  I couldn’t wait to bring more to next year’s!   For lunch, we had some crepes to share from Blizz Frozen Yogurt (I wanted to try them out after spotting them at the food court for lunch on the first day).  Unfortunately, they weren’t very good crepes and you can read in my blog post to see why.

Juliana and I had an early flight at night back to Toronto so right after the training ended and we finished off with a big meeting after meeting, we rushed to find a restaurant to eat.  We ended up at Sea: The Thai Experience.

And after that, we got our bags from our hotel room, waited for the shuttle bus back to the airport and back home we went! 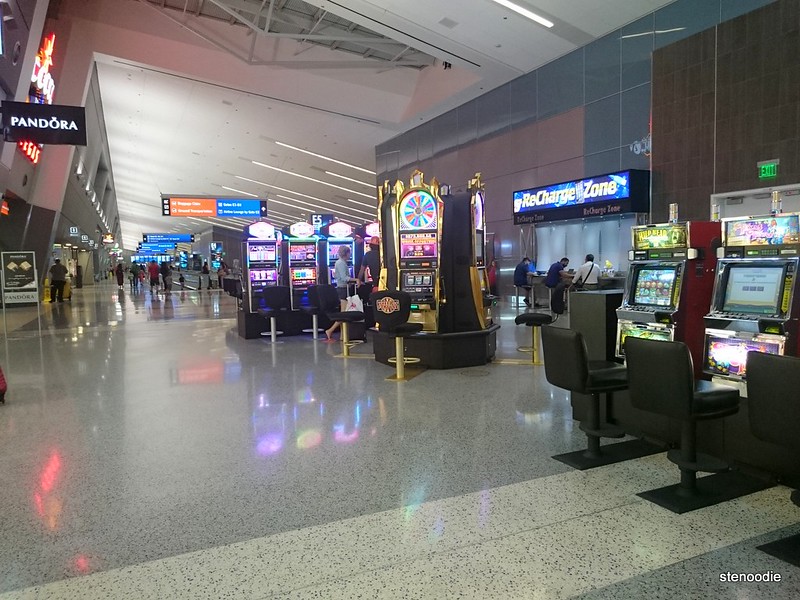 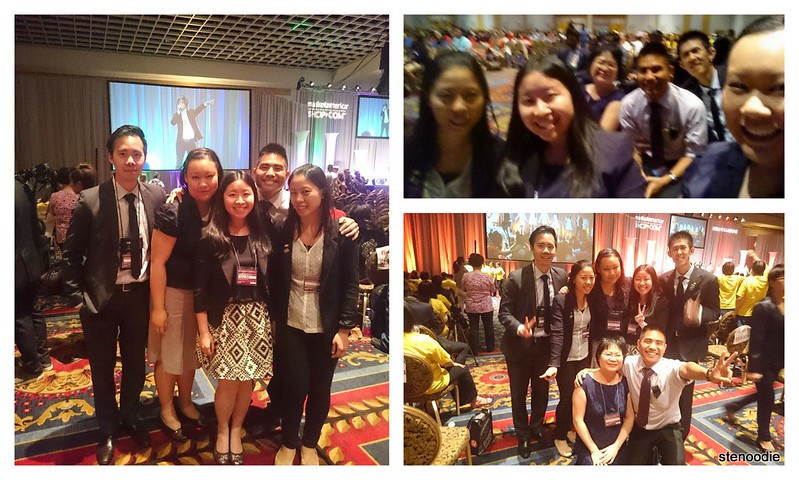 During this year’s visit to Las Vegas, I was a little disappointed that I didn’t get to stay an extra day so that I could scope out Vegas like I did last year.  I did it because when I originally booked my flight, I had agreed to fly with Juliana so that she could go back to work the next day and so she didn’t have to fly alone.  However, after seeing that a number of partners stayed an extra day to enjoy Vegas and I’m a sucker for travelling and new sights and sounds, I’m pretty much determined that I’m going to stick it out for an extra day next year if there are other people with me too.  Life is too short to just fly to a place and leave right away.  Make memories and live!  With that all said though, I was very very grateful to get the opportunity to return to Vegas again (I still couldn’t believe that a year had flown by so quickly).  The Boot Camp training this year was so well organized and the material was excellent!  It was a real highlight to learn from such distinguished mentors!  See you again in another 6 months, LV? 🙂 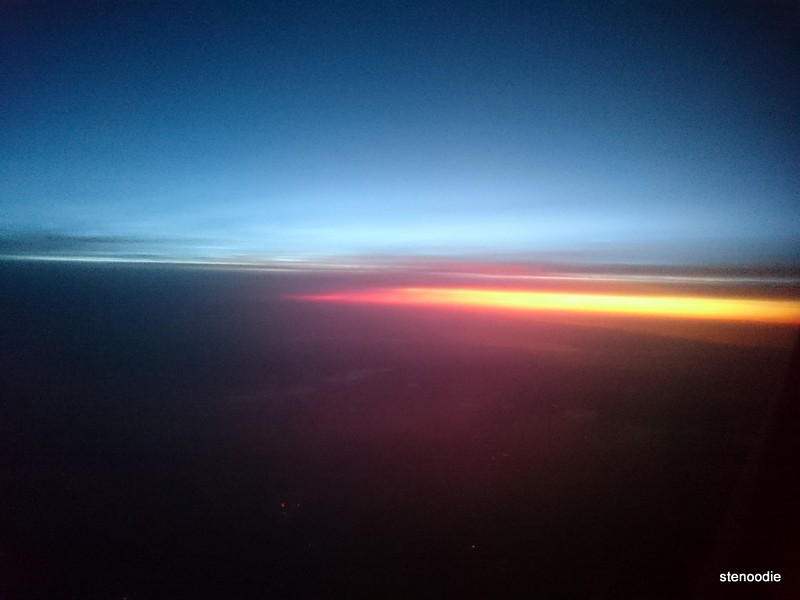 Looking out the window on the flight back