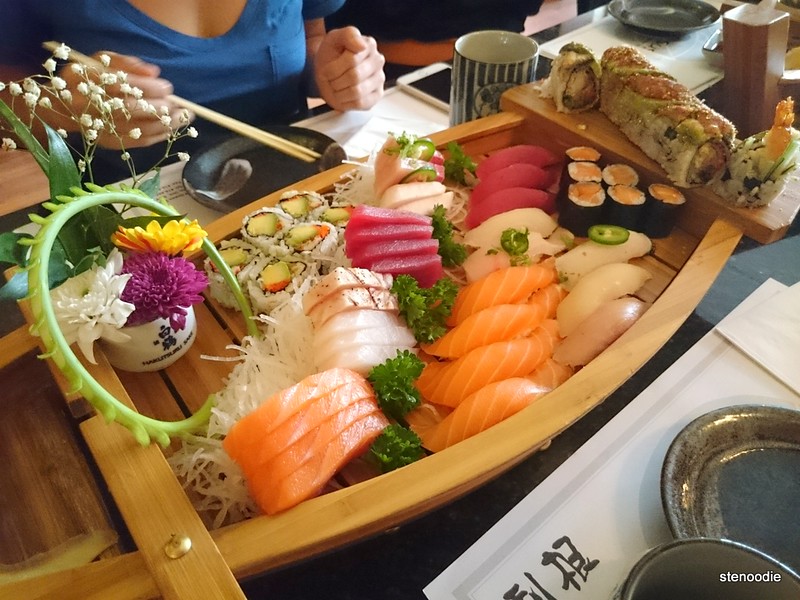 There is a group of friends that I haven’t seen altogether for a while.  For a mini reunion, we gathered at ToNe Sushi located on Queen Street West in downtown Toronto for dinner and to catch up.

It is difficult to miss ToNe Sushi as you’re walking on Queen Street because they have a big bold sign that announces their presence.  We were a big group of 12 people and we sat cozily at a long table. 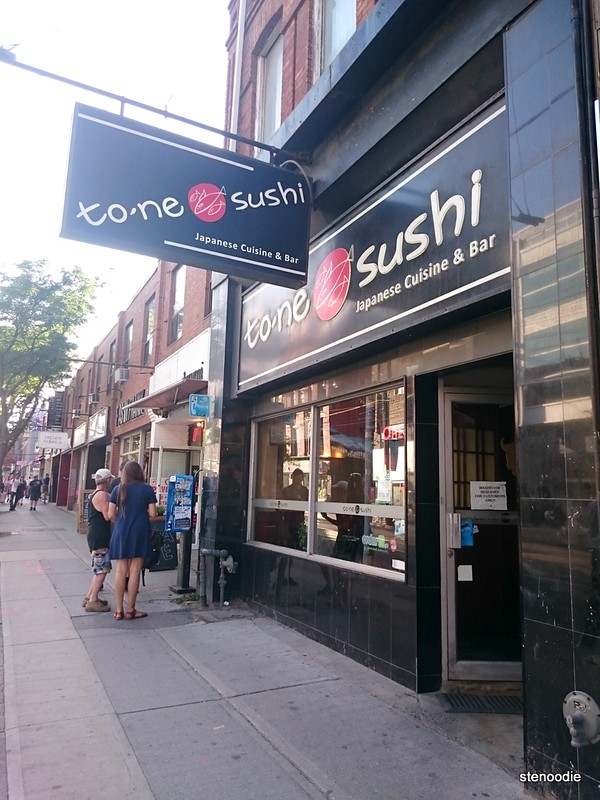 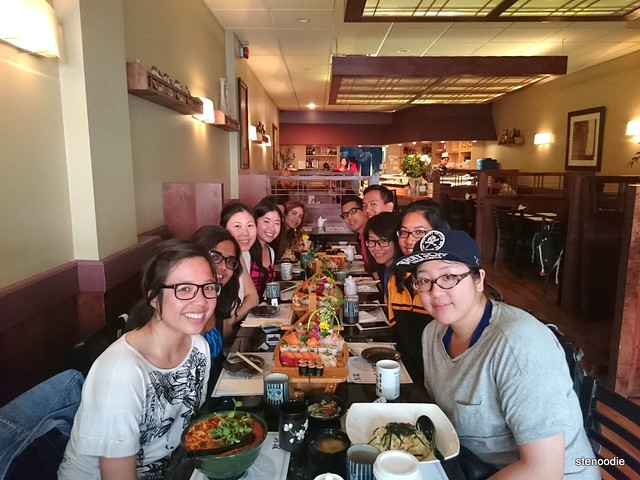 Despite being a large group, I really enjoyed the service that they had here.  The servers were friendly, fast, and efficient.  Two of them had big clear name tags — Tim and Joy.  They did a great job serving all of us that night! 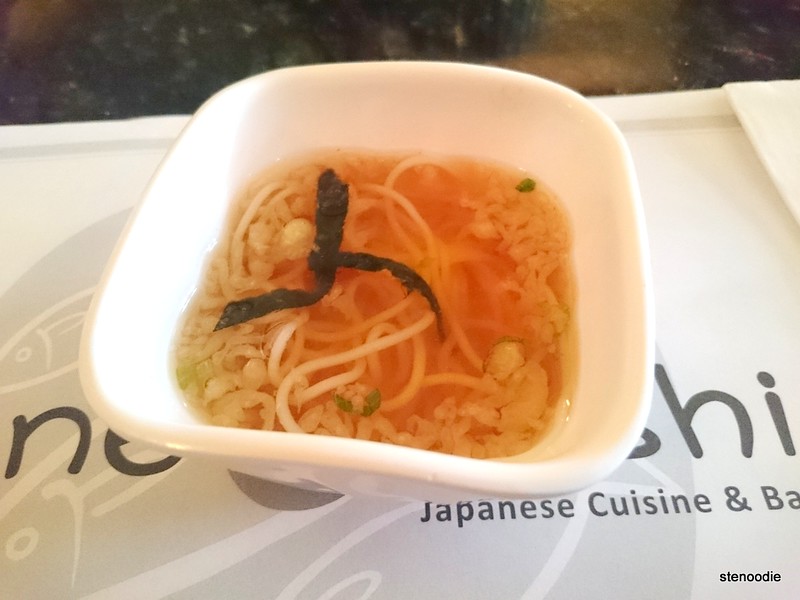 “Crunch Noodle Soup” — it was pretty good! It had noodles and tempura crisps

Ai, Pat, and I decided to share a small Sushi & Sashimi Combination Boat.  Oh, man, it’s been a while since I had a sushi boat!  They’re awesome and great to take pictures of. ^_^  We also ordered a Black Dragon Roll to share.  I miss these foodie friends!

It turns out that our table ordered two of the same combination boats so our table was jam packed with sushi and boats!  The presentation of everything looked incredible.  Lots of cameras and phones ate the first food before we did. XD 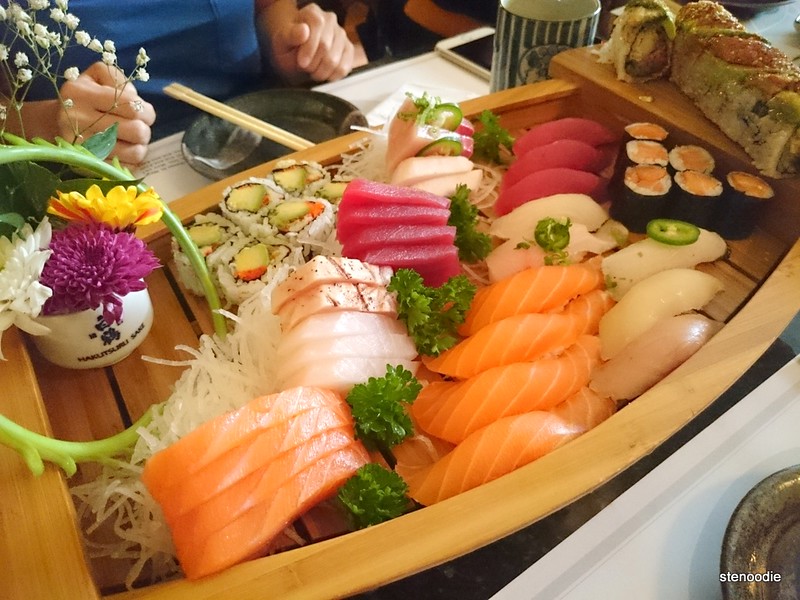 Our Sushi & Sashimi Combination Boat contained 40 pieces — 16 pieces of assorted sashimi, 12 pieces of sushi, and 12 rolls.  Yum!  The chefs were smart and actually put the Black Dragon Roll on the “stern” or “bow” of the boat to save space.  Doesn’t it just look fantastic? 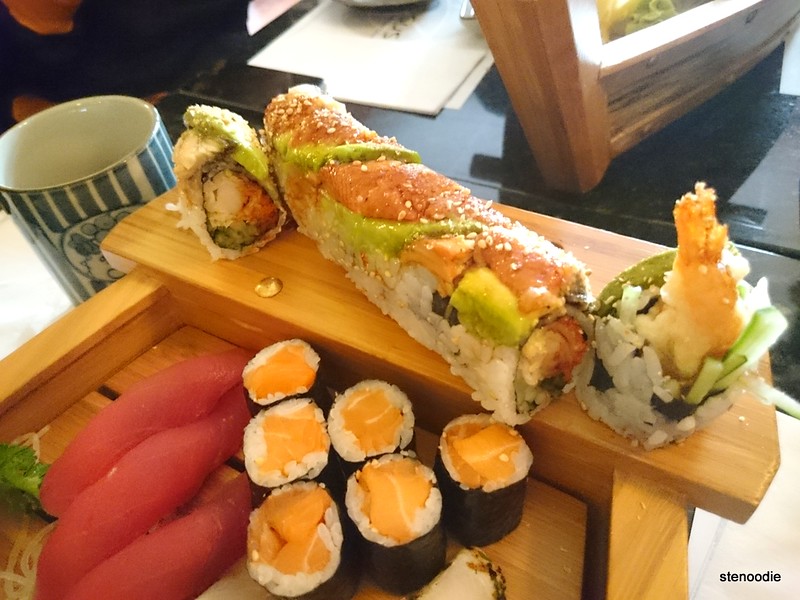 Here’s the picture of the other boat too.  They had a centrepiece in theirs lol. 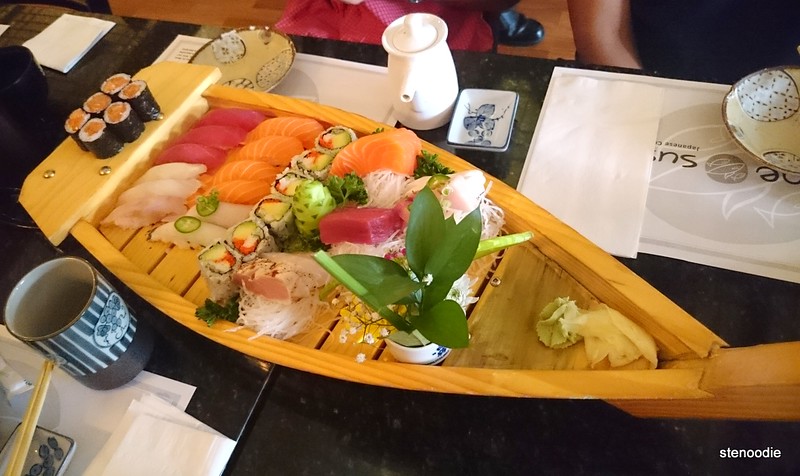 Oh, I was so impressed with the food after we started eating.  The sashimi was so fresh and cold!  I dislike it when sashimi is room temperature or warm; it just isn’t right!  The sashimi was also very generous in portion and meaty.  The salmon sashimi was firm and a big chunk!  They definitely didn’t skimp out on their sizes here.  The white pieces of sashimi also were so good that they literally melted in your mouths.  We were so impressed! 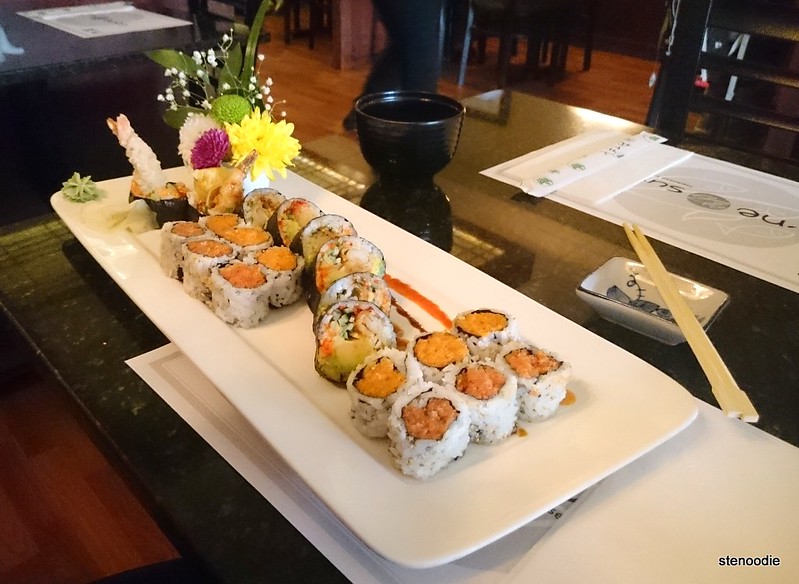 Similarly, the sushi and rolls were just as good.  The salmon roll, although simple, had a really big chunk of salmon in it and the seaweed that they used to roll up the sushi was flavourful — this is rare.  Sometimes, you can’t taste the seaweed or it just tastes like paper.  The California Roll was also great because the big chunk of avocado was so smooth and fresh — its creaminess made the entire roll blend its flavours together so well.

Their ginger was pretty good — Pat ate a lot of these!  Their wasabi was very soft and not spicy at all.

The Black Dragon was also a winner.  It was topped with unagi and avocado on top with shrimp tempura, cucumber, and masago in the inside.  It was nicely made and SO delicious!  Yum!  It was a great choice.

After we finished our boat, we were actually still feeling a little hungry so we ordered one last roll to share, the Sunrise Roll.  It was a big roll with 9 pieces and its ingredients were impressive too: shrimp tempura, avocado, cucumber, cream cheese, and crab meat on top. 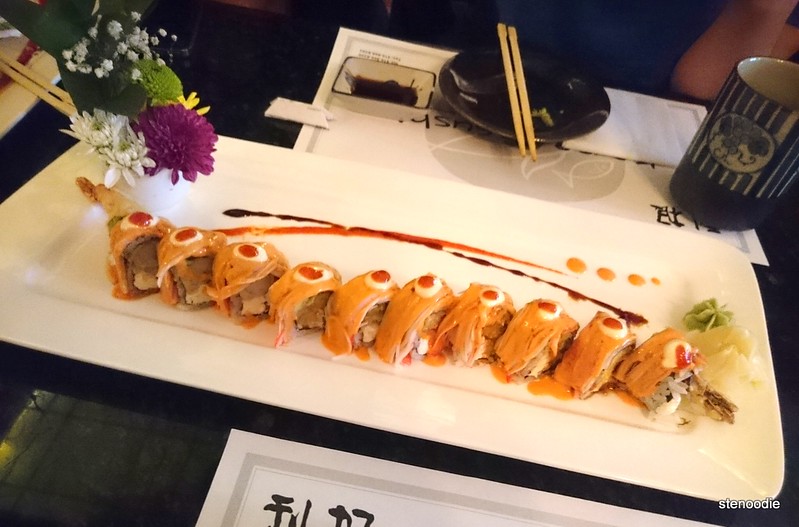 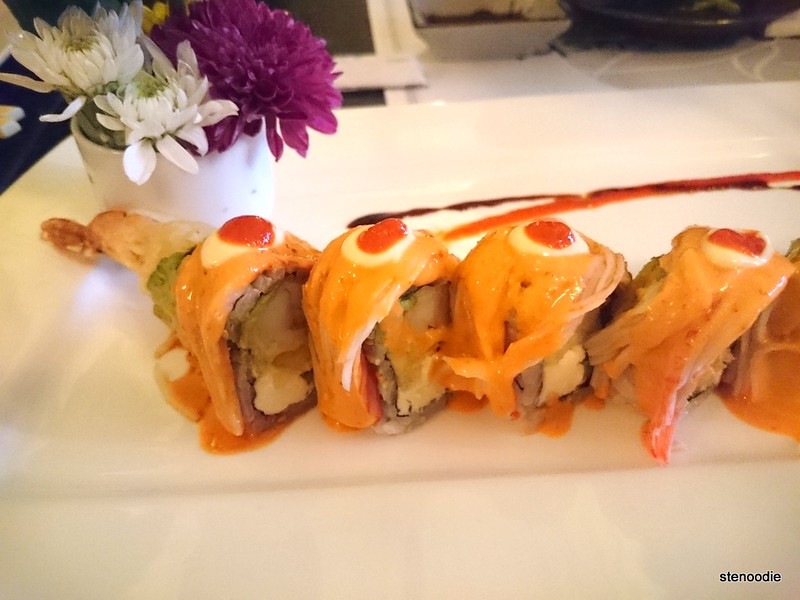 It definitely delighted us when it arrived at the table.  It was a long snake of rolls with some fun designs on the plate and their signature flower decoration on the side.  What distinguished this roll from other specialty rolls is that there is a slice of crab meat draped over the top of each roll with the mayo and unagi sauce in what looked like a bullseye target.

Oh, man, this was an explosion of flavour in the mouth.  It is hard to describe it it as there was so many textures and flavours going on — the crispiness of the shrimp tempura, the creamy avocado, the crunchy strips of cucumber, the smooth cream cheese, and the flavourful crab meat.  This roll was kind of chosen at random but it turned out to be such a great choice.  I highly recommend this roll if you like strong infusion of flavours! 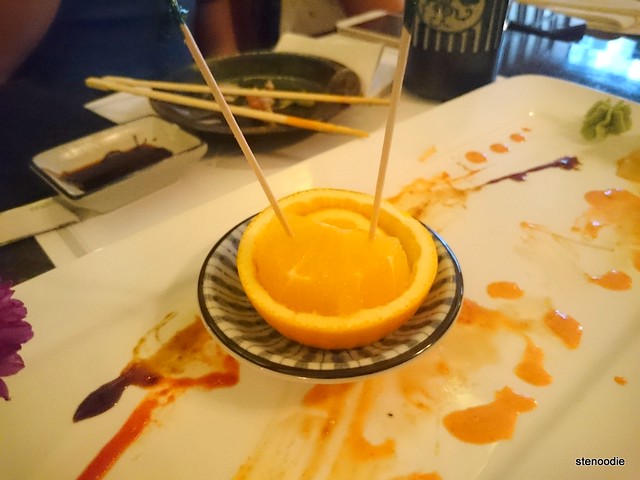 We were served orange sections as dessert

Diana and I left shortly after dinner to go for some dessert!  All in all, I was highly impressed with ToNe Sushi and a bit surprised that I hadn’t discovered them prior.  You should check this restaurant out the next time you want some sushi! 🙂 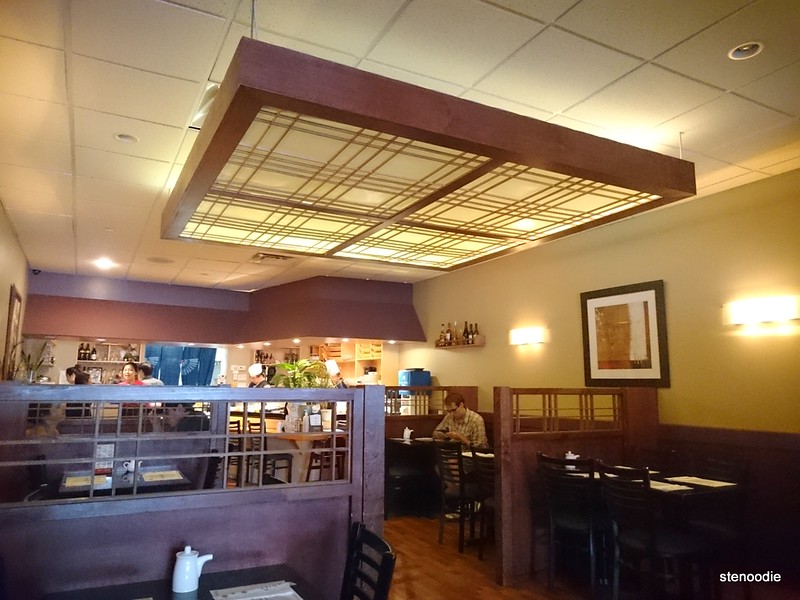 ToNe Sushi is worth checking out! 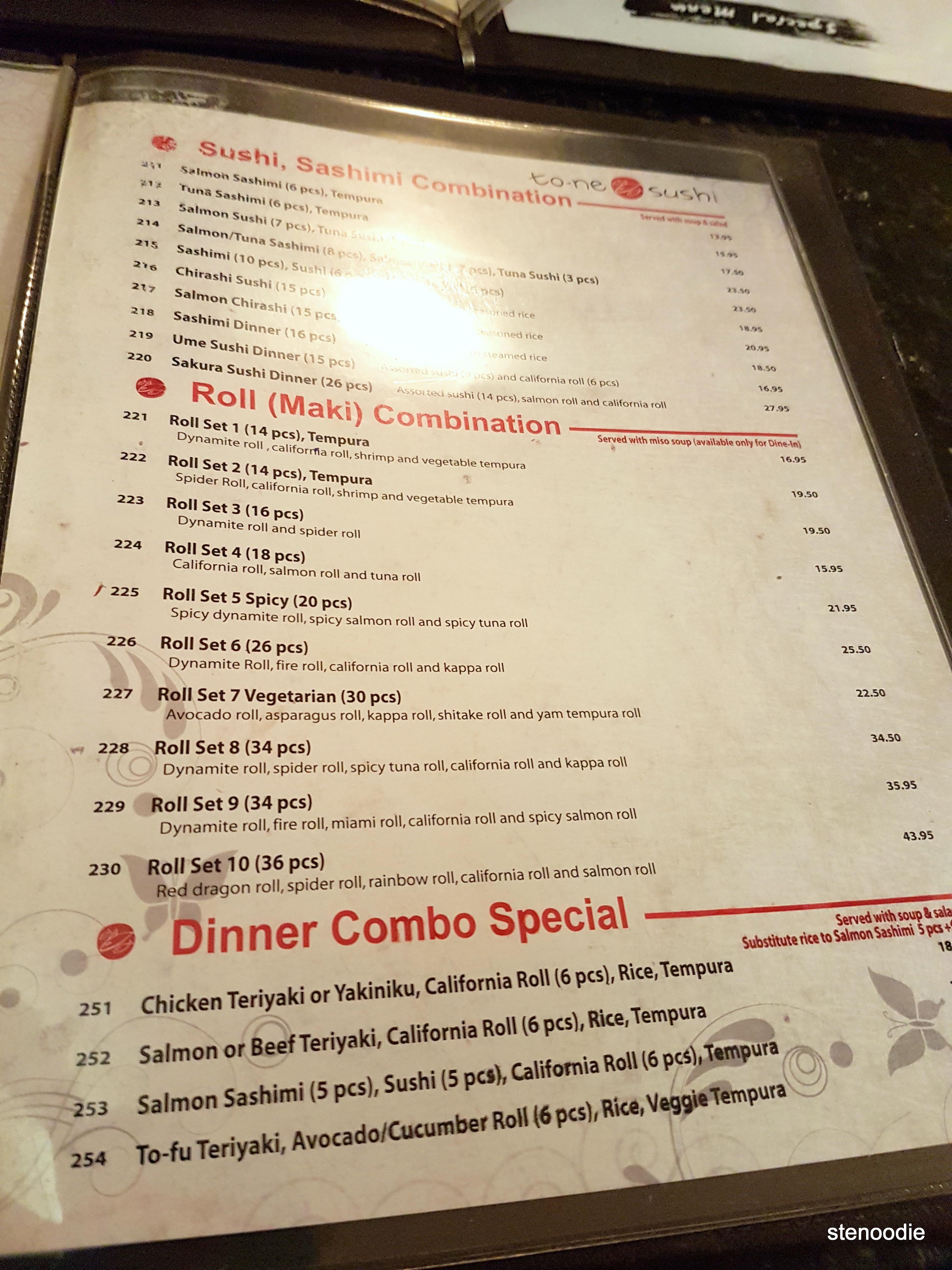 December 1, 2017:  Guess what?  I returned back to ToNe Sushi after two years! 😀  A cold night in Toronto proved to be a sushi kind of night and after not wanting to wait in line for a table at another Japanese restaurant, we came here for dinner (I had such fond memories of this place as you can view from the review above).

On this Friday night, we were lucky to get a spot just after 7 p.m. despite the restaurant being nearly full already.  I already knew I wanted to order sushi so I got the Roll Set 5 Spicy combo (the same one that Diana got years ago).  Ken ordered the Roll Set 2 (14 pcs) with Tempura.  Our eyes were bigger than our stomachs and because we were hungry, we also ordered the Chicken Katsu and Edamame for starters too.

We were first given a bowl of miso soup and “Noodle Crunch Soup” each to start.  Ken was impressed that we had the later bowl of soup too and how big the first bowl was.  I liked the Noodle Crunch Soup just as much as I did the first time around. 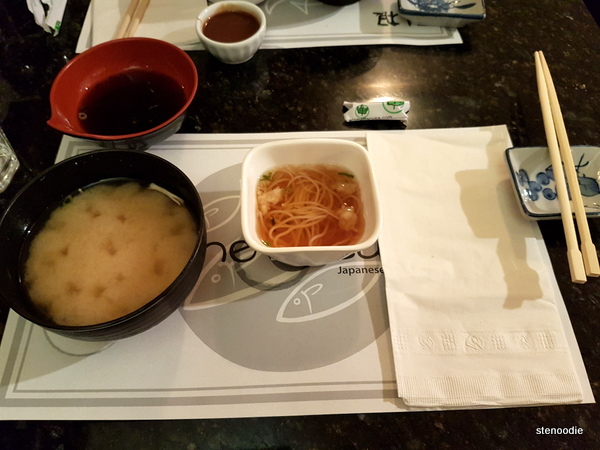 Unfortunately, in my mind that day, I thought the “Chicken Katsu” was the same thing as chicken karaage but obviously that was not it.  Thus, it was katsu — thin strips of chicken fried.  It was just okay to me; I liked the plum sauce that came with it though. 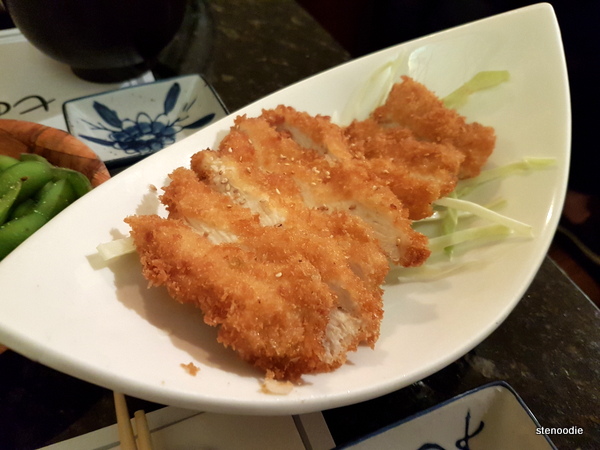 The Edamame was average. 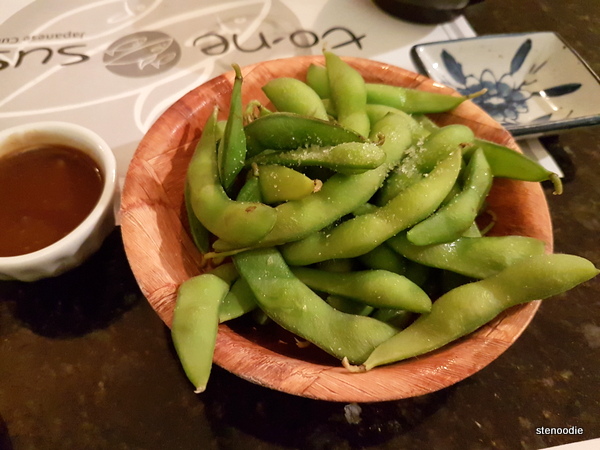 Since the server knew we were sharing our food, both of our roll sets got combined onto one plate.  I love the presentation of food here!  Also, their service was really good; the female server was so friendly and smiley.

The plate of our sushi rolls looked so good.  Just as they did two years ago, they still serve their sushi platters with a sake cup of fake flowers. 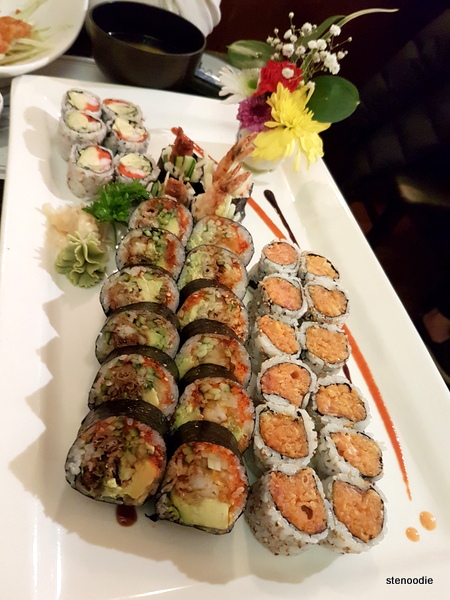 Mmm, the sushi was good.  I was reminded on this visit of how good the ratio of rice to fish is.  There was barely any rice seen in the rolls!  This was really nice.  I enjoyed satisfying my craving of sushi rolls.  I ended up really enjoying the California roll in Ken’s roll set more than the ones I had since the California roll tasted cleaner.  By that, I mean that it was more simple flavours and doesn’t have too much overflavouring.  The Spider Roll was surprisingly just okay to me; it was a little hard. 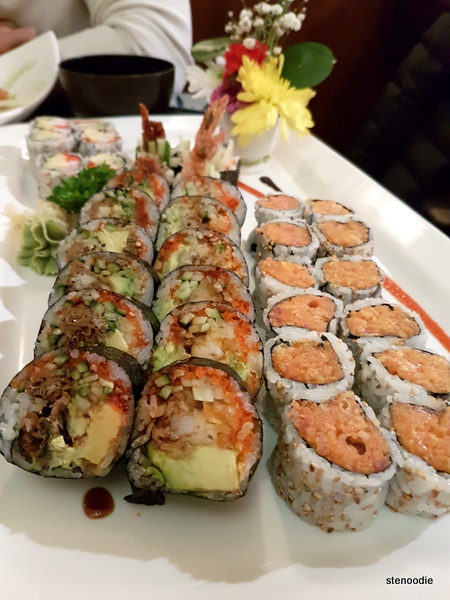 The shrimp tempura and vegetable tempura were good.  I really like broccoli tempura. 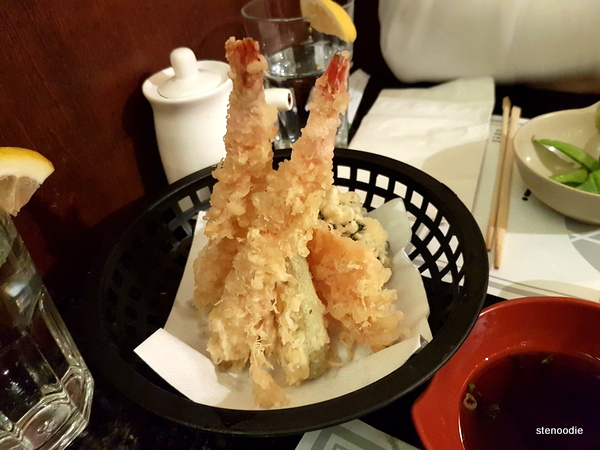 Shrimp and vegetable tempura as part of Roll Set 2

We finished the meal again with some sliced oranges in Japanese style!

Yay for a great return meal here at ToNe Sushi!  I know this is a solid spot for sure now.