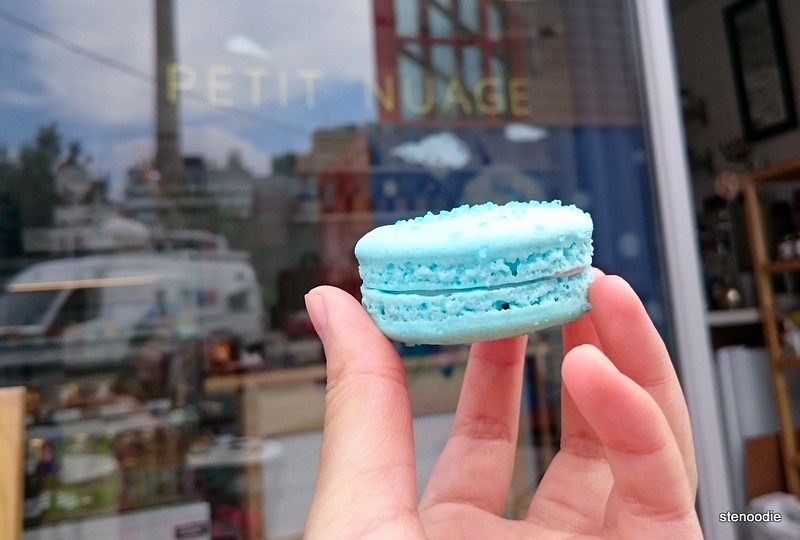 This was my first time to Market 707.  It is a cluster of shipping containers in downtown Toronto near Bathurst and Dundas that are used as small shops.  I didn’t know something like this existed in Toronto because I found it super neat and unique!

Petit Nuage is one of the shipping containers at Market 707.  It is literally a small shipping container where there is just enough room for the shop owner, a counter with sinks, a fridge, a small display case of goods and that’s it.  Steph Lao, the owner and founder of Petit Nuage, decorated the little space so nicely so that it highlighted more of the classy and cute flair than the small space. 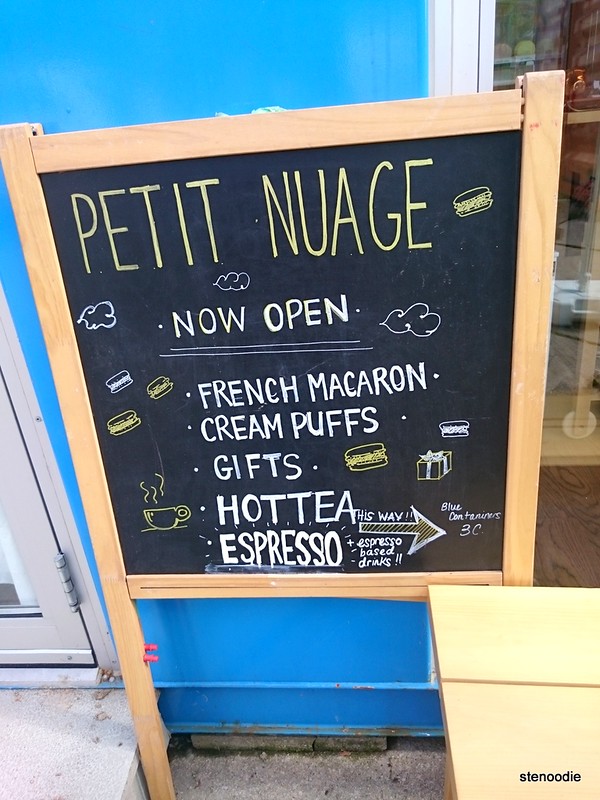 Love the detail that’s put into this micro-cafe

When Nicole and I got there, it took us a few minutes to find Petit Nuage since it was a couple steps to the left of the big sign that says 707 Dundas West.  When we did find it, there was a note posted on the glass door that Steph was out to get ice and would be back at 3:30 p.m.  Nicole and I took this time to walk around the other containers to see what else was around the area. 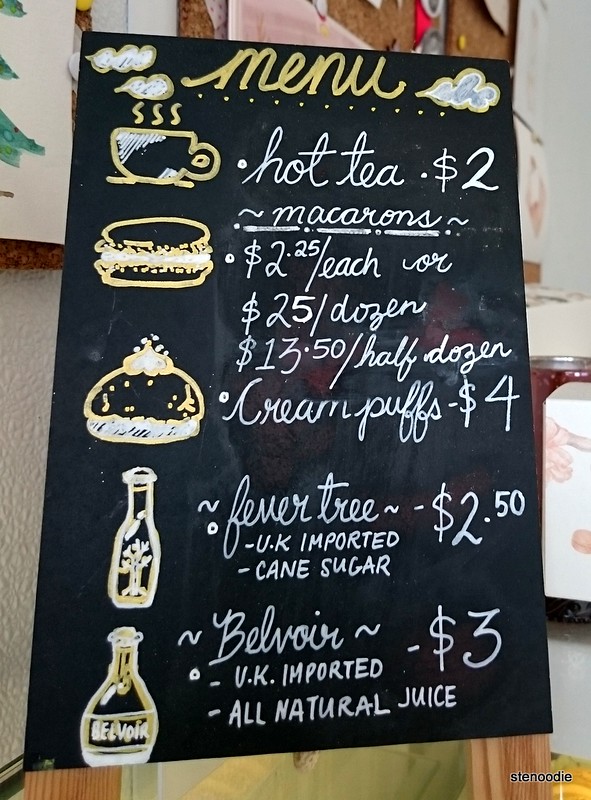 Once Steph came back, we were delighted to enter the little shop and listen to Steph share a little bit about her story of starting Petit Nuage.  She makes everything herself and imports the cold drinks from the UK.  Her design of the shop is classy and features some cats on the boxes for the macarons.  Nicole bought two of the buttons since they looked so nice. 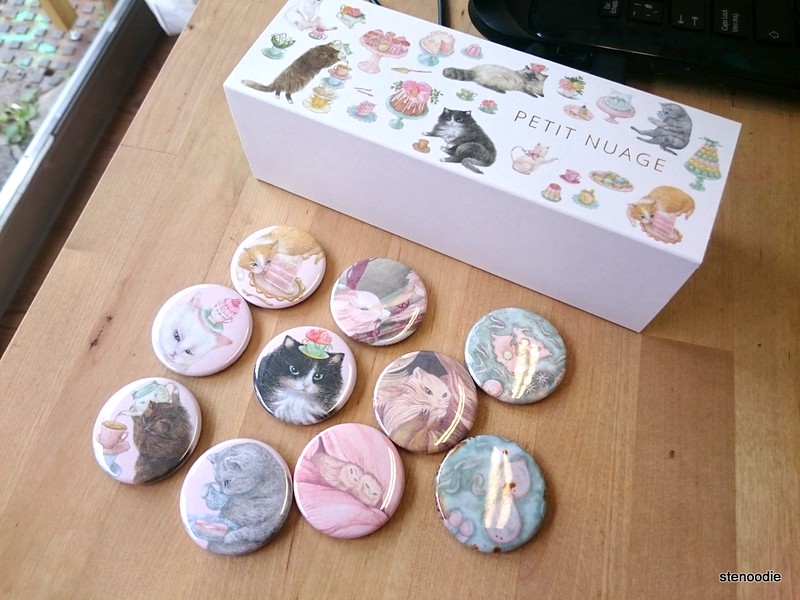 I really liked the quaint feeling of the shipping container and how everything fit nicely together. 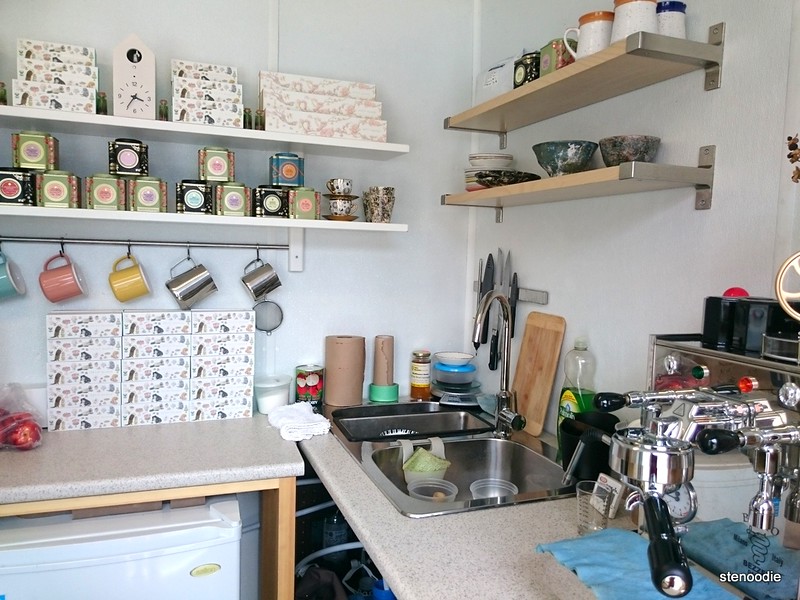 A little corner of the cafe 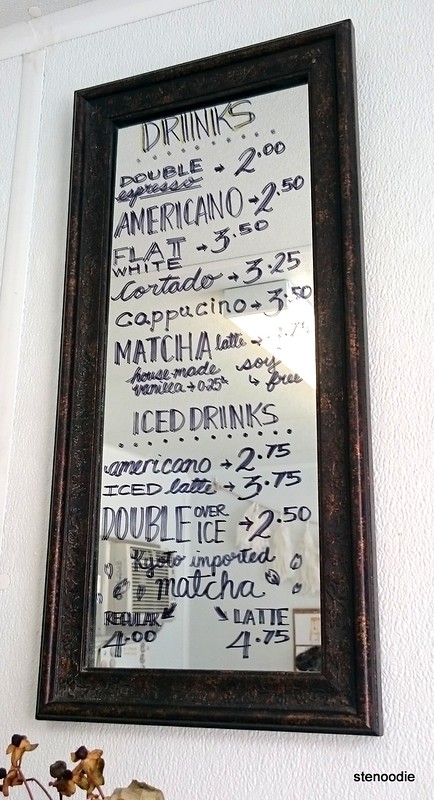 Their matcha iced latte is well known! I have to try it next time 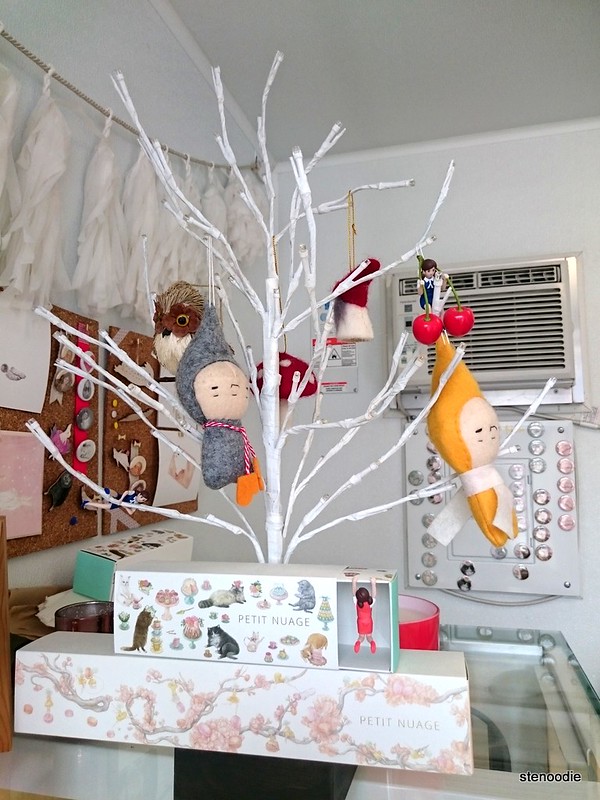 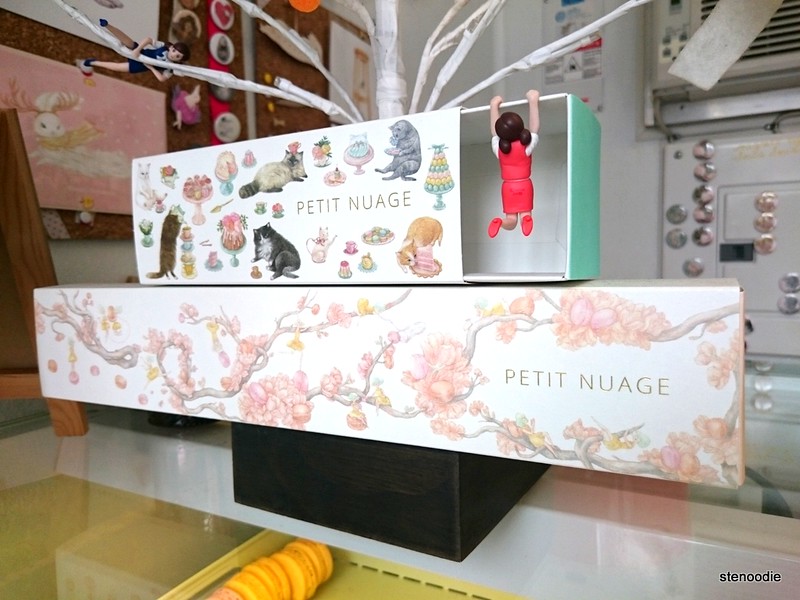 Macaron boxes for 1/2 dozen or 1 dozen 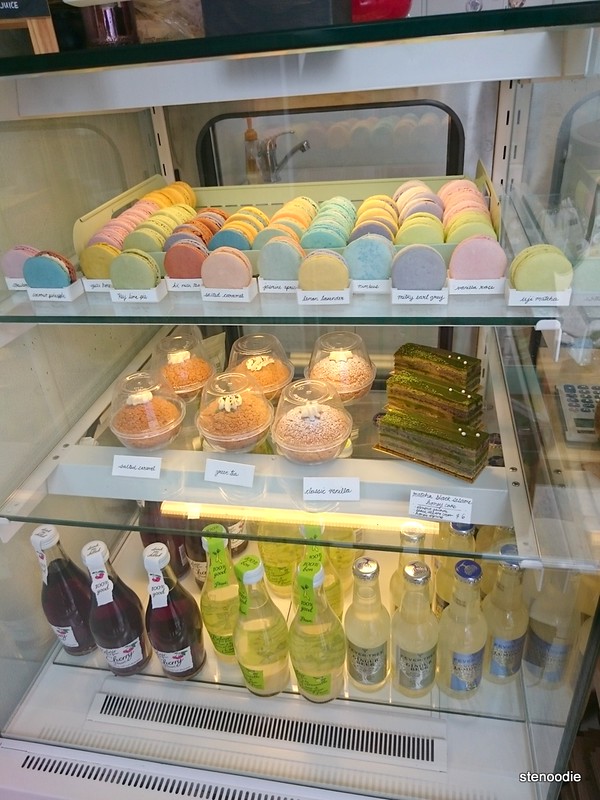 Today’s selection — their availability is not always the same. Sometimes Steph is stocked full with cream puffs, sometimes she is not 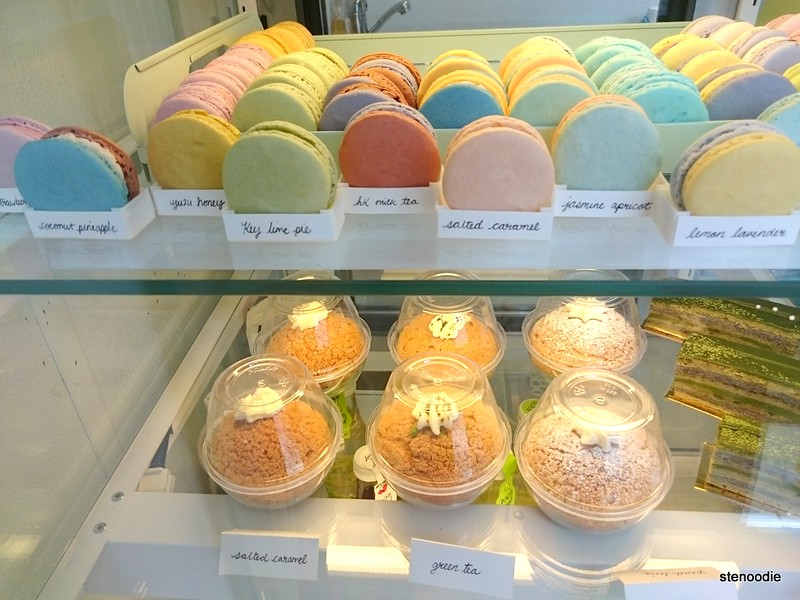 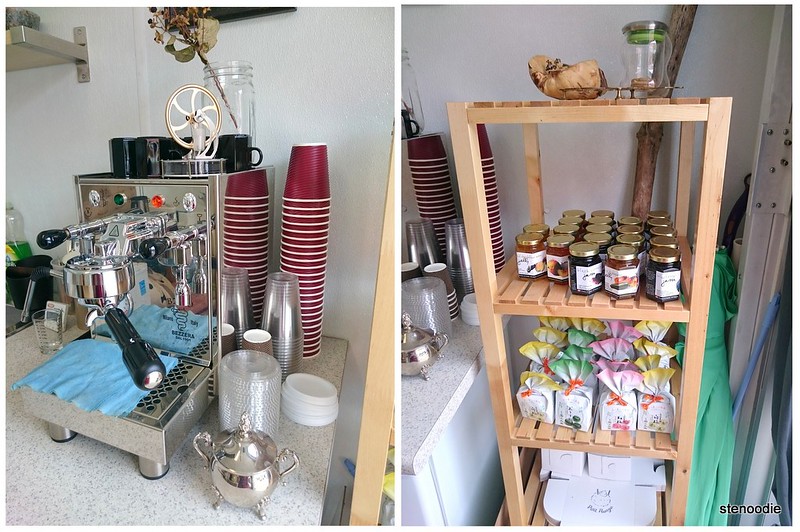 I ordered two macarons and the vanilla cream puff since that was their specialty. Nicole got the Matcha Black Sesame Honey Cake and a drink. 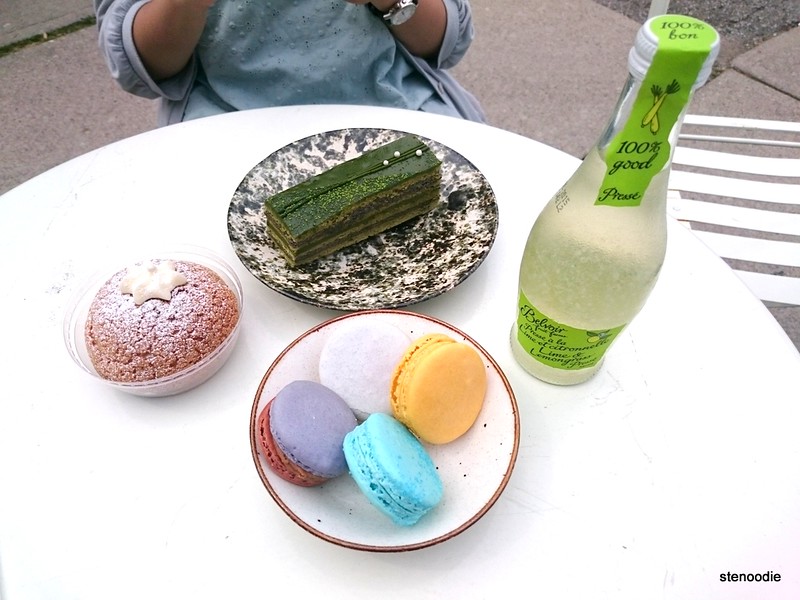 A great afternoon of desserts!

It was a beautiful summer afternoon so we sat outside where there were two tables and some chairs.  Later, when the sun came out, Steph brought out a nice green umbrella to shade us from the heat.  It was a really nice time! 🙂 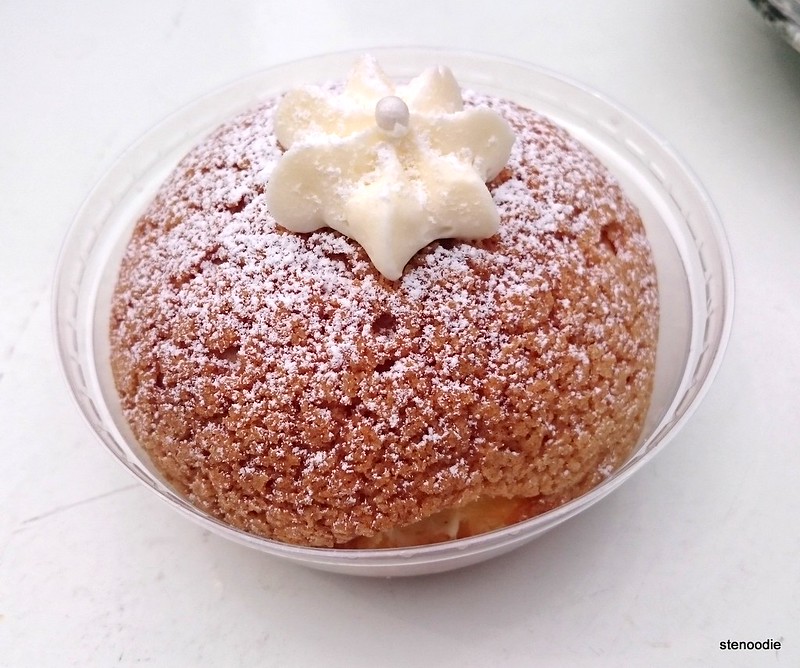 Classic Vanilla Cream Puff. $4
(On this day, there were also Salted Caramel and Green Tea)

I tried the vanilla cream puff first (they are also available in green tea and salted caramel).  It is best to eat the cream puff with your hands as I soon found the difficulty in using a fork.  (Also, start from the hole where the piping was inserted to avoid a big mess.)  Wow, the cream inside was so smooth, cold, and creamy!  It was very, very good. 😀  Nicole really enjoyed it as well!

Next, I tried the macarons.  I chose the Nimbus flavour (never seen this before) and the HK milk tea.  Steph also gave us the Yuzu Honey and Earl Grey to try as well.  Yum!

It was cute how all the macarons were a different colour; some of them were even two-toned!  I’ve also never seen that before. 🙂

The Nimbus macaron was blue and the reason why it’s called that is because it has an elderberry marshmallow centre.  It also had some blue sugar crystals on the top of it.  It was a fairly large macaron and very flaky.  It was quite soft and easy to crack (so beware when holding it).  I liked the centre where there was ooey soft marshmallow.  I did find that it was a little on the sweet side though. 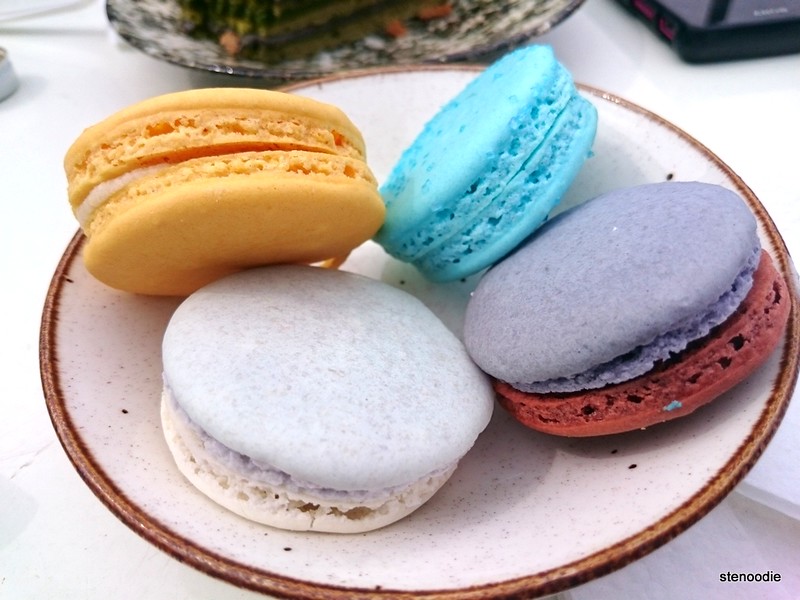 The HK milk tea macaron was also two-coloured.  This one surprised me because it tasted rich like a coffee or chai tea and was actually chocolate inside! I really liked it for that reason :).

The Yuzu Honey macaron was my second favourite since its light yuzu flavour, although sweet, made it taste great and refreshing.

The Milky Earl Grey macaron didn’t have much of a tea flavour I found.

All in all, I was impressed with the selection of macaron flavours that they had!  It’s unlike most of the macaron flavors that you would find elsewhere in the city.  I did find them a little too sweet, however. 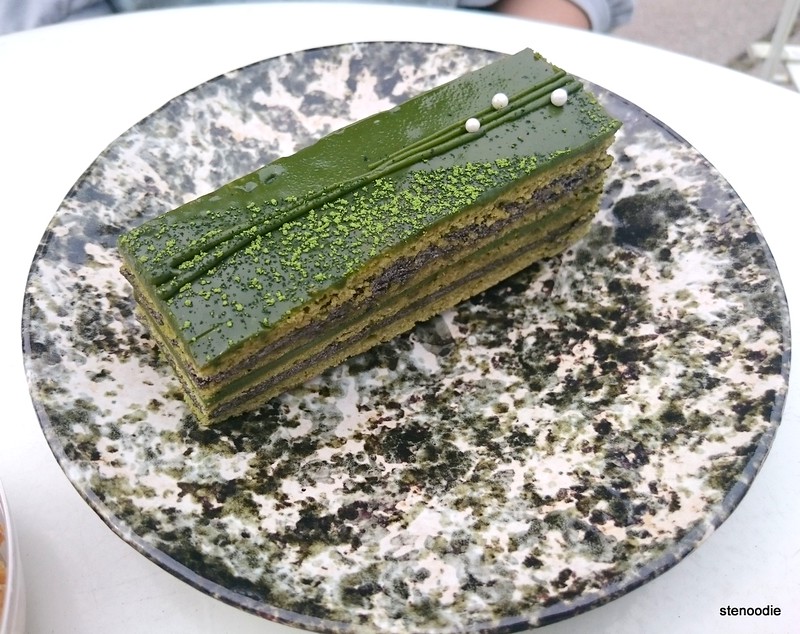 I also tasted a bit of the Matcha Black Sesame Honey Cake that Nicole got.  It is made with almond joconde, black sesame cream, and honey syrup.  It was so rich in matcha and sesame flavour that it was quite unique but I also found its sweetness a little too overwhelming.  For that reason, this dessert would go well with a light sour drink and also to be shared!  Nicole took the remainder of her cake home since it was so rich and dense.  It looked so good though!  The Belvoir drink was also unique in that it contained lemongrass!  It was nice. 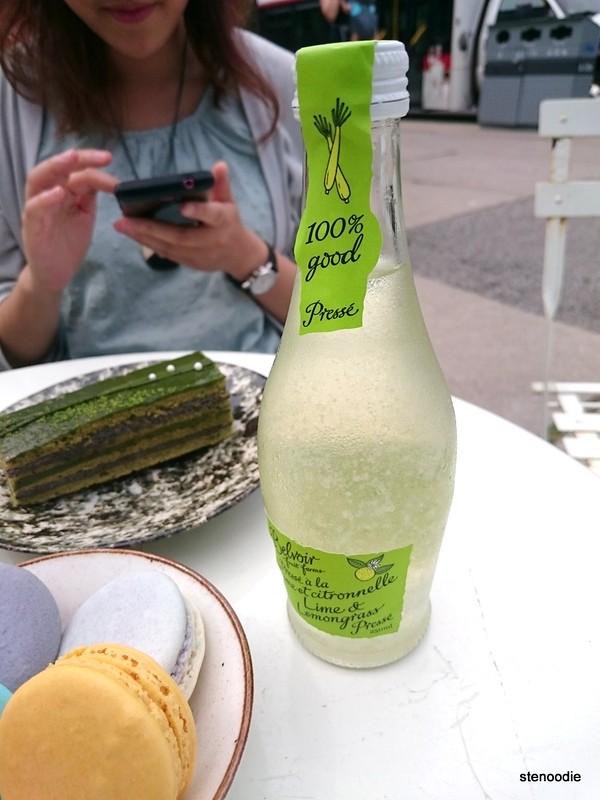 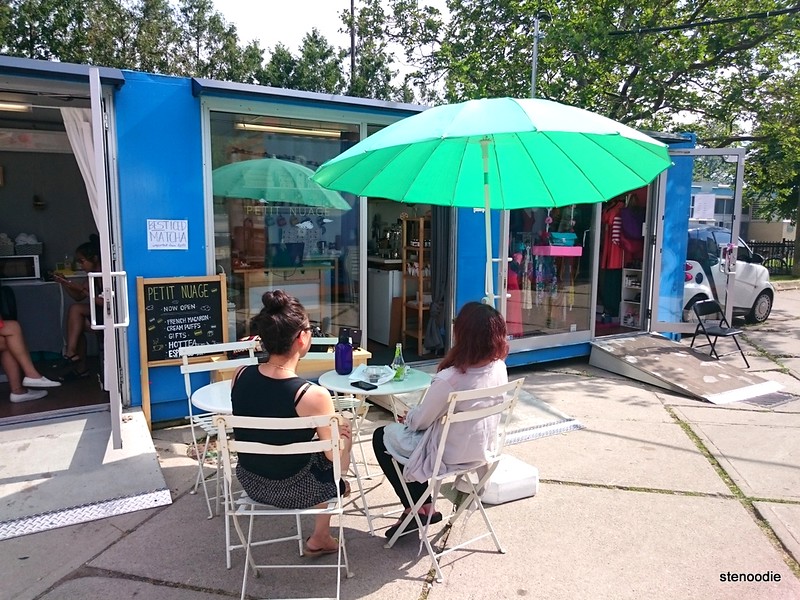 I’m so glad that Nicole brought me here to discover Market 707.  I will have to return again sometime to check out the other little shops and eateries!  (There are a lot of them too).  Thanks, Steph!  Keep up the great work on Petit Nuage. 🙂

10 Responses to Petit Nuage at Market 707