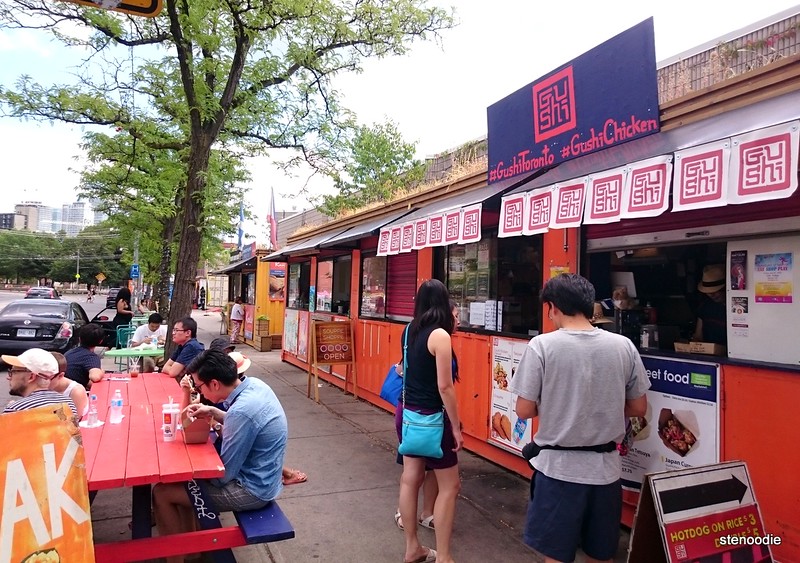 Remember my recent post about visiting a cute little dessert shop located in a series of shipping containers called Market 707 in downtown Toronto?  Market 707 is a little community of shipping containers where local small-business owners have set up shop to sell their merchandise like food, clothing, little trinkets, or even services like manicures and cell phone services.  A fellow food blogger, Anh, and I recently went there to check out Market 707 a little more.  We had both been there once before so this revisit was to check out the rest of the shops. 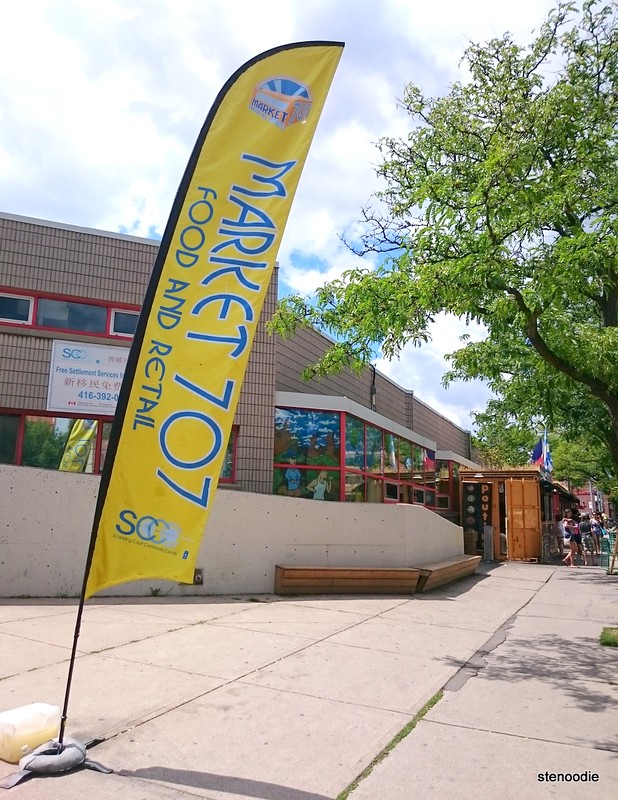 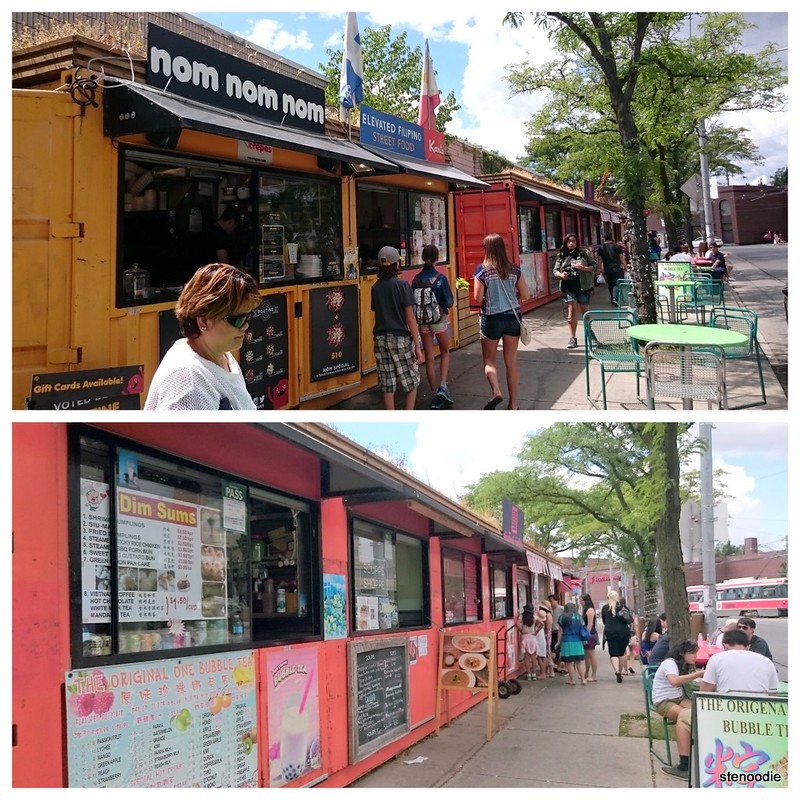 A community of street food and retail merchants in shipping containers

I visited Petit Nuage last time with Nicole and had a fairly thorough look-through the shop and trying most of their specialties.  This time, Anh and I tried food from Kanto and Gushi! 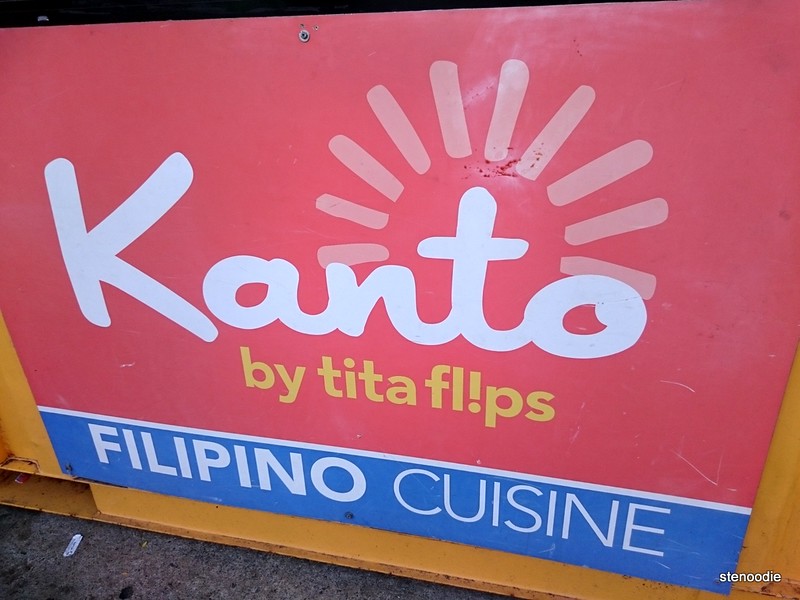 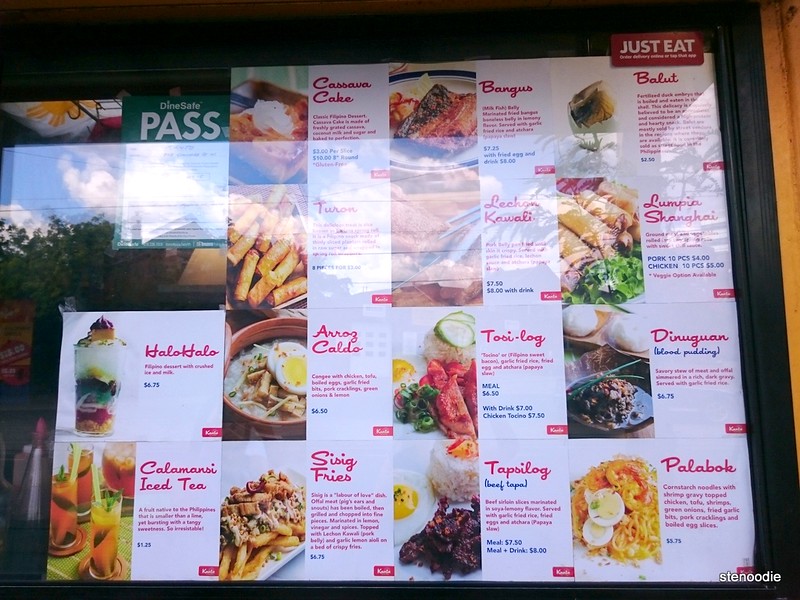 The menu at Kanto 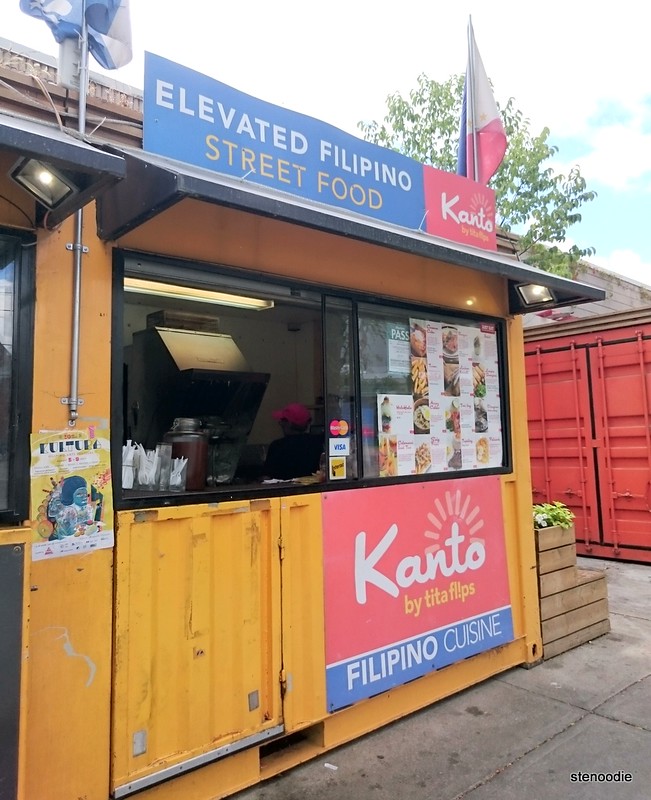 Kanto is a Filipino shop that is owned by Tita Flips and are the retail outlet for a full-service catering option that makes traditional Filipino food.  Almost all of the shops at Market 707 serve street food.  There are tables and chairs for you to sit in and enjoy the outside scenery after eating the food.  There were actually a lot of selections at Kanto and browsing through the menu, I was completely shocked and pleasantly surprised to see that they served Balut!  For those of you who don’t know, balut is a popular delicacy in the Philippines; it is a fertilized duck embryo that you can eat.  It is not a particularly easy thing for people to eat as you can sometimes see the entire duck embryo including the beak, feathers, and wings in the egg.  However, it is always something that was on my list to eat and try.  It was my first time eating “balut”, but afterwards, I recalled a moment in my childhood where my mom brought us similar eggs at the Asian supermarket and we served them at home.  This was my first time eating them as “balut” however.

Tita Flips told us that it would take a few minutes for our order to be ready.  We also ordered a side of Lechon Kawali.  Lechon is a very popular Filipino dish; it is pork belly that is pan fried until the skin is crispy.  It was served with garlic fried rice, lechon sauce and atchara (papaya slaw).  In Chinese food, there is a very similar dish of barbecued pork where the skin is also very crispy and it is always delicious. 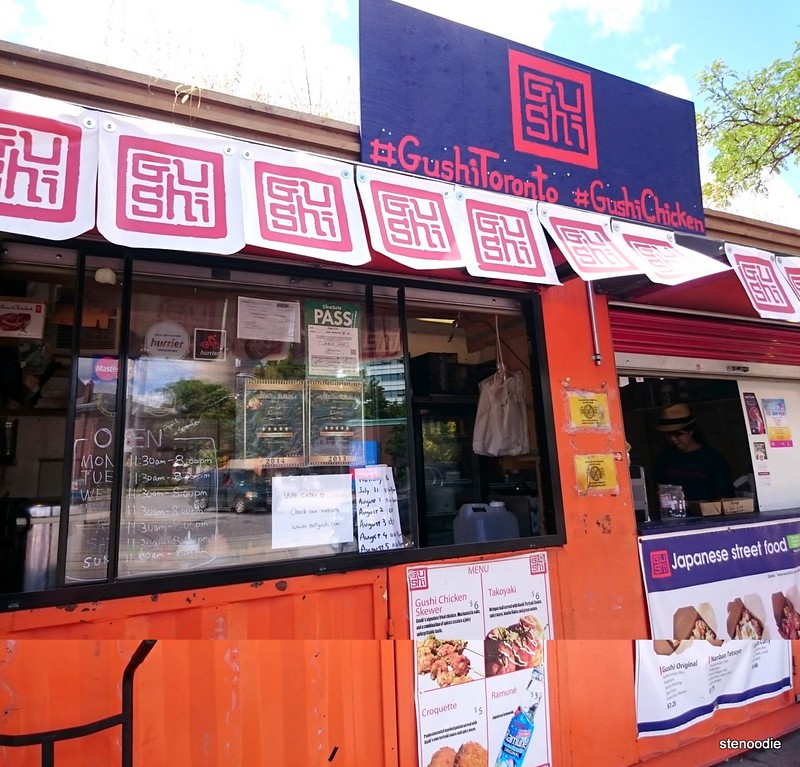 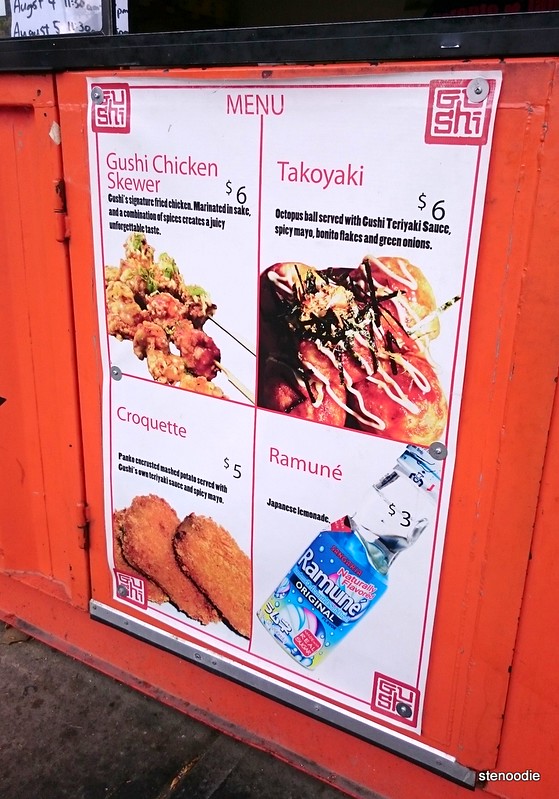 While the food at Kanto was being made, I walked over to Gushi and ordered a side of Gushi Chicken Skewer.  The first time I saw Gushi was at last year’s Matsuri Japanese Festival but didn’t get a chance to try.  Their big portions of fried chicken looked so appetizing to me!  Gushi specializes in Japanese fried chicken and they are the first store in Toronto to specialize in it.  I definitely wanted to try them out. 😀  I ordered one of the Gushi Chicken Skewer.  In addition to fried chicken, they also have bento boxes, croquette, and takoyaki. 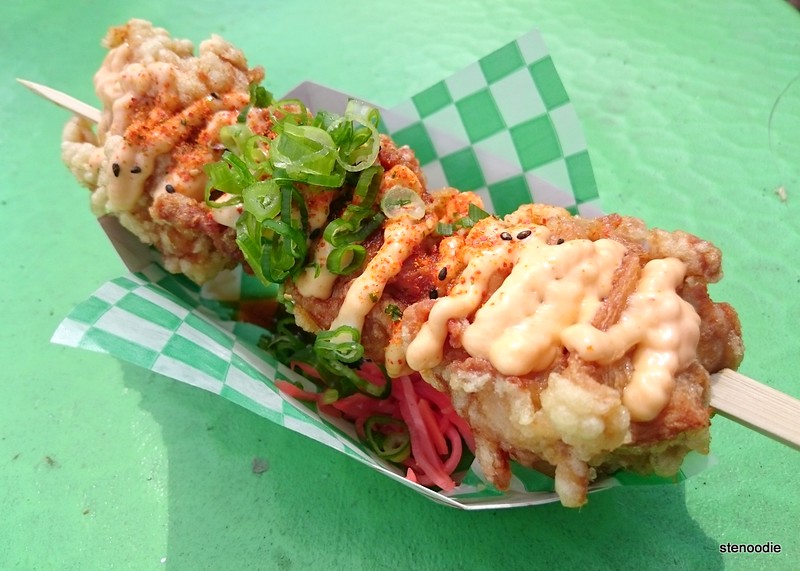 The Gushi Chicken Skewer cost $6 but it was very worth it to me!  It was a big skewer with fried chicken that was marinated in sake and a combination of spices.  It’s their signature dish!  There were three pieces of chicken and each piece was so large!  It even made holding the skewer heavy because the pieces of chicken were so large.  I really liked it and actually wanted more of it.

Rather than sitting outside where there were lots of tables and chairs, we found a spot inside the Dundas West 707 Community Centre since a bee was bothering us outside; so much so that it was difficult for us to enjoy our meal in the sun. 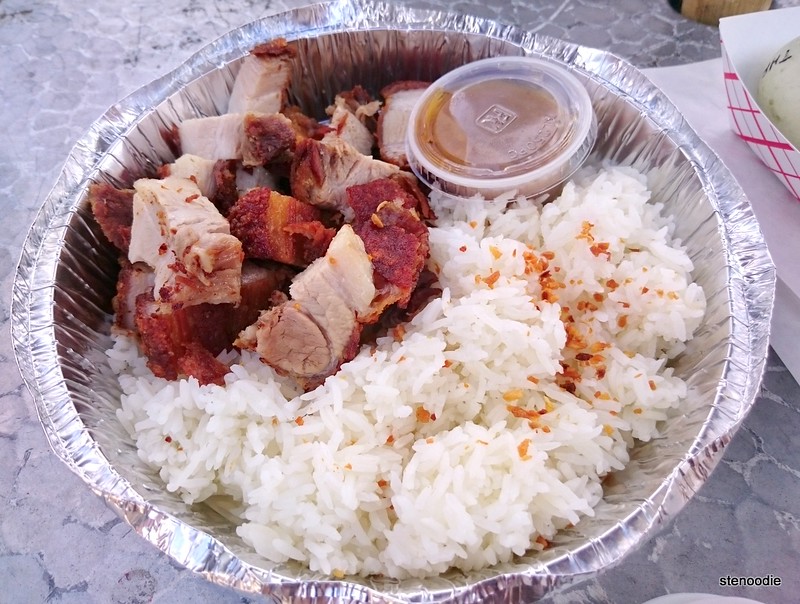 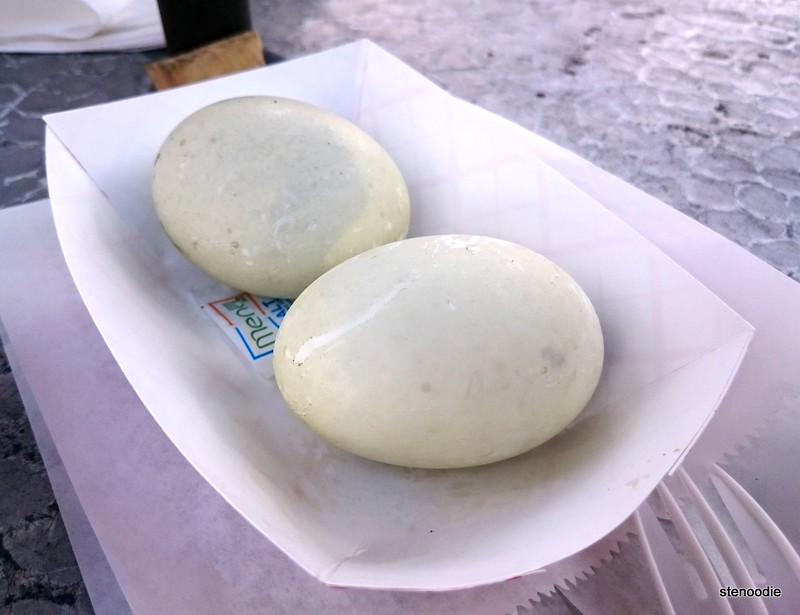 Balut. $2.50
-fertilized duck embroyo that is boiled and eaten in the shell. This delicacy is popularly believed to be an aphrodisiac and considered a high-protein and hearty snack 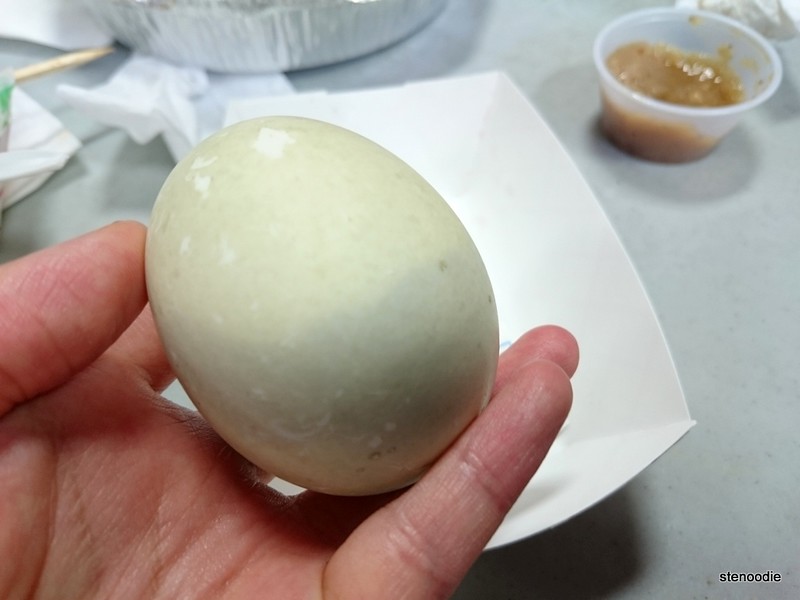 Balut are mostly sold by street vendors in the regions where they are available. It is commonly sold as street food in the Philippines 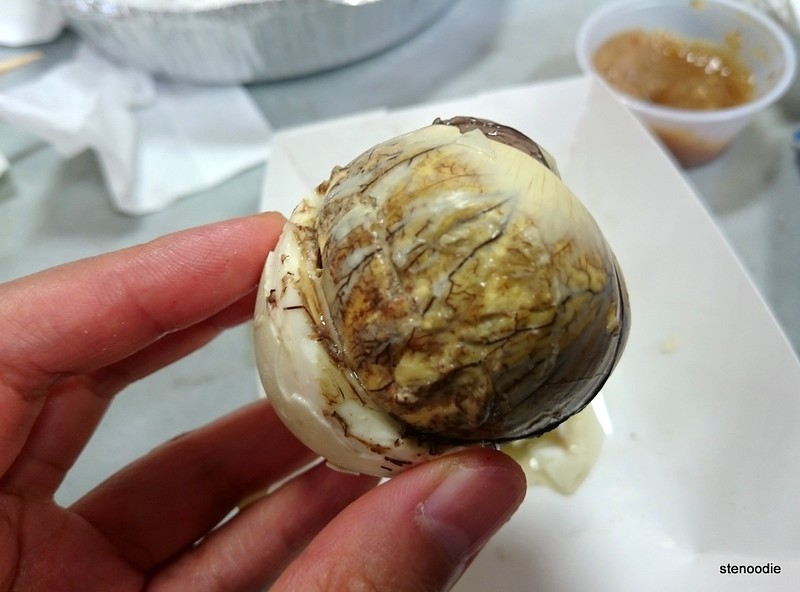 What you see after you peel the egg shell off

The balut was interesting!  They give you a packet of salt that you can sprinkle on to the contents of the egg after you crack the shell and peel it.  I could see all the veins of the content but no other discernible “bird” features.  When I bit into it, there were a lot of different textures; mushy, soft (from the yolk part), and the bottom of it was hard-soiled but a little hard to chew through.  It was definitely a unique experience!  It also wasn’t as bad as some people make it to be.  I think that if you can eat any sort of meat, you can also eat this; regardless, you are still eating some type of animal that was once living. 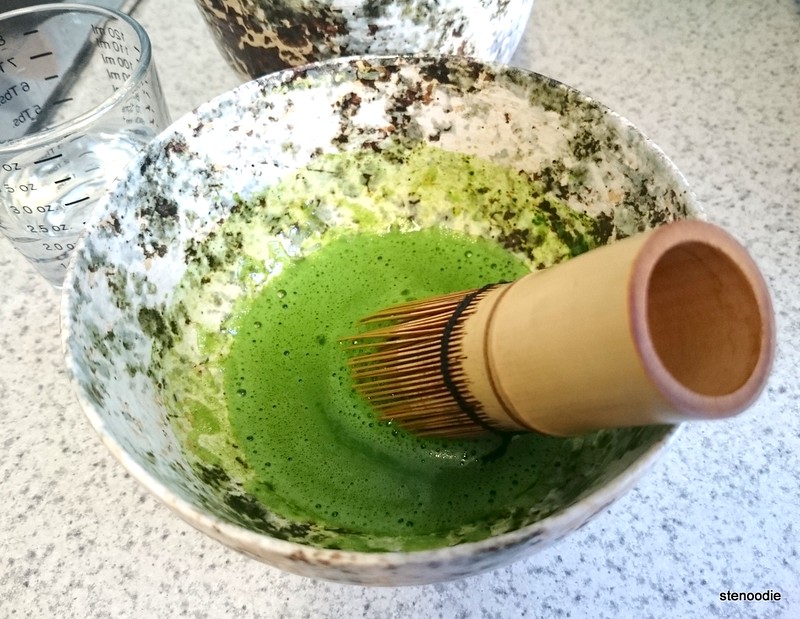 The making of the Iced Matcha Latte

To finish off our visit for this time, we ended up going to Petit Nuage to try their iced matcha latte.  As Steph likes to proclaim, they have the best iced matcha in the city!  (Also, BlogTO recently announced this too.).  It was nice to see Steph again.  She explained how this type of matcha actually comes from Kyoto and it was not an easy process to obtain this type of matcha (she also said that the best matchas have to be kept in the refrigerator; the other ones that are lower in quality don’t have such a requirement). 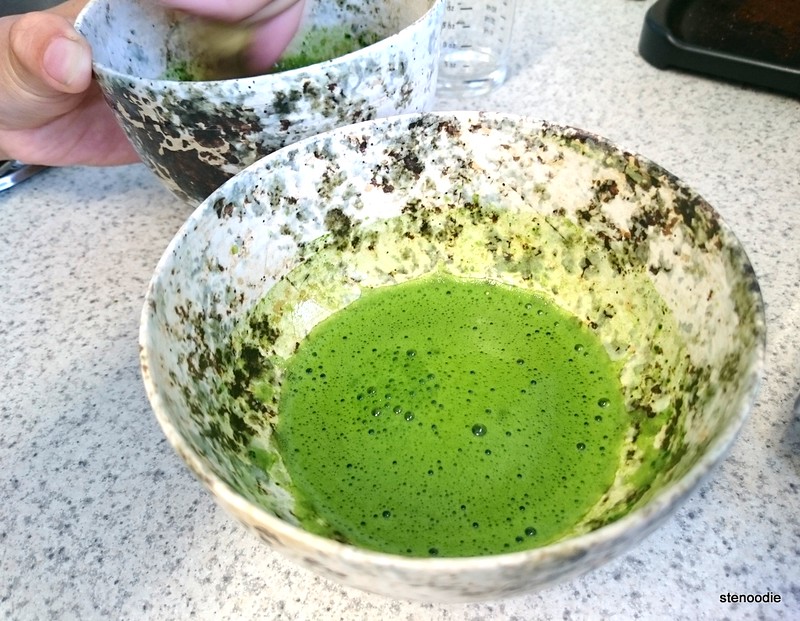 We watched how the iced matcha latte was made.  I liked how the ice cubes were so big and the shade of bright green that the matcha ended up to be.  Yum!  I liked it.  It was very smooth and had a good strong taste of matcha for sure.  Anh also ordered their Key Lime Cream Puff too! 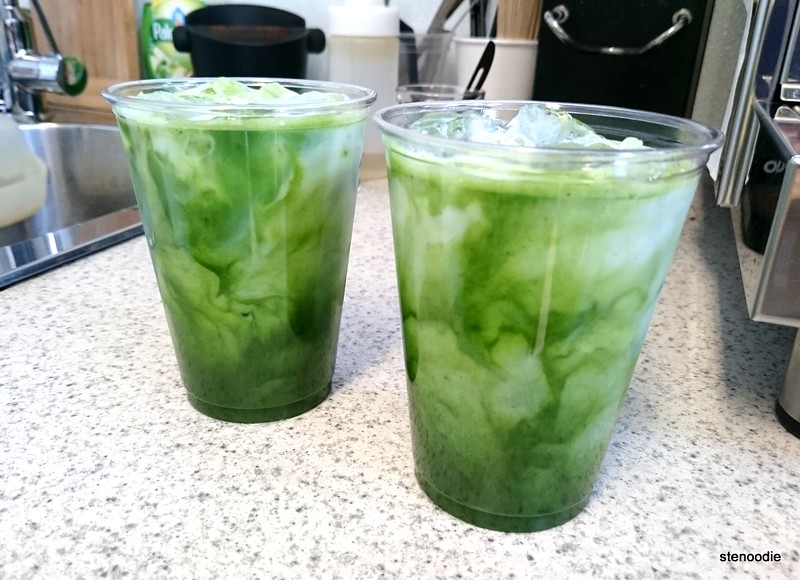 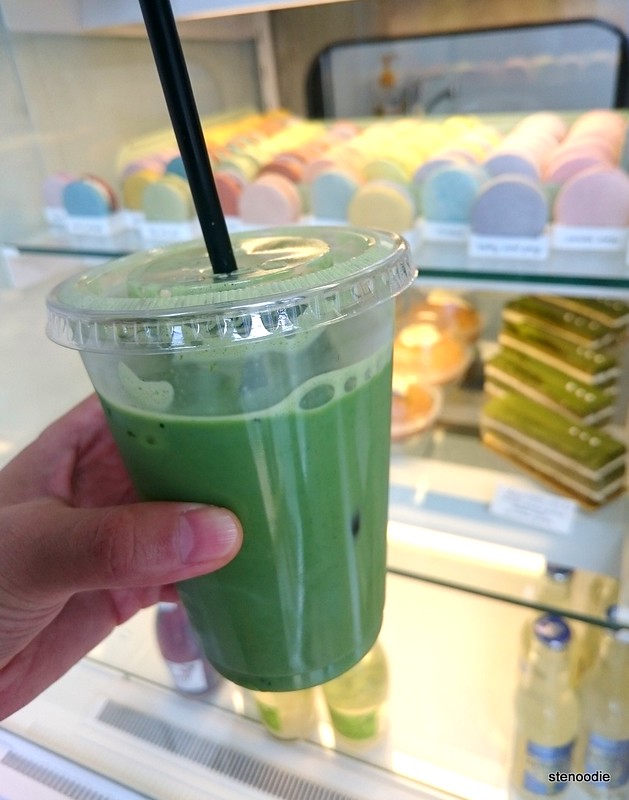 I left the Market 707 that day feeling very satisfied and actually wanting to return again to try more of the food from the other stalls (like Oh my Lard! — what an interesting name) and more food from these stalls that I already tried to round out my experience a little more.  They have so many varieties of food like Japanese, Filipino, Chinese, burgers, and more.  I really like Market 707.  Most people don’t know about this little community of shipping containers still.  Spread the word! 🙂

More food to discover at Market 707!