New Menu & Cocktails at The Libertine! 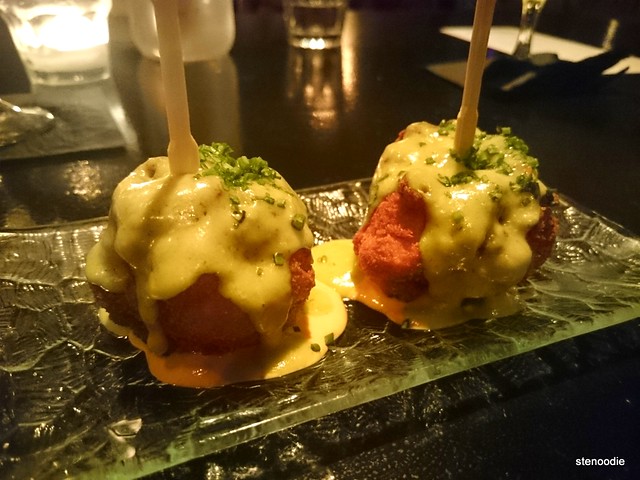 I was so impressed with The Libertine!  The Libertine has been newly acquired by a new owner and I was invited there with a friend to try out their new menu of drinks and food.  The Libertine is no longer a “snack-lounge” on Dundas Street West by Dufferin but it is a restaurant turned bar that should prove very popular for after work hours, group get-togethers, hang-outs, and more.

When you first locate the restaurant, you will only find a small chalkboard sign that boasts a humorous welcome.  It’s as if you’ve found the secret hideaway!  On top of the door, there is a flashing sign that says “tarot card and palm reading”available.  From the outside, it doesn’t look like a restaurant at all!  Kinda neat 🙂 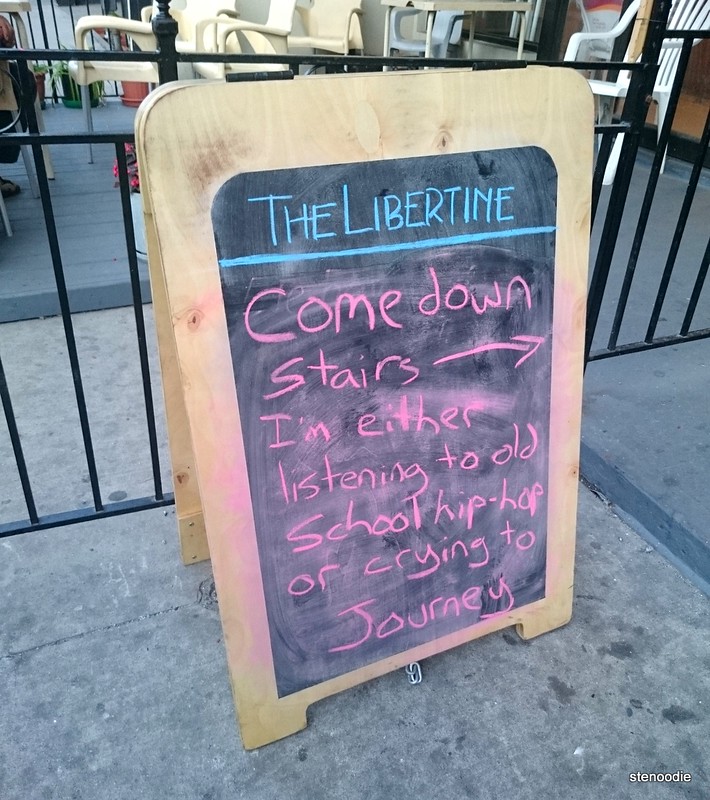 It’s a chalkboard with messages that change almost daily 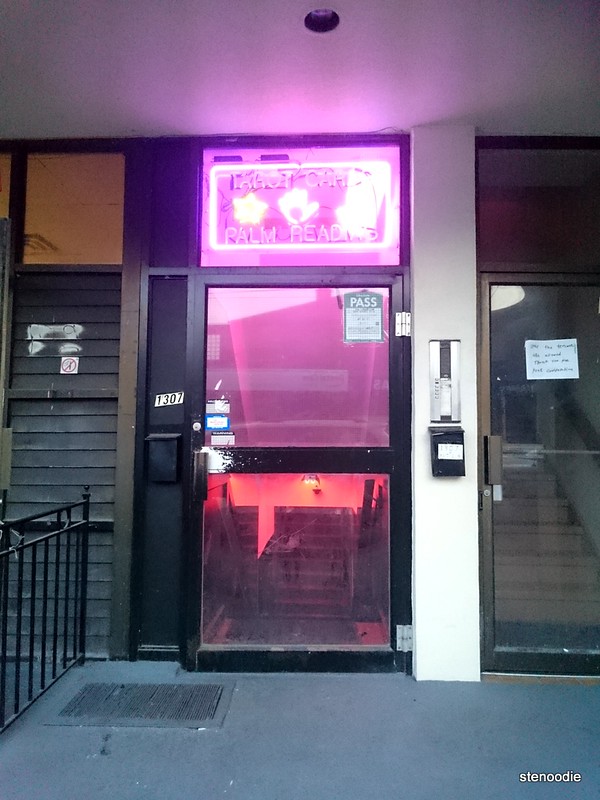 The only other hint that you have arrived is their address number: 1307

When you walk down the stairs, it is bathed in red light and there are mirrors all around.  You get to the bottom of the stairs and open a door to your right (the door on the left leads you to a palm and tarot card reader that is available after 9-11 p.m.).  You are led into a really dark dining room and bar where there are only a few lights showing you what the restaurant really looks like.

I asked for Phil, the owner, and I was handsomely greeted.  Phil was warm, friendly, accommodating throughout our entire stay.  He and the rest of the staff really made our visit felt like a five-star experience.  Thank you!

Phil said we could sit wherever we wanted; the bar or the U-shaped booths.  We chose the comfortable red booths. 🙂 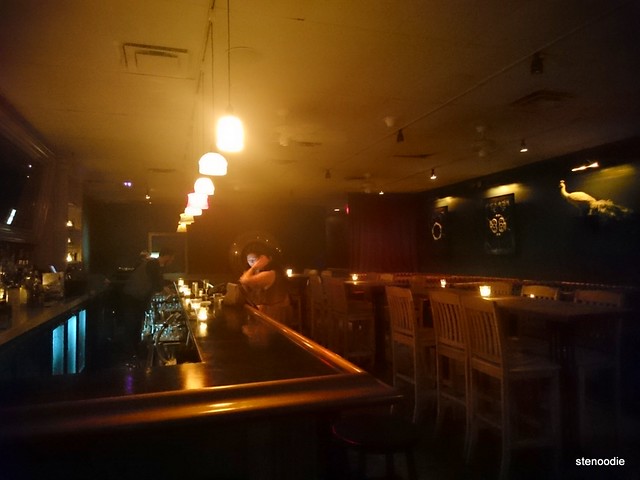 It was quite dark inside 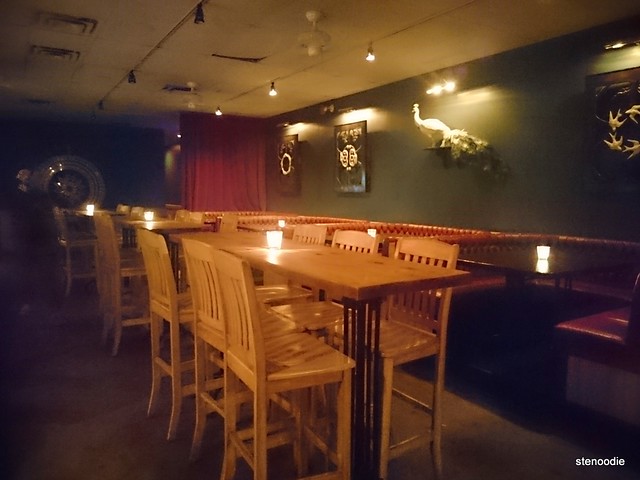 But once you sat down, it didn’t seem as dark inside anymore and felt private and a secluded space 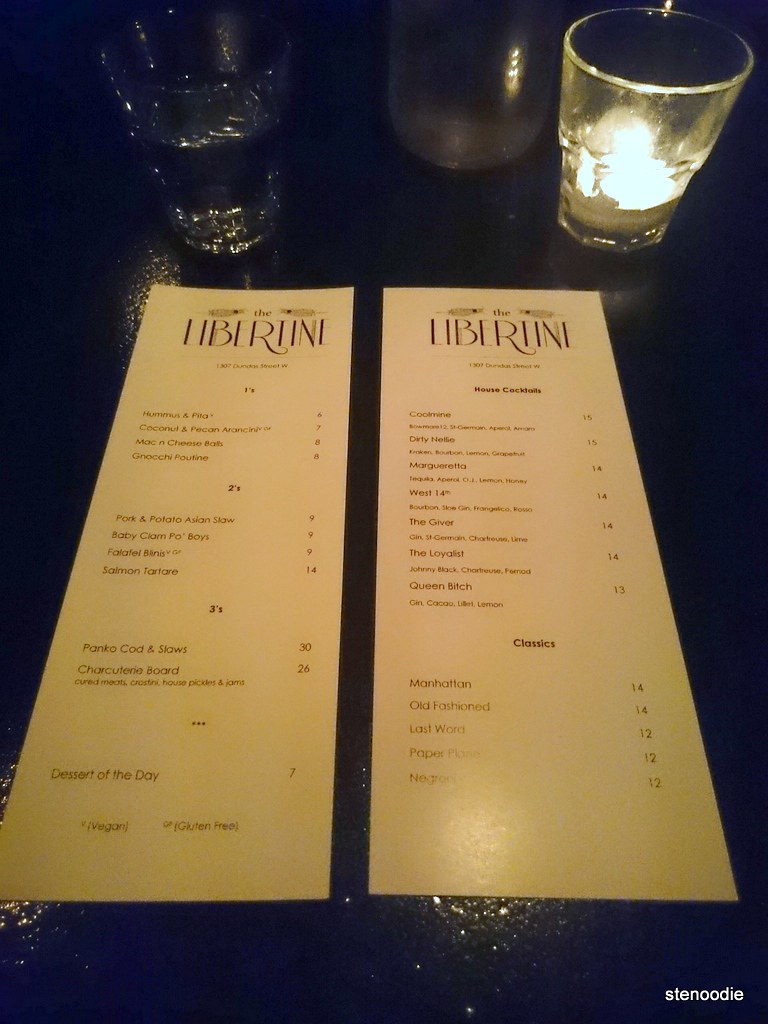 Phil showed us the food and drinks menu and explained a little bit about what the 1s, 2s, and 3s meant (1s for one person, 2s to share, 3s to definitely share).  He said he could prepare a selection of their finest and most unique dishes for us to try.  Yes!  I was very excited and happy for this arrangement.

Matt, the bartender, also came over to say hi and introduced the drinks menu for us.  He was even open to custom creating some drinks for us, but after hearing about two popular ones that they serve, the Queen Bitch and The Giver, we were more than content to try those out.

The Queen Bitch arrived with a little curly lemon twist and the Giver had a slice of lime in it.  The Queen Bitch was quite lemony and fresh and the Giver was a bit stronger in flavour and alcohol.  I really liked both of them as they seemed the perfect drinks to open up our appetites.  I think I liked the Giver a little more just because it was stronger but both were amazing. 🙂 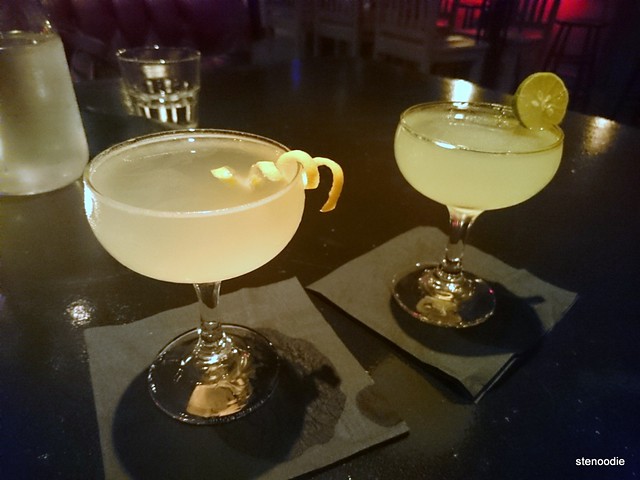 Before long, our dishes of food to share arrived.  The first one was their Mac and Cheese balls and this smelled absolutely amazing when it arrived.  It was so nicely presented and plated too.  I took ample pictures to showcase its beauty.

The garlic cheese sauce was so rich and smelled delicious!  I couldn’t wait to try it!  Phil explained that this usually comes in threes but he wanted me and Jen to have more room in our stomachs to try their other selections so two was the number we got (so thoughtful). 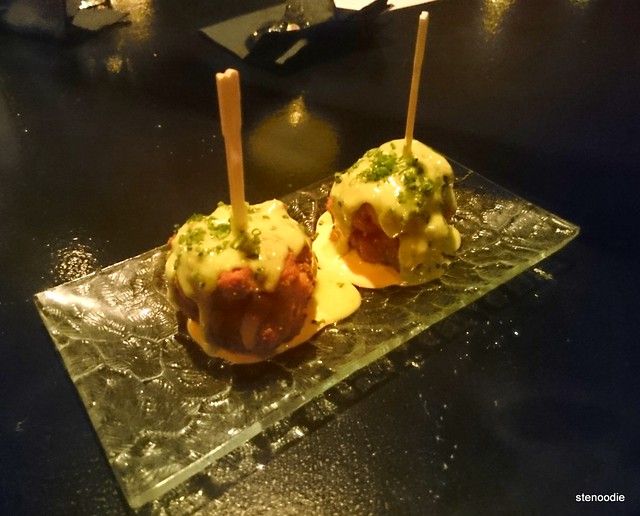 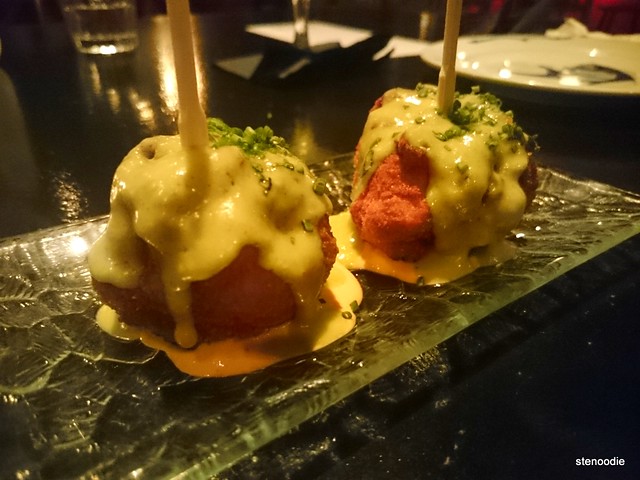 Ohhh, I loved the cheese and sauce!  The mac and cheese were gooey and packed tight inside the little ball.  I think the outside exterior could have been fried a little more crispy but I liked this!  There was also a little Sriracha sauce beneath the balls in the sauce.  Yum!!

I also liked how the garlic cheese sauce was made with real garlic (as JP the chef told us later).  No wonder it smelled so amazing!

Up next, we had the very unique Falafel Blinis.  This is a vegan and gluten-free appetizer that they created (they make everything in-house) — it’s a one of a kind! 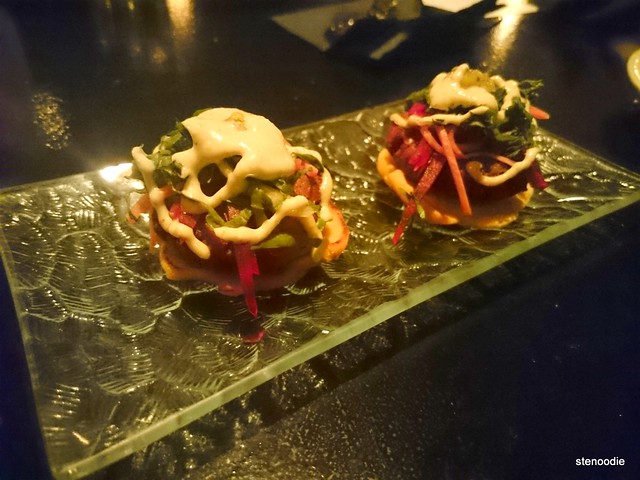 This was also a beautiful presentation and there were so many great layers and ingredients in this!  There were garlic, cream, all on top of a flattened falafel.  It ties in a lot of middle eastern flavours due to JP’s background.

I really liked this and even though it looked small and I tried to eat it in one bite as recommended, there were so much ingredients and flavour packed into it that I ate it in three bites.  I thought it was a very unique falafel blini dish that I have never had anywhere else before.  I think if the bottom of the blini (a type of thin pancake) was crispy or crunchy, it would have made an even better texture. 🙂 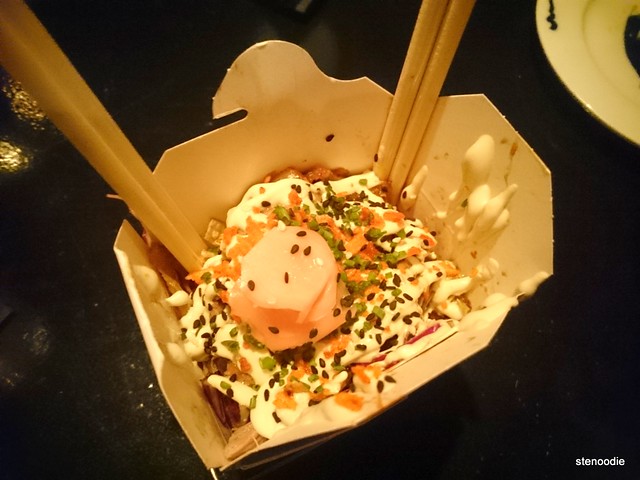 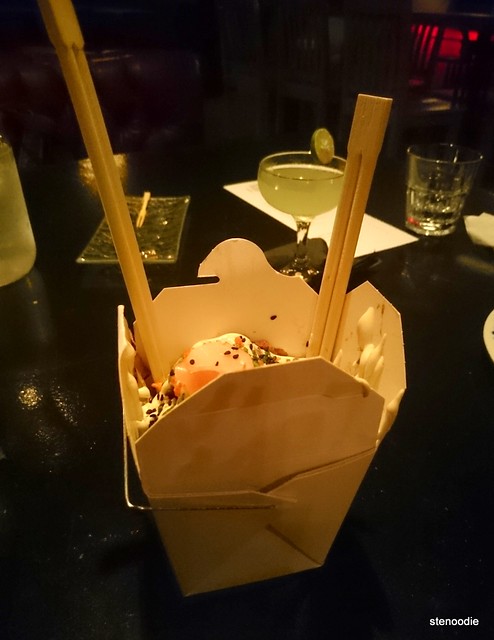 All inside a cute take-out box

Next up, we had the Pork & Potato Asian Slaw.  This arrived in a little Chinese take-out paper box (those stereotypical ones that folds up with a metal handle).  This was a very nice touch!  It contained avocado crema in it as well as pulled pork and slaw.  They give you some wooden chopsticks (just like the ones you get at take-out) and you have to mix all the contents up before you eat it.  It was a nice well-mixed up portion of pulled pork and slaw.  I really enjoyed it!  The pulled pork was delicious and not too strong in flavour and the Asian slaw balanced out the portion really well.  I really, really liked this one! 🙂 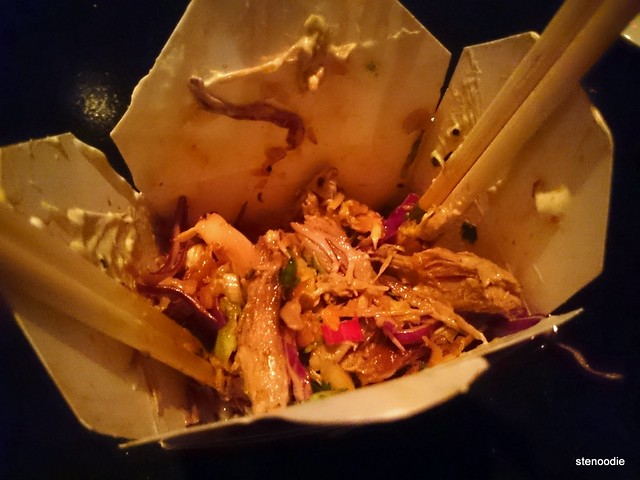 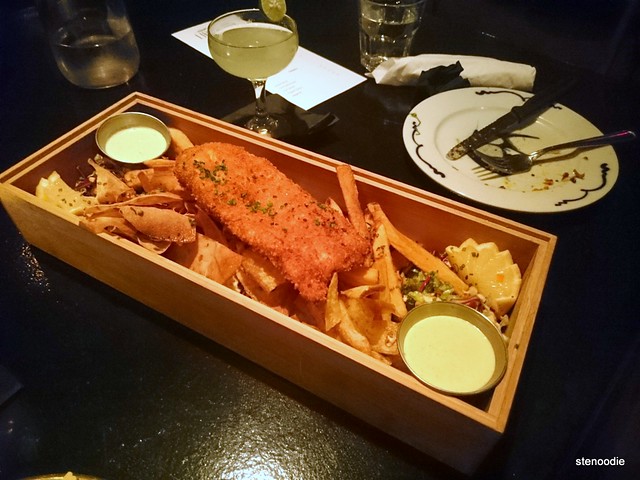 Jen and I were getting really, really full by this point and I was a little relieved to know that the next dish was our last one (I know, who ever complains about too much food?!).  We had the Panko Cod & Slaws.  Again, presentation was full points as it arrived in a long wooden box where it contained three types of slaws (wow!), two types of chips (fries and taro chips), and a panko-encrusted cod fish.  It was amazing!  For this portion, you definitely should share between two or three people.

I loved that there were three types of slaws: from one side as Phil explained to us — Soy Ginger, Maple Corn, and Apple Cider.  I really loved the Apple Cider one (probably because it was extremely refreshing to eat and cleansed the palate after eating the heavier dishes).  The Soy Ginger was pretty good too and was the saltier slaw of the the three (hence the ingredient in the name).  The Maple Corn definitely lived up to its name too.  It was creamy!  I enjoyed this one as well. 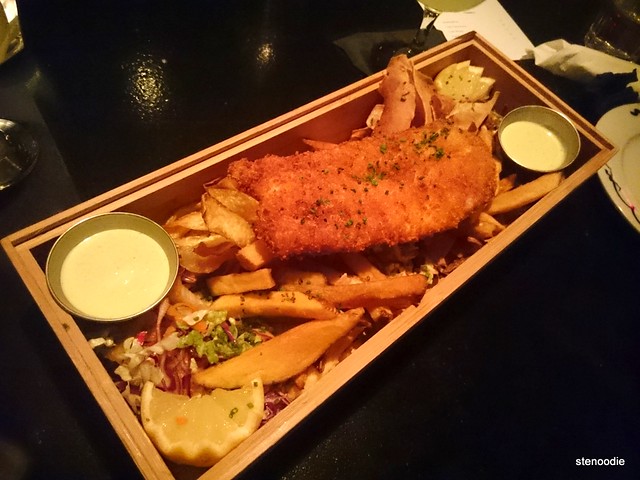 I really liked the taro chips.  They were fried so crispy and were paper-thin.  This was definitely a good snack.

The panko cod was pretty good as well!  Their tartare sauce seemed a little watered down, but the flavour was there. 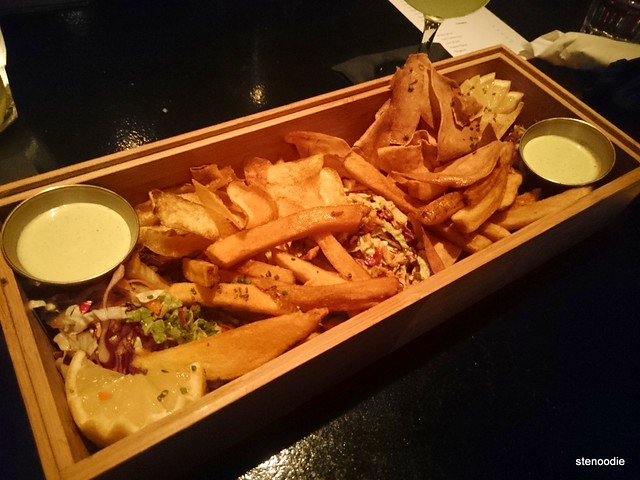 In this picture, the cod taken out which shows you the three types of slaws

Since we had so much food between the two of us, we actually didn’t ended up finishing all of it so we packed up the Pork & Asian Slaw and the leftover from the Panko Cod & Slaws home.  Yum!  More for me to enjoy at home. 🙂

All throughout the night, Phil and Matt kept coming to our table to ask how we were doing and if we needed anything else or more drinks.  That was extremely generous of them but it was too bad that Jen and I were already so full already we would have taken them up on the offer of more drinks to try out more of the menu.  I really did want to try more!  Matt was thoughtful and provided us with a dessert drink at the end to finish off the tasting. 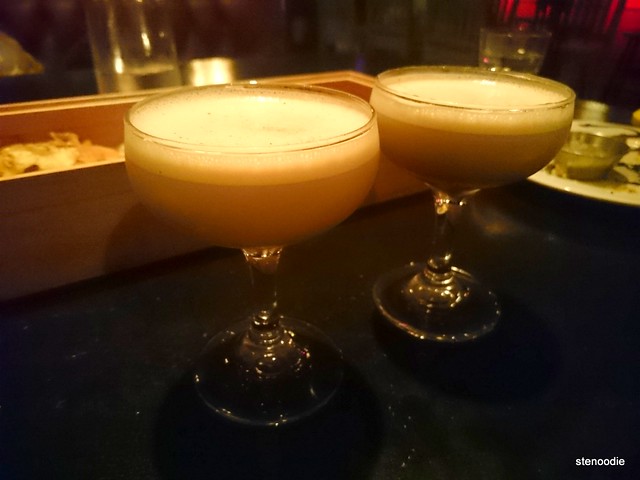 We got Tiramisu cocktails which contained Baileys and I definitely tasted it in the drink (I love Baileys)!  It was a little sweet and the perfect ending to a great night. 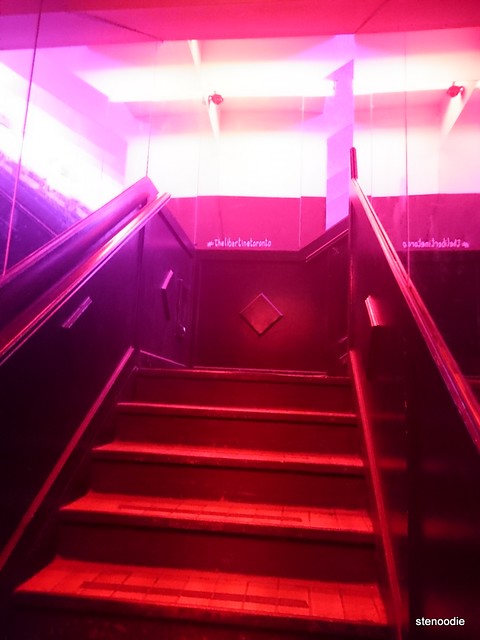 The stairs that lead you down into the restaurant

I really have to commend Phil, Matt, and JP for making the night a truly enjoyable and delicious one.  From start to finish, Phil made sure that me and my guest were taken care of.  He came by often to see how we were doing and explained every dish in detail.  It was such a great pleasure to speak with the one and only chef too, JP.  He was so humble and down-to-earth, asking for any constructive criticism of his cooking.  His passion for food and serving great food to others really spoke to me loudly in his words.  Even when I mentioned that the only thing needing to improve would be the number of customers to their restaurant (since they served since amazing food, more people need to hear about it), he still remained content that as long as people enjoyed his food, the numbers didn’t matter.  What an honour it was to be there and to enjoy his food!  I truly think The Libertine is a great spot for anyone to chill out with friends and hang out for a relaxed environment.  There was nice music playing that was just loud enough for you to hear your neighbour speaking.  More people need to know about this place! 🙂 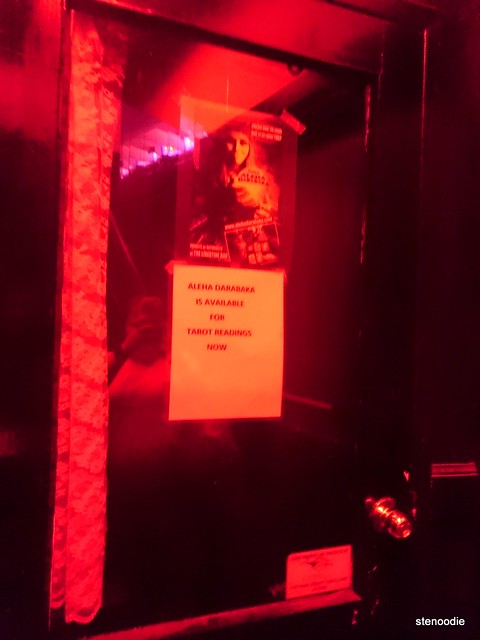 The palm /tarot card reader was in! 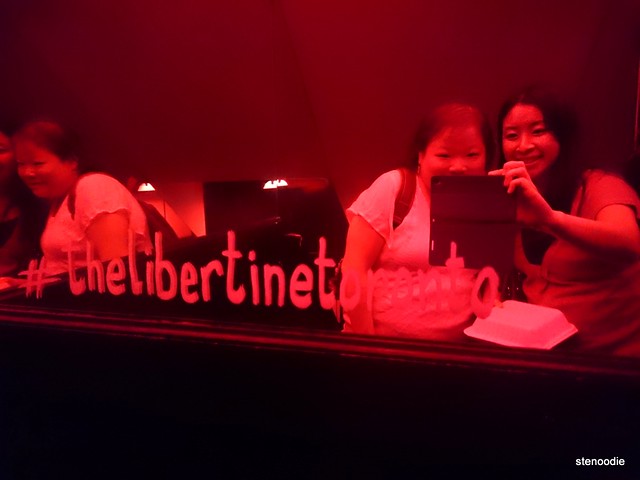 Have you been to this restaurant before?  How was your experience and the food?  Let me know how your visit goes after you try them out! 🙂  Jen mentioned wanting to come here in the future to try their Gnocchi Poutine. :9

FTC Disclaimer: Although The Libertine reached out and invited me to a complimentary tasting to review their restaurant, the opinions expressed here represent my own and not those of the restaurant.