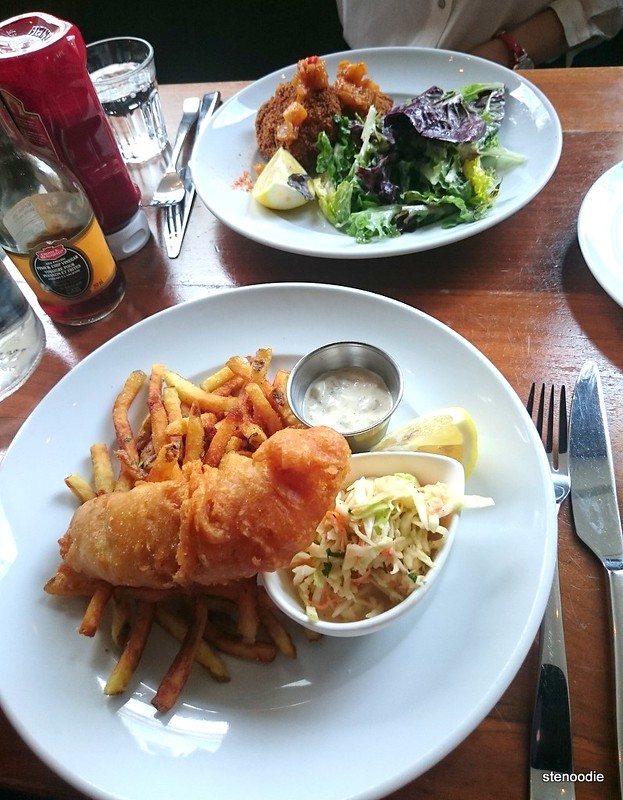 Located at 1 Balmoral Avenue in Toronto

John & Sons Oyster House is a restaurant that I’ve been meaning to visit for a while now.  I have heard of it as a great seafood and oyster place and definitely wanted to try it out for myself.  I know a couple of my friends have come here for Summerlicious meals in the past. 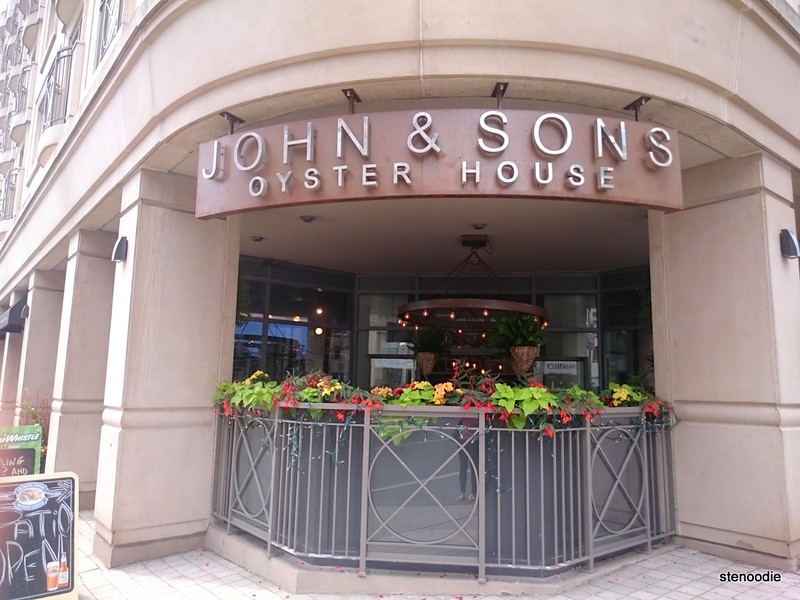 On the corner of Yonge and Balmoral Avenue

John & Sons is opened by a father, John, who wants to re-create his childhood memories of going to the local oyster bars with his brother and father and hosting a good and friendly environment for doing so.  His reason why is for his sons — hence the name.  They have two locations; one downtown and one midtown close to St. Clair Station.  I made online reservations for the midtown location almost three weeks in advance and it was a seamless process.  When I walked in, I was happy to see a beautiful oyster bar and restaurant that was homey and cozy.  They also have a nice patio that is shielded from Yonge Street right outside. 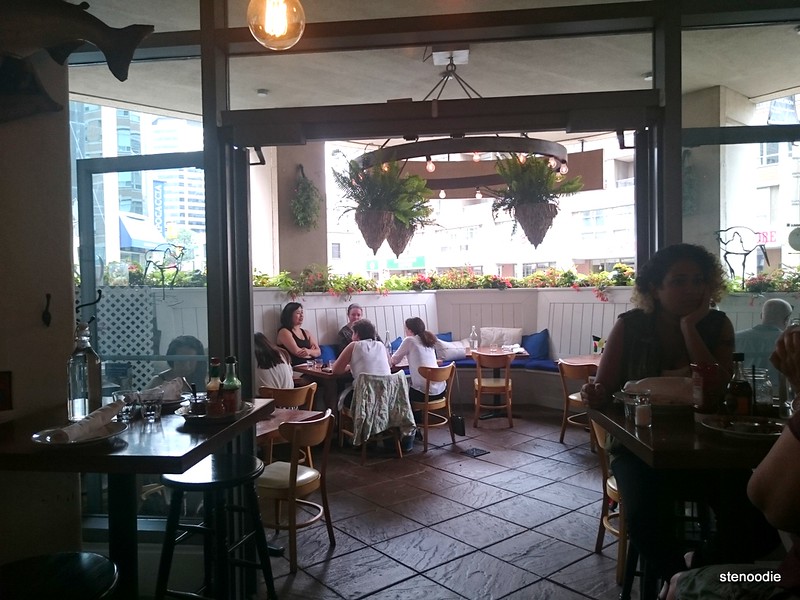 This is their secluded patio — so nice! 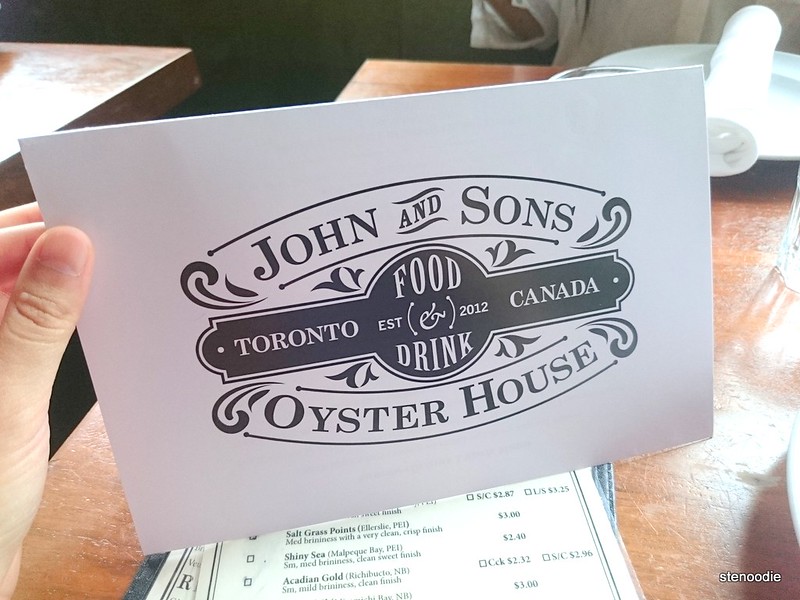 Cherry and I hadn’t seen each other since our high school days (we did bump into each other though at the last Night It Up paint event though), so it was really nice to catch up over a nice seafood lunch at this casual yet classy restaurant.

Their Summerlicious menu is more than impressive.  They have more than three selections for each course (usually restaurants only have three options to choose from) and each selection was a really enticing one too!  For example, I not only wanted to try their oysters but also their Seafood Chowder and not only their Fish & Chips but also their Fish Cakes, Seafood Stew, and Grilled Salmon.  Everything on their menu looked amazing! 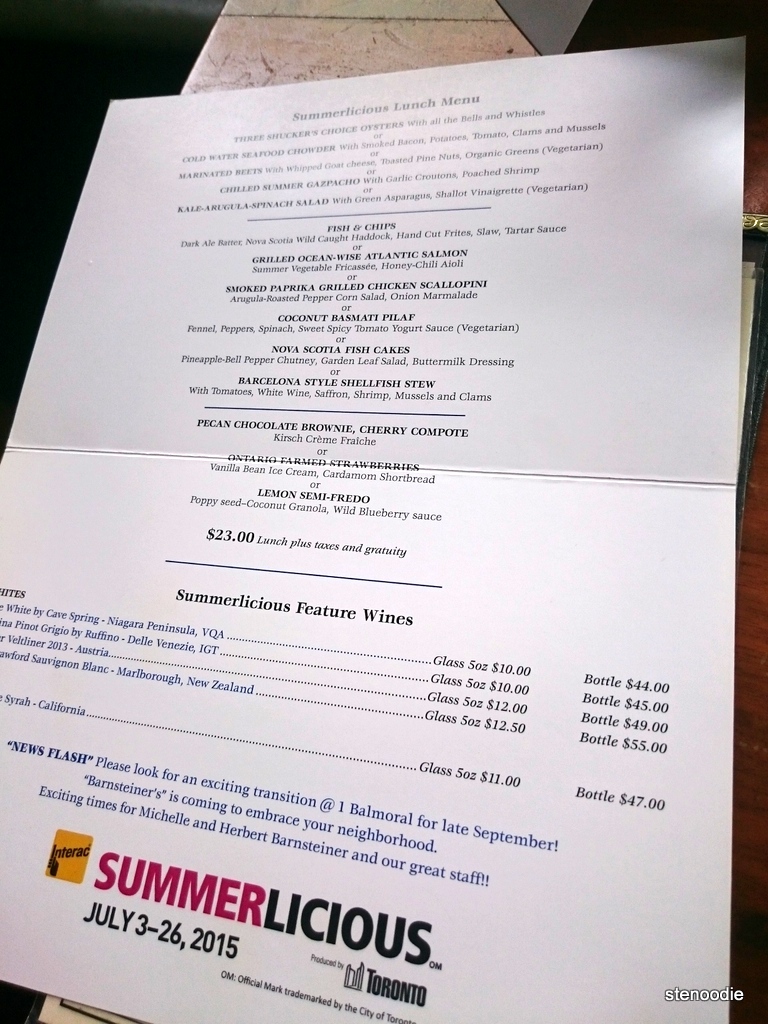 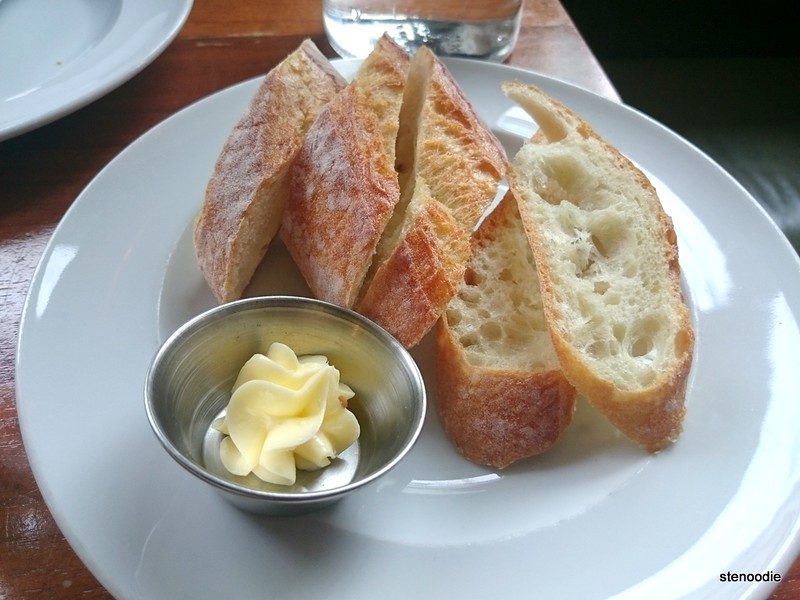 Despite my severe desire to try everything, I still had to pick one item.  I decided upon the oysters, fish & chips, and their chocolate brownie.  Awesome!  I was so excited. 🙂

Our server for the meal was very pleasant, friendly, and efficient.  While we were browsing through the menu, she already brought over a plate of bread and butter for us.  It was good!  I liked how the butter was soft like clouds and so smooth. 🙂 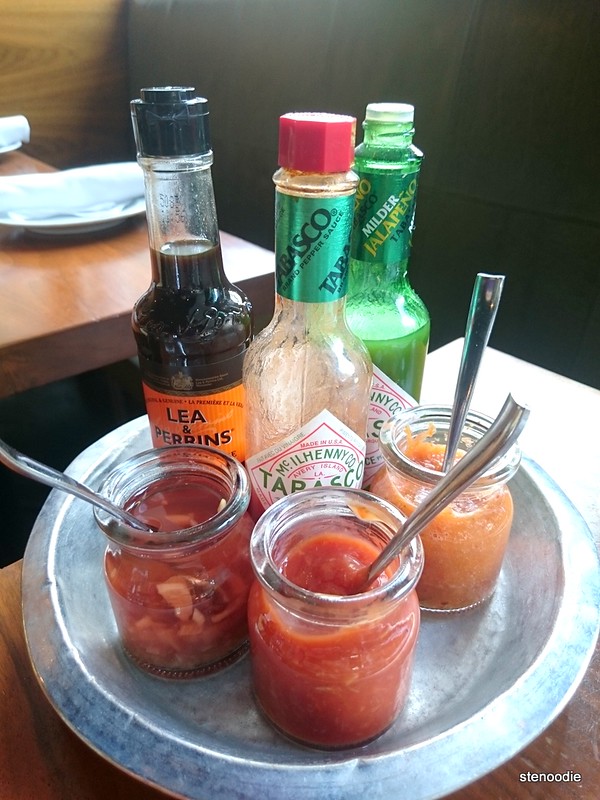 Tabasco sauce and condiments for the oysters 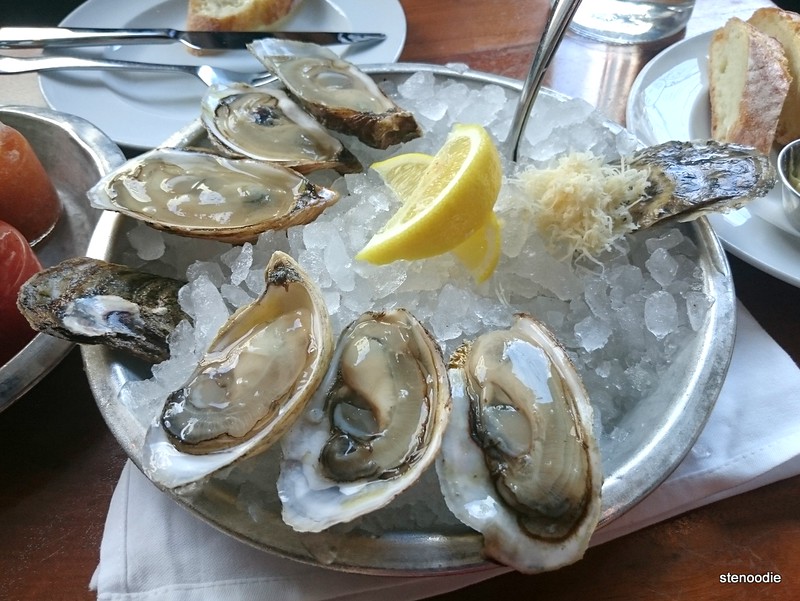 Three Shucker’s Choice Oysters
with all the bells and whistles 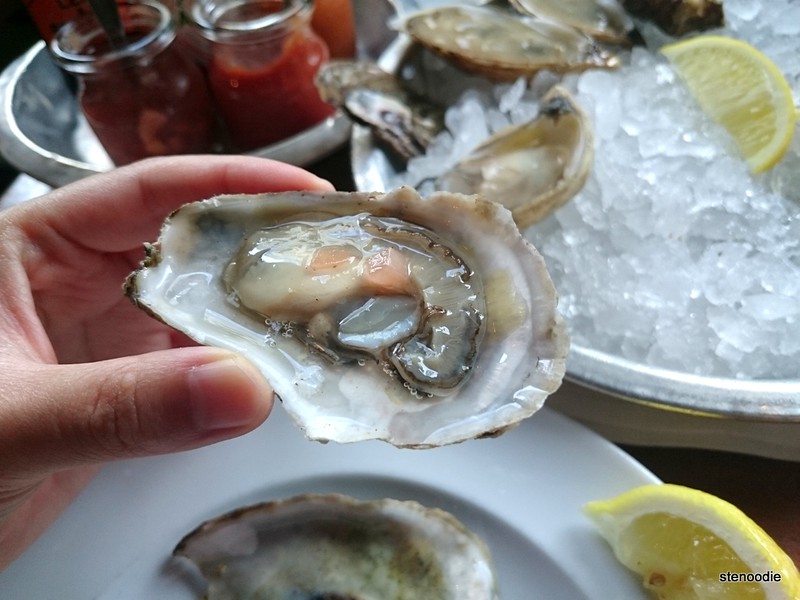 Cherry also chose the oysters as her appetizer and our six oysters appeared together on the same plate with ice underneath.  They were Hardy’s and PEI oysters.  Yum!  I liked how it was so fresh and smooth.  I actually really like plump and fat oysters so the only lacking part about these ones was that they weren’t fat enough for my pleasure.  Nevertheless, I can see why this place is known for their oysters.  They were shucked very quickly and brought right away to our table too!

My order of Fish & Chips was a Nova Scotia wild caught haddock in a dark ale batter.  It was a big piece of haddock on top of a pile of hand cut frites with some slaw and tartare sauce on the side.  The batter was very crunchy (almost a little hard) and the haddock fillet was smooth and rich but I didn’t taste the dark ale batter very much.  I liked the crispy fries and I really enjoyed the tartare sauce.  This was true tartare sauce that was made very well.  It was great!  I also enjoyed the slaw as it was creamy and refreshing from the fried part of the meal. 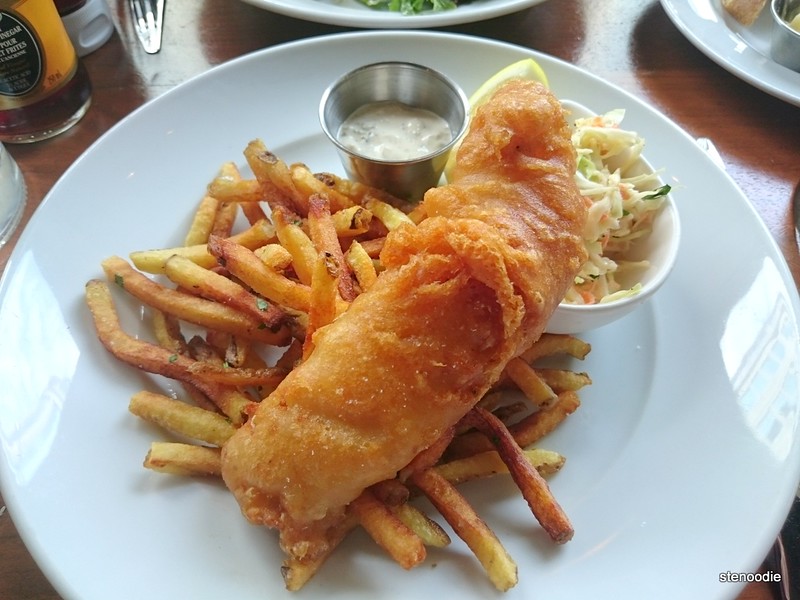 Cherry ordered the Nova Scotia Fish Cakes.  It arrived with a pineapple-bell pepper chutney with a garden leaf salad and a buttermilk dressing.   It looked great. 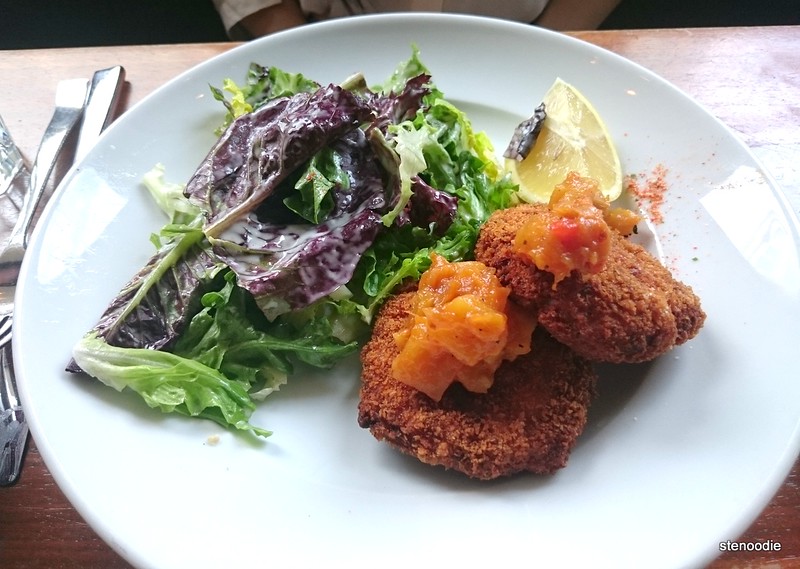 For dessert, I am a chocoholic so I chose the Pecan Chocolate Brownie without a doubt.  It came with a cherry compote of fresh cherries that were pitted and halved.  The cherries were so fresh and perfectly sweet!  The chocolate brownie was SO soft that my fork just slid into it when taking the first bite.  It didn’t taste too much of pecans though which was kind of a good thing because I’m not a big fan of nuts.  I loved this chocolate brownie and the cherry compote!  Fresh cherries! 😀 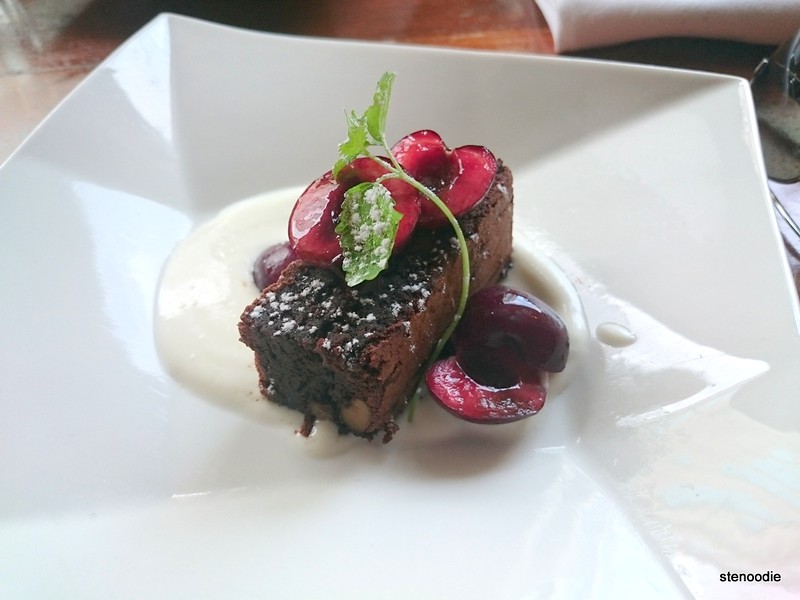 Cherry (lol, I was making the joke that she was on the menu because of her name :P) ordered the Ontario Farmed Strawberries which came with a vanilla bean ice cream and a big cardamom shortbread.  I tried it and really enjoyed the fresh Ontario strawberries and the fresh vanilla ice cream.  It was so good!  The shortbread was chunky and soft. 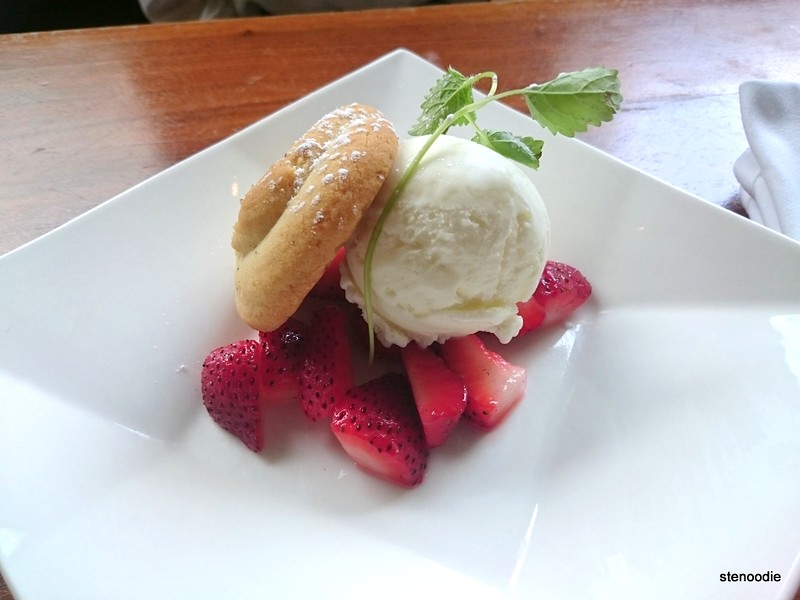 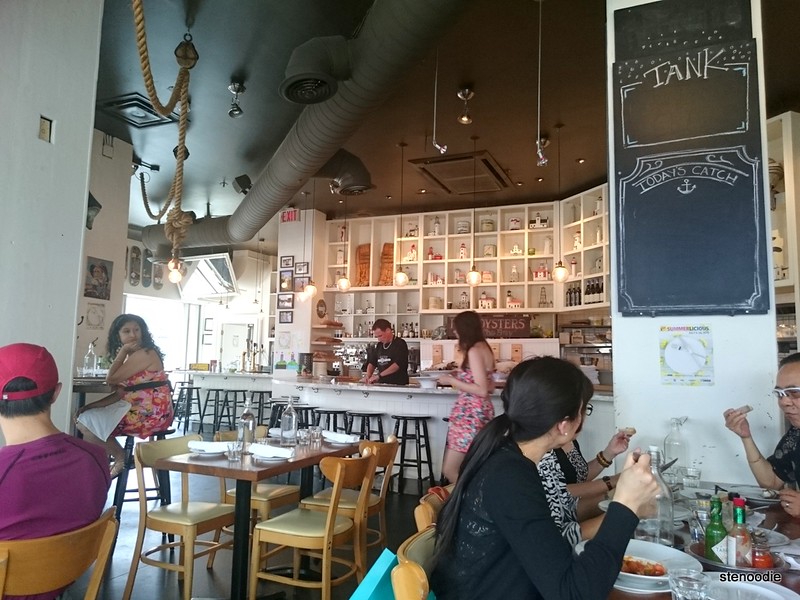 I really enjoyed my lunch here at John & Sons.  I feel like this is a place you need to come back to time and time again to try their different varieties of seafood dishes and food in general.  They are a solid restaurant and I do recommend it.

Have you been to John & Sons Oyster House before?  What are your thoughts on it? 🙂 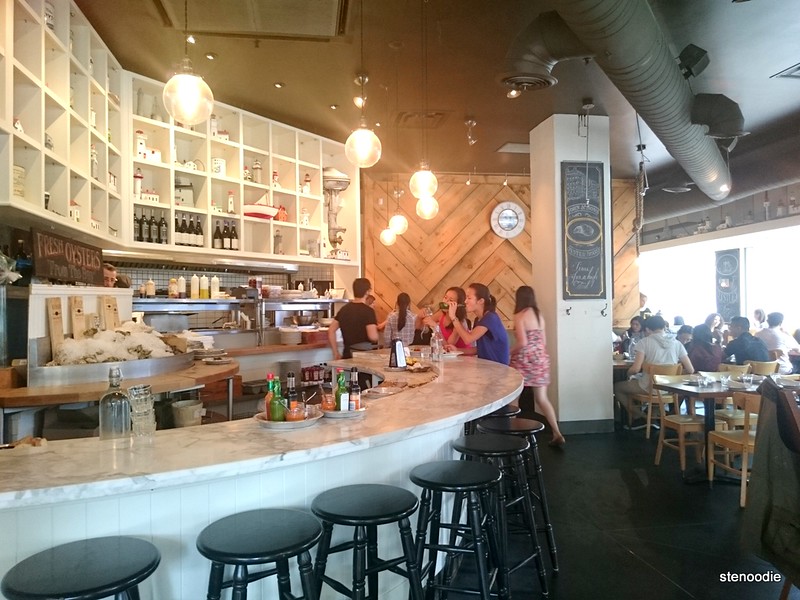 You can see the oyster bar too