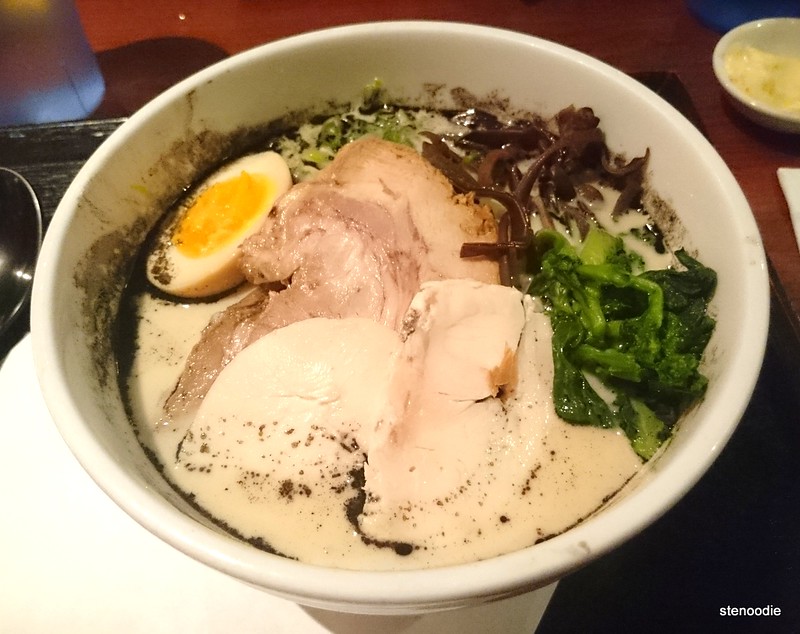 The ramen-hoping duo, Zulu & Banh, invited me to one of their famed ramen tours.  They have been to over 20 ramen houses around Toronto and the GTA, looking for the best Japanese ramen noodles, toppings, and soup base.  I was really excited to try out Ramen Raijin with them and our friends since it was my first time to this ramen house and I wanted to join them on their 21st ramen meal. 🙂

Ramen Raijin is located on 3 Gerrard Street East, just a 2-minute walk from College Station in downtown Toronto.  They are a true Japanese ramen house where the staff and chefs are Japanese — authentic noodles!  They are a part of the Zakkushi Group, a group of restaurants serving izakaya and ramen that started in Vancouver in 2014 (they also own Zakkushi on Carlton in Toronto).  Ramen Raijin was taken over by the Zakkushi Group in Toronto in October 2013.  Unlike most of the ramen houses in Toronto, there was no line-up when we went in.  It also helped that Zulu & Banh made a reservation for a table of 8.  Ramen Raijin has a large space for not only two-seaters, but large tables for 4-8 — like Lu mentioned, not many ramen houses have tables that seat that many.  This is a great place for groups! 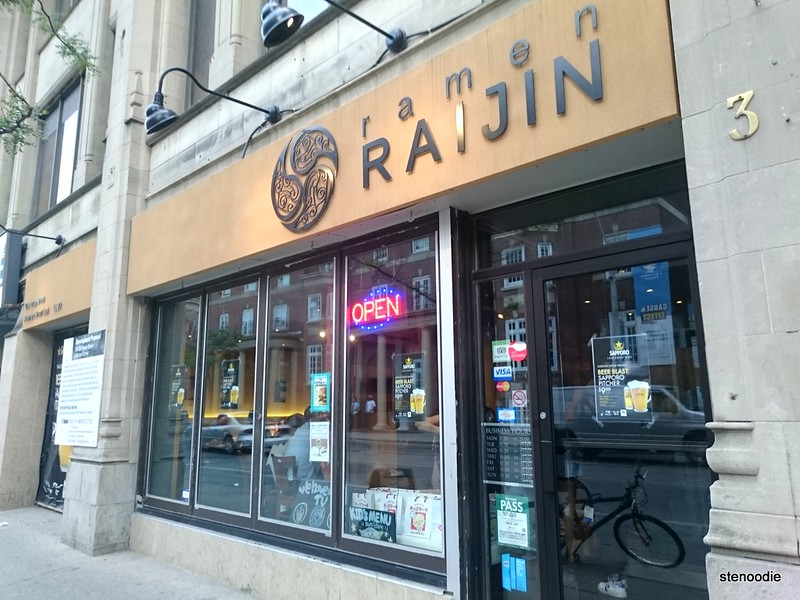 They are modern, sleek, and clean

The service that day was fast and efficient.  By checking in on Facebook and liking their page, you can also get an extra free topping on your bowl of ramen.  So awesome!  We had to each check in on our phones and also show the server so that we could add in the request for an extra topping — a little inconvenient but they just really want to make sure we do our social media work to help them promote the restaurant.  It’s fair! 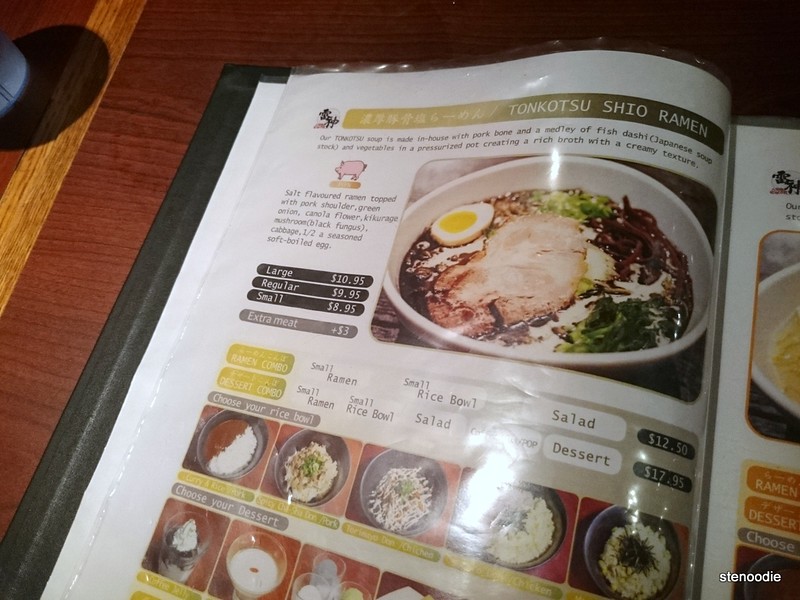 I ordered a small bowl of the Tonkotsu Shio Ramen with the extra topping of Chicken Breast Char-Shu.  I also ordered a Karaage appetizer since I always like to see how the restaurant makes it compared to the other ramen or izakaya houses. 😀

The Tonkotsu Shio Ramen is a salt flavoured ramen topped with pork shoulder, green onion, canola flower, kikurage mushroom (black fungus), cabbage, and half of a seasoned soft-boiled egg.  Their Tonkotsu soup is “made in-house with pork bone and a medley of fish daishi (Japanese soup stock) and vegetables in a pressurized pot creating a rich broth with a creamy texture”. 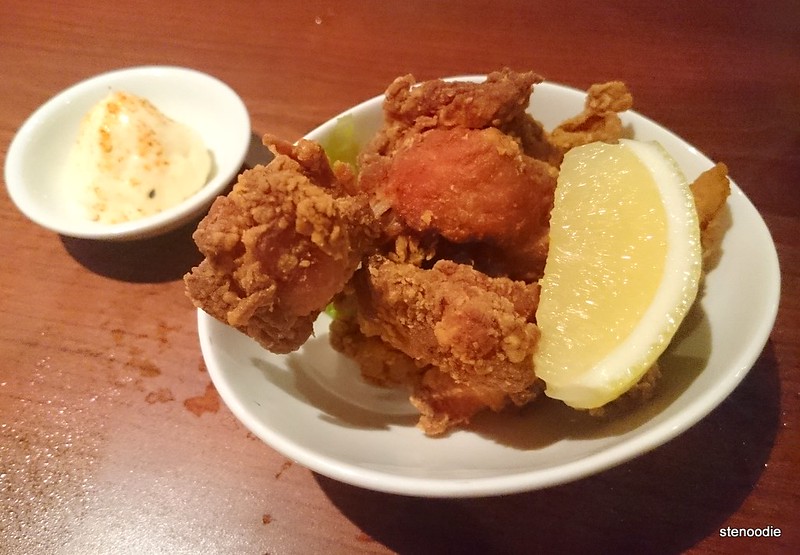 First of all, my karaage (Japanese fried chicken) arrived first.  It came in a small bowl with a side of Japanese mayo.  It was actually a really small tiny portion with about three pieces of karaage.  For $3.95, I guess it was about a little more than a dollar per piece.  I thought that the karaage was a little too salty, even for my taste buds, and some of it was fried a little too much so that it was too crunchy.  Regardless, I liked my helping of karaage to start off the ramen meal. 🙂 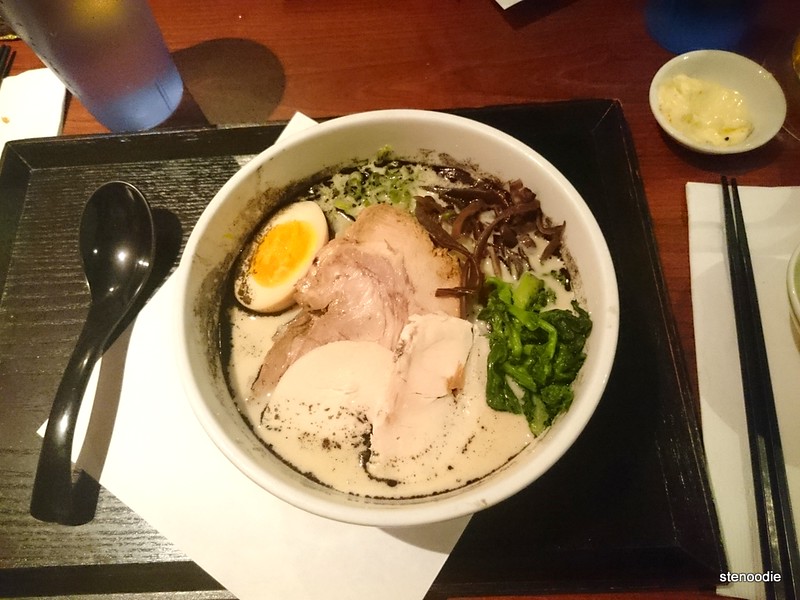 My bowl of Tonkotsu Shio Ramen arrived.  It was a nicely presented bowl of ramen with the ramen noodles nestled within the Tonkotsu soup, the finely chopped green onions to the side, the cabbage slices underneath the soup surface, and the seasoned soft-boiled egg, slices of pork shoulder, and chicken breast char-shu resting on top of everything.

I first took a sip of the soup and I was impressed with how creamy and smooth it tasted!  It also had a hint of seaweed flavouring to it, which I thought was interesting because there wasn’t any seaweed listed in the ingredients.  It was very smooth and I couldn’t stop drinking it for a while. 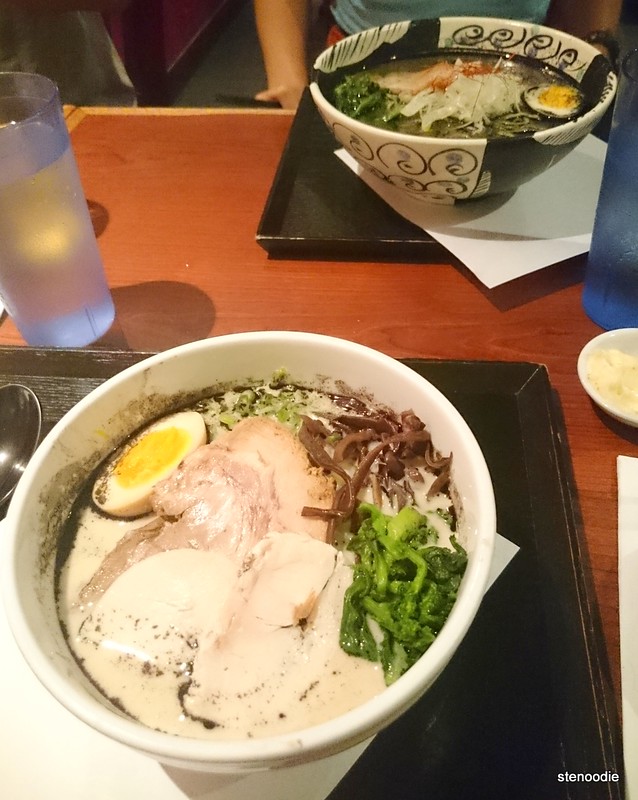 Across from me, Vanessa ordered a bowl of Bamboo Charcoal Dark Tori Miso Ramen, something that Lu recommended as well

Next, I tried the ramen noodles.  They were very good!  Very chewy, thick, and just right.  It just had the taste of being authentic “ramen” noodles.  These were the real deal for sure!  It was happily impressed with the quality of the ramen and quite satisfied!

I also really liked the green onions and how finely chopped they were.  They were fresh.  The slices of pork shoulder were very soft, smooth, and tender — all the most important qualities.  It was nicely flavoured too and easy to chew through.  The chicken breast char-shu was also the same consistency in texture.  It was tender, fresh, and smooth.  Great choice of topping! 😀 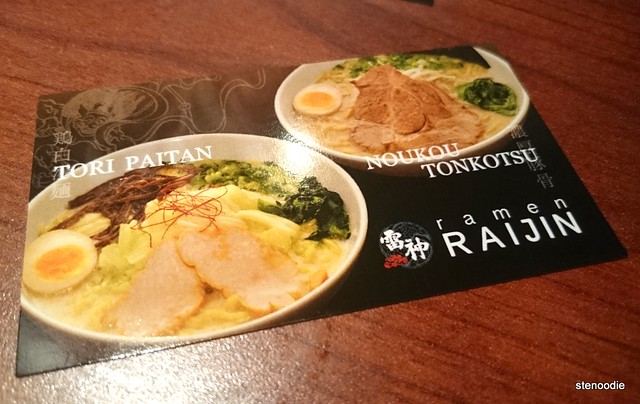 All in all, it was a great ramen meal and I’m so glad that I got to try out this popular spot that is frequented by Ryerson students and ramen lovers (Ryerson university is just off the street and they used to have a special deal for their Ryerson students).  I’m glad that I ordered a small bowl so that I could try it out and not overeat.  For people who like to feel more full, perhaps a regular or large bowl would be best.  They also feature a ramen reward program where if you eat up to 10 bowls of ramen, you get the 11th bowl free.  Zulu & Banh have been able to rack up a lot of points due to their frequent ramen outings.  Props to them! 🙂

Have you visited Ramen Raijin before?  What are your thoughts about it compared to other ramen houses?