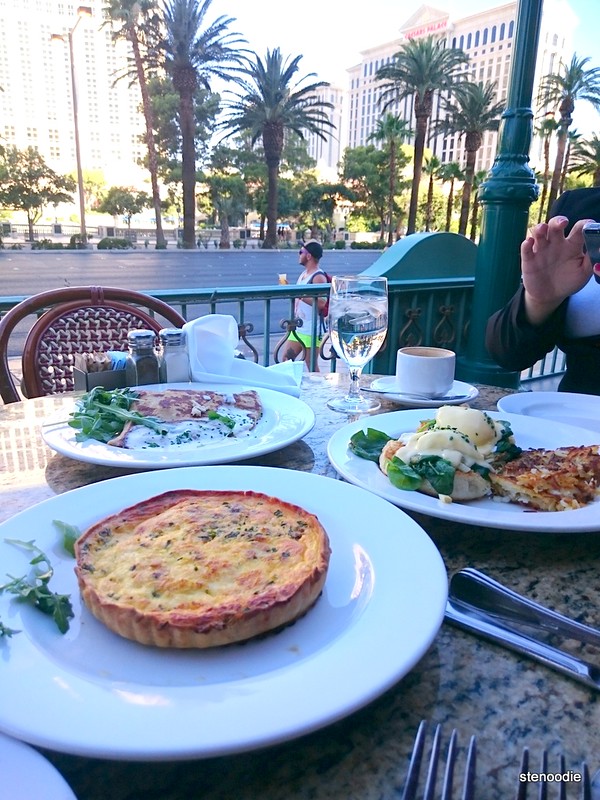 Right before we headed for our very first day of the Las Vegas 2015 Bootcamp, three of us headed towards Mon Ami Gabi for breakfast. We wanted to be there extra early so that we could have time to savour the food before we had to line up at the convention hall.  Funnily enough, even though we wanted to have an early breakfast, they actually didn’t open until 7 a.m.  We waited a few minutes in front of their doors before they prompted opened at 7.

We chose to sit on the outside patio even though I was a little fearful that the Las Vegas humidity would make for an uncomfortable meal.  However, since it was early in the morning, there wasn’t such humidity yet and we had a very nice view of the strip!  It was absolutely fantastic.  It’s one of those dream breakfasts that you wish to have on the patio because it’s overlooking an incredibly awesome view with nice weather. 🙂 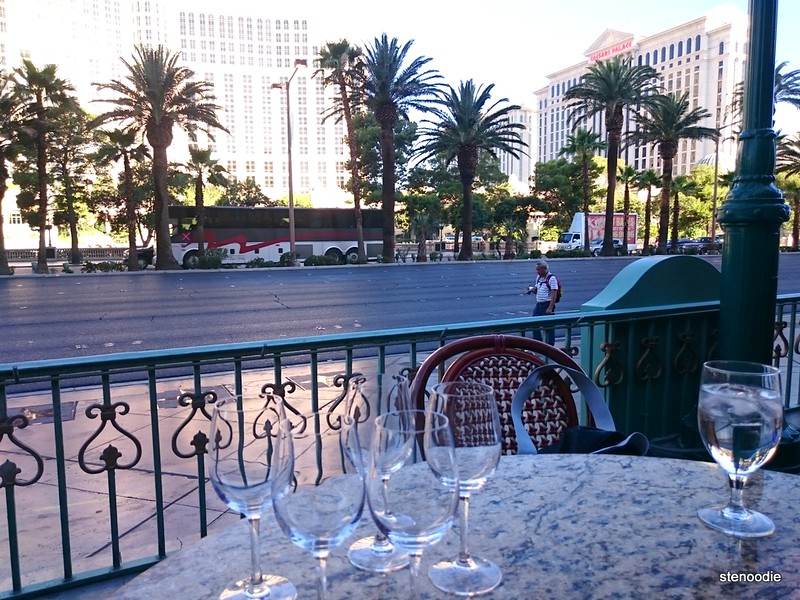 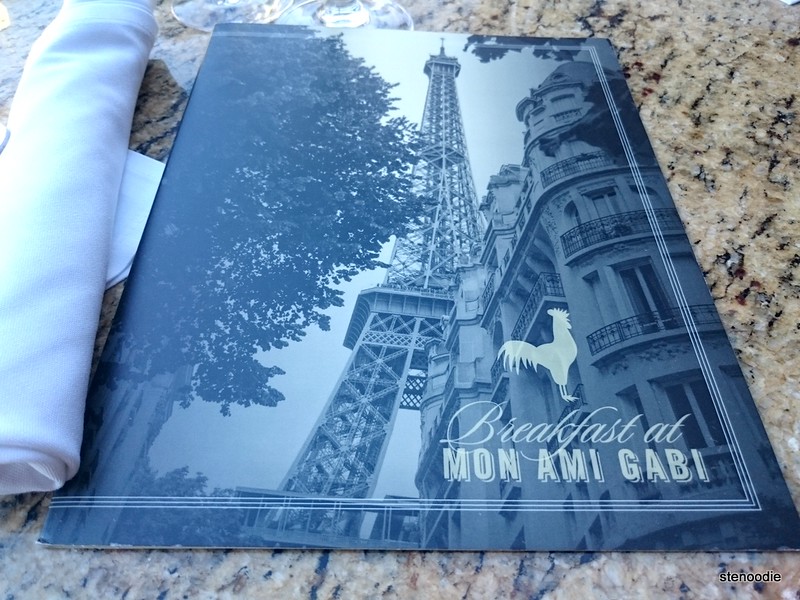 We decided to order three breakfasts to share amongst the three of us (they serve traditional and French breakfast from 7 to 11 a.m.).  Service here was professional and prompt but a little stuffy I found.  We ordered Eggs Florentine (I actually don’t remember trying this ever before), Classic Quiche Lorraine, and a Chicken, Brie & Apple Crepe.  I knew that Mon Ami Gabi is a French bistro well known for their crepes and steak & fries, but unfortunately we weren’t able to try their sweet crepes this time. 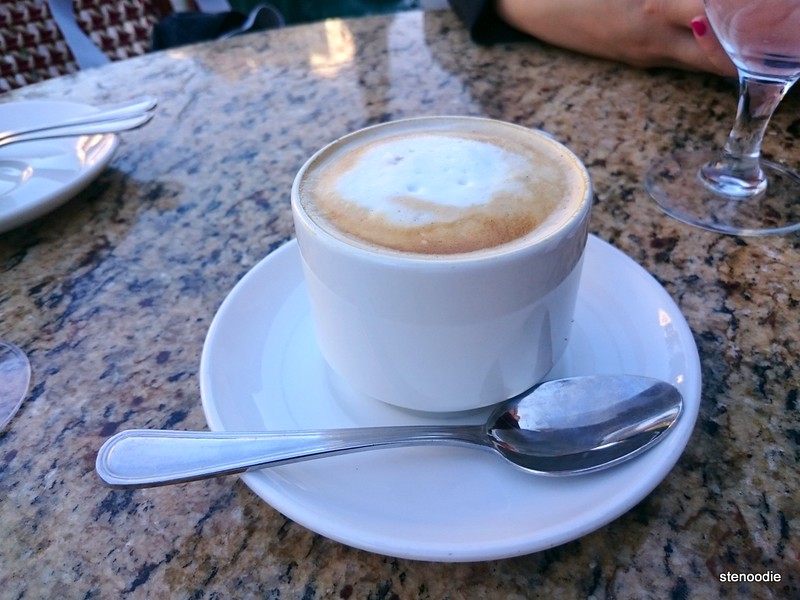 Our food arrived in a timely matter and we all took a little bit of time to take pictures of the food before we started eating. 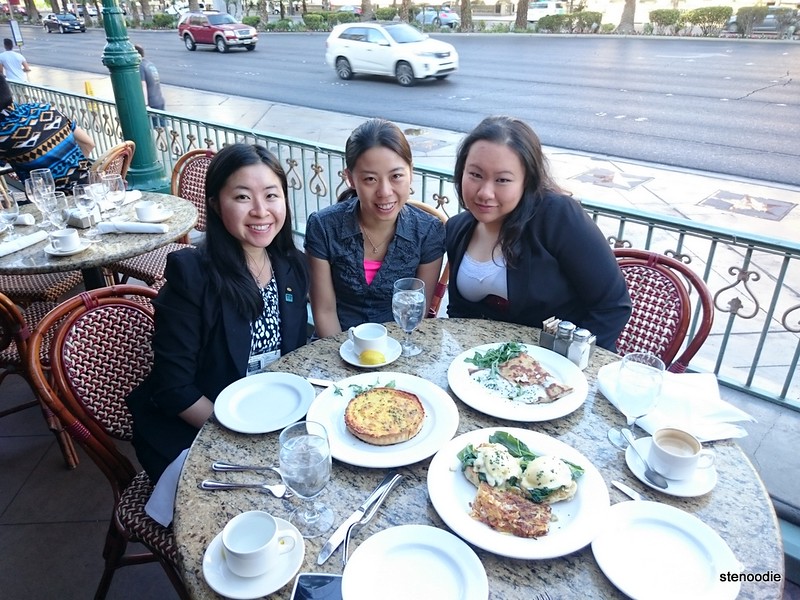 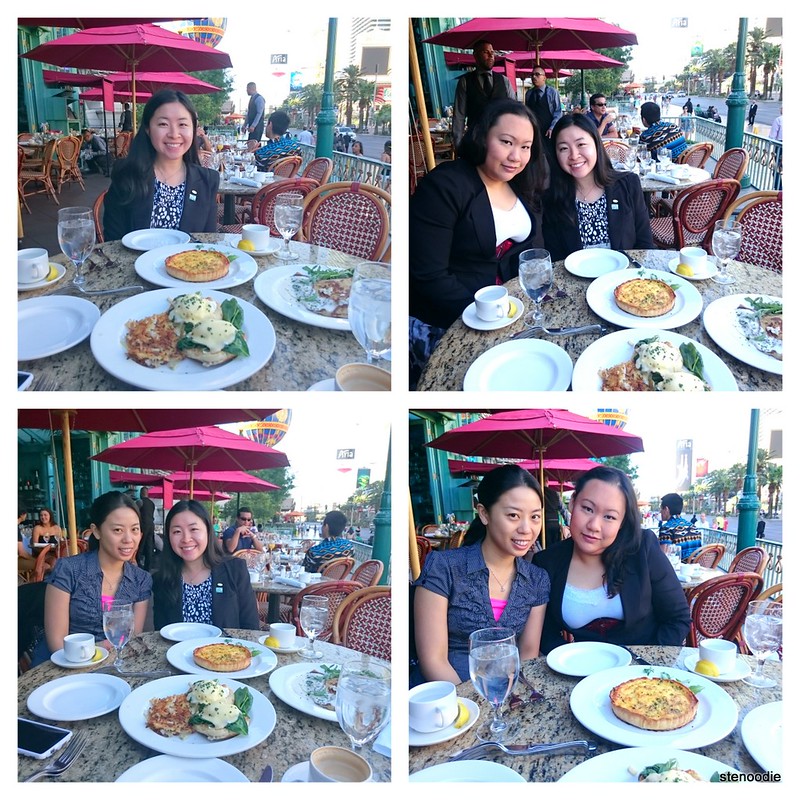 Pictures before we ate! 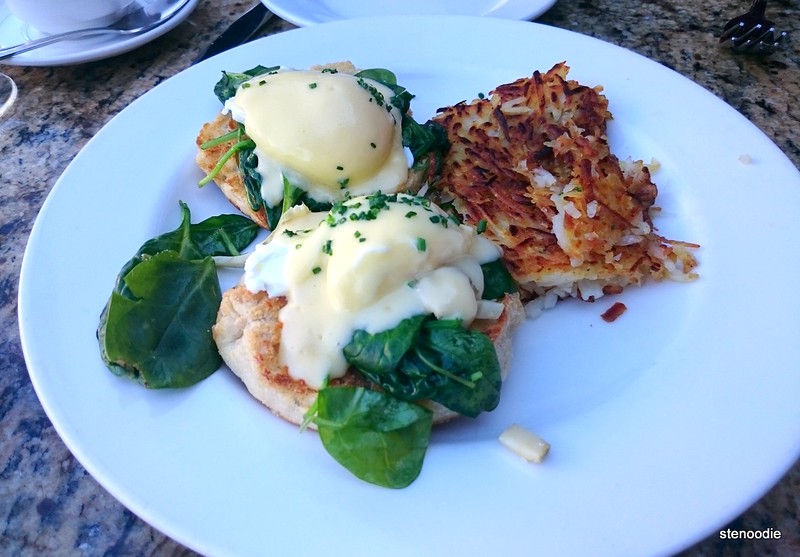 First, I tried the Eggs Florentine.  Usually, I would love to order their Eggs Benedict to see how it fares with other restaurants’.  However, Eggs Florentine was a good pick too because I had never tried it before.  It contained spinach, artichoke, and hollandaise sauce with some hash on the side.  It was okay.  It wasn’t particularly flavourful probably due to the tame tastes of the spinach and artichoke.  It needs something stronger like bacon or ham to make it stand out. 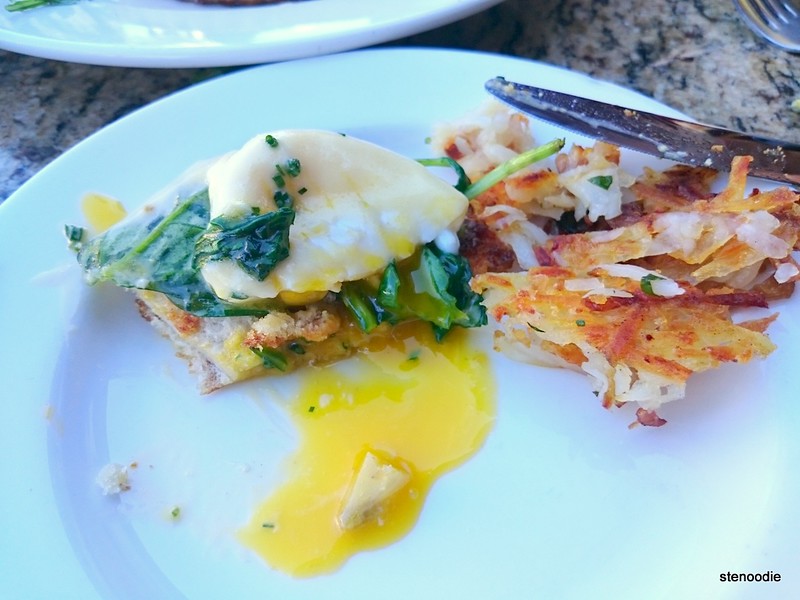 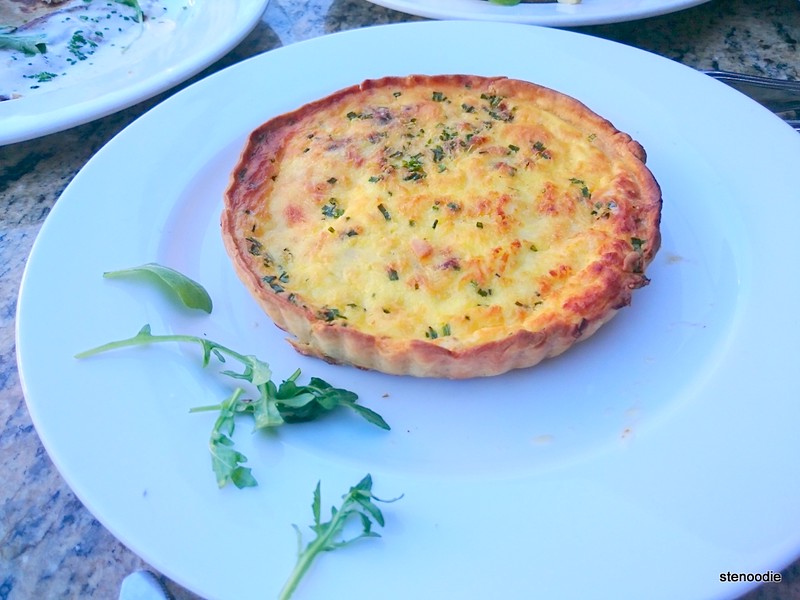 Next, I tried the Classic Quiche Lorraine.  It contained bacon, jarlsberg cheese, and caramelized onions.  It was actually not as great as I expected.  I usually love quiches because they can be so juicy, flavourful, and soft inside with the egg mixed into everything.  This quiche was a little dry inside and I didn’t think it was that great. 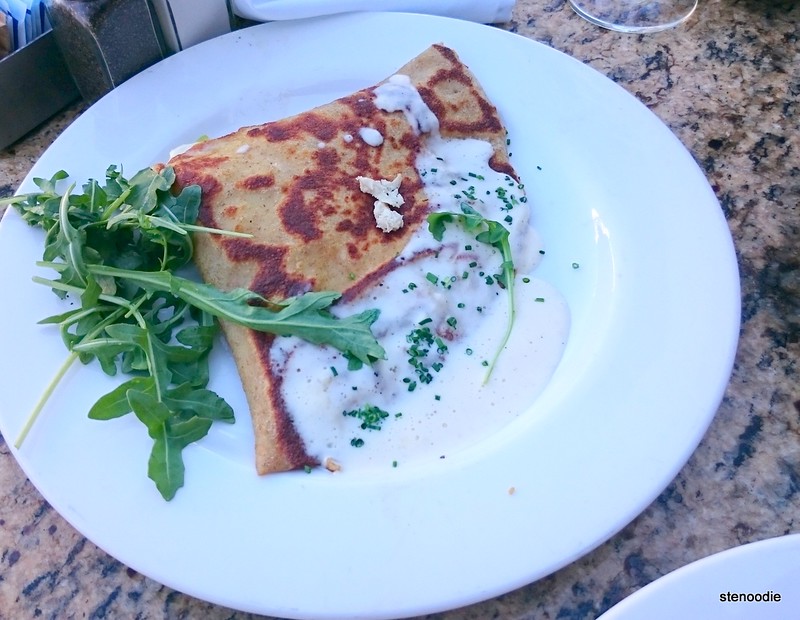 Lastly, the Chicken, Brie & Apple Crepe actually was the best dish out of the three that we had.  The apple inside the crepe was fresh and gave a refreshing and tangy taste to the crepe.  This one was really good and I really liked it! 🙂  However, I also have to note that the crepe, although thin, was also a little dry.. 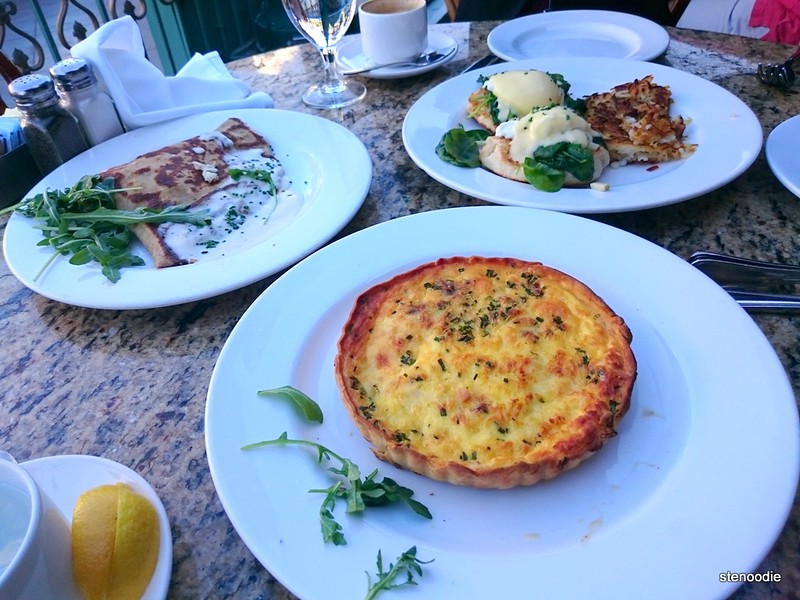 After that, we left towards our first day of the Bootcamp!  I’m really glad that we got to try breakfast at Mon Ami Gabi.  I was truthfully a little disappointed though because I really expected this posh French restaurant that is quite well known to serve truly delicious dishes 100% of the time.  Since I only enjoyed one out of the three dishes, I was expecting more.  However, in the future, I’m still up to try their sweet crepes and their well-known steak and frites. 🙂 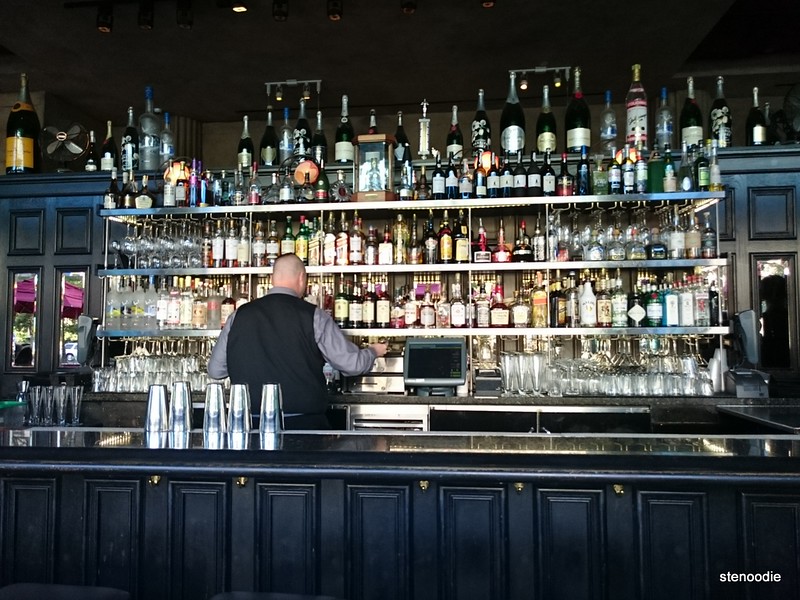 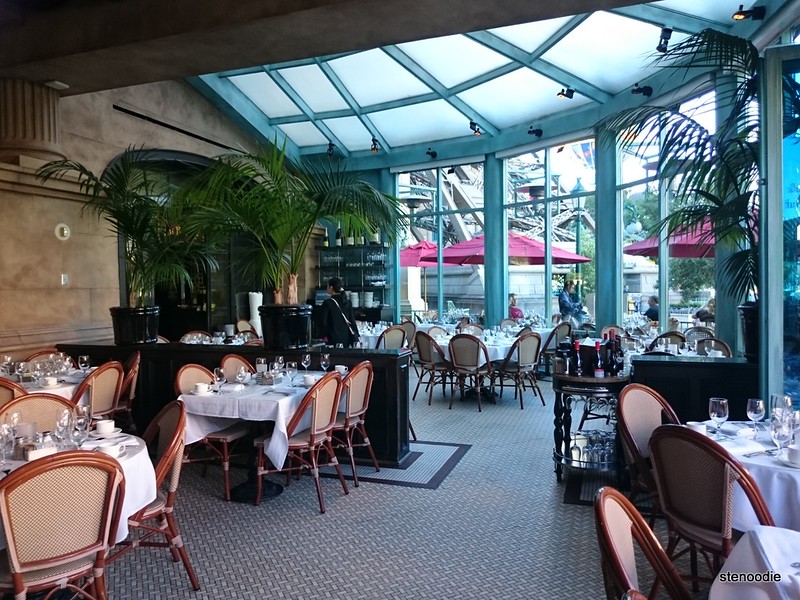 It is so nice here! 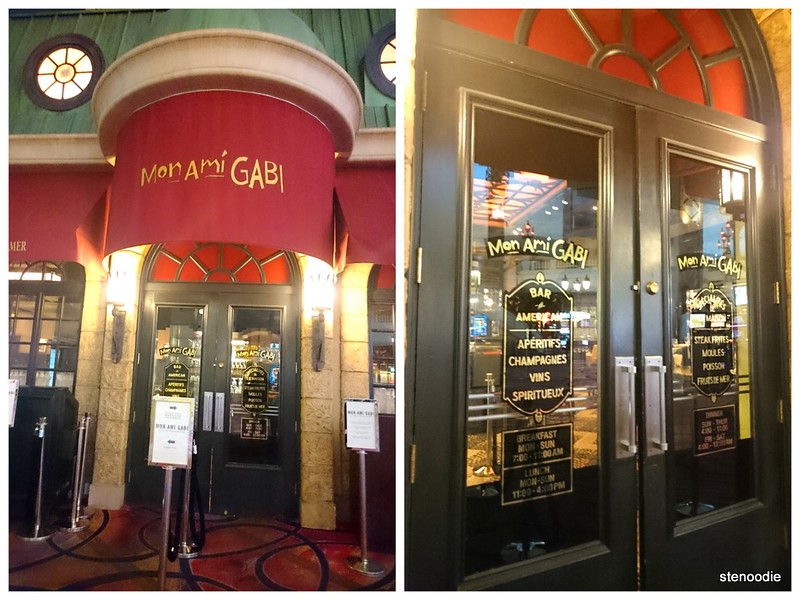