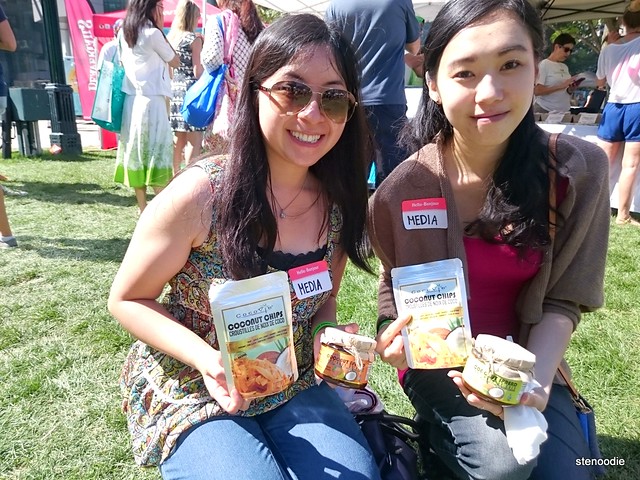 Did you know that there is an annual Coconut Festival hosted in downtown Toronto every year?  This is their second year of hosting it!  This year, they hosted the Coconut Festival 2015 at the David Pecaut Square which is right next to Roy Thompson Hall.  It is just a two-minute walk from St. Andrew Subway Station and was the perfect spot to have an outdoor coconut-focused festival!  There were many tents all set up on the grass with many food vendors, product vendors, and small local businesses there along with some food trucks on the side.  There was also a stage for some performances that ran throughout the afternoon.  The Coconut Festival ran the weekend of Saturday, August 22 to Sunday, August 23 from 11 a.m. to 7 p.m. 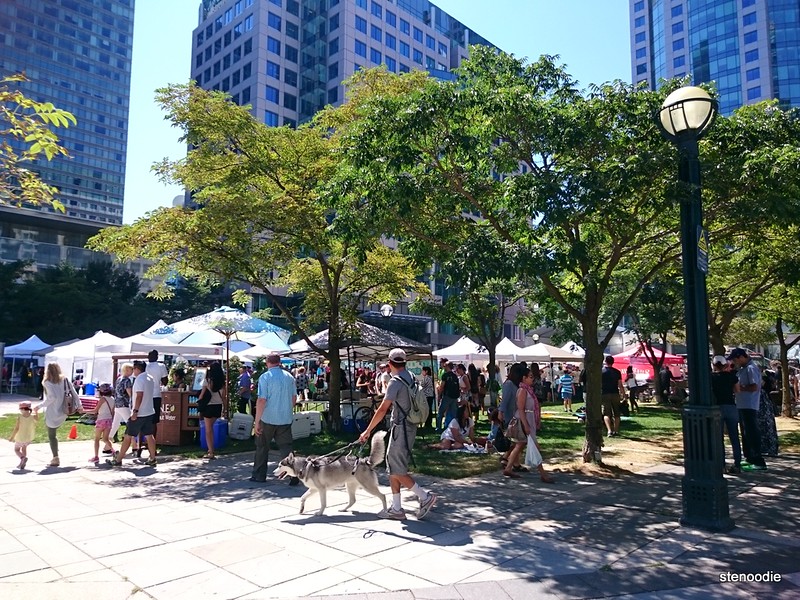 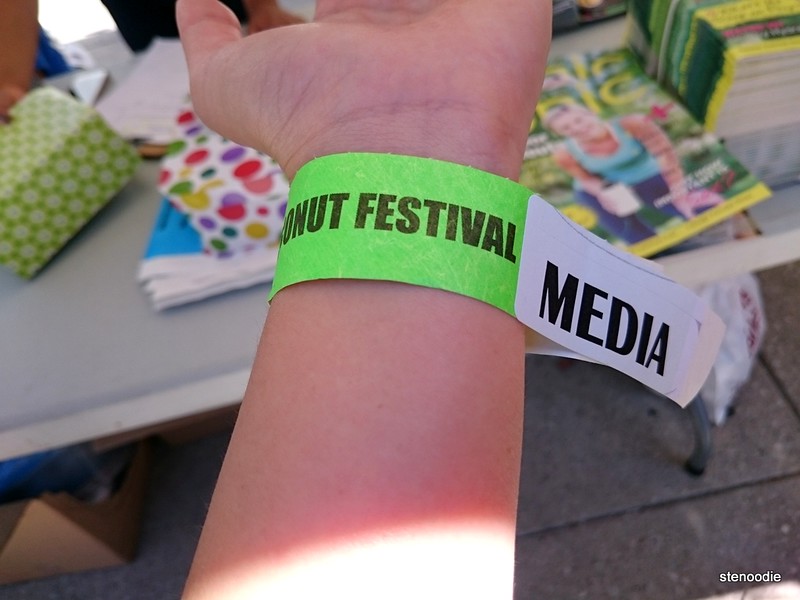 Also, admission was completely free!  I don’t think many people knew about this event; I certainly didn’t.  Thank you to Mark for informing me about this great festival and introducing us to the vendors and sampling at various vendors! 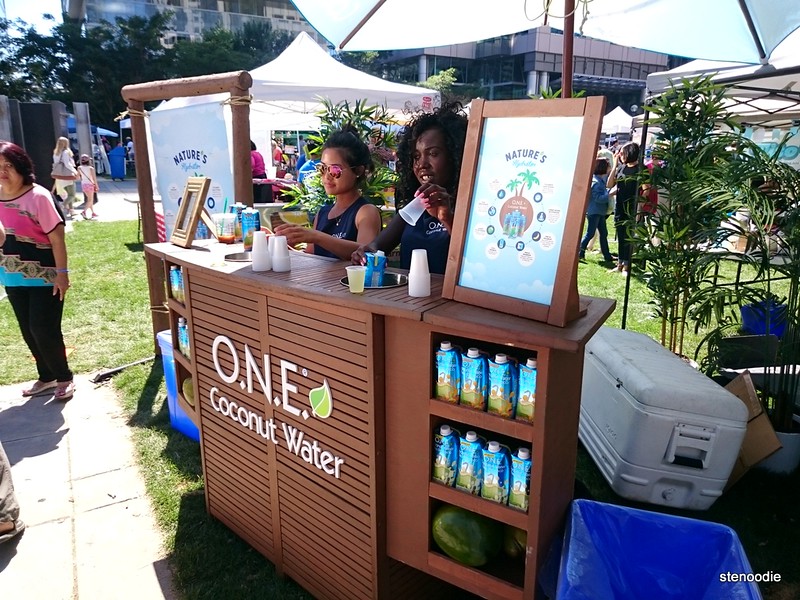 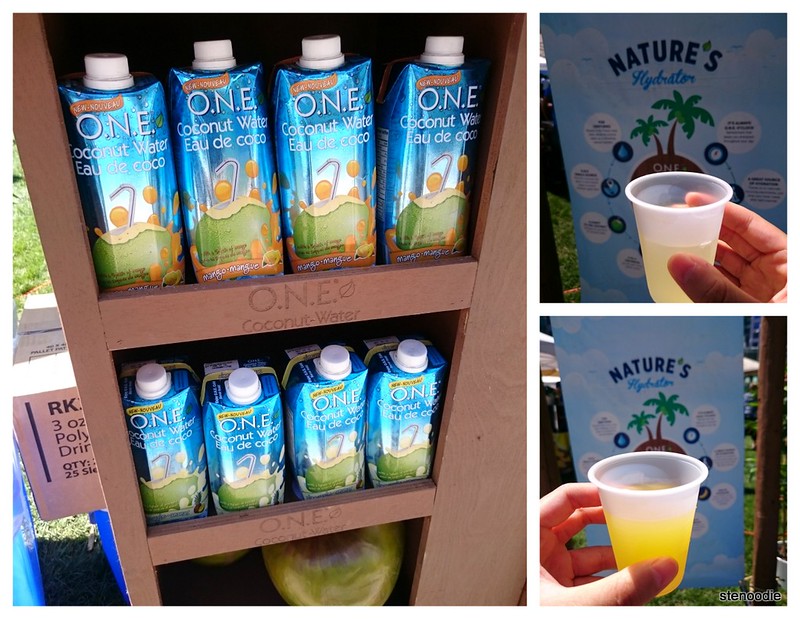 Alice and I arrived there a little after 1 p.m. and the festival was already bustling with people.  It was a fantastic summer day with the sun out, a slight breeze, and no humidity.  The first vendor we visited was none other than a coconut water company called O.N.E. Coconut Water.  We got to try two flavours, one pineapple and one mango.  Both were very lightly flavoured but the mango one tasted better.  This was a great start since we were hydrated! 🙂  I actually really like O.N.E coconut water as they are usually the brand that I see in the supermarket and what I purchase when I have had a hot and dehydrating day.

I stopped by Tito Ron’s tent to say hi.  These guys are one of the best food vendors out there because they care so much about their customers and the bloggers that help them spread the word of their delicious Filipino treats and food.  I tried the Lumpia Trinidad from them this time. 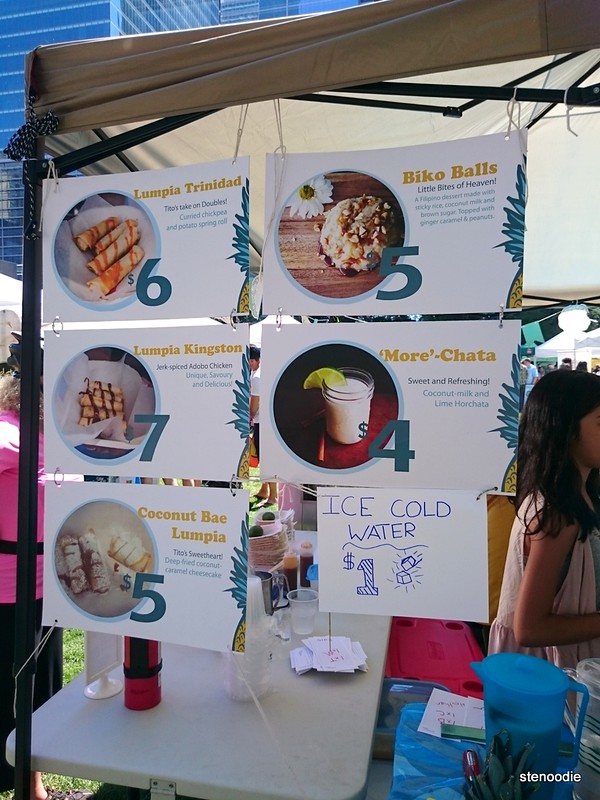 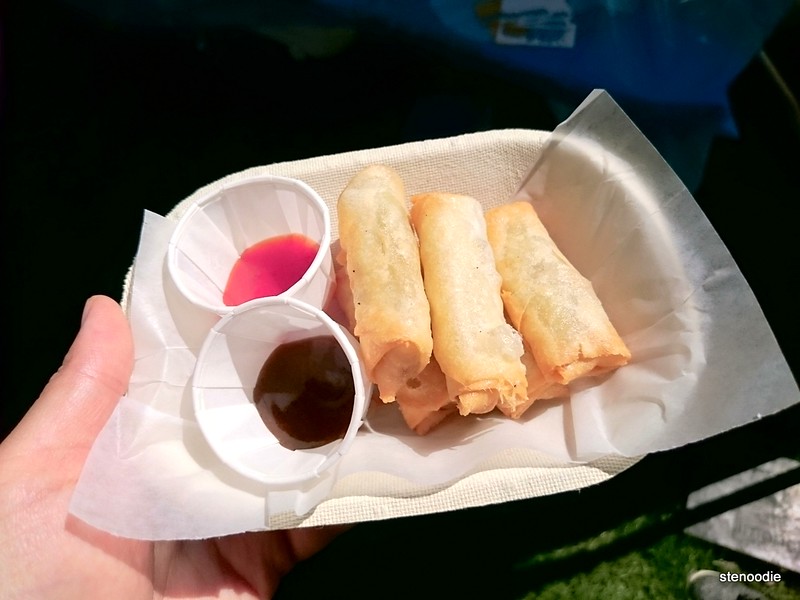 This was sample size and came with a taramind sauce and a spicy sauce.  The curried chickpea and potato spring rolls were pretty good and didn’t taste very strong in curry flavour at all.  I don’t think I’ve tried their Lumpia Kingston yet (jerk adobo chicken), so that will be next on my list the next time that I see Tito Ron’s at an event.  Oh, and also I want to try their Biko Balls too! 🙂

Next up, we stopped by to try the Coco-Roons at Wonderfully Raw.  They have different types of products that are made with pure and organic ingredients.  They sweeten their Coco-Roons with organic maple syrup.  Basically, they are coconut-infused treats!  I got to try the Coco-Roons, Snip Chips, and Brussel Bytes.  It was pretty tasty! 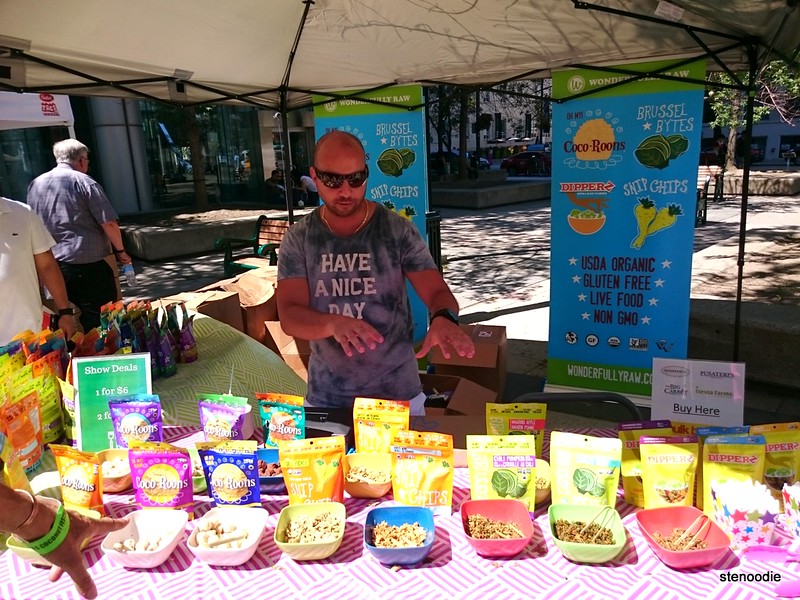 Next up, we got to try the gelato from Grinning Face.  They are a gluten-free, non-soy, dairy-free, nut-free gelato that is homemade.  They had a lot of flavours for us to try and because we were part of the media, we also got to try a full-sized version of the gelato too! 🙂 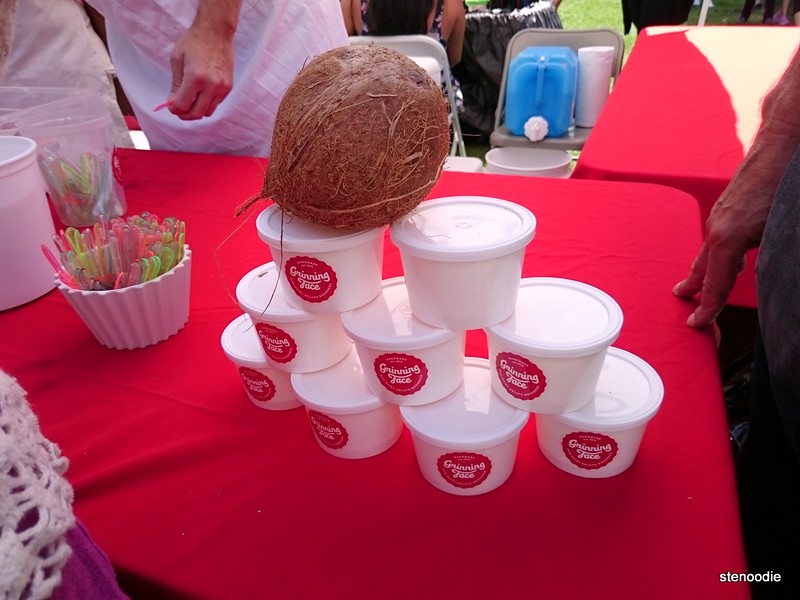 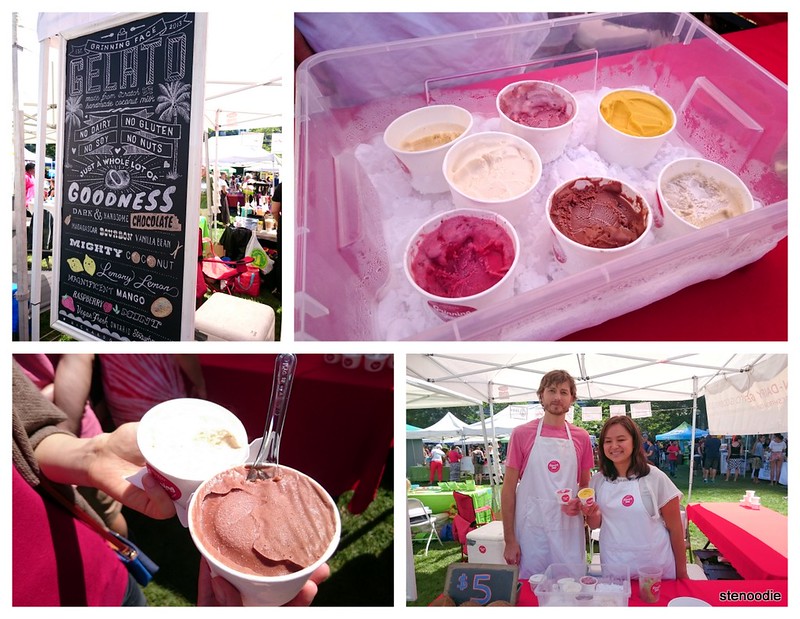 The gelato was very smooth and very light.   Alice chose the vanilla one and noticed more of a coconut milk flavour in it than the chocolate one that I had.  Nevertheless, I thought it was a great treat to have on such a hot summer day! 🙂 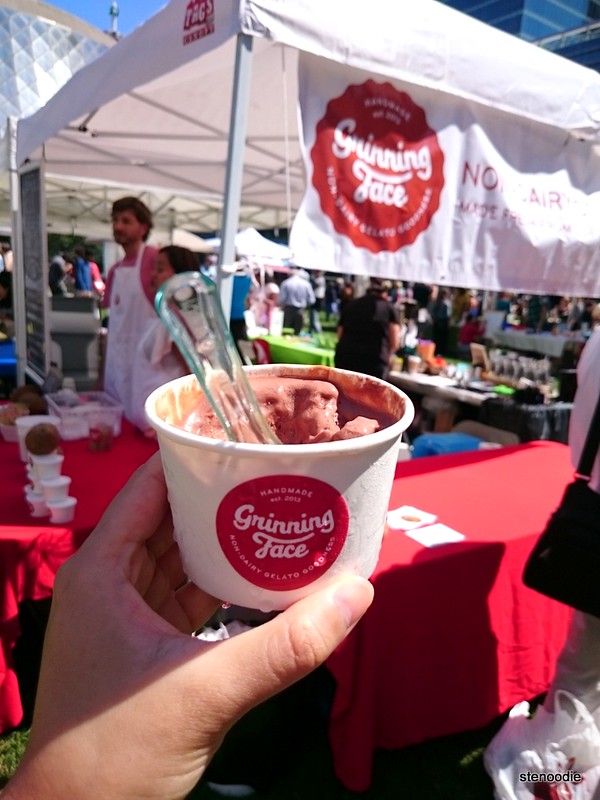 We also did a short video footage with Mark:

Next up, we visited the vendor called CocoVie Naturals.  They feature everything coconut-related including coconut spreads!  I’ve never had coconut spread before and tried a sample of the mango coconut spread and it was delicious!  It tasted so good!  We got to take home some of the products too as part of the gift basket including the spread and the coconut chips. 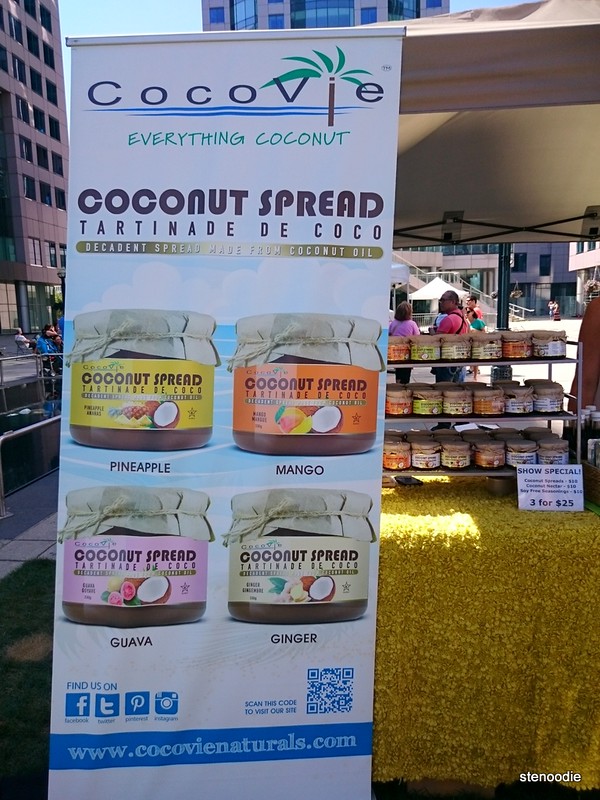 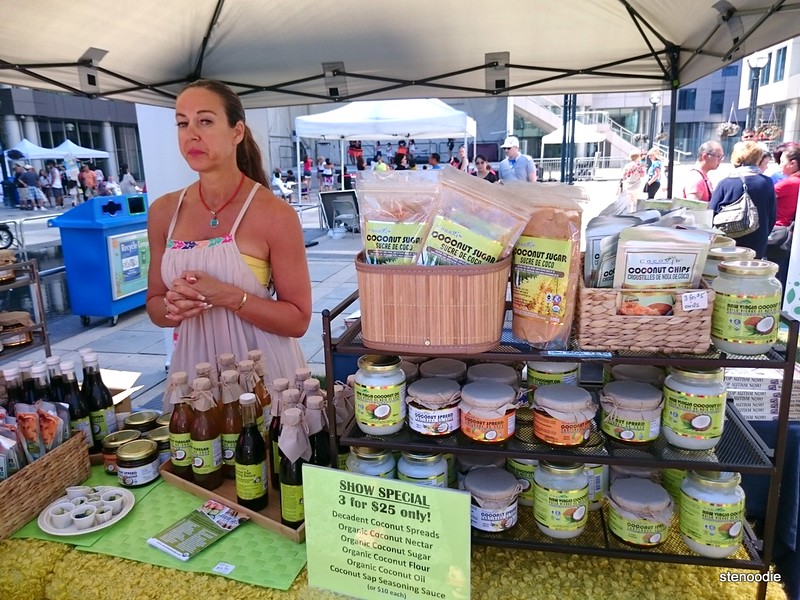 We tried the raw vegan cheesecake at Health e Nut and I was so impressed with how delicious it was!  We tried a little bit of the Mint-Choc Bounty Slices.  It left an incredible minty fresh taste in my mouth including the chocolate that melted so richly.  There was also a lot of coconut slivers in it too.  It was a very decadent and delicious dessert!!  It was one of my favourites to try at the Coconut Festival. 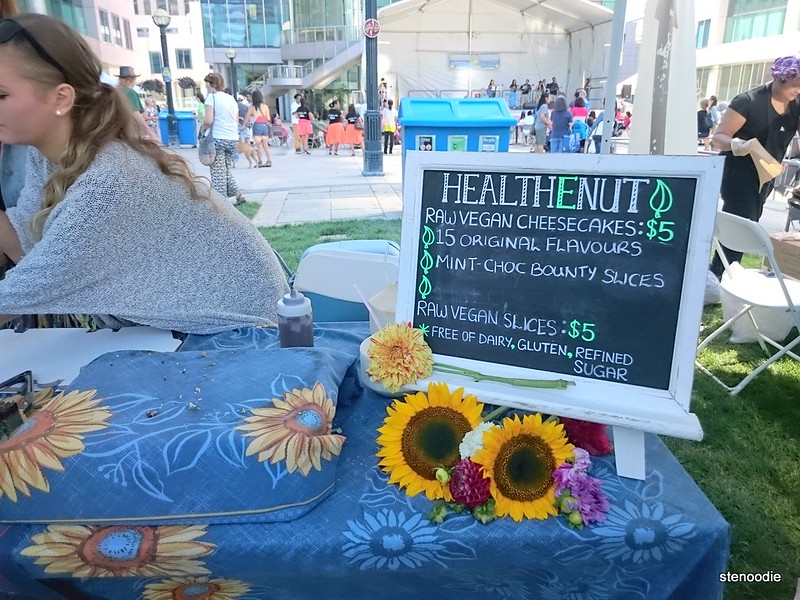 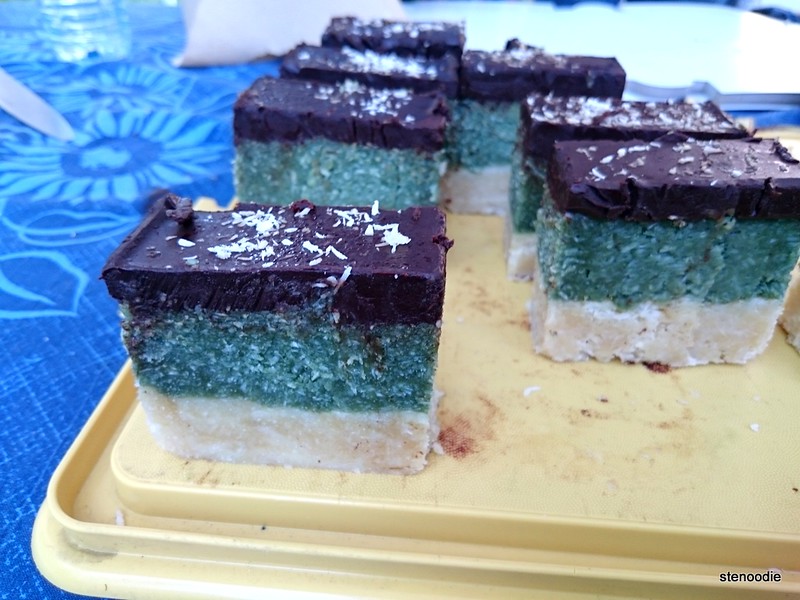 At Cracked Coconut, we were able to try all three of their coconut spreads.  Cracked Coconut contains no preserveatives, no sugar added, non-GMO, is all natural, and 100% clean.  We tried the Pumpkin Chai Spice, Dark Chocolate Macaroon, and Bourbon Vanilla Bean.  Naturally, I really liked the chocolate one, but even the pumpkin chai and vanilla were delicious.  Yum!  It can go great with toast, cookies, oatmeal, pie, and more! 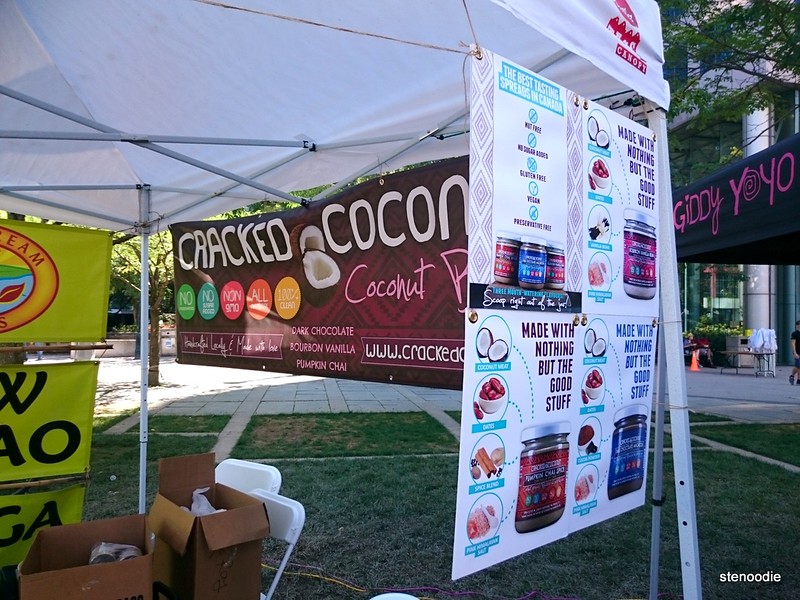 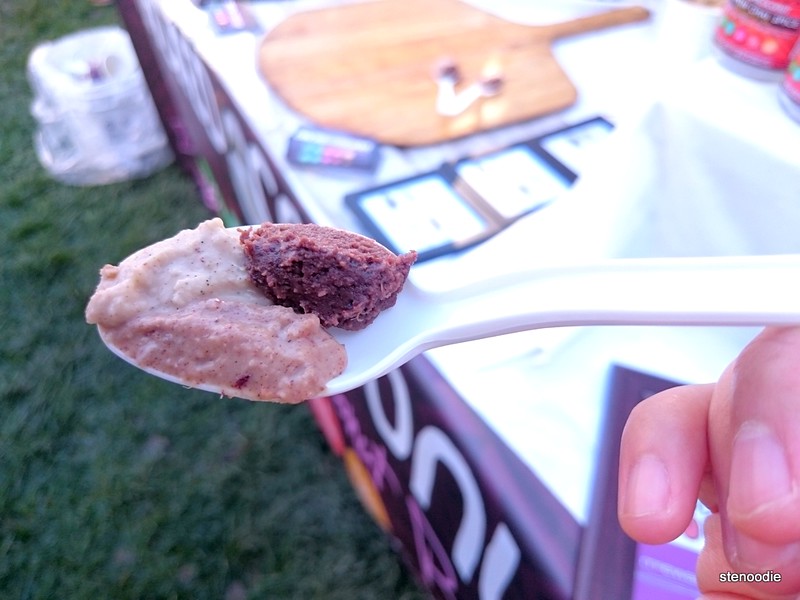 Giddy Yoyo serves organic food products and we were able to try some of their organic chocolate!  They have so many flavours available, some of which include orange, ginger, sweet vanilla, lemon lime, vanilla salt, spicy, mint, and more!  I tried the ginger one and liked the slight spice.  I also tried the xtra dark and really enjoyed it.  Yum! 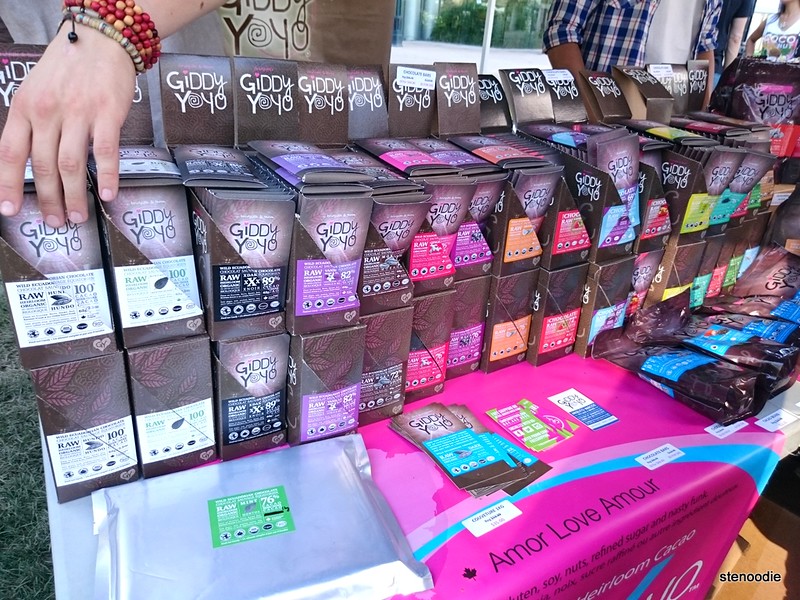 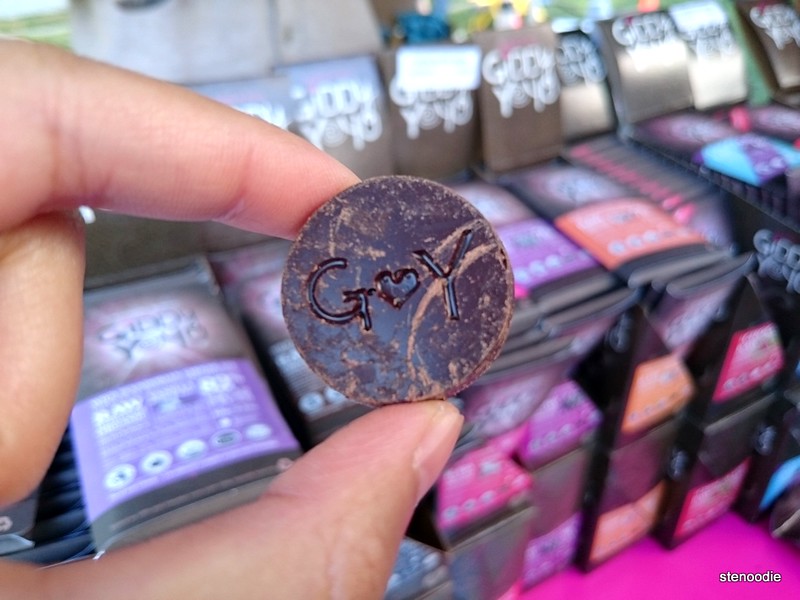 Throughout the afternoon, there were different performances on the main stage.  It was such a wonderful Sunday to be outdoors enjoying food and entertainment. 🙂 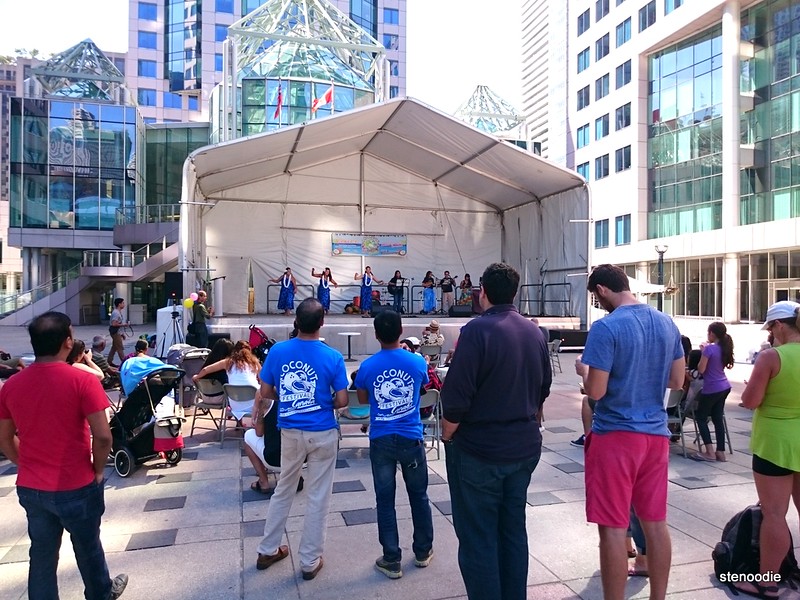 At Living Chocolate, we were able to try the tiramisu as well as the dark chocolate.  It was decadent and rich; exactly what chocolate should be like!  Alice really enjoyed it too.  Living Chocolate is raw, vegan, gluten-free, and organic! 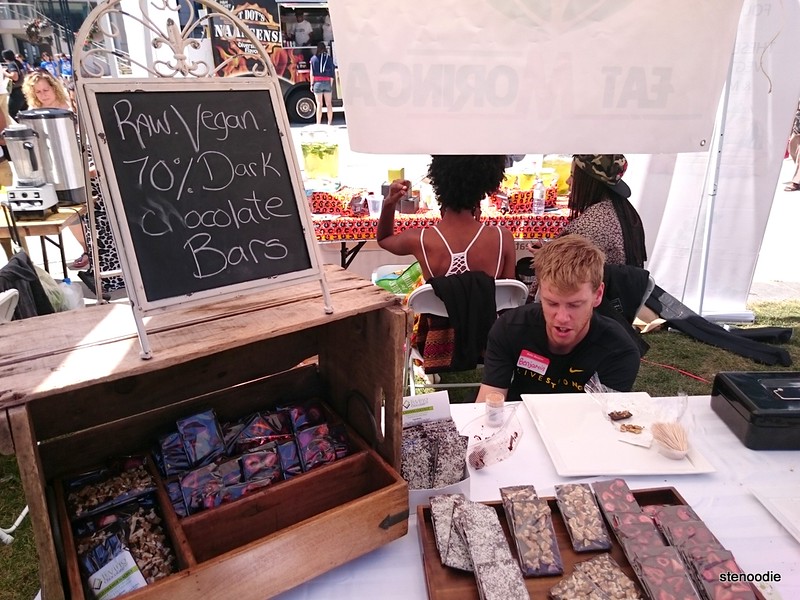 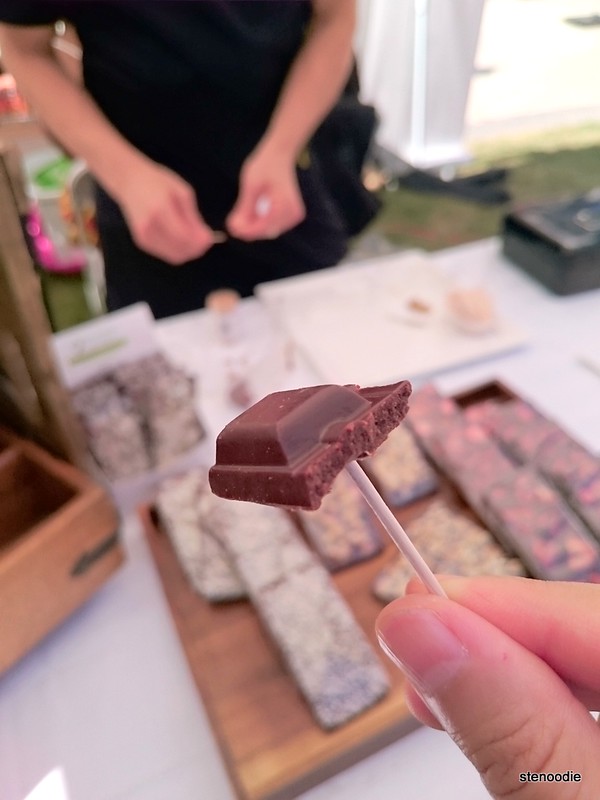 I’ve seen this brand of coconut water before.  Jax Coco is 100% pure, with no added sugar, and no preservatives.  They have the coconut water in not only original but also banana and chocolate too!  Out of the three, I liked the chocolate one. 🙂 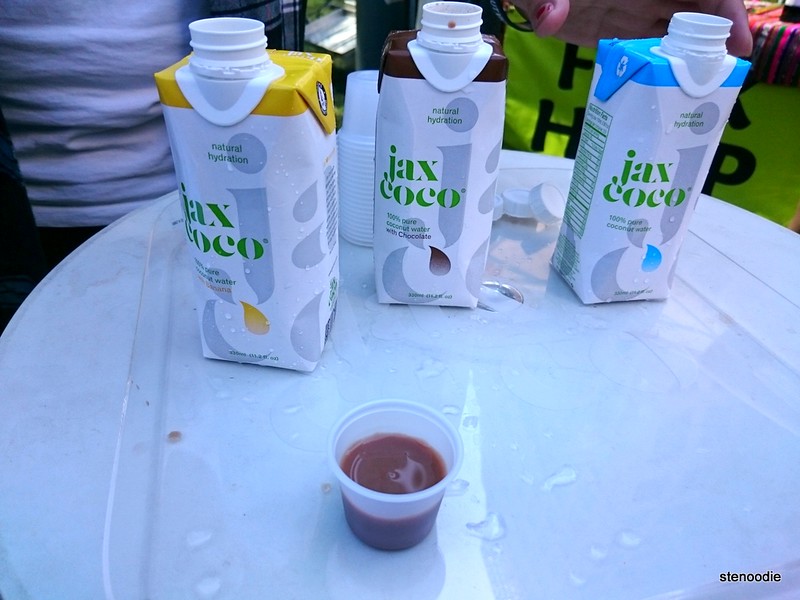 After about an hour or so of sweets and drinks, I decided that it was time for some real food!  The jerk chicken being roasted out there in the open grill looked amazing so I lined up at King Catering for some Caribbean meat!  We tried the Jerk Chicken Poutine.  Thank you for letting us try this out!  It looked great!

The jerk sauce indeed was spicy and the chicken was pretty good.  I wish that the cheese curds melted though; they were cold in the dish.  However, the fries were pretty good. 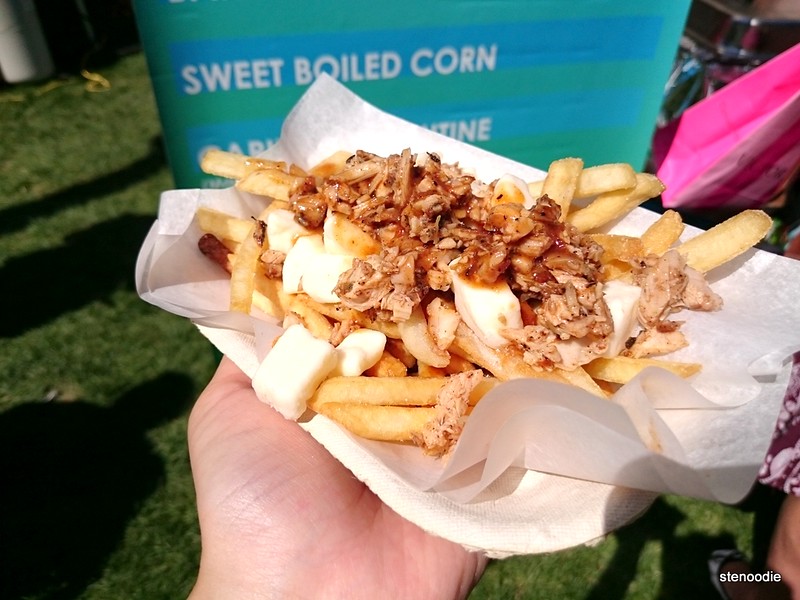 I got to try some fried plantains from Vital-Life Vegan!  They were very generous with their portion and I actually really liked how well made they were.  It wasn’t too sweet either. 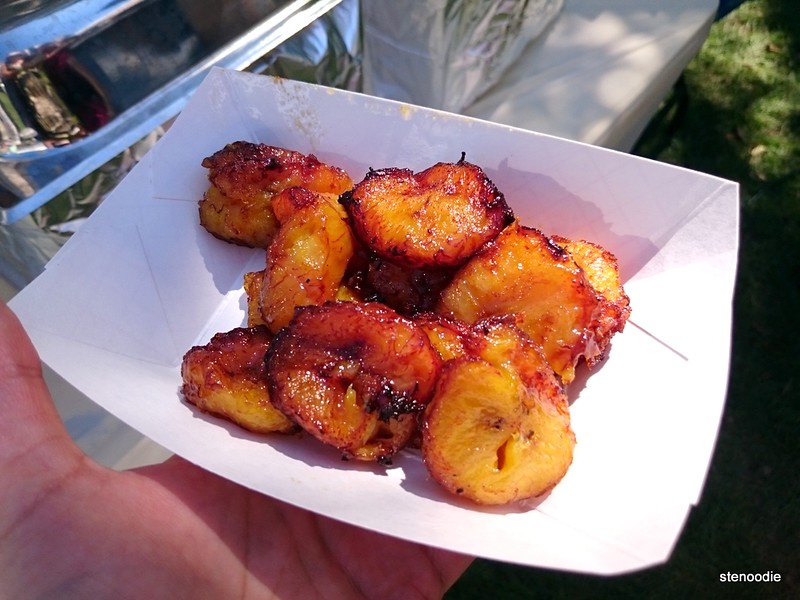 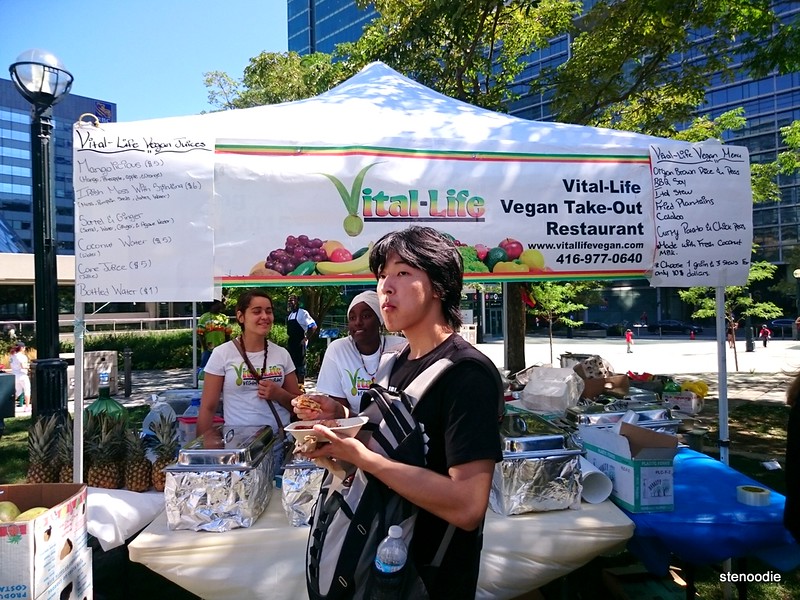 After we had the fried plantains, we went back with Mark and we actually got to try the rest of their vegan food!  One item that stood out was the BBQ Soy Chicken.  It was vegan!  We had the organic brown rice & peas, curry potato & chick peas, and callaloo. 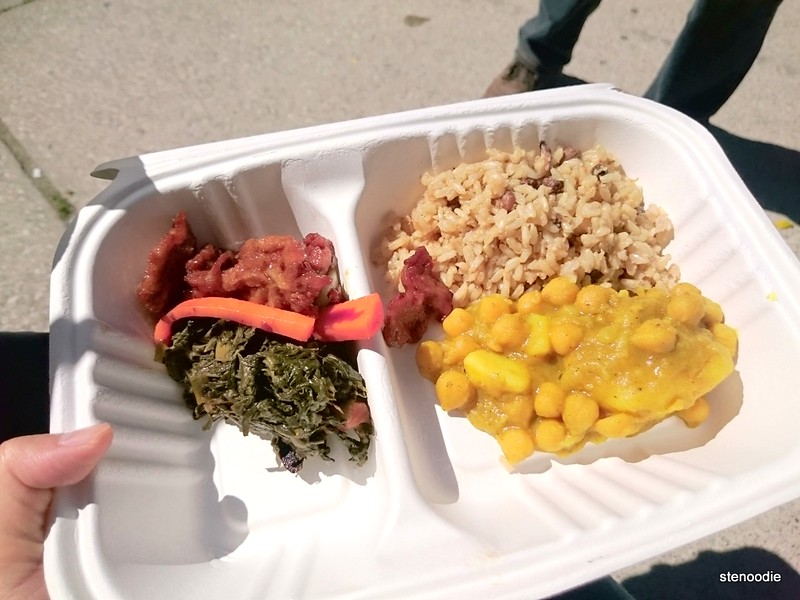 It was actually really tasty, especially the BBQ soy chicken.  It really tasted like chicken even though it was vegan.  The callaloo was unique to me and it was very tasty!  We only asked for a small portion since we were getting full already.

After we collected a few more items, we finished off with the Grass Roots Ktichen where we tried to get a sample of their energy spheres but was only able to get a small tasting.  It was pretty good but I wish I actually got to try the entire energy sphere. 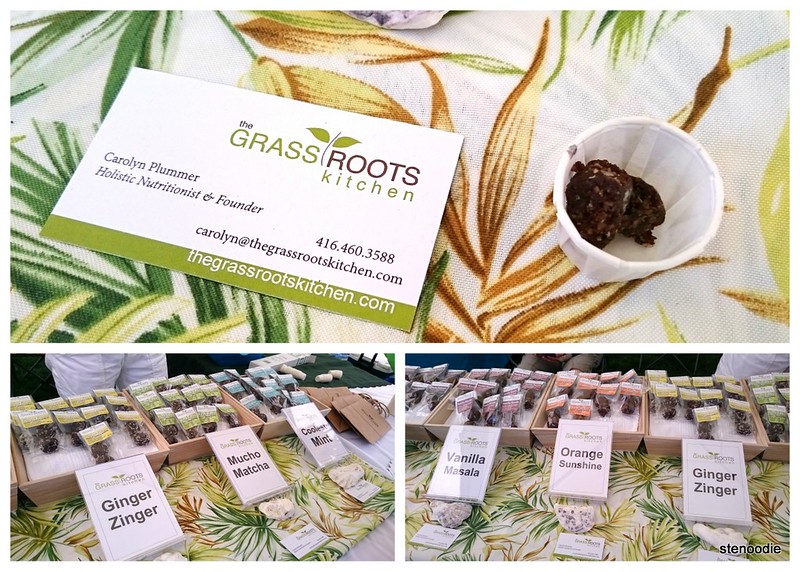 All in all, I really enjoyed the Coconut Festival.  It was my first time attending it and I was thrilled with so many food and product vendors.  I was also impressed with the variety and number of coconut-related food and products that there were.  I think they did a really fantastic job organizing the entire event!  I hope through my pictures and my blog post that more people know about this event.  Next year, I’ll see you there! 🙂

FTC Disclaimer:  Although Mark reached out and invited me to a complimentary tasting to review the food and vendors at the Coconut Festival, the opinions expressed here represent my own and not those of the organization.