Posted on September 5, 2015 by stenoodie 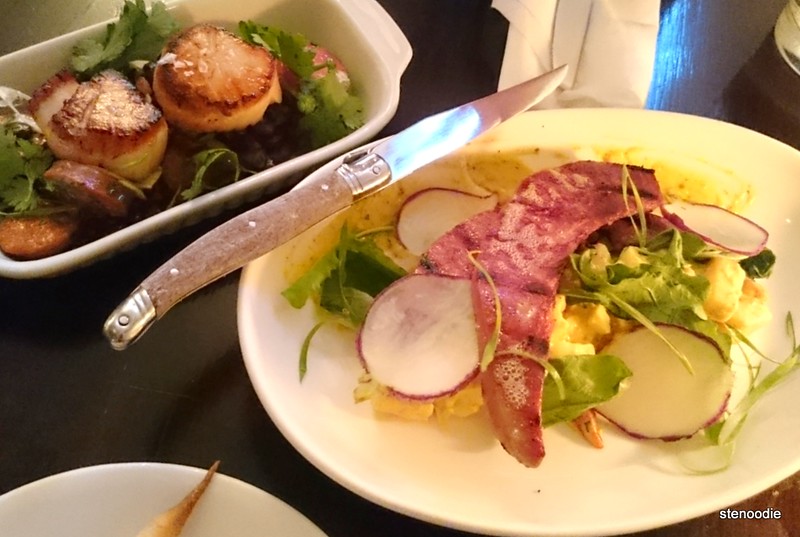 Located at 96 Tecumseth St in Toronto

Yay!  I finally got the chance to try out this restaurant!  Beast Restaurant is located at 96 Tecumseth Street in downtown Toronto near Bathurst and King.  It’s a meat-focused restaurant so don’t bring any friends here who might be vegetarian.  I was really interested in this restaurant because I had heard that they serve really great bone marrow as well as great tapas dishes in general.

Sherry and I met here on a weekday for dinner.  They have a wide open outdoor patio which is perfect for the summer nights and even when I walked in at 7 p.m., there were a lot of people enjoying their meal outside with drinks. 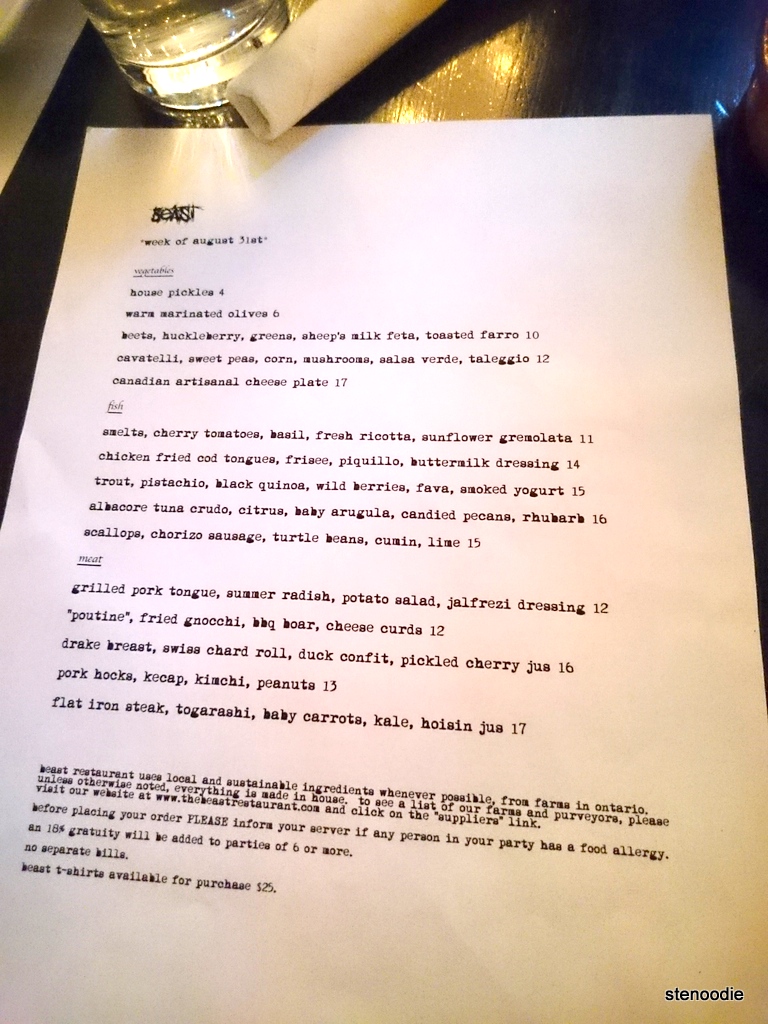 We sat inside.  It was a very modern and low-key restaurant with some interesting portraits on the walls that have to do with meat.  I was unfortunately late due to traffic so I missed the 5-7 p.m. happy hour specials.  Sorry, Sherry!  Fortunately, Sherry nabbed two happy hour special dishes before I arrived so we were able to try the tuna tartare as well as the cheesy calamari rings.  I loved the calamari rings because they were engulfed with fried cheese.  The calamari rings tasted a little harder than usual, but the cheese totally overshadowed that.  It was so tasty! 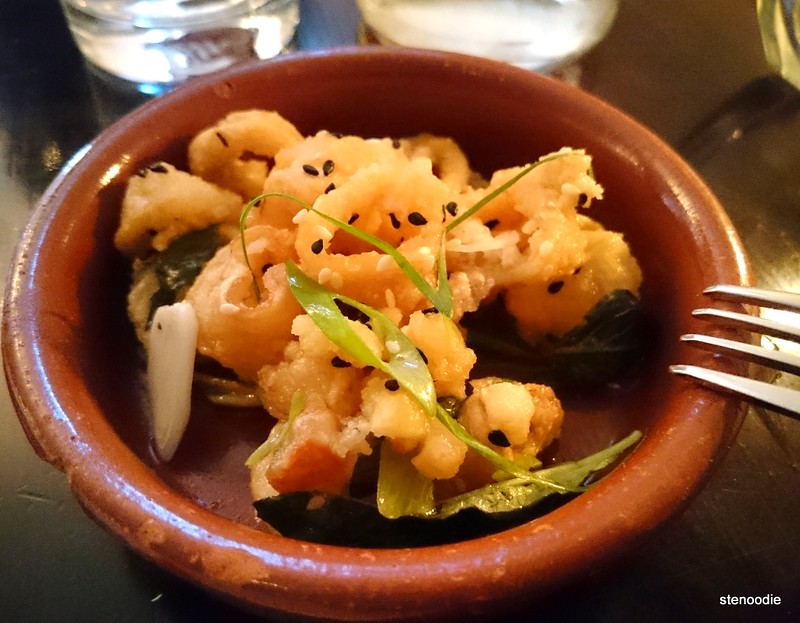 The tuna tartare was pretty good.  It sat on top of a crispy cracker.  I think if it had even more flavour, I would have loved it even more. 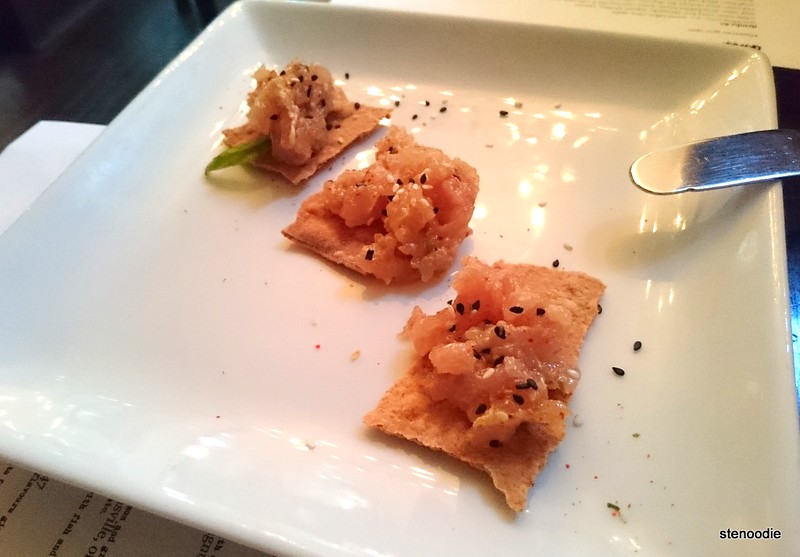 For our “mains” (there are no mains here, you share everything since they are small dishes), we chose the pork tongue, scallops, poutine, and pork hocks.  The menu at Beast seems to change every week, so unfortunately, I wasn’t able to try their infamous bone marrow this time.  (I think I’ll have to return another time to try them out again then.. if they still serve that!) 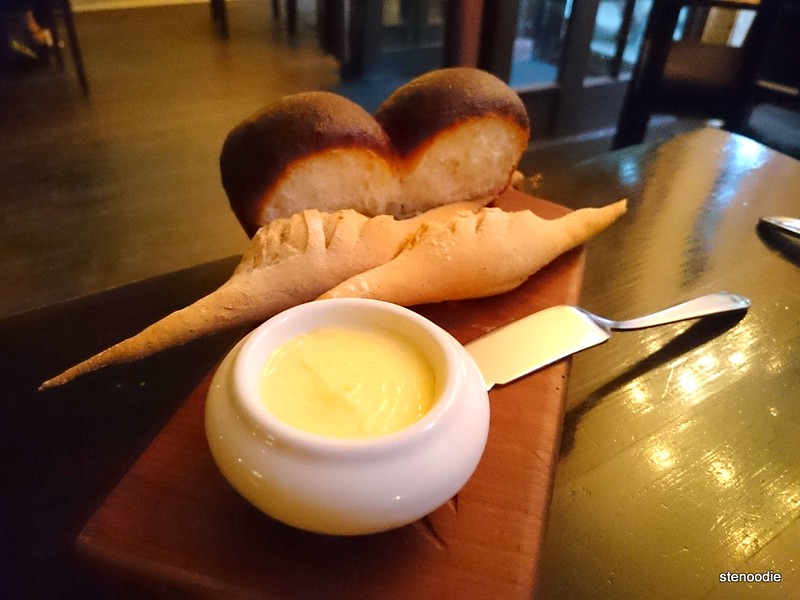 Bread with smooth butter. The long stem of bread was so unique! I really liked the bum-shaped/heart-shaped bread though. It was so soft and fluffy! 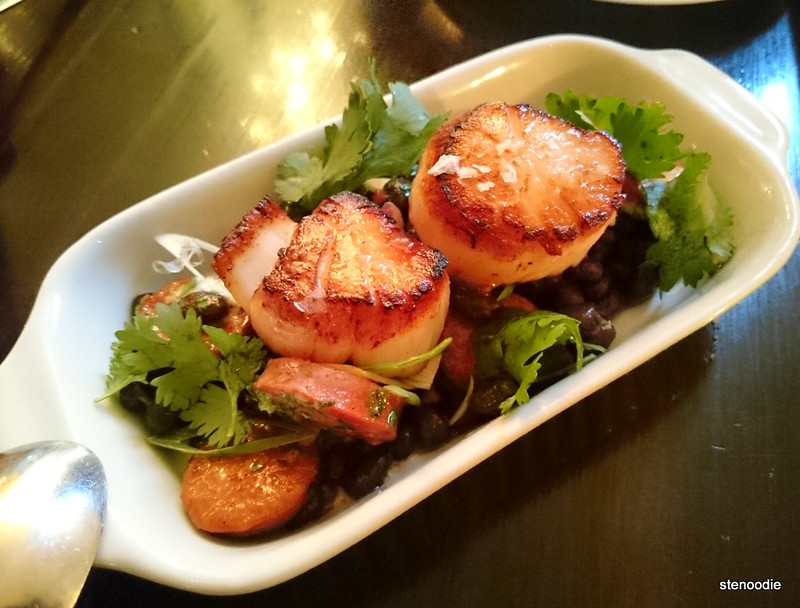 The scallops came with chorizo sausage, turtle beans, cumin, and lime.  Since it was a tapas place, the dishes are small so that you can order more to share.  This was perfect for Sherry and I to share since there were two scallops.  The two scallops were very large too!  Just look at it!  It was very well fried and soft.  I absolutely loved the chorizo sausage in this dish.  It was scattered in the dish along with the turtle beans.  The chorizo were sliced and had just enough spiciness in it to give a punch.  I’m not a big fan of beans but these turtle beans were pretty good.  It was a solid dish! 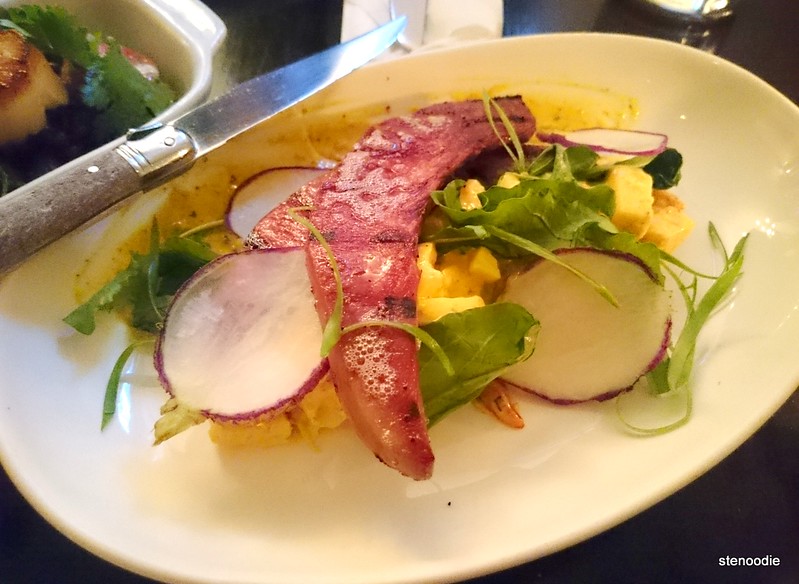 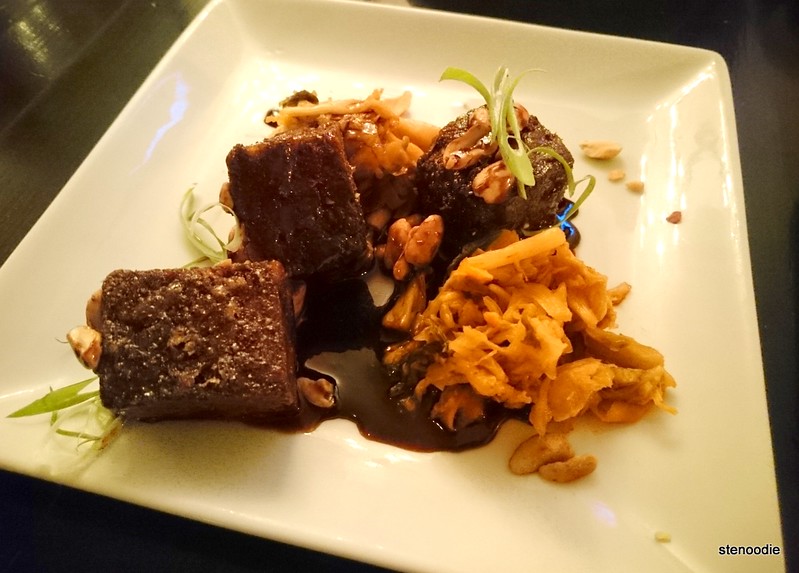 The pork hocks came in three on a plate with kecap (Indonesian sweet soy sauce), kimchi, and peanuts.  This was a very strongly flavoured dish!  The pork hocks themselves were deeply infused with kecap and the kimchi were so sour!  It really packed a punch, this one.  I couldn’t finish even my portion of it because the flavours were so strong. 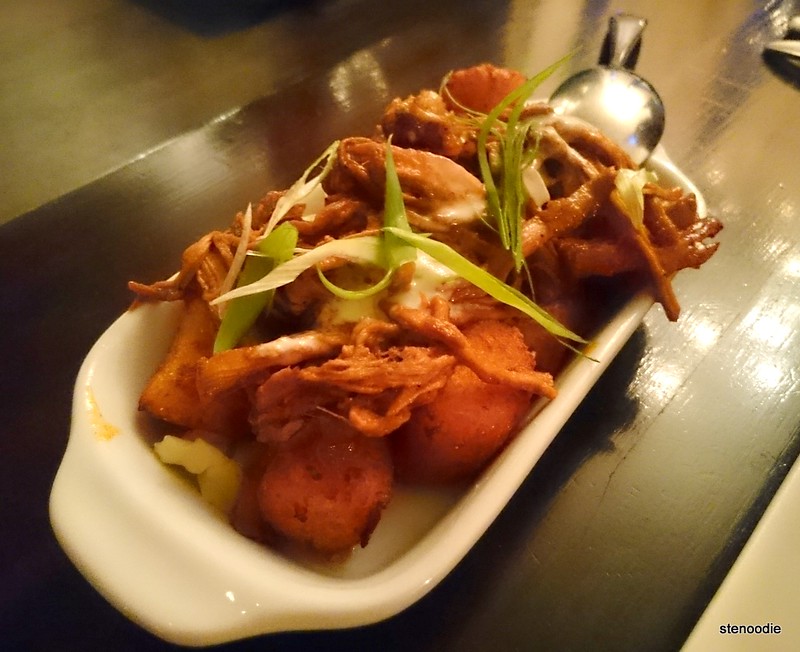 Lastly, the poutine of fried gnocchi was topped with BBQ boar and cheese curds from Quebec.  Again, this was a small portion but up to this point, Sherry and I were already quite full.  I think that the majority of what we ordered were heavy and doused in flavours that it was hard for me to eat more (I kept drinking a lot of water too).  The fried gnocchi were thick balls with potato inside and very soft.  The cheese curds were very delicious and the BBQ pulled boar was great too.  I think if the fried gnocchi were fried a little crispier, it would have been even more delicious too.

All in all, I really enjoyed my meal at Beast Restaurant.  I have heard that their brunch is delicious.  I wouldn’t mind coming again to try their brunch and maybe a few more tapas to feel out the tastes and flavours of this restaurant even more.  However, I have to admit that they are a little pricey so if you plan to come, reserve extra space in your wallet for what you’re about to eat.  This restaurant’s style and food also reminds me of what I had at Thoroughbred Food & Drink  — pricey but shareable tapas that are unique and tasty. 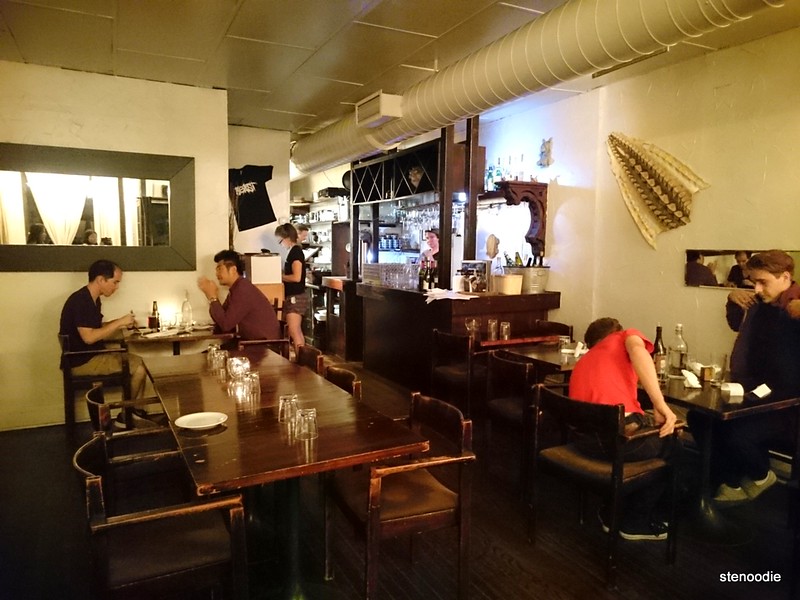 The interior of Beast Restaurant 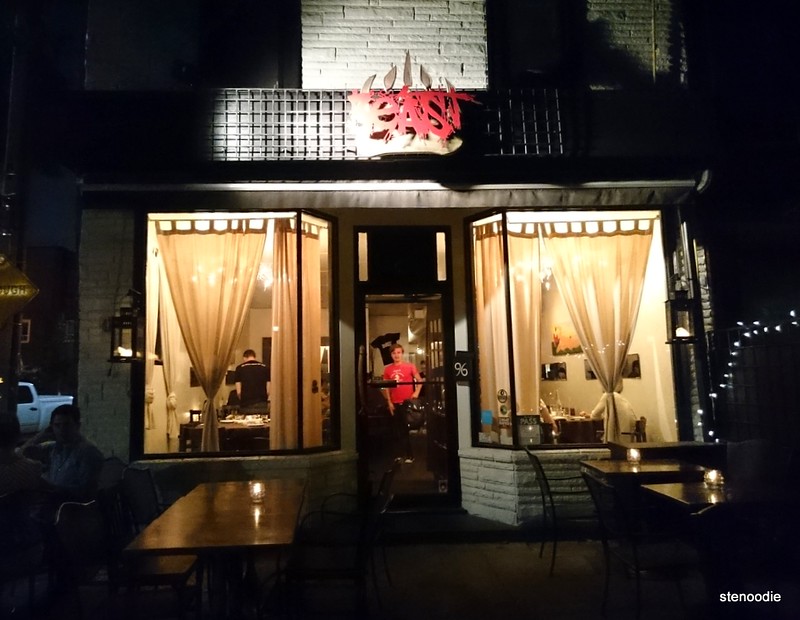 Have you been to Beast Restaurant before?  What are your thoughts? 🙂

My friends and I returned to Beast Restaurant for a quick dinner on January 29, 2016!  We came here because the original restaurant that we planned to go to Winterlicious for had too long of a wait and Beast Restaurant was the only restaurant around the King Street and Bathurst area that had availability for us. 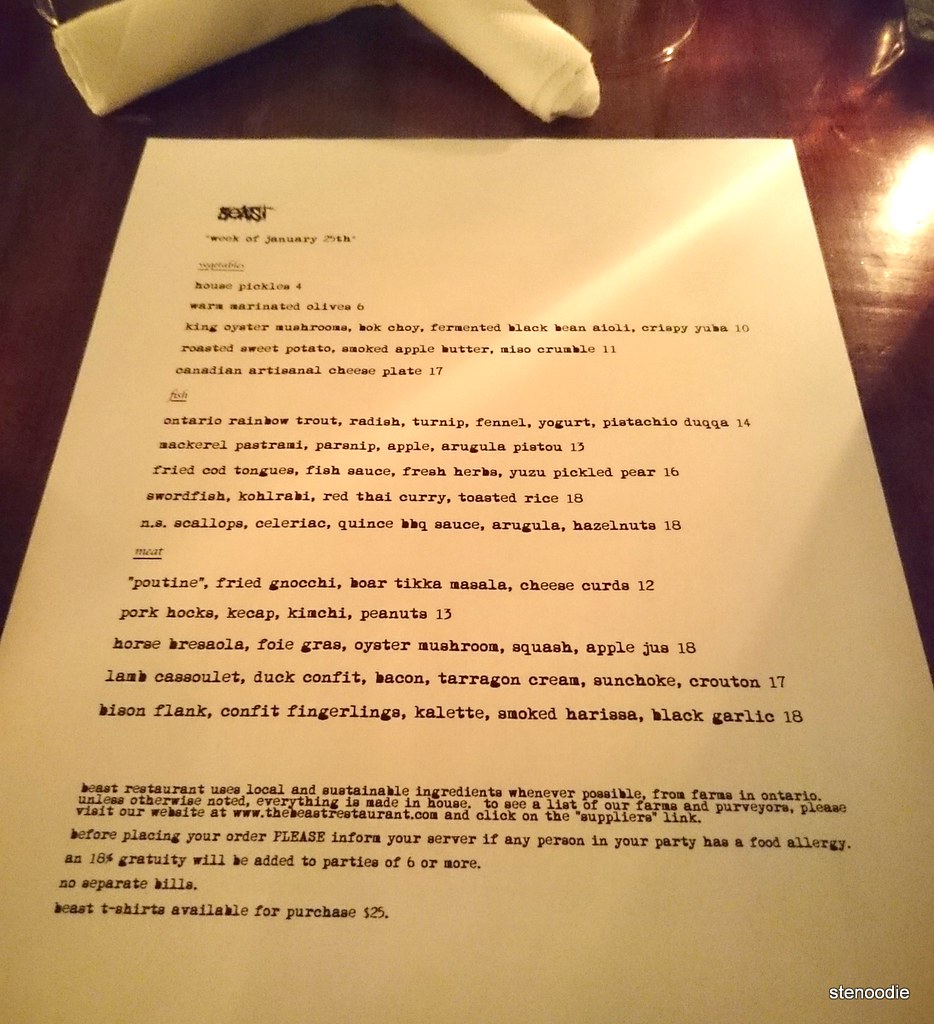 We called to ensure that we had a table and when we walked in, there was a sour look from the hostess about our arrival for some reason.  We sat down and our server Jeff asked us if it was our first time here.  For Anh and I, it was our second time here, but a first for Sarah and Raymond.  Jeff briefly explained that Beast Restaurant is a tapas restaurant where all the dishes are shared.

We took a look at the menu — they change their menus weekly.  Remember my first visit here and I wished that I could return again to try more of their tapas?  Well, it was really nice that I was here again to try them out! 🙂 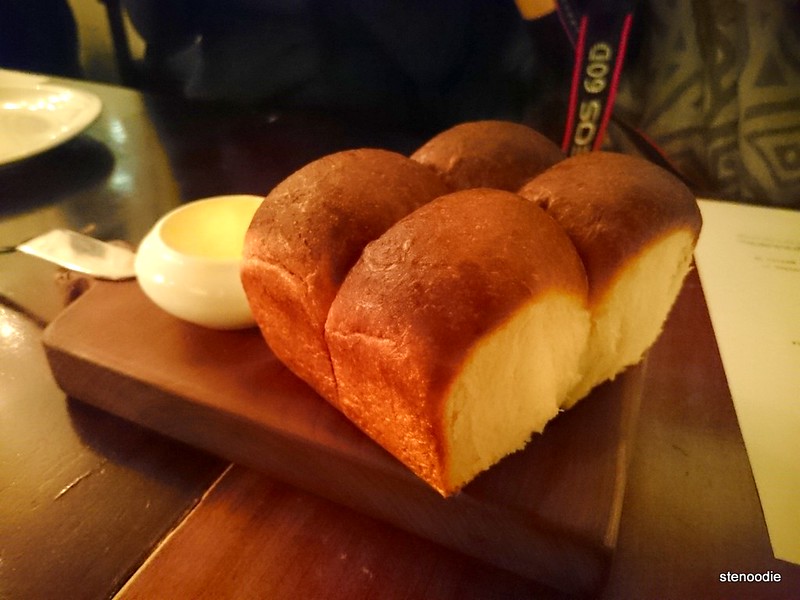 We decided on ordering just three tapas to start.  We ordered the ‘Poutine’, N.S. Scallops, and Bison Flank.

We received bread with butter to start.  I remembered this fluffy bread from my first visit.  I loved how smooth and light the butter was! 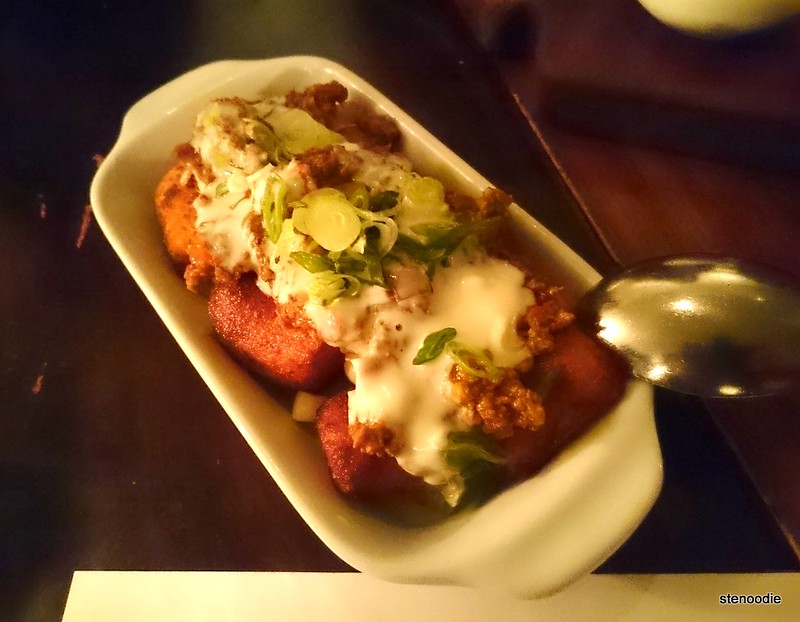 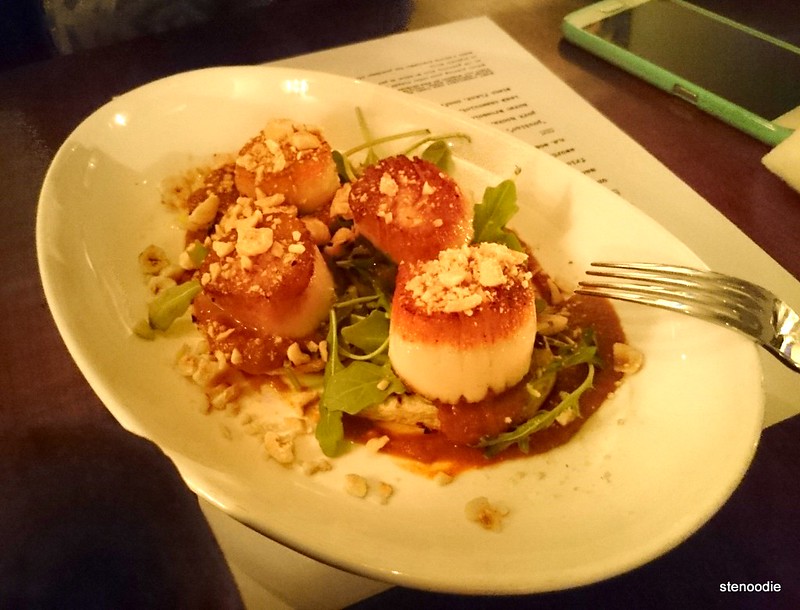 Very soon after we received the bread and butter, our first tapa arrived as well.  It was the Poutine made with fried gnocchi, boar tikka masala, and cheese curds.  While the ‘poutine’ was also made with fried gnocchi, the boar was seasoned with tikka masala this time; last time it was BBQ flavoured!  I found that I really enjoyed the small bits of boar in the dish this time around.

The second dish was the N.S. Scallops with celeriac, quince BBQ sauce, arugla, and hazelnuts.  I remembered my first experience fondly here at Beast because I loved those scallops which were so tender!  They were just as tender this time around but I didn’t like the hazelnuts that topped the scallops — I am just not that big of a fan of nuts.  I enjoyed it more the last time around when it was with chorizo sausage, turtle beans, cumin, and lime.  Still, it was interesting to be able to try their two takes on the scallops.  (Also, their usual portion contains three scallops, but since we were a party of four, we paid $3 for an extra scallop.) 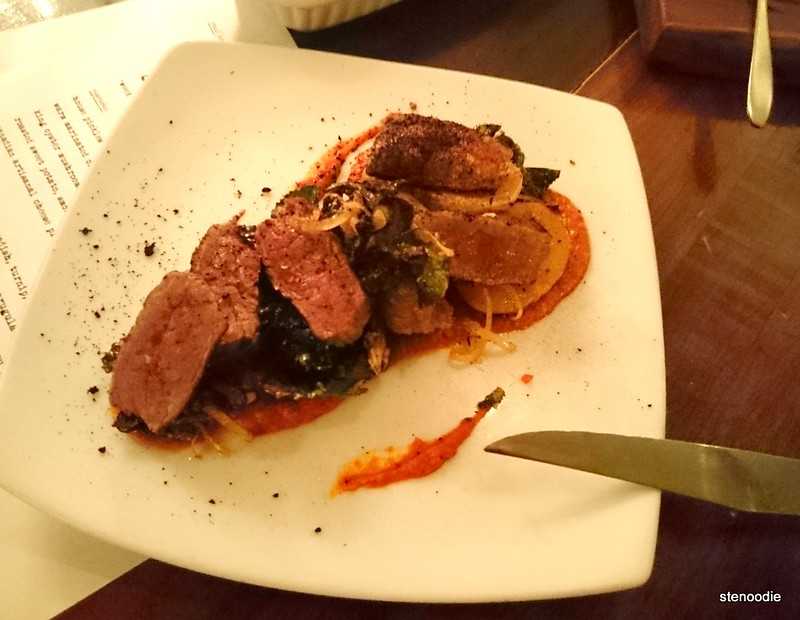 Lastly, the third dish was the Bison Flank that came with confit fingerlings, kalette, smoked harissa, and black garlic.  The bison flank was already pre-sliced.  The kalette was fresh and gave a nice texture to the dish.  The smoked harissa was an interesting seasoning with the bison; I’m not so sure that I enjoyed it that much. 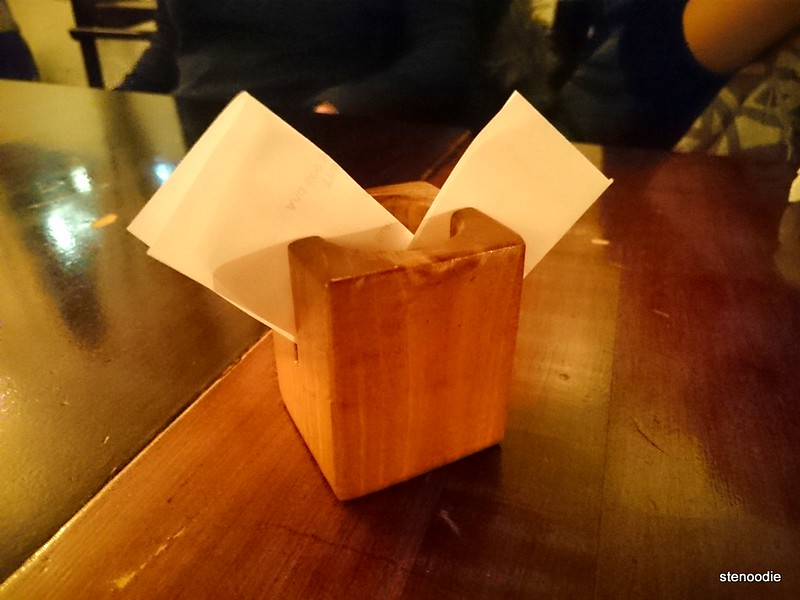 In the end, we didn’t decide on ordering any more tapas — nothing else on the menu really appealed to us (and truly, the price is a little startling if you want to fill up on these individual tapas), so we called for the bill.  I believe Jeff was taken aback that we were asking for the bill already; he probably thought we were going to order more tapas as three tapas certainly isn’t enough for a normal dinner.  We also thought that the service that night wasn’t very pleasant or nice.  It took a long time for us to pay the bill since Jeff didn’t come around with the machine.  Anyway, I’m glad that we got to try out some more tapas this time at Beast Restaurant.  However, now I wonder what their brunch is like.  Anh says their brunch is quite good! 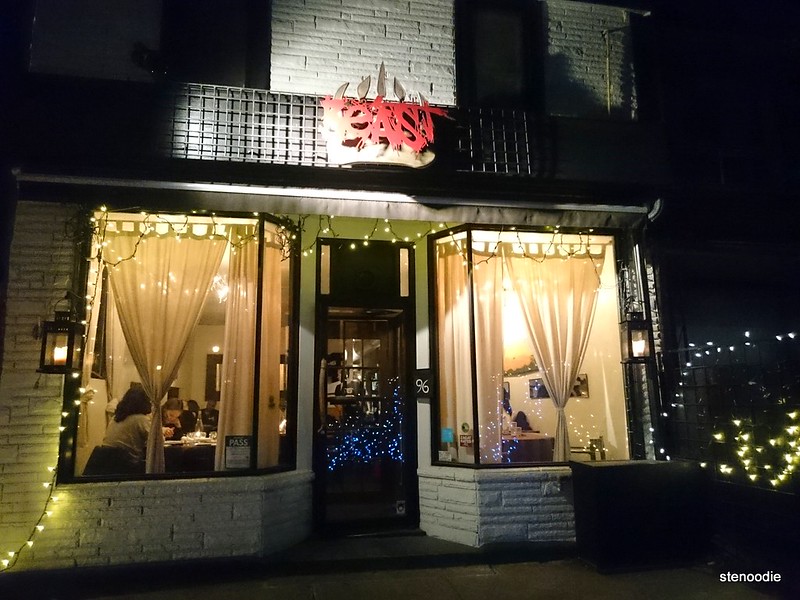 The exterior looks the same as last time