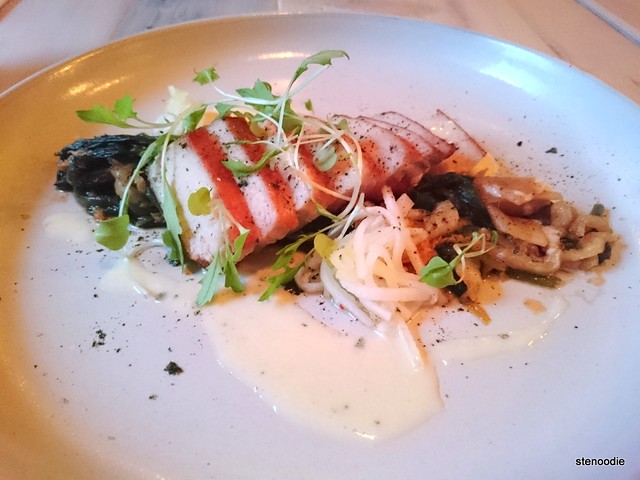 Since we weren’t able to get a dinner reservation at Copacabana (Adelaide location), I rescheduled us to still have dinner downtown at our preset dinner time.  Since Urbanspoon recently shut down on June 1, 2015 and switched over to Zomato, I had trouble locating my bookmarked lists and resorted to using the not-so-friendly-or-easy-to-use-tools on Zomato to do some restaurant searching.

I ended up choosing Thoroughbred Food & Drink, a bar and restaurant that serves Canadian contemporary food.  Thoroughbred is located on Richmond Street in downtown Toronto, directly across from the underground parking garage next to the huge Scotiabank Theatre. 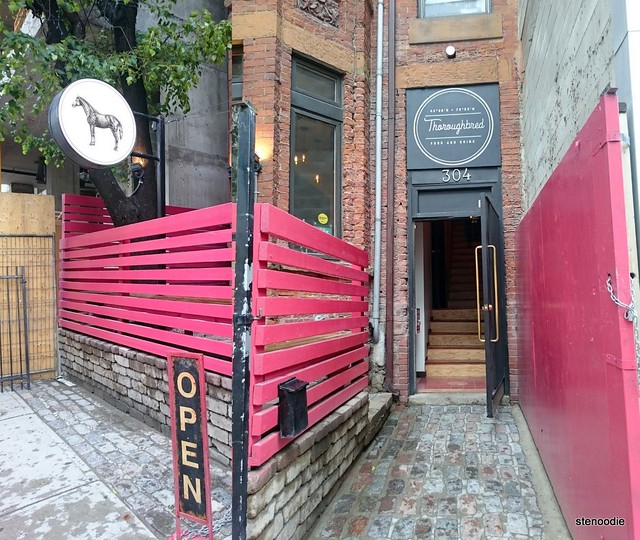 Thoroughbred contains two floors after you climb a flight of stairs (I didn’t notice any elevator service for the folks who need accessibility).  The first floor is where the bar and restrooms are.  On our visit, there was a celebration of some sorts going on and it became a little bit of a nuisance to have to “excuse me” through all the partiers to get to the restrooms at the back.

The second-floor dining room is casual and modern; it looks like someone’s contemporary styled living room!

The second floor contained two dining rooms, with the smaller one closest to the open kitchen. 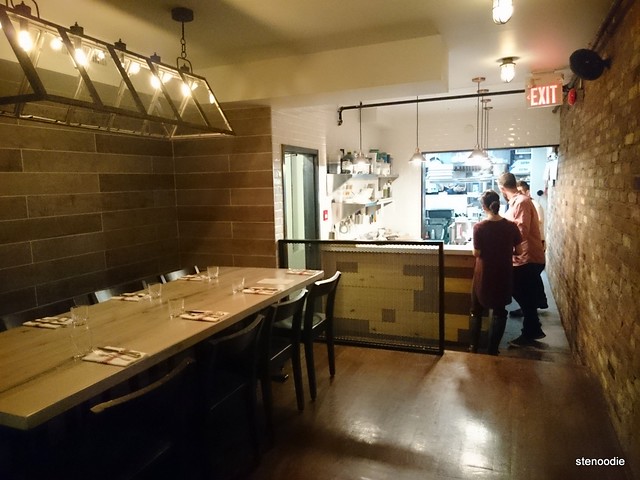 We were on time for our 6:30 pm reservation and were served by Helen.  There weren’t too many items on the list and instead of categorizing by appetizers or mains, we were informed that nearly all the items are shareable.  We were also informed about the “Let us cook for you” menu where we could get a selection of popular dishes for a set fee ($35, 45, 55) and wouldn’t have to wrack our brains on what to get.  As appealing as this menu sounded, we didn’t want to splurge on this night, so we decided on ordering separates.

Even then, it took us a long time to decide, but we finally decided on sharing three items and order one main dish for ourselves.  The Kung Pao Cauliflower was a must since we had all heard rave reviews about it.  We also chose the Chicken Liver Mousse and Brussel Sprout Caesar to share between the five of us. 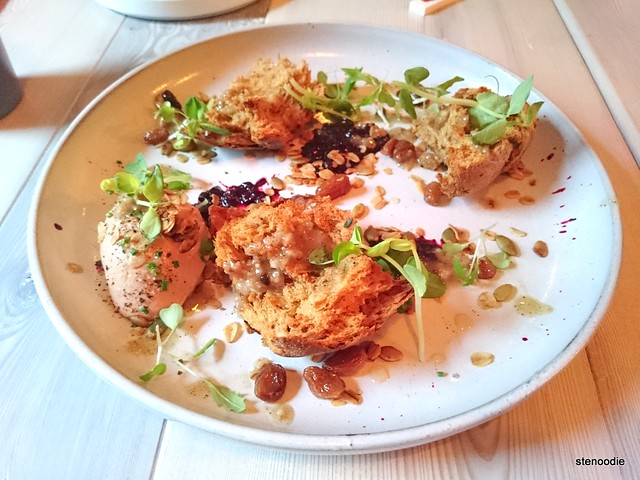 I really liked the Chicken Liver Mousse and how it was so smooth and tasty.  I thought that there wasn’t enough bread for us to dip the mousse with.  For five people to share the already-broken-up pieces of bread was difficult. 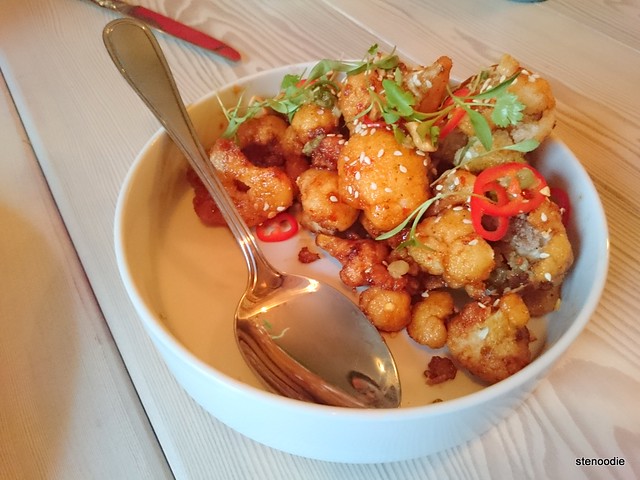 Next, the famed Kung Pao Cauliflower arrived!  I was surprised to find it all smushed to the side of the plate.  It looked like it was purposefully done but it also made the plate look half empty.  Why do they do this?  Why do they not just use a smaller plate to hold it all instead so it doesn’t look so empty?  This place sure has “contemporary flair”.

We spooned a clover or two onto our sharing plates to try and it was actually really good!  The surface tasted like Kung Pao Chicken at first except that when you kept chewing, you could tell it was cauliflower.  The way they fried it a little to make the exterior crispy like Kung Pao flavouring was definitely unique.  I can understand why so many people rave about this now! 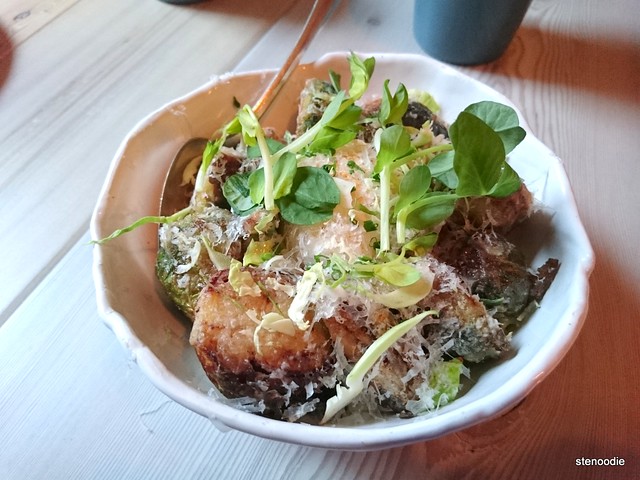 The third appetizer was the Brussel Sprout Caesar.  This was again a small dish that looked so arty.  There was a “5:15 smoked egg” in there that you smashed up before you eat the dish with miso and manchego cheese.  The brussel sprout was unique in that it tasted a little bit like a potato when you bit into it.  I didn’t find the rest of it very appealing otherwise though.  It was just a really tiny salad that had an interesting textured brussel sprout and a smoked egg.  I know Mandy really enjoyed this dish though!

It took a little more time before our dishes were cleared and we were served our mains.  By this time, the dining room was filling up and there was a lot of chatter in the room.  It got so loud that we had trouble hearing each other even though we were sitting at the same table.  It would have been nice if the service was a little faster as I felt like we waited a long time for our food to arrive. 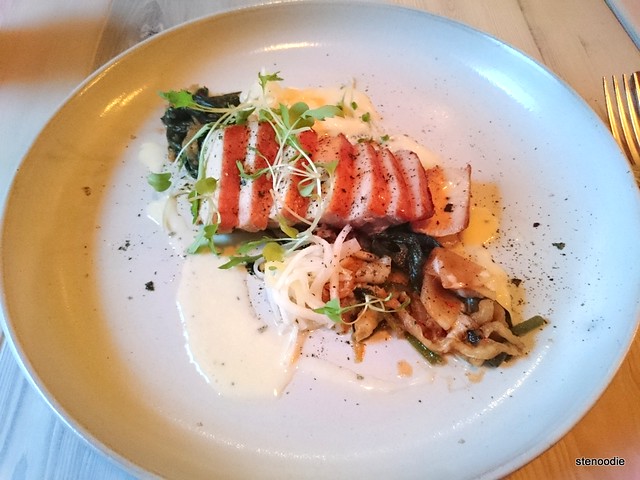 I received my Roast Pork Loin.  It contained ramp kimchi, beurre blanc, and Asian pear.  The pork loin was nicely sliced up and layered over one another in a straight line.  I was very excited to try it!  However, I was sorely disappointed when I found out that the slices of pork loin were so, so rough and hard to chew.  I’ve had a lot of pork loin before, especially since the way this was prepared is similar to the roasted pork that you get at the Chinese BBQ stalls.  The roasted pork at those are always delicious because they’re juicy and freshly cut.  I was so disappointed in this because the pork was so rough and not juicy at all.  It was actually very hard to finish this meal.  I liked the kimchi on the plate though, but that was about it.  So disappointing!

I tried a bite of the Duck Confit that Claudia (and Godwin) ordered and found that the duck was so tender!  I also liked the huge green peas on her plate that were fresh and chewy. 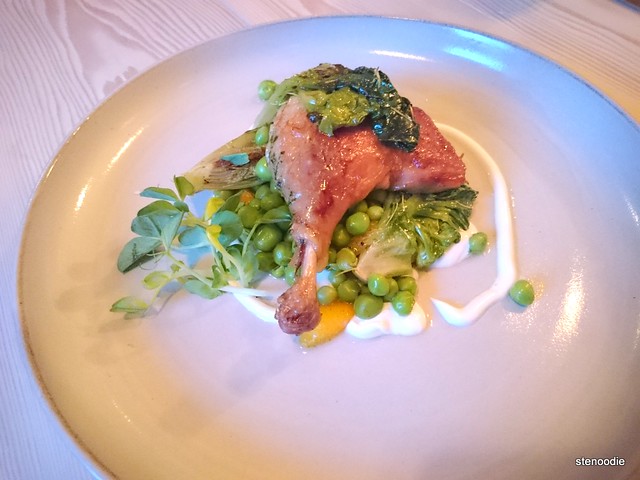 Christina took a bold move to try their Fish & Chips which wasn’t a typical fried fish and fries dish.  Instead, the server told us that the fish was boiled in a bag.  How unique!  Christina really liked this dish. 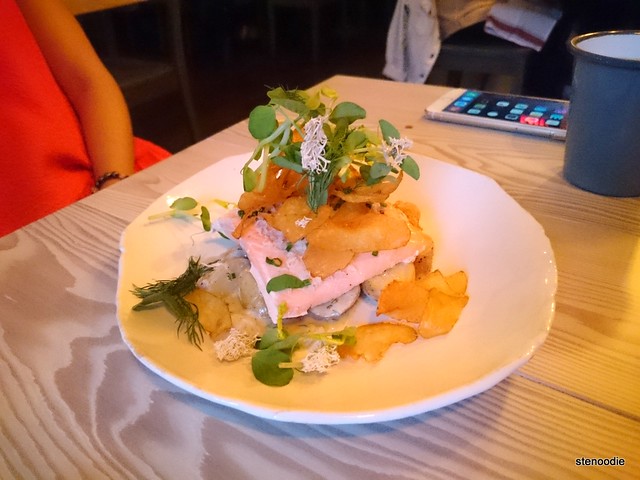 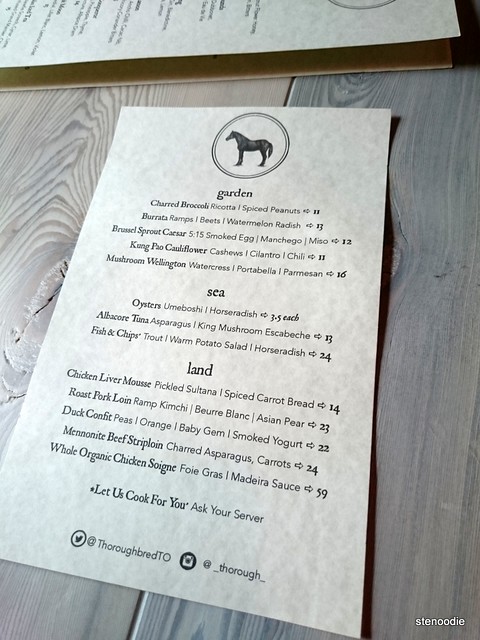 Their items were separated into “garden, land, and sea” categories

All in all, I had a great time reconnecting with some old friends again at Thoroughbred but found some of their choices lacking.  For example, the Chicken Liver Mousse and Kung Pao Cauliflower dishes were so delicious, but I found they were too artsy and lacked substance and quantity.  For $14 and $11 respectively, I would have expected larger portions.  I also found their service slow and the restaurant’s dishes too contemporary for it to be worth it.  I could have spent my money at another place and been more satisfied.