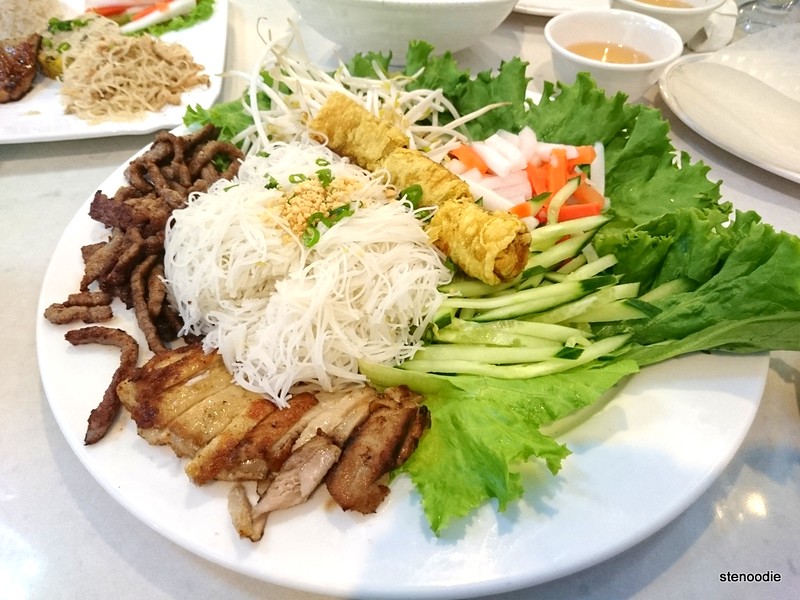 I found myself at another Vietnamese cuisine restaurant shortly after my Pho 88 dining experience recently.  Nicole and I were catching up at Pho Xe Lua Vietnamese Cuisine (formerly called Top Saigon) at the Finch & Leslie Square.

It is a simple Vietnamese restaurant and we ordered two dishes to share over lunch.  There weren’t a lot of people here at first but there was a brief lunch blitz where the place was filled with customers!  It was really nice to chat here over food. 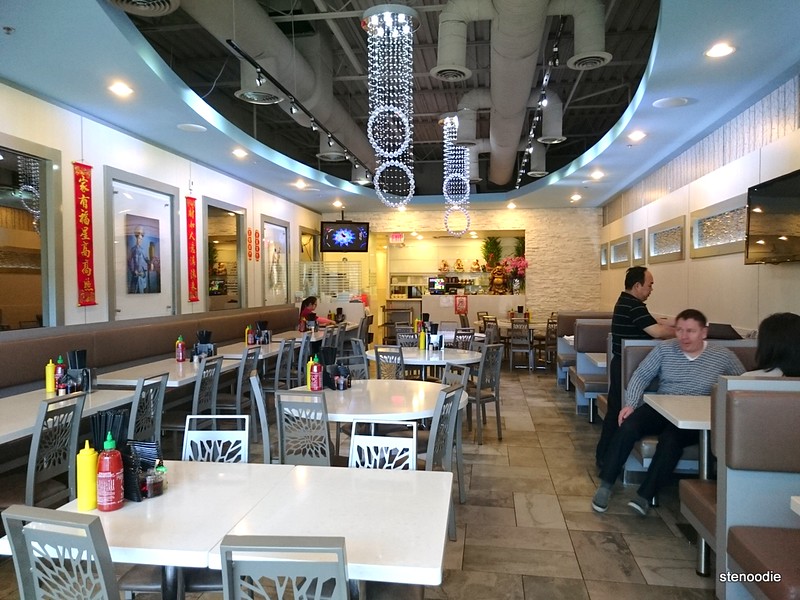 I like the touch of crystals decor on the ceiling. It makes the place look fancier than most Viet restaurants 🙂

Nicole recommended me to try the Goi Cuon here.  I’ve had it before at Pho Pad Thai and found the eating process so fun because you wrap your own banh hoi with the freshly steamed rice paper that they provide to you.  I had it like that before and when Nicole told me that we were having that, I was quite excited.  Yay, new food experiences! 😀  For this one, it came with the dry type of rice paper. 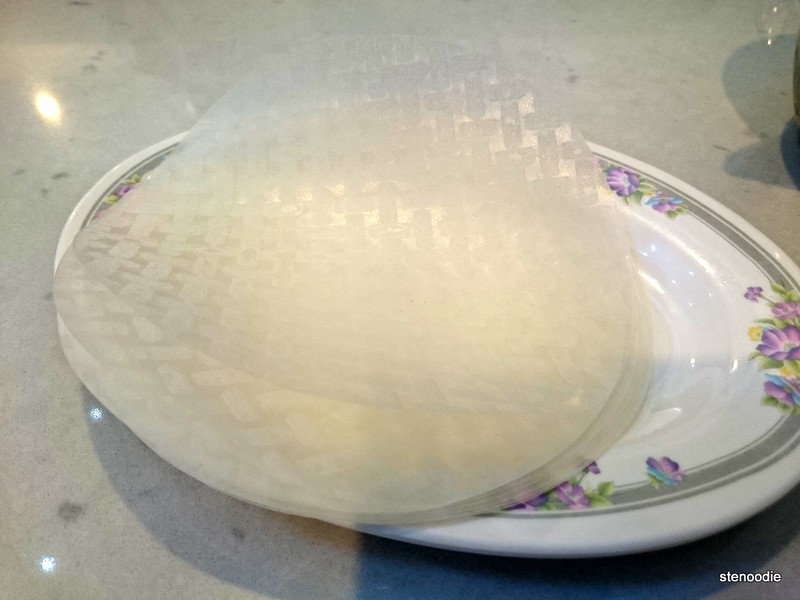 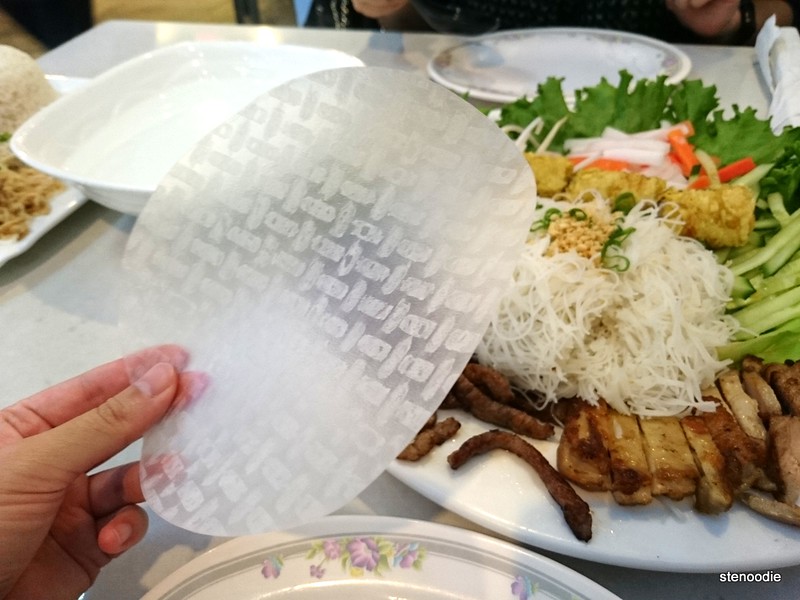 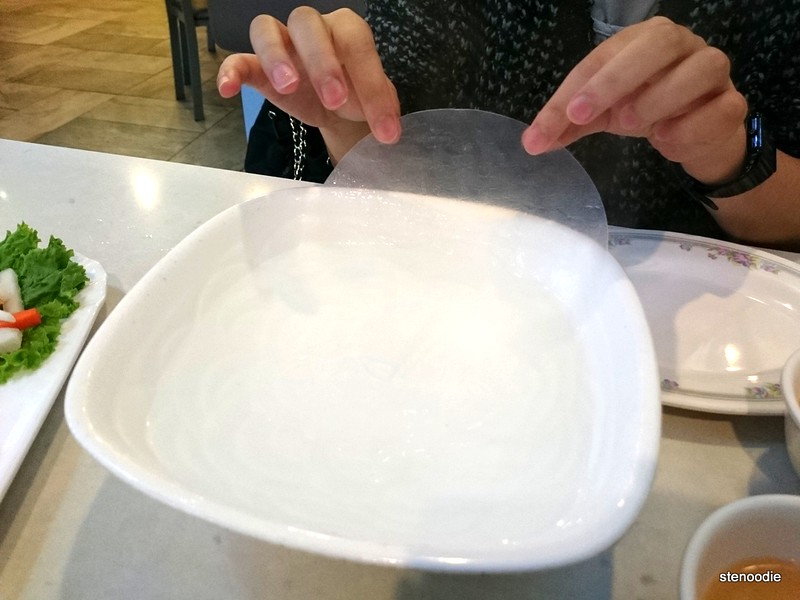 They gave us a gigantic platter of BBQ beef, BBQ chicken, and spring rolls with vermicelli and vegetables!  (Even I was bewildered when the server brought it over, and oh, so excited.)  They also gave us a big bowl of steaming hot water.  Nicole explained to me that you dip the rice paper into the hot water so that the rice paper softens up in order for you to wrap the meat and vegetables into it.  This was different from Pho Pad Thai where they give you the already-steamed rice papers on individual plastic “grids”.  So cool. 😀 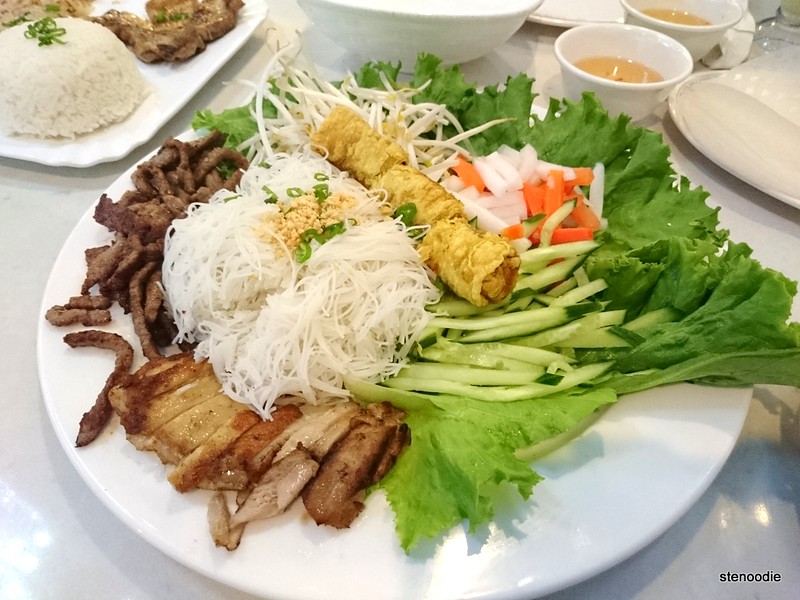 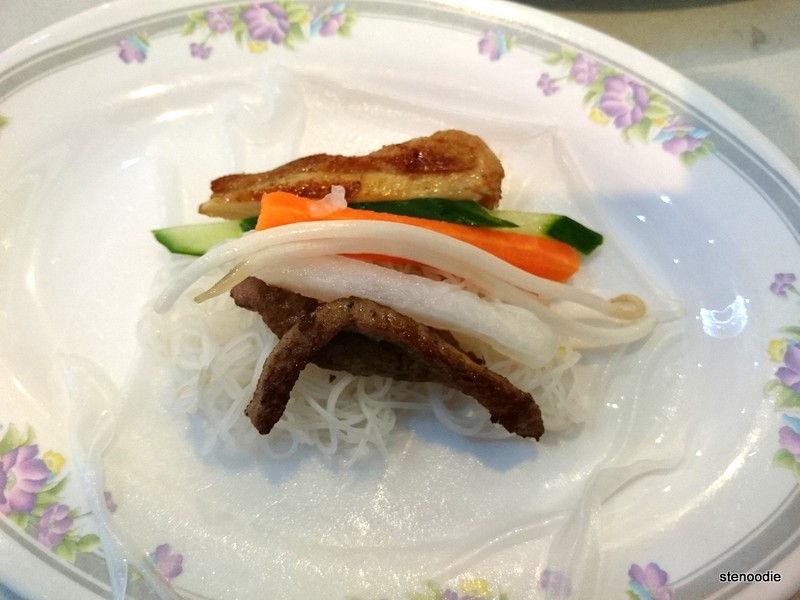 You get to custom make your own banh hoi wrap!

It wasn’t that hard to wrap the meat and vegetables into the rice paper and it “stuck” together well.  However, I found that the vermicelli, usually arriving with delicious and savory chopped scallions and/or garlic chives sauteed in oil, lacked that distinct savory taste here.  The BBQ beef and BBQ chicken were pretty good though, as well as the thin vermicelli!  I just wanted more of the savory scallions and garlic chives for more flavour. 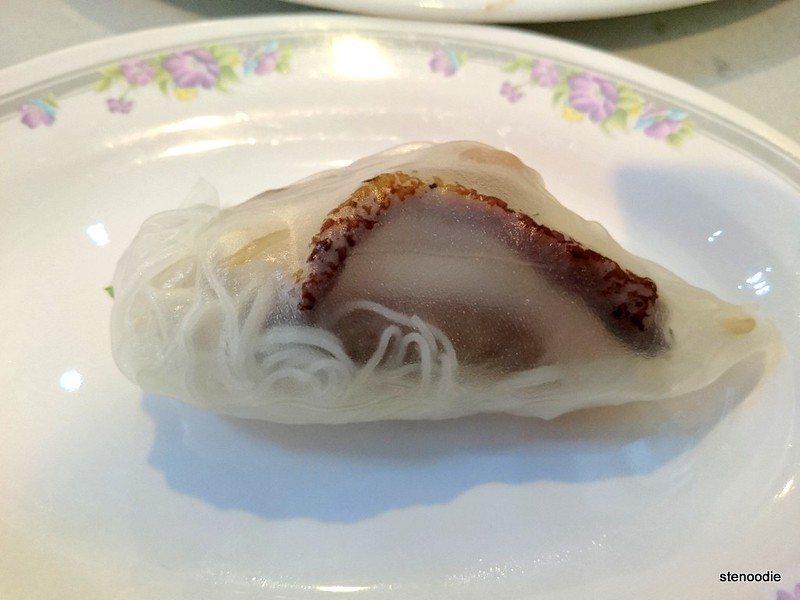 I thought that the spring roll was pretty good but that it wasn’t crunchy enough for my taste.  Nevertheless, I enjoy this type of DIY eating where you get to play/make your own food to eat. 😀

I was also craving pork chops at this time, so in addition to sharing our combination vermicelli dish, we also ordered a BBQ pork chop, steamed egg, and shredded pork skin on rice.  I was really craving that tender and seasoned Vietnamese pork chop! ^_^ 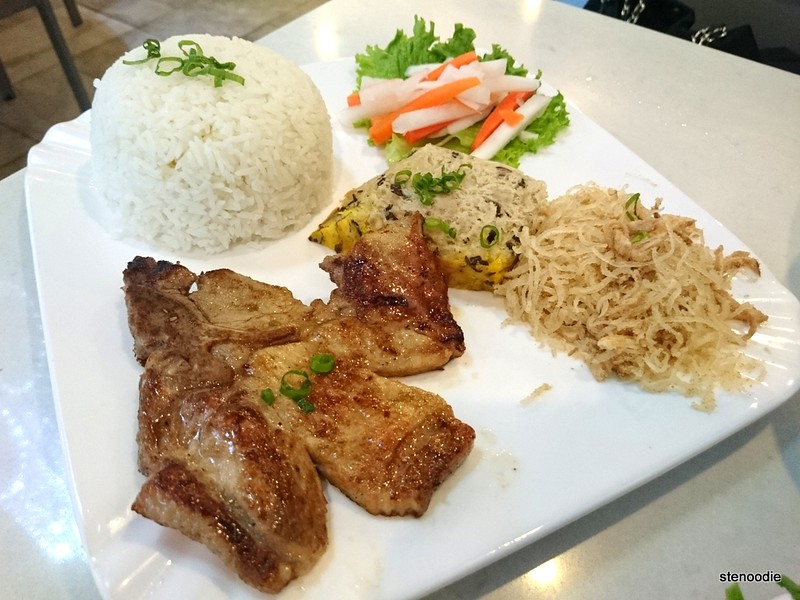 However, I was a little disappointed with the pork chop and rice dish when it arrived because the pork chop meat was quite rough to chew through and wasn’t very savory or well-seasoned enough.  Boo…  The steamed egg was a surprise though as it contained some other meats in it and was very tasty; I wanted more of this!  The shredded pork skin was also something new.  It was thin, crispy, and resembled little fried noodles except they didn’t taste like anything (they’re pork skin).  This was an okay dish.  I really expected more from the pork chop. 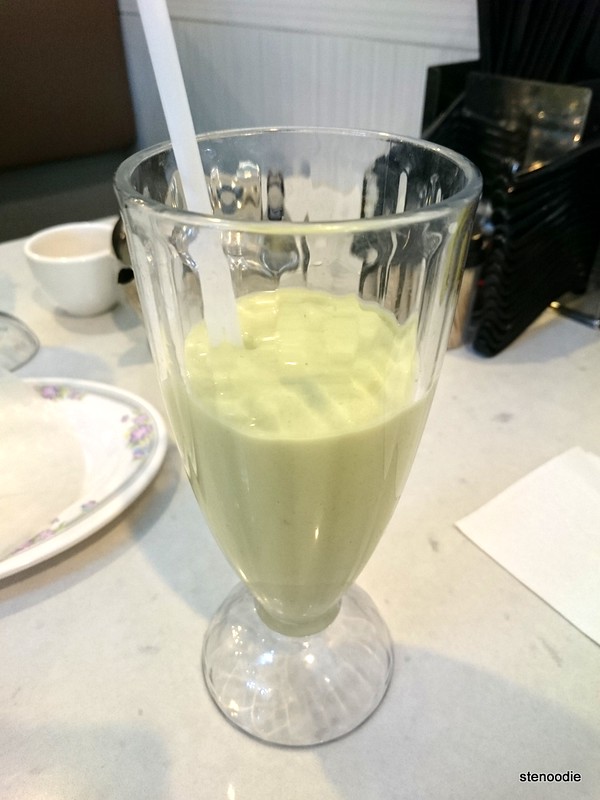 Oh, and we also shared an avocado shake.  Nicole knew that I like avocado shakes and she’s enjoyed the one from this restaurant (she frequents this restaurant quite a bit with her mom :)), so we ordered one.  I didn’t want to get one for myself so it was nice that the restaurant was able to split our one order of avocado shake into two glasses.  Yay!

I liked it!  It was creamy, tasted a little milky, but also I could taste the avocado flavour.  Yum! 🙂

All in all, this was a nice restaurant to eat lunch at.  It was very cheap too, especially the huge combination platter which was only $10.  I especially liked the service too as both the female server and the man (who looked like the owner of the restaurant) were so pleasant when serving us.  There was a very homey feel to the place. 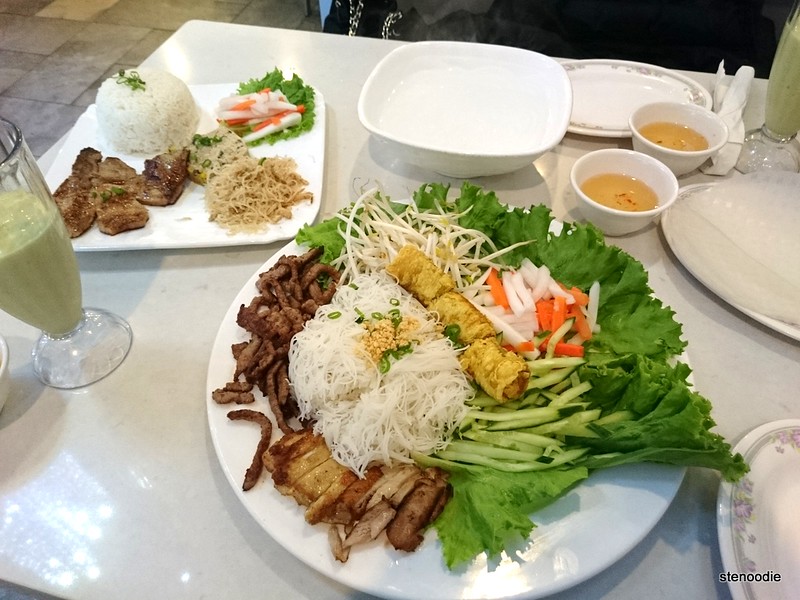 A fulfilling lunch! We didn’t finish everything so I took the rice and meat home 🙂 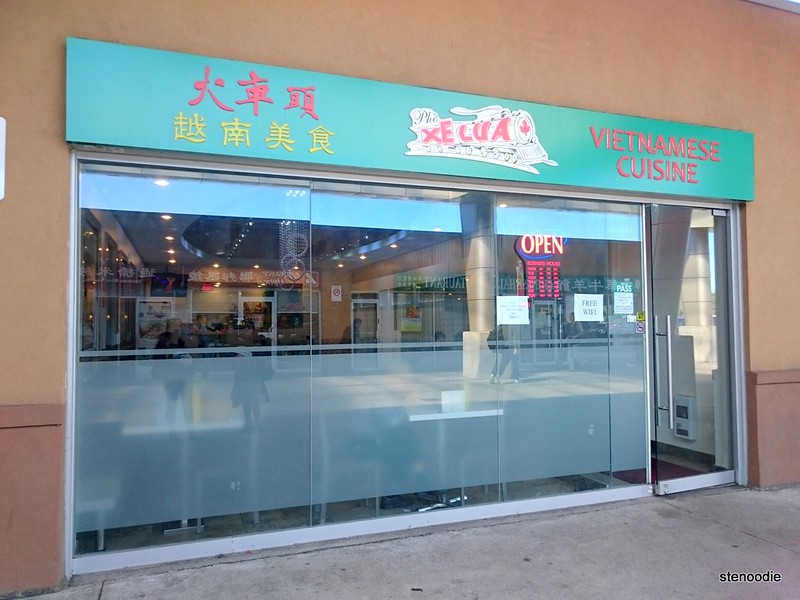 It might be a little hard to spot the restaurant at first from the outside parking lot at Finch & Leslie Square, so you’ll have to walk through the plaza a little bit, past the Sunny Supermarket and then out the doors where you see a small street of restaurants — a lot of choices here!  There are many locations of Pho Xe Lua in Toronto.  Have you been to this one before? 🙂