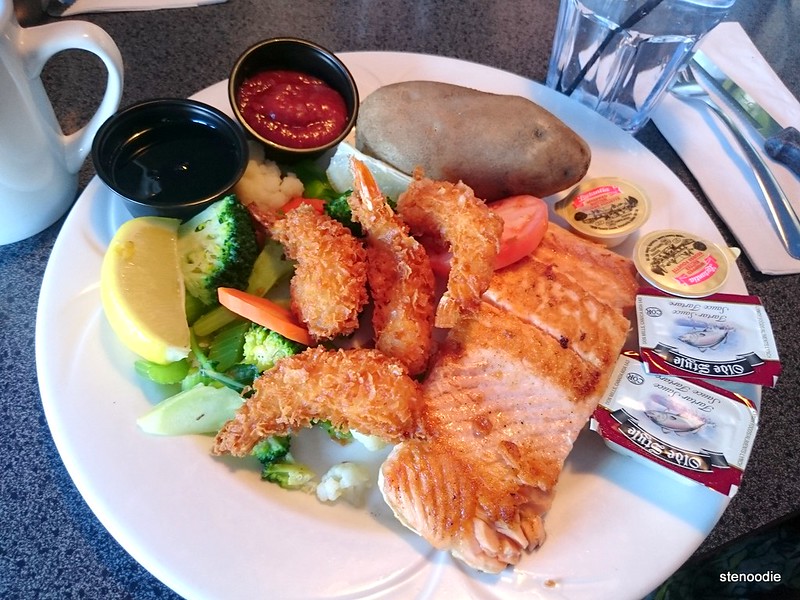 On New Year’s day, we had a road trip from Calgary to Lake Louise and Banff in Alberta!  We were blessed to have great weather on this day.  Despite being chilly outside, it was the best weather we could ask for because the skies were clear, the roads were clear of any heavy snow, and our trip was smooth and we arrived safely.  A big thank you to our friends for driving us there! ^_^ 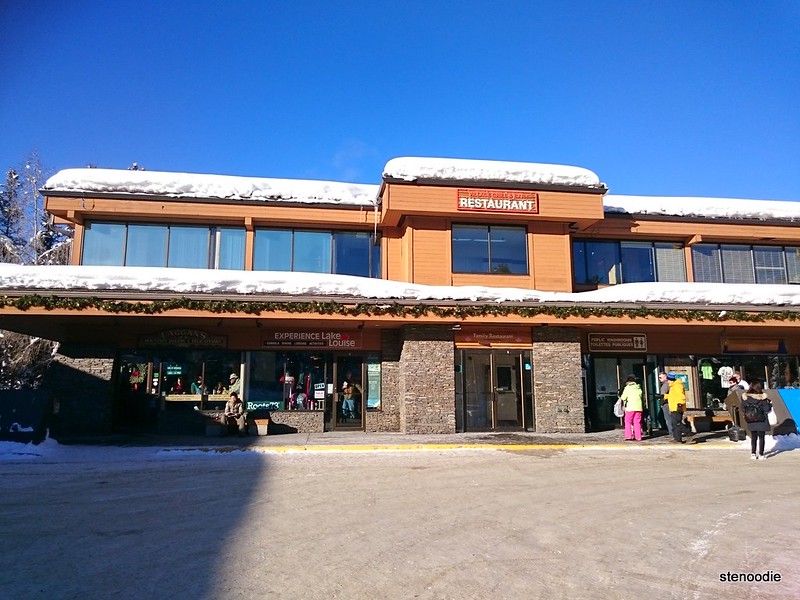 After driving into the National Parks area and passing by the beautiful Canadian Rockies and wilderness, we settled down for lunch close to 1:30 p.m.  Not much can be said about the natural beauty that was all around us, but since this post is a food post, I’ll leave the nature talk and pictures for another post.  We stopped by Samson Mall where there was a small restaurant on the second floor called Lake Louise Village Grill & Bar.  The prices seemed decent as we surveyed the menu downstairs and we headed upstairs for food. 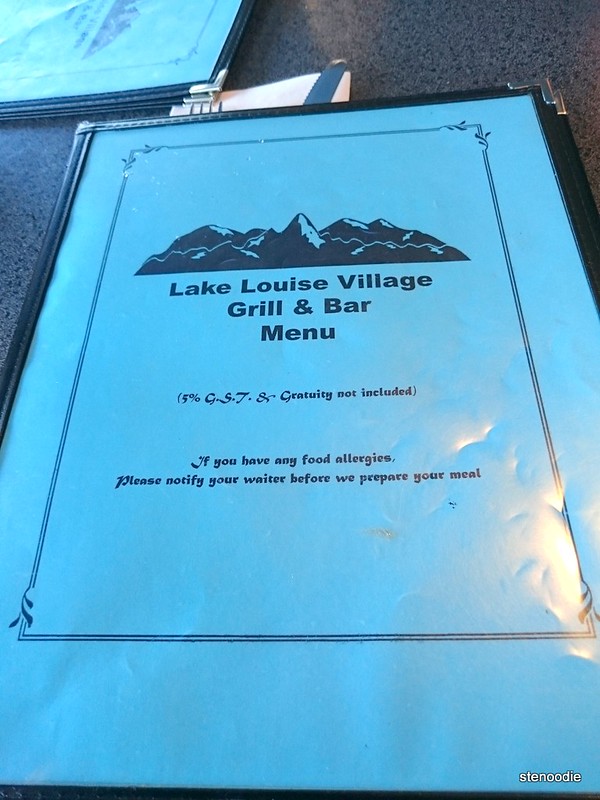 Their menu is available in Chinese too

There were a lot of people here just finishing up their food during the lunch time rush.  This restaurant actually caters a lot to tourists from all over the world.  Lake Louise Grill & Bar serves casual bar food and Western dishes but based on their menu, they also serve Asian food too.  This shows how they really cater to tourists’ tastes and the demographics of tourists that come by this area too.  They opened in 1990 and boasts fast, friendly service of fresh and hot food in a beautiful environment where you can see the Rockies through all of their windows.

There weren’t many tables for us to sit in when we arrived since the place was packed.  We were lucky to get a table at all and all 7 of us actually squished into a booth with an extra chair added on the end to accommodate everyone. 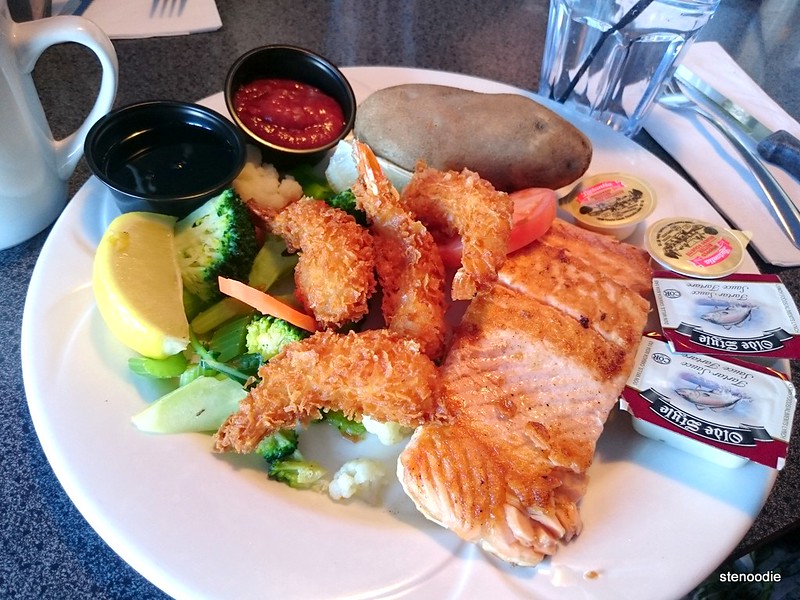 Seafood Combo. $30.95
-8 oz salmon fillet with battered jumbo prawns served with a choice of tartar or teriyaki sauce
-also served with mixed vegetables and a choice of French fries, baked potato, or rice

It didn’t take too long for the food to arrive and we were all quite hungry by this time.  The salmon fillet was pretty good as well as the tartar sauce (even though it was one of those prepackaged sauces).  The salmon fillet meat was chunky and quite substantial.  I really liked the battered jumbo prawns as it was very crispy and crunchy.  The sweet and sour sauce and teriyaki sauce that were provided was also a good match with the food.  The mixed vegetables and baked potato had a home-cooked feel to it.  It was a decent and healthy lunch.

I had a bite of the sweet and sour battered fish that Christian and Ronny shared and it was actually really delicious!  Yum! 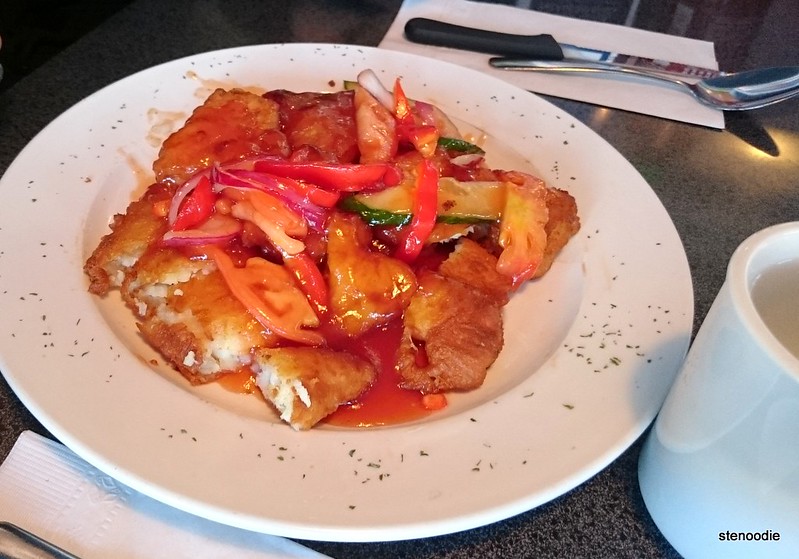 Here are the dishes that the others got: 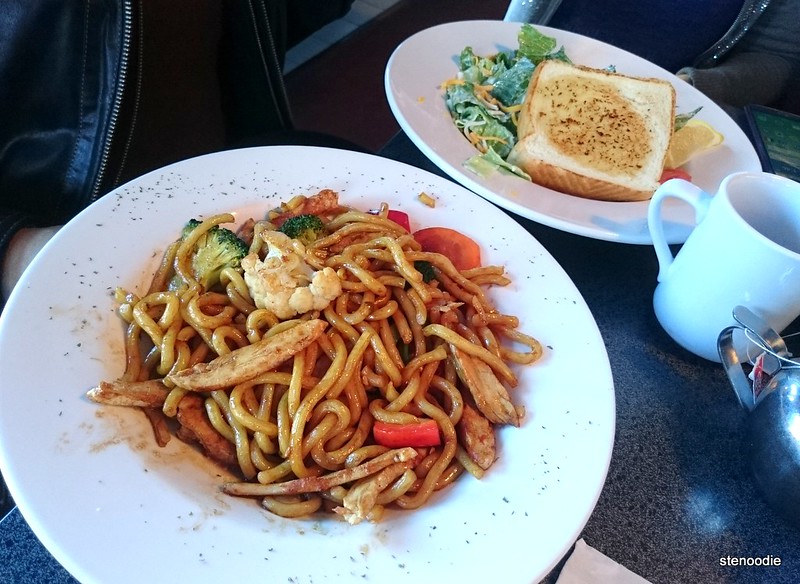 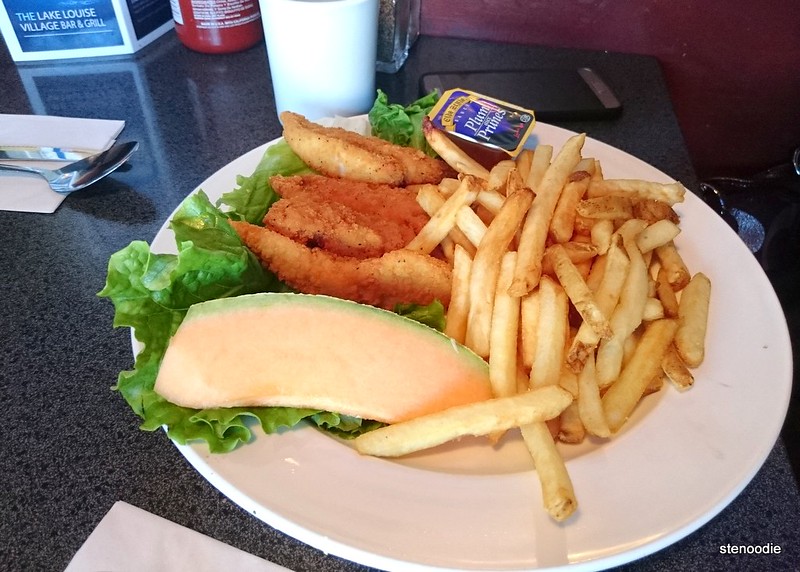 Melissa got the Fish & Chips

And with our tummies filled, we walked around the souvenir shops for a while before we continued driving onwards to Lake Louise!!  Exciting!

By the time we finished eating at 2 p.m., the place was cleared of the tourists already 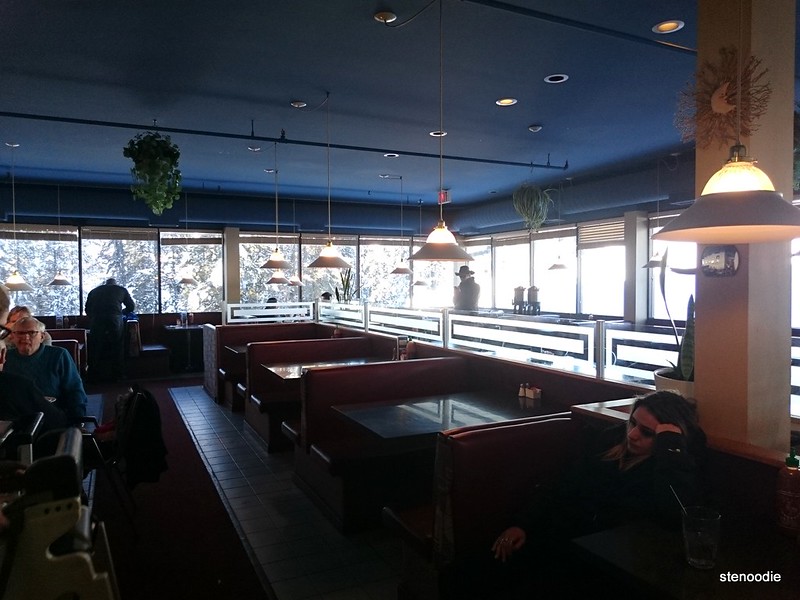 It was gorgeous to eat lunch up there because we were surrounded by the trees with snow on them — great view for summer or winter!

If you have visited Lake Louise or Banff before, did you dine here at the Lake Louise Village Grill & Bar?  What was your experience like?