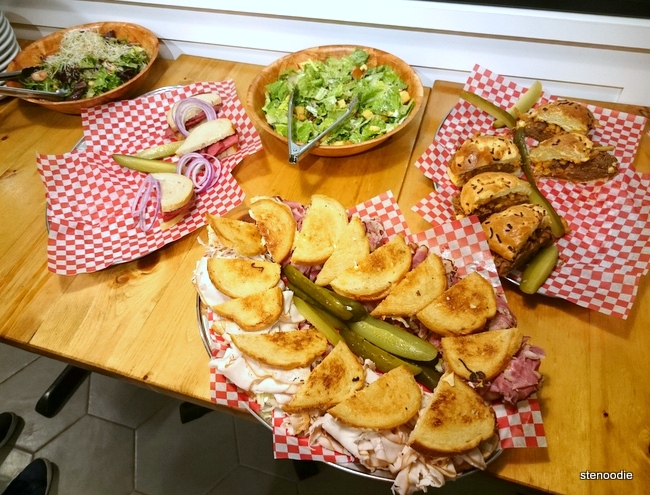 I had the pleasure and privilege to be invited to the press event opening of Caplansky’s Deli yesterday afternoon in Yorkvile, Toronto.  They are officially open today, May 6, 2016, for business.

Zane Caplansky is the man behind Caplansky’s Deli where he opened up his first restaurant on College Street in Toronto.  He had started making his own smoked meat sandwiches after being irritated that there were no great smoked meat sandwich restaurants in Toronto (after loving the ones at Schwartz’s Delicatessen in Montreal, Quebec) and wanted to bring a similarly delicious one in Toronto.  After successfully opening his restaurant in 2007, he has since expanded with two locations at the Toronto Pearson Airport and continues to expand the name of Caplansky’s Deli with this new first franchaise location at Yorkville, Toronto. 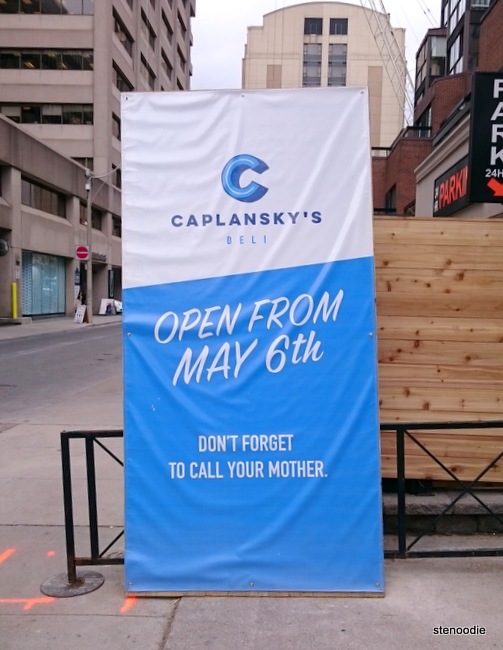 Officially opened on May 6, 2016. This is the first of many franchises to come for this smoked meat giant in Toronto 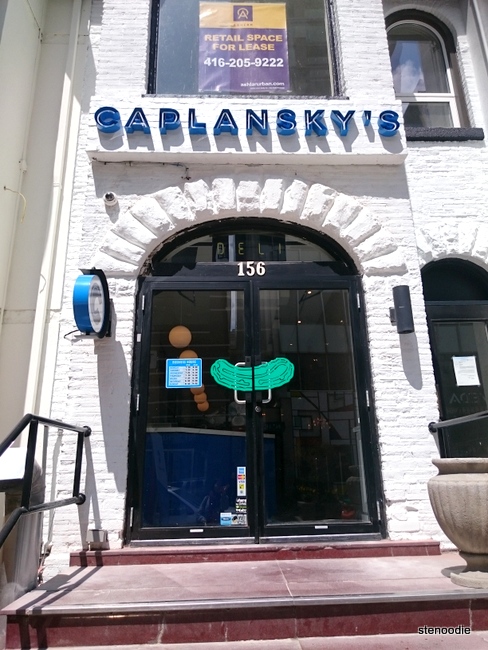 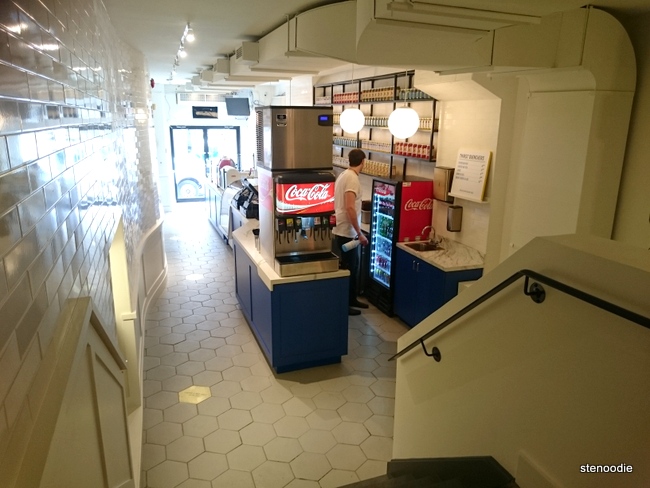 The inside of Caplansky’s Deli

The press event began at 11:30 a.m. and when I arrived, I got to meet the man himself, Zane.  This new franchise location features a fast-casual service where you order your food at the counter and can dine-in at the tables in the restaurant.  They will soon have an all-you-can-eat pickle bar and a one-of-a-kind ‘mustard fountain’ as well!  Zane really put in thought about the design of this location where there is also a pickle and mustard wall, cute sayings in brass tiles on the floor, and even a jar of”pickled socks” as a novelty item. 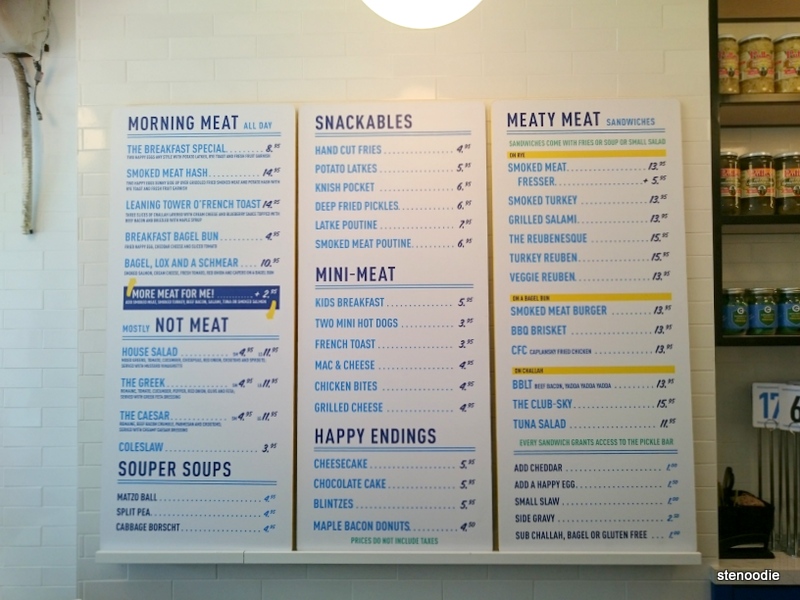 The menu at Caplansky’s Deli 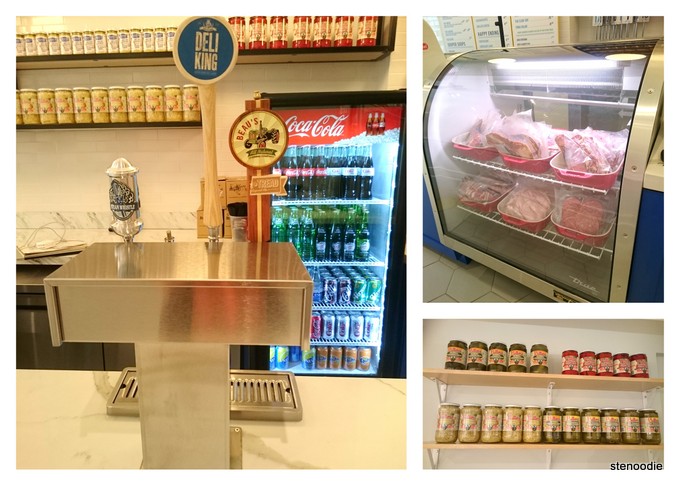 Beer on tap, smoked meat in the fridge, and jars of mustard for sale

There were a good number of fellow food bloggers and influencers from the community on this sunny afternoon.  Before we indulged in the sandwiches and to try their food out, Zane gave us a thorough history and background of his restaurant and his vision for what he wanted to achieve with this new franchise location. 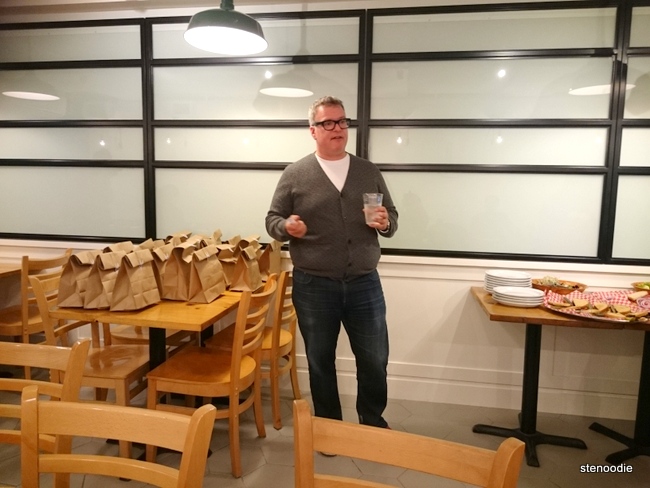 The owner of the Caplansky restaurants, Zane, speaking about the history of the restaurant and its vision

Listening to Zane speak, you could definitely feel and hear the passion of the smoked meat sandwich industry in his voice and how much he put his heart and soul into this life project of his.  It was very endearing to be able to hear his story and come to know how Caplansky’s Deli first started.  I had actually dined at Caplansky’s Deli on College Street myself about three years ago.

Zane answered any questions we had and mixed and mingled with us even afterwards to ask us how everything went.  He was very nice and the atmosphere of the restaurant was lifted with his presence and passion. 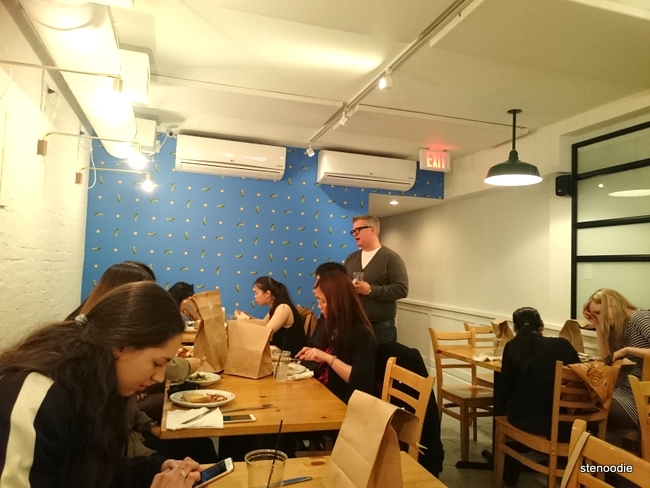 Everyone enjoying the smoked meat sandwiches and sharing on social media

Now, the food!  We were served a variety of sandwiches and eats from their menu so that we could try out their food.  Everyone was quite looking forward to the food and eager to taste the delicious sandwiches! 🙂 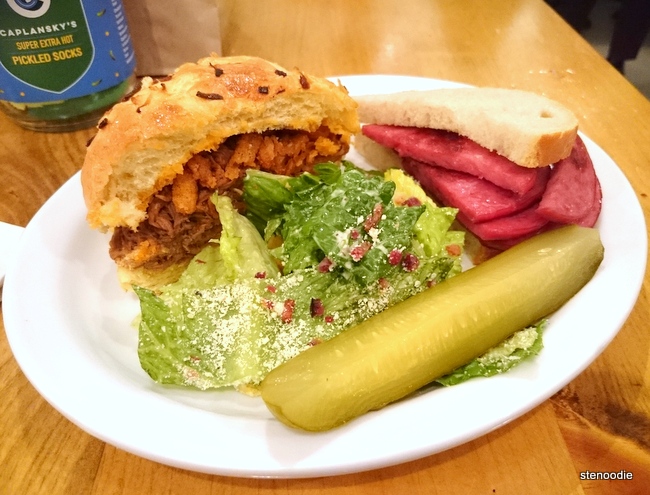 We were able to try an assortment of food such as the Reubenesque (smoked meat), BBQ Brisket, Grilled Salami, Caesar Salad, House Salad, Pickles, Potato Latkes with Apple Sauce, and their two newest creations, the Smoked Turkey and the Veggie Reuben.

It was a great spread of salads and sandwiches in addition to their amazing assortment of house-made mustards!  Again, the passion of Zane for his restaurant and customer service was demonstrated through the labels on the mustard bottles.  Each type of mustard features Zane posing on the label in order to show you the spice level and type of mustward.  His attention to detail showed how much effort and heart he puts into the restaurant. 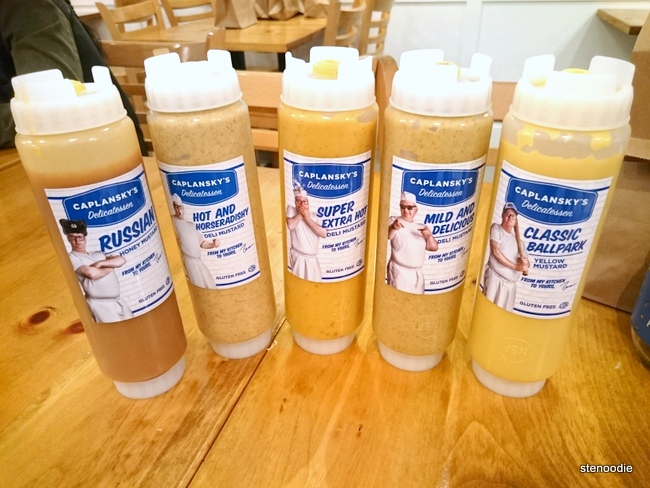 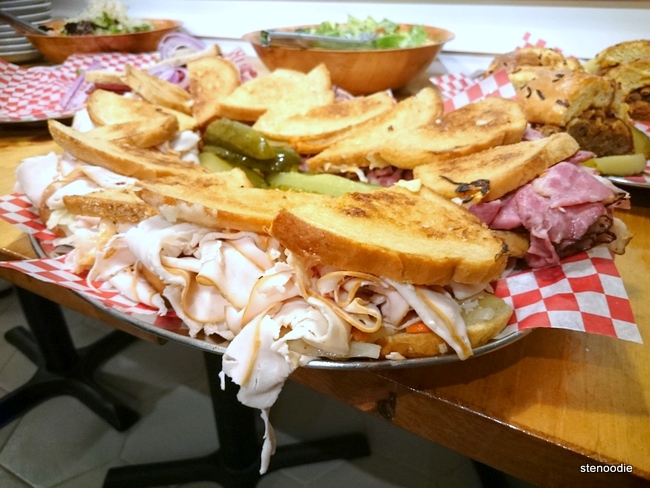 I really enjoyed the Reubenesque smoked meat sandwich.  I have been to Schwartz’s in Montreal before so I have experienced the quality and texture of the smoked meat that Zane tried to emulate for his own restaurants and I was indeed impressed!  The slices of smoked meat were so thin and tender and blended with his own spice rub that tasted delicious!  One bite into this sandwich and you for sure will not have to trek all the way to Montreal to taste a similarly amazing smoked meat sandwich.  😉 The Swiss cheese, Russian dressing, and slaw combined with the smoked meat on a buttered rye made for a perfect sandwich!  I loved it. 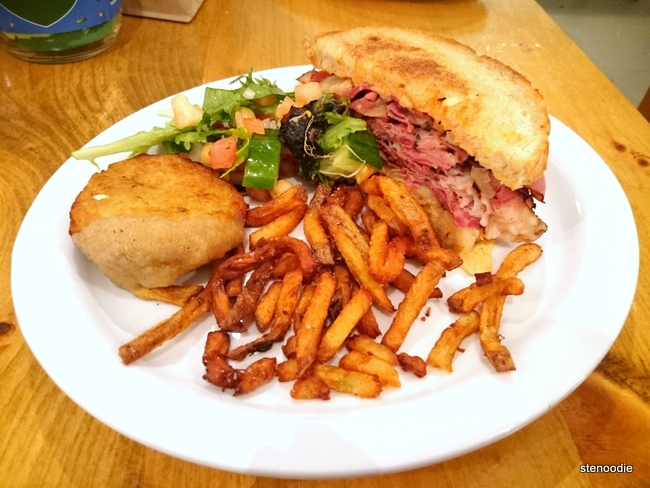 The second serving of delicious food I enjoyed 😀 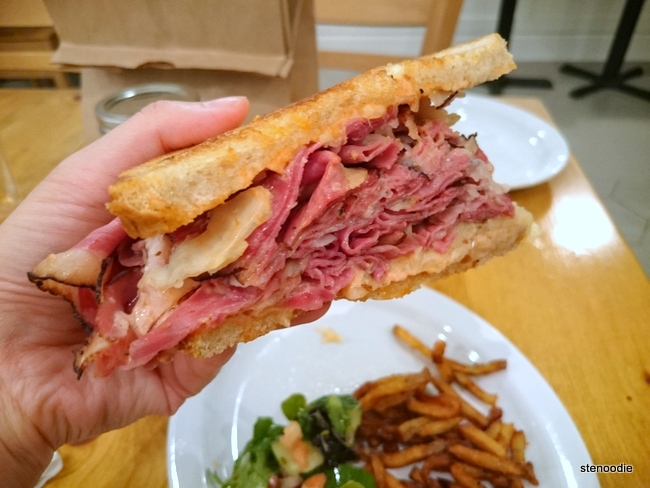 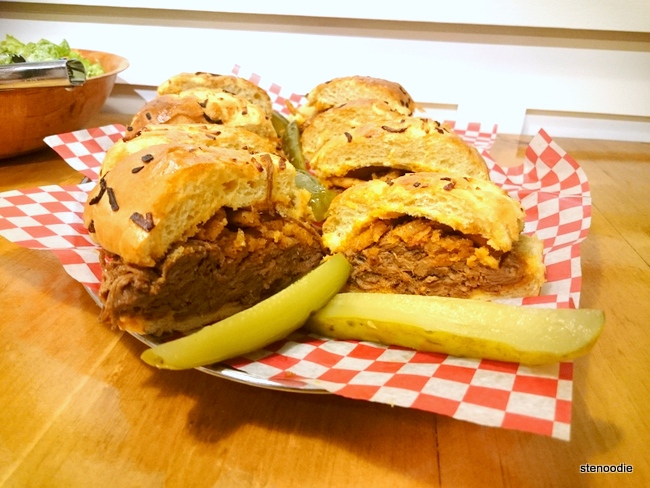 The BBQ Brisket was a pulled beef sandwich dressed with their own zingy BBQ sauce and served with crispy onions on a Silverstein’s onion bun.  It was very meaty and it was a great combination with the onion bun.  However, at some parts it was a little dry so perhaps a little more zingy BBQ sauce would have made the sandwich even more perfect.  Pulled brisket in a sandwich is such a delicious combination! 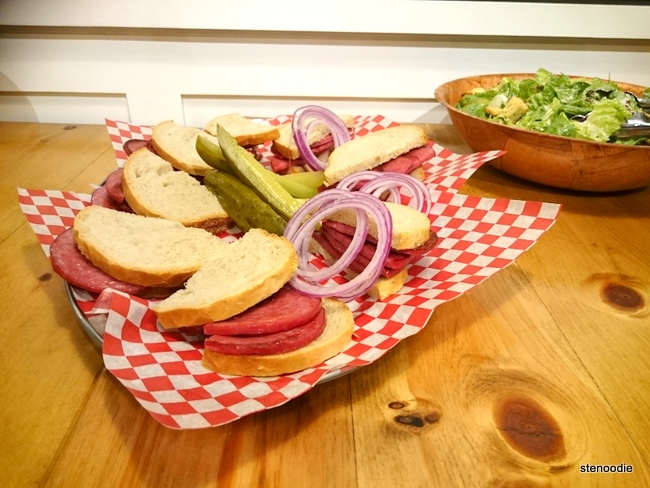 Grilled Salami sandwiches with the Caesar Salad in the back

The Grilled Salami sandwich was something that I hadn’t tasted before.  There were numerous slices of grilled salami in between two slices of bread that made it a simple-to-love sandwich.  Zane also told us the story of how grilled salami made his grandmother feel great on any bad day and was like a comfort food in his home.  I actually really enjoyed eating the grilled salami slices by themselves too.

Veggie Reuben sandwich. This was so good! 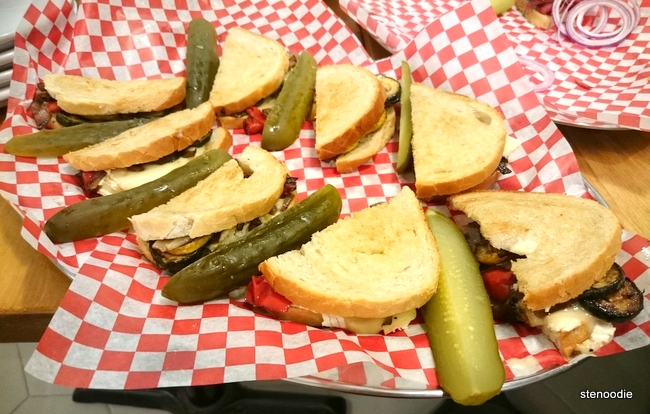 The Veggie Reuben was not what I expected for a vegetarian sandwich.  Inside the sandwich, there were lots of grilled veggies like eggplants, zucchini, onions, and peppers.  The vegetables were grilled and covered with olive oil it seemed and made for such a great sandwich!  I was really impressed with the flavour of this sandwich.

I didn’t get a chance to try the Smoked Turkey sandwich but it definitely looked great!

If you like sour pickles, you will love the ones here at Caplansky’s!  Their pickles are definitely sour and very juicy!  It made for a great intermission between bites of the meaty sandwiches! 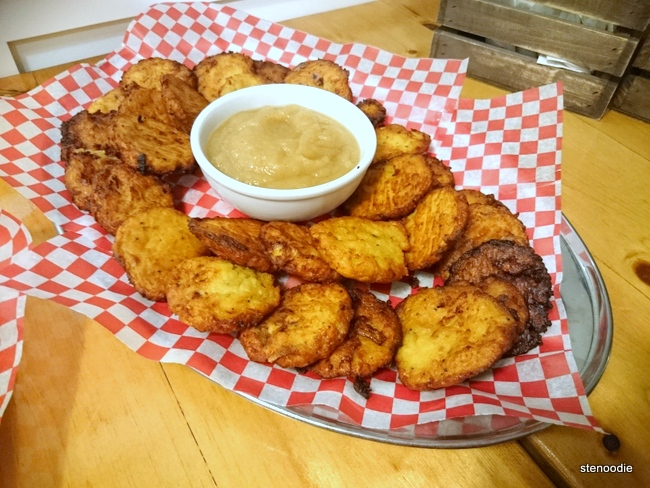 Potato Latkes with the most amazing tasting applesauce

The Potato Latkes were served with homemade applesauce.  The potato latkes were crispy and tasted so great with the applesauce.  If there’s anything like homemade dessert that I can down an entire tub of, it would be this applesauce.  It was so apple-y and thick and not too sweet that I could have scooped it up with a spoon to eat any day.  Fortunately, Zane also told us that they do sell their applesauce in tubs upon request. 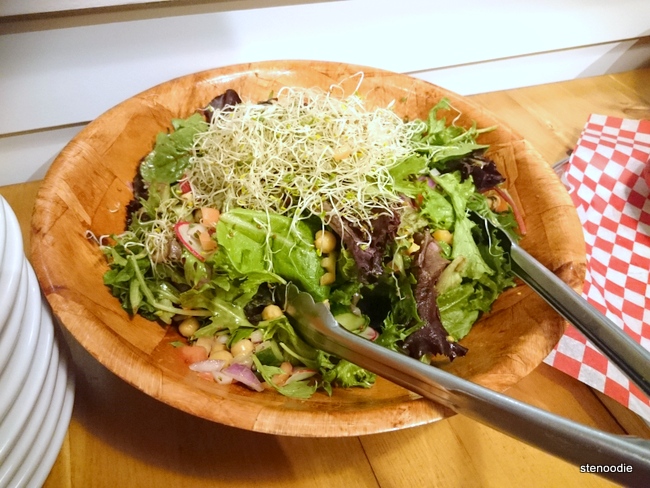 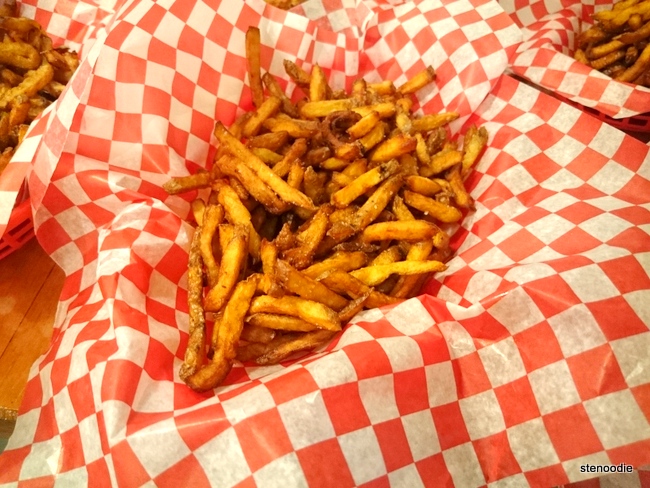 Hand cut fries. These were so short and tiny! They were pretty good though

The Caesar Salad and House Salads were a good choice when eating the meaty sandwiches.  In addition, we were offered drinks from their drink fountain and coffee or tea. 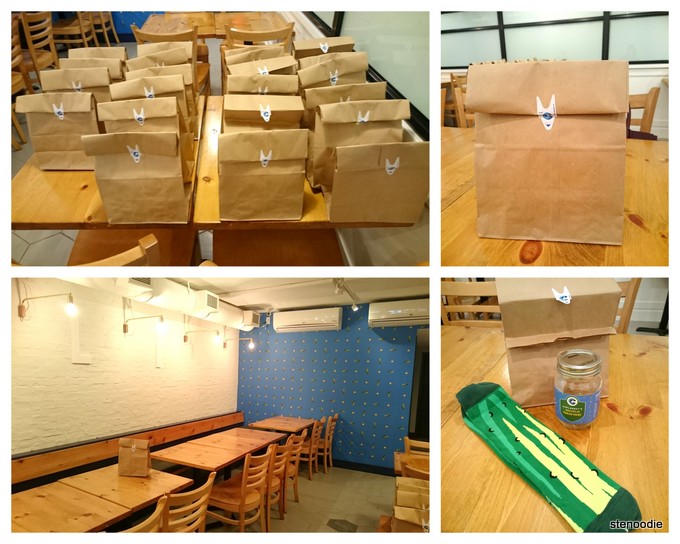 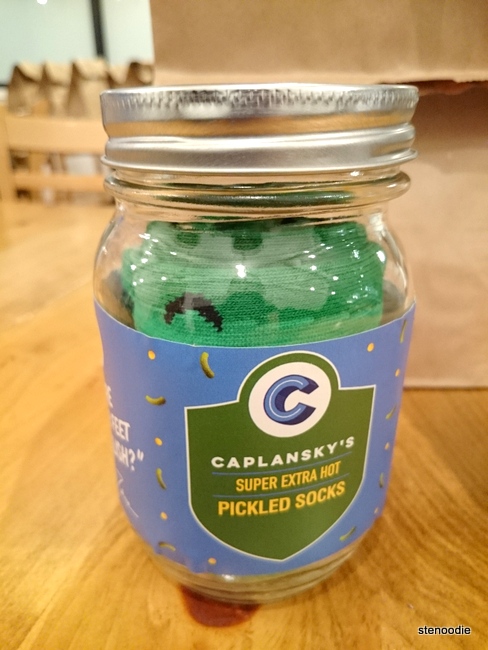 Thanks for the gift, Caplansky’s! I can’t wait to wear these “Super Extra Hot Pickled Socks” XD

Before we left, we made sure that we grabbed a nice little momento from the opening of Caplansky’s first franchise in Toronto.  Inside the paper bag (although simple, it was nice and sealed with a sticker of the restaurant’s newest logo, “C” for “Caplansky’s”), there was a copy of their press release and a jar of their “Caplansky’s Super Extra Hot Pickled Socks”.  This was absolutely adorable and the glass can even included an “ingredient list” of what was in the socks — lots of love and attention put into this!

I want to thank Caplansky’s Deli and Cody for inviting me to their press event and allowing me to share this latest and greatest addition to the Yorkville neighbourhood in Toronto with my readers and friends.  The smoked meat sandwiches were amazing and I can’t wait to go back to try some more! 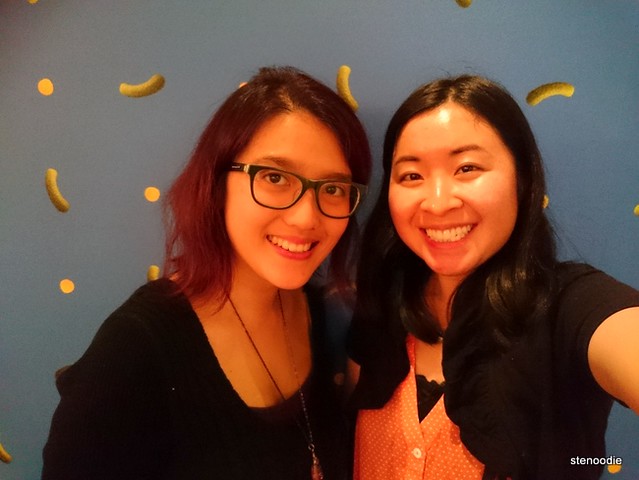 Selfie in front of the ‘mustard and pickle’ wall. So cute! 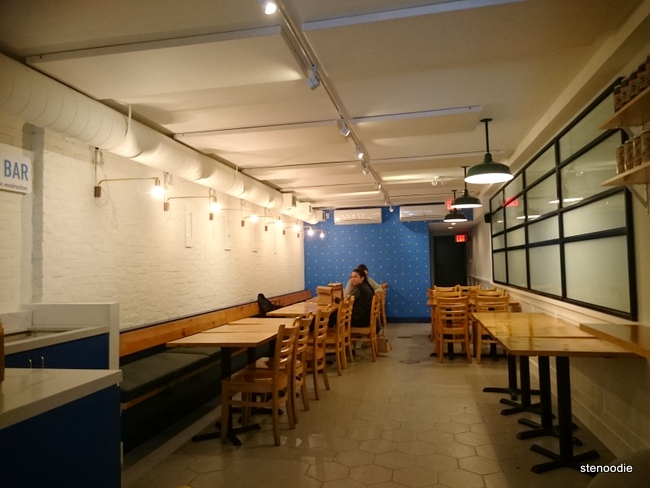 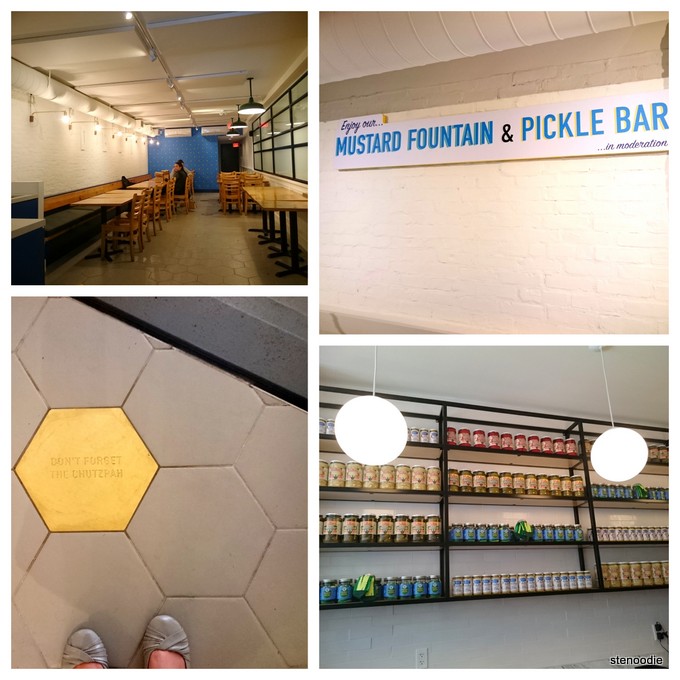 I can’t wait to see their mustard fountain and pickle bar!

FTC Disclaimer:  Although Caplansky’s Deli invited me to a complimentary tasting to showcase their restaurant, the opinions expressed here represent my own and not those of the restaurant.