Visiting Katz’s Deli & Corned Beef Emporium before it closes May 31, 2019 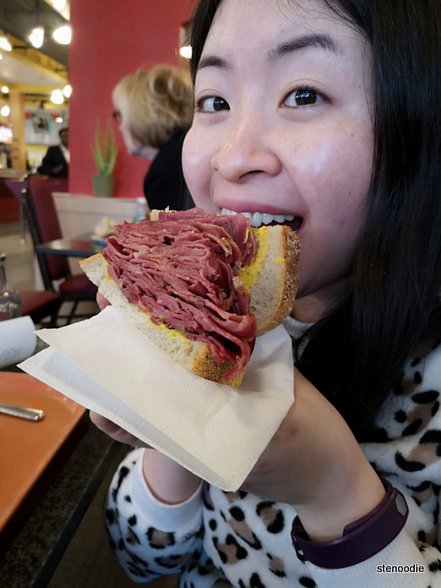 April 27, 2019:  After cleaning up the Don and freshening up at home, we went to Katz’s Deli & Corned Beef Emporium, established in 1970, to get a first and final taste of their famed sandwiches before they are set to close on May 31 of this year.  They are closing to make way for the future development of Dufferin Street.

Katz’s Deli & Corned Beef Emporium has been serving up deli sandwiches like corned beef and pastrami for nearly 50 years.  They are located in North York on Dufferin Street near Highway 401. 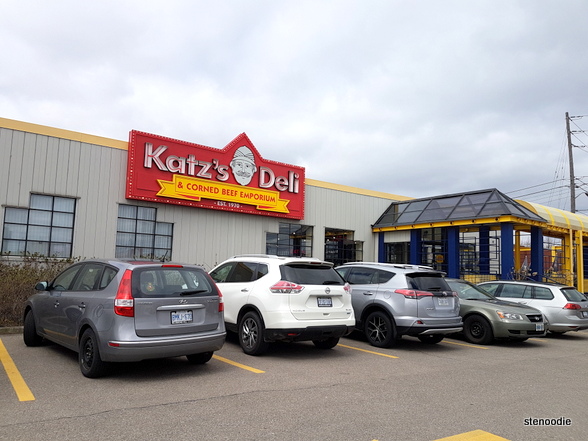 It’s literally a minute away from Yorkdale Mall 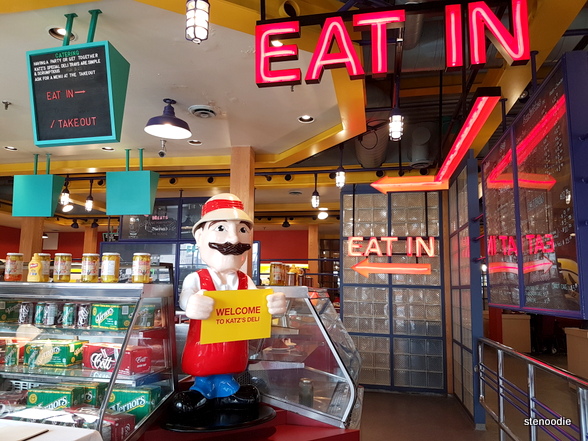 Walk towards the Eat In signs to dine in

Walking in, there was a section for takeout orders and one for the “Eat in” section.  It’s a cafeteria-style restaurant where you pick up a tray and follow the queue to order up your favourite deli sandwiches, soups, or salads.  The pickup station included salads (garden salad, potato salad, tuna salad, egg salad), dill pickles, coleslaw, cakes, and other appetizers.  There was a lady constantly scooping out fresh potato salads or pickles to put out on the counter.  We ordered a number of items to share and then paid at the cashier before selecting a table to dine in. 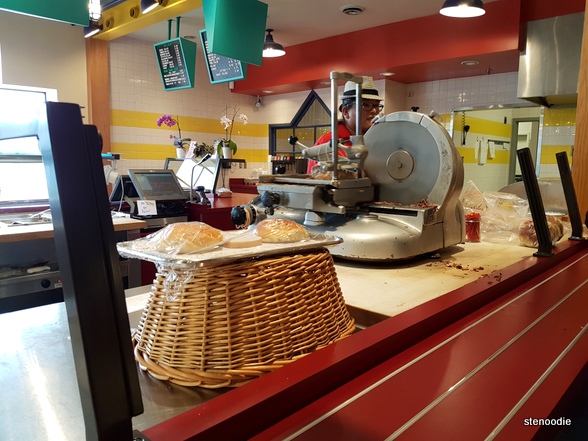 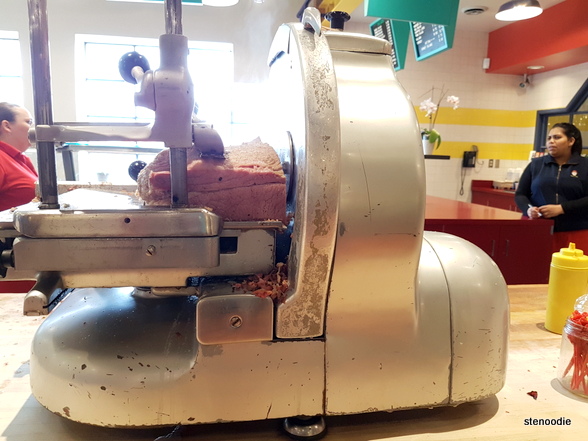 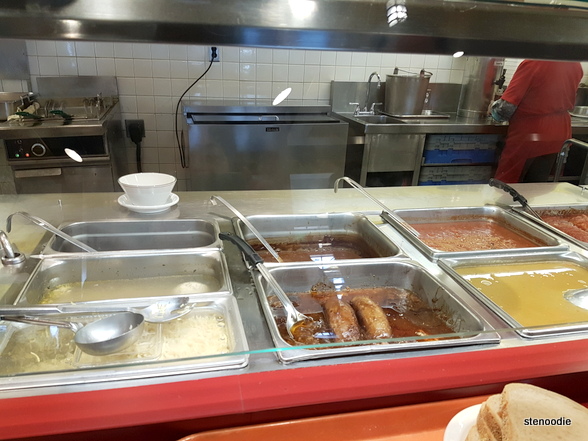 Counter for soups and hot dishes

The dining room is huge at Katz’s Deli!  In fact, they have several dining rooms for you to sit in.  At the time of dining, I couldn’t help but wonder what would happen to all this space once they close up shop on the 31st of May (but now I know it’s because of the development plans).  It’s always tragic to see a gem of a restaurant with a long history close their doors.  There were a lot of customers too during the late lunch hours on this Sunday. 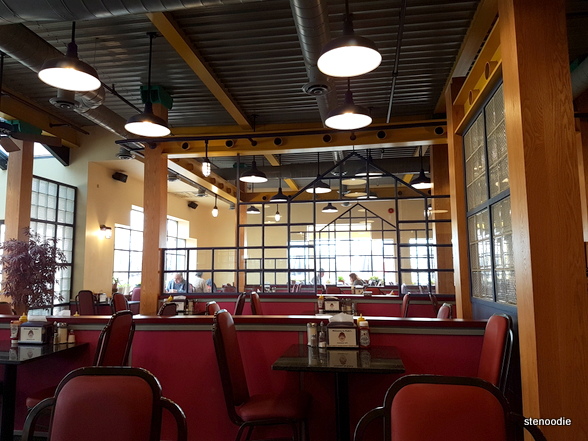 View of the dining room from our table 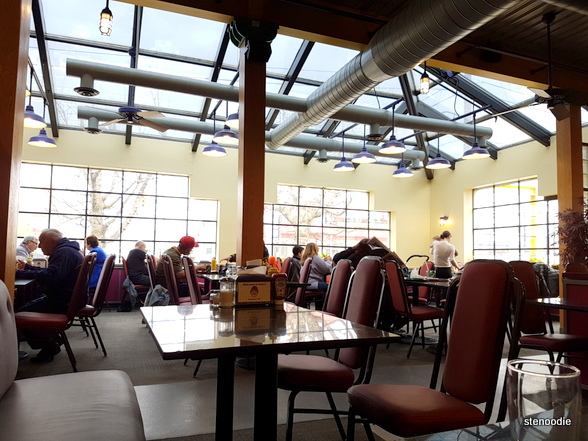 Another sunlit dining room to the left of us 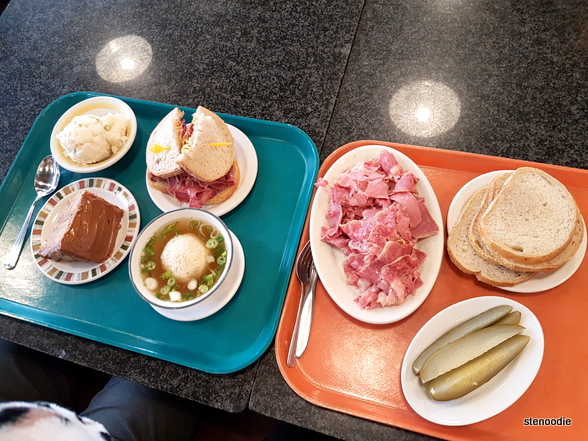 The Corned Beef Plate came with a platter of freshly shaved corned beef and four slices of rye bread for you to create your own corned beef sandwich or open-faced sandwich.  The corned beef by itself was so tasty, juicy, and tender.  It was the perfect ratio of meat and fat!  It also wasn’t overly salty, which was rare for deli meat.  I enjoyed it so much! 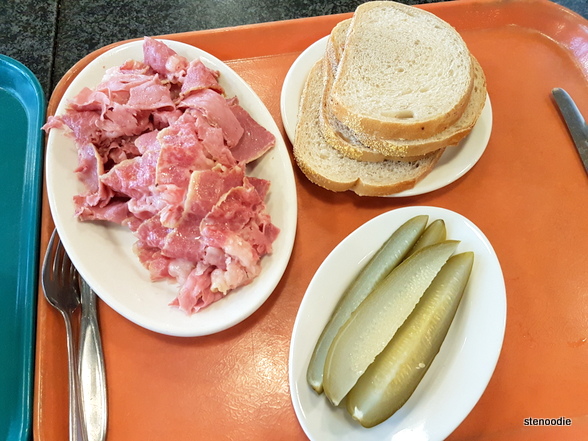 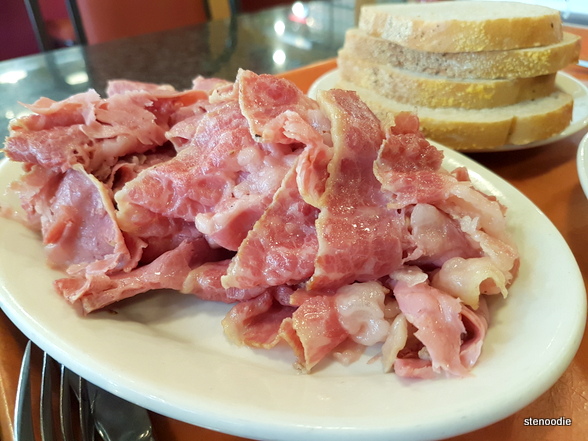 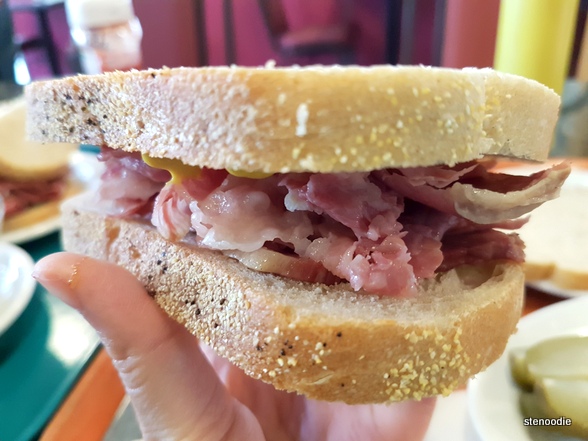 The Mama’s Chicken Soup had a matzah ball and was pure comfort food.  It was delicious.  There were some shredded carrots at the bottom of the bowl too. 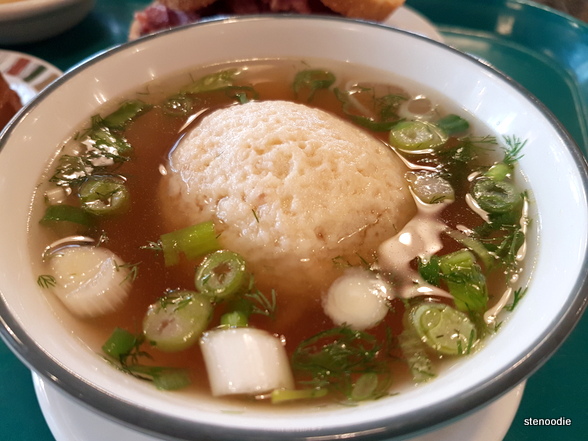 The Potato Salad was simple but absolutely perfectly made as well.  It was tarty enough yet all potato salad with some green onions.  Again, it was delicious! 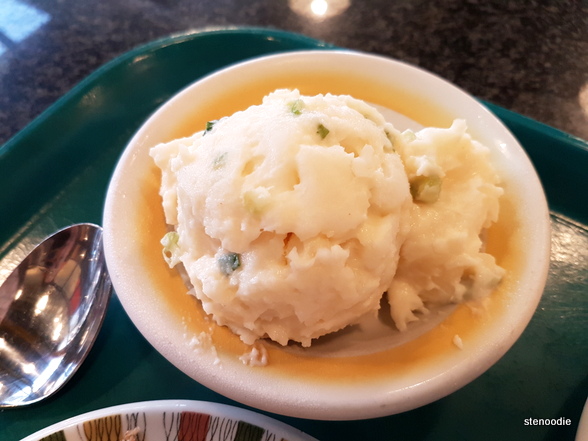 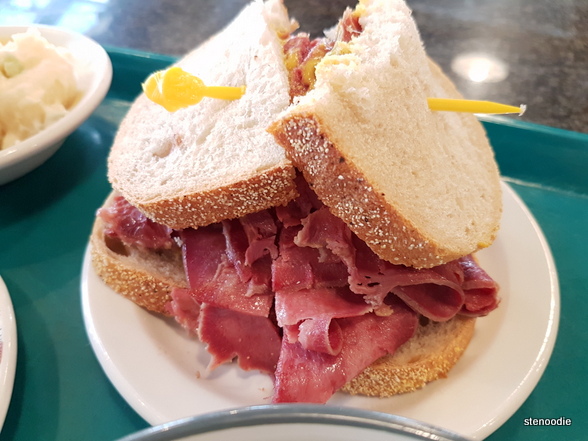 The most surprising item was the Tongue Sandwich on rye bread.  I couldn’t believe how finely sliced the tongue was and how it was also so tender and juicy.  It absolutely tasted like beef tongue when you bit into it, but I’ve never had a tongue sandwich quite like this before.  It was so, so good!  You have to try this if you go! 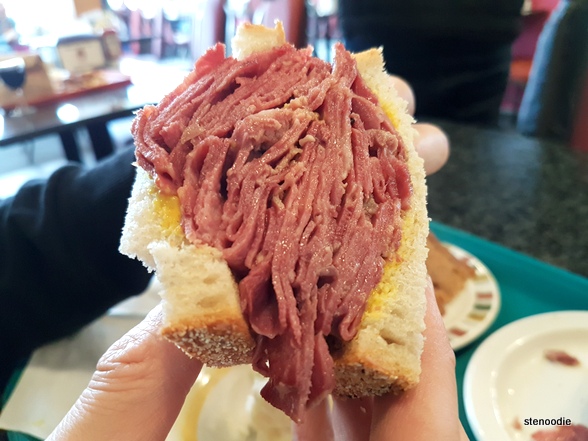 Look at all that finely shaved tongue in the sandwich!

The Dill Pickles were as expected and perfect to eat between the bites of sandwiches to cut down on the feeling of fullness. 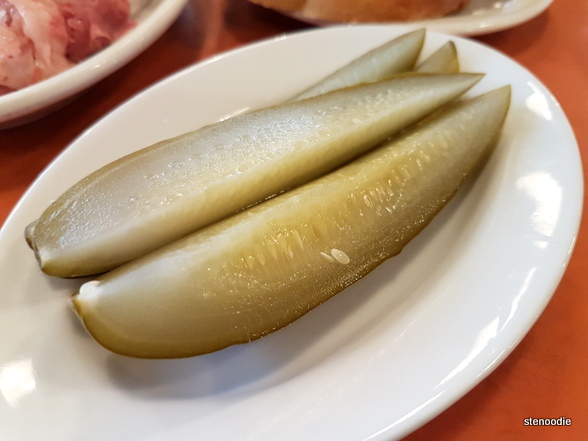 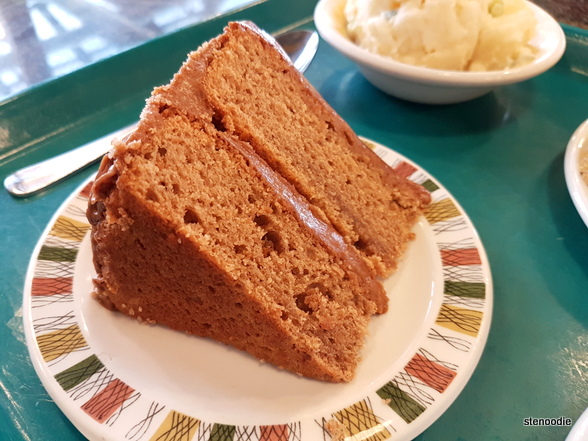 The Banana Cake must have been put out on the counter a tad too long because it was a bit dry on the edges.  It also had more of a brownie texture than regular moist cake.  It didn’t have much banana flavour in it either.  There was some thick caramel sauce that was nice.  Overall, it was a nice dessert but definitely more of a caramel banana brownie. 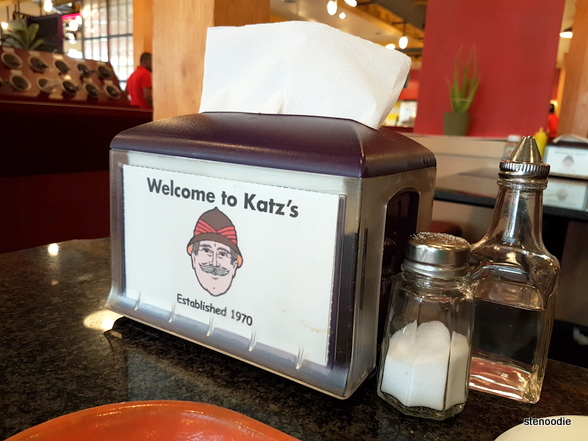 Ketchup, mustard, vinegar, salt, pepper, and napkins at each table 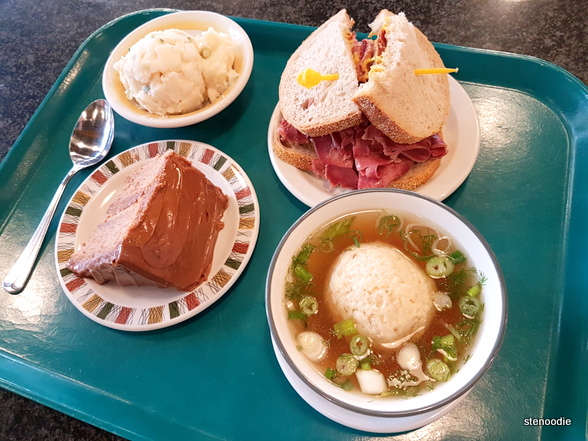 I really enjoyed the food here and was so impressed with the sandwiches.  It’s too bad that they are closing just to make way for the future development of Dufferin Street.

At this time, they don’t plan on relocating to somewhere else, but I really hope they change their mind!  There aren’t enough good deli meat restaurants in Toronto.  A place I really liked in downtown Toronto, Corned Beef House, closed.  Another restaurant, Caplansky’s, also closed as well (only the Pearson airport location remains for now).  Where are Torontonians supposed to get their quality deli sandwiches now?

Farewell, Katz’s Deli & Corned Beef Emporium.  Thank you for your four generations of family recipes and delicious sandwiches (even though it was our first time here).  (I might try to visit one more time before they close.  We brought back some of the tongue sandwich for my mom to try, and she loved it!) 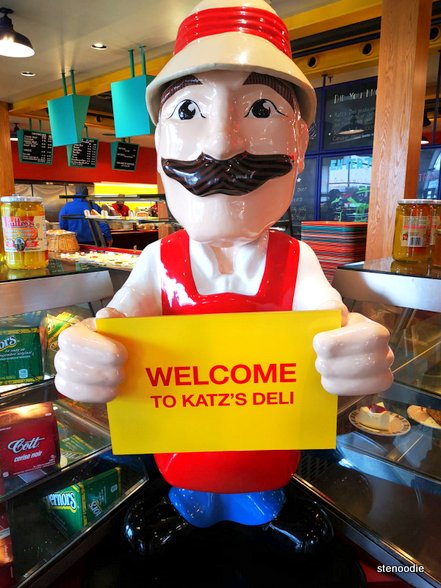 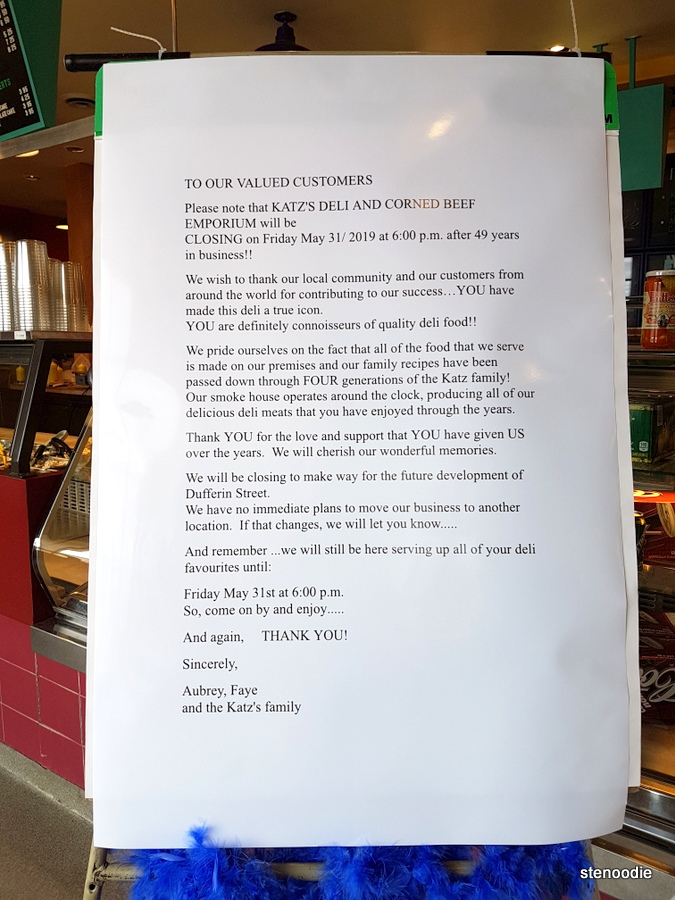 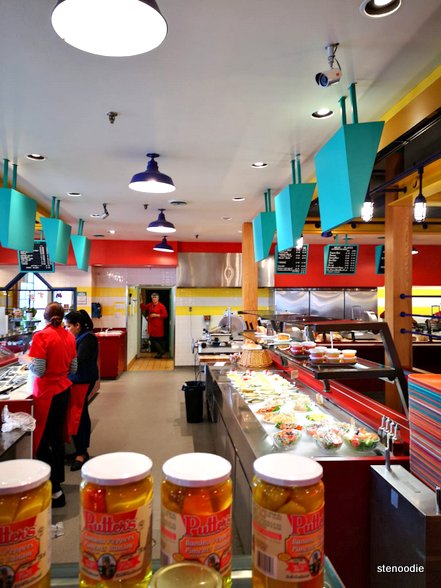 As of writing, one month left of operations

1 Response to Visiting Katz’s Deli & Corned Beef Emporium before it closes May 31, 2019