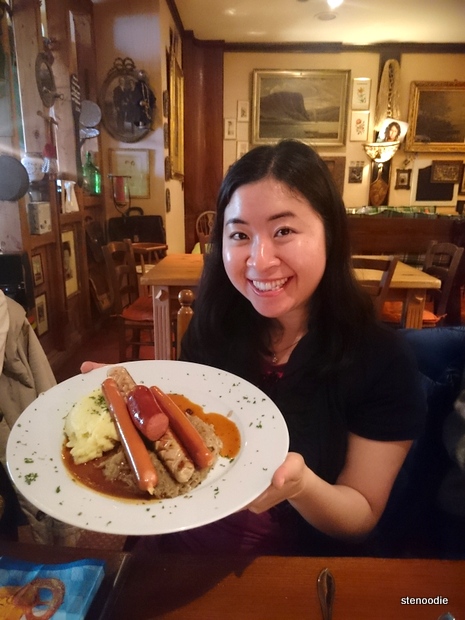 German meal in Germany! Wacht am Rhein located at Rheinzollstraße 8 56068 Koblenz in Germany

After arriving in Trier, Germany in the early morning (what a great sleep that was on the bus), we did some sightseeing at the absolutely gorgeous city of Koblenz and then had lunch at a restaurant near the Rhine River.

It was an absolutely gorgeous day outside and it was a calm mellow morning thus far.

This lunch at the restaurant, Wacht am Rhein, was pre-arranged by the Tian Bao Tour so we paid a price of 20€ per person for a prix fixe lunch. 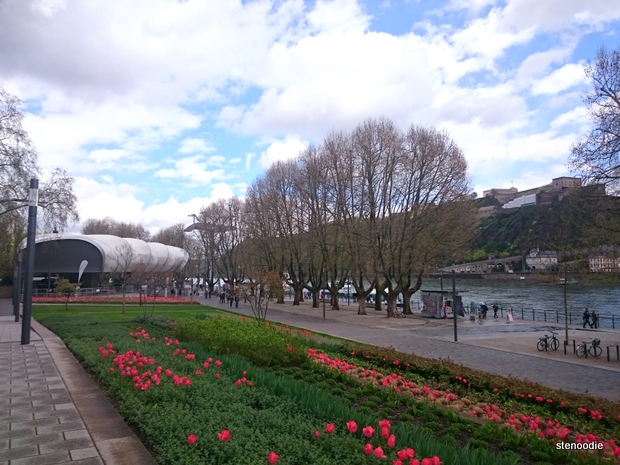 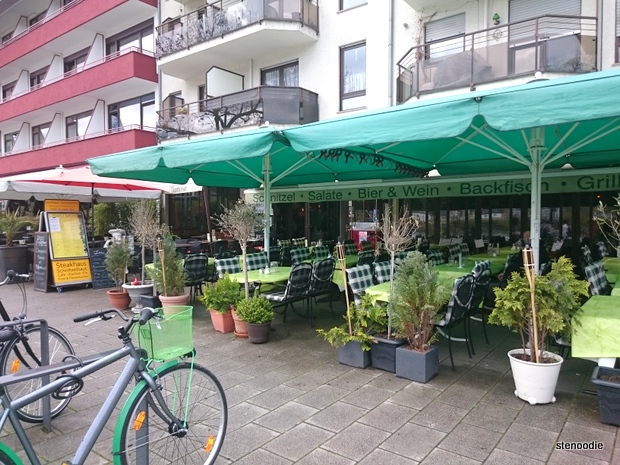 Patio of Wacht am Rhein

Wacht am Rhein was an absolutely beautiful restaurant!  It had an outdoor patio facing the Rhine River with umbrellas shielding customers from the sun.  The interior space was marvelously decorated with tons of old kick nacks and relics from the olden day.  There was a selection of hot irons that dated back to the early days — you could actually put a piece of coal on top of the iron and that’s how you pressed clothes!  Everyone took a lot of pictures inside the restaurant since it was dressed up so beautifully with lots of ancient objects. 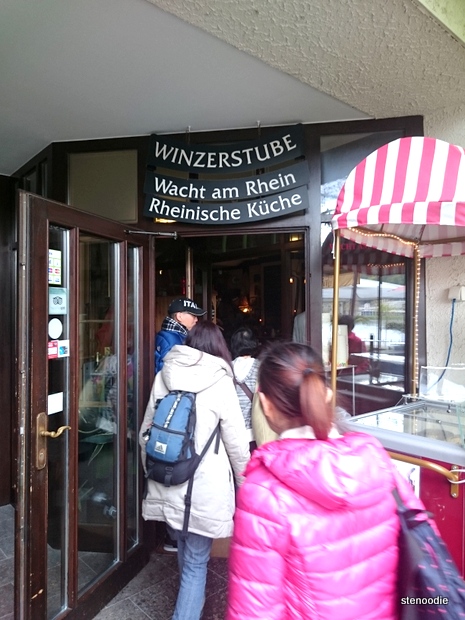 Entrance of Wacht am Rhein restaurant 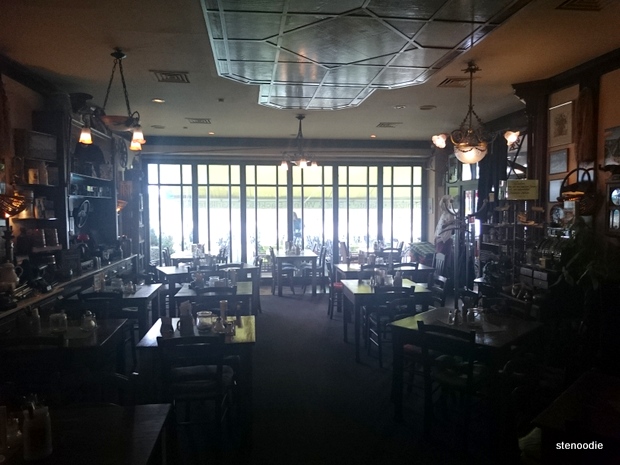 The inside of the restaurant… it looks dark from the backlight but it was so nice inside! 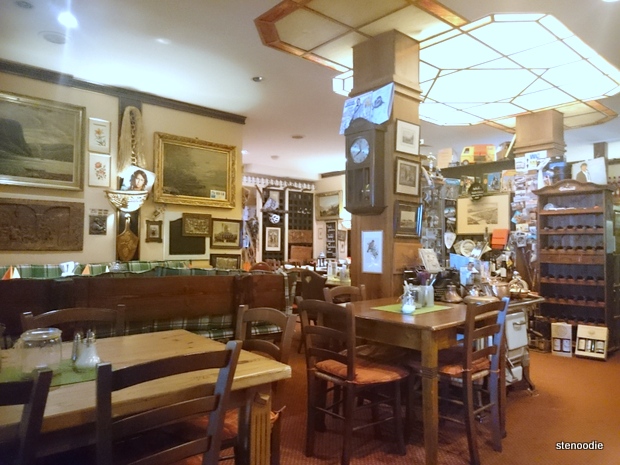 This shows the other side of the dining room 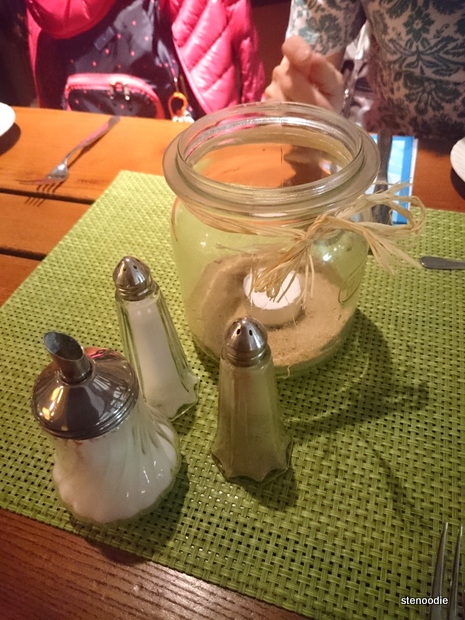 Centerpiece on the table 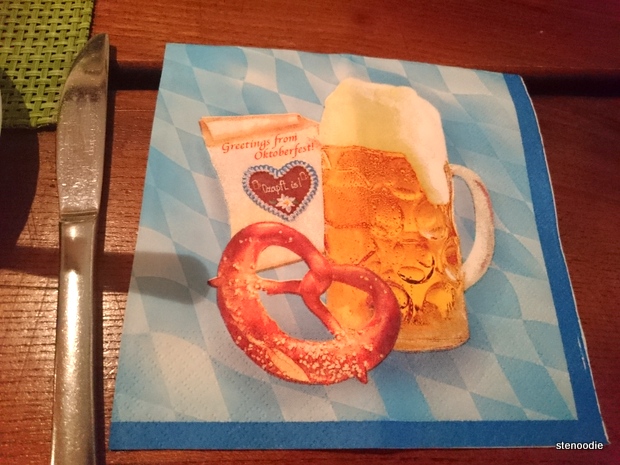 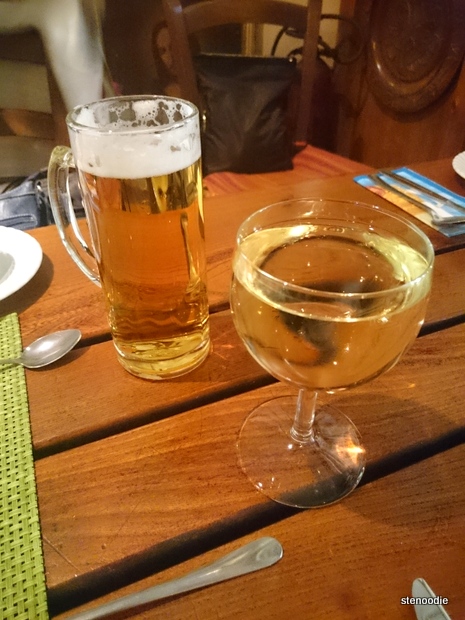 German beer and white wine. Both so good!

We had pre-chosen our drinks and main courses.  The staff here were very friendly and nice.  All of the food arrived timely (it was a scheduled lunch for a tour after all so they knew to prep everything and ensure the food was served in a reasonable period of time).

My mom and I chose the white wine in addition to a mug of beer.  C’mon, being in Germany meant a big tall glass of beer!  The beer tasted great and the white wine was even better.  It was so clean and sweet tasting. 🙂

I was so excited about being in Germany and dining here that I had such a bright smile on my face the entire meal.  (I also think the lighting of the restaurant had a lot to do with the great photos 😉 ). 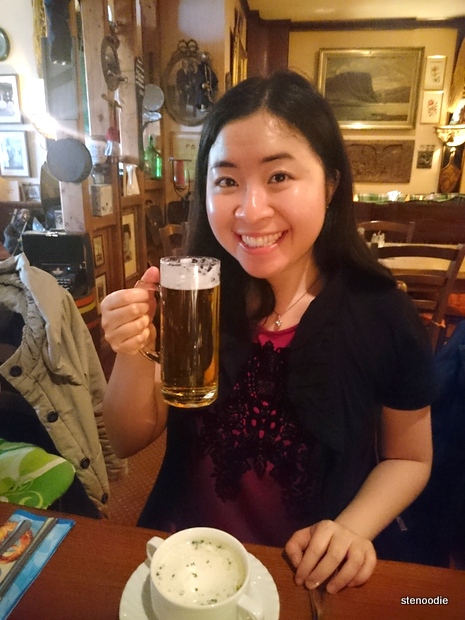 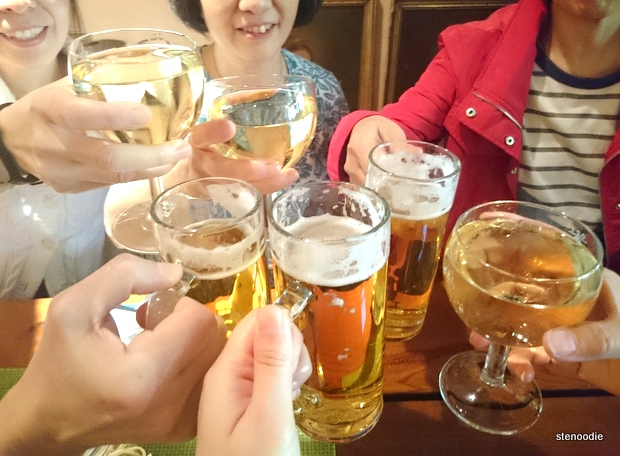 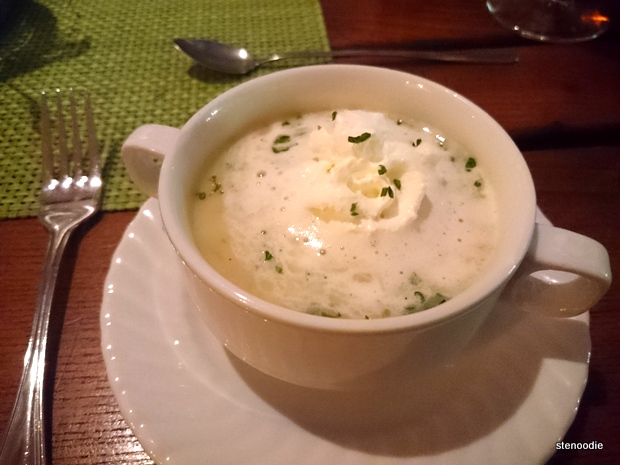 First, we were served a potato soup that had some whipped cream on it.  After the photos were done, the whipped cream on the top had already deflated haha.  It was fairly light despite being a potato soup and it tasted good.  The bread that was served with the soup was quite soft (not characteristically hard as the ones in Paris). 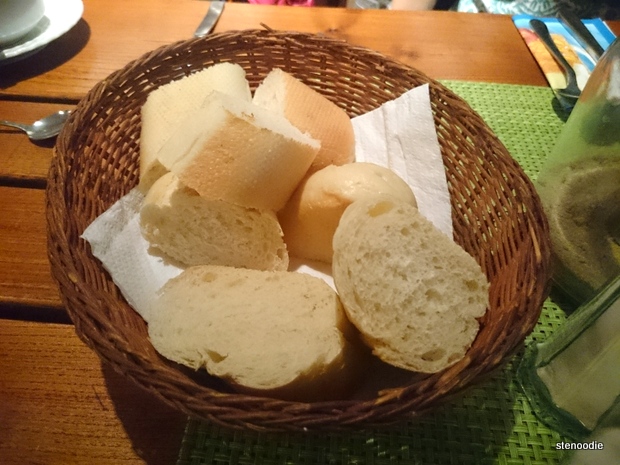 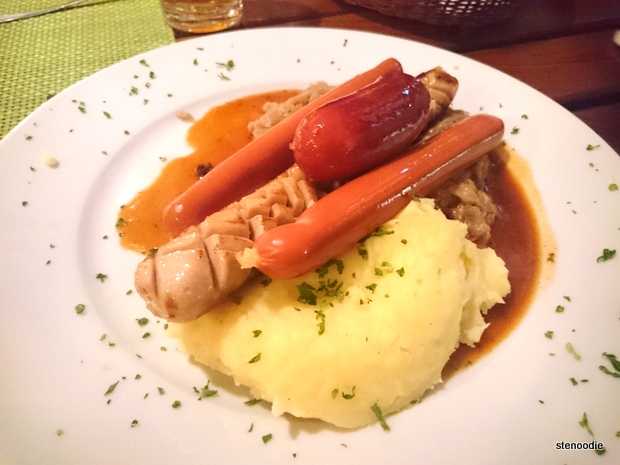 The two lunch options were some German sausages or German pork knuckle.  My mom and I opted for one of each so that we could share.  The German Sausage dish came with three types of sausages, mashed potatoes, gravy, and some sauerkraut on the side.  Mmm, the mashed potatoes were to die for!  These were perfectly made and had the right consistency and texture of how mashed potatoes.  I loved it!  There was pork sausage (Knackwurst probably), chicken sausage (Nürnberger Rostbratwurst?), and a regular hot dog sausage (Bockwurst?).  I really enjoyed the chicken sausage more than the other ones.  This was such a gigantic portion!  The sauerkraut was delicious as well and a great combination with the meat and carbs.  (Just to clarify, I matched the look of each sausage to this site… I’m not sure how accurate I am haha.  Does anyone know the proper name of the sausages I ate?) 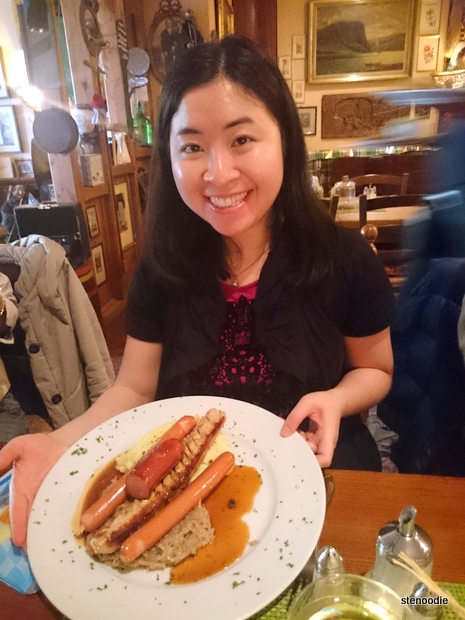 Look at how gigantic the portion was! 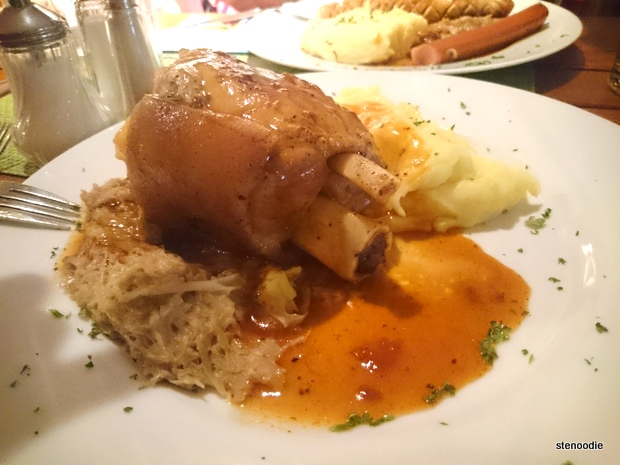 It was actually so tender and also came with mashed potatoes and sauerkraut.  Even though the knife we had wasn’t particularly specialized for meat cutting or sharp, it was easy to slice through the knuckle.

Different parts of the knuckle tasted different in texture.  The meat on the outside tasted rougher than the meat underneath the skin.  It was all around delicious and tender though and really well cooked.  It wasn’t too salty either! 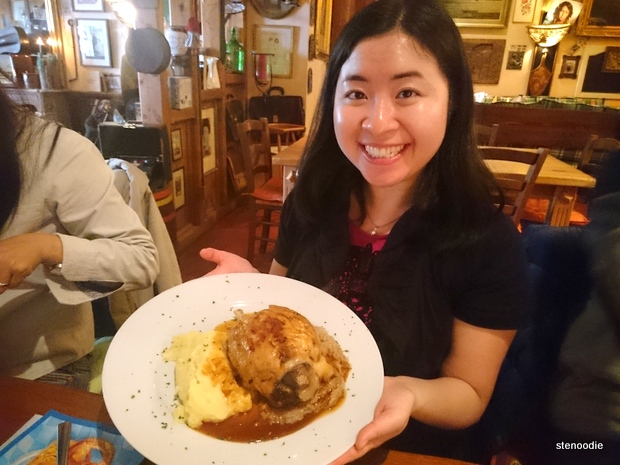 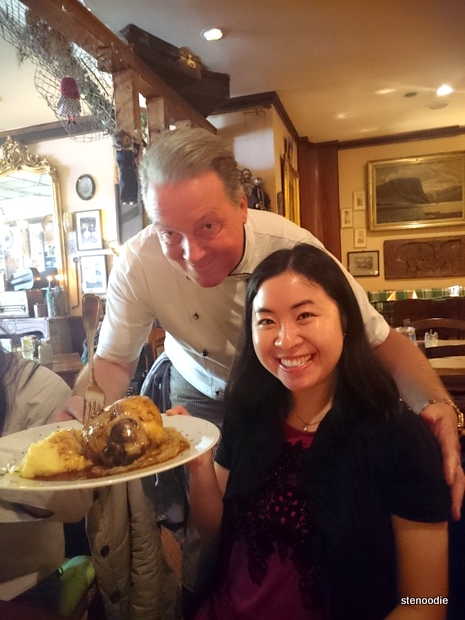 Photo with the chef. He was the one who insisted on stabbing the fork into the dish like that XD

By this point, we were getting quite full due to the gigantic portions of the plates.  Unfortunately, we weren’t able to finish everything.  I do hate wasting food but as we were travelling, there was no way I could doggy bag anything either.  Ah well. 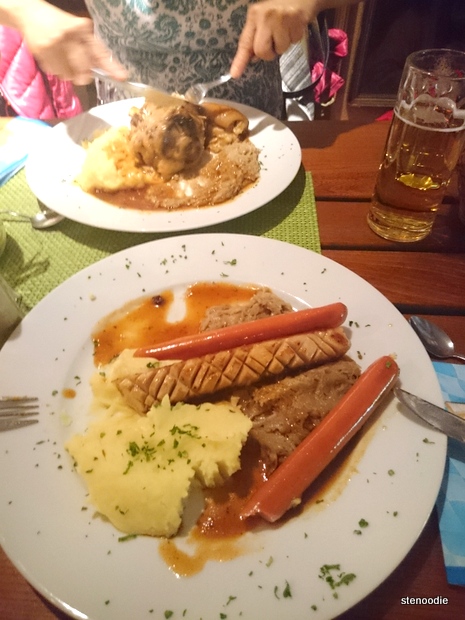 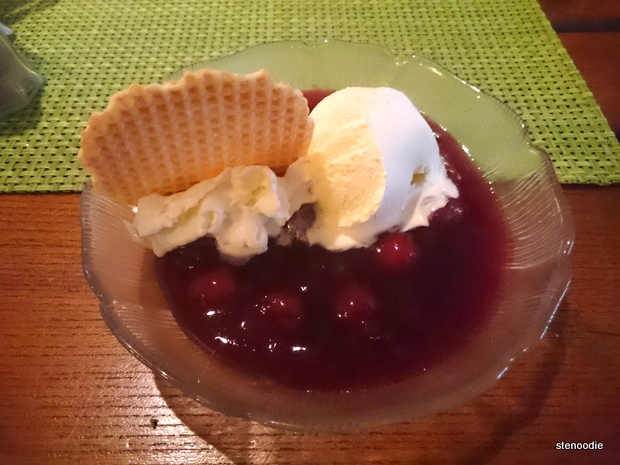 The entire combination was really great and the cherry jam was actually really delicious!  It tasted different than the ones that I have in Canada as it tasted more rich and fresh.  Mmm.

This was such a fantastic lunch and I really enjoyed it! 🙂 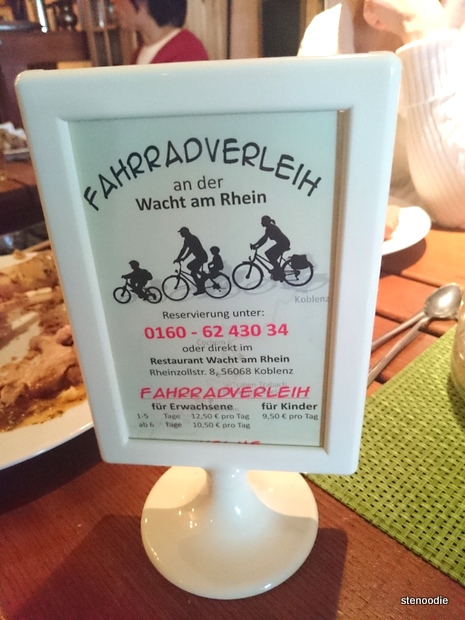 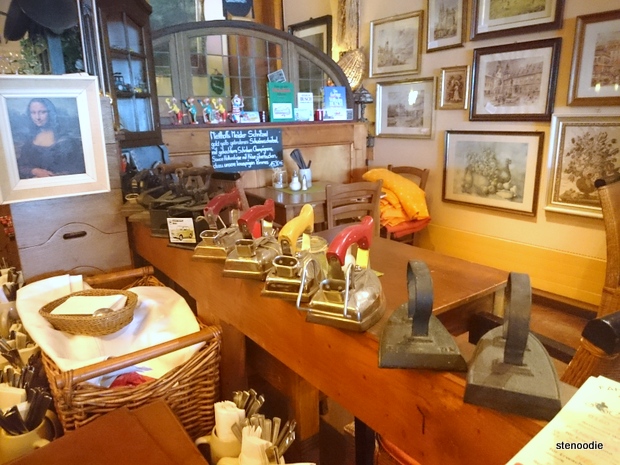 Look at all those irons! 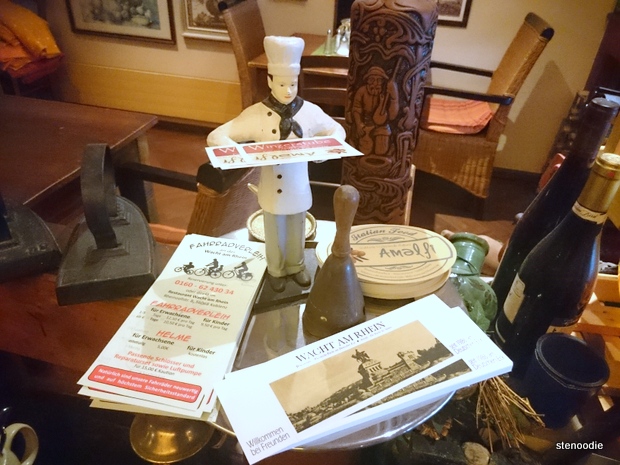 Everything was so neatly placed in the room 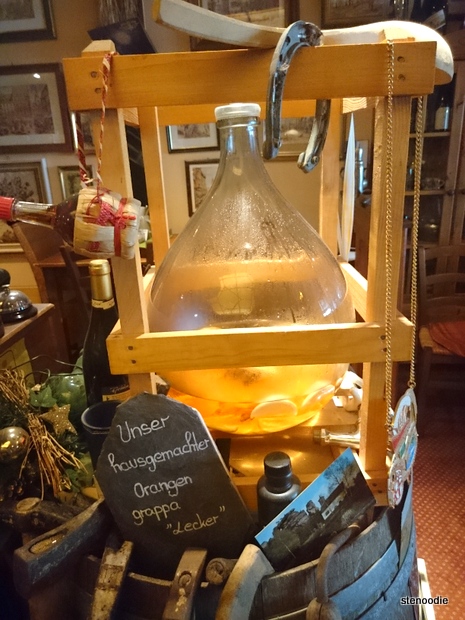 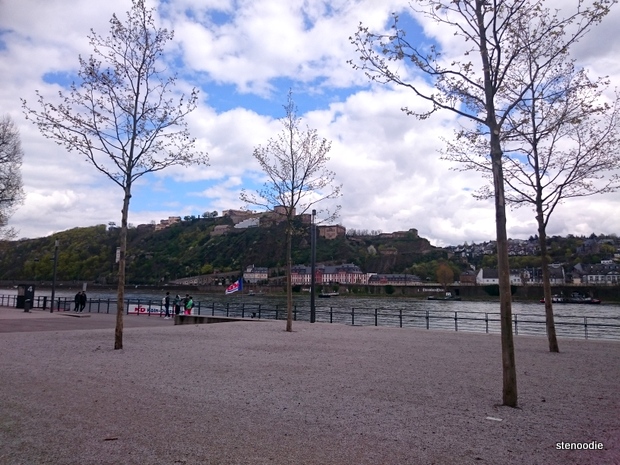 It was a beautiful day outside! Next up, we were going to take a cruise on the Rhine River! ^_^