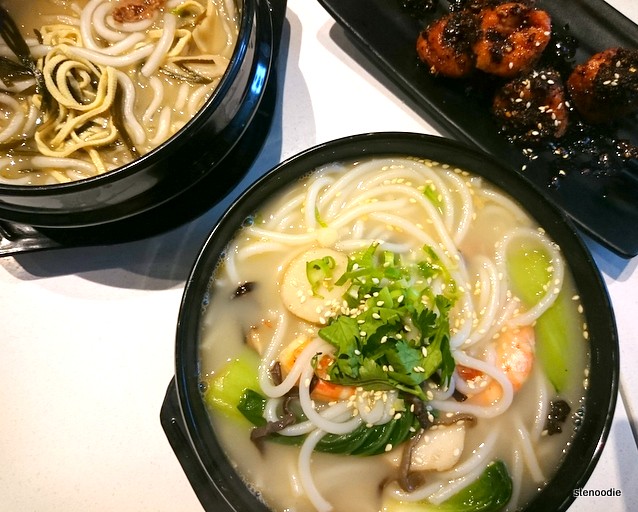 Even though I didn’t enjoy my first visit to Potato Noodle Soup of Bai, when I found out that they had opened a brand new full-service restaurant at Langham Square and we were conveniently in the area looking for dinner, we decided to walk in to try it out.  The first location of Potato Noodle Soup of Bai appears in the food court on the second level of Pacific Mall.  For those of you who want to read the review I did of that location, you can click here.  During that visit, I didn’t like the noodles there because I was excessively thirsty after the meal due to the massive MSG content in the soup base. 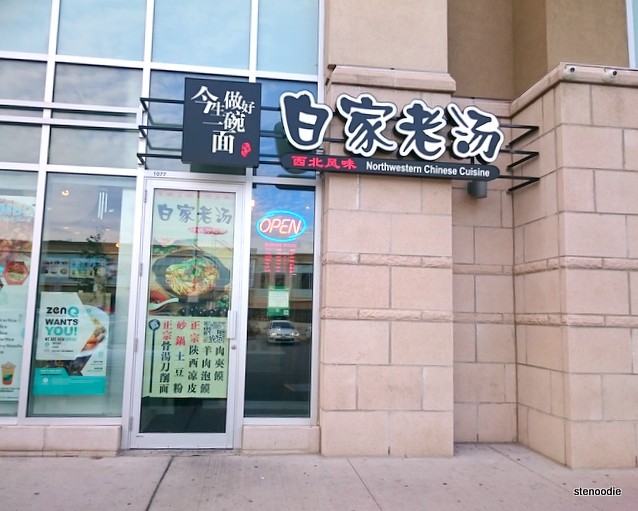 Potato Noodle Soup of Bai located outside of Langham Square right next to Zen Q! 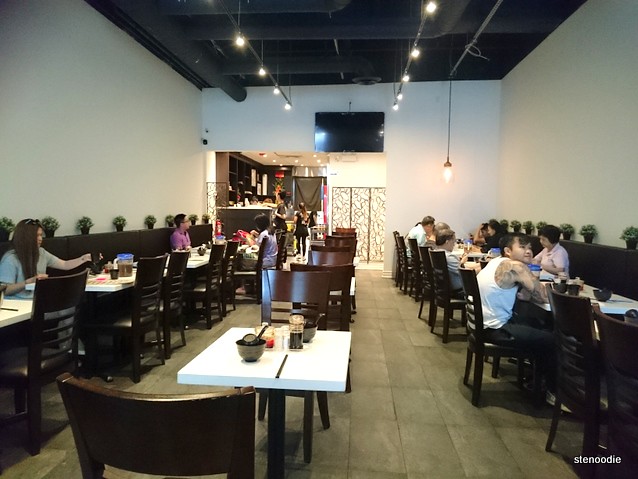 The inside of Potato Noodle Soup of Bai interior. It needs some decor on the walls lol

Walking into the restaurant, it was a little awkward because the staff didn’t come to greet us so we just gestured we were a party of two and chose a table for ourselves.  I thought that it was awkward that we were given only one menu to share while the table next to us (also a two-party) each received one menu.  What’s up with that?  Already, my impression of this restaurant was off to a bad start. 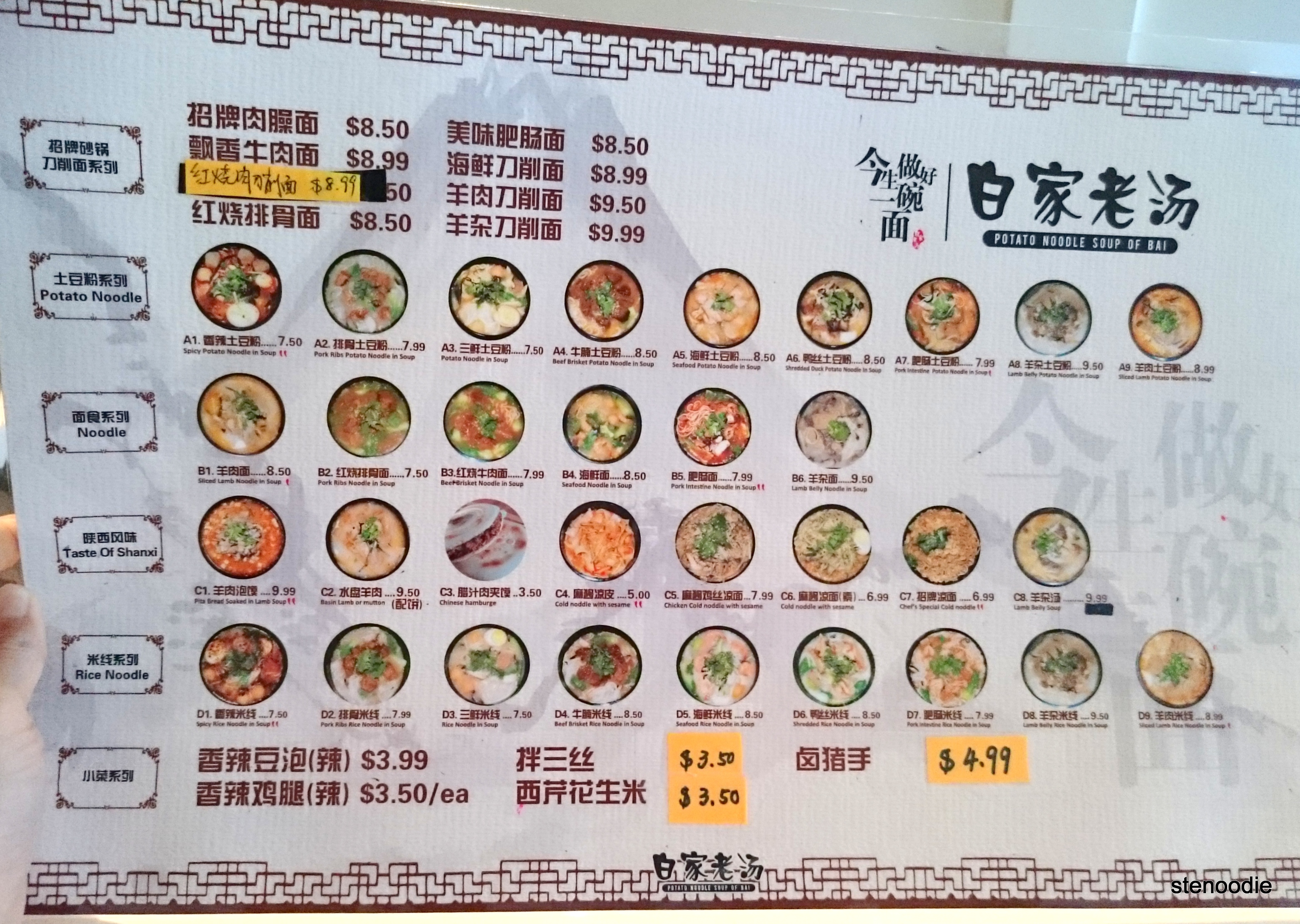 We chose their namesake, one bowl of potato noodle with beef brisket, and one bowl of seafood rice noodle (after the Lamb Belly in Noodle Soup was sold out).  We also ordered the spicy fried tofu puff appetizer (the appetizers were only written in Chinese on the menu — no English).

I wasn’t impressed with how the staff came to inform us that the Lamb Belly in Noodle Soup wasn’t available.  The male staff literally rushed over to our table and shouted something to me in Mandarin.  Uhh, I don’t understand Mandarin.  Luckily, my mom did and so it was understood that the bowl of noodle of not available.  But still, I thought it was rather rude to assume that someone speaks their language and there were no manners involved when addressing a customer. …

The food arrived in a reasonable time.

When our second bowl of noodles arrived on the table, the older female staff member came out after the bowl had been placed on our table to inform us that it was the wrong order and that our order would be coming soon and told us “to be patient”.  Uhh, we weren’t in the wrong here.  We didn’t even know that it was an incorrect order because there was seafood in the noodle bowl; it was the type of noodles that were different.  Again, the approach was very abrupt and I would say rude.

Now in terms of the food, the Spicy Fried Tofu Puffs were covered with lots of dark spice and were spicy in a “ma-la” way.  It was a Northern Chinese type of preparation and it was fine and spicy enough for my liking. 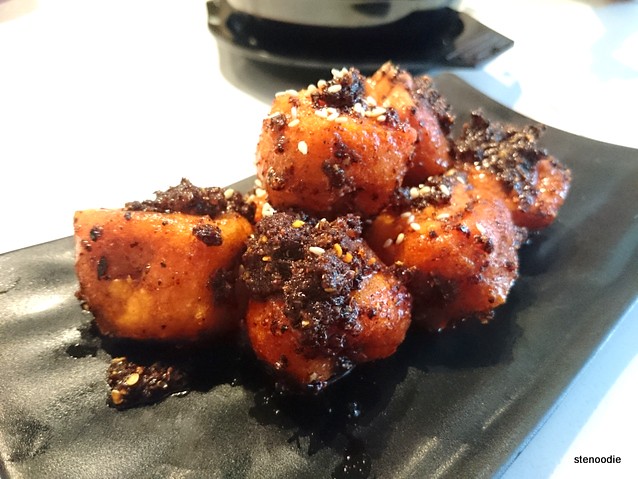 The Beef Brisket Potato Noodle in Soup was quite good.  The potato noodles were very chewy and were semi-transparent.  I really enjoyed the tenderness of the beef brisket; they weren’t rough at all!  The soup was very fragrant and I suspect again that they used a lot of MSG in it. 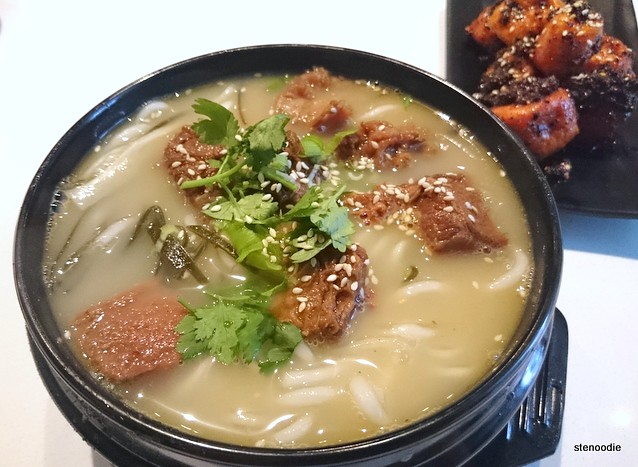 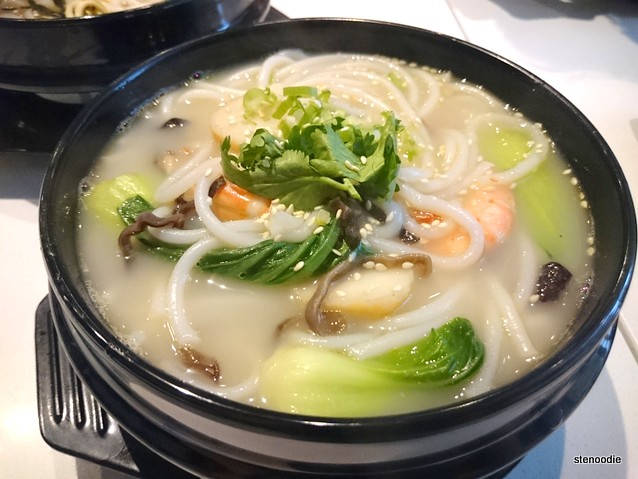 The second bowl of noodles, the Seafood Rice Noodle in Soup, were similar in portion and served also in a black bowl reminiscent of Korean hot stone bowls.  The soup broth in this was more clear and smelled of seafood.  The rice noodles were average and bouncier when compared to the potato noodles.  There were five shrimps in there and two half-fish balls.  I guess five shrimps and one fish ball are considered “seafood”. …

Needless to say, I will not be running back to this restaurant.  The service was quite bad and while the noodles were much more decent this time than the first experience, I wasn’t a huge fan of the experience in general.

(However, thinking about it, they are a new restaurant with (very visually new) inexperienced young staff so perhaps if you go in a few months, they will have sorted themselves and will have better service.  Let’s hope!

[Improvements for the staff include:  Not all hanging around/clustering in the kitchen area and not attending to the dining guests and guests who are arriving at the door; being more professional and courteous when addressing customers; learning to speak and use English — not customers speak Mandarin; better general waitstaff professionalism and courtesies.]