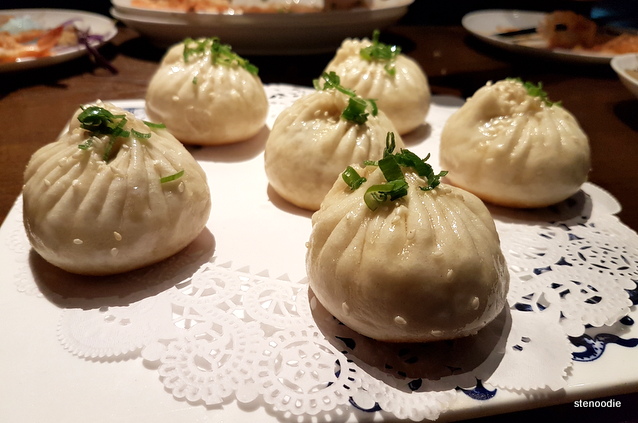 I had the pleasure to be invited to 98 Aroma last night for a wonderful tasting dinner.  98 Aroma is located at 440 Spadina Avenue near College.  It is right in the heart of downtown where Chinatown is in Toronto.  98 Aroma aims to serve fine Chinese cuisine, specifically that from the northern part of China.  I was in for an absolute treat and I was so excited!

One of the best parts of this tasting dinner was that it was an intimate meal where the owner and one other server were the ones who catered to us — the restaurant is actually still quite new and low on staff.  We were a party of four which made it so perfect for sharing dishes and enjoying the food together. 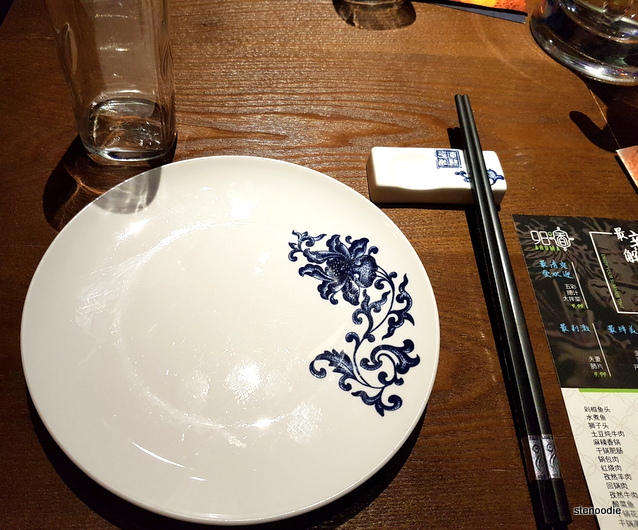 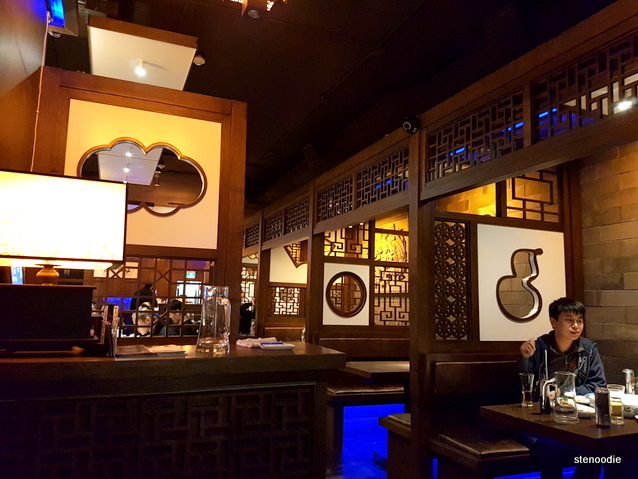 The inside of 98 Aroma

Upon arrival, Raymond of @travellinfoodie and his friend Veronica were already there.  We sat at the table closest to the entrance and window where we got the most light in order to take the best photos during our meal.  The inside of 98 Aroma was gorgeous.  Everything was made with wood and the decor was all very old-style Asian and chic.  It would be a great date place as well as a nice spot for a family dinner or with friends.

The tasting menu for that night was set already but we did get the pleasure of ordering extra dishes of our choice afterwards.  We were eating family style that night where we shared all of the dishes with each other (we got to try so many dishes this way!). 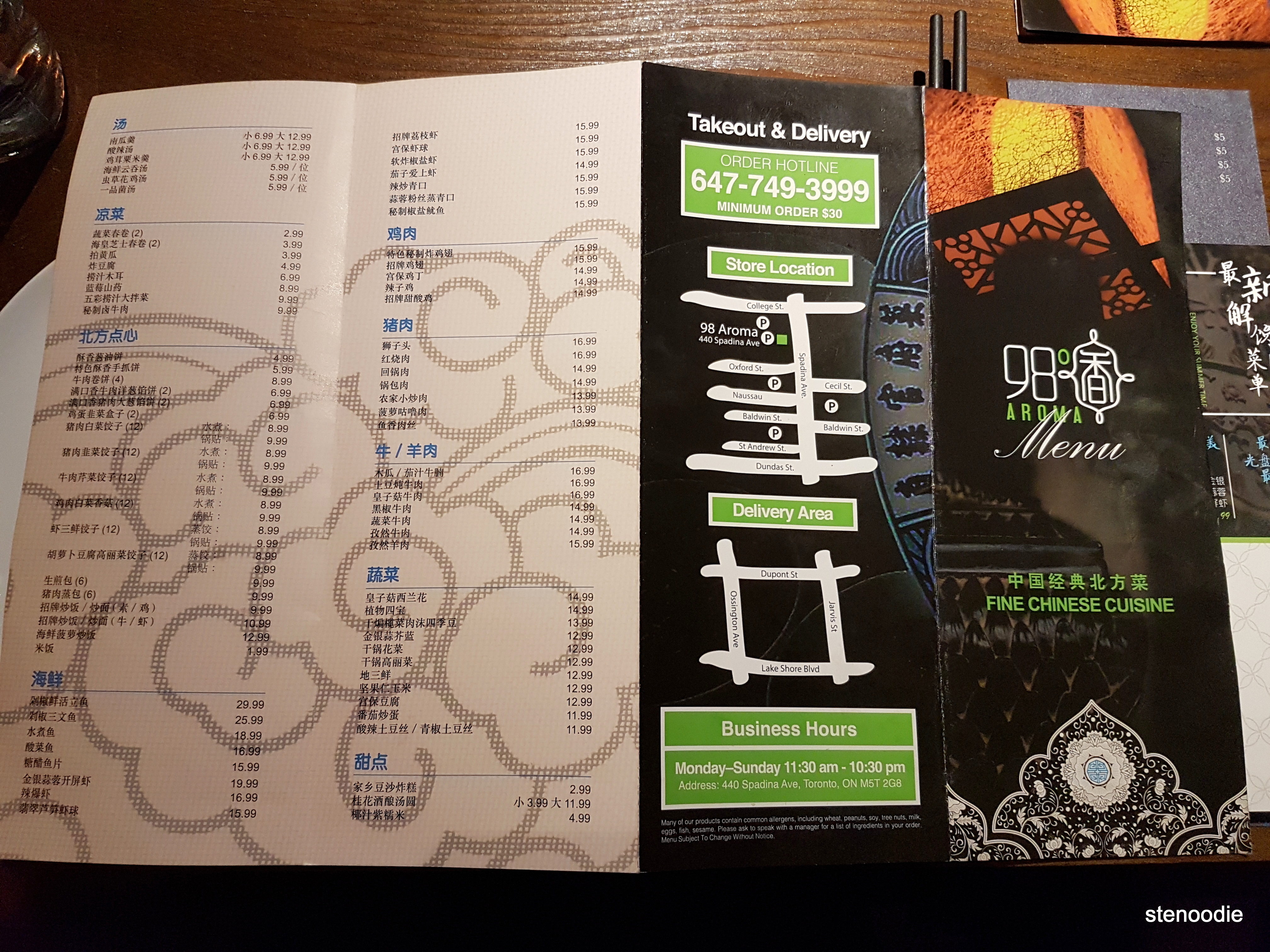 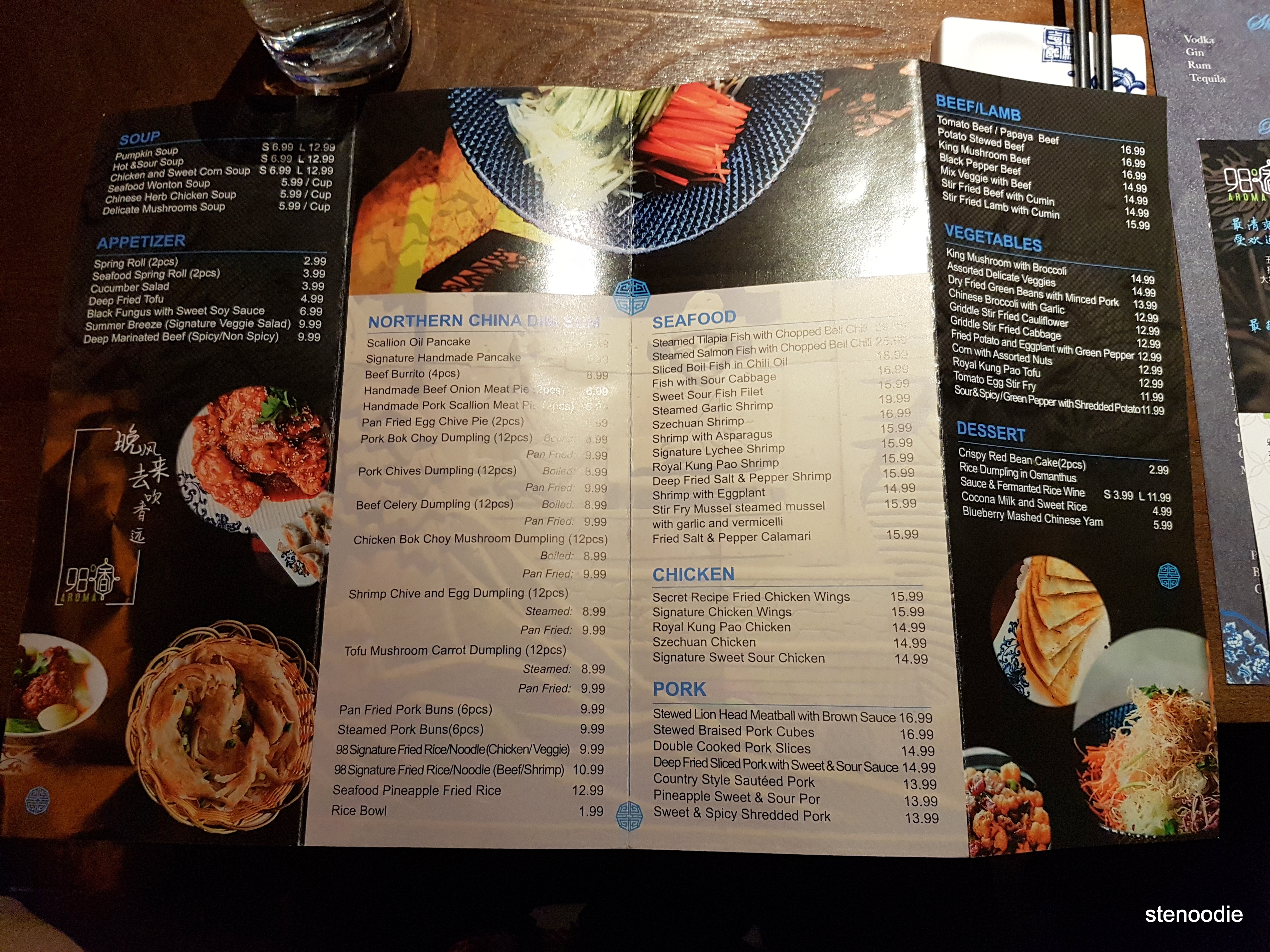 First, we started off with some cocktails.  Upon asking the owner what drinks were popular, he mentioned the Long Island Iced Tea or the Sex on the Beach.  Half of us opted for the first and the other half opted for the latter one. 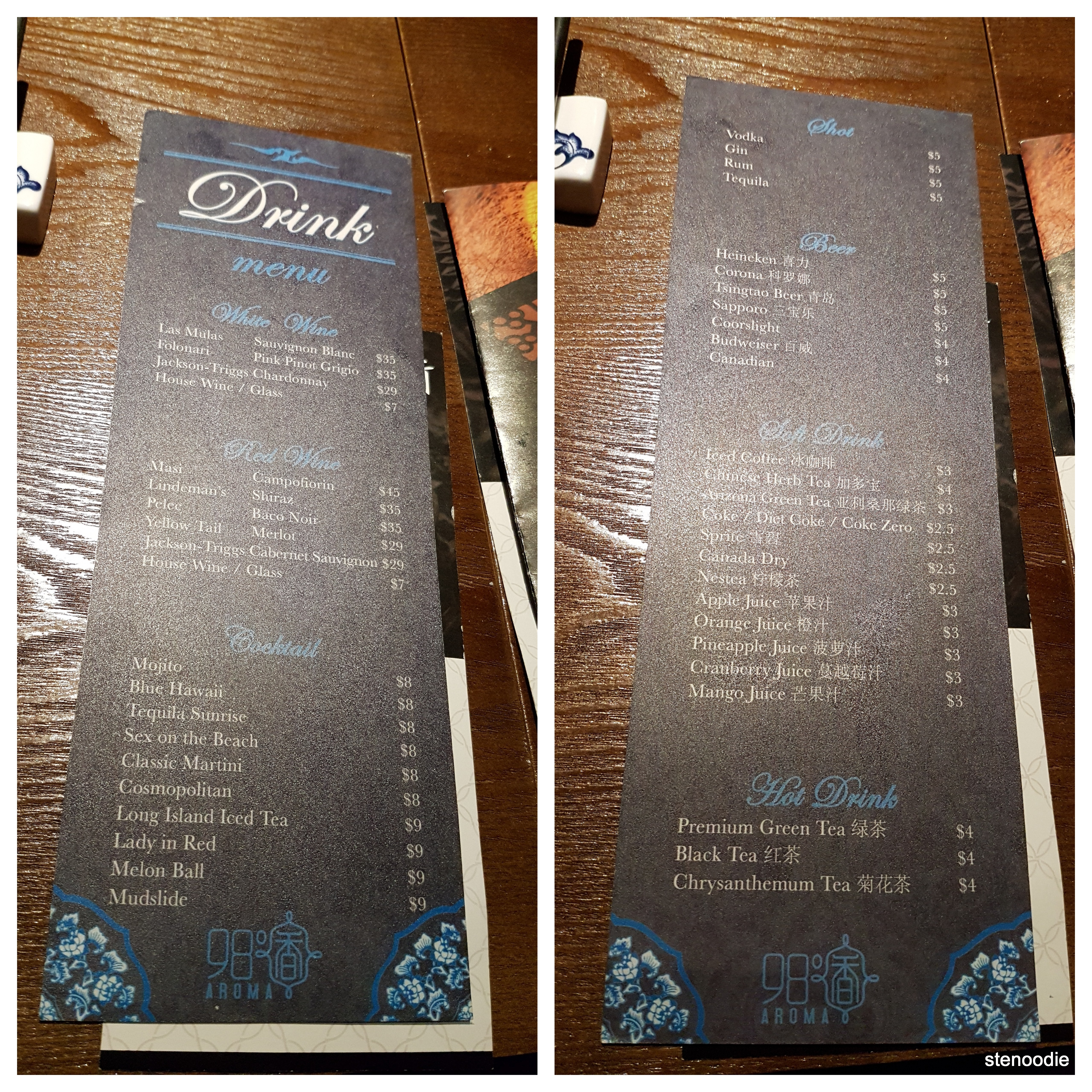 I am not a frequent drinker of Long Island Iced Teas but this one was fairly good.  The alcohol content in it was noticeable upon drinking but I liked the tea taste in it. 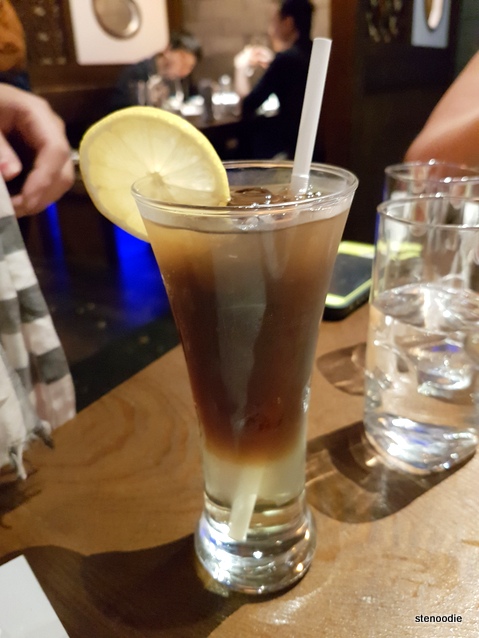 The dishes of our tasting menu arrived quite quickly.  (By the way, the restaurant has free wifi for you to use and they also have free parking at the back of their restaurant — really handy to know for those arriving by car.) 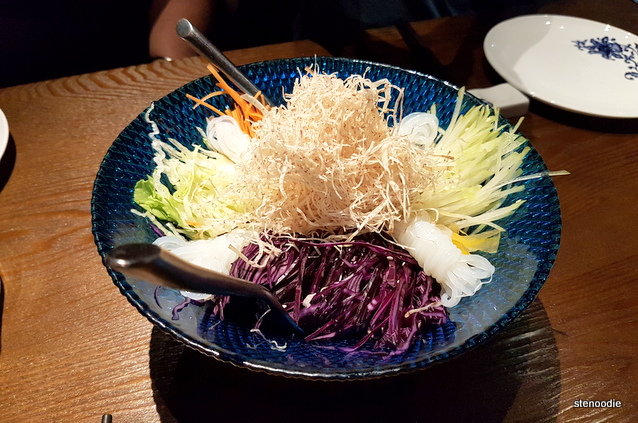 The first item that we received was the appetizer called the Summer Breeze, their signature veggie salad.  It was made with a combination of different vegetables all shredded into a very aesthetically pleasing dish.  Ricky informed us that we had to mix it together from the top to the bottom so that the sauce would be integrated evenly.  What was funny was that this first dish was missing the sauce so he asked the kitchen to prepare us a second Summer Breeze which did have the sauce the second time.  The sauce definitely made the salad really appetizing and tangy and was a great starter dish.  I especially liked the shredded taro that was in the salad.  This salad reminded me of the multi-ingredient mega salad that I tried at Lee before called the Singapore Slaw. 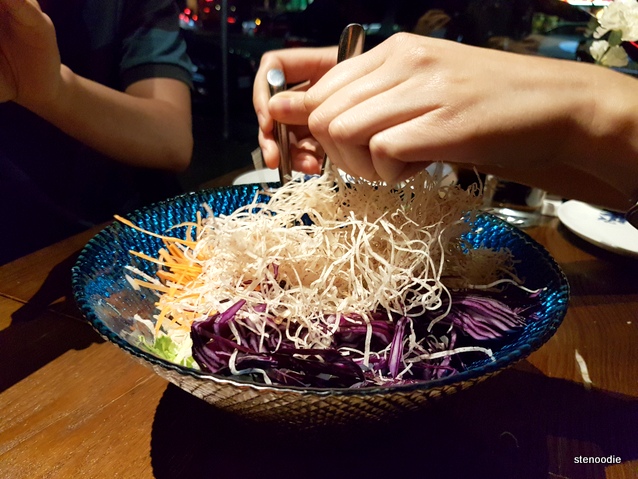 Mix it all up together 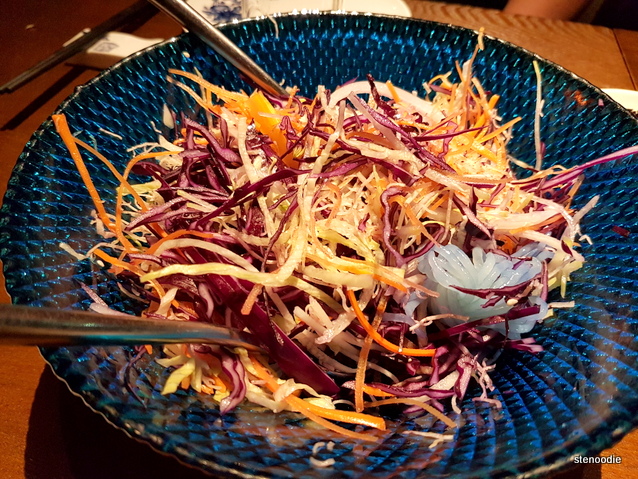 Ta-da! Tasted a lot better than it looks here

The vegetable dish arrived next.  This was an “Assorted Delicate Vegetables” dish comprised of four vegetables: broccoli, carrot, black fungus, and a kind of root.  It was simply stir-fried and a healthy dish on the menu. 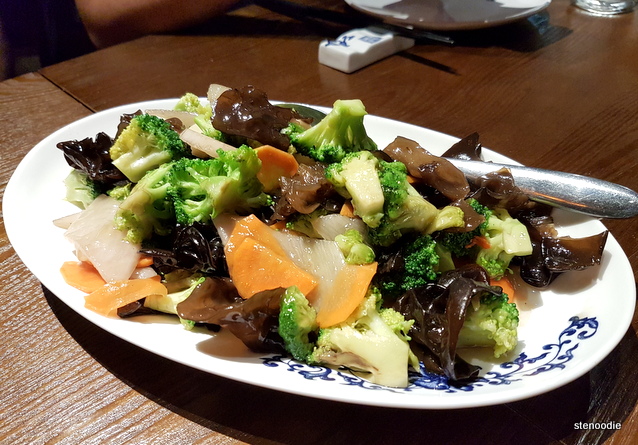 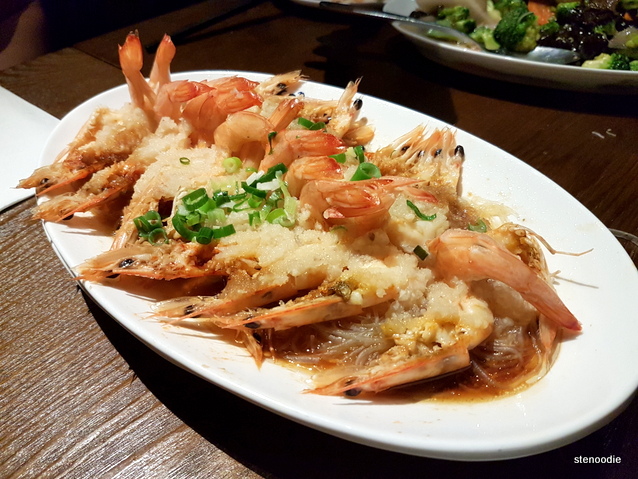 The Steamed Garlic Shrimp arrived next.  This looked amazing.  Many people love shrimp and I loved how each of the shrimp was doused in garlic.  There was a layer of vermicelli on the bottom of the dish which soaked up all of the sauce.  It was so delicious!  The only thing was that the shrimps were a little mushy and not as fresh as I would have liked.  Otherwise, this was an amazing shrimp dish. 🙂

The Stewed Lion Head Meatball with Brown Sauce was a pleasure to eat.  You have to eat this hot and fresh once it has arrived to the table because once it gets cold, it’s not as good to eat anymore (like with most Asian food).  The giant meatballs were made with pork and oh-so tender and soft!  It was very flavourful to the point that some people who have low sodium tolerances may find it a tad salty.  I really liked how big the portion was!  Yum. 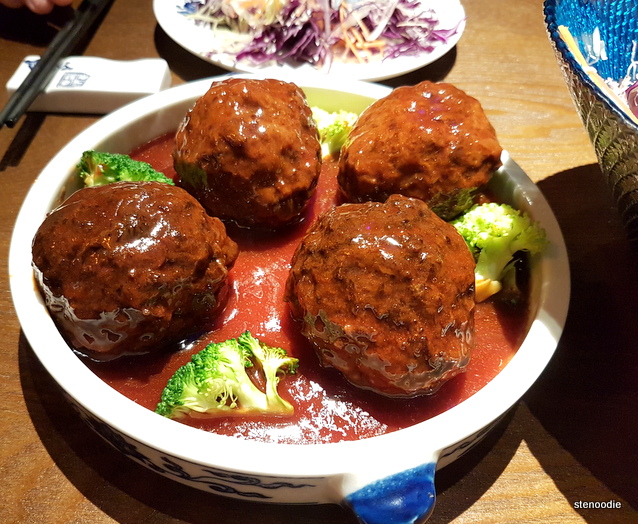 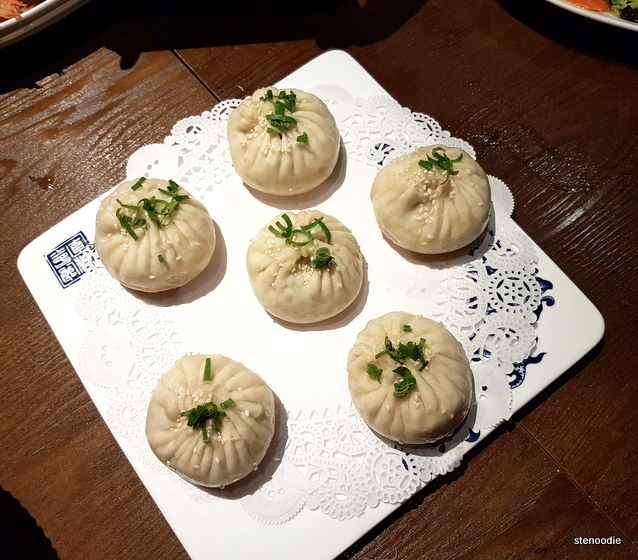 The Pan Fried Pork Buns tasted as good as it looked.  There were six of them and it was pan fried enough on the bottom so that you could see the pan fry marks.  Again, this is definitely a dish you need to eat when it’s hot (so my fellow foodie friends, don’t take so long to take photos of it that it becomes cold :P).  I loved these pork buns!  It was really soft on the outside and juicy on the inside.  There was soup from the pork was still inside the bun which made it so juicy and delicious.  I highly recommend this dish! 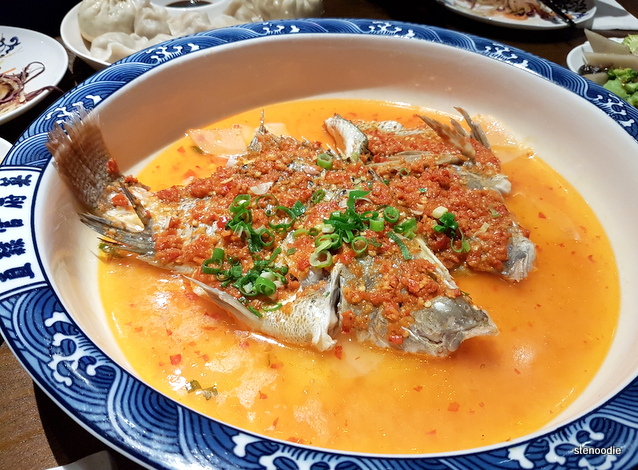 The Steamed Tilapia Fish with Chopped Bell Chili was another amazing dish that we received.  It was a huge, huge, heavy deep plate where the tilapia had already been halved so that you didn’t have to flip the whole fish around for the other side of the meat.  It was covered in green onions and chopped bell chilis.  It was really a sight to behold!  The steamed tilapia fish was quite tender and the bell chilis provided the heat and spice to the dish.  If you don’t like spice, this dish may not be for you.  Otherwise, it was a really substantial fish dish to eat and share. 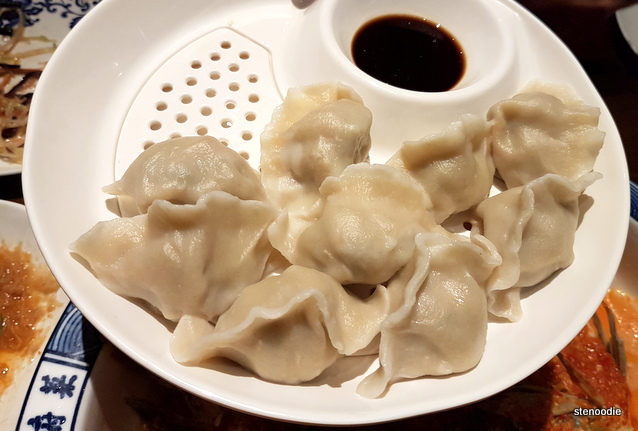 The Pork Chives Dumplings were also really good.  I liked how they were served on a plate with dedicated holes in order for the oil from the dumplings to escape — this way, the dumplings wouldn’t be sitting in its own oil and get soggy.  What a great intention of a plate!  As simple as this dish was, the pan fried pork chives dumplings were tender on the inside, its dumpling skin wasn’t too thick or heavy, and overall a really tasty dumpling.  Yummy! 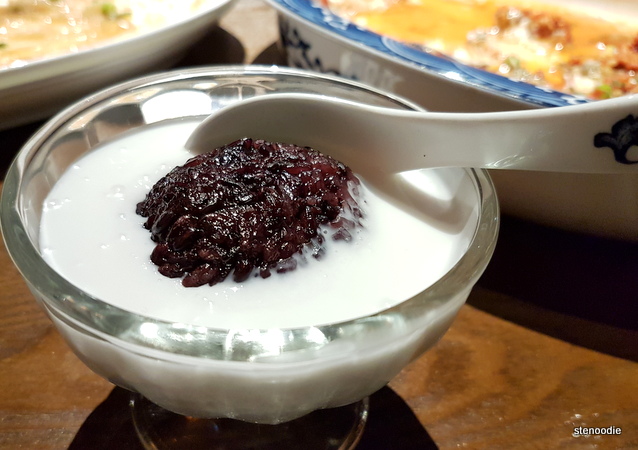 Lastly, we ended the tasting menu dishes with the Coconut Milk with Sweet Rice.  Not everyone was a fan of this dessert because the black glutinous rice wasn’t sweet enough or the coconut milk was thought to be too oily.  I thought that this dessert was all right.  After all of the savory courses of food, this helped to calm down my taste buds with something simple and fresh.  However, I do agree that if the black glutinous rice had a hint of sweetness in it like it usually does, it would have brought up the points for this dessert.

As I mentioned, we ordered some extra dishes off of the regular menu after the tasting menu because we wanted to try out more of the food.

The Fried Salt & Pepper Calamari contained huge thick chunks of calamari that were deep fried with a rather thick batter with green and red peppers and onions.  While the calamari was very fresh and not chewy or rough at all, I found that the batter was a little too much and oily.  When I asked about the oiliness, I was told that this was how the northern style of calamari is prepared. 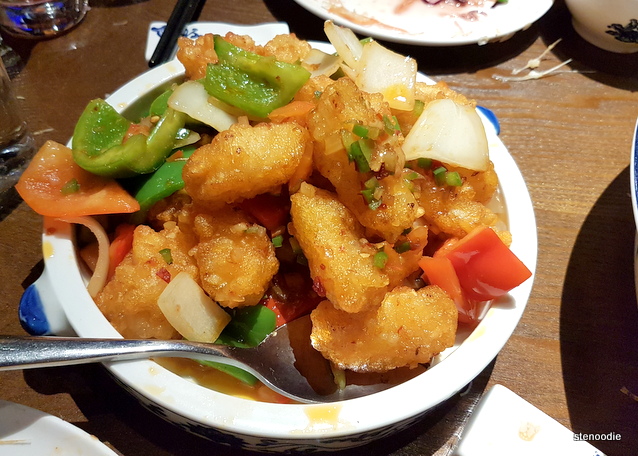 We ordered the Signature Handmade Pancake because its picture on the menu looked so appealing.  It turned out to be so delicious even though it definitely was something simple.  The pancake was made with dough, green onions, and that was pretty much it.  It was seasoned too and when you pulled it apart, it was so flaky and delicious.  I recommend this  dish as well. 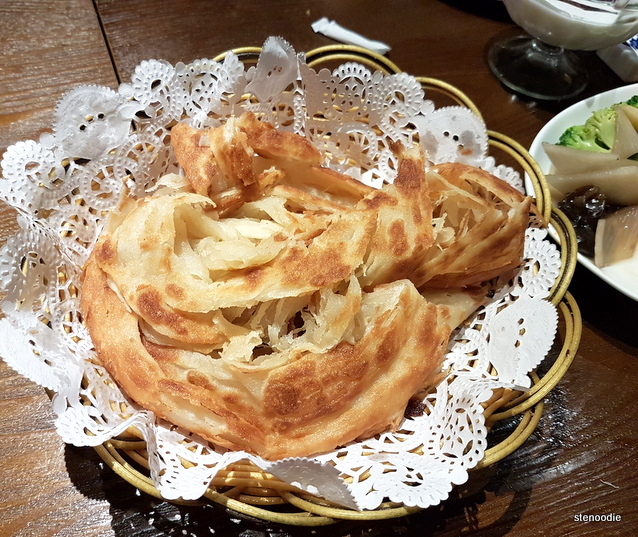 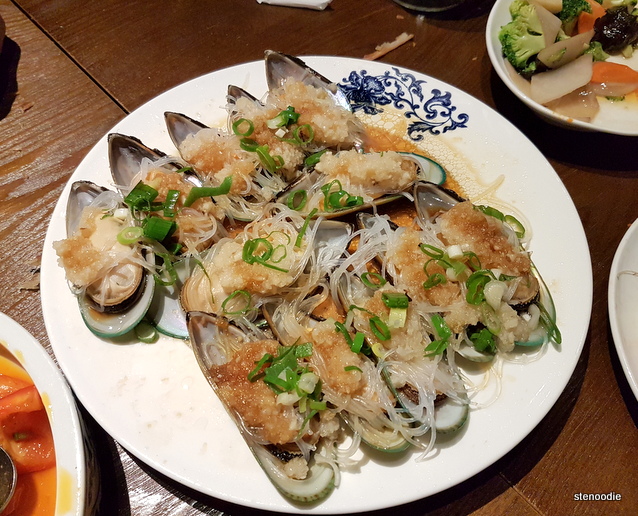 Steamed Mussels with Garlic and Vermicelli. $15.99

We ordered the Steamed Mussels with Garlic and Vermicelli.  This turned out to be really delicious as well.  We didn’t know and had ordered the Stir Fried Mussels at first instead because of a typo in the menu but the owner was gladly able to provide the correct dish for us after we let him know about the mistake.  Again, I really liked the vermicelli in the dish.  The mussels were fresh as well.

We tried another dessert which was the Blueberry Mashed Chinese Yam.  This was definitely one of the more unique Chinese desserts I’ve tried.  It looked like swirls of mashed potato with blueberry sauce on it.  It was actually mashed Chinese yam which gave it a slight sweet taste.  I liked the blueberry sauce on this the most.  It looked good too. 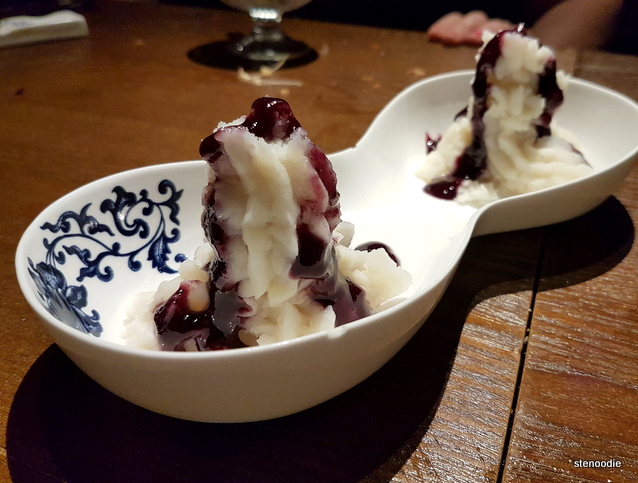 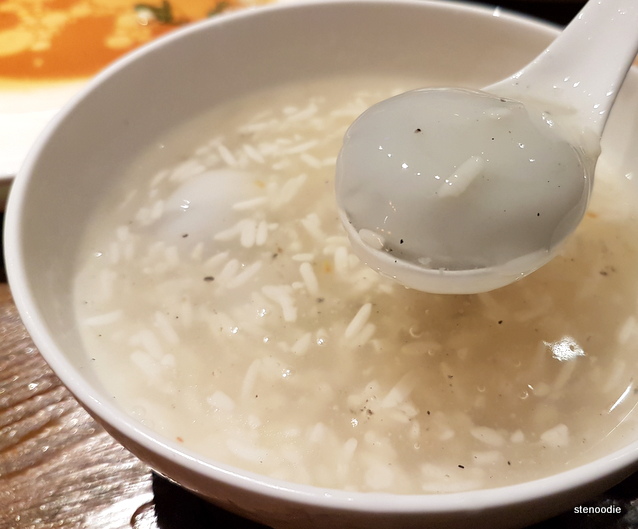 The final dish of the night was yet another dessert; our third one!  (We were so lucky to try so many!)  We tried the Rice Dumpling in Osmanthus Sauce & Fermented Rice Wine.  I found this to be a very unique dessert as well.  I have had rice dumplings before; they’re kind of like mochi with a filling inside, usually sesame.  Indeed, the rice dumpling in this dessert had black sesame inside of it that was gooey and delicious.  However, the sauce that it was in contained fermented rice wine.  Nobody else at the table tasted the rice wine in the sauce as much as I did.  I actually quite liked it and after a few sips of it, I felt a little tipsy too.  What a very interesting dessert! 🙂

We were all really full from all the food and very grateful for the experience to dine at 98 Aroma.  We were able to try so many dishes too.  Thank you again to 98 Aroma and their staff for serving us! 🙂 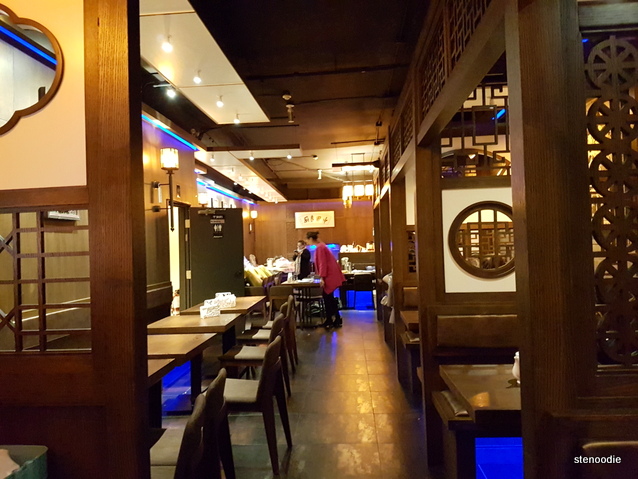 Lots of seating at 98 Aroma

If you are in the mood for some good fine Chinese cuisine and are in the Chinatown area of Toronto, hop on by to 98 Aroma.  You will find the atmosphere inviting and comfortable, the food delicious, and your belly quite satisfied! 🙂 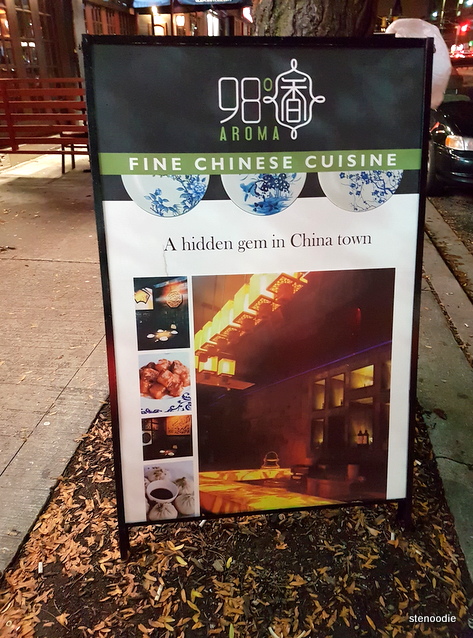 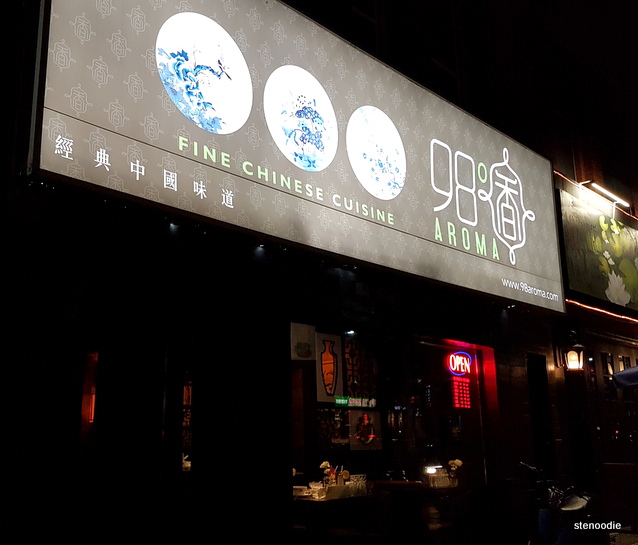 Its storefront on Spadina

FTC Disclaimer:  Although 98 Aroma invited me to a complimentary tasting to review their restaurant, the opinions expressed here represent my own and not those of the restaurant.