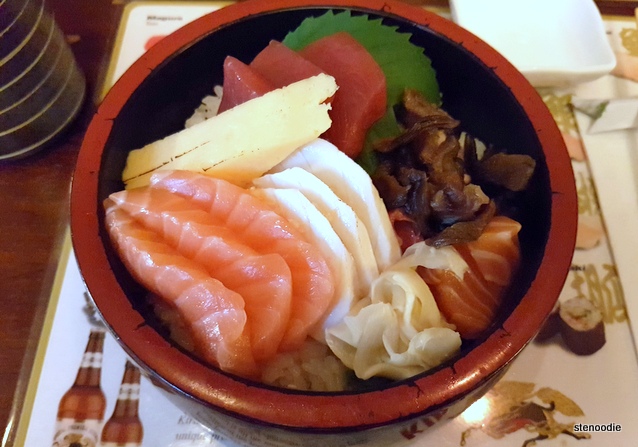 Disclaimer:  This is a blog post based on my own experience at Japango — clearly, this was not a good experience for me to be including this disclaimer but I am warning readers right now before you read the entire post because some people get easily offended and sensitive over “negative” reviews.  (Just a reminder, a review — good or bad — is someone’s personal experience.  People need to stop being so hyper-sensitive when they read something they don’t agree with.)

So, my two friends and I were meeting up at Japango this past Tuesday on November 1.  We agreed on meeting up at 5:30 p.m. for dinner at this Japanese restaurant known for fresh sashimi and sushi located on 122 Elizabeth Street near Dundas and Bay Street in downtown Toronto.  I was very excited about coming to Japango because I had heard lots of positive things about it!  I heard that not only were their sushi and sashimi great but also that they had a higher price point than most Japanese restaurants.  I was ready for it and anticipated both aspects. 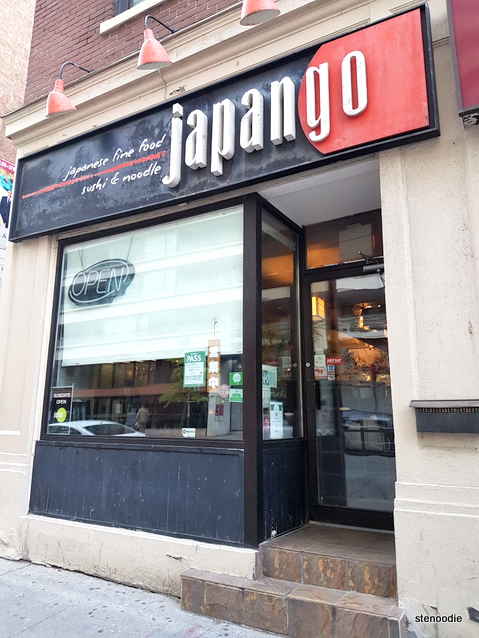 Japango storefront — smaller than I expected

When I walked to 122 Elizabeth Street and found the storefront of Japango, I was initially very surprised to find that it was a much smaller shop than I expected.  Having hearing so much about it, I thought that it would be a medium-sized restaurant.  When I walked up the two steps to the doors and opened it, the entire dining space could be seen in one glance.  It was a mom-and-pop type of restaurant. 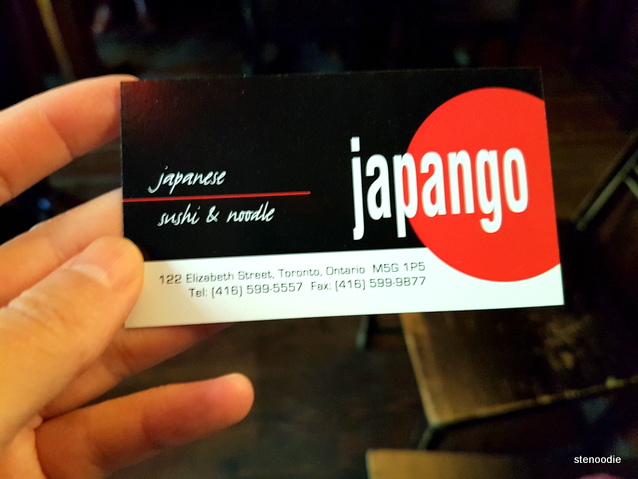 Took a photo of their business card while waiting

The dining area comprised of a few tables along the wall and the sushi bar located on the right side of the restaurant.  It was already very squishy at the entrance-way and it didn’t help that there happened to be three people ordering take-out and waiting for their food.  Having just come from work, I had my roll-away bag with me and after one of the patrons received her take-out box of food, I informed the man (he looked like he was the owner so I’ll refer to him as such for the rest of this post) for a table of three.  [He was the sole server for the restaurant that night; there were no other wait staff.]

He told me to inform him when my entire party was present in order for me to receive the table.  That was fine; it made sense since their restaurant was so tiny and this is not the first restaurant to request that your entire party is present before the table is given.  I waited at the entrance-way for my friends to arrive.  At that time, he also told me quite bluntly to move my roll-away bag out of the way since it was obstructing the aisle.  It wasn’t a problem for me to move my bag, but I already detected the slight “off”-sounding tone in his request. 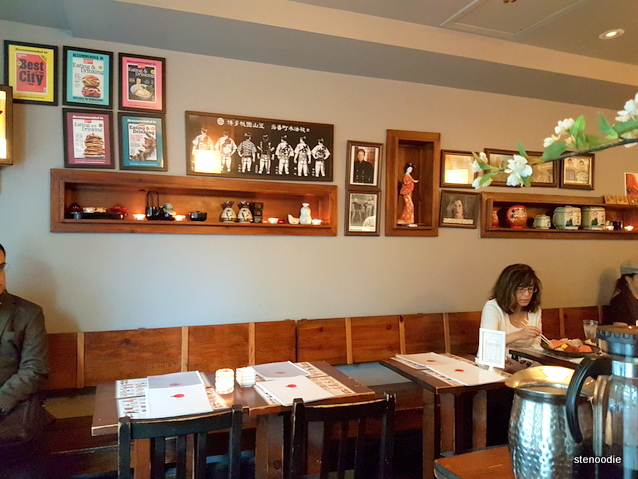 I was really glad when Holly and Joyce arrived in a few minutes’ time because it seemed like more people were coming in and since the restaurant had such limited seating, it could have been possible that we wouldn’t have received a table if we had to wait any longer.

The table that we sat at was for a table of four: two seats were against the wall and two seats were chairs (look at the photo that I happened to take that shows the exact table we were sitting at).  Holly and Joyce sat inside on the inside seats and I took the seat to the first seat to the left of the table.  The owner came up to us and told me I had to sit on the seat to the right hand side of the table because that was where he had placed the place mat and menu — and he said something about it being the proper spot to sit at since we were a party of three.  Um… what?  Joyce and I exchanged a look to show our confusion at the instruction.  I have never received such an order from a staff at a restaurant before.  Why can’t I sit whenever I wanted when there were four seats?  It didn’t make any sense at all.  I was appalled at the time but didn’t make a big fuss out of it and shifted to the “proper” seat to the right because I was there to enjoy dinner with my two friends that I hadn’t seen in a long time and not to quarrel about something so crass. 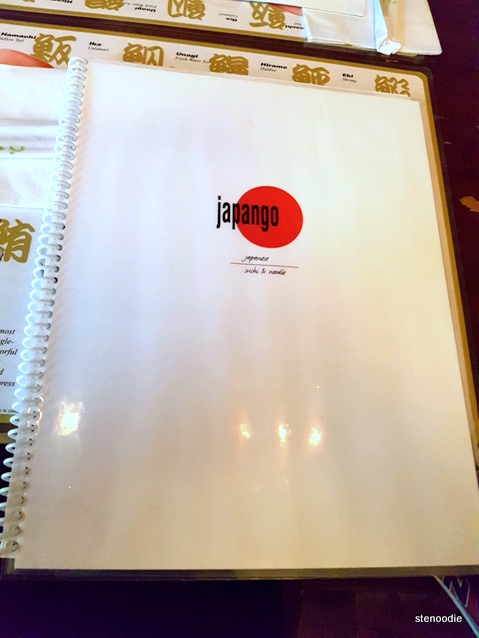 Holly and I chose the Chirashi while Joyce ordered the Crunchy Spicy Salmon Roll and the Dragon Roll.  The Chirashi came with a salad and miso soup; quite typical for Japanese restaurants.  I liked how the salad was crisp and its dressing was light.  The miso soup was hot enough and decent. 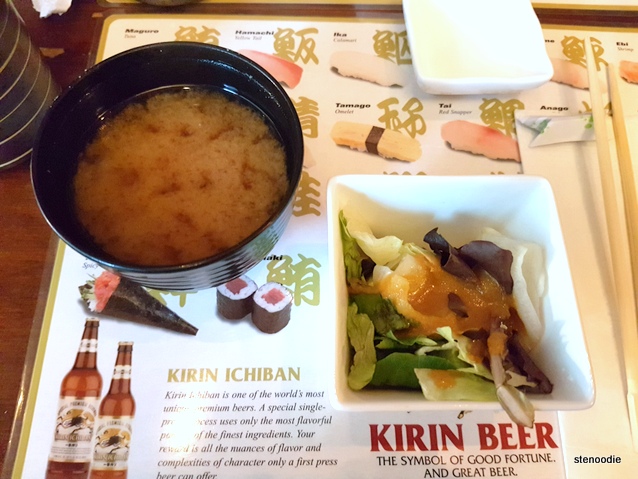 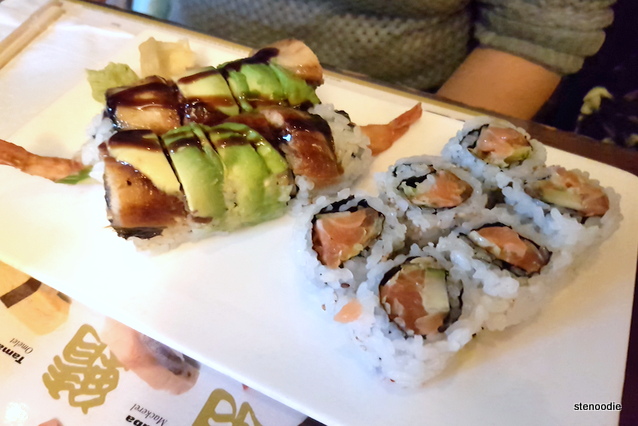 The Chirashi was amazing!  It was packed to the brim with lots of fresh sashimi of different types and a layer of warm sushi rice on the bottom.  I really enjoyed this!  Eating this, I could tell why people rave about Japango. 🙂  The sashimi was all so fresh!  In particular, the salmon sashimi was cut in thick slices and was very soft and delicious.  The rest of the sashimi — tuna, scallop, tamago — were all in large pieces too and tasted very good.  The sushi rice, while sounding normal, was actually incredibly delicious and seasoned so well.  I loved it!  The Chirashi was a large portion and definitely worth the $21. 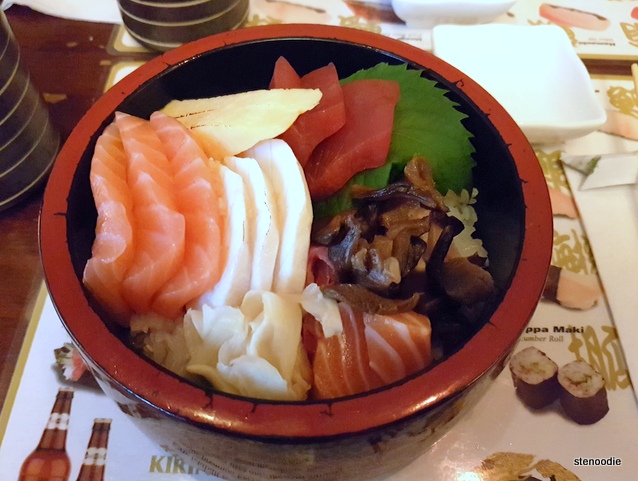 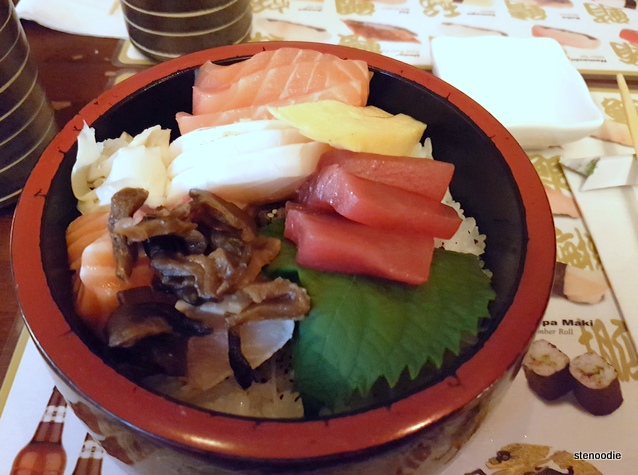 Here comes the disappointing and ridiculous part:  As I mentioned, we were initially seated at around 5:35 p.m. (the timestamp on my photos show this).  By 6:25 p.m., not even an hour into the dinner, the owner came over and asked us if we wanted our bills paid separately or together.  We answered for the bills to be paid separately and then he brought the bills over and put them on our table.  At this point, Holly and Joyce had finished their food already but I was still in the middle of my meal — I had a quarter of my food left to go.  Again, I have to stress that it was not even an hour into our total time dining in when he came over and said we had to pay right away because there were reservations for other customers coming in that needed our table.  Um, WTF.  I wasn’t even done eating my food!  Being the quiet person that I am and not liking to make a big fuss out of things in public, I hurriedly gobbled down the rest of the sashimi that was in my dish and paid.  I hate wasting food but at that moment, both Holly and Joyce had already paid and I didn’t want to keep everyone waiting especially when I knew that the owner was already an unpleasant person.  (In hindsight, if Holly and Joyce hadn’t paid yet and I kept eating until I finished the rest of my food, we could have forced a longer stay because we as the customer certainly has the option to do so.)  Anyway, that was ridiculously rude of the man to make us leave like that (no other tables around us were forced to leave) and the service from this owner during our entire visit was exceptionally unprofessional and unwarranted.  I don’t know what his problem was because I felt like I wasn’t valued as a customer AT ALL.  As someone who has reviewed restaurants for over three years and from anyone who eats at restaurants, you know that that is NOT the way you treat your customers.

I almost wanted to leave zero tip, but I don’t usually reflect my displeasure right away at a restaurant like that (and plus, I didn’t want to deal with any other unnecessary interactions with this owner anymore that night), so I paid what I had to and then we left.

Even after we left, Joyce and I commented on the absurd service that we received that night at Japango.  Holly brought up the unpleasant tone of the owner’s voice too when Joyce was ordering and inquiring about the sushi rolls.  His tone was of a very pompous and holier-than-thou tone and attitude.  Again, my opinion.  Sometimes, it’s not what you say but what you feel from someone that makes the experience a negative one.  This owner made me feel like an undervalued guest.  And why should I subject myself to that as a customer who is paying for the food and service?  (We are not talking about fast-food here where service is not part of the dining experience — this was a sit-down restaurant.)

Needless to say, I was very, very disappointed with my first visit to Japango.  All pleasant thoughts and impressions of this restaurant were down the drain.  Despite being served delicious, high-quality sashimi at a much-talked-about restaurant, I really can’t see myself coming back any time soon.  I wouldn’t want to support a restaurant that doesn’t care about its guests in such a blatant manner.