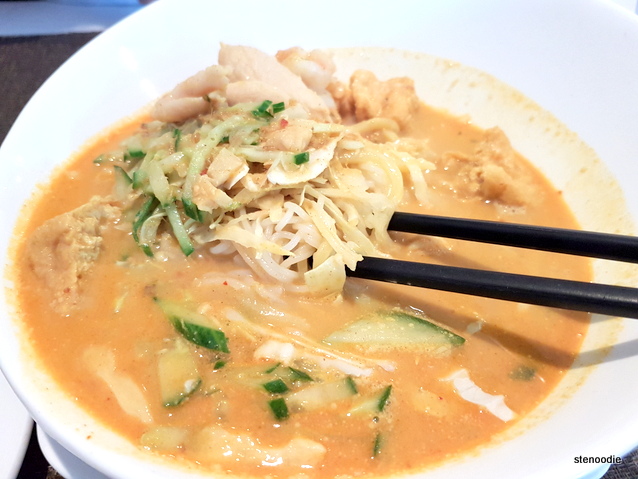 Bali Restaurant is a restaurant serving “Southeast Asian Cuisine” in Richmond Hill.  It is located on 10 East Wilmot Street close to Leslie Street and Highway 7.  I had passed by this plaza while driving on Leslie many times before and noticed its chic storefront and always wanted to try it out — plus, Southeast Asian food is always a nice food adventure due to its spices and strong flavours.  Thus, my mom and I stopped by here for a late lunch after one of my court reporting jobs on a weekday. 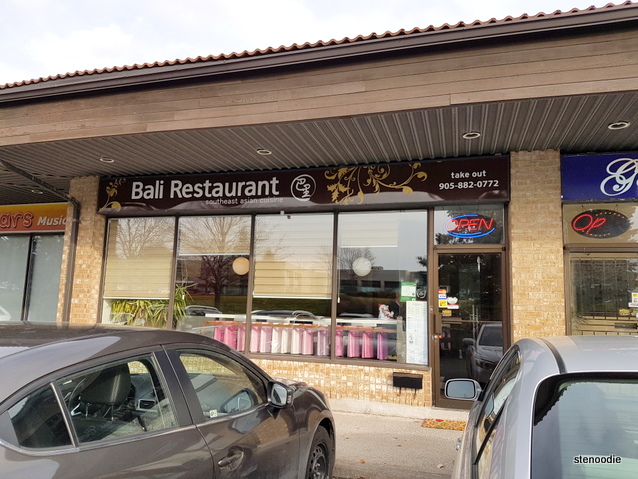 We entered the restaurant just before 2 p.m. and there were an influx of middle-aged guests who were just leaving — they must have been dining here for lunch.  Once inside, we were seated at one of the booths and served a really nice jasmine green tea and the lunch menus.  The lunch menu contained a combination of rice and noodle dishes, all having to do with Southeast Asian stylings.  However, the interior of the restaurant was a very Chinese style restaurant with minimal effort put into the decor, white walls, and the staff appeared Chinese too (they spoke Cantonese).  The items on the lunch menu were served with either a drink or soup/side dish too.

We ordered two item items to share.  The items on the menu were priced higher than they probably should have been.  (For example, how is it that their “Myanmar Style Noodle with Fish Broth” — which we were told has nothing in it except fish broth and plain noodles — costs $6.99?  I could get an actual fish broth soup with fish balls and fried fish skin at another restaurant for less than that price!) 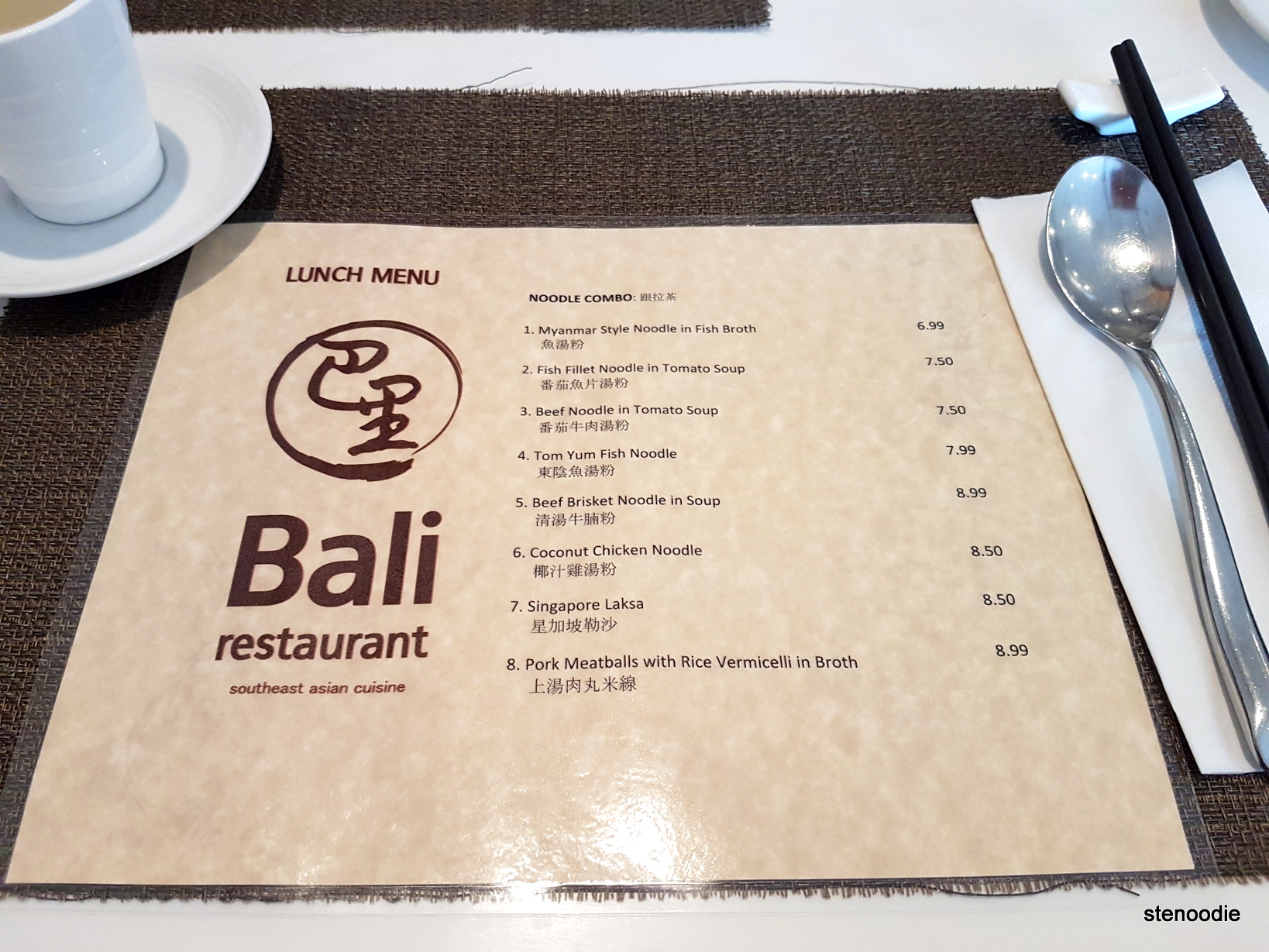 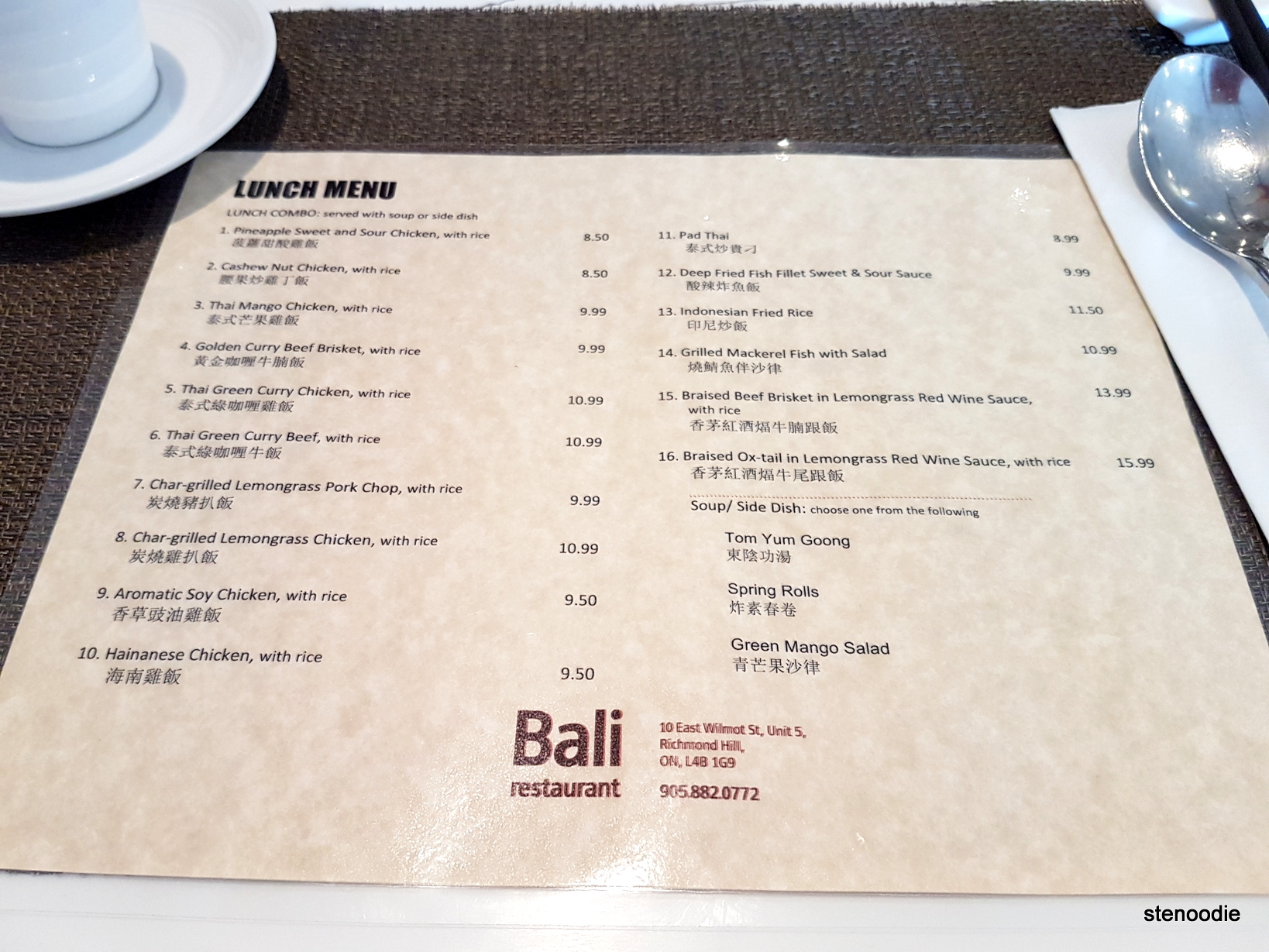 A Green Mango Salad arrived first as a side dish.  The portion of this was kind of pitiful (bad presentation too) and the mango salad was really sour.  They topped the mango slices with some salt to balance the sourness of the salad but I have had much better mango salads before. 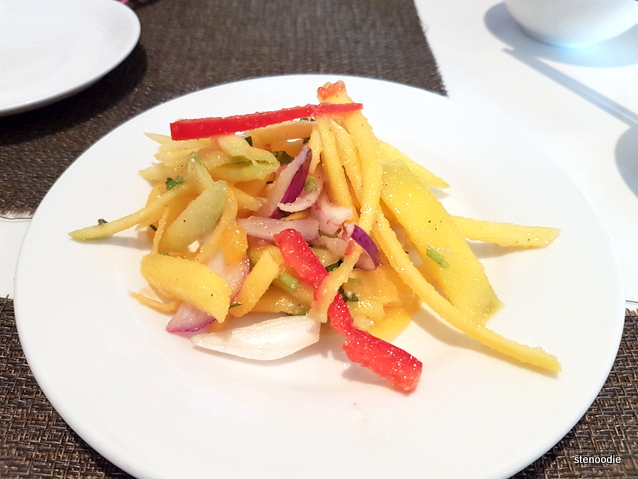 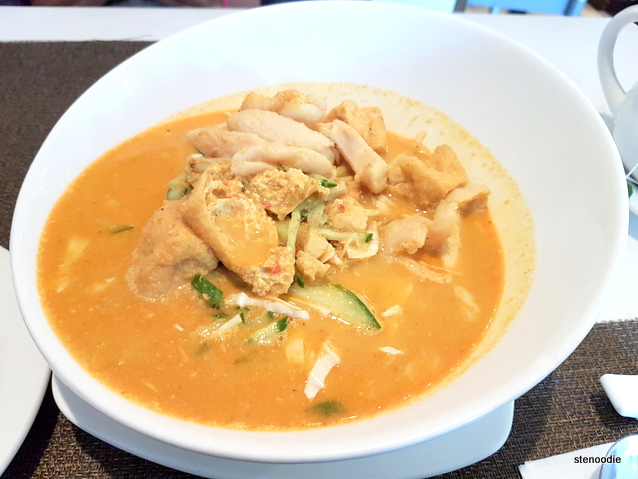 The Singapore Laksa arrived in a tilted bowl, which looked nice, but it meant that there were fewer contents in it because if there were a lot, it would have spilled out on the side.  There were two types of noodles in the laksa — a vemicelli-type and a yellow thick noodle.  This wasn’t authentic Singapore Laksa.  The broth was creamy but wasn’t even spicy enough.  There was one shrimp, three pieces of fish, some chicken chunks, and tofu puffs in total in the bowl.  The soup broth also wasn’t hot enough — tasted lukewarm.  This was just not a good “Singapore Laksa” at all.  It was like a watered down and Chinese-style version of what the real thing should have been. 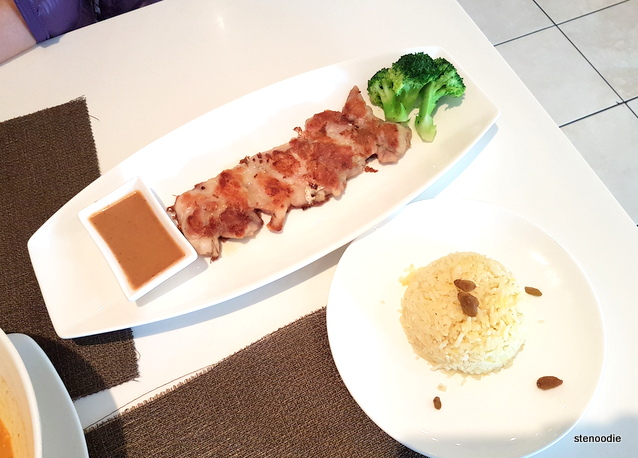 They ran out of the “Aromatic Soy Chicken with rice” so I ordered the “Char-grilled Lemongrass Chicken” instead.  The chicken was served separately from the rice and I actually really liked the Char-grilled lemongrass chicken.  It was very meaty, moist, tender, and crispy on its grilled parts.  It went well with the watery peanut sauce too.  The rice was slightly flavoured and had some dried fruit in it as well.  This item tasted decent but for $10.99, I’m not sure if it was really worth it. 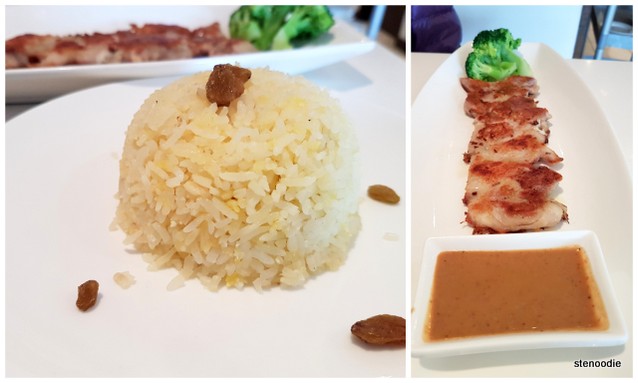 The chicken was indeed very good though 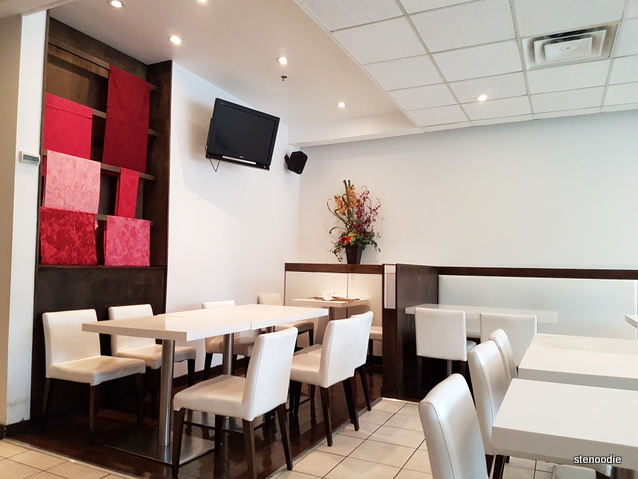 Really plain interior of Bali Restaurant. It was more pronounced when we were in there because it was so empty and silent

All in all, I had a bad impression of Bali Restaurant for my first visit.  Their food is as not cheap as it could be (perhaps because they are located in Richmond Hill?), not authentic in my eyes, and not a good dining experience — it was really awkward to dine in there because by the time we were eating, we were one of three other tables remaining and the restaurant had no music or any sort of background sounds playing.  Thus, we were all eating in silence.  All I could hear during the meal were the staff washing dishes in the back or our utensils moving around.. and everyone could hear our conversations (the two other tables were single-parties so they obviously were eating solo in silence too).  It was quite awkward.  Perhaps this was a bad first visit to Bali Restaurant and others have enjoyed better ones…

(On the plus side, the service by the staff was really attentive and friendly.)