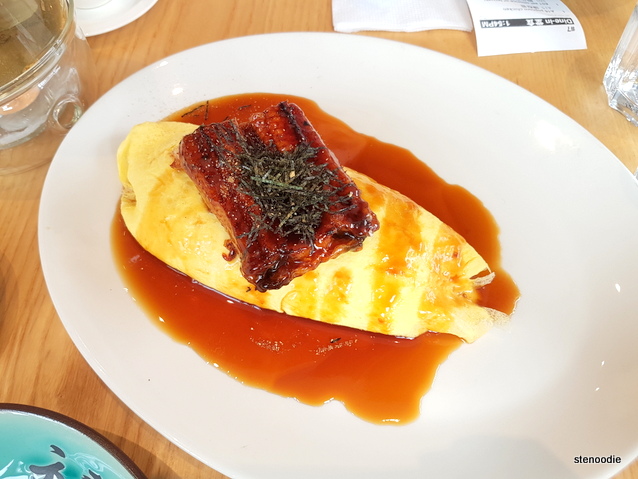 Ever since I was invited to attend the Media Event (and wasn’t able to go) last year, I have wanted to visit Petit Potato for its omurice and towering toast desserts.  I finally had the chance to try it out with Ken this weekend just before we headed to the Evergreen Brickworks for a quick hike and stroll.

Even arriving on a Saturday at 1:45 p.m., the restaurant was packed and bustling with lots of people dining in for lunch.  Petit Potato was really nicely designed inside with these hanging yellow light bulbs and an open space with plenty of tables and booths for two-seaters or up to ten-seaters.  It was a really modern space for some Japanese and Taiwanese Asian fusion food. 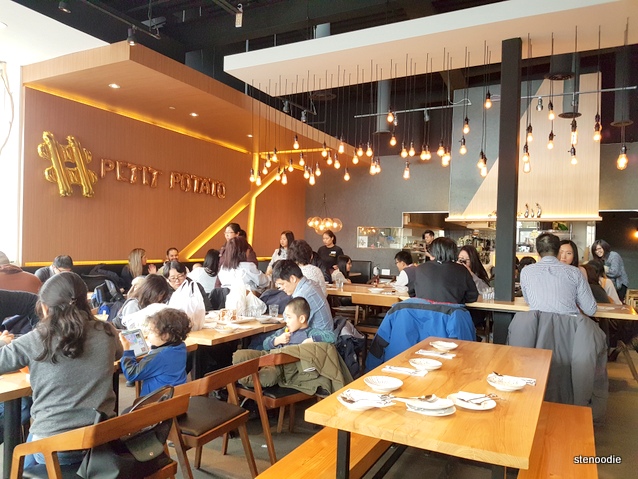 Their utensils were definitely a talking point.  The first time I had seen these were in Hong Kong at a similar Taiwanese restaurant called Teawood that also served massive toast desserts. 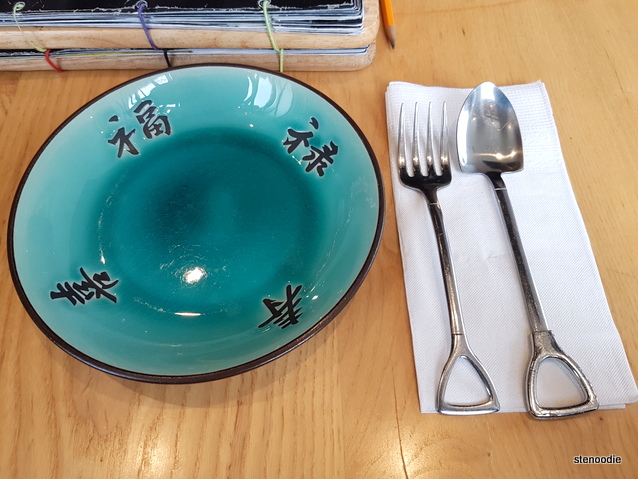 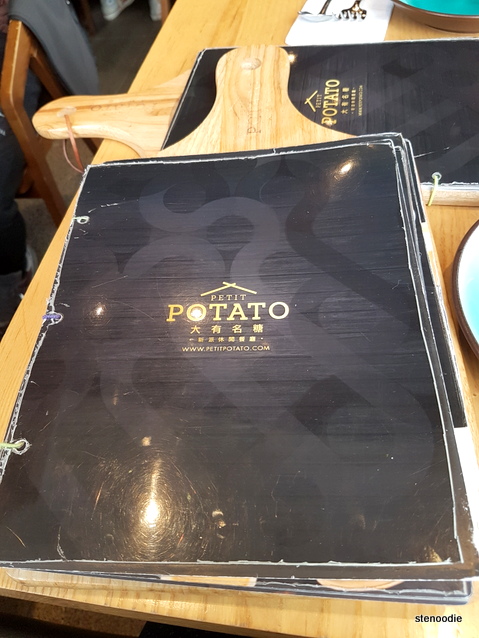 Menu rests on a bread pan

We pretty much knew what we wanted to order once we sat down and looked at the menu.  We ordered the Eel Omurice with Teriyaki Sauce, Popcorn Chicken, and the Mango Special Golden Toast.  Ken also ordered the Ginseng Tea with Honey which arrived almost right away.  It was a really cute transparent teapot with a tealight under it that kept it warm and two small tea cups.  The Ginseng Tea actually had ginseng stems in it and tasted light but flavourful! 😀 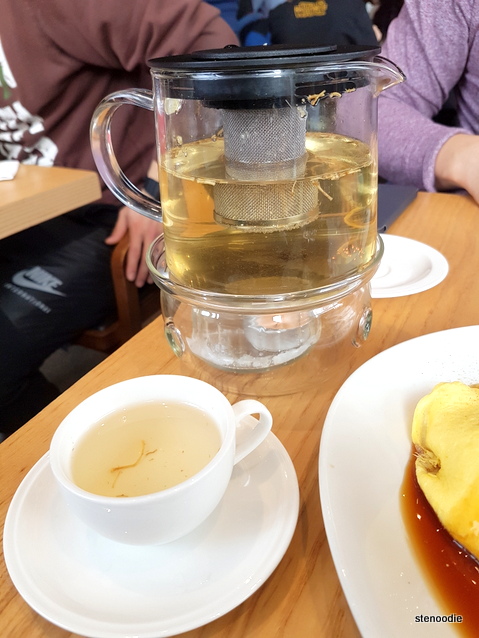 The Popcorn Chicken arrived after the Eel Omurice with Teriyaki Sauce.  I really enjoyed the crispy and crunchy popcorn chicken morsels that were just the right size.  I think the salt and pepper flavour could have been even more heavy handed but it was still very decent and delicious. 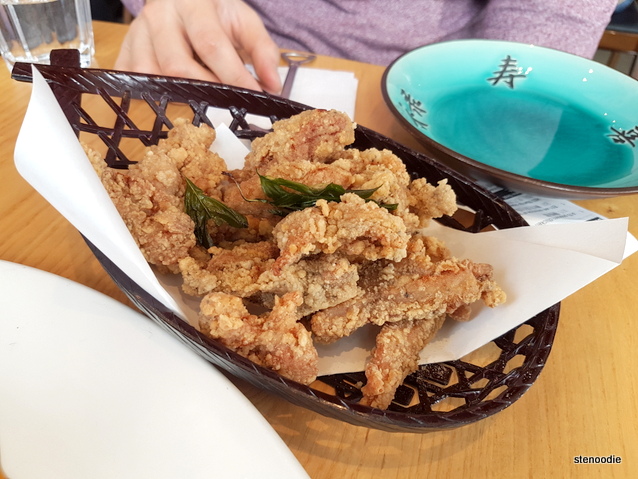 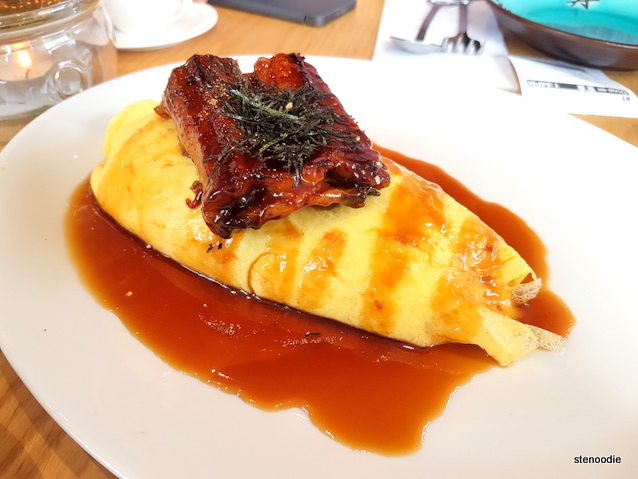 The Eel Omurice with Teriyaki Sauce was a sight to behold with the eel fillet perching above the omurice (omelette wrapped around tomato fried rice).  The most important thing was that not only was it good looking but it tasted fantastic too.  I was especially hungry that day so I gobbled up my portion really quickly but it was actually truly delicious.  The omelette part was so smooth and fluffy — just the way I like eating eggs.  The tomato fried rice was perfect in taste and texture and the saucy teriyaki meaty eel just perfected the dish.  I would totally come back to eat this again (and also to try their other toppings of omurice like the pork cutlet omurice hehe).

Since the Special French Honey Golden Toast Series had a prep time of 30 minutes, it was perfect that once we finished our main dishes, we had some moments to rest before the massive mountain of dessert arrived.  I was actually surprised that this infamous Mango Special Golden Toast looked smaller in person than in the photos I’ve seen on instagram — food photographers are so good at making food look mesmerizing and bigger than life. 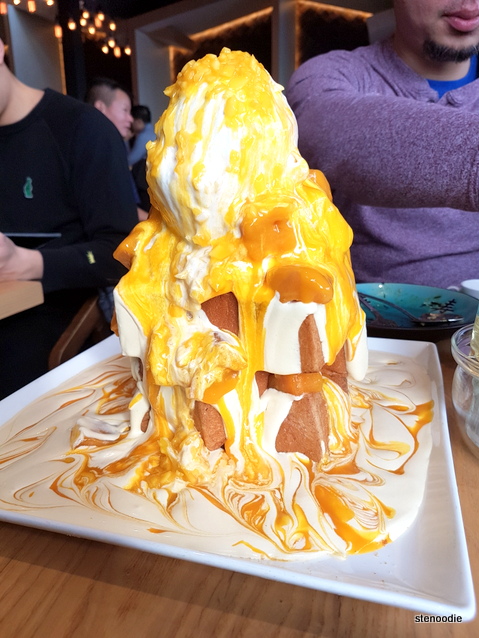 This special Mango Special Golden Toast dessert was indeed special and can definitely feed more than 2 or 3 people.  The thick toasts were cut out of their crusts and made into a tower foundation starting from the bottom to fill out each layer.  There were several mango chunks and lots of condensed milk and mango sauce that dripped beautifully and artfully from the top of the ‘mountain’ to the bottom where there was an overflow of sauce and ice cream — a sphere of vanilla ice cream with some smaller mango chunks at the top too.  It was definitely beautiful and also tasted good!  I really enjoyed the chewy and soft thick toast that accompanied the dessert; it wasn’t hard or dry at all and I really appreciated that. ^_^  I would totally order this again too and also try out their other flavours and the new flavours once they come out with them (Oreo, matcha, etc.). 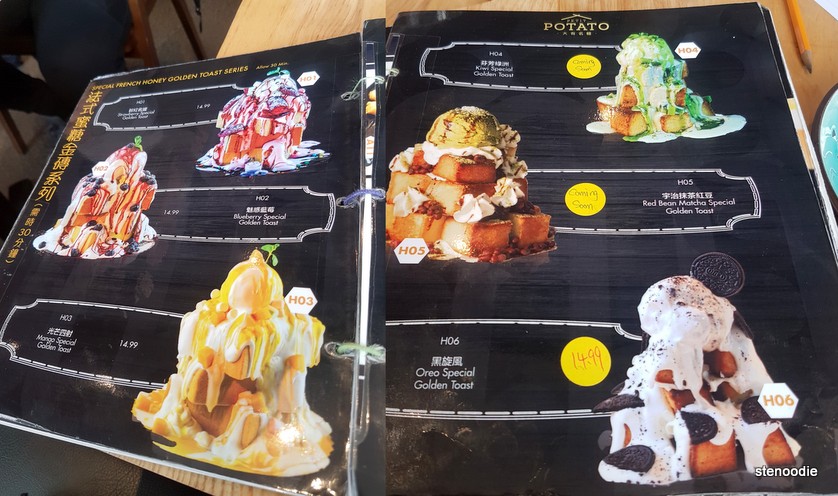 I thoroughly enjoyed my visit to Petit Potato and can totally appreciate the publicity and popularity surrounding them now.  They also have lunch combos that are reasonable and feature their omurice dishes too.  Yum yum! 😀 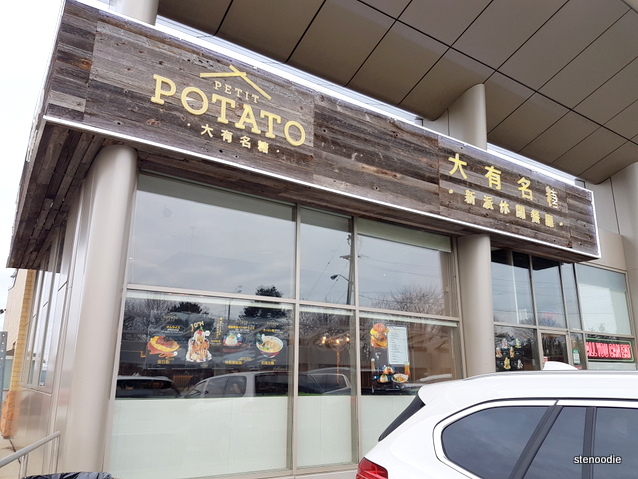 Their closest intersection is Leslie and Finch in North York