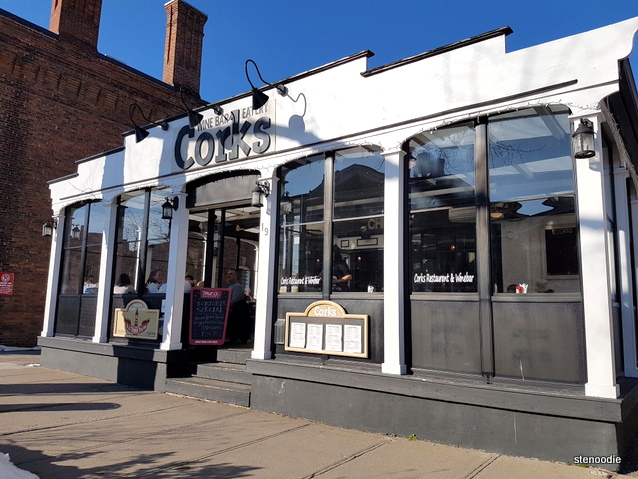 Before we left Niagara-on-the-Lake, we had a late lunch/early dinner at Corks Winebar & Eatery.  The storefront of this restaurant already piqued my interest when we were strolling down Queen Street in this little tourist town because it looked so modern compared to the other storefronts and inviting.  Thus, we walked in without hesitation (or even looking at the menu) to try out their food.

We were given a choice of sitting outside on their covered porch or the inside.  Given that it was winter yet the covered porch seemed so inviting and bright (it was kept warm and sunny under the greenhouse-like shielding), we took a four-seater there.  The food at Corks Winebar & Eatery included a lot of different varieties including pub food, seafood, burgers, and apparently they were most well-known for their fish and chips.  (The covered porch also reminded me immediately of the porch that I dined at during a meet in Paris!) 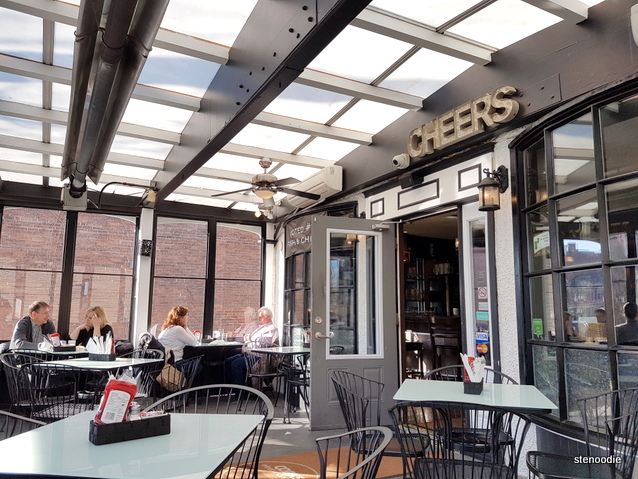 We decided to share three appetizers since none of the mains appealed to us and this way, we were able to try more items by sharing! 😀  We chose the Fresh P.E.I Mussels, Crab Cakes, and Pan Fried Brie.  Our server was very friendly and cheerful. 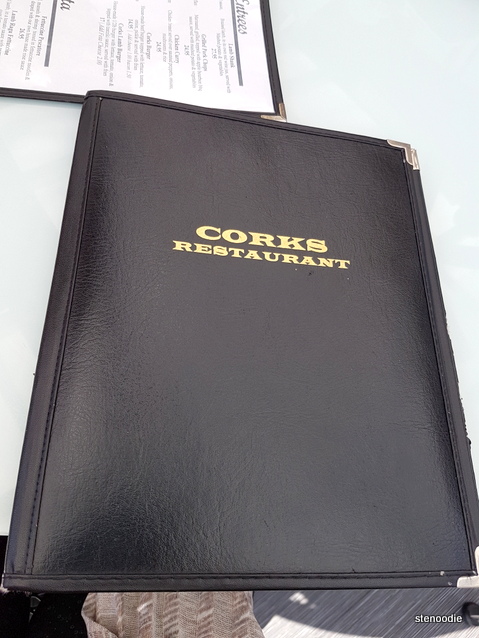 All the appetizers arrived at the same time.  I liked all of them!  Each one was prepared really well and the portions were very reasonable. 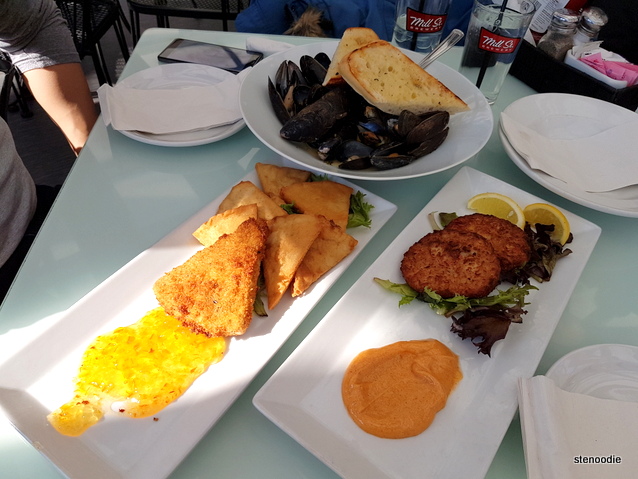 Our spread of food bathing in the sunlight 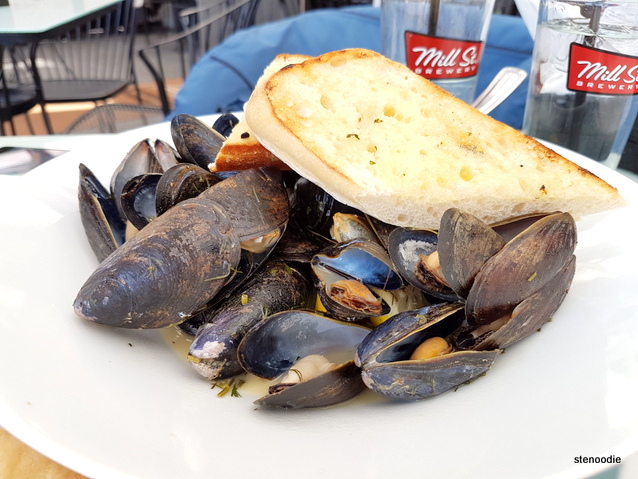 The white wine garlic sauce for the 1 pound of steamed Fresh P.E.I Mussels was done so, so well!  The sauce was a strong blend of white wine garlic sauce which made eating it with the garlic bread and the fresh mussels incredibly delicious.  This may have been one of the best plates of mussels I’ve ever had.  It was something about the sauce that tied all the flavours together.  All of the mussel meat was intact or found within the dish as well — as in none were missing. 😛

The Crab Cakes were served with their chipotle mayonnaise with some greens.  The crab cakes were made using real crab meat as well as imitation crab meat.  I really enjoyed this.  I love crab cakes. 😀 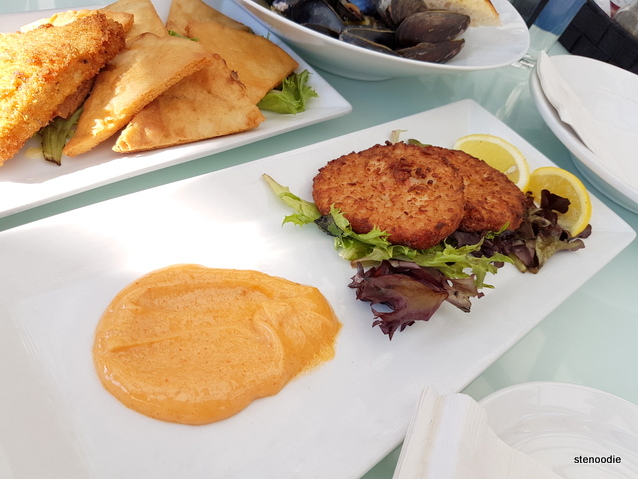 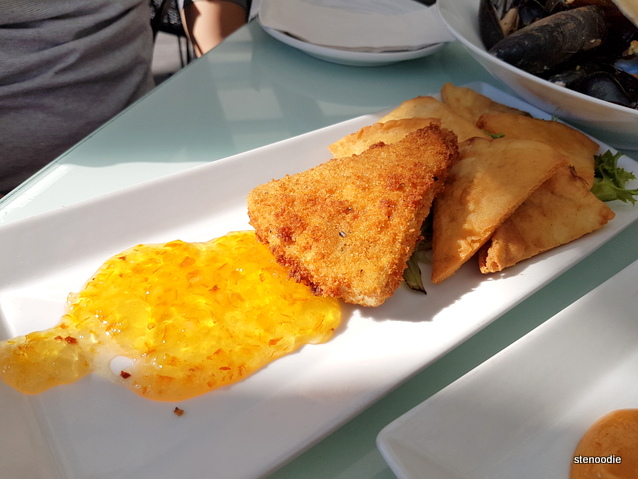 The Pan Fried Brie was also really good!  It was served with orange chutney and crostini.  The pan fried piece of brie was entirely covered in a light batter and it wasn’t until you cut it open that the soft, gooey, melted brie slid out like a waterfall.  It was so good!  The warm brie was melted perfectly and it went really well with the orange chutney and crostini.  On its own, the triangular-shaped crostinis were really hard in texture, but once you combined the brie with it, I felt that it was decent.  Mmm, the deliciousness of the brie just overshadowed everything. 😀 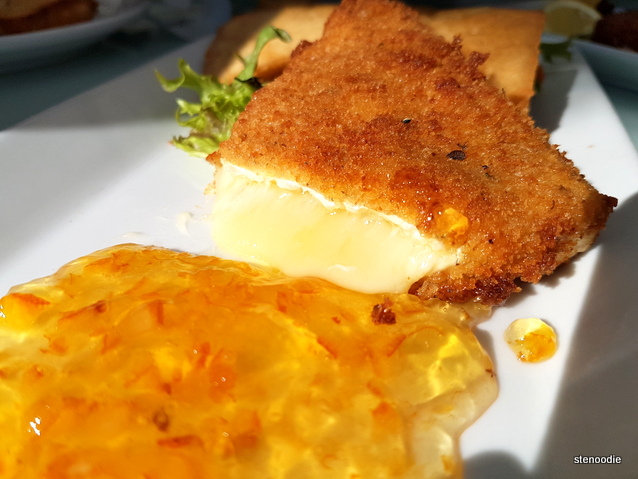 Within an hour, we were done our meal and we headed out and on our way.  It was a really delicious and solid meal at Corks Winebar & Eatery.  I’m quite sure it is a relatively new restaurant too since I hadn’t noticed it before in my previous trips to Niagara-on-the-Lake (or maybe not haha).  It’s definitely a restaurant to check out for good food if you want lots of variety. 😀