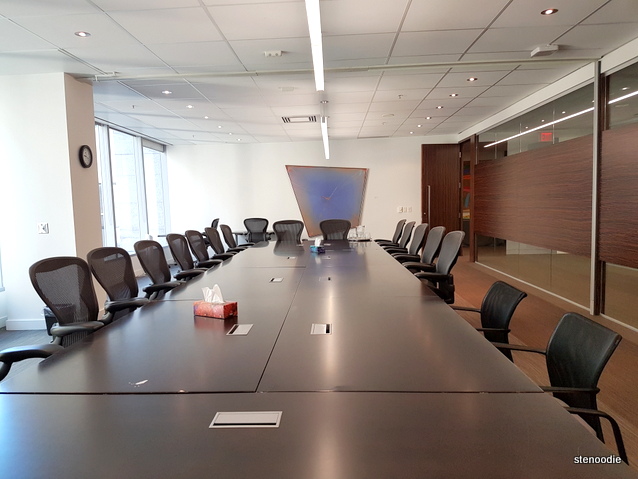 On Friday, I had an examination at the office.  For the first time, I was reporting in one of their biggest rooms that they had even though the number of scheduled number of people was slated to be 4 to 5.  Four people showed up in the end.  It was probably because it was the Friday before the long weekend and since there weren’t many jobs that day, they decided to put them in the big room (and also perhaps because they were returning clients or something).

The big room can actually fit up to 20 people as we had one of our CaseCat training workshops there too.

It felt really cool to be reporting in that big room — I felt rather important haha.  In addition to the outlets being accessible from the desk, there was one at the base of my feet too (which made me extra careful on where to put my feet and swivel chair feet when sitting down). 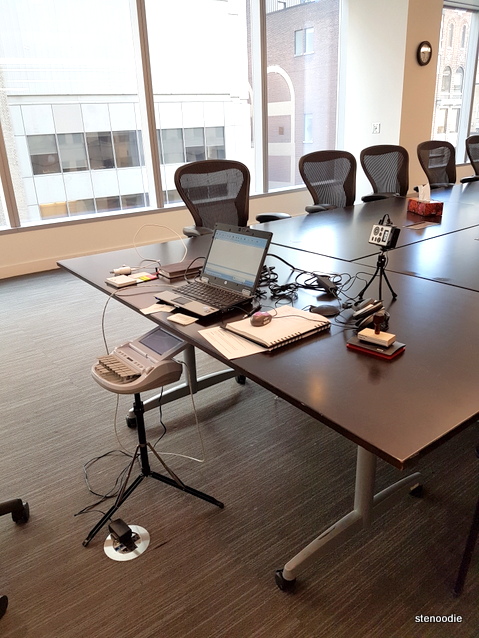 The second party didn’t arrive until 20 minutes after the start time so I had plenty of time to get ready.  Once they were ready though, we began without much fanfare.

Within 30 minutes or so, I was actually asked for a readback.  This was my second readback that I’ve asked to do (the first time was in LSUC…).  Unfortunately, because they were going at nonstop speeds, I was thrown off and actually wasn’t prepared to give a readback — I was using a lot of shorts too to be defined later — so I was like “Um… it’ll take a while.”  Luckily, the lawyer understood what that meant and decided to move on.  Phew!  It was actually a much less stressful moment than I had in my mind’s eye (especially as a student dreading readbacks in prior days).  However, you can bet that from that moment on I tried to be as clean as possible in case he asked me for another readback.

After a short break (and I mean really short — they never specified how long the breaks would be but it was like a quick dash from the room to get a snack or to go to the restroom), the same lawyer asked me what the last question was.  He had actually asked a lot of questions before the break at that point so I said that and was able to somewhat pinpoint the last topic he was talking about.  He was fine with that.  It was a very stress-free and casual intention of requesting the readbacks luckily.

They weren’t speaking too quickly either after that but I just wasn’t able to capture everything. 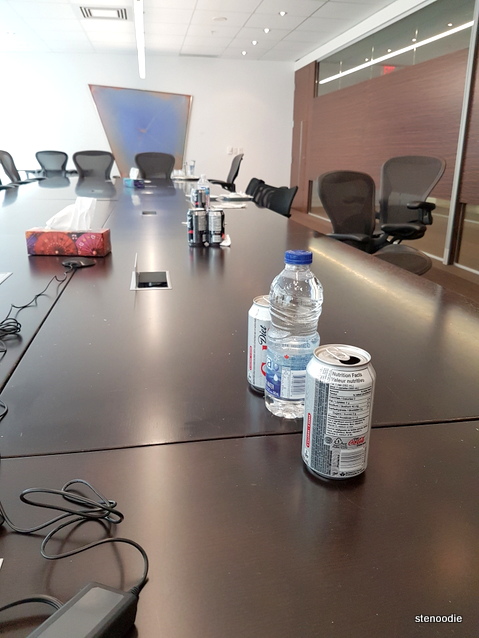 I’ve never seen so many people in the same room drink so many Cokes and Coke Zeros.. XD

This was one of the first jobs where it was really obvious that the lawyers just were content to eat in the room and nibble on snacks from the kitchen without having a regard for me the reporter to really have a “proper” break.  We were able to have a 30-minute lunch though but once I was in my seat by the 30-minute mark, they were ready to start again.  I still had a quarter of my cheese pizza left to finish. XD

Despite the constant testimony, we ended up being finished by 3 p.m. which was a nice reprieve for me.  This was going to be a really nice 200-page transcript order. 🙂

I'm a stenographer, foodie, avid traveller, and new mom who loves to share her experiences with the world.
View all posts by stenoodie →
This entry was posted in Steno and tagged Court reporter, court reporting, steno, stenographer, stenography. Bookmark the permalink.