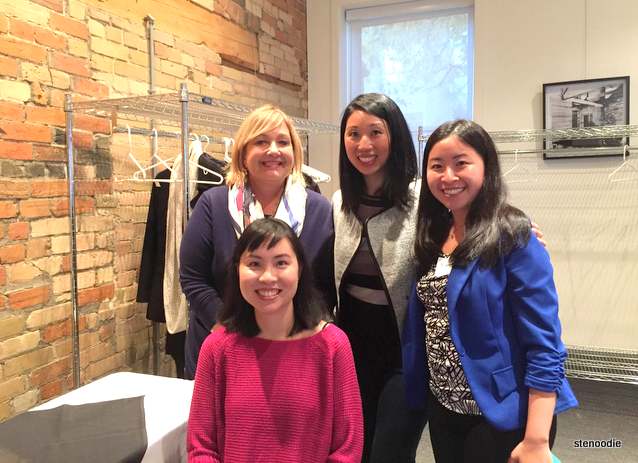 This year’s CSRAO Convention was held at the Oakham House at Ryerson University at 55 Gould Street in Toronto.  CSRAO (Chartered Shorthand Reporters’ Association of Ontario) is the second oldest association of professional stenographic reporters in North America and governs the standards and development of working shorthand reporters in the province of Ontario.  I had been to the CSRAO Convention in previous years but this was my first time attending again in a while.

I was really excited to network with my fellow shorthand reporters, learn new things about the world of steno, how to be a better reporter, as well as see my dear friend Jade again coming all the way from Hong Kong!

This year, the CSRAO Convention had two distinguished international guests who would be speaking.  Of the two guests, Stan Sakai had come last year to speak and was returning again from New York to present a segment for us.  Jade King, which I have had the pleasure of meeting up back in 2012 and also shadowed on a few jobs with her in Hong Kong, was arriving in Toronto for the first time just to speak to the CSRAO community.  What a privilege it was to have these two guests in the house! 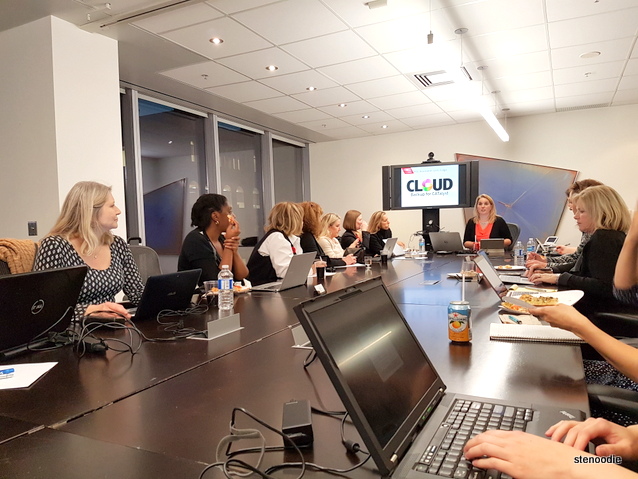 The CSRAO Convention started off with a software training on Friday evening.  While the workshop was only two hours in length, I found it incredibly valuable to see so many familiar faces again.  Court reporting is sometimes an isolating career because you work out of different offices and courts each day that it is common to go weeks (and even months) without seeing fellow court reporter colleagues.  Thus, it was really nice to re-connect with fellow friend reporters again.  It felt bizarre (in a good way) to see Jade at the ASAP office as well — since I had always been used to seeing her overseas in Asia.  She had just landed that morning and was fighting jet lag. 🙂

Karen Peck hosted the Case Catalyst software workshop where the first matter of the night was all about the Cloud software and how it could help us back up jobs automatically.  The rest of the evening had a lot to do with reporters sharing their trouble areas or helpful tips.  It is interesting because everyone knew something different or use their software in different ways. 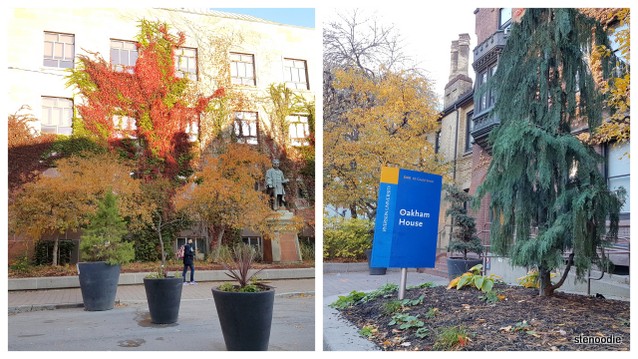 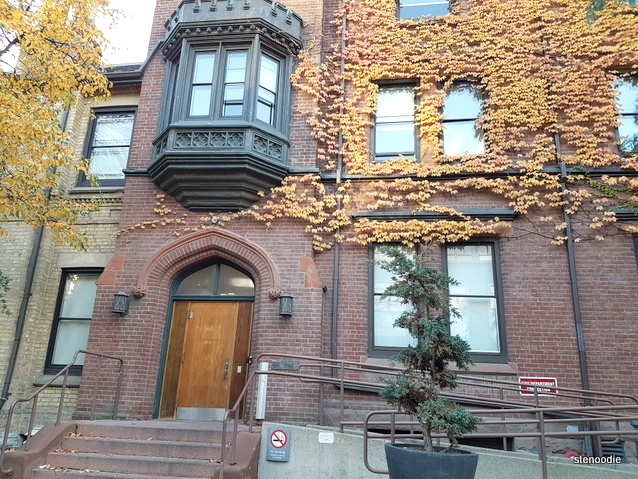 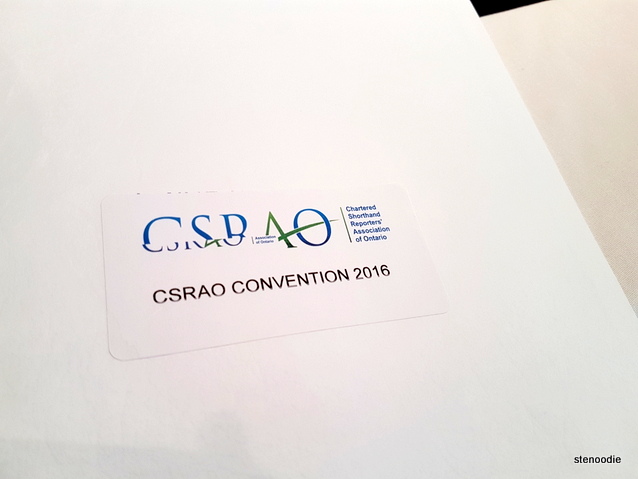 The next morning, the convention started bright and early at 8:30 a.m. (reception and registration began) and there was a continental breakfast to enjoy as well.  We received raffle tickets along with our registration so that we could have a chance at winning one of the many raffle prize draws that day.

Breakfast to start the day; coffee because I was feeling very tired that day

The space at Oakham House was a warm inviting space for us to learn from the various speakers that afternoon. 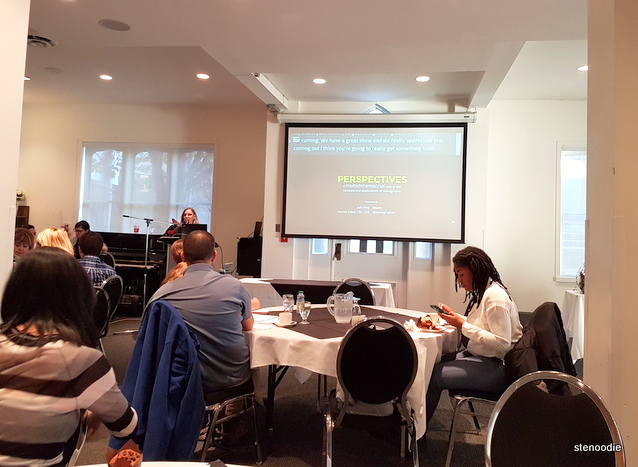 The current president of the CSARO, Angela Gunn, spoke for a bit before handing it off to our guest speakers, Jade and Stan.  I am in awe of all of the accomplishments and talents that Jade King is capable of and even though I had already known many of the things she spoke about in her presentation, I was still in awe and held rapt attention.  Jade is truly the steno queen and her realtime abilities, captioning skills, and especially punctuation shorts are so on point.  To really learn all that Jade knows will take many, many mentoring sessions and yet still be unable to rival her talents! 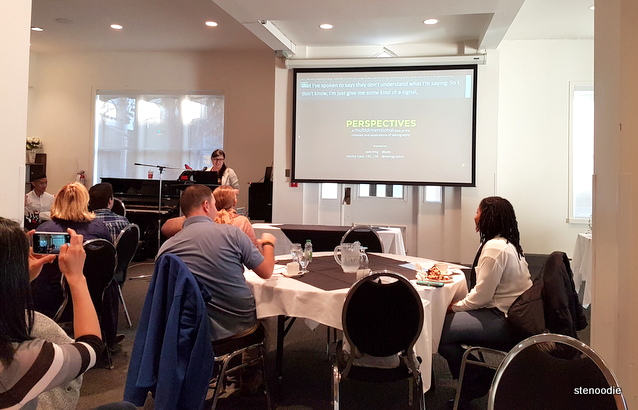 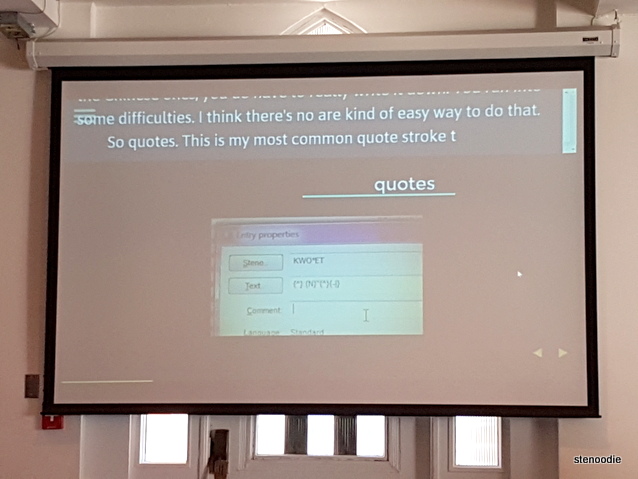 An example of realtime quotes in Eclipse software 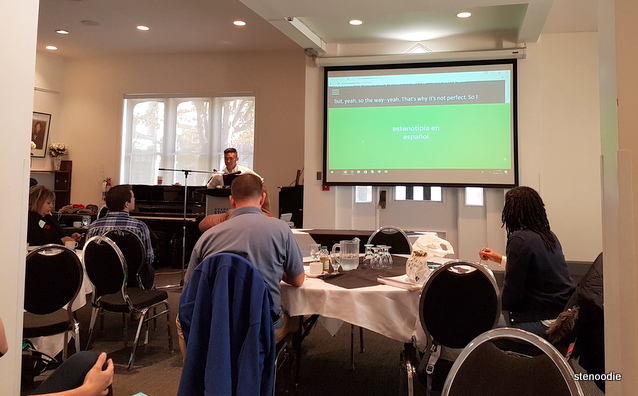 Everything they said appeared as text on the screen via Aloft

It was the first time that I had heard Stan speak.  I first met Stan in 2013 when I attended the NCRA Convention in Nashville with Cynthia.  It was so nice to see him again.  Stan is a wizard at technology and even invented Aloft, a live broadcast captioning program, in lieu of stream text (it looks better and easier to use).  He showed us how stenoing in Spanish would work compared to English.  Stan is a master of languages.  He speaks English, Korean, and Spanish fluently, and several other languages that he is currently picking up (I don’t remember them all, but I was impressed to hear him list them out!).

All the while when Jade was speaking, Stan was captioning live for us and the captions appeared across the screen via the Aloft program.  Similarly, when Stan was speaking, Jade was captioning his words for us to read via Aloft.  What a pleasure it was to have two of the most talented stenographers showing off their abilities that day!  Realtime is the goal for all of us. 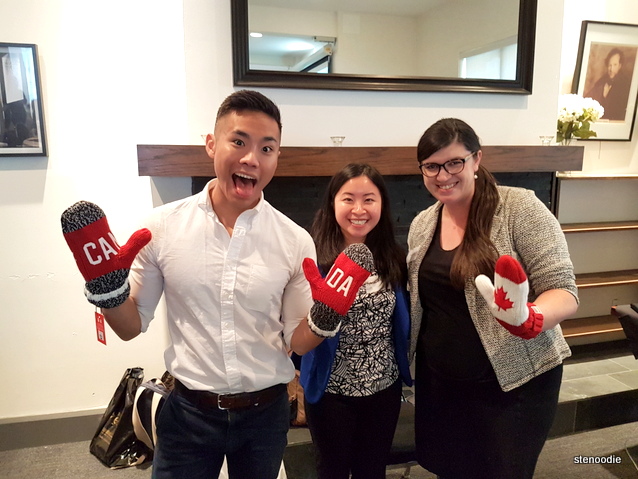 With the two steno superstars and their Canadian souvenirs!

After the morning segment came to an end, we enjoyed a satisfying lunch buffet!  As always, I just had to take photos of my food… (#foodbloggerhabits). 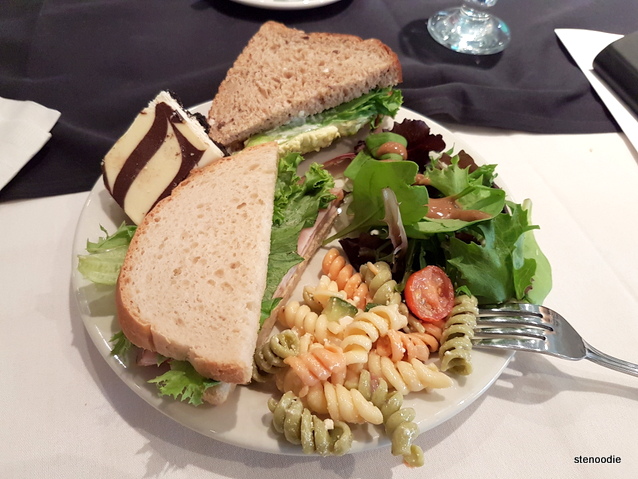 After lunch, we heard the serious matters of the AGM.  I won’t get too much into it here, but basically, we need to start caring a lot more about our realtime abilities and steno community if we want to make it and continue being active reporters and allowing CSRAO to hold its title as the “second oldest association of stenographers” in North America.

Anyway, there were raffle prizes drawn throughout the day and we were lucky to have two winners picked from our table!  Cynthia and Lisa both won a raffle prize.  Cynthia was so excited for her win!  (I think she deserved to win based on how excited she was. 😛  Teasing!) 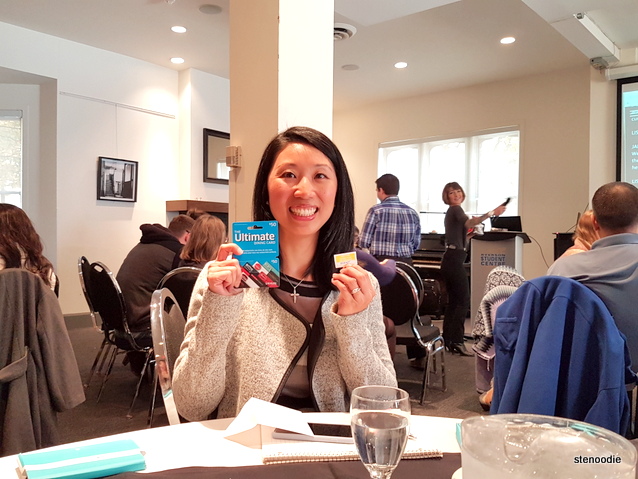 The Court Reporting Documentary: For The Record was screened for us to view.  This was my first time watching it (I know some in the room had already watched it before) and I really enjoyed how it showcased what stenography is to the average person.  I also recognized the clips taken from the NCRA Convention in 2013 that I happened to be at too. 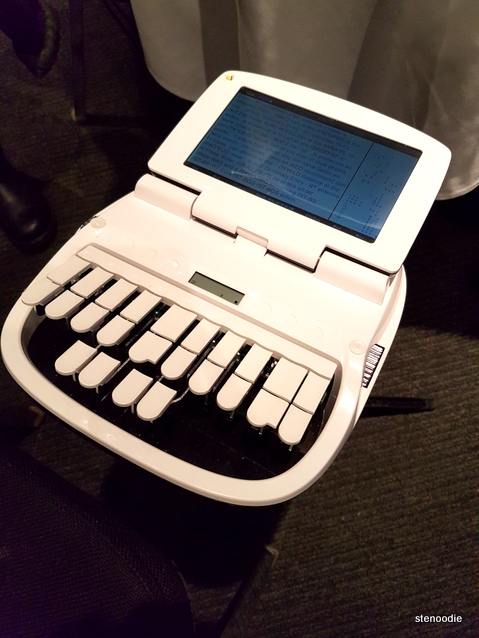 After the film, Dr. Anthony Chan talked to us about ergonomics, proper warming up and stretching, and general physical health tips for our bodies in order to maintain a long and thriving steno career.  We learned some stretches to do before a day of work in order to minimal strain, carpal tunnel, and the like. 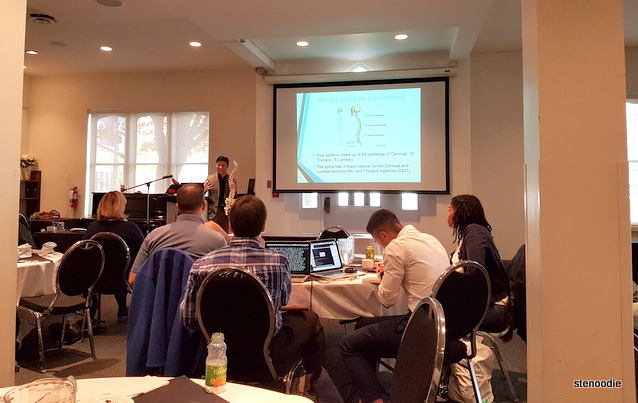 Before long, it was 5 p.m. and the convention was winding down for the evening.  We took some photos (I regret not taking a photo with everyone) and some of us headed to Signs Restaurant for dinner. 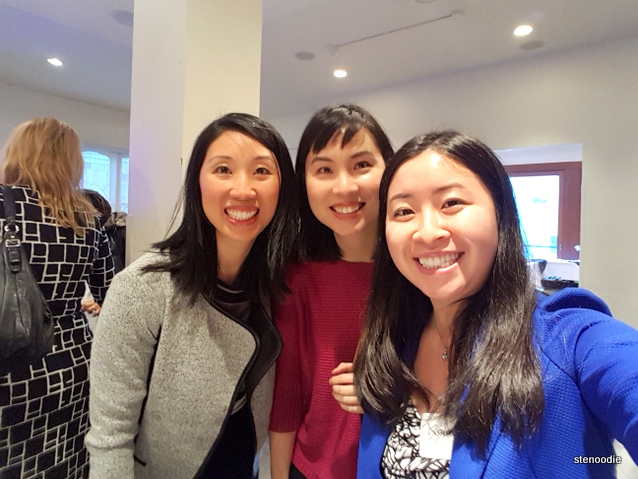 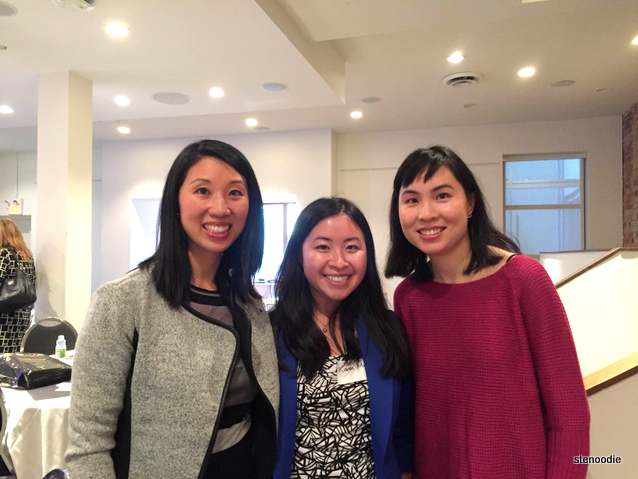 Thanks for sharing this photo with me, Cyn! 🙂

I had dined at Signs Restaurant before (shortly after they opened in 2014) and really enjoyed the food this time.  It was great to be among court reporter and captioner colleagues to learn from their experiences. 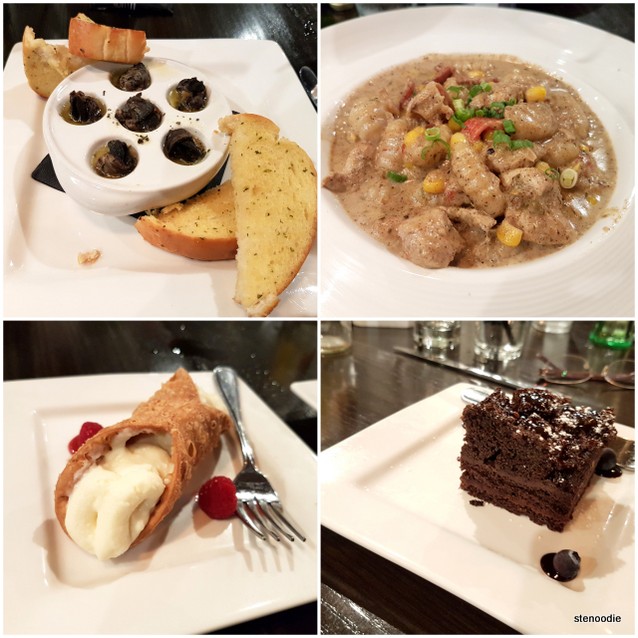 Three-course meal at Signs Restaurant. I shared the appetizer and dessert with Terry to try more dishes! 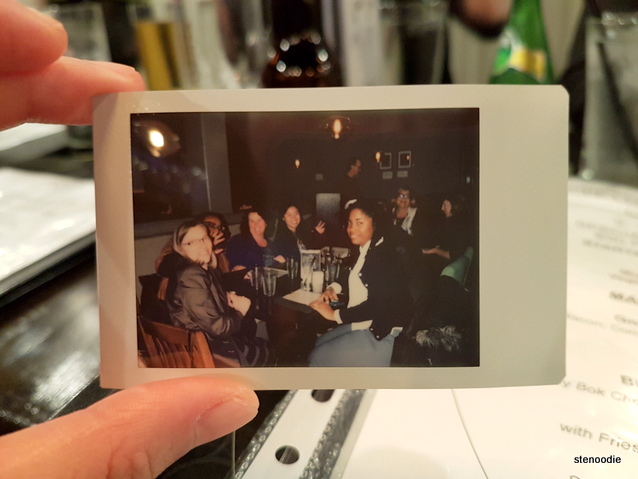 It was truly an honor again to have two international stars, Jade and Stan, at our convention this year.  Next year’s convention marks the 150th anniversary (!) of the association.  I am quite curious to see how they will celebrate such a milestone anniversary! 🙂 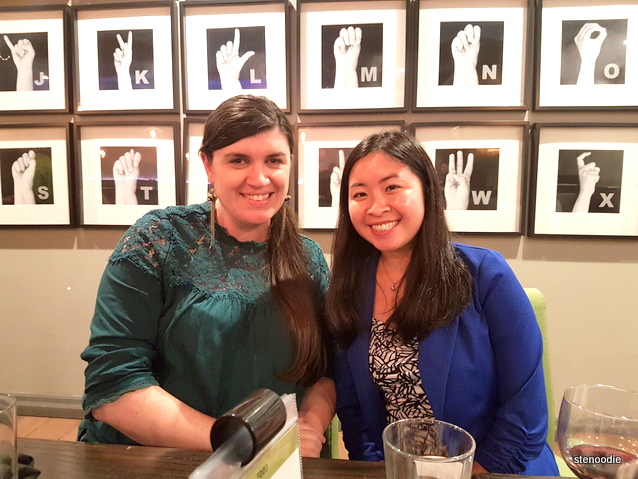 Until next time, Jade! See you! 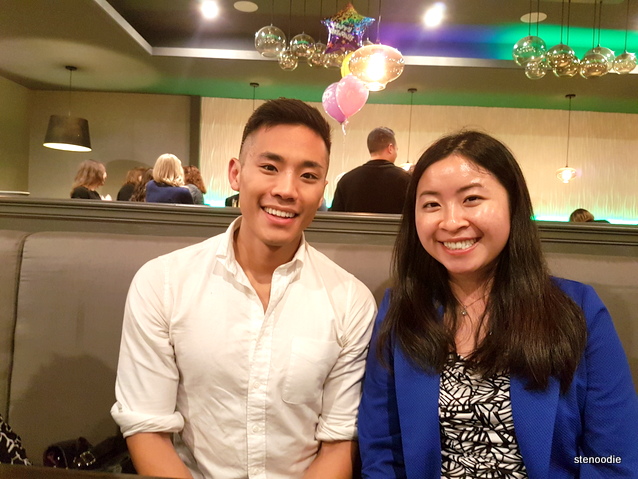 Hope to see you again, Stan! And keep on perfecting those multi-language steno keyboards! Really excited to hear more success from you