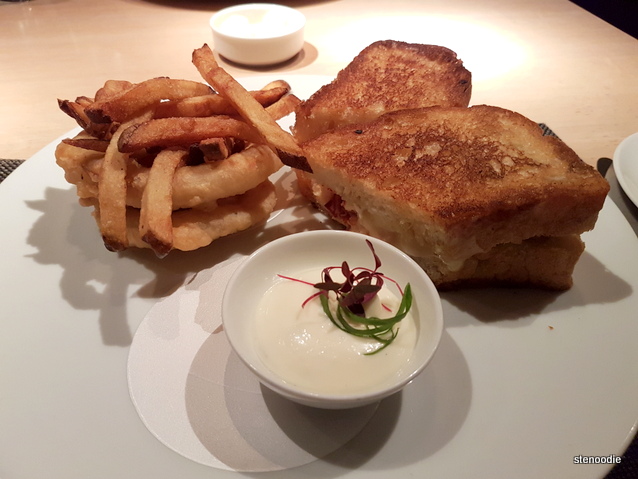 For my birthday lunch, Ken took me to Bymark for a lunch getaway.  I’ve been to Bymark previously before (for Summerlicious 2013 where Daphne and I had a memorable dinner experience — you can read about it on that blog post here).

This was my first time returning back for a meal.  We received a selection of bread from a bread basket that the server was handling out and served with ample balls of butter on the table.

I ordered the Lobster Grilled Cheese Sandwich.  It came with a choice of crisp frites, tempura onion rings, or green salad.  There was actually a choice of both fries and onion rings together so I chose that.  Ken got the Beef Brisket Sandwich.

It was really packed here for lunch!  So many suits and professionals dining together that it was actually a little bit loud.  Since it was am upscale spot, the lighting was dim and set the mood for a classy and intimate lunch venue.

I really liked the Lobster Grilled Cheese Sandwich!  The bread was toasted with butter and the chunks of lobster were substantial.  There was a slice of pancetta with the aged brie too which gave it some saltiness.  The first few bites were salty for this reason but the lobster was really succulent and delicious.

What I also liked were their lemon garlic aioli that went so well with the fries.  The tempura onion ring was actually really good too.  It was like a seasoned battered onion ring.  It was cute that they put the fries into the hole of the onion ring; it was like an onion ring basket with fries in it.

After one half of the sandwich plus all of the fries and onion ring, I was already stuffed.  It was really filling!  I asked for my half to be packed away as did Ken’s half.

The 72 Hours Sous Vide Beef Brisket Sandwich was like a Korean style sandwich to me; almost like a bamh mi with kimchi. 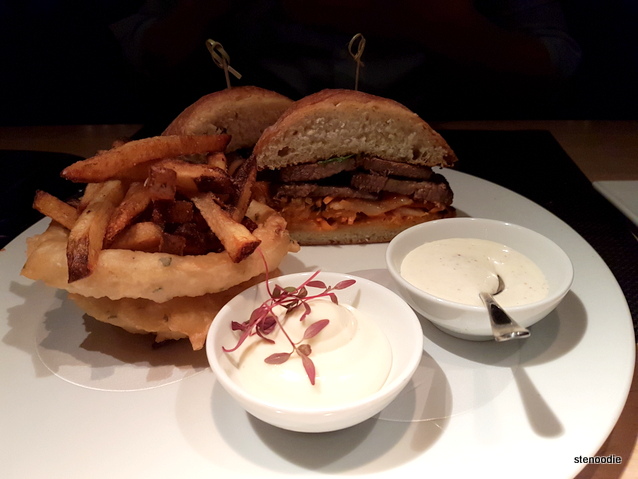 Since it was my birthday, Ken had a birthday cake for me!  Yay! ^_^ I wasn’t expecting it so when he asked the server the bring out the cake from the fridge, I was like aww, yay!  What kind of made the experience an interesting one was that in short, the server at first gave us the entire paper bag and box that the cake was in… um, okay?  Don’t they usually serve the cake too?  And when we asked for a knife and plates to cut the cake, the server misunderstood for a few seconds what was in the box until he finally said that they might not be able to serve it here because people might be allergic and that he’d have to ask the kitchen about it first.  Hmm…  okay.  When he came back with the knife and plates, we knew it was allowed but still couldn’t shake the awkwardness of the moment.  At that point, Ken also told me that when he arrived with the cake and asked for it to be placed into the fridge, the staff actually put the cake into the coat check.  Hmm?!  He had to voice it verbally again that it was a CAKE and that it needed to be in the fridge and only that at point did the cake go into the kitchen to the fridge.  How… weird?!

The lobster grilled cheese was so delicious and just as delicious when I had it later again that week when I reheated it at home. 😀 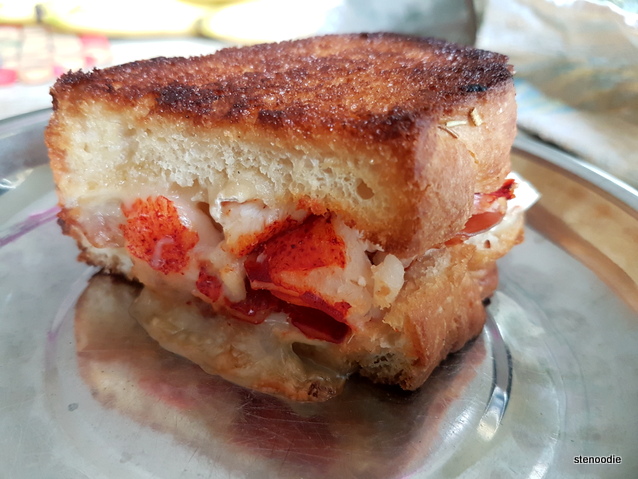 The other half of the Lobster Grilled Cheese Sandwich that I enjoyed at home. You can see all the lobster meat here!