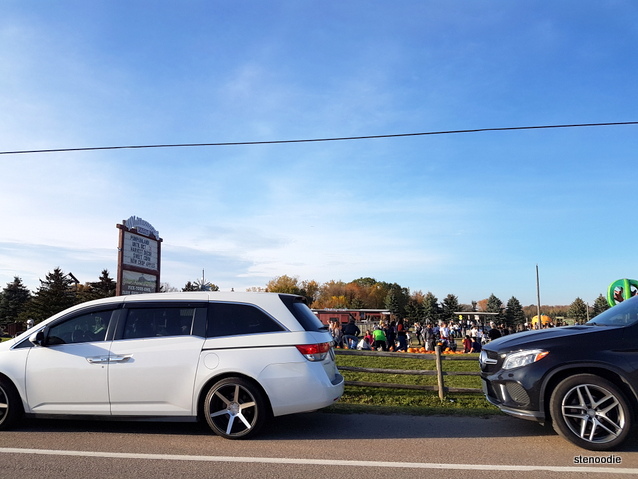 October 22, 2017:  This past weekend, we went to visit Whittamore’s Farm before it closes down at the end of this season in 2017.  (Why are so many long-standing businesses closing in Markham? 😦 )

I believe I should have visited Whittamore’s Farm as a child in school during field trips but I can’t be certain (I think I might have picked strawberries here with family in 2000).  Nevertheless, if I hadn’t visited as a kid, this would have been my first and last time visiting Whittamore’s Farm as an adult before it closes.  According to this article, the Whittamore family is closing their farm to the public after 65 years of providing fun farm family-friendly activities, berry picking, pumpkin picking, and more because they want to refocus their interests and opportunities to somewhere else.  Thankfully, they are not selling the farm right now.  As I mentioned it to my colleague the other day, perhaps another company will buy them up and continue the farm business.

In any case, when we arrived around 1 p.m. and found a parking lot in their busy grassy lot, we were in the midst of a very long line-up.  There were so many people!  This year’s autumn has been a warm and beautiful one and despite it being mid-October, it felt very much like a sunny summer’s day.  Lots of families were out with their kids to enjoy one more weekend outdoors before the frigid weather arrives in Ontario. 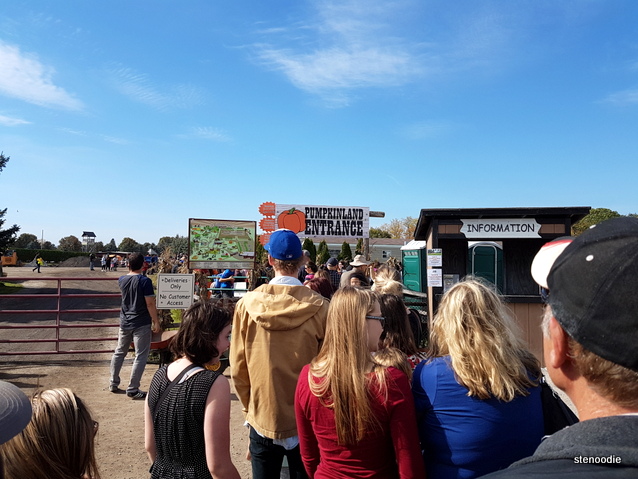 Line-up to get inside 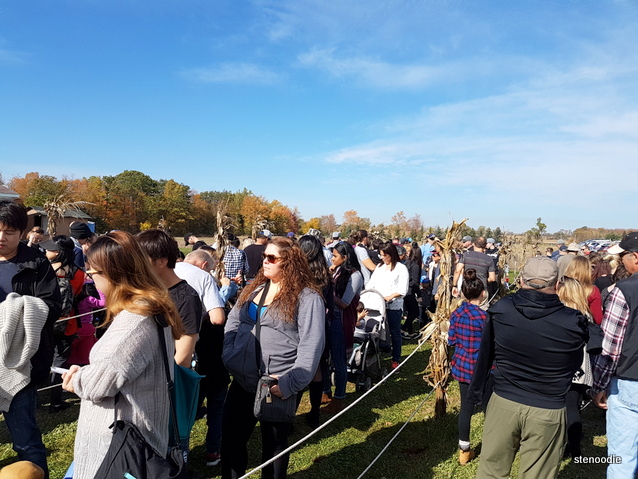 Whoa we waited in line for an hour :S

After an hour of waiting in line, we finally arrived at the Fun Farm Admission Gate to purchase our entrance fee to go into Pumpkinlan.  Adults were $13 on the weekend or $9 on the weekdays.  They have family of 4 passes too.

We were actually really lucky that day to get in because around 2 p.m., they actually closed off the admittance to the farm because they were over capacity!

Once inside, we knew that it was a total family and kid friendly site.  Nevertheless, we still had a lot of fun.  Plus, the weather was beautiful that weekend.  It was extra special to visit knowing that this was going to be the last time it opened to the public. 😥 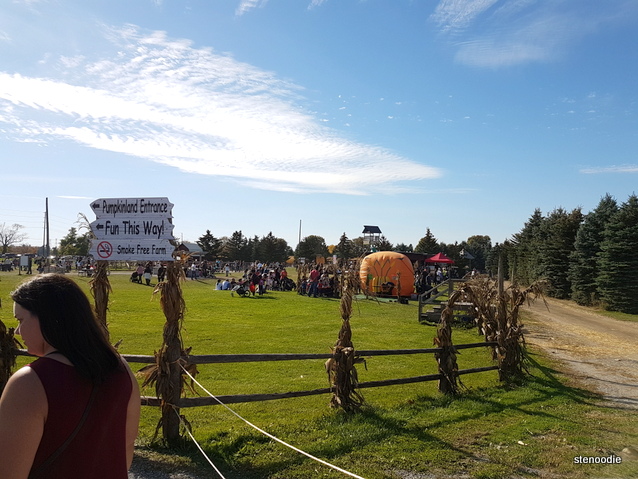 First, I squeezed some milk from the Wooden Milking Cow for fun.  Hehe.  This was so cute and creative to have on site! 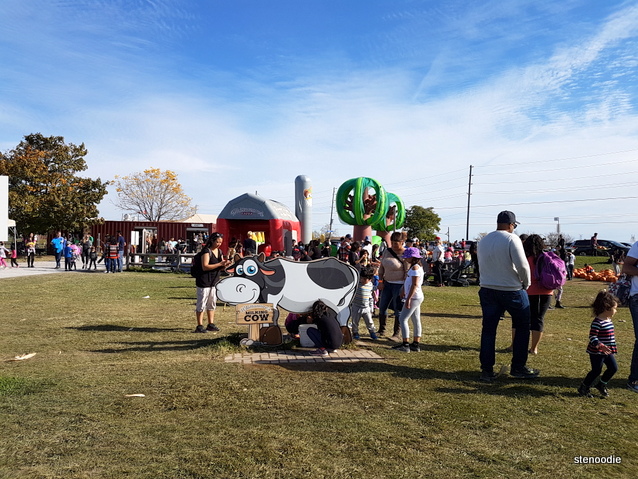 They had a mini farm where there were ducks and chickens. 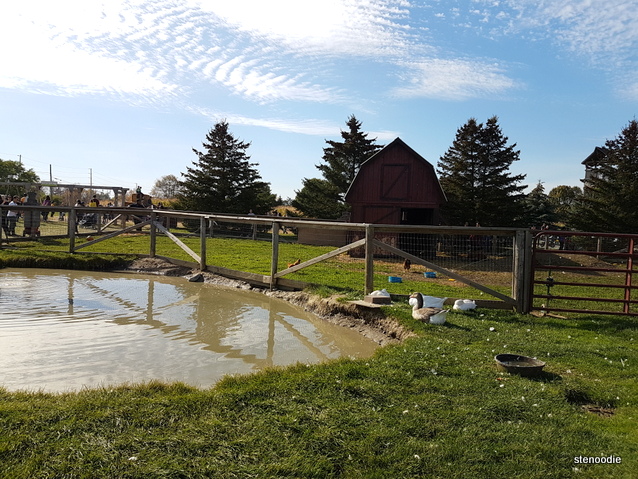 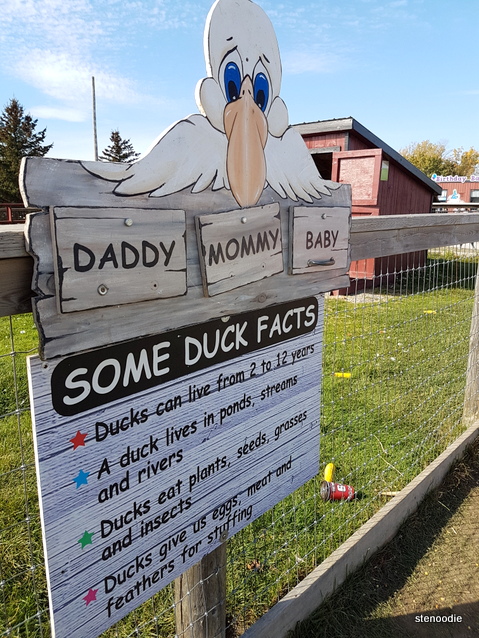 Educational facts for kids (and adults?)

There was a station for Duckie Races where if you paid $2, you could get a small rubber ducky to race on the watery track.  A kid would pump water and watch their ducky float down the track.  It was so cute!! 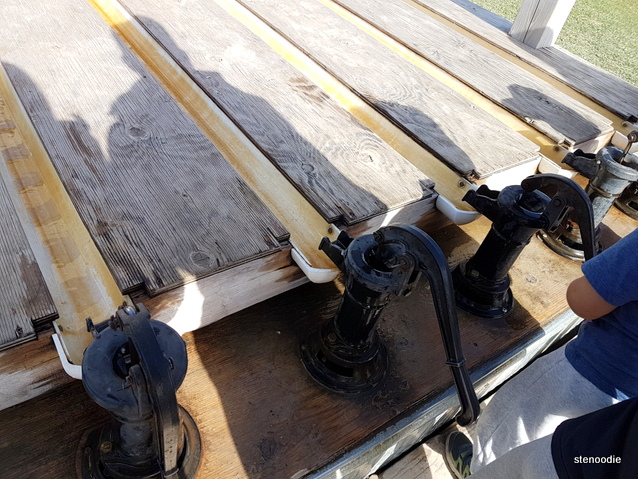 Pump water out using the pumps 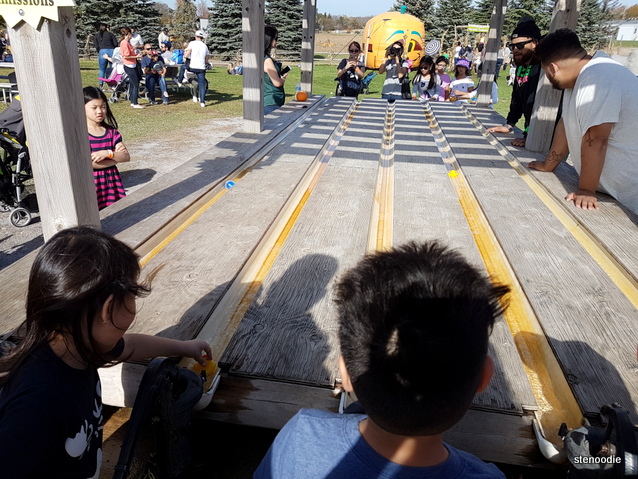 Push water out to race duckies

The Farm Concessions was also next to a Birthday Barn made for birthday celebrations; so great for kids! 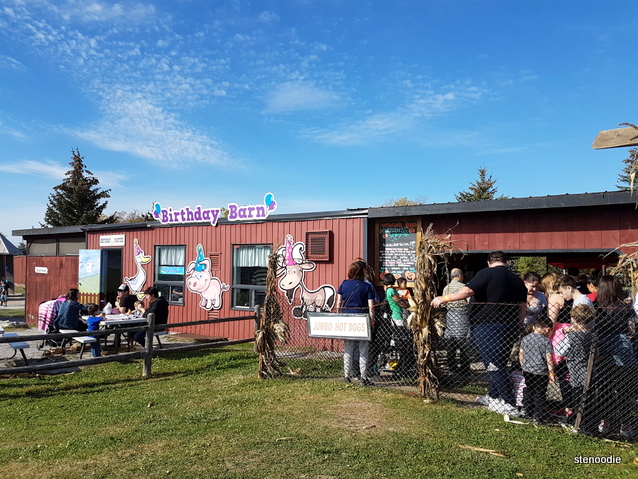 After this, we immediately went to the Corn Maze.  I had never been to a Corn Maze before and this was very exciting.  This was definitely made for kids so it wasn’t difficult per se but still fun to wander through the tall corn stalks and take photos.  We were able to harvest two corncobs from the corn stalks too.  XD 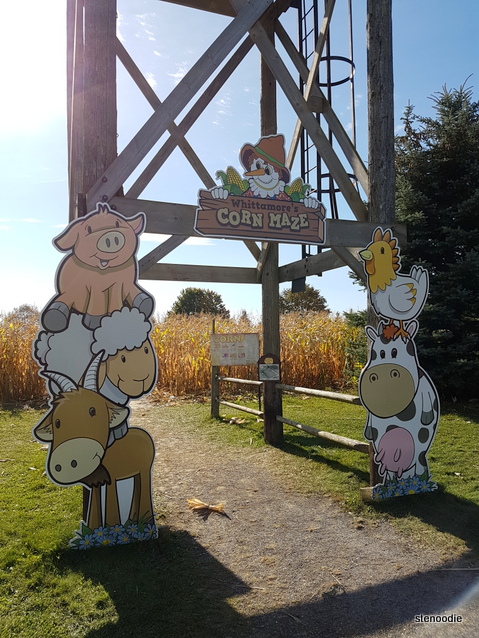 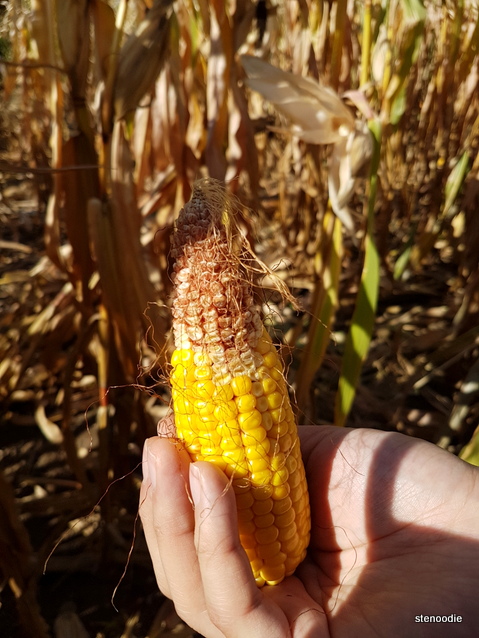 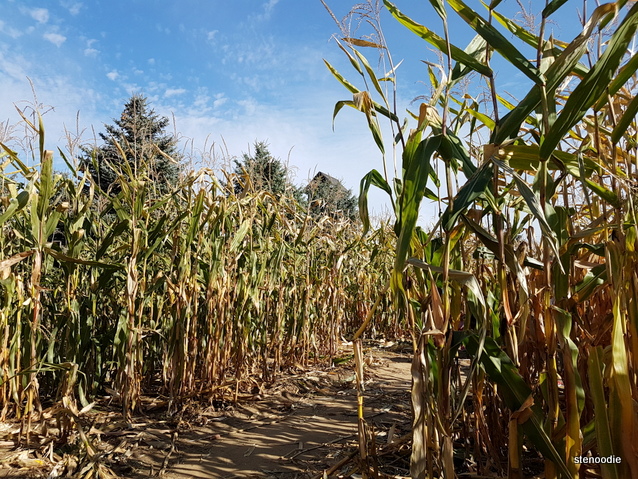 We rested on the Straw Pyramids and watched kids play on the Horse Swings, Rock n’ Ride Horseplay, and Tractor Tire Climb.  This place was so well-made!  Again, such a shame that they will no longer be in business after this season. 😥 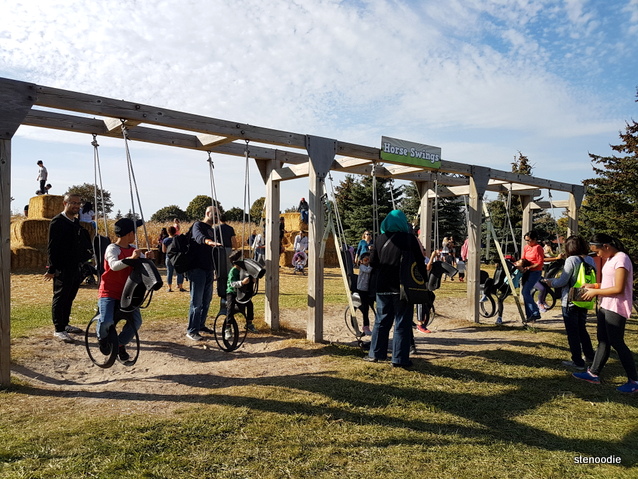 We passed by the Farm Animals again and this time flirted with a goat and a cow.  Ken teased them with the corncob that we harvested and it was too bad that the corncob had already dried up otherwise the goat and cow could have successfully eaten it all.  They seemed hungry.  XD 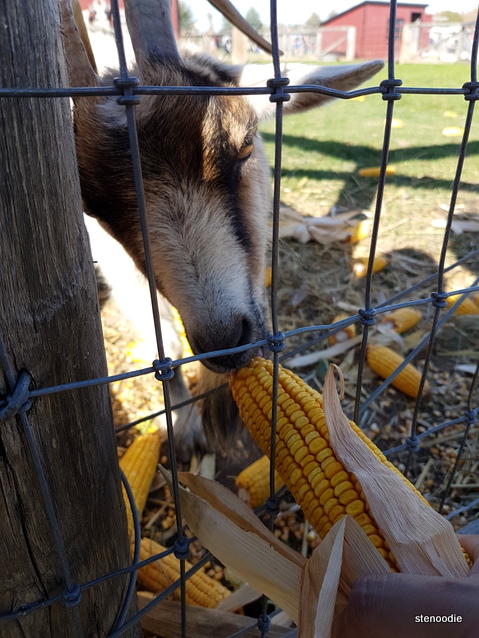 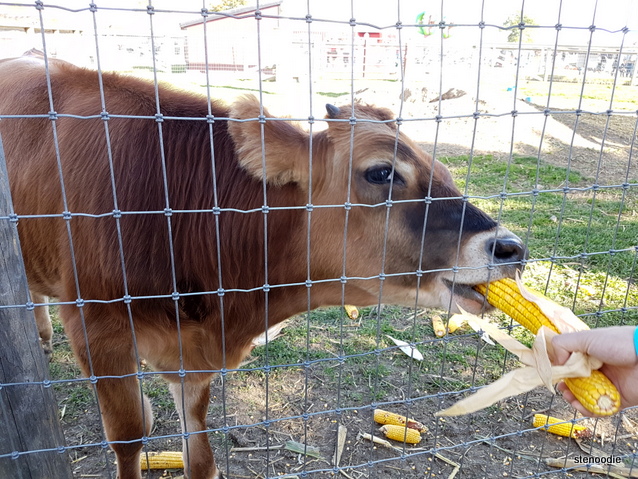 This cow taking all of the corn

They also had Whittamore’s Mining Co. where you could use a pan to comb through the running water to see if you could find any gems (a pretty common kid’s activity). 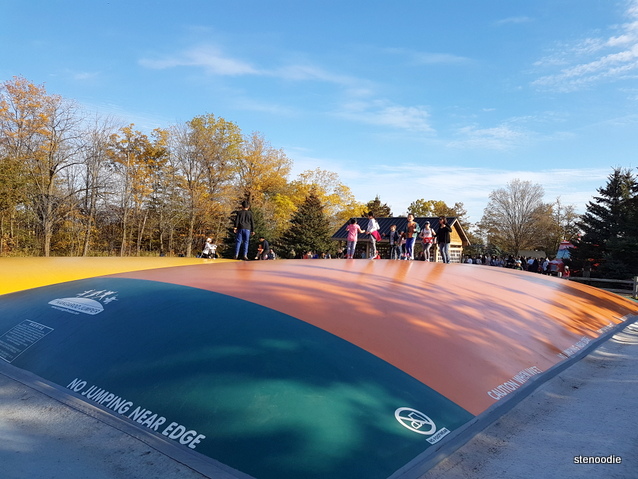 This was the best! So fun!!

We made our way northwards on the farm and lined up for the Jumbo Jumping Pillows activity.  This was again such a creative activity to have on the farm and it did seem to fit with the whole farm theme too.  These were essentially outdoor giant flat-ish trampolines for adults and kids.  We jumped on them barefoot after lining up for a while.

This was a real pleasantly surprisingly fun activity!!  I couldn’t stop laughing while bouncing on the pillows.  It was so bouncy especially when nearly everyone else on the pillows was heavier than me. XD 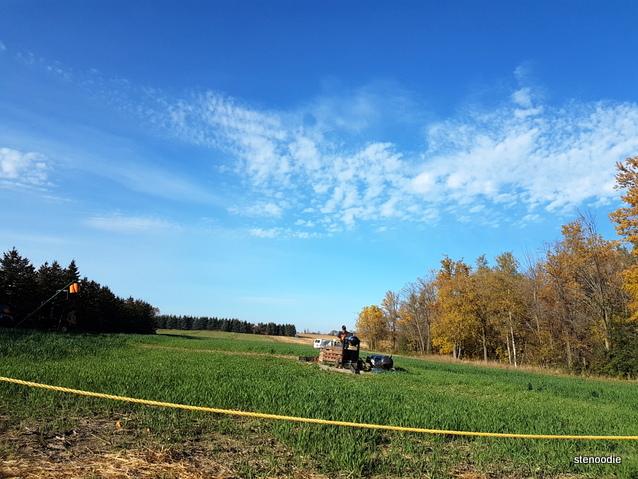 It was perfect that we were in that area already when we finished jumping because the last show of Farmer Frank’s Pumpkin Canon & Trebuchet Show was held at 4 p.m. that day.  This was really cool.  We watched pumptions being fired out of a canon and also hauled over the field to see if it could reach or break the previous year’s record of 400+ metre’s throw.  It was a very kid friendly show.  We also watched him stuff in a bunch of variety of vegetables (like a vegetable stew) and watch it all explode over the field.  It was mighty entertaining even if a bit silly and over-dramatic. XD

We took a quick stroll through the short but beautiful Nature Trail.  This year’s fall colours are gorgeous. 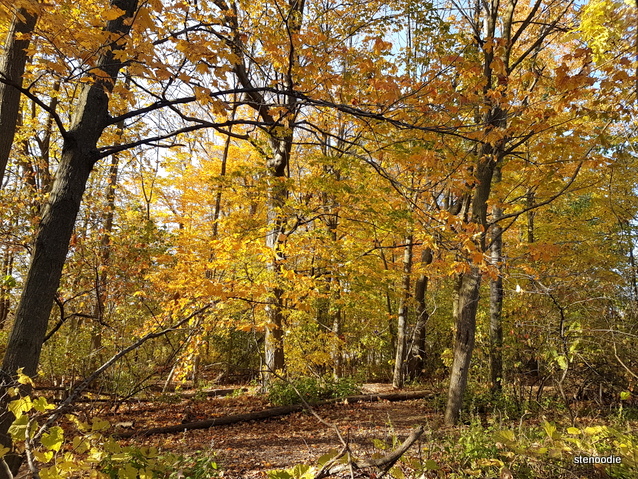 As per fall traditions, they also have Wagon Rides.  It’s amazing how many different activities Whittamore’s Farm have implemented and carried through.  A truly one-of-a-kind farm for a day’s outing.

There was also the Pumpkin Pile near the exit where people could pick their own pumpkins to buy.  There were so many people lining up to buy pumpkins!! 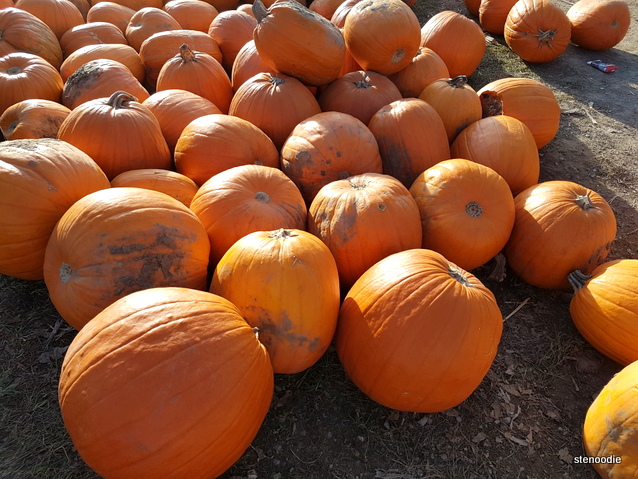 With that, we concluded our trip to Whittamore’s Farm.  I’m so sad that such a gem of a place like this in Markham is going to close up its doors.  They really put in so much thought and effort into building this farm.  It will be so sad for the kids and families when this place closes.  Will they ever open up again or will another entity step in to re-store the farm and allow business to run?  Time will tell, I guess. 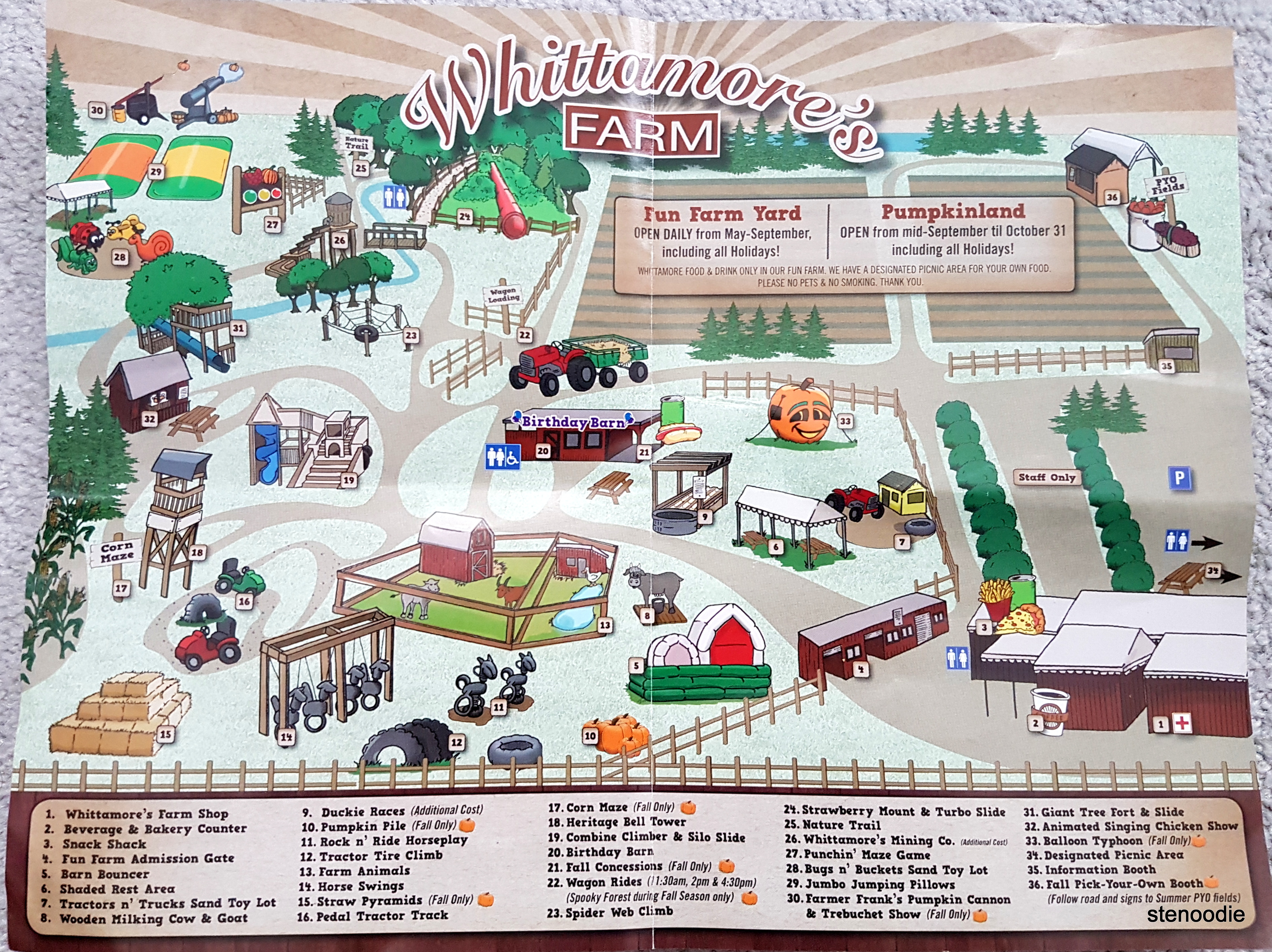 Map of the farm — look at how impressive it is with all those activities! 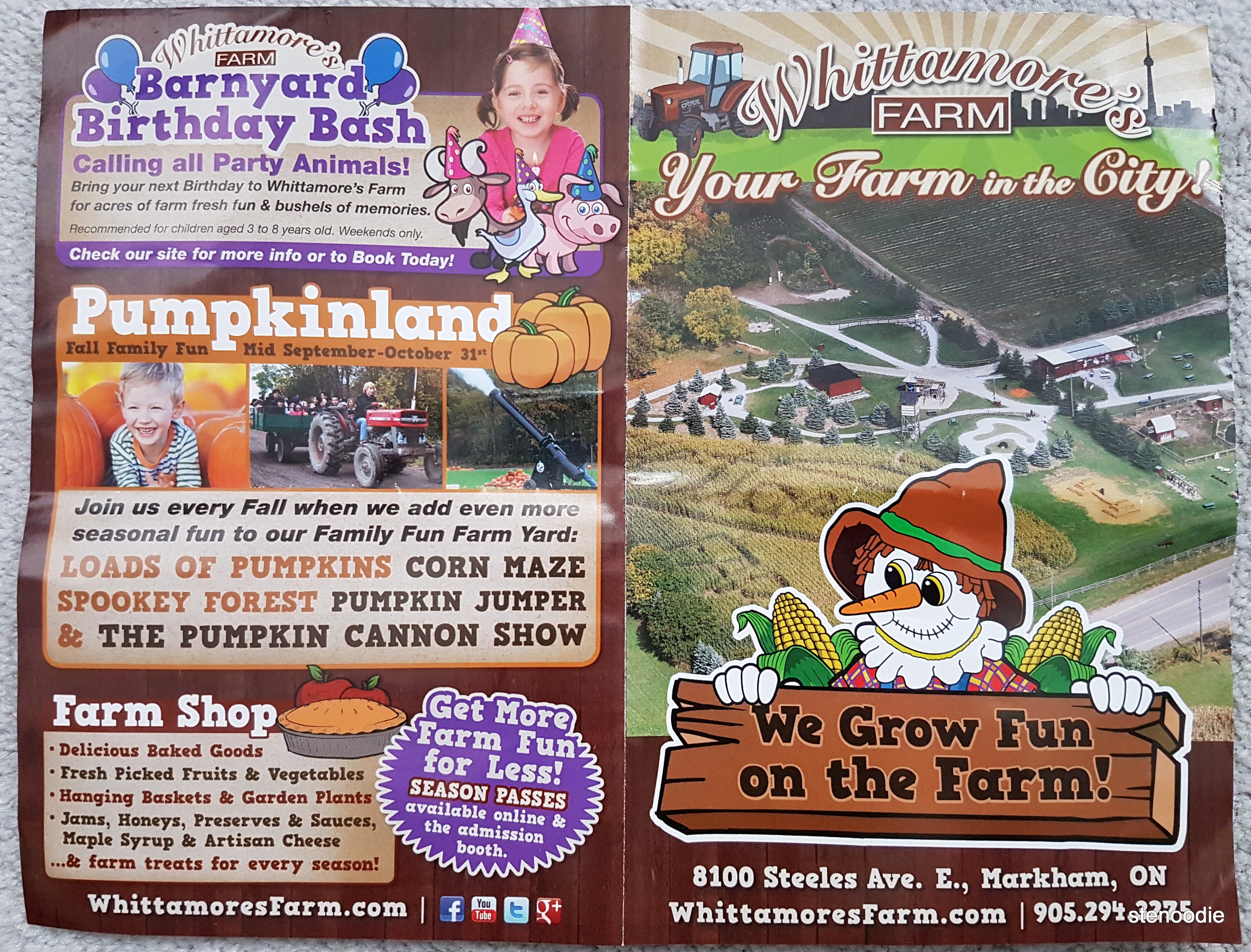 So, so many family-family activities!