Volunteering at The Scott Mission 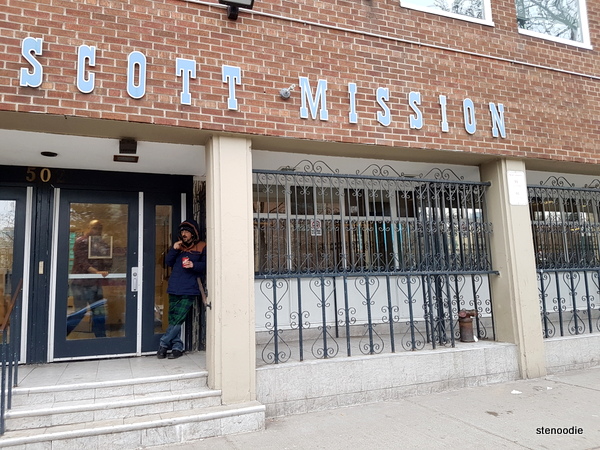 January 27, 2018.  Volunteering makes my soul smile.  Yesterday, I participated in the volunteering session hosted by the Trillium Lions Toronto chapter at The Scott Mission in downtown Toronto.  The Scott Mission is a Christian non-denominational charity organization that provides daily hot meals to the homeless and those in need as well as shelters for men and low-income families.  They also have a clothing bank available for those in need.

I arrived at The Scott Mission on the Saturday morning just after 9 a.m.  Right after I took the above photo, the door opened and a man came out and inquired if I was volunteering.  I said yes and he ushered me in.  Apparently they keep their doors locked so I was glad that he took notice of me and welcomed me in.

I hung my jacket in the closet and left my belongings there too since the gentleman told me they would be locking up that closet later.  I signed in, put on a name tag, an apron, and a hairnet and spent most of the morning helping Kim with chopping up red peppers, yellow peppers, potatoes, carrots, beets, and eggplants into cubes.  They would be using these vegetables later on for their vegetable soup.  (I learned that these vegetables and other products were donated to the shelter by stores like Costco.  They donate the goods that aren’t good enough for sale but haven’t gone totally bad yet.)

The other Lion volunteers slowly arrived too and they were given other tasks such as dumping the Big Mac sauce bottles into a huge vat or cleaning up the tables and readying them for the two meal services (which was at 10:30 a.m. as well as 11:30 a.m.) or washing various veggies.  Apparently there were a lot of us that morning and everything was done very quickly.

By 10 a.m. or so, we took a short pause and were given a quick tour around the facilities.  I didn’t get the name of the staff who was showing us around but he was very nice to do that for us.  We toured the room that held the 70 beds and bunk beds for the men that could register and stay nights there.  They could stay anywhere from a day to several months at a time if they needed to.  They also had shower facilities there.  There was a devotion room too.

We visited the downstairs reception area that low-income families could come and apply for stays as well.  They had huge room with donated clothing and shoes that the needy could use as well.  We also saw their pantry briefly before we got ready for the serving of food at 10:30 a.m.

We got into a line and the cooks scooped potatoes, sausages, and a tomato and cucumber salad on to the plates.  Each tray held six plates.  It was a very efficient assembly line!  The “guests” (as I would like to call them) had already arrived inside the dining room and were helping themselves to the milk, vegetable soup, bread, and pastries that were already on the table.  One by one, we each went out with the trays of food.  They also had a vegetarian option if the guests required it.  The vegetarian option consisted of the potatoes, tomato and cucumber soup, and also fruits and quinoa.

We had so many volunteers that day that I only got one chance to serve the guests before the queue had finished and we were completed the serving of meals.  It was so quick!  Also, within 10 or 15 minutes, we were instructed to put on gloves and begin tidying up the tables.  The guests had eaten quickly as well!  We put away the soup pots and the pot placemats, the jugs of milk, the plates and bowls and cups, the cutlery, and wiped down the tables and chairs.  After this, we put out the fresh set of cups, bowls, napkins, pastries, utensils on the freshly wiped tables for the next set of guests at 11:30 a.m.

Once this was done, we washed up and were also treated with our own set of snacks!  The Scott Mission was generously able to provide all of the volunteers with coconut water (mmm, I love coconut water!) and some chocolate muffins and cinnamon rolls from Costco as well.  This was a nice refreshment break for us. 🙂

By 11:30 a.m., we all lined up again in the same fashion as before to serve the second round of guests!  This time, I was actually asked to do the task of scooping out the potatoes onto the plates for the assembly line.  What a pleasure this was!  I really liked doing it.  From doing this task, I learned and realized why at big set dinners why sometimes one plate of food will get a slightly bigger portion or smaller portion of potatoes, let’s say.  It’s because when you’re scooping out the potatoes at a speedy pace, it’s difficult to make sure that every single plate has a very even serving of food. XD  I tried my best to even all the portions out but of course there were some slight variations for sure.  Having this experience gave  me more perspective into how cooks and servers prepare food in the kitchen at restaurants. 🙂

Again, within 10 or 15 minutes, the guests were finished their meals and we went out again to clean up the tables.  The guests could actually opt for some container or something to pack up their leftover food too.  It was a very humbling experience to serve these guests.

By 12:15 p.m. or so, we were completed with the two rounds of food service.  We were free to go!  Again, we had so many volunteers on this day that we were told we were finished with everything sooner than they usually do.  Yay!  Many hands make light work.  Teamwork! 🙂

I thoroughly enjoyed this volunteering session at The Scott Mission.  I had never done something like this before where I prepared and served food to those in need.  It was very fun and rewarding and something I absolutely would love to do again.  I’m going to visit their website and/or get the contact information from the Lions to see how I can come here on an individual basis to help out again. 🙂

Thank you so much to the Trillium Lions for setting up this awesome volunteering opportunity up for us!

(No other photos were taken during the session but I know some of the Lions took photos.  Hopefully when they share those, I can post them here too!)

I'm a stenographer, foodie, avid traveller, and new mom who loves to share her experiences with the world.
View all posts by stenoodie →
This entry was posted in Philanthropy and tagged 502 Spadina Ave, @TheScottMission twitter, Scott Mission food bank, Scott Mission volunteer, serving up hot meals to the homeless, Toronto, Trillium Lions volunteering, volunteering at Scott Mission. Bookmark the permalink.