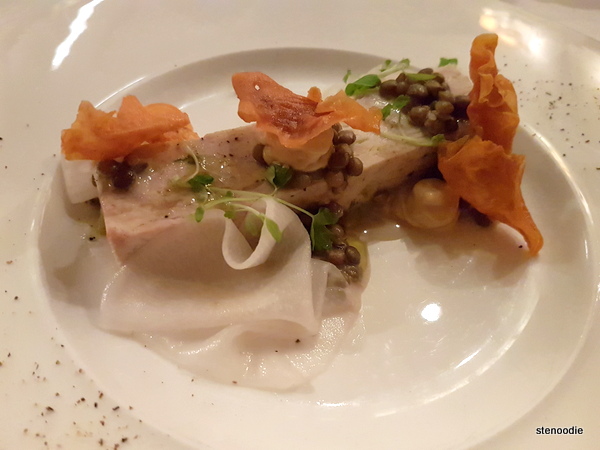 January 27, 2018:  Winterlicious at Auberge du Pommier!  I’ve always wanted to dine here for a ‘licious meal but never was able to make a reservation until this year when I used the Aeroplan advanced booking system. 😀

Auberge du Pommier is a super fancy French restaurant that has been in North York since 1987.  It’s a very intimate and sophisticated restaurant lined with wine bottles when you first enter.  They also don’t have any ground parking so you’ll be parking underground on a complimentary basis with the restaurant (the hostess will stamp your parking ticket for you).  The restaurant itself is located on Yonge Street and somewhat hidden away from the main road.

We were brought to our table after the reception ladies took our coats into the coat check.  I liked how they used a small metal numbered plate for identifying our coats instead of a paper note — saves paper and made it seem even more fancy.

We were led into the dining room which was so gorgeous and dimly lit.  I expected service here to be top-notch because this was definitely a restaurant that was known for its attentive service and hospitality.  I expected nothing less.  (That night, a server personally led me to the washrooms [which were located down two flights of stairs], the server folded Ken’s napkin when he went to the restroom, and crumbs were swept away from our table using a special tool.)

The Winterlicious prix fixe meals have all gone up in price this year.  For dinner at Auberge du Pommier, the price was $53 per person this year. 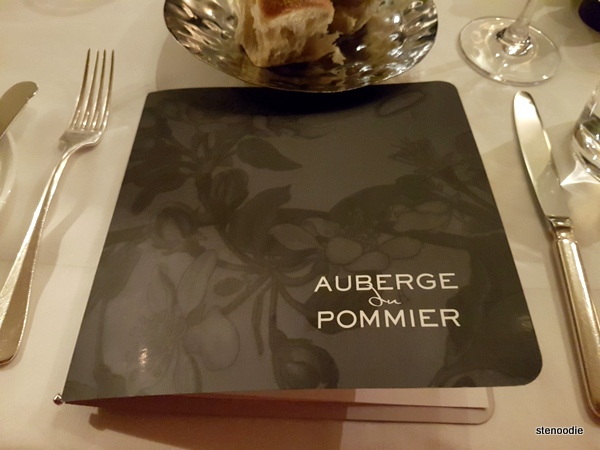 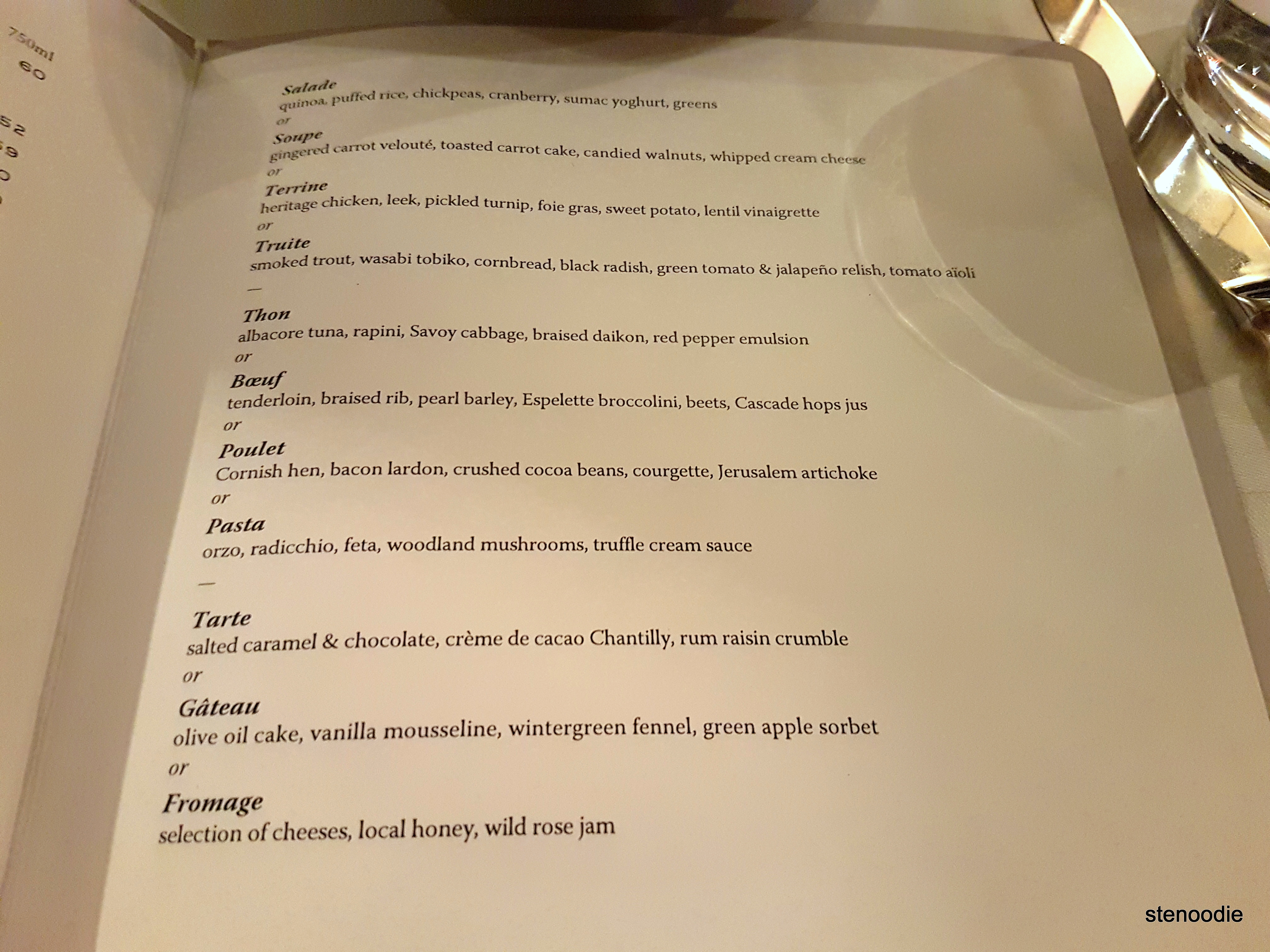 We were immediately given bread and butter to start and served our drinks. 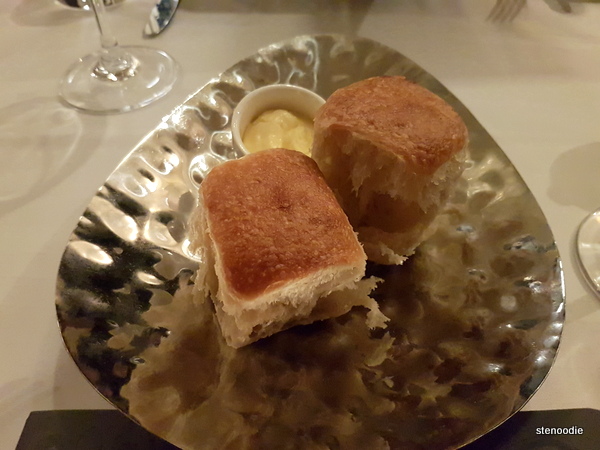 Bread and butter on a fancy metal platter

The food was all really good that night and arrived in a reasonable time (with the exception of the appetizer which arrived at lightning speed after we had placed our order XD).  What I didn’t like about the night was that our server didn’t introduce or explain our dishes to us.  Instead, it was simply, “Here’s the beef.  Here’s the chicken”.  I noticed that our neighbours next to us had a server who very thoroughly explained very single ingredient in the dish to them.  I would have appreciated that kind of service for such a classy restaurant.  I wonder why our server didn’t do that for us?

Terrine: Heritage chicken, leek, pickled turnip, foie gras, sweet potato, and lentil vinaigrette.  This was a very meticulously assembled dish that looked like artwork.  I love dishes that look like this!  I expected the terrine to taste more gel-like and smooth.  Instead, it was more rough in texture than I expected.  I also don’t think I’ve had chicken terrine before.  It’s always been pork in the past which led me to a false assumption about this terrine.

I liked the two dollops of foie gras in the dish.  The sweet potato was crispy like a chip!  The pickled turnip helped to break up the dense mass of the chicken terrine.  In my opinion, the chicken terrine could have used a little bit more flavour as well. 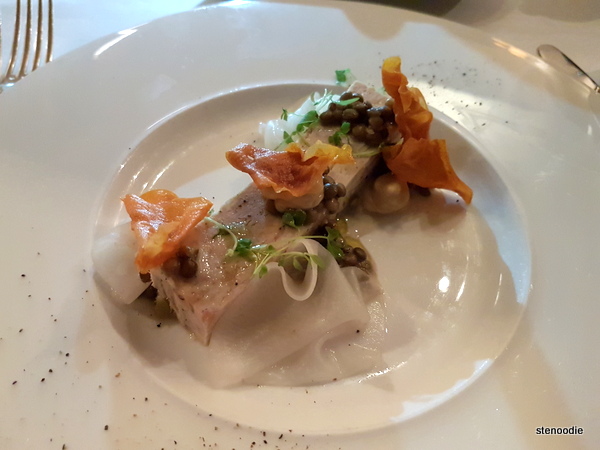 Truite: Smoked trout, wasabi tobiko, cornbread, black radish, green tomato & jalapeño relish, and tomato aïoli.  This was also a really pretty dish and assembled so delicately.  The smoked trout was really tasty!  This dish also had a tarty component to it. 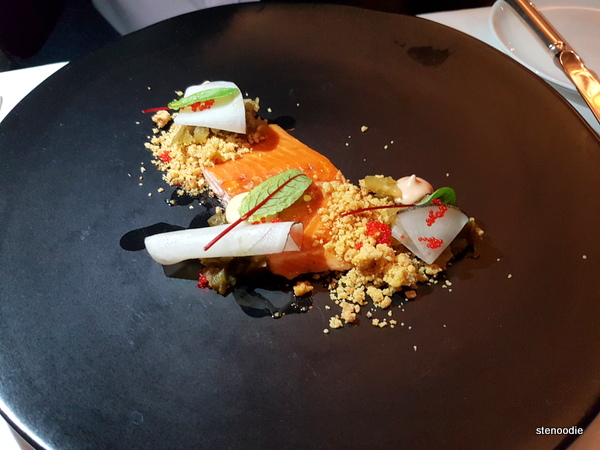 Boeuf: Tenderloin, braised rib, pearl barley, Espelette broccolini, beets, and Cascade hop jus.  This plating was so pretty again!  I liked the smear of the hop jus on the side (which tasted like puréed spinach to me actually).  The best part of this was definitely the tenderloin!  I asked for it to be done medium rare and as such it was so incredibly smooth, tender, and moist!  I loved how tender it was!

The second part of this dish was the braised rib which was also done very well.  It was so fatty and flavourful!  I also liked the pearl barley in this dish. 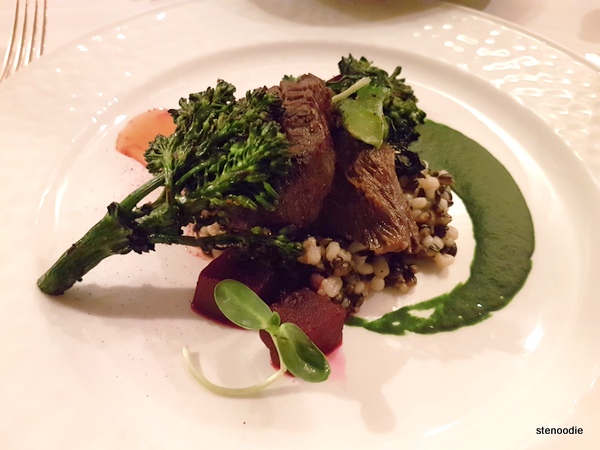 Poulet: Cornish hen, bacon lardon, crushed cocoa beans, courgette fritters, and Jerusalem artichoke.  I liked the bacon part in this and the tenderness of the Cornish hen.  The thigh part of the chicken was much more tender and tasty than the breast part (it came as two parts on the plate).  Ken liked the crispiness of the fritters. 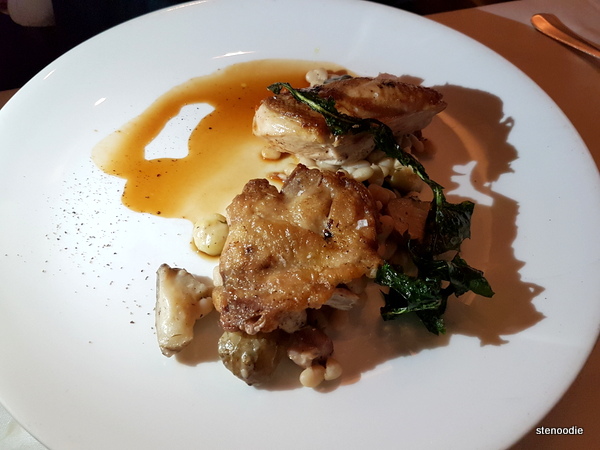 Tarte: Salted caramel & chocolate, crème de cacao Chantilly, and rum raisin crumble.  Mmm, this was a really good dessert!  This chocolate tart was made with high quality dark chocolate.  It was detectable from the first bite with it being so dense and bitter.  It was amazing.  I couldn’t taste the salted caramel too much though.  I also found the cookie part of the Tarte way too hard to break apart when I tried to eat the filling of the tarte together with the tarte itself.  The vanilla ice cream on top of it was a great pairing.  The rum raisin crumble was really good as well; slightly sweet but chewy and a good addition to the dessert’s textures. 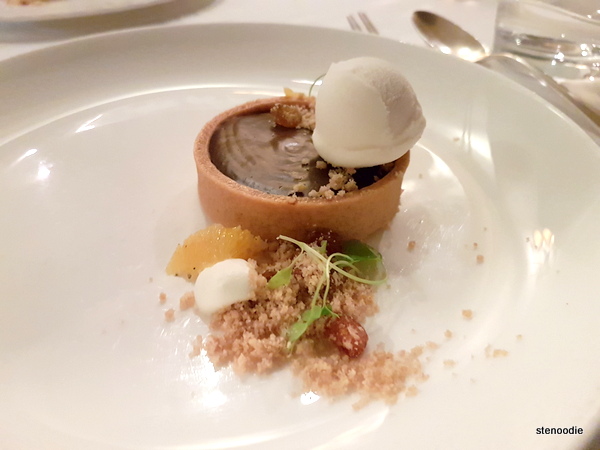 Gateaux: Olive oil cake, vanilla mousseline, wintergreen fennel, green apple sorbet.  I’m always curious about olive oil cakes (having now had several in my foodie lifetime).  The portion of this dessert was smaller than the Tarte.  I think they could have made this olive oil cake a little thicker and bigger.  The green apple sorbet was refreshing and the fennel reminded Ken of more of a summer dessert or appetizer.  Its light taste also contributed to that feeling. 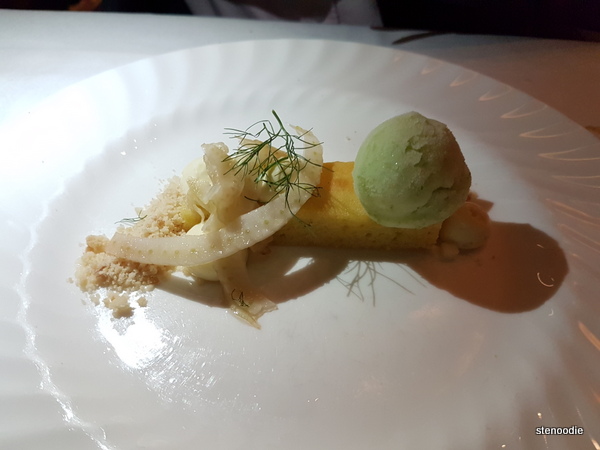 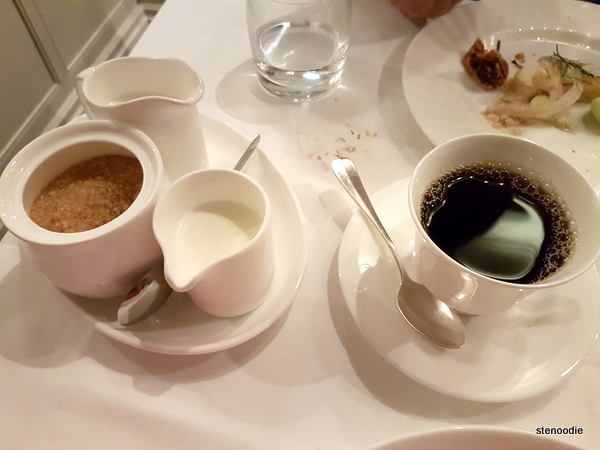 This was my view from my seat.  We were seated in the corner of the restaurant which offered plenty of privacy (but not conducive for people watching). 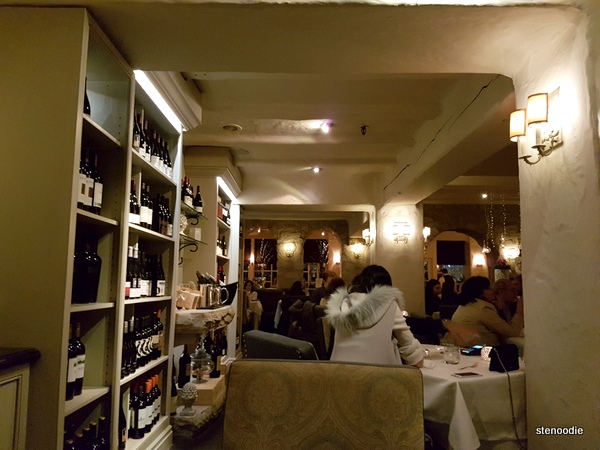 View from my seat

The walls and brick components of the restaurant lent itself to a really historic and characteristic beauty. 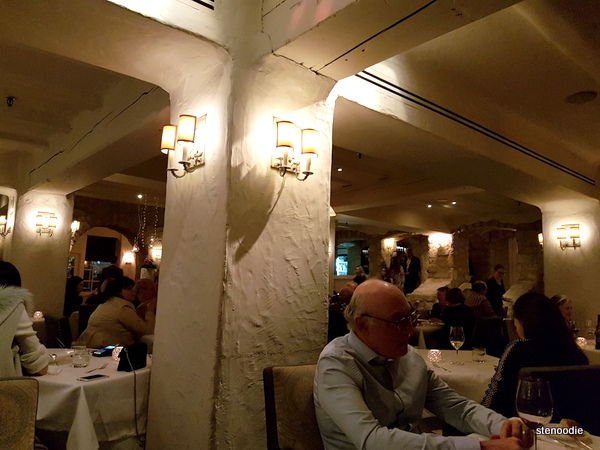 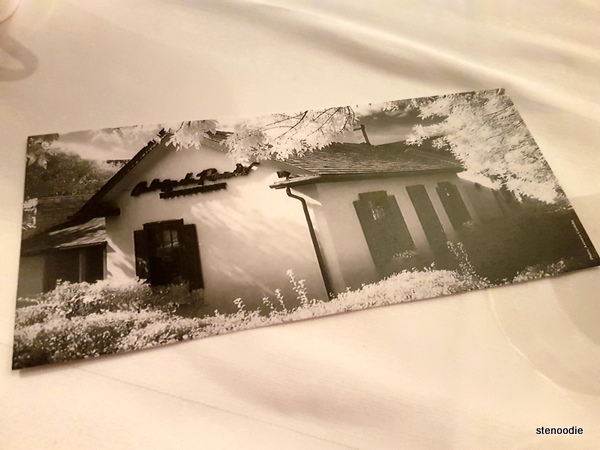 What the restaurant was brought over from 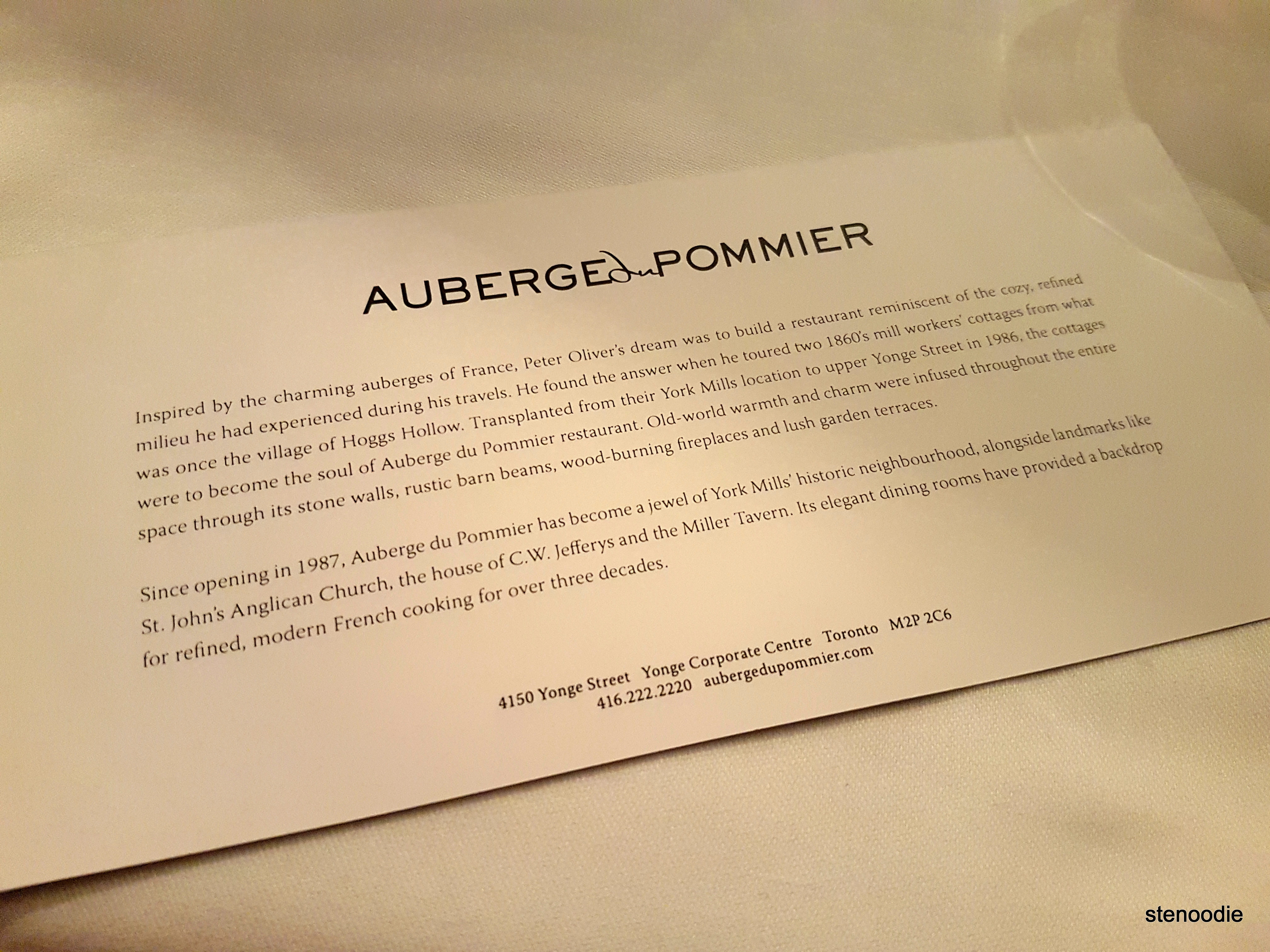 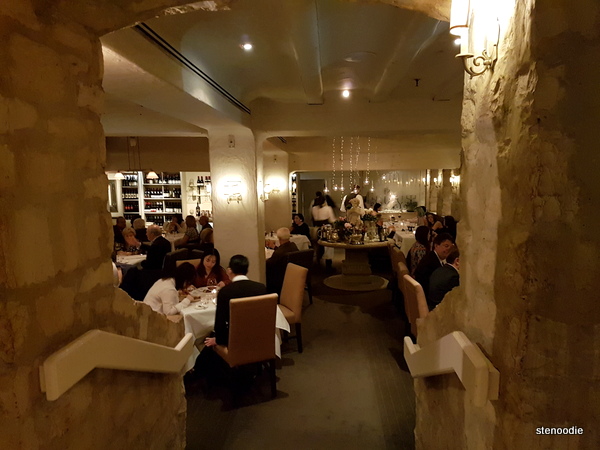 The view from the doorway 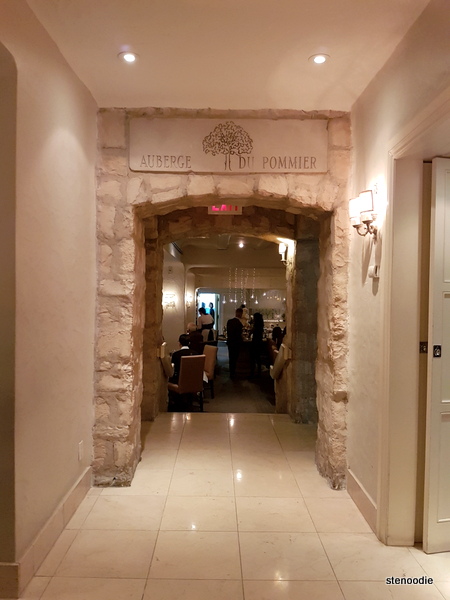 To the right is the coat check 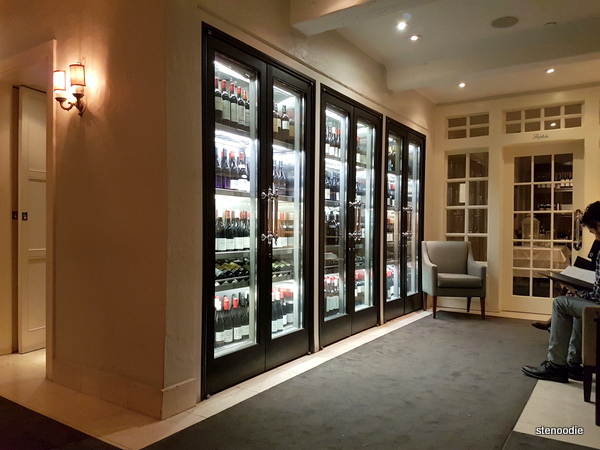 It was a really nice French dinner.  I only wish our experience was elevated a little more with even better service.  I think service with 110% more effort from our server would have made the meal even more special.  Regardless, I’m still really grateful to finally have tried Auberge du Pommier out! 🙂 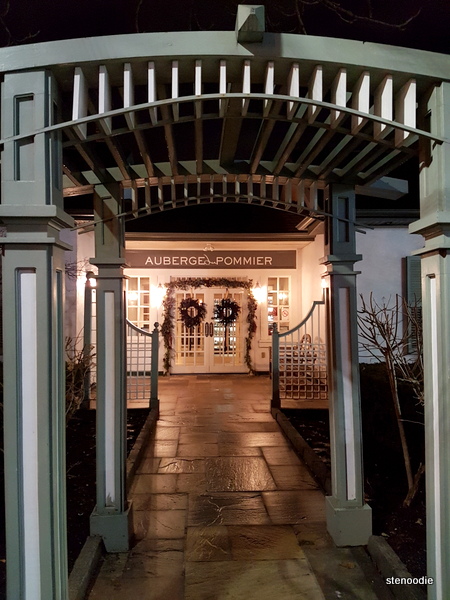