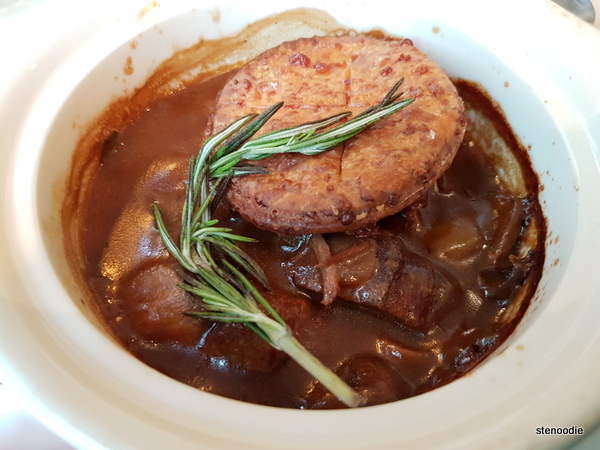 February 1, 2018: Betty and I had lunch at The Queen and Beaver Public House.  We came here for their winterlicious lunch menu.  I had picked a number of contenders for our lunch but since this one was closest to her workplace and Betty hadn’t had British food before, this one won the lot.

I called the restaurant to make a reservation for a 1 p.m. lunch the day before.  I arrived at 12:50 p.m. and the gentleman at the front warmly greeted me and led me to my table that was in the front area of the restaurant.  It was a gorgeous dining room with curtains and brick-exposed walls and wooden furniture.  Our table was a marble top.  The entire space felt so warm and “British”.  I really liked the space. 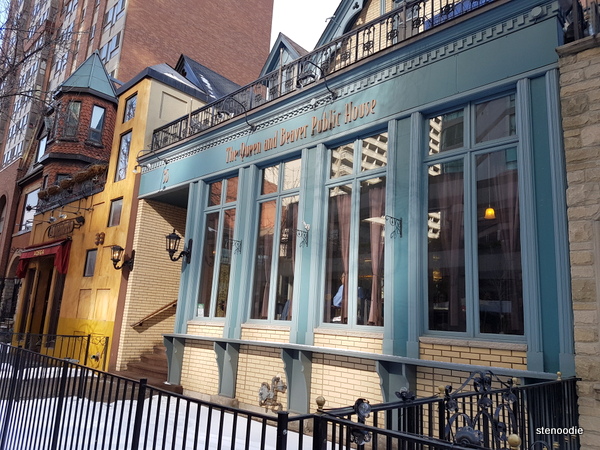 Such a nice restaurant storefront 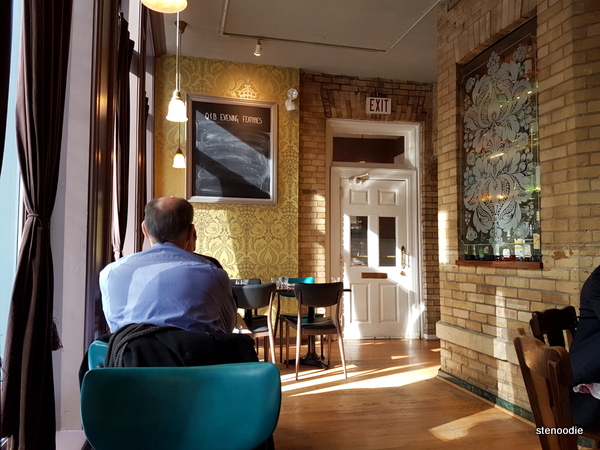 I really liked this dining room!

It took Betty a bit of time to arrive since she couldn’t find parking.  While waiting, the server served me the menus and my water.  She was very pleasant and warm throughout the visit.  After Betty arrived, we were very quickly able to determine what we wanted to order from the winterlicious lunch menu.

As I mentioned in my other Winterlicious 2018 post, the prices for this prix fixe seasonable food event have risen.  I remember the old days when the ‘licious lunch prices used to be $15.  Then it was increased to $20 and this year, the price is $23. 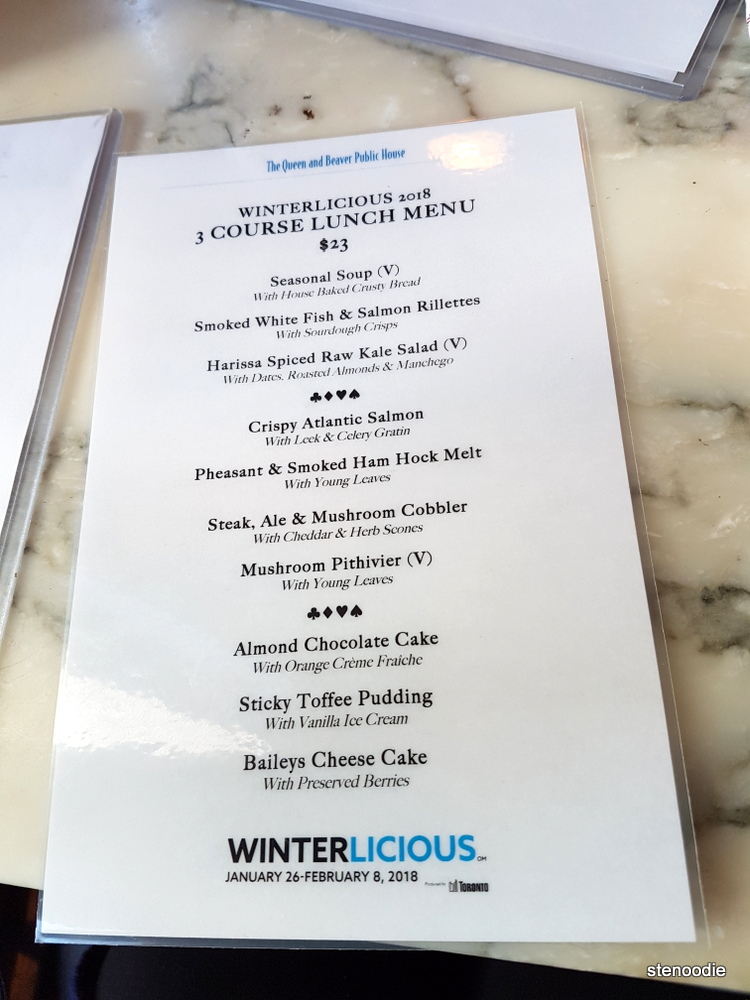 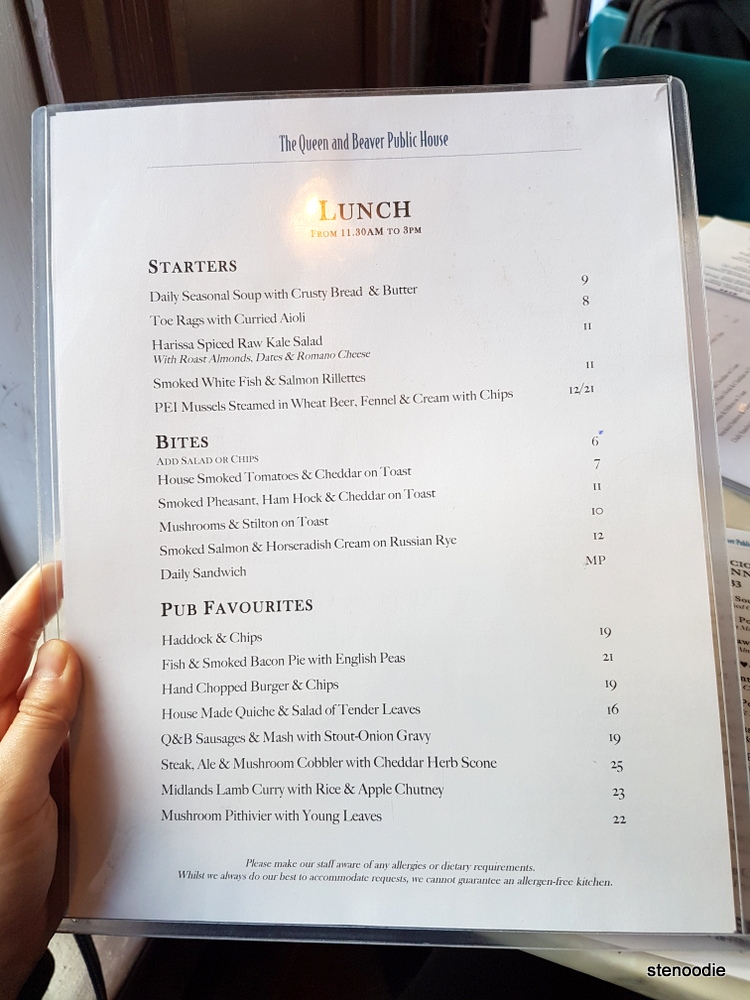 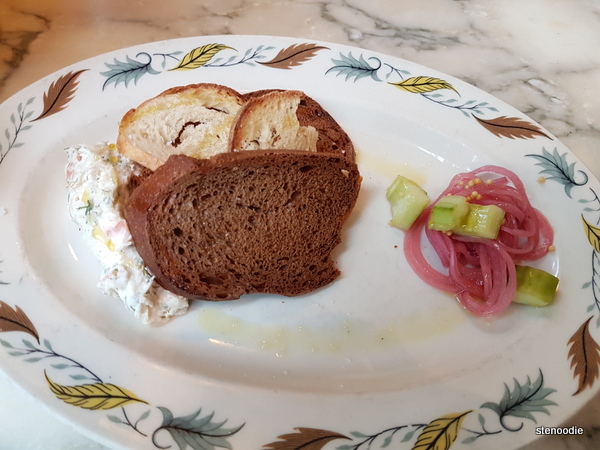 Our appetizers arrived very quickly.  We both chose the Smoked White Fish & Salmon Rillettes that came with sourdough crisps.  I hadn’t had rillettes before which is kind of like a fish pâté — I’ve only had meat pâté up to this point.  The smoked white fish and salmon rillettes were mashed together and looked like a dip or spread.  There was a pickled onion and cucumber salad accompanying the dish too.  The plate was really pretty. 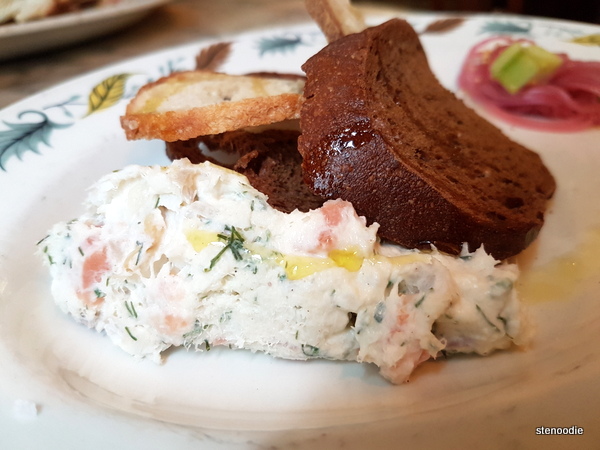 The rillettes were hiding under the sourdough crisps 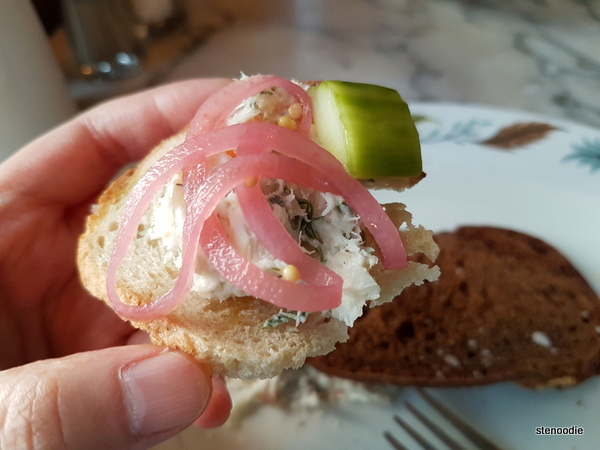 Is this how you eat it? XD 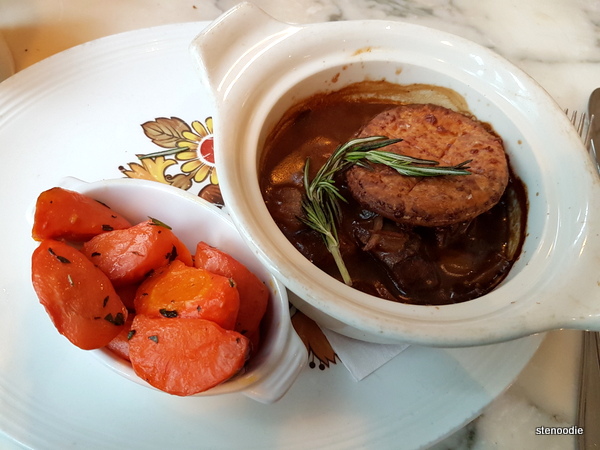 Steak, Ale, and Mushroom Cobbler
-with cheddar and herb scones

As it happened, Betty and I also chose the same entrées (I liked that their Winterlicious lunch menu had a choice of four options).  We chose the Steak, Ale, and Mushroom Cobbler with cheddar and herb scones.  It arrived in a nice presentation.  There was a grouping of steamed herbed carrots to the side which I really enjoyed.  I liked how the carrots were steamed firm yet tender.

The cheddar and herb scone was actually smaller than I thought.  I thought it would have covered the width of the bowl.  It was so small that it sunk into the broth/gravy and looked like a biscuit instead.  I was surprised that this dish wasn’t served with mashed potatoes or roasted potatoes because the generous amount of gravy in the dish would have called for something carby to eat with — at least that’s what I would have preferred since I like dense good-tasting gravy such as this one.  I couldn’t really discern the ale in the dish, but the steak and mushrooms were there.  At first I thought the steak bites were going to be actual steak pieces but they were more of the cheaper variety of just beef chunks.  I don’t think I can call beef chunks as ‘steak’.  Another reason why I would have preferred some mashed potatoes or potatoes to go with this dish because the gravy was quite salty at times.  A little carbs would have masked and/or neutralized the saltiness.

I notice that they serve the Cobbler also in their Winterlicious dinner menu.  For lunch, this was a good portion but if I got this portion for dinner, I’m not sure if it would have been enough — this is on the assumption that dinner portions should be larger than lunch ones.

For the dessert component, we chose the Almond Chocolate Cake and the Sticky Toffee Pudding to share. 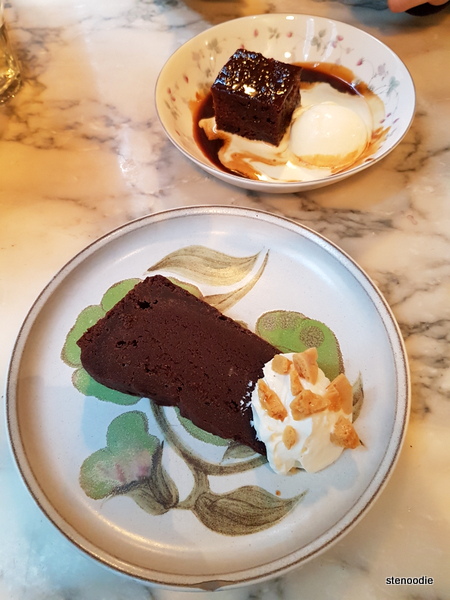 The Sticky Toffee Pudding with vanilla ice cream looked nice with contrasting dark and light colours.  The sticky toffee pudding at first bite was really sweet (probably magnified after the salty cobbler) and the vanilla ice cream was even sweeter than I almost choked on the sugar content.  However, after a few bites it didn’t taste as sweet anymore.  The sticky toffee pudding was okay. 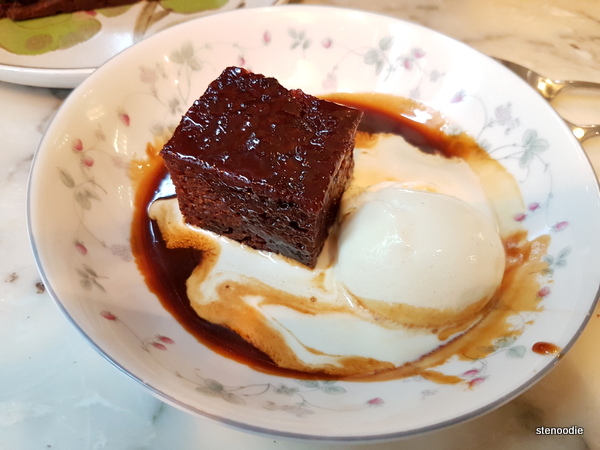 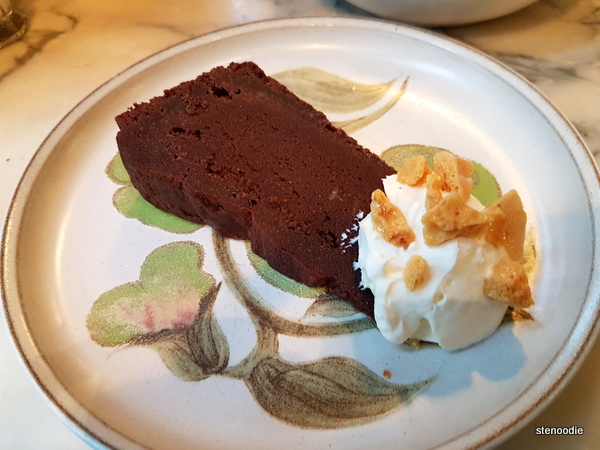 All in all, I thought that the food at The Queen and Beaver Public House was good but not outstanding.  It was better than average especially in terms of how they presented their food.  I liked their plates!  I also really appreciated the warm and friendly service that the staff showed towards the customers.  It was definitely a bonus. 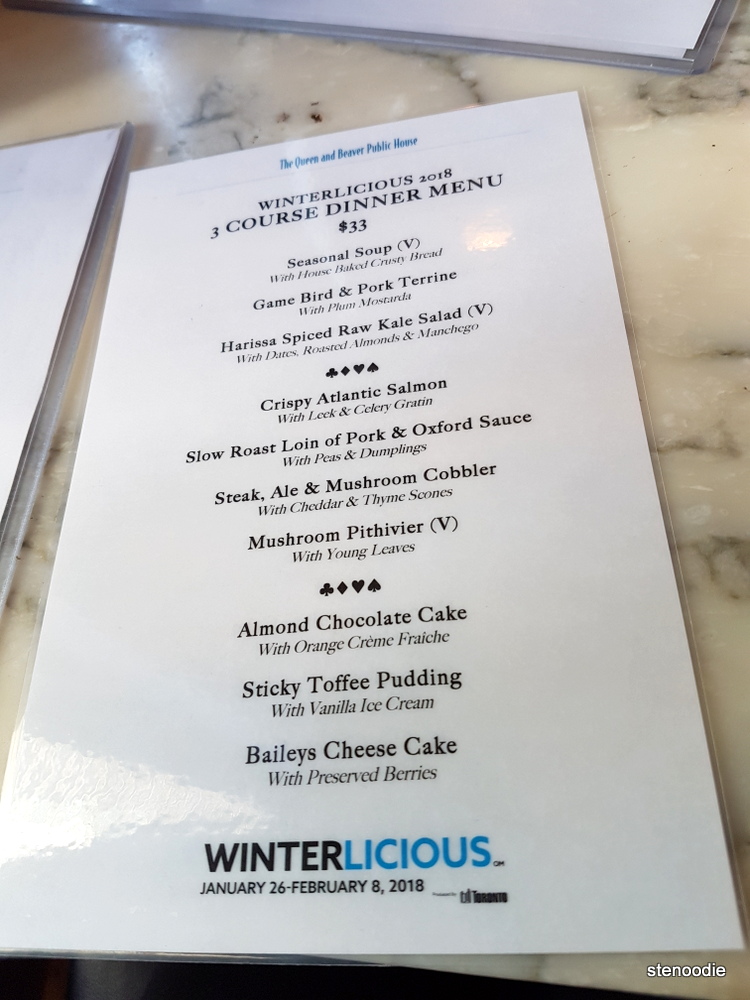 Another note (not about The Queen and Beaver Public House at all) is that since the ‘licious food event have raised their prices this year, I’m not sure if it’s so worth it anymore to pay $30ish after tax and tip for a lunch (albeit three courses)…  Why is everything going up in price but our wages aren’t?  (And I’m not talking about the minimum wage.)

2 Responses to Winterlicious 2018 Restaurant #2: The Queen and Beaver Public House