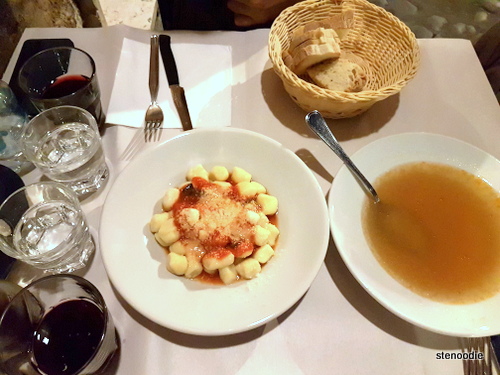 September 6, 2018:  Our BnB host highly recommended Trattoria da Augusto for an authentic “down home cooking kitchen” experience.  We were certainly up for it and put it on our itinerary for the last day.  Unfortunately, Trattoria da Augusto‘s dinner service didn’t begin until 8 p.m.  We wandered around the neighborhood of Travestvere before arriving at the doors at around 7:15 p.m.  (They have lunch service from 12:30 to 3 p.m. and had we realized this ahead of time, we would have arrived for lunch instead.) 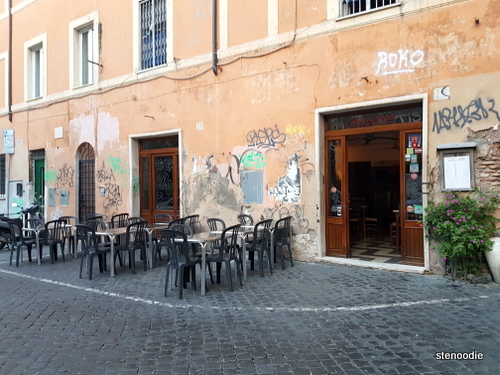 Trattoria da Augusto was located inside of a building that looked worn down with graffiti on the walls.  We studied the menu on the door.  Their door also included many accolades from over the years. 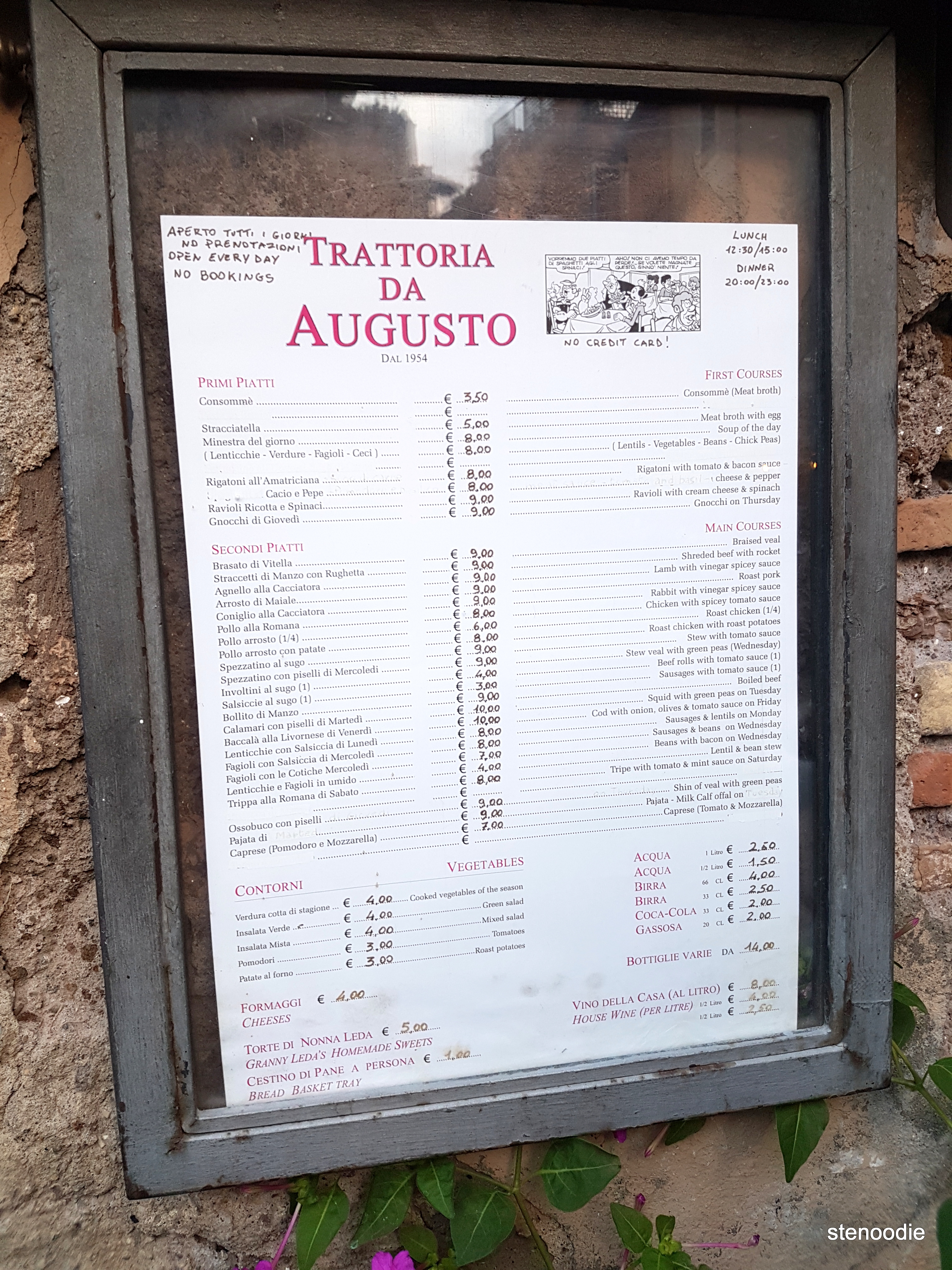 Menu on the wall 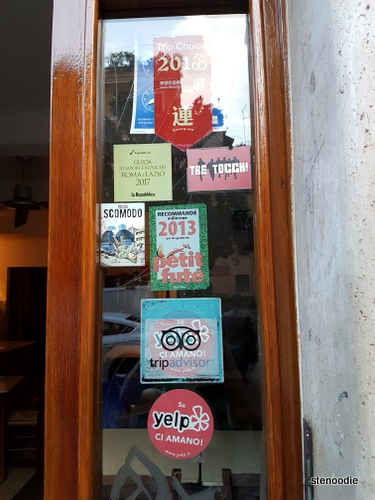 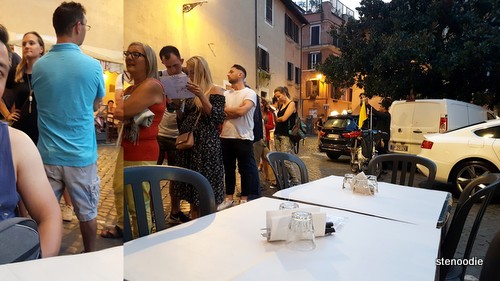 The line-up at ten minutes to opening

We knew we were super early, so we simply sat at one of the patio tables to wait.  The staff started setting the tables by 7:30 p.m., distributed the menus, and acknowledged our presence which was a good sign despite our own initiative to seat ourselves.  By 7:40 p.m., a line had begun to form and we knew we were in for a treat (as I noticed the menu stated “no reservations”) and a huge line-up was itching out the street. 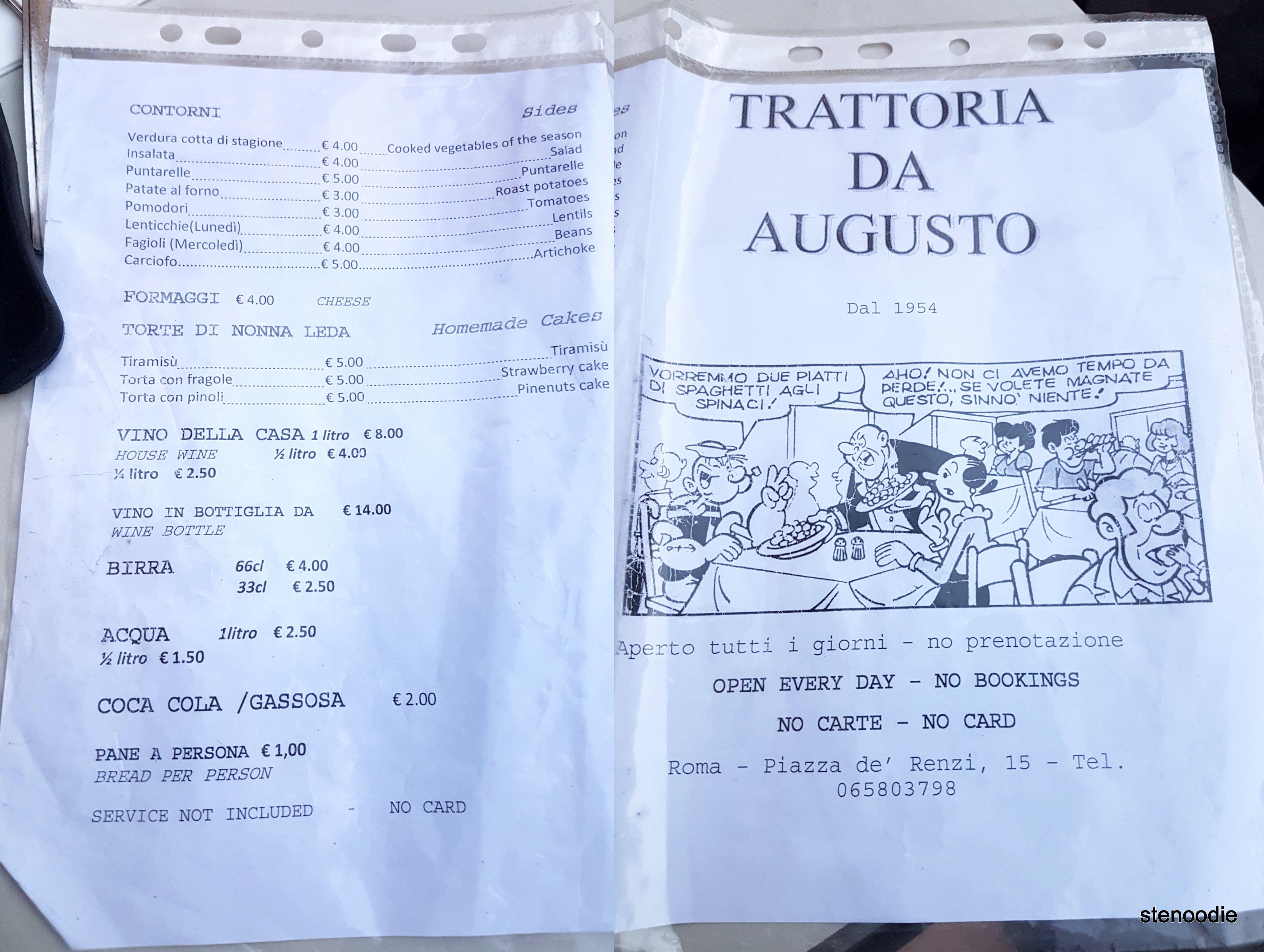 Menu cover and menu for sides, desserts, and drinks 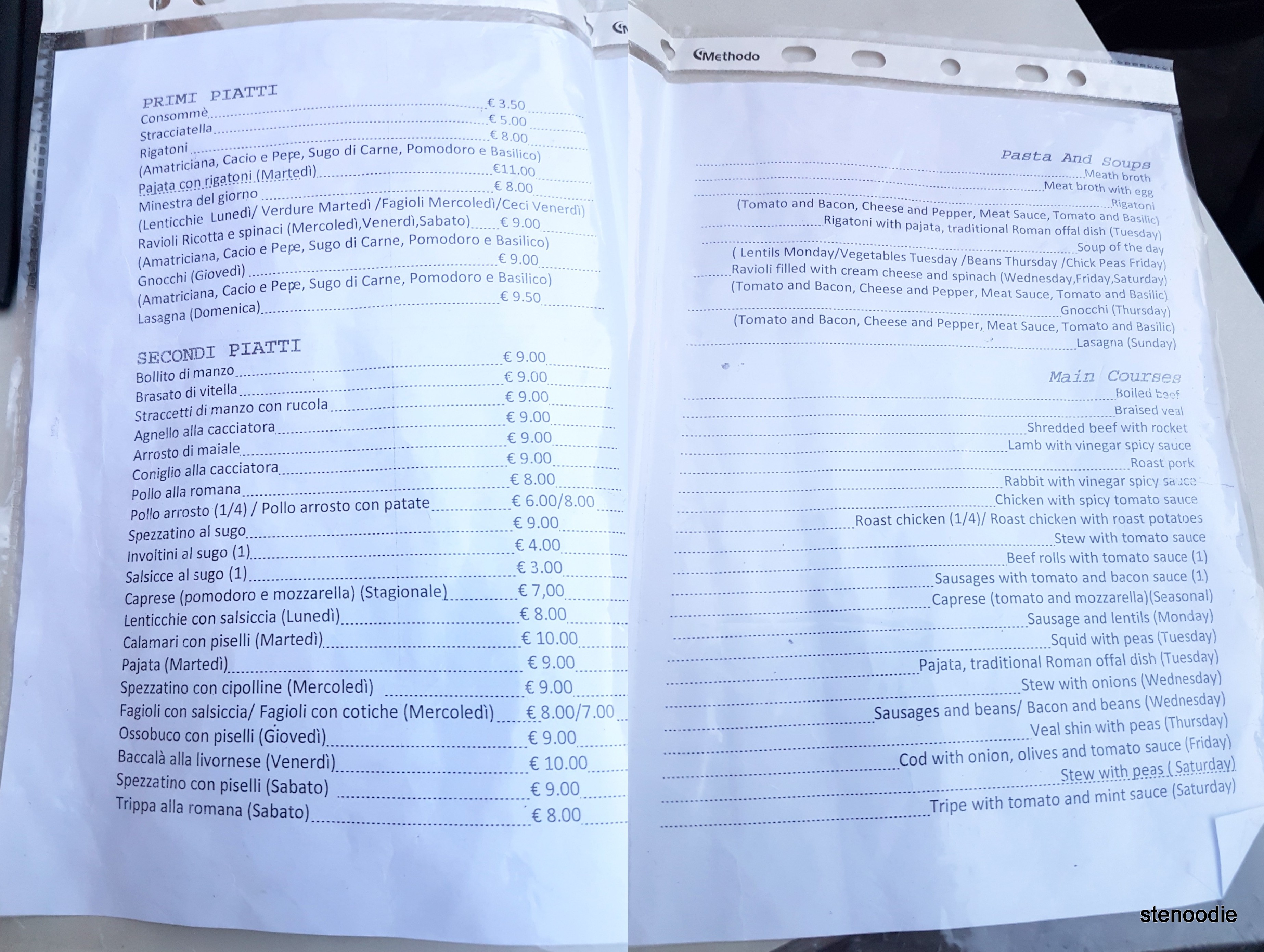 By 8:01 p.m., the door to the restaurant officially opened and the guests were ushered to take an indoor table or patio table like us.  The server then took our orders quickly.

We had a quarter litre of red wine, consommé (meat broth), gnocchi (only available on Thursdays), rabbit, sausage in tomato and bacon sauce, and a pinenuts cake at the end. 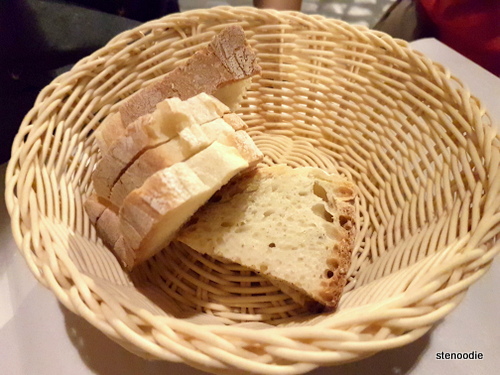 The Vino Della Cassa red wine here was mediocre.  I still have fond memories of the 0.5 litre of house red wine we had on our first night here. 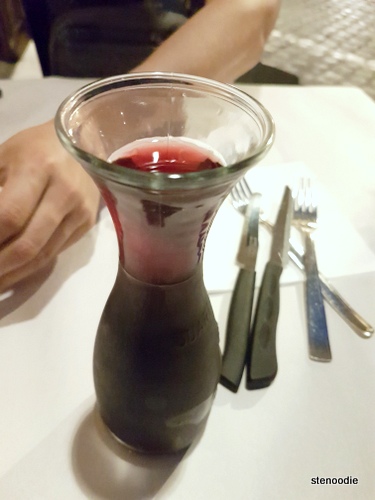 The Consommé was a clear soup with strong tones of meat in it.  It was smooth and flavourful but not fatty. 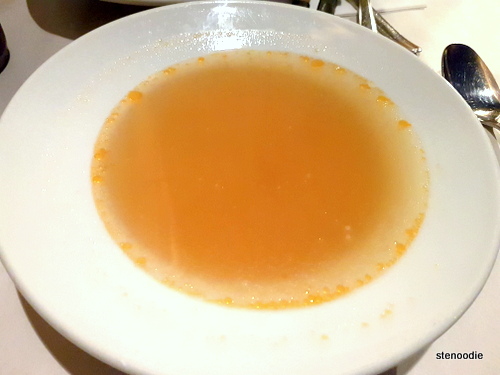 The Gnocchi (which we took advantage of ordering since they only serve it on Thursdays) was incredibly soft and pillowy with no traces of extra dough anywhere.  Ken really enjoyed it. 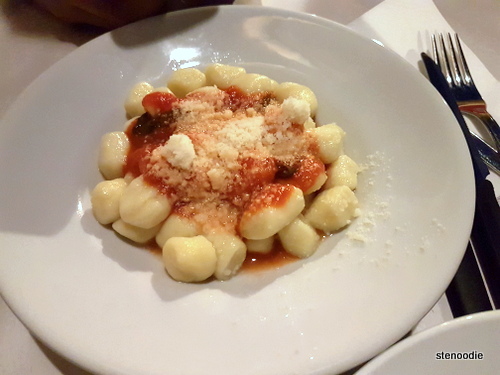 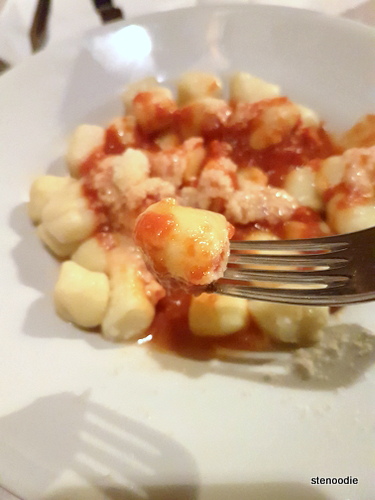 The Coniglio alla cacciatora (Rabbit with Vinegar Spicy Sauce) was a bigger portion than I expected with lots of thigh and meat.  It came by itself with some herbs.  Ken loved this dish incredibly so.  The rabbit meat was dense and full of flavour. 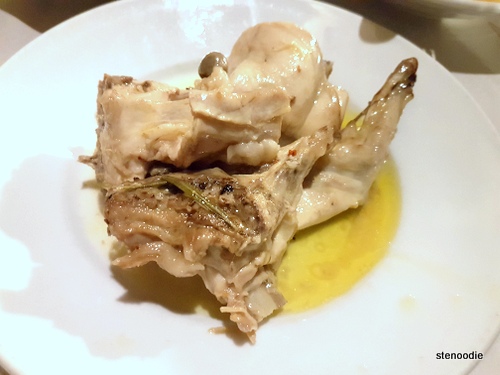 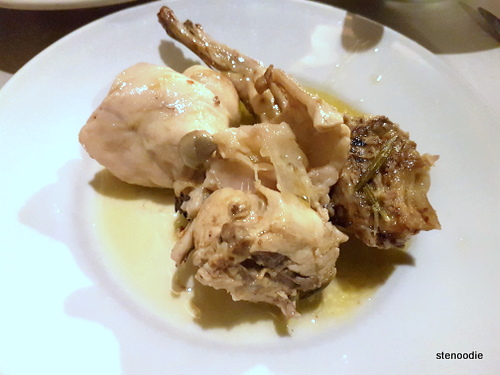 Another angle of the hunter’s rabbit dish

The Salsicce al sugo (sausage) arrived as is on a plate of tomato and bacon sauce.  The sausage was akin to meatball texture and wasn’t fatty or chewy at all.  I quite liked the meat of this sausage. 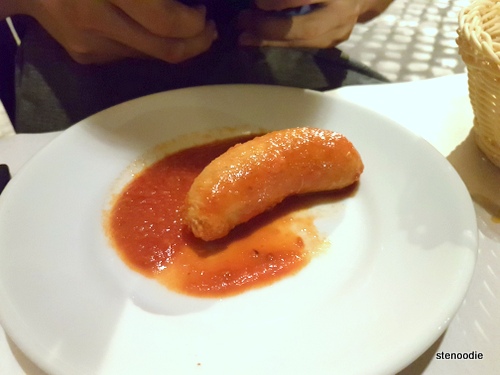 We originally ordered a dish of Puntarelle (a variety of chicory that we loved last night).  However, after waiting for it to arrive and it never did, when we asked the server about it, the server told us that puntarelle was actually not currently in season. 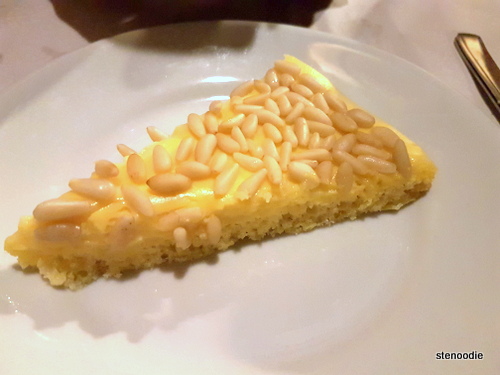 We ended off the meal with the Torta con pinoli (pinenuts cake).  I had never had a cake dedicated to pine nuts before, but this was exactly what it was.

It was a crust-less custard and soft cake topped with pine nuts.  These pine nuts were the softer type and broke up the sweetness of the custard.  It was an incredibly unique dessert and one that I was so glad I got to try.  I’ve never encountered such a dessert back home before.

Before and after dinner, there were entertainers for magic and music on the streets.  Lots of people tried to sell me flowers (I counted three tonight) — a common occurrence of dining in Italy, I have learned. 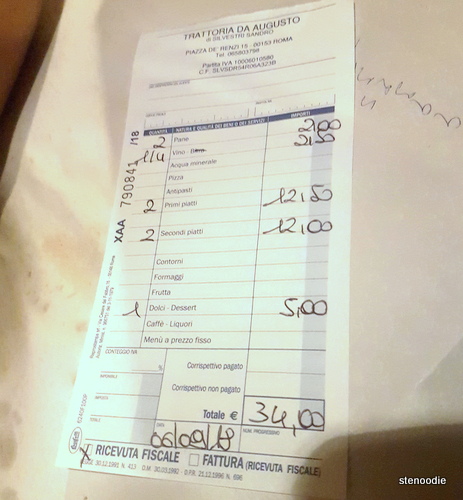 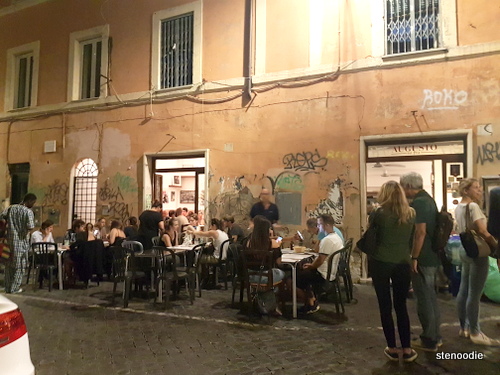 There was still a line-up of customers waiting to be seated when we left at 9:40 p.m. 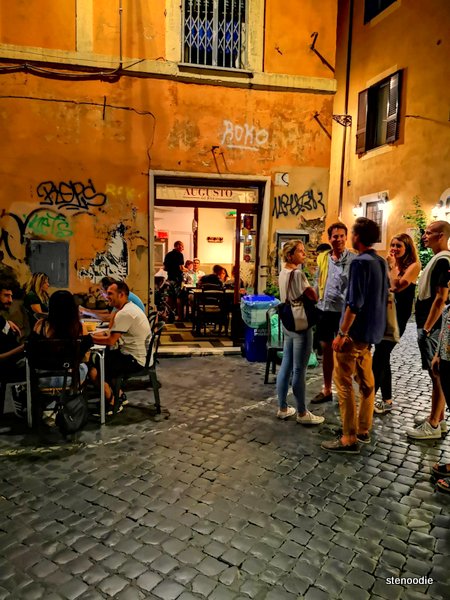