Dining at Campagnolo before it closes on June 1, 2019! 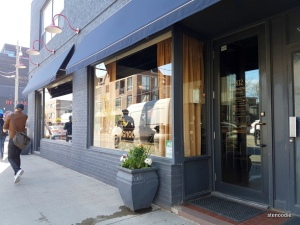 May 21, 2019:  It seems like a number of well-established restaurants are closing this year in Toronto.  The next one to bite the dust is Campagnolo, a sophisticated Italian restaurant on Dundas Street West.  I remember passing by this corner restaurant numerous times when I was walking down this street.  The logo of their restaurant name on the glass windows was something I noticed every time I passed by.  It seemed like such a classy restaurant and one that I had wanted to visit for a while.

Little did I know that this would be my first and last time visiting Campagnolo since they are closing on June 1, 2019.  Thanks to Anh, we were able to book a table for three here for dinner.

I arrived just before 6 p.m. on a Tuesday, and the restaurant was already alive with guests dining in.  The bright sunlight streaming into the restaurant brightened up all of the chandeliers and chic furniture in the restaurant.

To my surprise, the menu was a tad smaller than I expected.  It also seemed that they did a rotating monthly menu.  We picked a number of items to share from their dinner menu.

The dishes all arrived in a reasonable amount of time.  I was so excited to try out the food!

(Unlike most Italian restaurants which serve complimentary bread, their house-made sourdough bread cost $5.  We didn’t opt for any.) 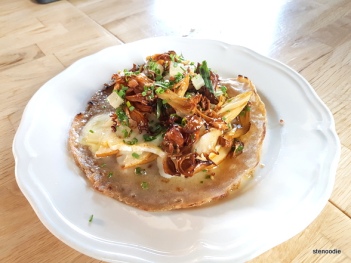 The first dish to arrive was our appetizer, the Mushroom & Taleggio Crêpe.  This was a beautiful layered dish.  I didn’t expect the crêpe to look like this at all!  It had hazelnut crema, bartlett pear, and maitake mushroom.  I tasted the mushrooms as well the thinly sliced potatoes and pears.  It was definitely a unique dish that I’ve never had before.  This was my favourite appetizer of the night!

Close-up of the crêpe

The second appetizer was the Roasted Bone Marrow with oxtail marmalade and plums.  This was a gorgeously presented dish.  There were nicely toasted crostini set next to the sizable bone.  Unfortunately though, I thought that while the flavour of the oxtail was delicious, the bone marrow itself lacked marrow — and generous fatty marrow is the main part of the dish!  There was indeed a lot of meat on the bone if you like your bone marrows with meat.  The diced plums were a good contrast against the meat.

So much meat on the bone marrow! 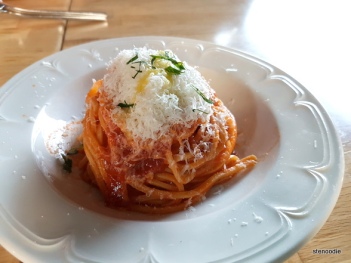 Next up, we had our spaghetti dish.  The Spaghetti all’amatriciana was simply a serving of spaghetti with tomato sauce, cheese, and olive oil.  It reminded me immediately of the simple yet delicious pasta I’ve had in Rome.  Indeed, the simplicity and deliciousness was exactly like the authentic Italian pasta I’ve had in Rome.  The spaghetti itself was different in the sense that it tasted grittier and was square-shaped instead of the usual round spaghetti strands.  It was so delicious, and I wish I had more.

The two meat dishes were a tad disappointing, taste-wise.

The Roast Duck Breast was yet another beautifully presented dish with the daikon sliced like a blanket covering the grilled and fermented romaine.  The apricot “agro-dolce” sauce appeared like a freshly cracked egg yolk on the plate.  The duck breast meat wasn’t tender or moist enough for my taste and in fact was a bit on the bland side.

The Dry-Aged Beef Loin held up the high presentation standard with a cluster of broccoli florets between sliced red pepper on the side of the plate.  The beef loin was also a bit bland for my taste (also, the portion of the beef loin was rather small).  The purée in the dish was delicious. 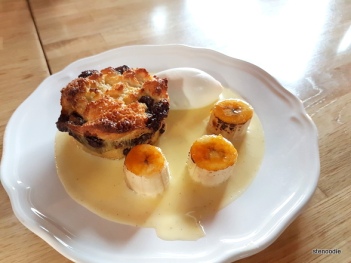 The Warm Bread Pudding arrived with a quenelle of creme anglaise on the side and brûléed bananas on the plate!  It was so creative and beautiful.  The bread pudding itself was baked with dark chocolate.  The dark chocolate was the really rich bitter variety — I loved it.  I also liked how the surface of the bread pudding itself was a tad crispy while the rest of it was moist, warm, and so delicious.

This might have been one of the best bread pudding I’ve ever had!  The creme anglaise was rich and smooth, and the brûléed banana was such a genius idea.

The second dessert we had was the Pavlova.  This had a strawberry and orange blossom cream.  It was sophisticatedly served with a medley of fruits on the side while the white shell pavlova contrasted against the red colours.  The crispy shell was definitely sweet enough and perfect for those looking to fulfill their sweet tooth.

I later found out that their Fresh Burrata Cheese was a popular dish.  Their other pasta dishes like the Spring Pea Agnolotti and Mushroom & Ricotta Cannelloni would have been great choices to try as well (they simply did the Spaghetti all’amatriciana so well!)  It’s too bad that this gem of a restaurant is closing down after nine years in business.  They will be missed for sure!  (Apparently, they are closing down to focus their time and efforts on their two other restaurants.  They also already have shut down their Twitter account ahead of the closure.)

Dining room after the sun had gone down

Have you been to Campagnolo before?  If so, what was your experience like?  If you try really hard, you *may* be able to get a table before they finally close on June 1, 2019.  It’s worth trying anyway if you want to check them out.