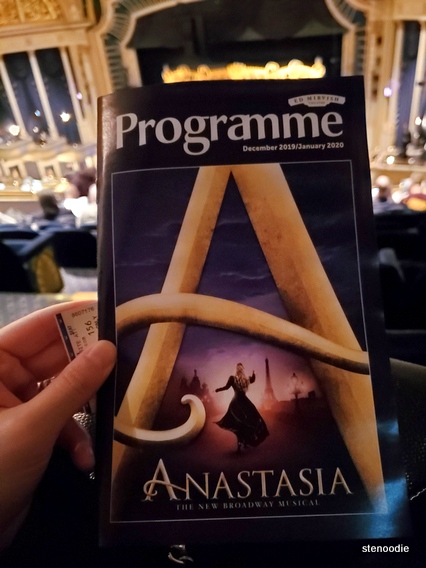 Anastasia the musical at the Ed Mirvish Theatre in Toronto

Is it really fair for me to “critique” this musical when I actually didn’t view the whole thing properly?  Anyway, here was my experience on it.

The musical “Anastasia” is based on the animated movie released in 1997 and:  “adapts the legend of Grand Duchess Anastasia Nikolaevna of Russia, who could have escaped the execution of her family.  Years later, an amnesiac orphan named Anya hopes to find some trace of her family by siding with two con men who wish to take advantage of her likeness to the Grand Duchess.” (summary from Wikepedia)

It is currently showing as the Canadian premiere from December 3 to January 12, 2019 at the Ed Mivish Theatre in Toronto.  We watched this on December 4, the second day of the run.  Surprisingly already both the role of Anya and the role of Gleb were already performed by their understudies (did they get sick already on the second day of the show?).

I never watched the animated movie when I was a child, so I didn’t know what I was going into (I think this affected my experience as well).  We sat in the Mezzanine in one of the last back rows. 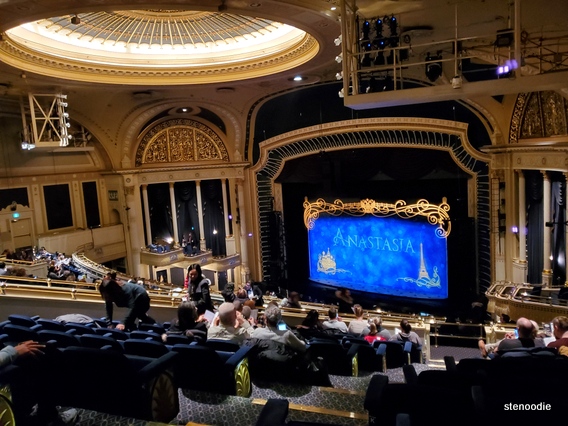 View from our seats

Perhaps I was overworked and more tired than I thought but I actually fell asleep multiple times during the musical.  Thus, I missed bits and parts of each scene in both Acts 1 and 2.  This is the main reason why I thought the musical was so-so.  The music was generally slower and more “moody”.  All of those things (being tired, sitting in the back row, slow music) possibly affected my experience of the musical.  (I sat on stools when I watched Wicked in the same theatre [it was called the Canon Theatre back then] which was in the very back of the theatre too but Wicked remains my top second favourite musical of all time, so it really depends on how captivating the musical is to me and not where you’re seated in the theatre and I didn’t think Anastasia was that captivating for me.)

Thankfully, I didn’t miss the “Journey to the Past” scene (song attached here for you to enjoy) because this was the highlight.  While we had the understudy of Anya (Taylor Quick) perform that evening, I really liked her voice and singing.  She performed this scene beautifully.  Her voice reminded me of Elle Woods in the Legally Blonde musical.

Positives:  The set design and visuals on the stage though were stunning.  I liked how they used tall giant columns to illustrate the characters being in the palace.  It was so grand and the optical illusion of the “floors” on the stage from our seats made it look so realistic.  The costumes were also great.  Talent and singing of the entire cast were also to be commended.

Also, the ballerinas who performed were spectacular as well.  They received their own set of applause.

My experience also makes me want to watch this musical a second time to judge it more fairly.  A second re-visit of the musical would mean that I’d have a full 7 hours of sleep and a closer seat in order to see if it is really the musical that I didn’t like or my disposition at the theatre which affected my experience…  I also don’t know if I want to pay a second ticket to see this in case I come away with the same findings.  (Mirvish staff, if you read this, do you want to sponsor me for a second viewing? XD  Joking, but not really. 🤭)