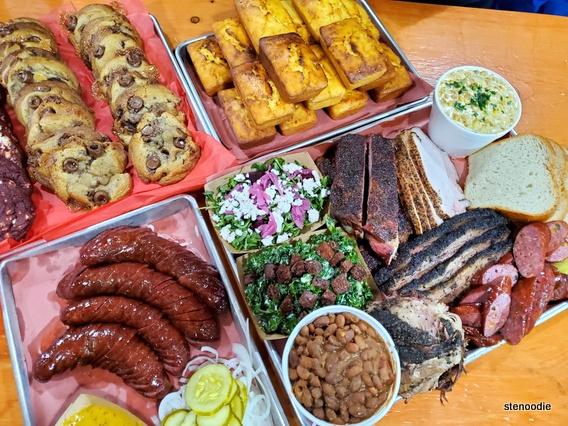 January 30, 2020:  I have to be honest (when am I ever not in these recaps?), but this was probably one of the most uncomfortable tasting events I have been to in recent memory.

Recs Media has invited me several times in the past to attend tasting events and while I had wanted to attend some of them, I was mostly unavailable due to scheduling conflicts.  Finally though, Sumaiya extended an invite to me where I was both available and also interested in the restaurant.  I had heard about Adamson Barbecue (176 Wicksteed Ave, East York) for many years and always wanted to try out their infamous sold-out- daily Texas-style slow-smoked meat and classic sides.  I was really excited to have the opportunity to try them out thanks to a complimentary tasting event. 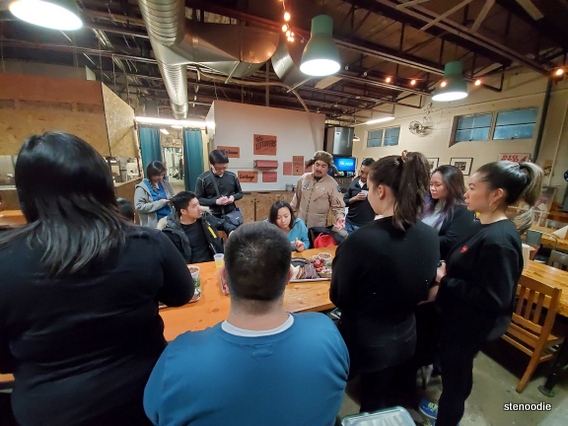 First glimpse of the event upon arrival

The tasting was scheduled from 6:30 to 8 p.m. on a Thursday evening.  It just so happened (all of days) that my steno job ran overtime (which happens once in a blue moon), so I was running a bit late.  I messaged Sumaiya at 6 p.m. letting her know that I was on my way but that I was going to be late.  She said no problem and to see me soon.

When I arrived at the restaurant located in an industrial neighbourhood, it was 6:45 p.m.  I was lucky enough to arrive just in time as the platters of barbecue food was put out on display and one of the staff members was explaining to us the background of the restaurant and about the items.  There was a long table set up in the cafeteria style no-frills dining room and already the 14 or so other food instagrammers had taken a place at the table and ready to photograph the food. 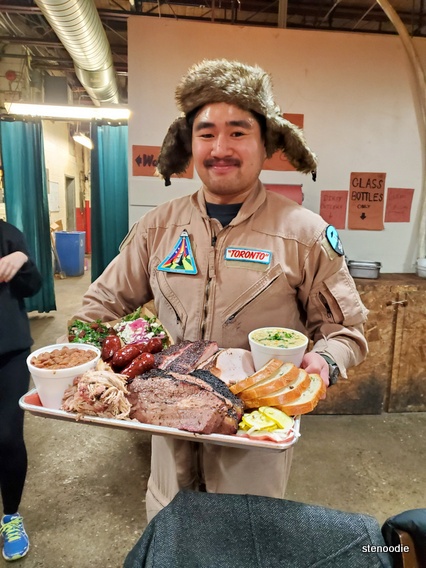 Service manager Joey at Adamson Barbecue ready for the photoshoot 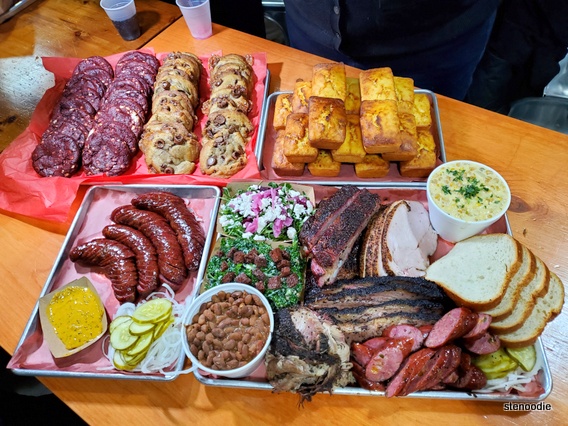 Meats, non-meats, and desserts we were given to try that evening

There was a large assortment of items from the menu on the metal trays.  This included:  brisket, spareribs, turkey breast, pulled pork, sausage for the meats; potato salad, bread, coleslaw, beans, macaroni salad, cornbread for the non-meat sides; two types of cookies,  bread pudding, and a cinnamon toast crunch type type of dessert for the sweets.  It was a truly generous spread and beautifully assembled on red butcher paper or paper trays on top of the metal trays. 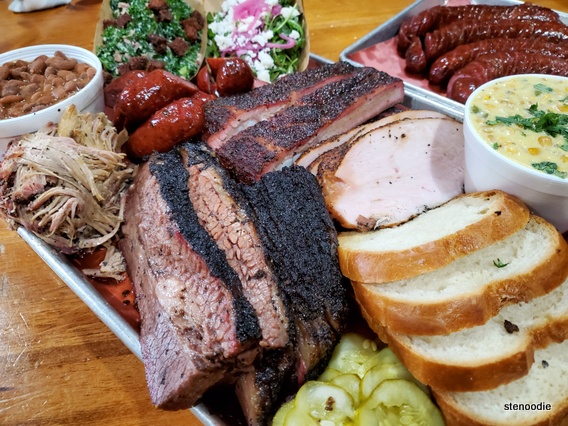 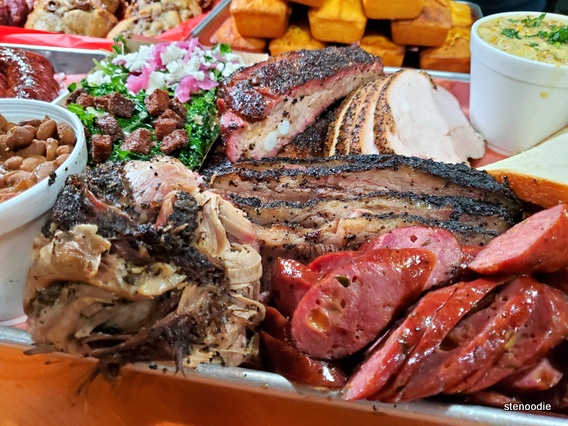 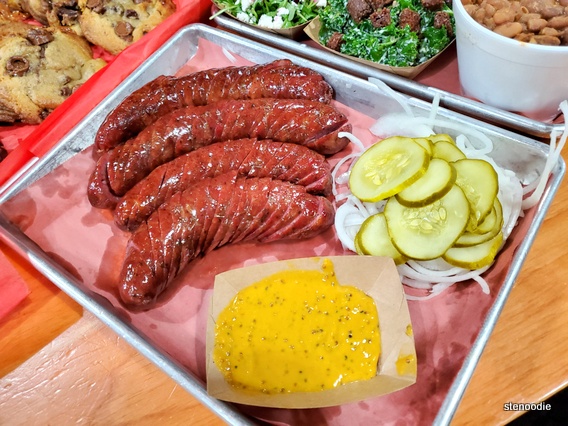 Bratwurst Sausage with pickles and mustard 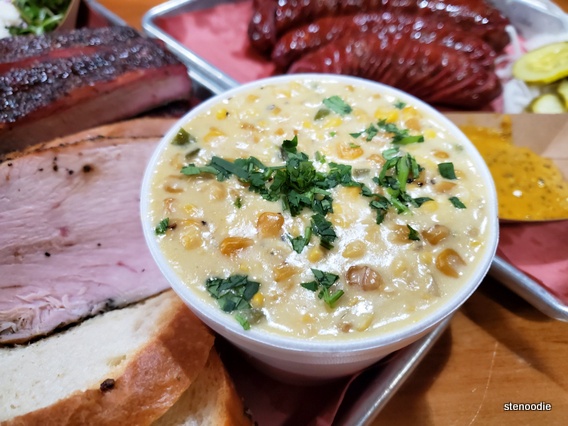 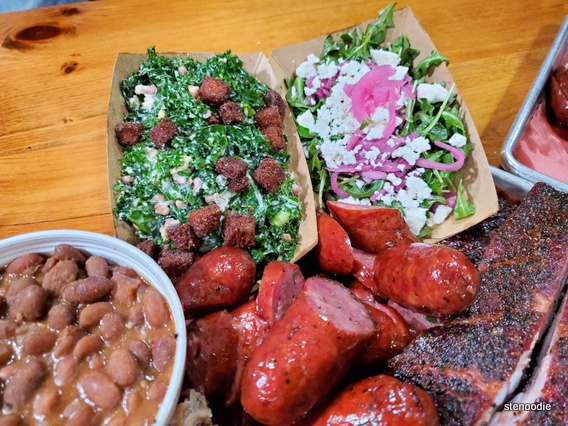 Two types of salad, beans, and another type of sausage 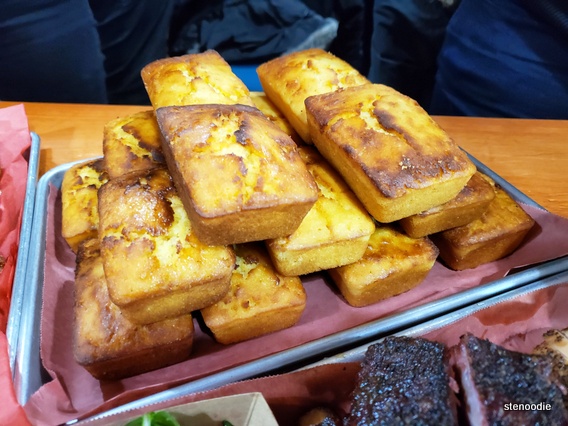 As you can expect from a crowd of food instagrammers (the majority of Recs Media’s invitees were food instagrammers as opposed to food bloggers — please know the difference), everyone was ready with their smartphones in hand to capture the items in all their glory.  Some people brought portable white lights too in order to ensure that the foods were shot in good lighting. 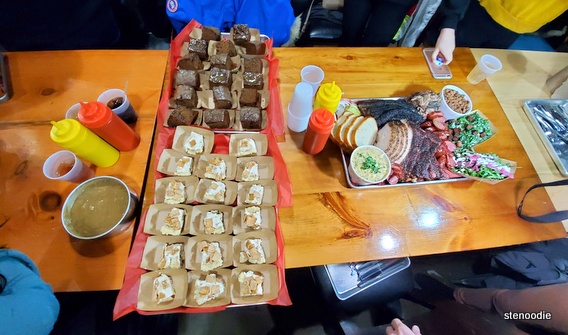 After about 10 to 15 minutes of photo capturing, we were welcome to dig into the platters and start feasting.  At Adamson Barbecue, there are no utensils or plates provided.  Well, there were plastic spoons provided for soup and plastic water glasses for water or soda from the drink dispensing machine, but other than that, the expectation is that you will use your hands to dig into the food and have a messy old time.  They provided rolls of butcher paper on the walls which you could use as a “plate”, which is what we did.  We tore off butcher paper from the walls and used that as both our placemat and our plate.

Before I got into this though, I had to squeeze myself into a seat at the end corner of the table (since I was late and everyone else was already seated).  There were just enough seats at the long table for everyone to sit at.

The two main platters of food were placed in the middle of the table and thus it was difficult for those sitting at the edges to reach the food.  What I found uncomfortable about the experience is that it was a “everyone for yourself” mentality.  Instead of other food events where everyone is quite amicable and friendly, the foodies here only cared about what they had to eat.  No one thought about passing the trays of food around so that others could get a piece.  The ones sitting in the middle of the table with the food right in front of them just sat there eating without regard for anyone else.  I thought it was really selfish and disrespectful.  Everyone is invited there to try the food.  Why couldn’t they have passed the trays around so that everyone could get a piece?  The event host also didn’t give two damns about the discrepancy or how the food was distributed either.  When the host doesn’t care or set a standard for how the event should be run, of course the invitees won’t speak up or bother either…  Because of this, not everyone got to try everything.

I think the best course of action in this case would have been to place all the trays of food on a separate table like a buffet style.  Everyone could go down the line of food, gather their items on their “plate”, then sit back down at the long table to eat.  That way, it’s more fair.  When circumstances aren’t “fair” like these, it really grinds my gears. 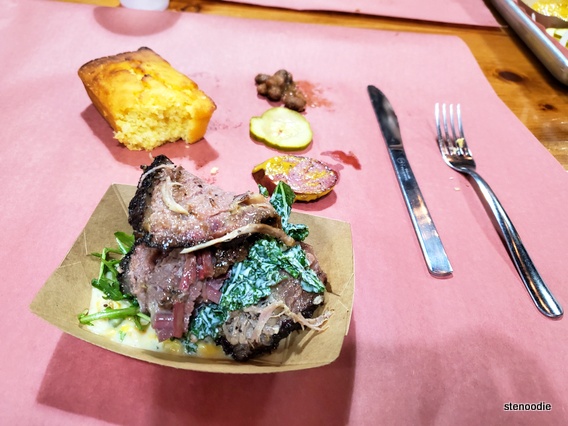 My “plate” of food

Anyway, now about the food.  The food was amazing!  Now I can see why everyone raves about the brisket and spareribs and pulled pork at Adamson Barbecue.  Everything was slow-cooked to perfection.  The brisket was tremendously moist and mouth-wateringly fatty in just the right parts.  The sausage was so meaty and flavourful.  The turkey breast was surprisingly moist and tender too.  The spareribs were roasted just right.  Even the salads (kale Caesar) were terrific.  I also really enjoyed the heaty and creamy Jalapeno cream corn (I checked, but it doesn’t seem like they have it on the menu anymore).  Also, don’t overlook the soft white bread.  A slice of it goes so well with all of the meats and strong flavours. 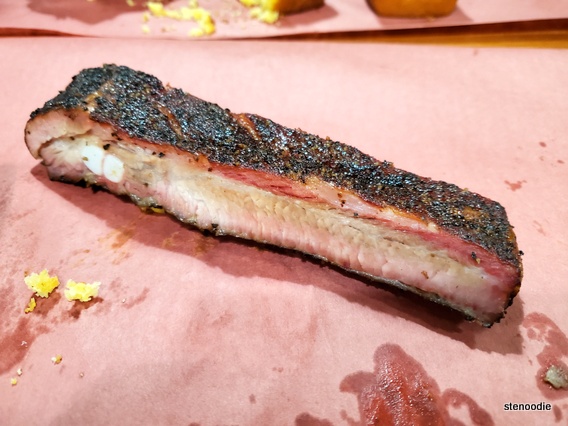 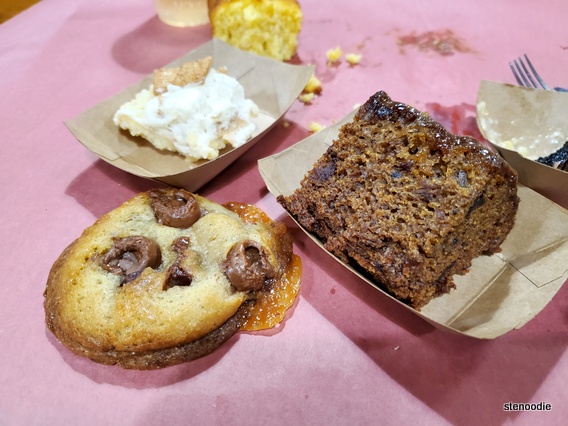 My spread of desserts

When it came to the dessert, that was when it was all set on another table.  Everyone simply got up from their seats and picked up the desserts and returned back to their table to eat it.  It should have been done this way from the start for all of the food. 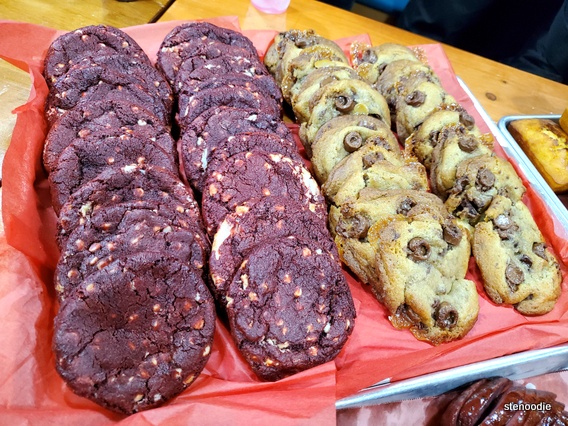 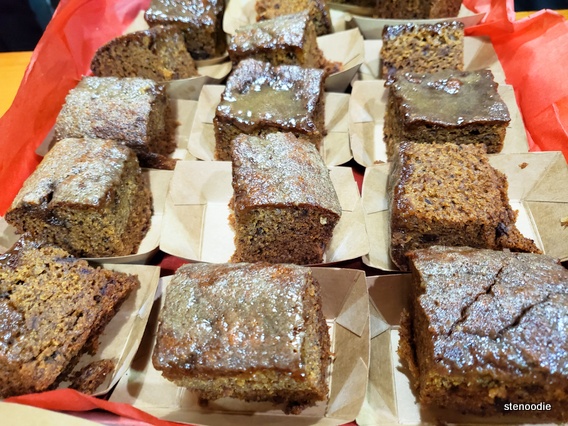 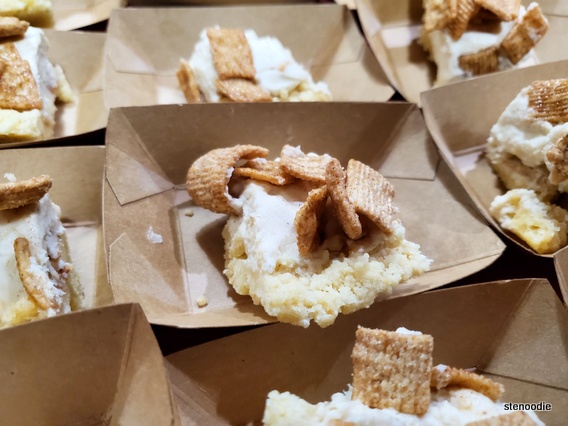 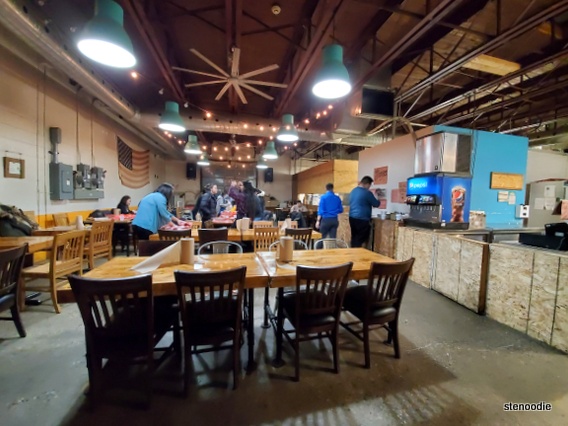 Also by the time that people were digging into the desserts, a couple of foodies already were starting to leave.  (I could understand because it was getting late, the meat-heavy meal was really filling and it was a good idea to enjoy the desserts later at home.)  They used the large butcher paper to wrap up the desserts to take home.  There were even rubber bands provided by the restaurant for you to wrap all your food up to go.  One good thing is that the event didn’t drag on at all (unlike some other events).  By 7:45 p.m., people were already doggybagging the desserts and leaving.  I was ready to leave too.  It was uncomfortable enough already as it was. 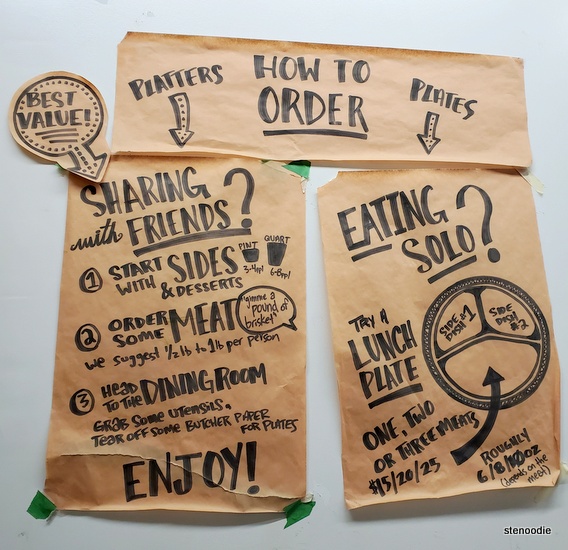 How to order the food at Adamson Barbecue

In my haste to leave, I didn’t take a photo of the storefront of the restaurant (it shares a unit with their sister restaurant next door, Conspiracy Pizza).  However, I did snap a few photos of the order menu and catering menu itself.  I would love to return to Adamson Barbecue in the future to try out their items again on my own time.

Also, at the time of the event, the staff shared that they were hosting a grand opening at their brand new location at 15195 Yonge Street in Aurora on February 1 and 2.

The food tends to sell out quickly every day at Adamson Barbecue, so in order not to be disappointed, you can actually pre-order your food.  To do that, you need a $100 minimum order two days in advance. 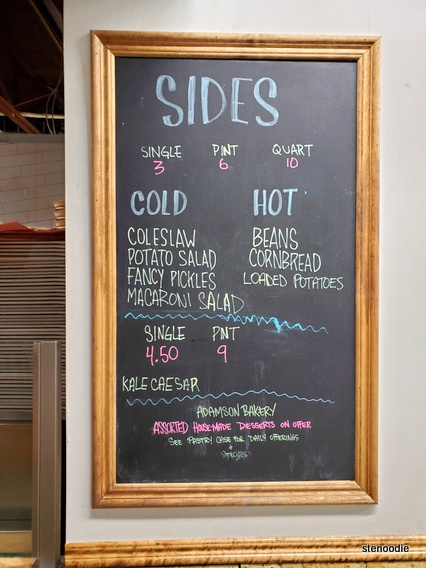 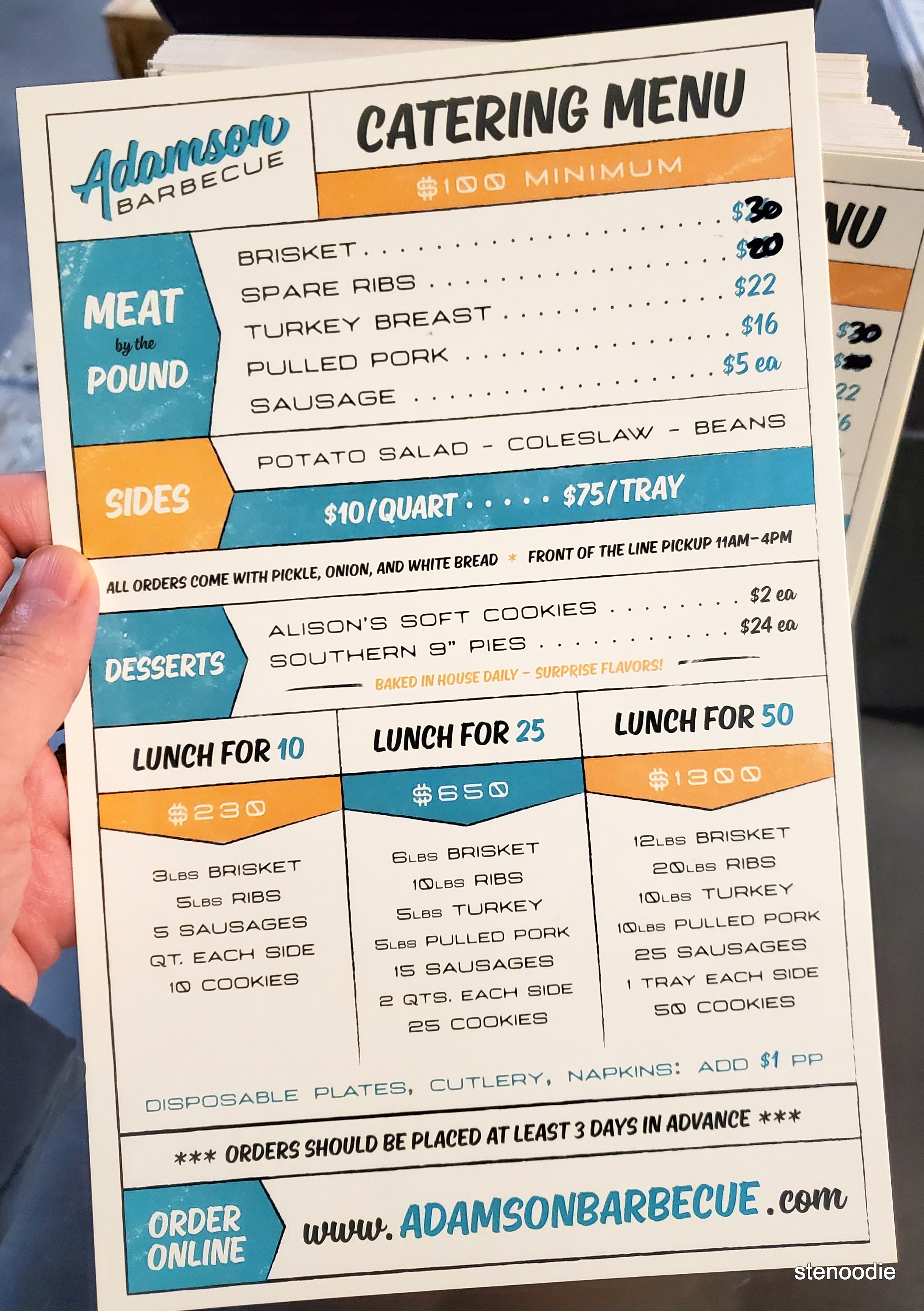 I hope this blog post doesn’t come off as ungrateful.  I was truly delighted and appreciative to try the food for free at Adamson Barbecue as part of a foodie event.  However, the food-sharing experience itself was off-putting and uncomfortable for me.  The other food events that I’ve attended were never this inhospitable or self-serving.  I wonder if the other food events run by Recs Media are usually like this.

Thank you to Recs Media and Adamson Barbecue for inviting me to this tasting!

FTC Disclaimer:  Although I was invited to a complimentary tasting at Adamson Barbecue, the opinions expressed here represent my own and not those of the event hosts or the business.