Posted on September 9, 2013 by stenoodie

Today was so-so. To be honest, i’m looking forward to home already. Today wasn’t that fun.

First of all, we were turned down by Tsinghua University. Our tour bus had driven up to their gates and they wouldn’t let us into the campus (schools in China are very particular about security and thus will not let in non-registered visitors). After quite a while of waiting outside, we finally got off the bus to be left on the curb. Our bus driver drove away too!

The entrance of Tsinghua University

Turns out that Mon Sheong had contacted the students in the Communications club in the university and these students had sent in the request to their professor. However, the professor forgot to send in the request to the guards at the gate. This meant we weren’t officially invited and were left stranded and forbidden from entering their campus (literally! See the sad picture shown of us left on the curb). Four of the students came out to speak to us but it wasn’t the same. Three people from our group presented their Powerpoint presentation from memory and with the help of an iphone while the Tsinghua students used a laptop to present theirs to us. They seemed deeply apologetic about it all, but i still think it’s a bit of a stupid mess. Why didn’t the professor care enough to send in the request to let us in? I mean, we came all the way from Canada hoping to correspond with them in person and yet we were smacked in the face rudely. We also weren’t able to experience eating lunch in the university cafeteria. We were told that we would have to “fight” for our food while in the student cafeteria. It would have been quite the experience to eat there. Alas, we never got the chance to enter Tsinghua university and to see their facilities.

We supplemented our lost lunch with a group tour one instead. Cliques have formed in the group now that we all know each other. Feeling a bit isolated.

Summer palace was so crowded! I thought it would have been a nicer place. Their corridors were indeed long and beauitful, but it was hard to enjoy with so many people there. It was also very hot. My sunscreen was melting off my neck — that’s when you know it’s hot. 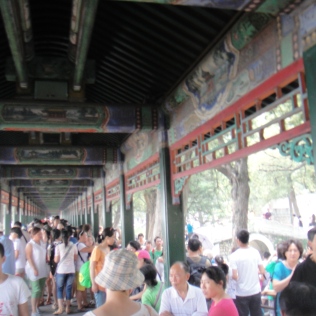 The longest corridor I’ve seen. It was filled with people which made it super crowded to walk through unfortunately 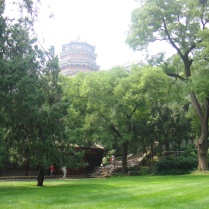 All the guys taking a jump shot 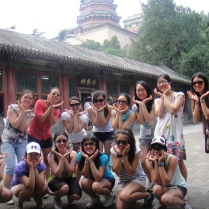 While the girls pretend we’re flowers

Parkview Green looked just like a Hong Kong metropolis mall. It was cool that it was an environmental building that was built especially to use half of what most buildings use

for energy. It’s filled with brand name stores, office buildings, and hotel suites on the top 5 floors. It’s shaped like a pyramid. There was an art gallery that contained a lot of interesting art. It featured a ton of Salvador Dali stuff. I bought a bag of seaweed chips from the high-end grocery store. They were a disappointment. I still remember the ones I had in Taiwan. They were soooo good!

A model of the Parkview Green building. 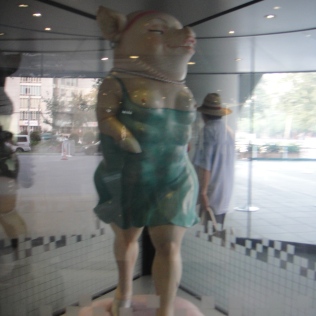 inside of the mall. It was huge! Once you were inside, it felt nothing like China. It resembled more of a mall that you visitt in Hong Kong instead 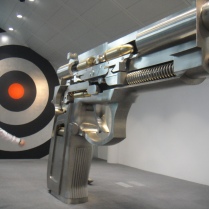 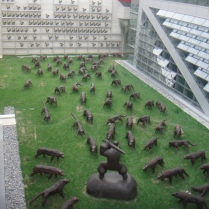 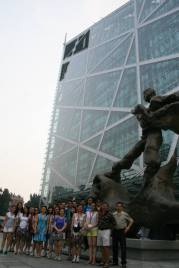 Everybody standing in front of Parkview Green for a picture

Then we went shopping at the Silk Street Building. The entire building is full of little shops level by level — it reminded me of a large-scale Pacific Mall that we have in Toronto. I bargained for 3 pairs of earrings for CAD $3. Easy peasy.  Rule of thumb in bargaining: You just need to be brutal enough and walk away so that they’ll get nervous over losing you as a sale and lower the price to meet yours. I think if I tried even harder, I could have gotten it for cheaper. We ate dinner there too. Korean bimbimbap. It was so-so.

Shopping and dinner at Silk Street

The grocery store was smelly and totally looked like a typical China store.

Although the only big disappointment of the day was Tsinghua University shutting us off, the whole day just felt like a very isolating experience for me. Since we had all seen and got to know each other in the prior weekly workshops and classes, we already have an idea of what the personalities in the group are like. We already know who we can gel with and who we don’t. Because of this, I’m finding it more natural to stick to who I’ve already bonded with. It’s now harder to bond with the others.  I’m finding it a bit sad and like high school again. I’m also starting to feel the effects of having a female-dominated group. There are 14 girls and 8 guys in total. When girl personalities start to show, the dramatics increase. Long story short, there are some people in the group that are already starting to piss me off.

It also didn’t help that I was no longer able to log into the previously open wifi network in my hotel room. That certainly adds to the isolated feeling. Ugh

Want to see what happened throughout the trip?