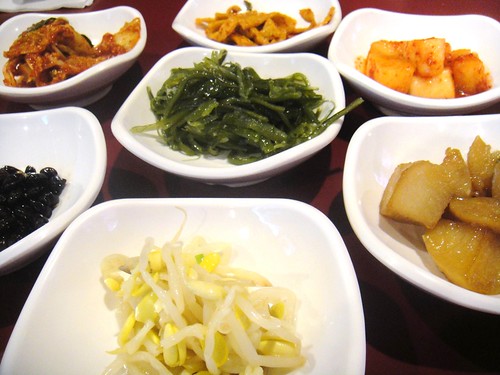 Lim Ga Ne Korean Restaurant is located near Finch Station which is easily accessible by the transit system.  My friend Victoria and I were catching up and chose to do so here for dinner.  It was a couple of minutes from the subway and very convenient to get to.

Inside, you can choose to sit at a low table on the ground like a traditional Korean or Japanese meal or at a regular table with chairs.  They offer a la carte Korean dishes or hot pot style.  Victoria made the very astute observation that they serve some Korean dishes not usually seen at a Korean restaurant, meaning that a lot of their choices were authentically Korean-based. 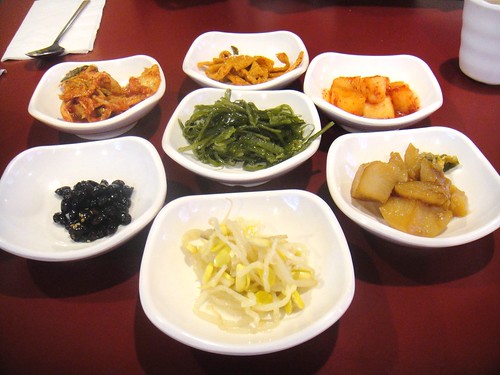 After we placed our order, the selection of banchan dishes arrived.  I was pleased to see that every single variety of banchan — kimchi, bean sprouts, potatoes, etc. — presented to us were all very tasty and well made.  You know how sometimes when you go to a Korean restaurant and not every single banchan tastes good?  Well, here at Lim Ga Ne, I was happy to enjoy all of these without complaint. 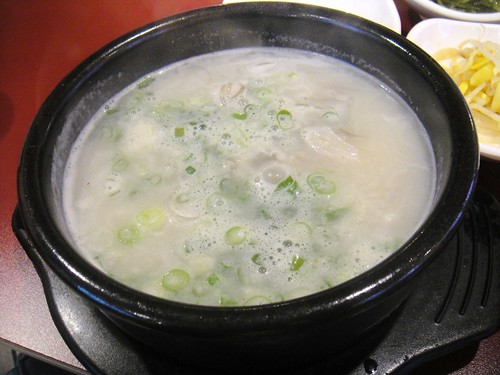 Ox-knee Soup (Do Gani Tang). $9
(unfortunately, you can’t really see the ox-knee pieces in this photo)

I was very easily suggestible to ideas that night and ended up choosing the Ox-knee Soup (Do Gani Tang) that Victoria pointed out.  It ended up having really soft and smooth ox-knee pieces.  It was also quite simple in taste.  Some people might even say that the soup base was very bland.  However, I enjoyed it because I wanted something plain and soothing.  The noodles in the stew were very fine as well.  It came with a bowl of “purple” rice. 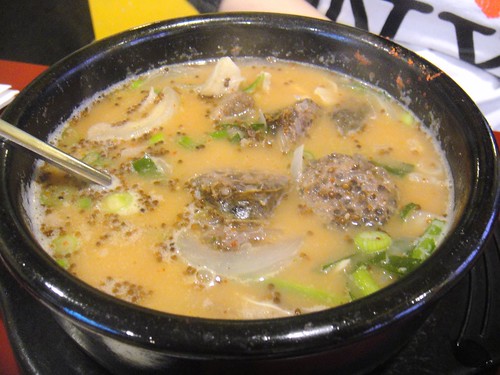 Victoria ordered another unique dish, the Korean Style Sausage Stew (Soon Dae Kuk).  (Would you agree with me that you haven’t seen this dish at other Korean restaurants before?  If you have, I guess it’s just me who hasn’t lol.)

In any case, I tried a piece of sausage from the stew and really enjoyed it!  The stew was a little spicy but the piece of sausage was unlike your regular hot dog.  It was actually made with rice in the middle or something chewy.  I really, really liked the texture of it!  It’s definitely something to try.  Victoria also pointed out that you can actually order an entire plate of these Korean Style Sausages to share.  I guess it’s something like an appetizer. 🙂 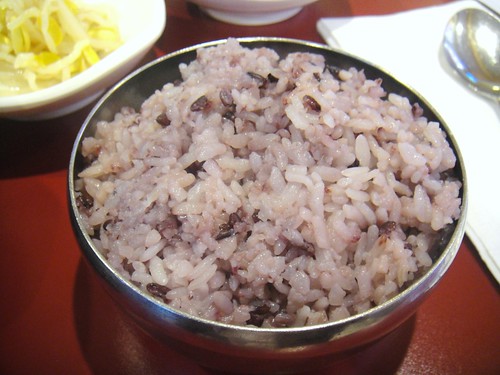 “Purple” rice that came with our orders

Overall, I really enjoyed our dinner.  The banchan was delicious, the service and restaurant setting were simple and great, and we got to try some brand new Korean dishes.  Man, I really do love being a foodie. ^_^ 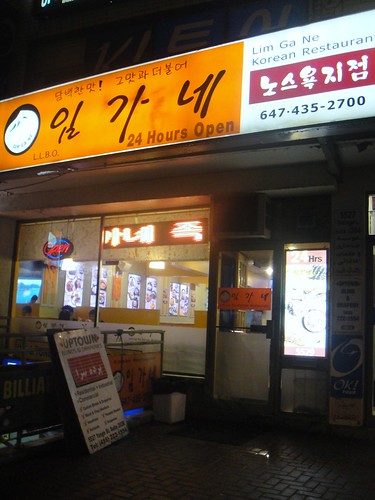 March 31, 2019:  I returned to this restaurant after that first visit in May 2014, nearly five years prior.  (This speaks highly of their staying power in an industry that is ever-changing and challenging.)

Lim Ga Ne is one of three restaurants in the Yonge and Finch intersection that is open for 24 hours, which makes it convenient to enjoy authentic Korean food at any time of the day (or night).  This is exactly why I chose to return to Lim Ga Ne to catch up with Carol since I was on a schedule and needed a restaurant that was open for early lunch.

We met up here at 10:30 a.m. on a Sunday for our early lunch, and I wasn’t surprised at all when I was the first one to walk into the empty restaurant.

View of the restaurant from my seat

The owner served me some hot tea while I waited for my friend.  The place hadn’t changed much except that they don’t have the floor seating anymore.  All of the tables and chairs are of the regular kind. 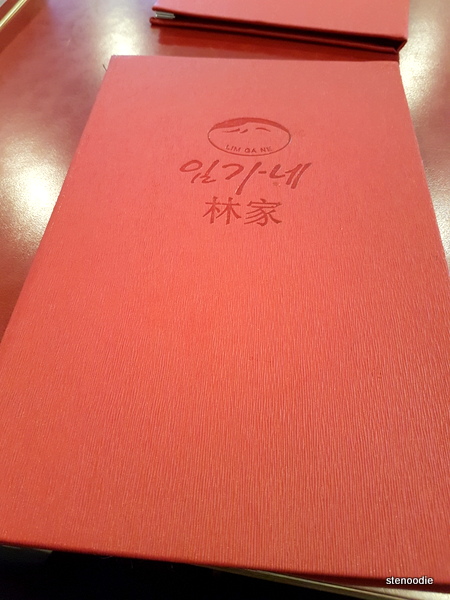 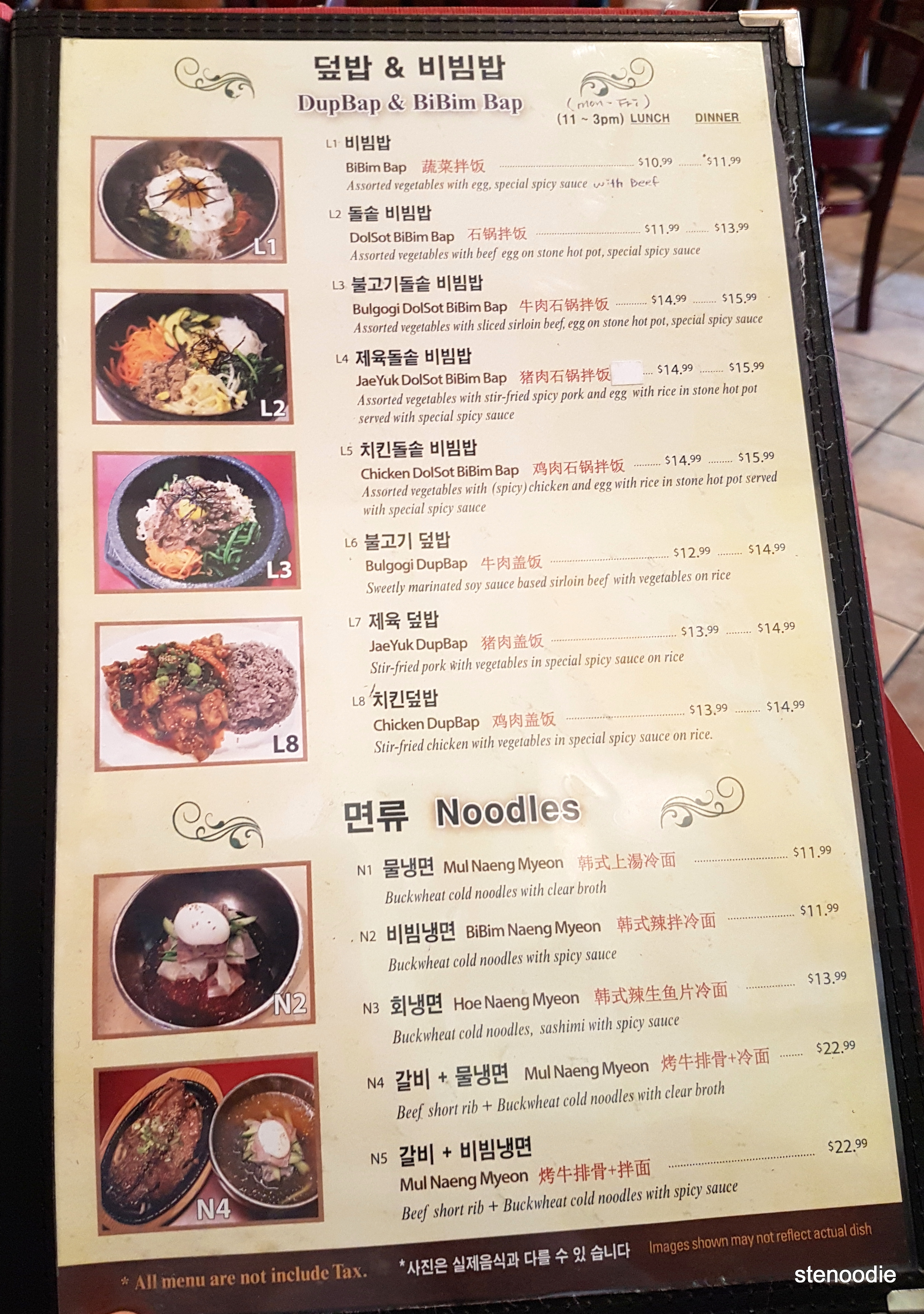 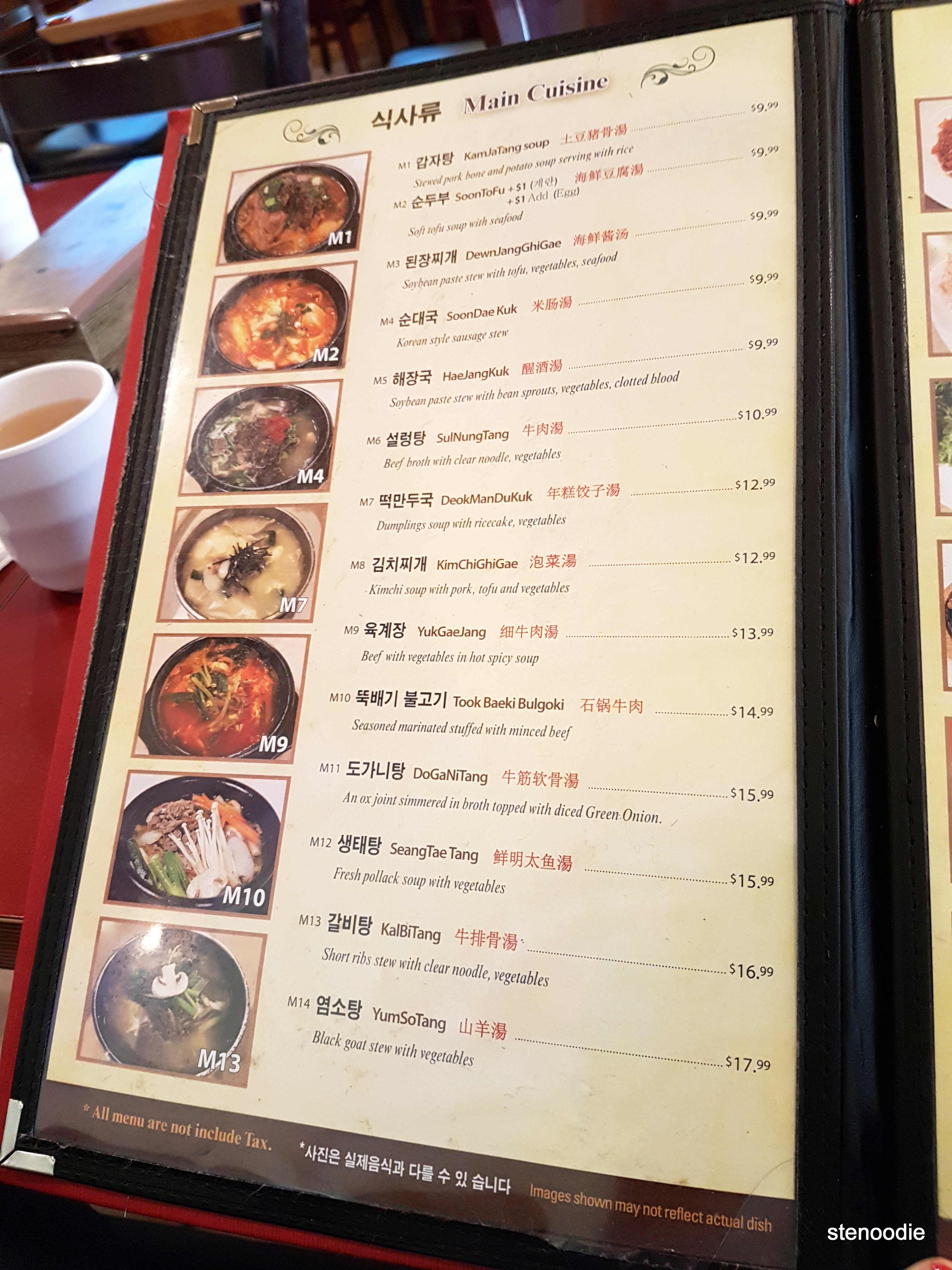 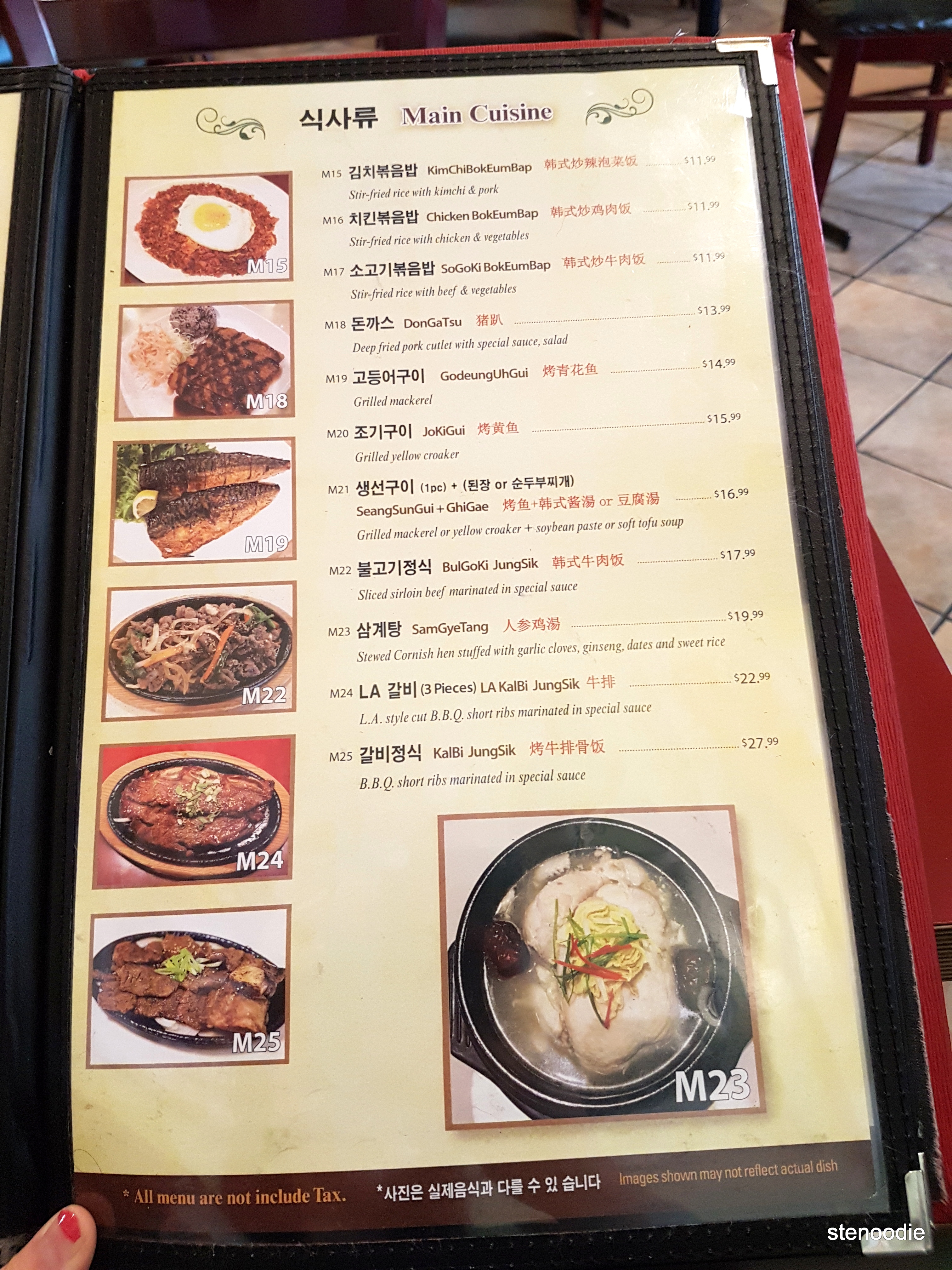 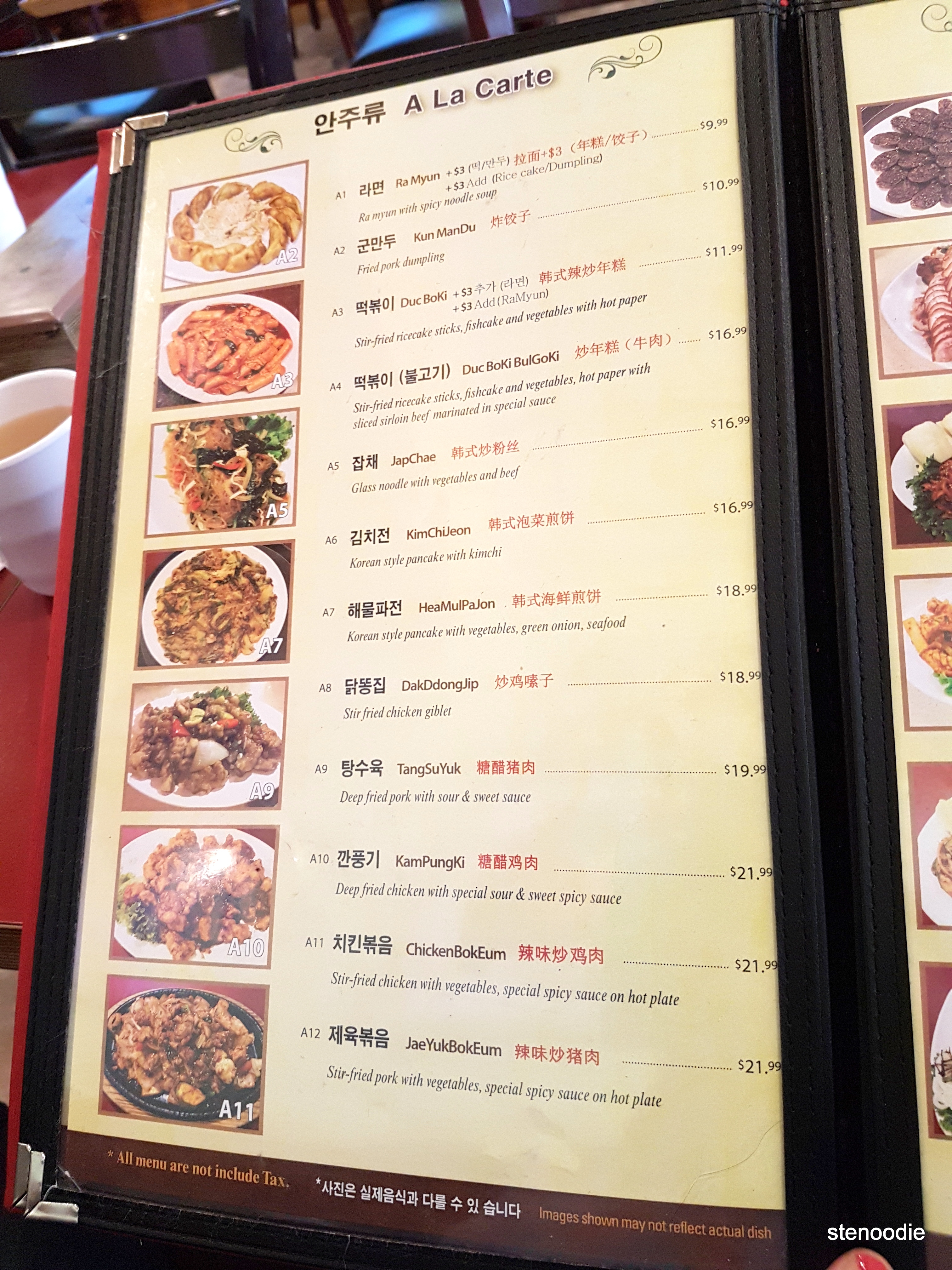 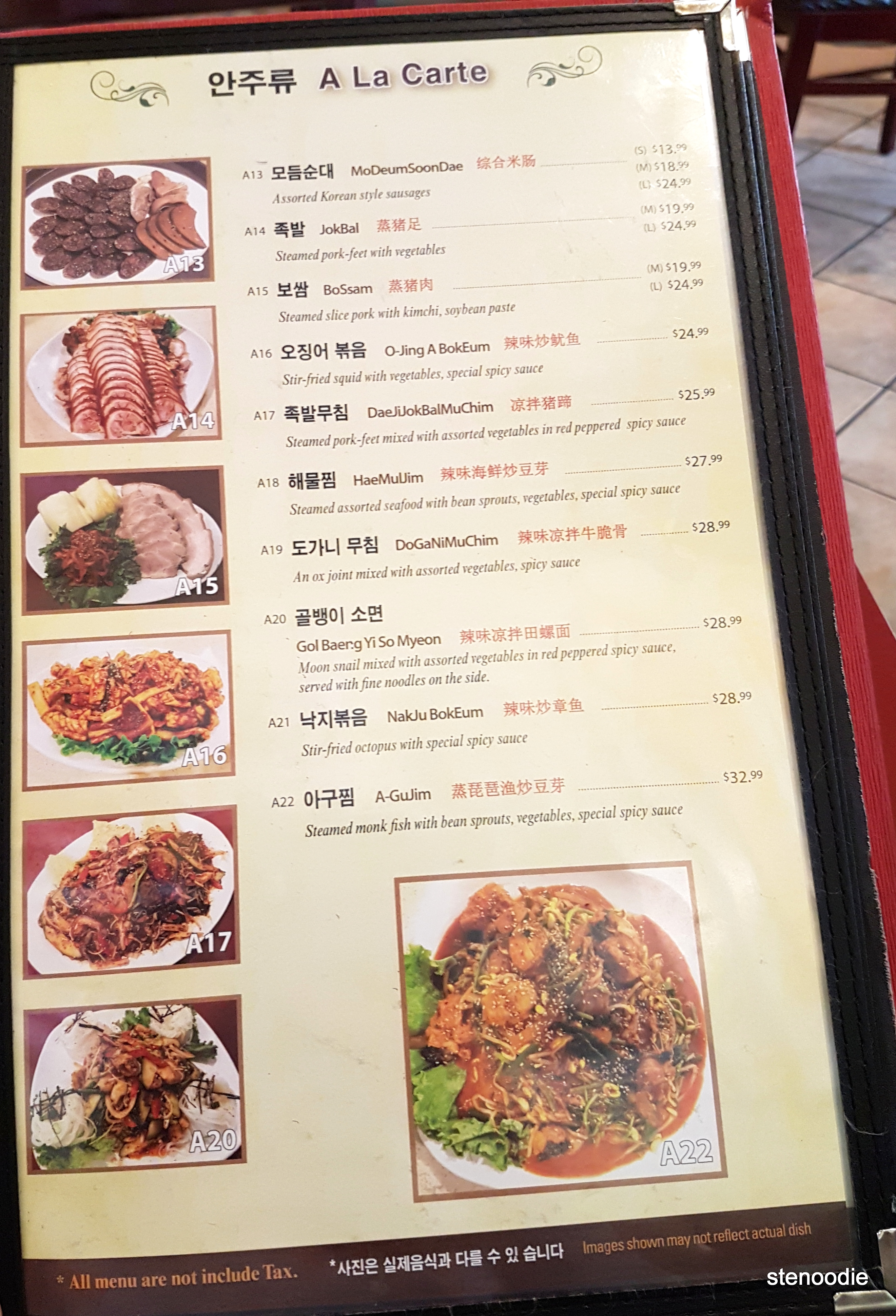 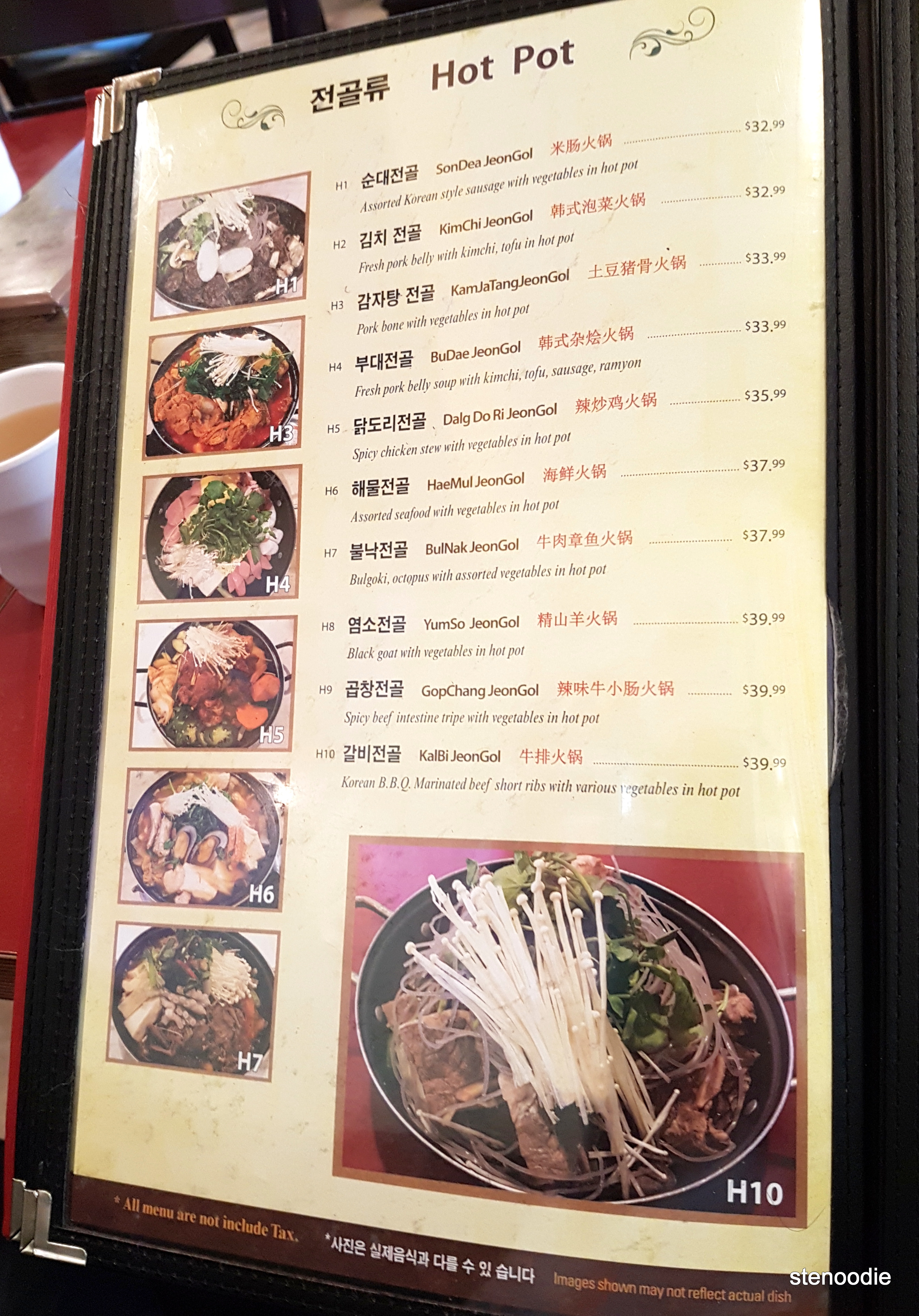 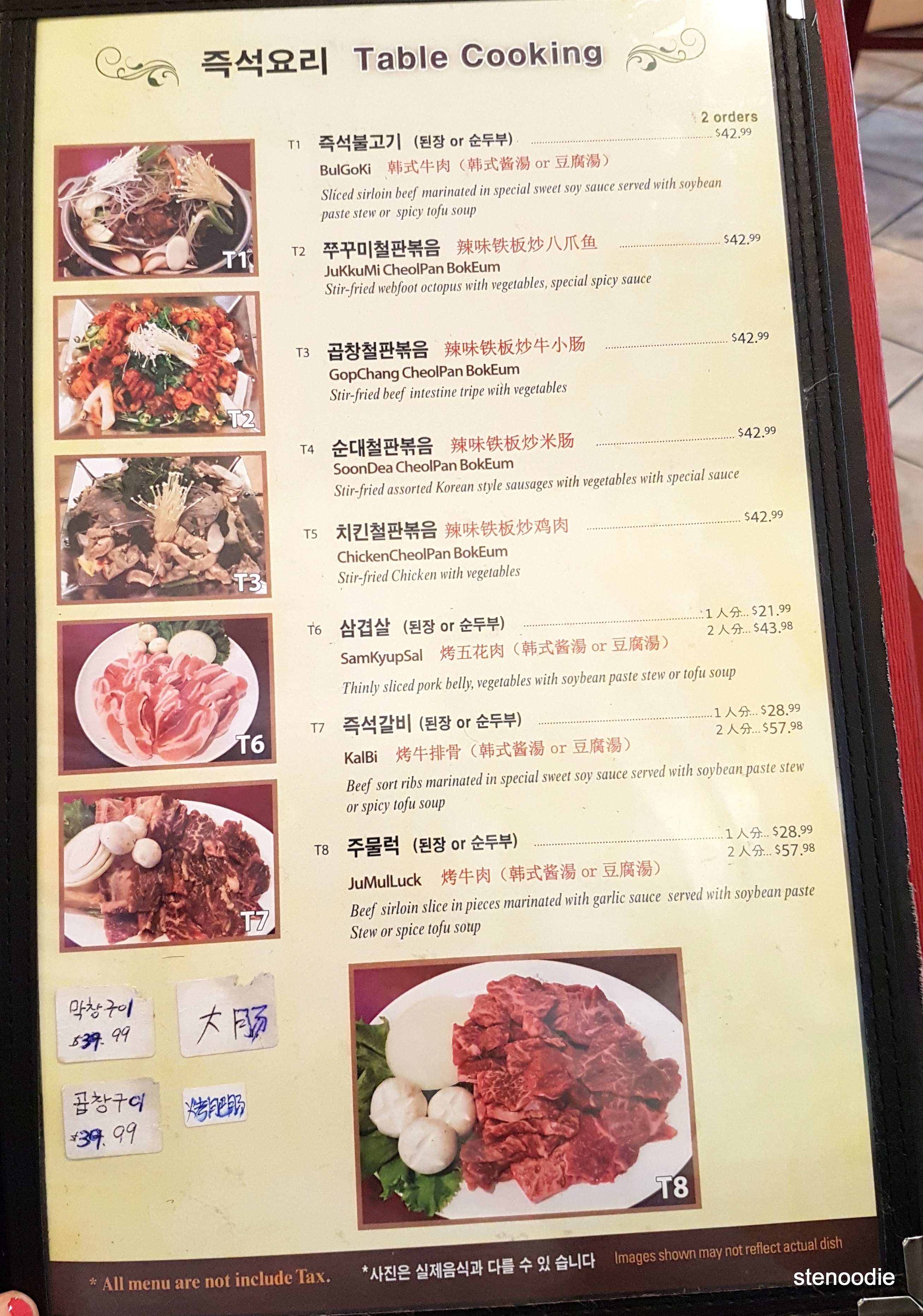 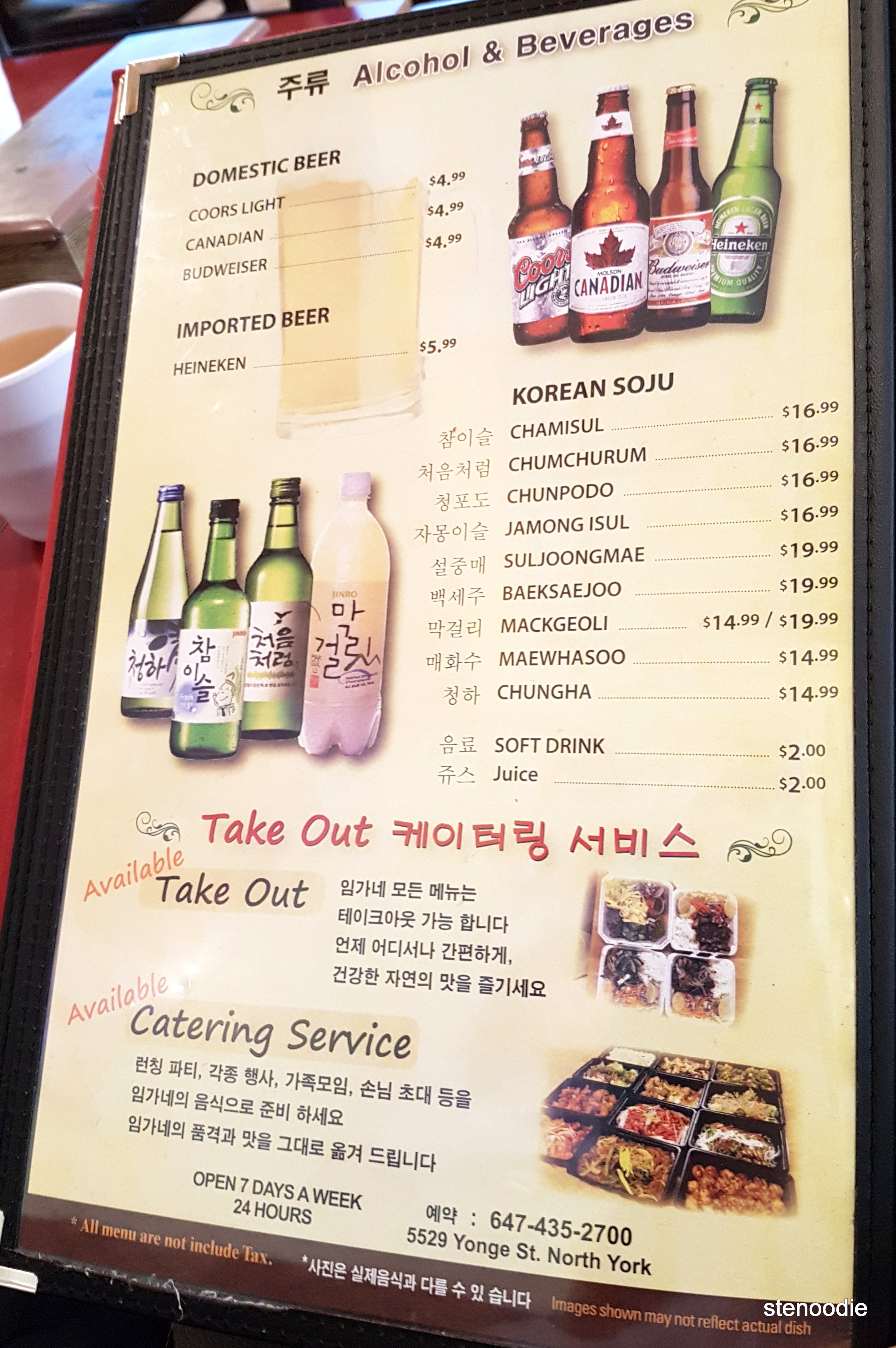 We had a feast here on this day and every single one of the dishes we ordered was delicious!  I especially adored the Korean Style Pancake with Kimchi (one of the best I’ve ever had!).  It was nicely fried, not too greasy, and slightly tangy and spicy from the kimchi. 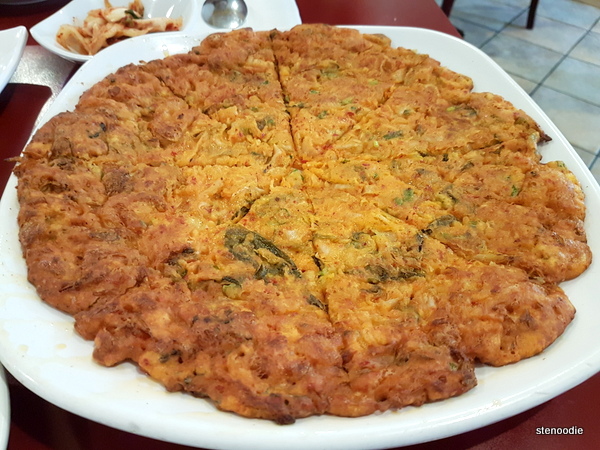 I also liked how they served a regular pancake as part of the banchan too. 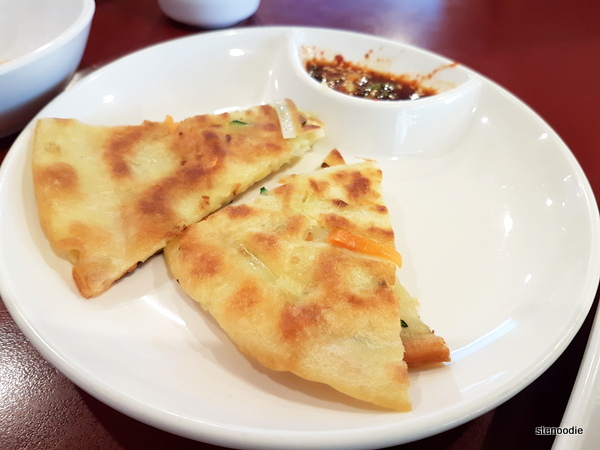 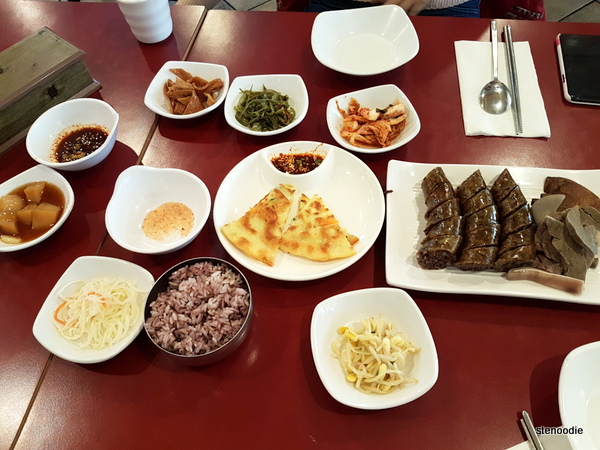 Look at all of the banchan 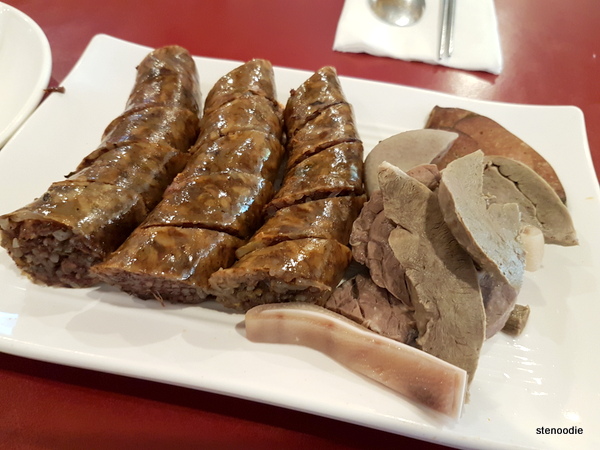 We had a small order of the Assorted Korean Style Sausages ( MoDum SoonDae) (the one that I briefly tried from my friend’s bowl the first time I was here).  These were definitely the same kind and texture as the ones that I had  five years ago.  They were delicious.

Apparently, sundae (or soondae) are a type of traditional Korean blood sausages with glass noodles and sweet rice inside of it.  Since it’s not pure meat inside of the sausage, it was easy to eat lots of it since it wasn’t too heavy.

Along with the Korean style sausages, there were some other cuts of steamed offals (liver and lung) on the plate too.  Sundae sausages are usually served with these offals in South Korea.

The Sliced Sirloin Beef marinated in Special Sauce came with a bowl of purple rice.  This is a pretty standard Korean beef dish that goes so well with rice.  The beef is a tad sweet due to the sauce. 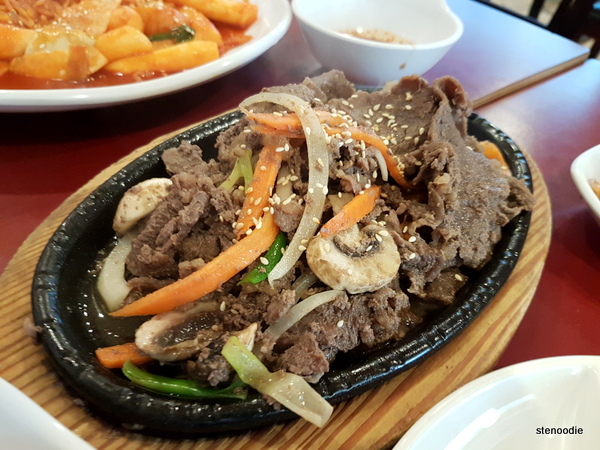 The   Dukbokki has stir-fried rice cake sticks, fishcake, and vegetables with hot pepper.  We had ramen added to it too.  It was definitely spicy, and Carol loved it. 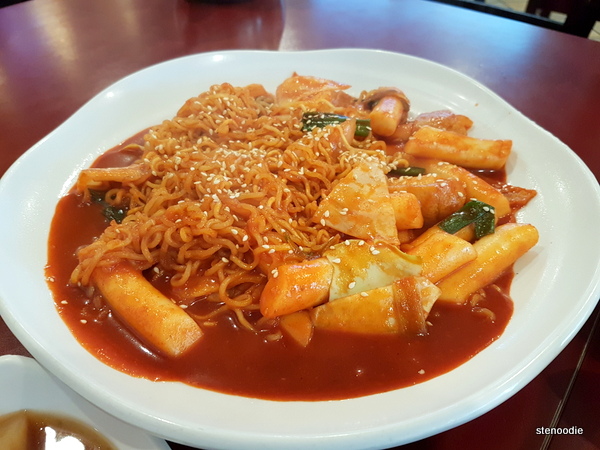 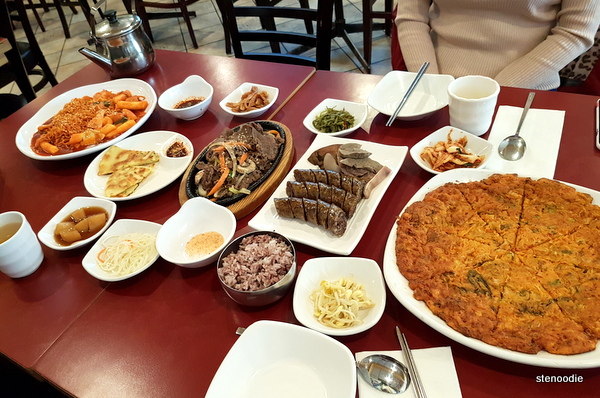 It was such a great Korean feast, and I’d definitely return to Lim Ga Ne again in the future.