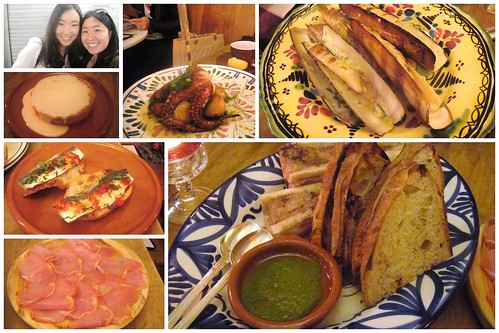 Located at 797 College Street in Toronto

Yay!  I finally got a chance to try Bar Isabel!!!!  This restaurant has been on the top foodie list on Urbanspoon for several months now. It’s similar to The Black Hoof where you get to share tapa-style dishes with friends.  I’ve heard that you need to make reservations weeks in advance for a table, so when Shelley and I decided to come to Bar Isabel, I made sure to call ahead of time to reserve our table. 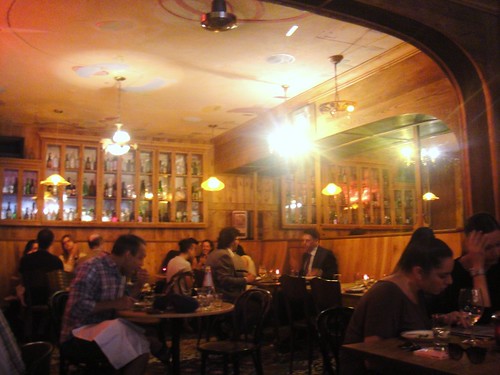 The place was packed!

To my surprise, they had room for us on Tuesday evening at 6:30 p.m.  The gentleman on the other line informed me that there would be a 2-hour seating limit for our table which I was fine with.

The restaurant was dimly lit with candles on the table.  Every table was filled by the time we got there and it was a little hard to hear each other at times since the din was quite loud.

I already knew I wanted to try their bone marrow (so as to compare it to the one I had at The Black Hoof).  We also ordered the Lomo Ibérico, a cured meat, the sardines, half of the octopus, and the clams that were recommended us us by our server. 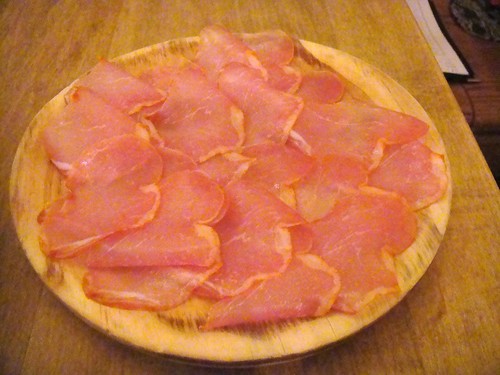 I really liked the Lomo Ibérico, it was very thinly sliced and melted in your mouth since it was soft and chewy.  It was quite unique!  I found that it taste better on its own than with bread. When eaten with bread, the lomo sort of disappeared into the bread.

The bone marrow arrived with 2 big bones of marrow, 2 slices of toasted bread, and a small dish of green sauce.  The marrow tasted great! Pairing it with the sauce on the bread made it taste great.  I found that the bone marrow we had at The Black Hoof was larger and more juicy though. 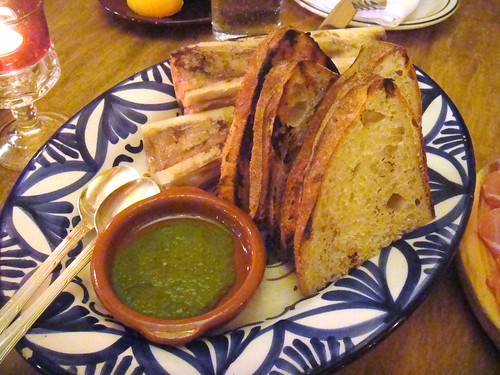 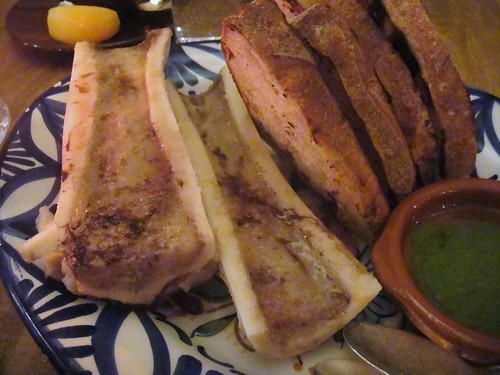 Close-up of the Marrow

The 2 portions of sardines came on a crostini.  I like how the sardines were thin and fresh.  The abundance of green herbs on the top also made it a great appetizer too. 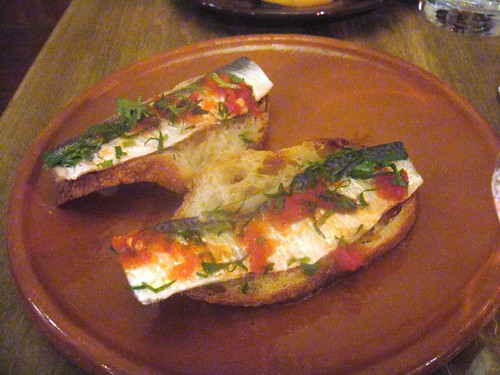 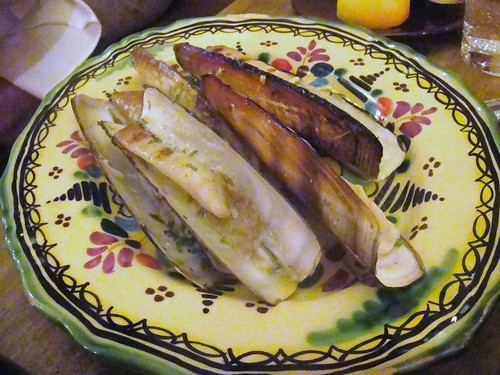 Mmmm, I’m really glad we ordered the grilled clams.  To my surprise these clams weren’t the round shelled clams that you get normally but they were the ones in a long shell.  They were sooo soft and chewy and yummy!  The best clams of this type that I’ve had were in Hong Kong where the clams are prepared fresh.  I’ve never ever had these clams before in North America and never expected them to be of the same caliber as Hong Kong which prepares world-famous seafood dishes.  I absolutely enjoyed this dish! 😀  The sauce onto which the clams were grilled with were exceptional too; very garlicky and tasty. 😀 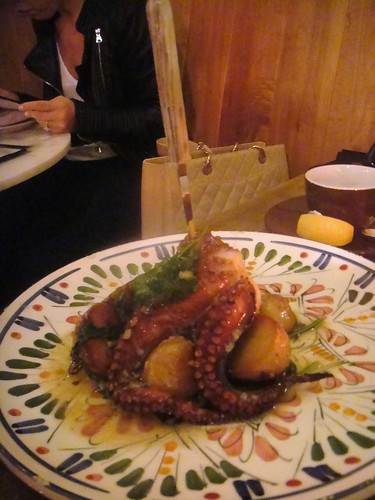 Our last tapa to share was the massive plate of half of an octopus.  It came with a sharp knife stuck into it (not good in terms of Asian ssuperstitions), potatoes on the side, and some vegetables soaked with the lemony sauce.  After we cut up the octopus, we discovered that it was very tender and nicely cooked.  This was one of Shelley’s favourite tapas of the night. 🙂

Lastly, we finished off with a must-try dessert.  Skimming online reviews, I’ve noticed that the basque cake with sherry cream is a definite must-try.  They were right.  After our server set the plate of cake onto our table, he poured steaming hot sherry cream onto the cake. 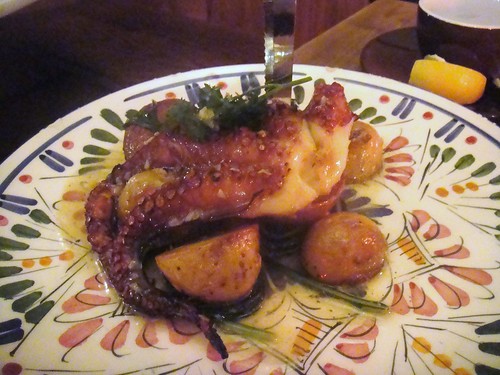 Another look at that half grilled octopus. Quite expensive for $34. Good to share this! 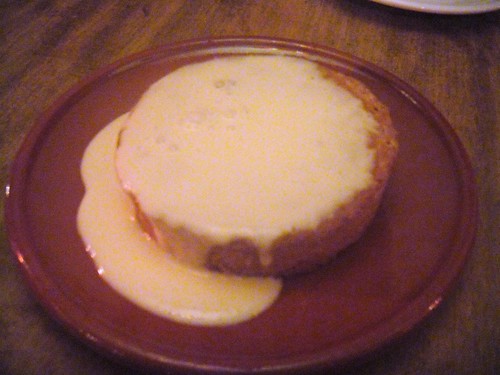 The sherry cream had a hint of alcohol in it but it was creamy to the point that it tasted like condensed milk. Mmm.  The basque cake itself was crunchy on its sides and soft and spongy in the centre.  It soaked up the sherry cream and tasted amazing. It was sweet and delicious.

Our bill came to a grand total of $100 which was quite hefty.  However, in terms of the quality of the food that we got and how highly ranked this restaurant is, I think it was worth the visit. 🙂