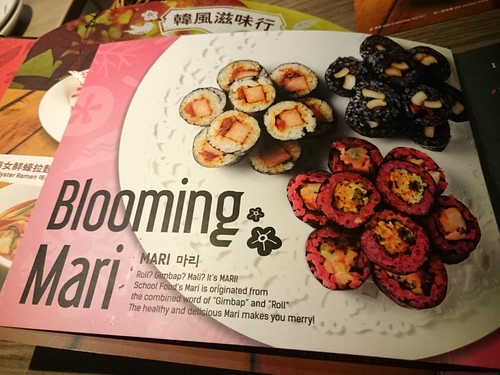 We finally had the chance to check out School Food, a Korean restaurant in Sha Tin.  (I swear, I’m pretty much checking off this whole block of restaurants here).  It’s funny that I willingly and excitedly decided on this restaurant considering we had JUST landed on the plane from South Korea a mere 10 hours ago.  I don’t mind Korean food one bit and I didn’t even get sick of eating kimchi during every single meal for six days straight.  Ha! 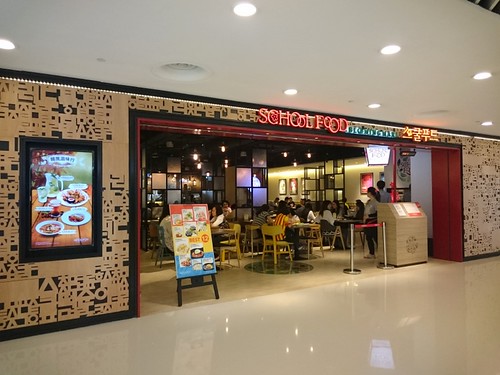 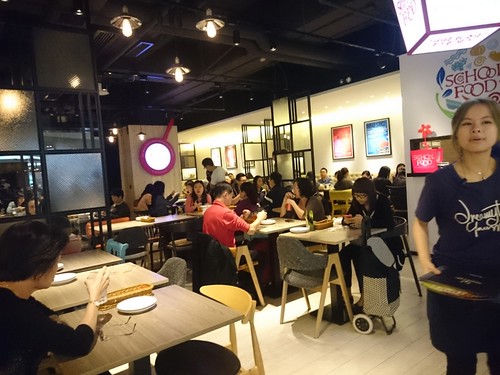 No line this time!

No wonder this restaurant has a long line-up of people the first time I noticed it — their food is amazing!!  We ordered three dishes to share from their beautiful menu that was laid out well in categories of ramen, rice, topokki, mari, and drinks.  So yum!  The place was pretty packed on a weekday at 1 p.m.

Our food arrived very quickly after we placed our order and the rest of the dishes arrived in quick succession after the first one. 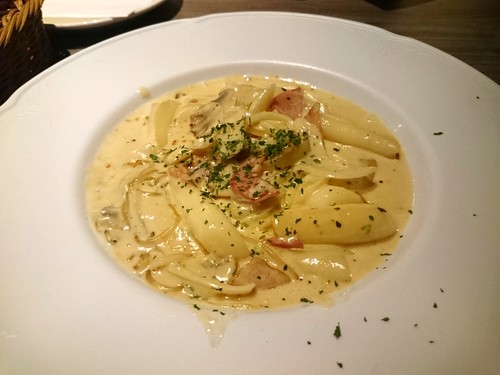 The first one is a soy carbonara topokki.  Topokki is the name for Korean rice noodles (actually, I didn’t even know this was what it is called).  Instead of the red spicy version that is popular in Korean cuisine, we chose the soy carbonara one.  It was a cheesy white colour with slivers of onion, bacon, only a few strands of glass noodle, and many fat topokki chunks.

I used my spoon to gather up some of the sauce and topokki and was blown away with how amazing it tasted.  I love cheese and it was perfectly creamy and saucy.  The topokki wasn’t too hard and the bacon and onions paired perfectly with the minimal glass noodles.  I couldn’t get enough of it!  It was actually a small-looking dish but I was thankful for its size as eating all that cheese would have filled me up rather quickly! 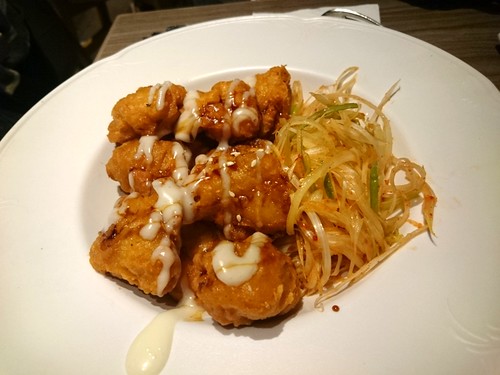 I didn’t get a chance to try steaming hot Korean chicken in Korea (sad, I know), so I was eager to order the fried chicken Green Onion Salad.  There were more than 10 pieces of chunky Korean fried chicken on the side next to the green onion salad.  The chicken was very tender on the inside and crispy on the outside.  It wasn’t spicy at all.  The chicken meat was juicy and good (but also contained some fatty parts).  The green onion salad was a tad spicy since it was raw.  A great mix! 😀 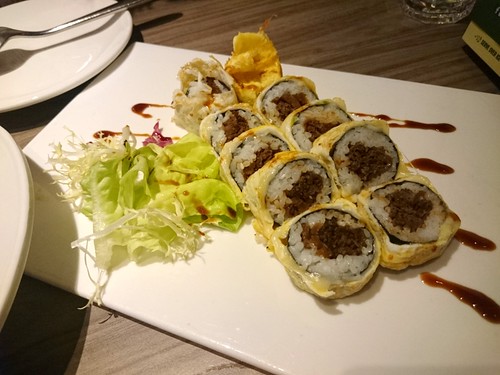 Our next dish was the mari (it’s a School creation where they mix ‘gimbap’ and ‘roll’ together to make ‘mari’.  It’s basically like a sushi roll.)  There were many different varieties of it.  The squid ink one definitely intrigued me, but I was turned off by how it had octopus inside (too much squid and octopus lately).  We ended up with the Blooming Mari, the restaurant’s namesake as it contained beef inside.

It was nicely presented and instead of seaweed that wraps around the roll like regular Japanese sushi, this one had a thin layer of egg on it.  Yum!  It was soft to bite into and the beef was distinguishable when you chewed it down.  It was good but not as delicious as sushi. 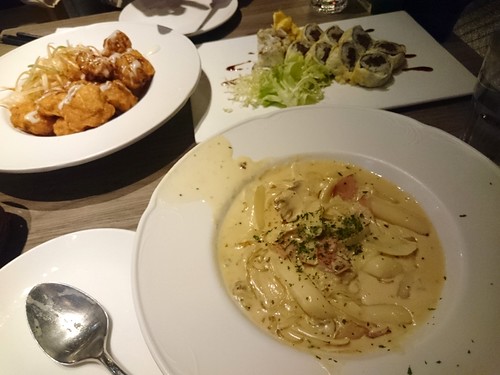 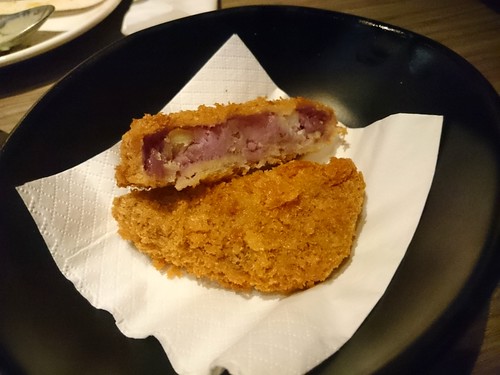 We added one more dish since we were feeling gluttonous.  For just HKD $22 or around CAD $3, we added the sweet potato and chestnut croquette.

It was a small croquette cut in half to share with lots of sweet potato in it.  The outside was crispy and we liked how it was made fresh.

I can’t believe how good the food was!  I love modern twists on cuisines such as this one. 😀  There are too many restaurants in HK that I highly doubt I would return here even though I loved all the food but if I ever did find myself here again, I would try their cold noodle, ramen, and maybe their spicy red topokki. 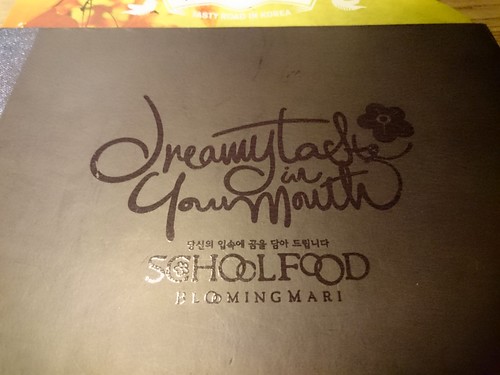 Dreamy taste in your mouth indeed!