Room Escape Adventures — Trapped in a Room with a Zombie 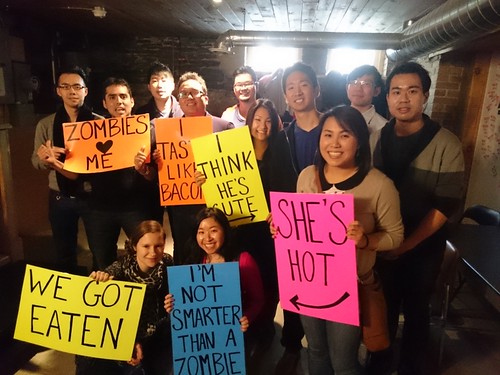 Located at 37 Bulwer Street in Toronto

A week ago, eleven friends and I went to play this newer room escape adventure called “Trapped in a Room with a Zombie” courtesy of Room Escape Adventures.  I first heard about this from my friend after we played the “Inception” room at Xscaper Arts about how there was an escape room that had a real live person dressed up as a zombie that was chained up while you tried to solve the clues in order to get out of the room.  The longer you took to solve the puzzles, the zombie’s chain would get longer and if he touched you, you would be out of the game and be only able to participate verbally from that point onwards.  When I heard about this game, I was absolutely riveted and wanted to try it out for sure.  Sure enough, I gathered eleven other friends who were up for this challenge and we set out on our zombie escape adventure. 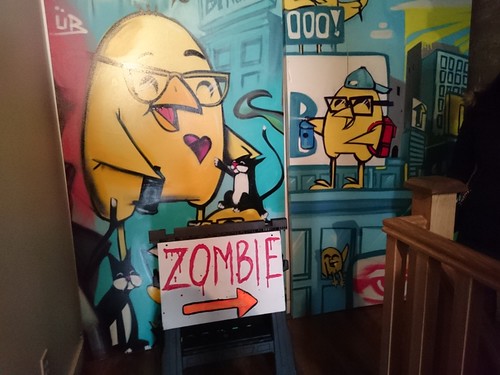 This is what you see after you enter the door. Then you walk down a flight of stairs to the basement where the “lobby” and game room actually is

This game is located at $37 Bulwer Street which is about a 10-minute walk from Osgoode Station in downtown Toronto.  It’s literally an apartment house that we entered that seemed to belong as someone’s residence.  In any case, we were there at 12:30 p.m., we signed a wavier form, and Dr. Oz explained to us the rules of the game.  He was very particular and thorough when explaining everything and even put some of us on the spot by name to make sure we were paying attention. 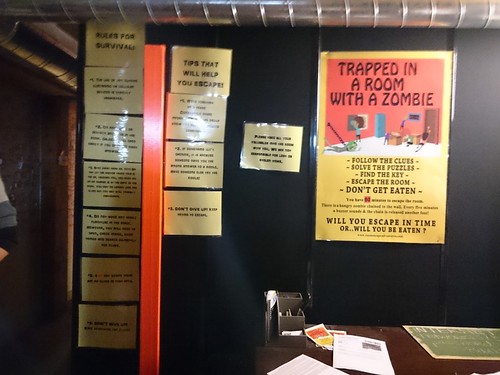 The rules of the game

None of us really knew what to expect from this game as not everyone was an escape game veteran.  When we were ushered into the room, we were surprised to find how small the room was.  I couldn’t believe that all 12 of us would be playing in here!  I’ve played several other escape rooms now and this was by far the smallest room made for 12 people.  At first glance, we also couldn’t see where the zombie was.

The game was on.  It turned out that Dr. Oz who also explained the game rules to us was stationed inside the room during the entire hour that we were playing inside.  This was also a first to me.  Usually, escape games have you locked inside the room(s) with only you and your teammates.  We believe that this may have had to do with the safety of the zombie in case any players wanted to attack the zombie in any way.  Anyway, because of this, Dr. Oz actually helped us a lot when we were trying to solve the puzzles.  There was a lot going in the room and since the room was small, it was very difficult for all 12 of us to have a major role in the room.  I truly think that 4-7 people would have been a better experience when playing this as some of us were left standing not knowing how to help. 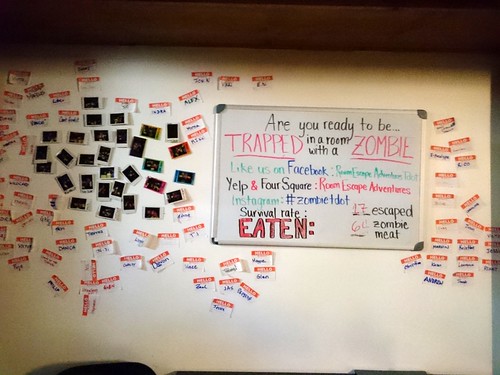 Unfortunately, we were the 64th group to be eaten by the zombie 😦

All in all, I think that playing with a zombie was fun because it definitely enhanced the thrill experience of the game and the shock factor.  However, in terms of solving the game, the zombie proved to be a major distraction and time-killer because we had to avoid the zombie in order to not be touched and risk being out of the game.  It would suck to be outed out of the game early considering that this game costed $30+ for one person for the one hour of play.