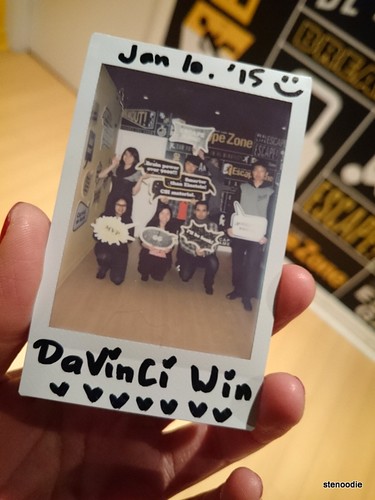 Located at 388 Spadina Ave in Toronto

Another day, another escape game. ^_^  Yesterday, on a sunny but cold winter weekend day (we’re talking -19 C), seven of us braved the cold and hit up EscapeZone, which is located in the heart of downtown near Kensington Market on Spadina near College Street.  EscapeZone is like all the other escape games that have exploded in all of GTA since it offers team players challenging puzzles and clues in a locked themed room to escape out of in a set period of time.

Carol helped us book the highest difficulty level room which was called “Da Vinci Code” and was art-themed in a parallel universe.  When we got there, we signed a waiver and were given the choice of discount on the game fee depending on if we 1) liked their facebook page on the spot and checked in on facebook and 2) showed proof of valid student card.  Thus, our game fees varied from $20 to $23 to $25.  So that means you can save up to $5 if you are a student and use social media to help them advertise.  This clever method reminds me of ESC-IT where you also had to check in on facebook to receive a discount.  It’s so smart of businesses to do this because social media is so powerful nowadays and facebook users who pay attention to their newsfeed will be able to notice your LIKE and check-in = instant advertising for free.  EscapeZone freely provided us with a free internet usage to do this.  This reminds me of Great Escape which did not provide Internet usage for customers to use to like their page in order to receive a discount.  It didn’t make any sense to me and I remember ranting it to the staff in charge at the time and also blogging about it.  Smh. 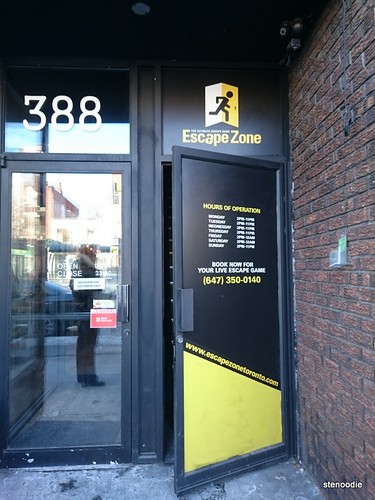 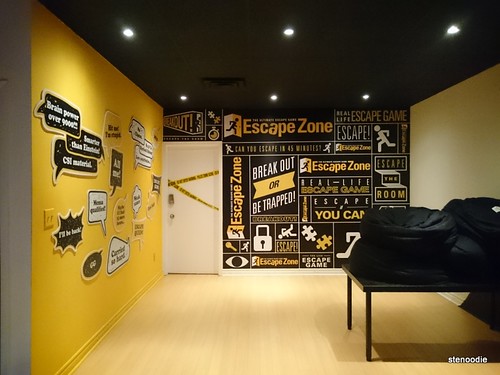 I love their design of their logo — so clear and standard

Anyway!  After we put away our belongings in lockers and coats on racks, we were led to the Da Vinci Code room.  Our group of 7 was a bit many in the small room but we made did with what we had. 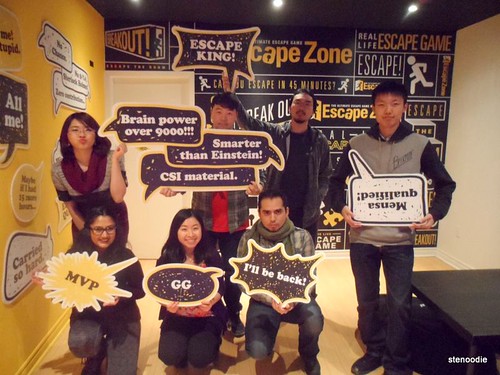 Our winning team! We got out in 40 minutes 🙂

We had 45 minutes to solve the room to escape and were given 2 hints.  If we found 4 puzzle pieces, we could earn an extra hint — which we did. 😀

Our team worked together soo well to find all the clues in the room and figured out a significant number of clues and puzzles in the room.  We did end up using all three clues though and the staff actually gave us more hints than we deserved; she was too kind.  Also, apparently, they messed up two contents of the lockboxes when re-arranging the room because we figured out something ahead of the order that it should have been in.

Long story short, the Da Vinci Code room was fun and all the clues made sense and were logical.  It was straight forward and appeared easier than the recent escape games I’ve played (Trapped in a Room with a Zombie and LockQuest).  It was satisfying nevertheless to escape from the room. 🙂 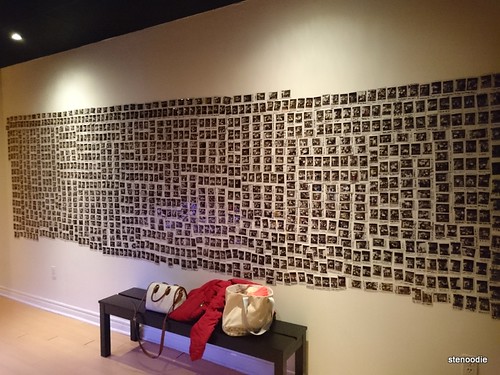 The evidence of all the players that have played here

We took a group picture using catchphrases that were velcro-ed to the wall (so smart!) and on a Polaroid that they posted onto the wall (no wall of shame here!  All the winners and losers are mixed up together in sequence).  They also have a small lounge area with beanbag chairs for you to sit and play board games and puzzles with while you waited.  Nice! 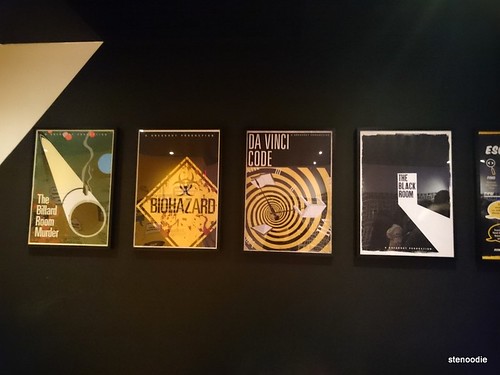 At the time of posting, these are the rooms available for play

All in all, EscapeZone reminded me very much of ESC-IT (like a downtown version of it).  The puzzles were fun and involved some lockboxes and the story was captivating and linked to all the props (for the Da Vinci Code room we played).  It definitely did not use any high-tech puzzles like the one in Xscaper Arts though (that one is still my favourite so far and MOST fun).  It’s also moderately priced ($20-25).  I’d also have to play the rest of their other rooms to see how they’re like (currently, they have Bio Hazard, The Black Room, and Billiard Room Murder — which they’re planning to replace soon).  Thanks for an innocent afternoon of game time, EscapeZone! 🙂