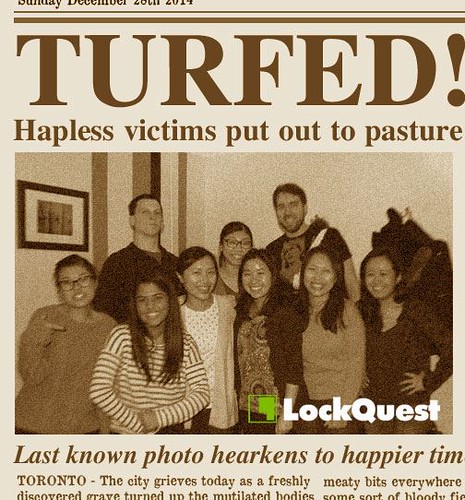 Located at 1204a Yonge St in Toronto

Earlier this week, nine of us played another escape room called LockQuest.  By now, most people know about room escape games and how they’re currently a top pasttime since they’re fun, challenging, and involve lots of teamwork.  LockQuest is located directly across from the Summerhill subway station on Yonge Street in Toronto which makes it very convenient to get to by public transit.  You can also park at a nearby parking lot.  The doorway itself is a little difficult to find at first because it’s right next to the doorway of the neighbouring hair salon and is camouflaged.  I personally didn’t have difficulty finding it at all because I was looking for its 1204 door number and saw it clearly marked on the door.

When you walk through the door, you go up a short flight of stairs and enter a spacious and cozy lobby where there are benches against the wall with ample hooks for you to hang your belongings on.  While we waited for the rest of our eight friends to arrive, Ryan, the man behind LockQuest gave us small handheld puzzles to solve.  He was a very friendly and humorous guy and this made the waiting time both fun and frustrating (the puzzles were hard to solve!),but it was mostly a productive and creative way to keep us entertained instead of just waiting around for everyone to arrive.  I appreciated how Ryan kept such a fun demeanor during the entire time we were there and made the effort to have us introduce each other and fabricate an ending for ourselves if the book killer actually managed to kill us all.  This is much different from the other escape room places where they hustle you through the rules, collect money and waivers, and throw you into the game room. 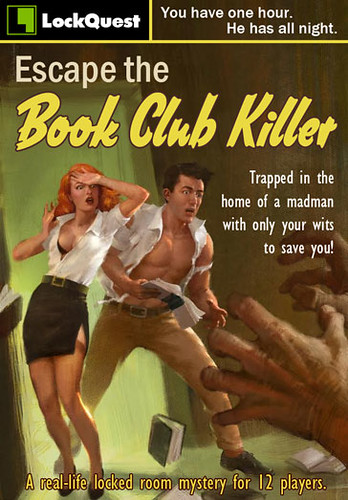 It was cool how Ryan explained the game rules by clicking through each one that played on a small television screen.  These are small details that really made the game stand out; as well as how they took a group picture for us before the game started instead of afterwards like at most places (there was a reason why they did this). 🙂

Our group of nine was split into two where we were led into two rooms that were connected to each other by a door and we had one hour to figure out who the book killer had murdered as well as get out of the room as a collective group.  Of course I’m not going to spoil the puzzles or story of the escape game for you but I really liked how difficult the puzzles were.  You really had to link all the separate clues together in a story-like fashion in order to figure it out.  I liked the puzzles and clues that they had in there… especially the one about the snowman and knight. 😉

I also liked how there were security cameras inside the room and we could get as many hints as we wanted by calling the telephone.  Ryan was observing us just like how in Xscaper Arts they would do the same thing so that they could help us out as needed.  Also, we were given some clues as well toward the end of the one-hour which was much appreciated.

Apparently, at the time of playing, the success rate of escaping the room was 22%.  Unfortunately, we fell into the group of being unsuccessful and weren’t able to successfully navigate out of the room before the one hour was up.  We learned a lot though and I really appreciated the complexity and thoughtfulness of the puzzles.  It was a fun room and I would recommend this place to more-experienced players.  You definitely need at least six to eight people to play this room.

What was funny is that this place is advertised as a “real apartment” on their website and I actually expected it to be a two-three level apartment with stairs to different rooms.  That wasn’t the case; I guess I had really high expectations for that!  They currently only have one room for play and maybe in the future, they’ll expand and have another themed room.  Who knows.

Thanks for a great experience, LockQuest!  I liked how everything tied up at the end. 🙂  I applaud the fine attention to details!