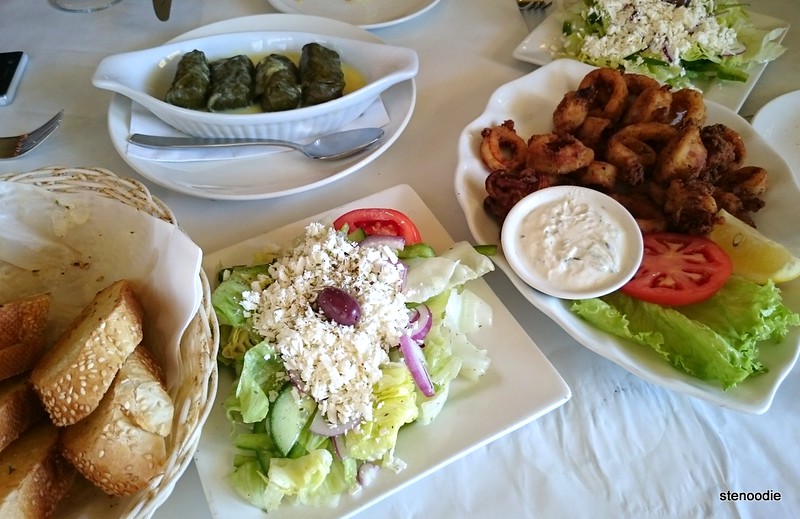 Located at 5308 Highway 7 East in Markham

We reunited here recently for brunch!  It was so nice to catch up again, especially after many of us had been travelling around the world.  Between us, we’ve been to Korea, Japan, Hong Kong, and New Zealand recently.

The restaurant of choice was Ithaca Greek Mediterranean Restaurant.  I noticed its existence when I was having dim sum at Golden Duke Chinese Cuisine a few weeks ago.  I hadn’t had Greek or Mediterranean food in a while and was curious to see how this restaurant would fare. 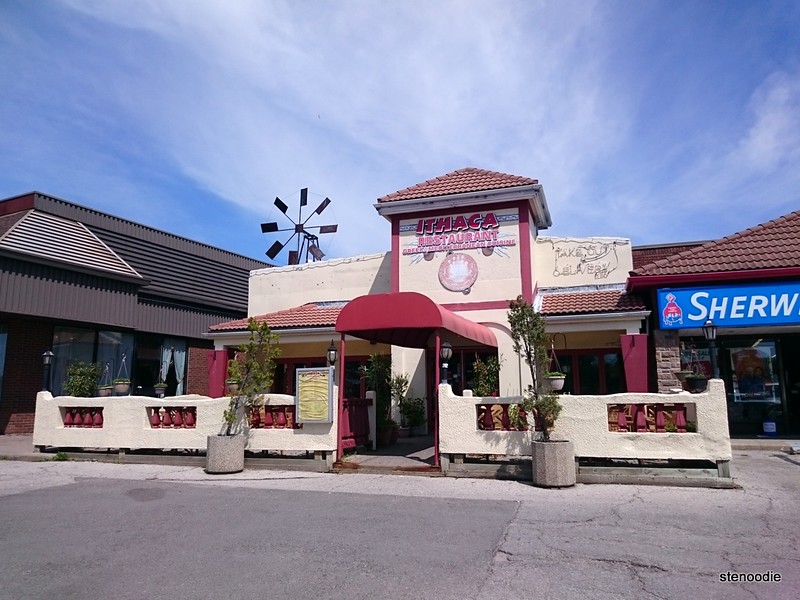 We arrived early on a bright and sunny Sunday morning

Their website says they open at 11am on Sundays, so that’s the time we decided to meet.  So it was a surprise when we entered the restaurant to find that the doors were certainly unlocked but that there was no host or hostess at the front to serve us.  We stood there for a minute or two before a kitchen staff noticed us and told us to just take a seat at any table as a server would be with us shortly.  Okay then…

We used this time to catch up and a little while later, a man who looked like the manager of the place entered the restaurant.  He also looked shocked to see us and said that they don’t actually open until 11:30am and asked us if the doors were unlocked.  Yes, they were…  I took this chance to inquire why their website stated opening hours at 11am when they actually open half an hour later.  That’s pretty unprofessional in my mind.  He answered that they’ve been trying to get their tech guy to change the info on the website but that they haven’t had success.  Uh, that is so unprofessional.  Imagine if we all had somewhere to go afterwards and planned to have brunch at 11am sharp but got delayed — they’d lose a customer that way! Ithaca should really look into this.

Nevertheless, we received our menus and water glasses shortly after.  We decided on sharing three appetizers and two mains between the four of us.  What a good idea that was! 🙂

The Famous Flambé Cheese was served with a basket of garlic bread that were heavily buttered.  I liked it as I haven’t had garlic bread in a while but I’m certain that most people would find it too over-buttered. 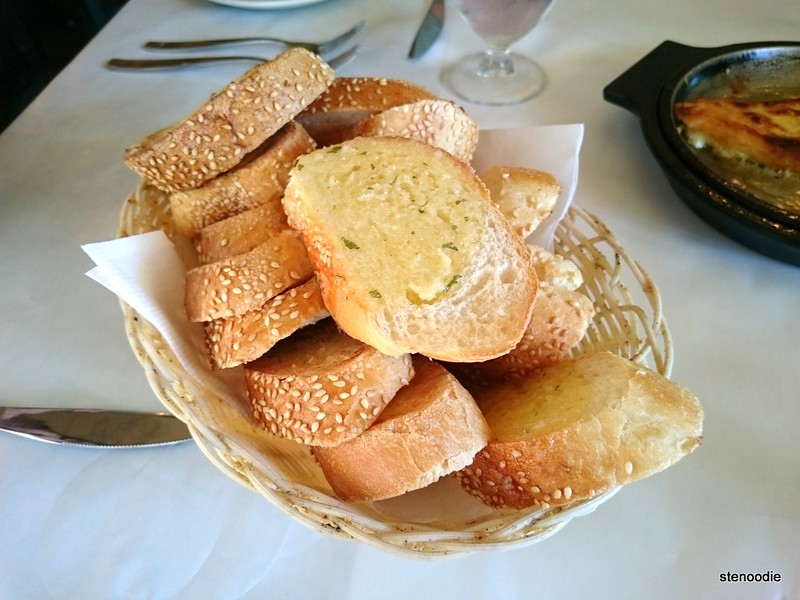 The server lit the plate of Flambé Cheese on fire in front of us and I quickly snapped this photo.  Yum! I love cheese.  This was my first time having Saganaki Opa.

Watching the Flambé Cheese in action

You have to make sure you eat it hot otherwise it’ll harden up and not taste good. We split up the gooey cheese and tried it out. 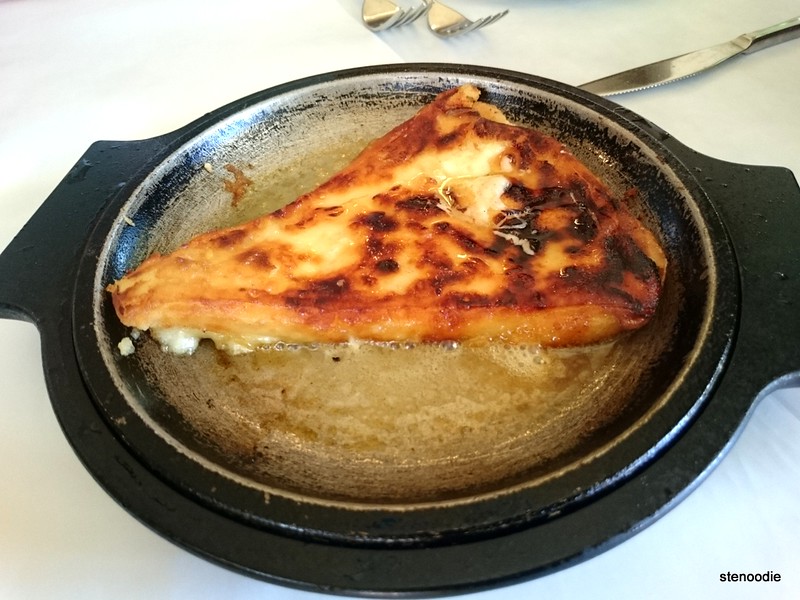 I actually liked it on its own, but if you have it with the garlic bread, it takes away the saltiness.  It was great! 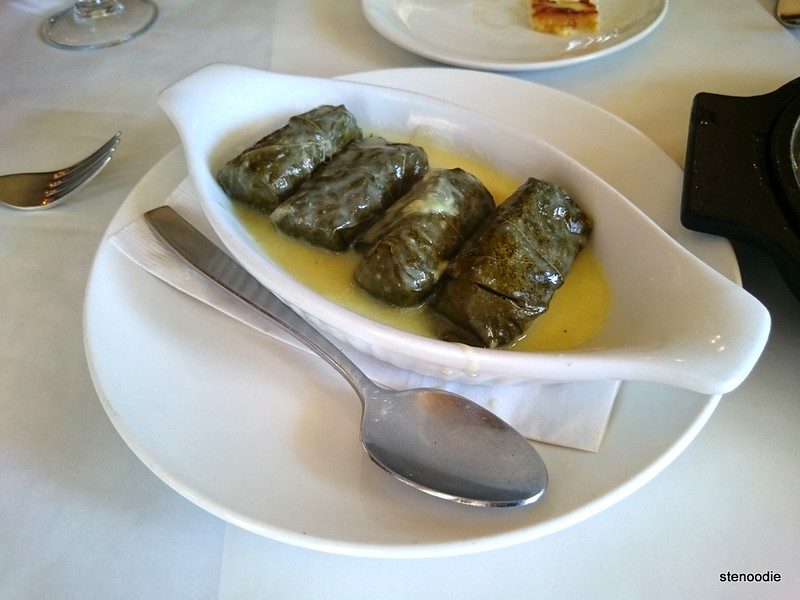 The second appetizer was the rice and ground beef wrapped in grape leaves.  This is such a popular Greek dish that I just had to try it.

It arrived in four pieces, which was perfect for us to share.  I liked the light lemony sauce that it came in.  These grape leaves weren’t the most amazing ones I’ve tried but they were still pretty solid and tasted great. 🙂 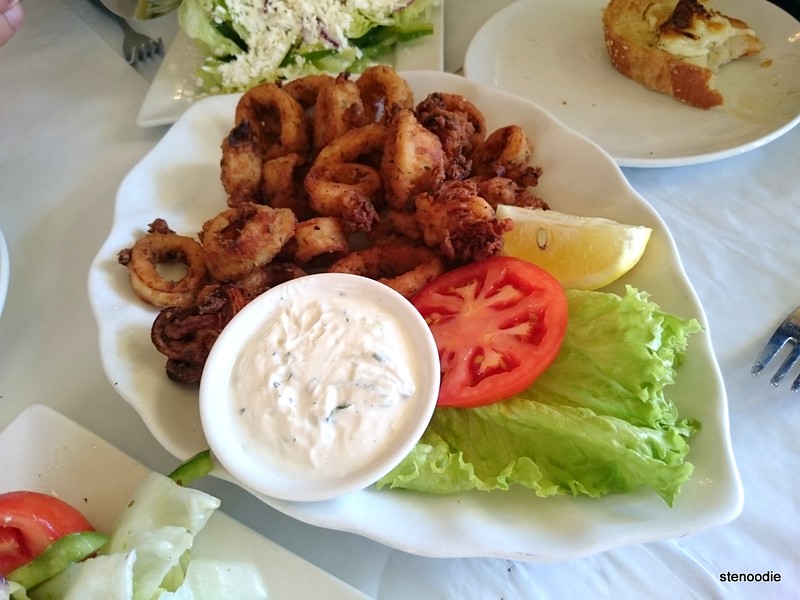 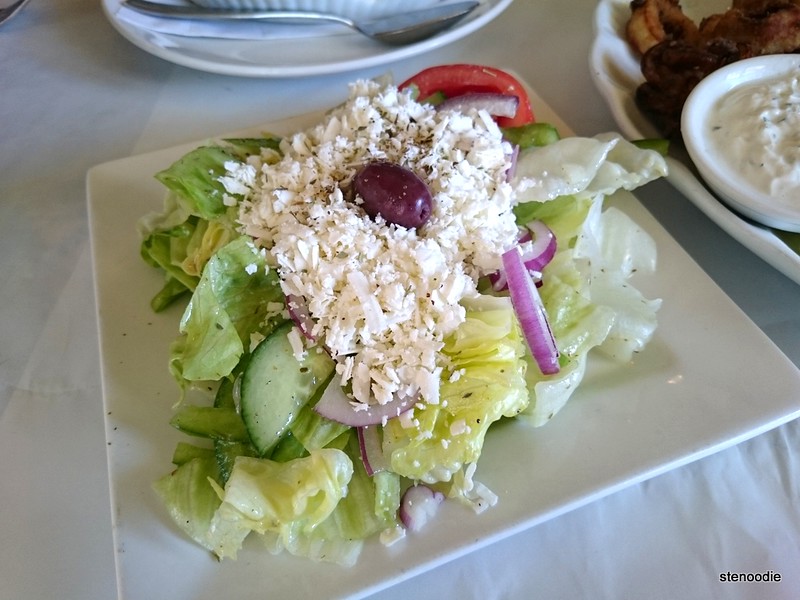 At this time, our two salads from the mains arrived so we shared them too.  There was a lot of feta cheese sprinkled into the lettuce, cucumber, and onions.  The lettuce was fresh and crisp.  I wish they had more than one black olive on each salad though.  Olives are so delicious and good for you!

Once we finished the starters, our mains arrived.  We ordered a Mixed Souvlaki and Roast Lamb (they are apparently known for their lamb here).

These two dishes looked kind of disappointing.  The Mixed Souvlaki contained beef, chicken, and pork souvlaki.  All three meats were very hard and a little dry.  Only the chicken souvlaki was more tender.  I didn’t like it that much and found it a chore to finish. 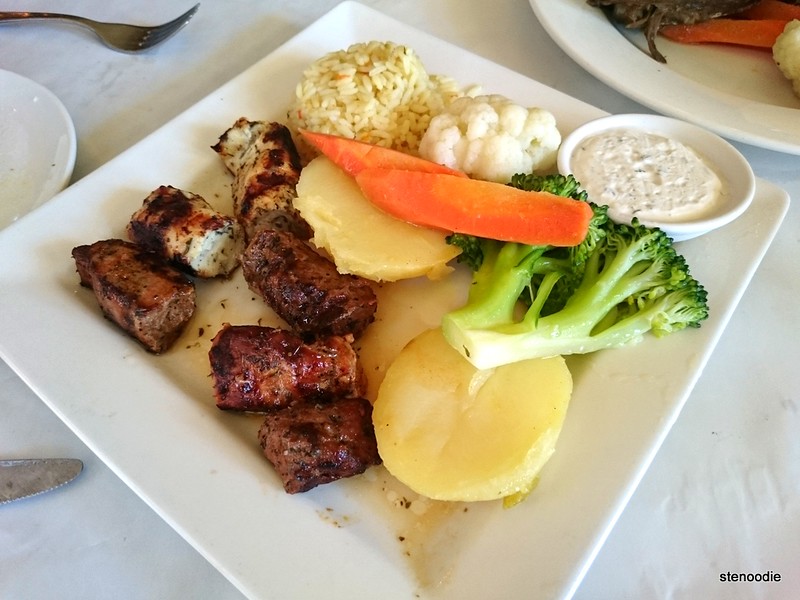 Mixed Souvlaki. $17.95
-mix for your sampling. Tender chunks of chicken, pork and lamb, marinated and broiled to perfection. Served with rice, roast potatoes, veggies and Tzatziki.

The roasted lamb leg was large and was actually quite tender.  It was a little on the salty side though.  All throughout the meal, we found most of their food a little in the salty side.  Their potatoes, while moist, were also quite salty.  Their rice that came with the Souvlaki was pretty good.  The boiled vegetables were a good diversion from the meats and carbs. 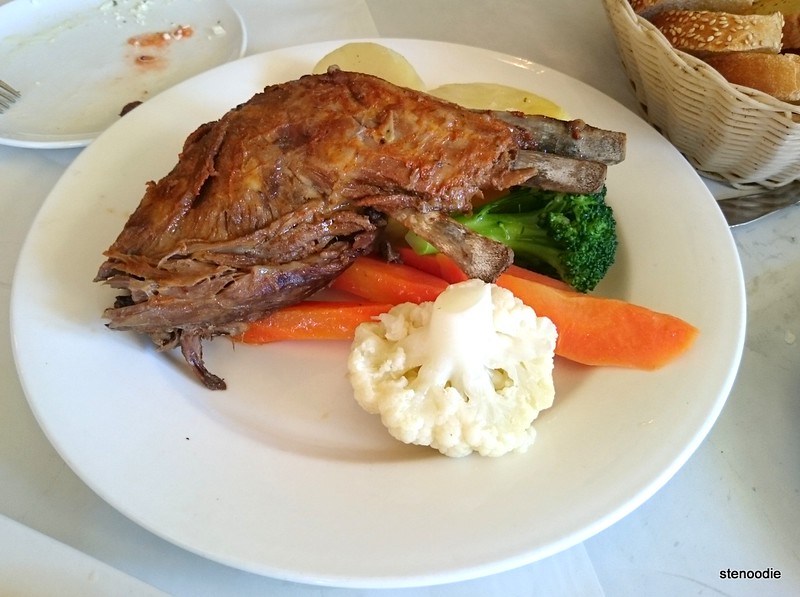 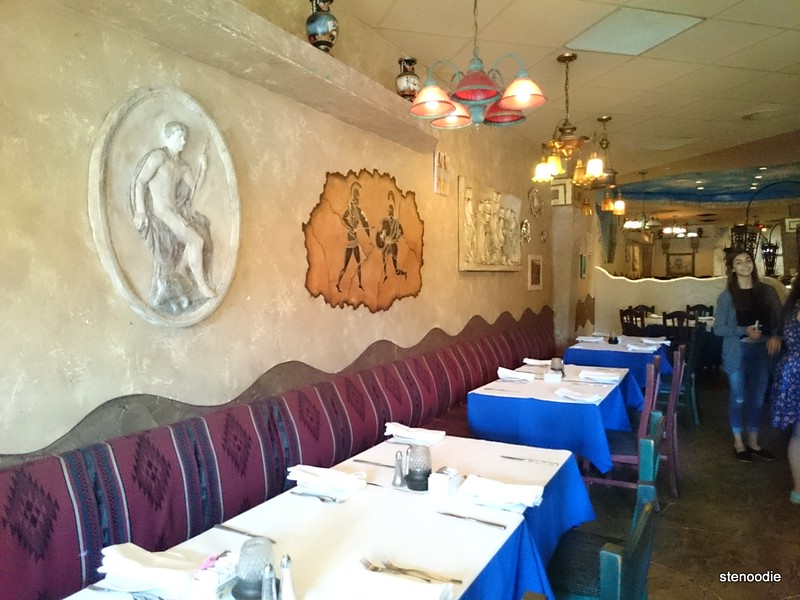 The interior of the restaurant is nicely Greek themed

All in all, it was a fantastic afternoon of getting together to eat and chat.  I won’t be returning to this restaurant as the food wasn’t that great and I feel I’ve tried all the items I’ve already wanted to get.  Their Flambé Cheese was quite unique though. 🙂

Their restaurant remained mostly empty until we left.  I hope for their sake they have a good loyal customer base..  Thanks for reading!