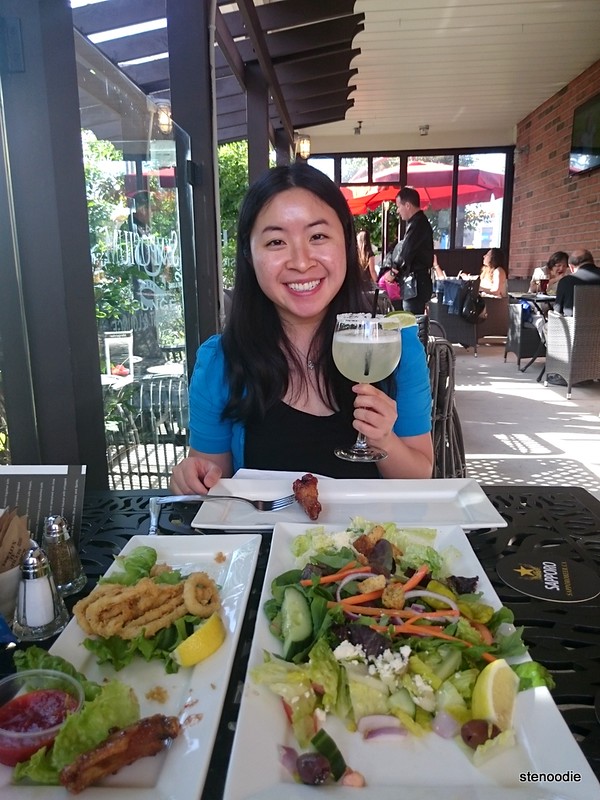 Located at 5887 Main St in Whitchurch-Stouffville

Thank you, Mary, for inviting me to the Grand Opening Party of Symposium Cafe at Whitchurch-Stouffville!

Mary found me online and contacted me on my blog to invite me to their grand opening party of Symposium Cafe!  It was an honour to be at their launch party and it was so fun to be among so many excited patrons.

Nicole and I arrived a little after our pre-booked time of 5 p.m. due to the mass group of traffic going up north.  Nevertheless, we found the restaurant easily as this location of Symposium Cafe hosts a huge sign on the side of their restaurant that you can’t miss while driving on Main St. in Stouffville.  The last time I was in Stouffville was more than a year ago when I went horseback riding with some friends at Churchill Chimes.

Upon entering, it was full party mode! Opening party!

I had been to previous Symposium Cafes before in the GTA so I knew what kind of food to expect.  However, since this was a launch party, we were all treated to an entire night of complimentary food and drinks.  It was actually incredible how generous the restaurant was.  During the whole night, we got served 9 types of appetizers, 12 types of mains, two types of desserts, and all-you-can-drink-beverages — Nicole and I got to try three drinks each!  Wow.  I was so impressed with the generosity and hospitality of Symposium Cafe. 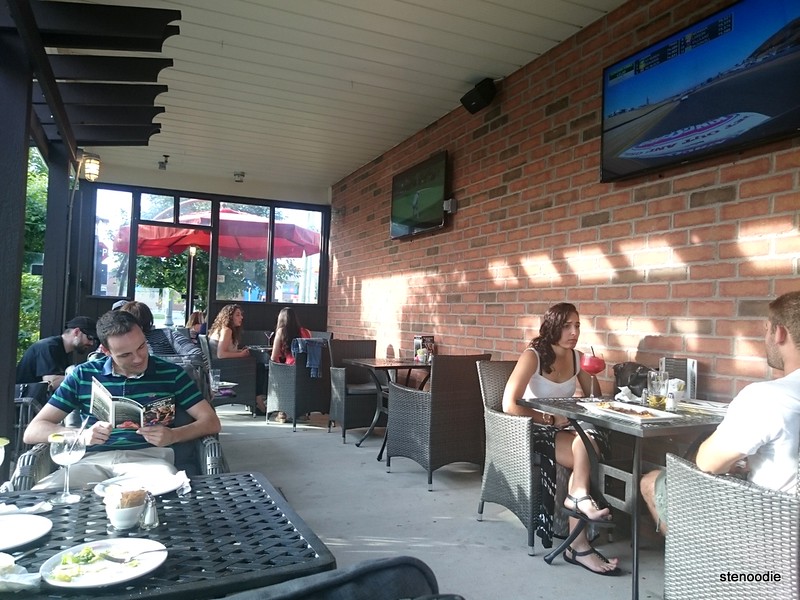 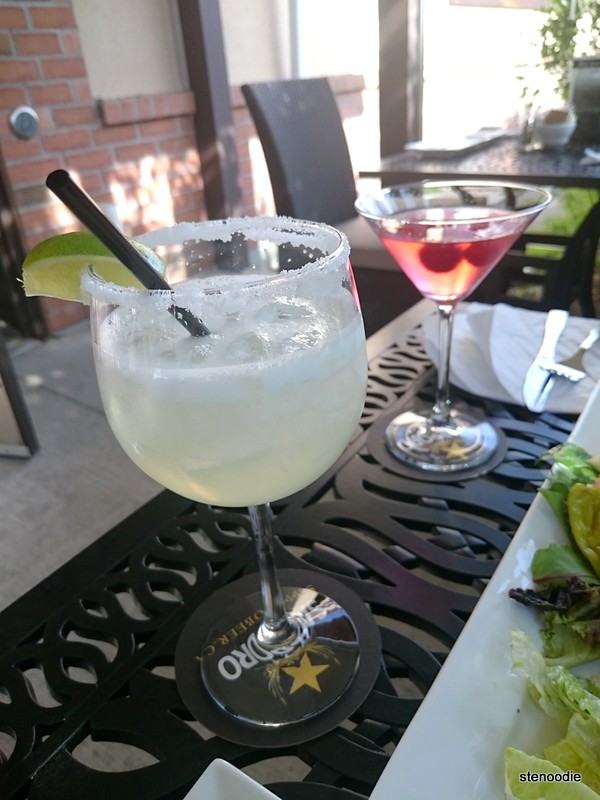 As expected, the service that night was exemplary.  Chris, our server for the night, was friendly and very capable of handling our drinks and needs.  I also got to meet Mary in person and she made sure that we were content with our food as well.

Our first drinks of the night started with a Original Lime Margarita for me and a Chocolate Raspberry Martini for Nicole.  The Margarita was a little sour as it contained lime juice and tequila, but I liked it.  Nicole absolutely loved her Chocolate Raspberry Martini even though I personally thought it tasted a little too cherry-flavoured; almost like the medicine kind.

We didn’t have to pick anything off a menu as the pre-selected appetizers and entrées appeared on our table very shortly after we received our drinks.  We were so excited to try everything! 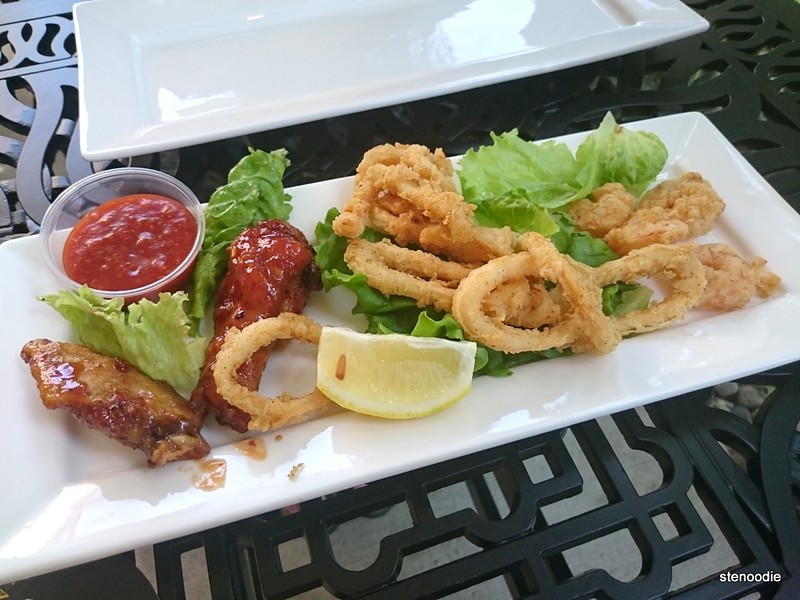 First off, we received a platter of Spicy Thai Chicken Wings, Calamari, and Cajun Dusted Shrimp.  Everything was in sample portion that night which made it fantastic to be able to try nearly everything on their menu.  I really liked the Spicy Thai wings as the flavour of the sauce was not too strong yet distinctly tasty.  The calamari was great as well as the shrimp.  What I loved most on that platter was actually the Spicy Thai Sauce.  It was very delicious! 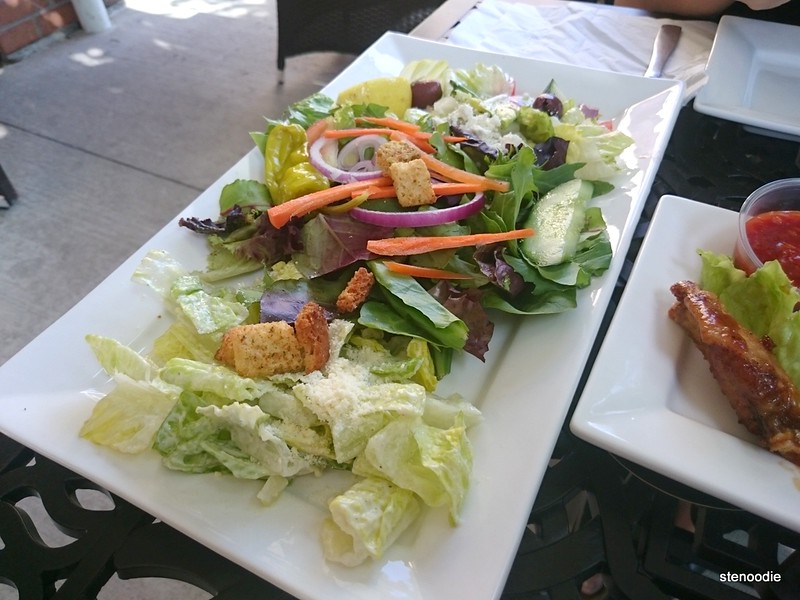 Up next, we received a platter of three salads.  A Garden Salad, Caesar Salad, and Greek Salad.  Yum!  I wished the garden salad had a little more dressing though.  I used the lemon wedge to give it a little more juice.

Part of the appetizers included a platter of flatbreads but we actually didn’t receive this until later in the night when we looked around and noticed other patrons receiving this dish.  We asked Chris about it and he quickly brought forth our last appetizer.  This contained three types of flatbreads:  Chicken Pesto, Pulled Pork, and Grilled Vegetable. 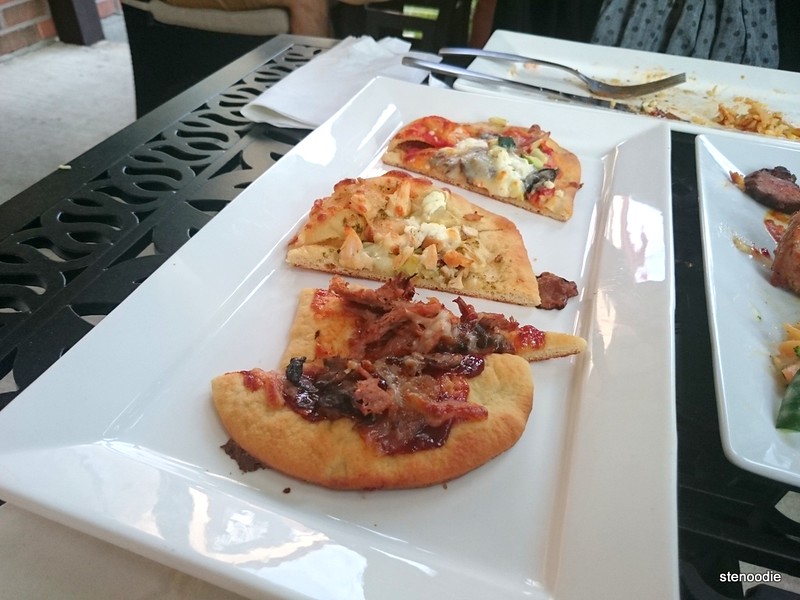 Nicole and my favourite flatbread was the Pulled Pork one.  It was very juicy with pulled pork, sauteed onions, cheese, and BBQ sauce.  The BBQ sauce was what made the flatbread sweet and tangy.

The chicken pesto was all right and the grilled vegetable flatbread was pretty good.  The downside of both of these flatbreads was in the way the flatbread was cut — it meant that we got the edge of the flatbread which contained no filling or toppings.  It was unfortunate since one of us couldn’t taste all the toppings on a flatbread edge. 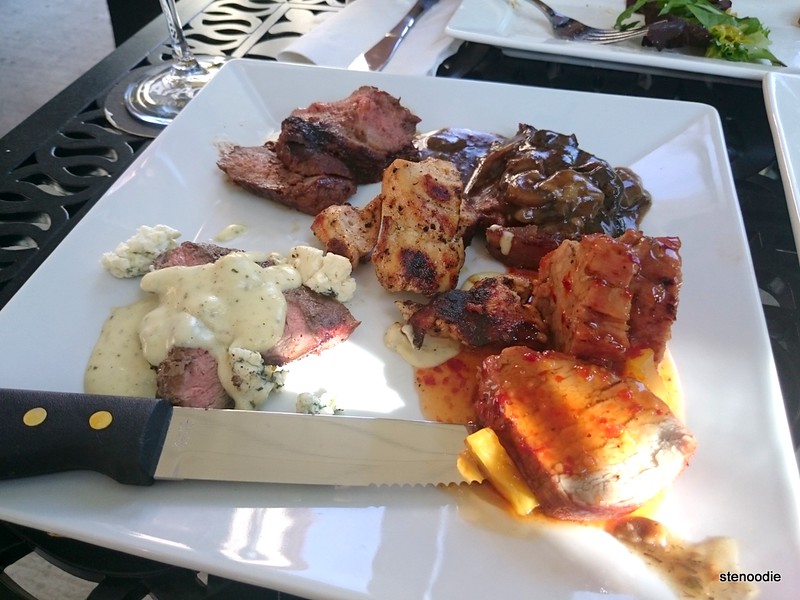 Up next, we received the entrées!  Like the appetizers, we also got three plates of entrées with more than one entrée on each plate.

The rest of the meats on the platter were a little disappointing as they were a little rough and tough to chew through.  I liked the Thai pineapple sauce and the mushroom demi-glaze sauce a lot though!  The chicken souvlaki was the toughest to chew through; it was a little burnt. 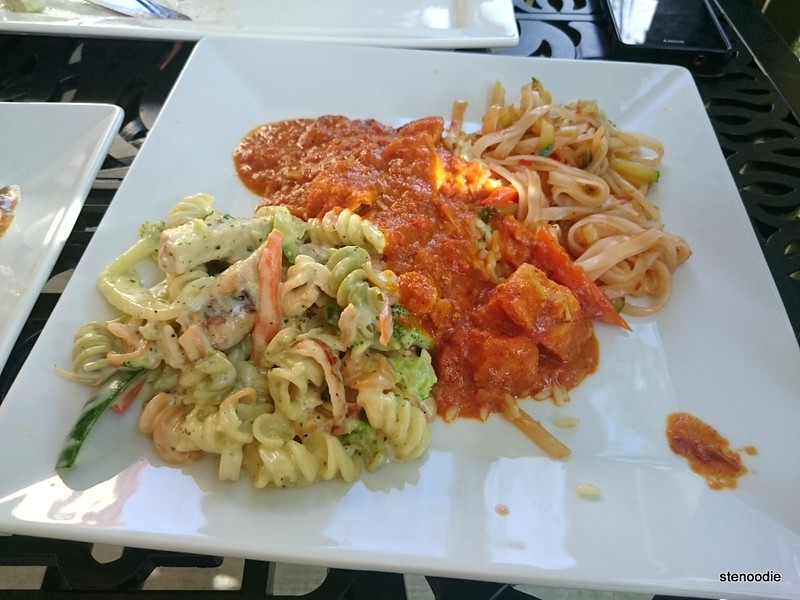 Our second entrée plate contained rice and noodles!  We had a sampling of Butter Chicken Rice Bowl,  Shrimp Fusili, and Vegetarian Pad Thai.  I really enjoyed the rice from the butter chicken rice bowl as the grains were well done and yummy.  The butter chicken sauce was all right and the chicken chunks were a little rough.  The Vegetarian Pad Thai is a customer favourite and quite spicy.  It was not bad though.  The fusili contained lots of vegetables in a rose sauce. 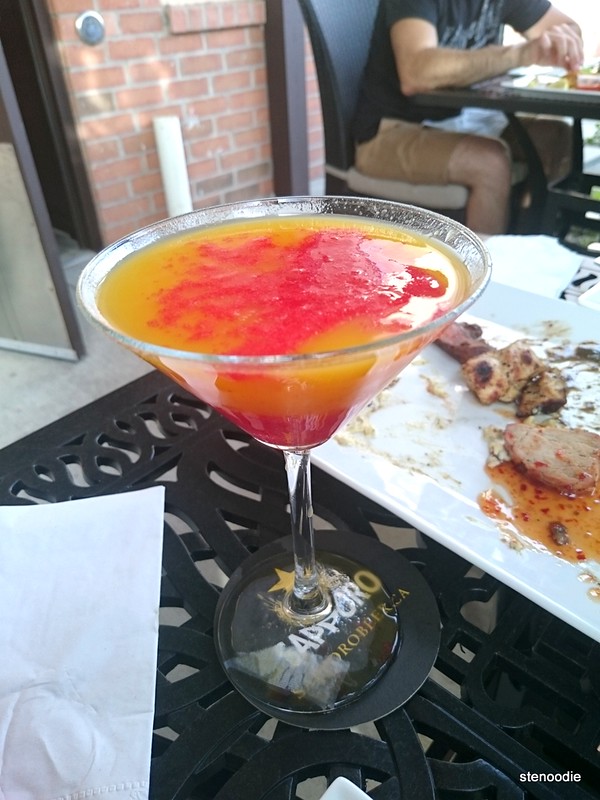 By this point, we were on to our second drinks.  I actually finished this one in a jiffy since it was so refreshing and it helped me to increase my appetite a little bit — the citrus juice helped.  I had the Mango Passion Martini.  This cocktail was absolutely delicious!  I highly, highly recommend this martini if you come here!  It contained shaken mango juice that was layered on top of strawberry puree.  It was absolutely delicious!  The mango overwhelming overtook the taste of the strawberry but it was a great mango drink!  I finished it so quickly! 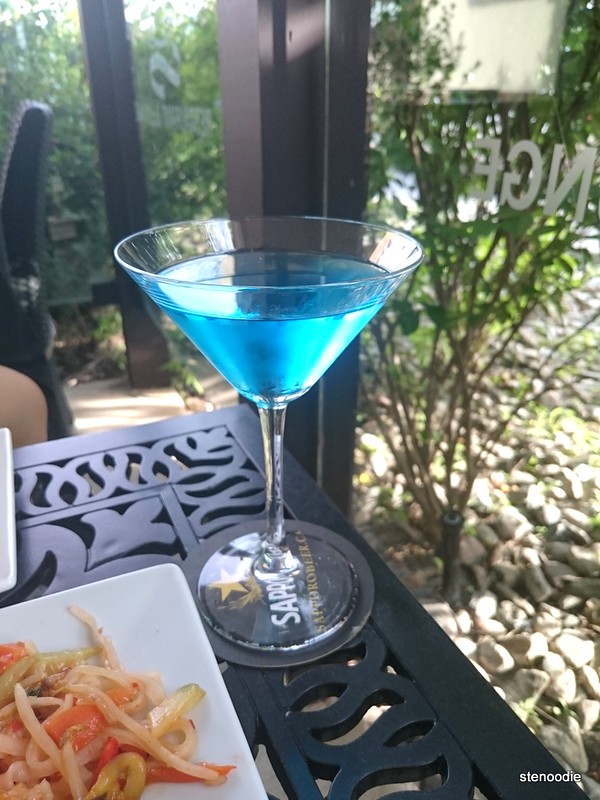 Nicole ordered the Chocolate Kiss Martini.  Even Chris said he made sure that this was a chocolate martini before serving it to us because on first glance, it doesn’t look like chocolate at all!  One of the ingredients in this is the Blue Curaco which makes the entire drink look blue.  I smelled it before I tried it and it actually smelled so chocolatey and delicious.  Yum!  I really liked the taste of it too! 🙂

Back to the food.  Our third platter of entrée contained fish!  We had Teriyaki Grilled Salmon, Mediterranean Tilapia, Blackened Tilapia, and Atlantic Salmon in Dill Sauce.  My favourite from this round was the Atlantic salmon in dill sauce.  This salmon was relatively soft and the dill sauce made the flavour stand out.  The Mediterranean tilapia was fresh as it contained lots of diced vegetables and olives in a white wine sauce.  Yummy!  The teriyaki grilled salmon was a little crispy to me and tough to eat.  The blackened tilapia was so-so. 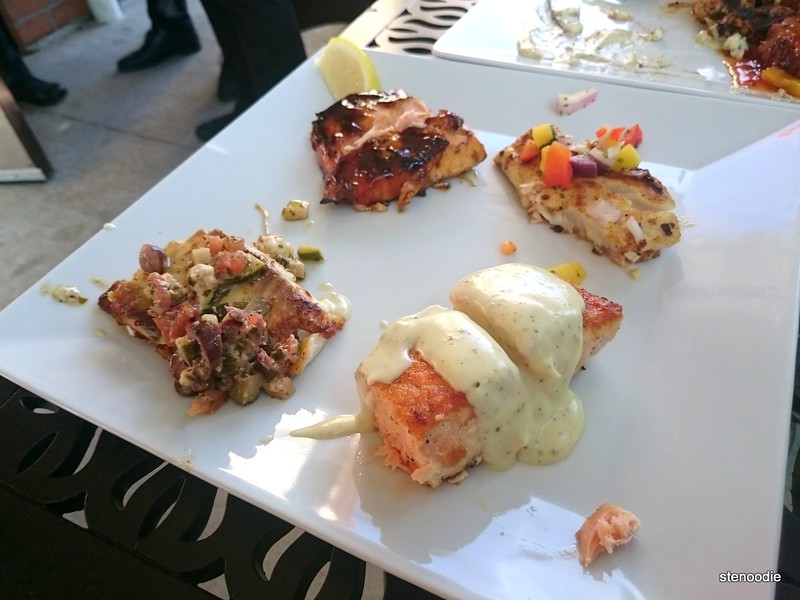 Last but not least, before we got to the desserts, we ordered our final round of drinks.  I was a little tipsy at this point but very happy to be enjoying all the food at Symposium Cafe with the drinks.  This time, I ordered a Peach Martini from a suggestion from Nicole (since I was enjoying my fruity cocktails so much) and Nicole ordered a Dooley’s Drizzle Martini. 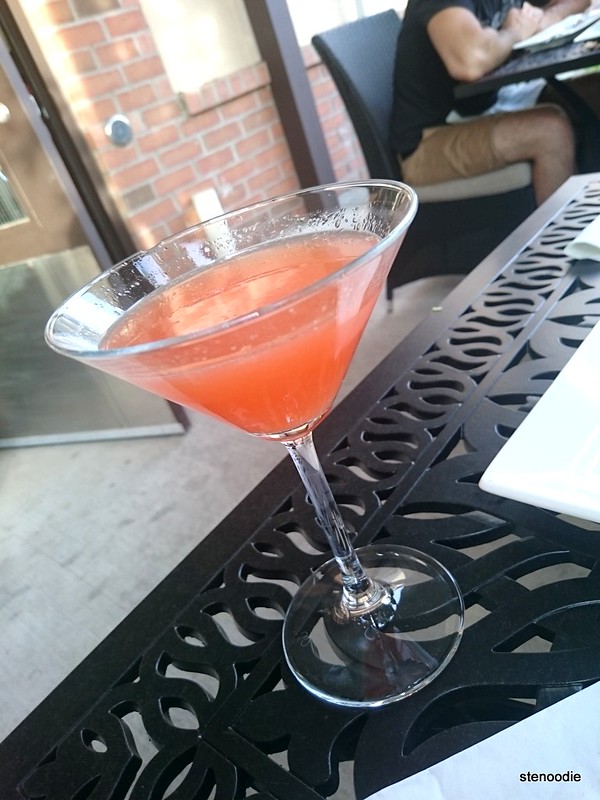 I, again, enjoyed my choice of the Peach Martini as I found it very refreshing and fruity.  It contained vodka, peach schnapps, and cranberry juice splashed with orange juice.  Yum!  The fruit acids in this definitely helped me to speed up digestion.  I also was able to finish this quickly. 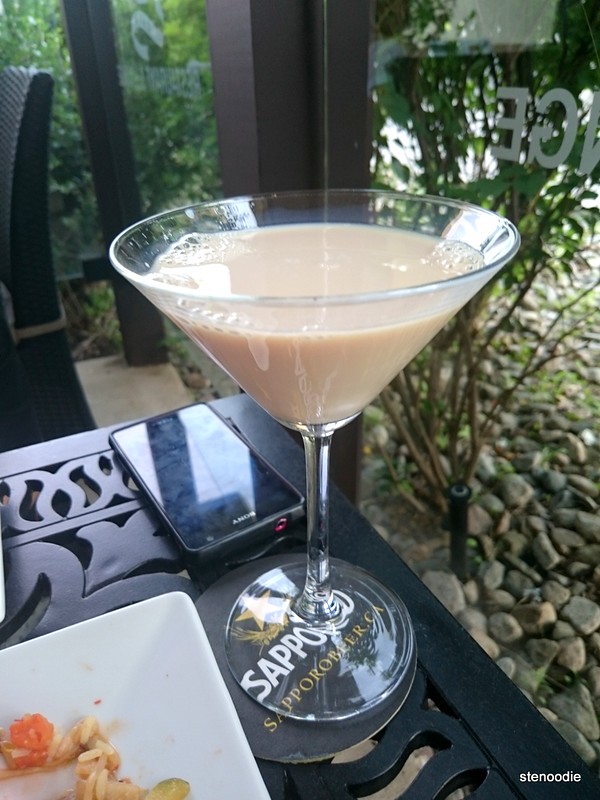 Nicole ordered a Dooley’s Drizzle Martini that contained Dooley’s toffee cream and banana liqeur layered on top of chocolate syrup topped with whipped cream and chocolate chips.  Despite all that, when I tried it, it tasted like Bailey’s with an aftertaste of slight toffee.  It was interesting but not special since it didn’t taste that outstanding.

For dessert, Chris advised that we could go out into the restaurant floor and choose a dessert of our liking from the selection of cakes that were in the display case.  Remember when I remember to the Yonge location of Symposium Cafe (coincidentally for Nicole’s birthday) and ordered three cakes?  Their signature Sky High Carrot Cake was definitely showcased here as well as the fudge brownie cheesecake that we had shared last time.  This time, the Tuxedo Chocolate cake called its name to me.  Nicole chose the strawberry with white chocolate cake. 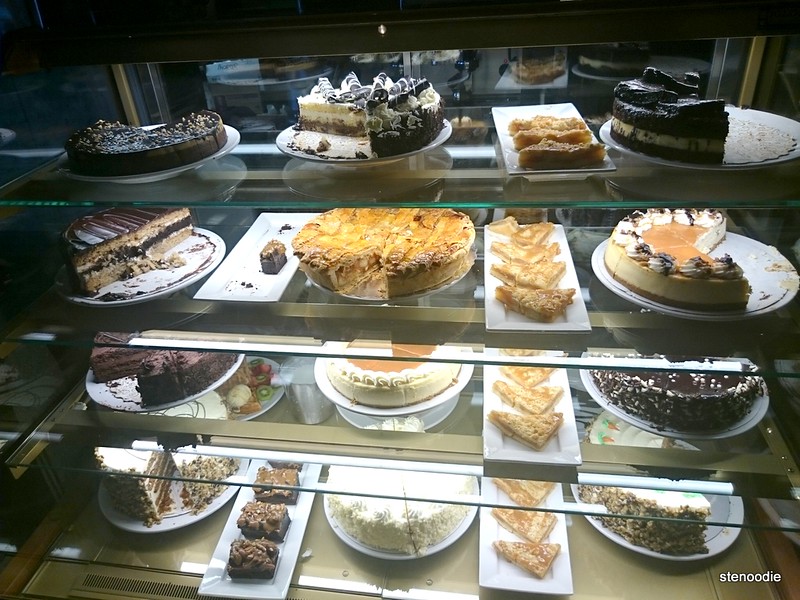 Look at this incredible cake selection!!

Yum!  The Tuxedo cake contained three layers of mousse but it actually didn’t taste that heavy at all.  Each layer was light and the chocolate cake was delicious and moist.  Delicious!  I actually finished my entire slice which shocked Nicole considering how full we both were at that point. 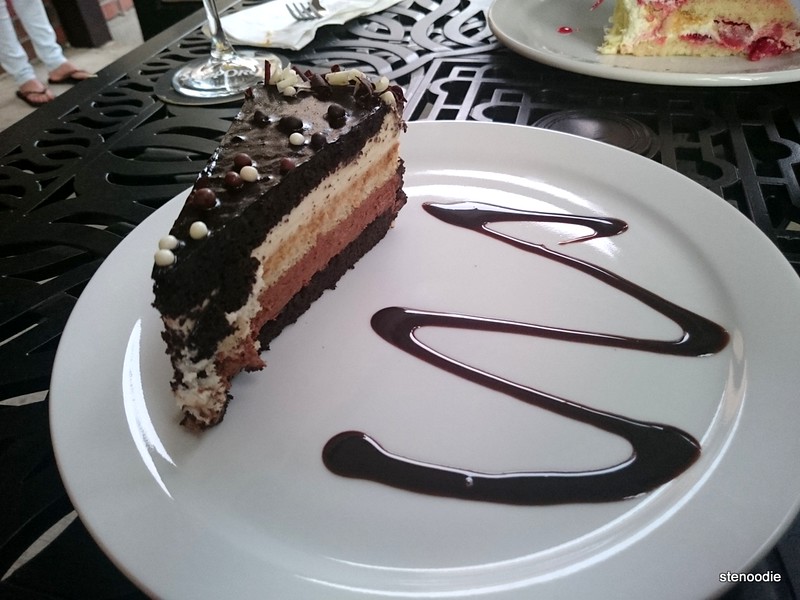 I tried the strawberry cake that Nicole chose and appreciated how light it tasted.  The strawberry was delicious as well as the light white chocolate swirls on the side of the cake.  Delicious! 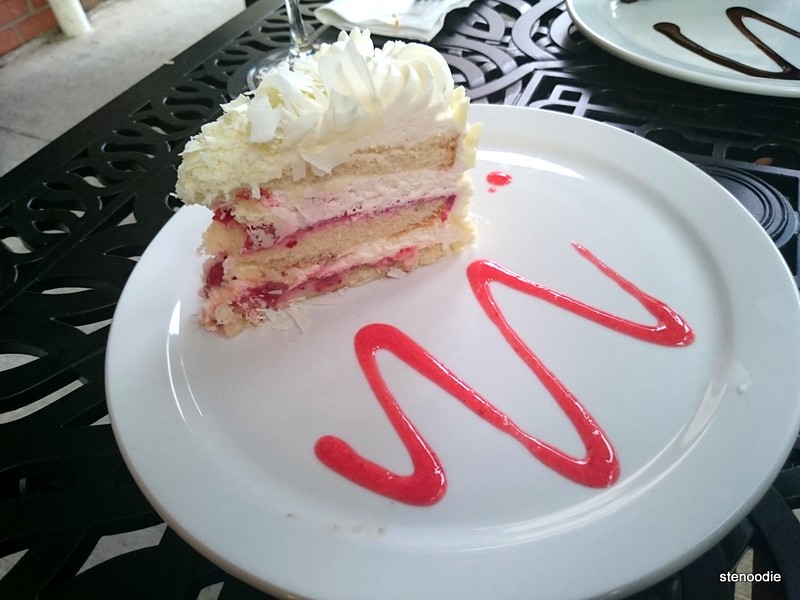 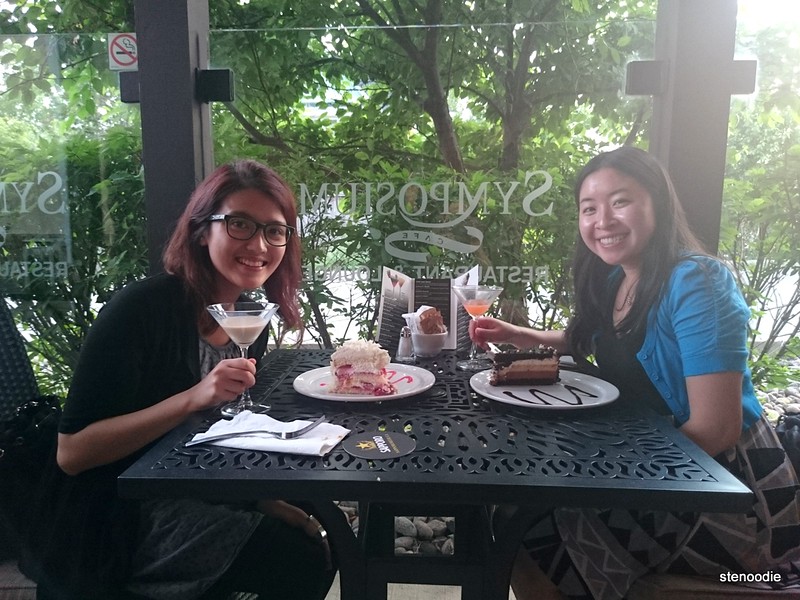 What a most lovely summer night!

All in all, I can say for a fact that I’ve never had so much to eat in one sitting for a long time.  It’s really been a while since I had so much food.  I didn’t even have this much food at the buffets in Las Vegas recently.  Thank you so much for the invite, Mary and Symposium Cafe.  It was a beautiful night of eating, great dining, good company, service, and fun.  Thanks! 🙂 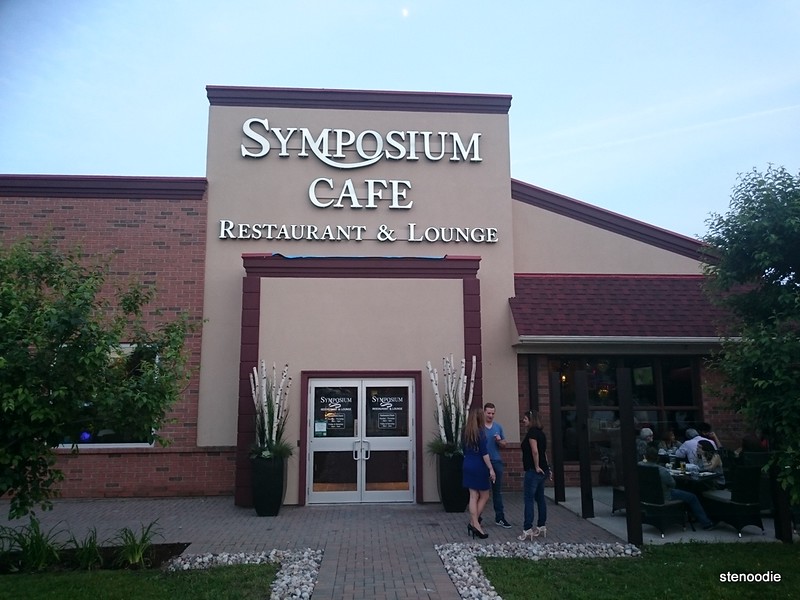 Symposium Cafe is located on Main Street in Stouffville. You can’t miss it! 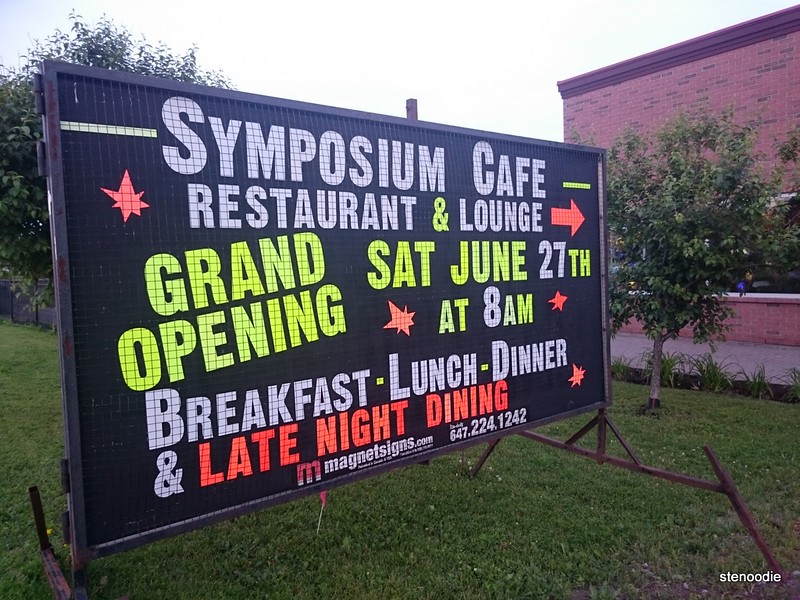 The next day was their grand opening

FTC Disclaimer:  Although Symposium Cafe reached out and invited me to a complimentary meal to review their restaurant, the opinions expressed here represent my own and not those of the restaurant.