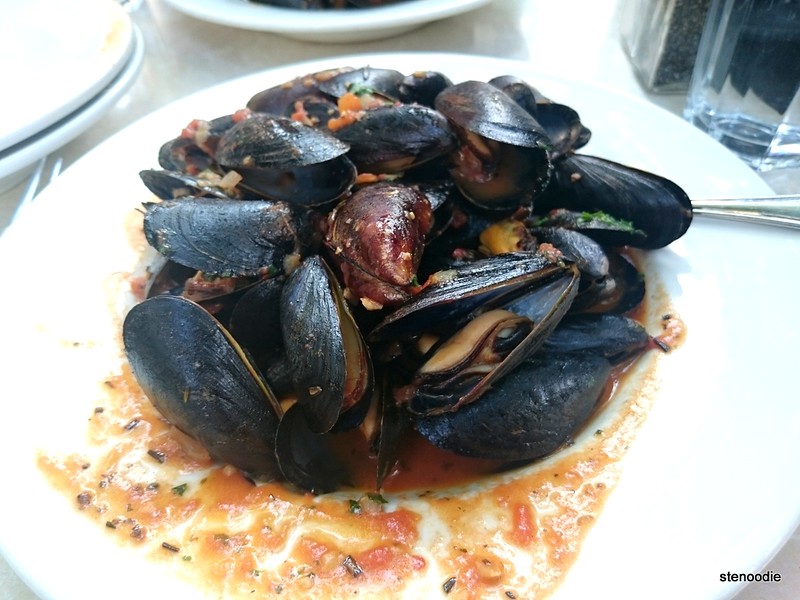 Located at 19 Baldwin Street in Toronto

Another summer, another Summerlicious line-up!  If you aren’t aware already, Toronto features a selection of high-end restaurants who offer prix fixe menus for three weeks each summer and winter.  For this year’s Summerlicious event, the event has been extended for a little more than three weeks due to the Pan Am Games being hosted in Toronto.

Summerlicious started on July 3 this year and Sophia and I were able to make it to this first day of Summerlicious by dining at Valens.  We chose this restaurant based on its proximity to the art exhibit that we were attending right after dinner (close to Queen St West where we had dinner at Queen Mother Cafe last time).  There are so many restaurants on Baldwin Street that I still haven’t tried them all yet.  It gave me great pleasure to be able to dine at another restaurant in this lovely neighbourhood! 😀  Valens serves Italian food. 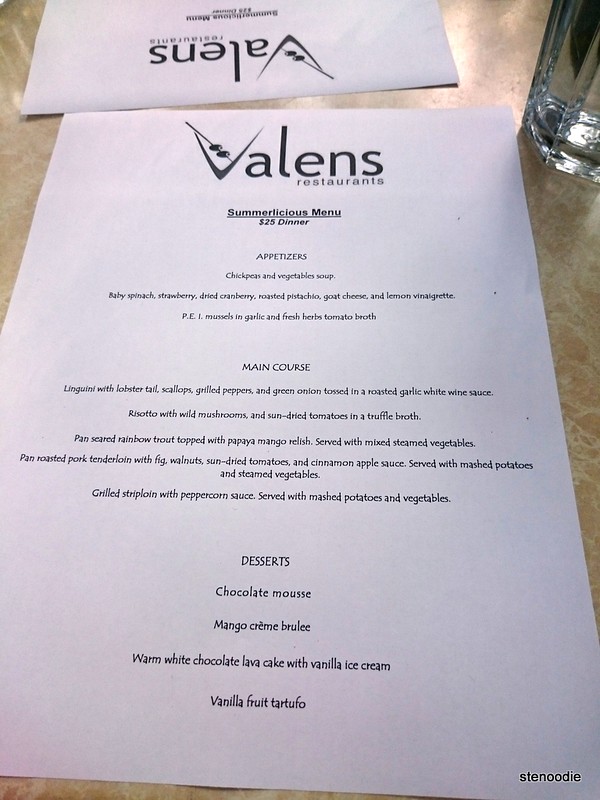 It was a pleasant summer evening so we were able to dine outside on the patio.  Our server for the night was an incredibly friendly man who had the brightest smile I’ve ever seen for someone working in the food services industry.  It made for a very lovely evening as the service was friendly and warm.  Our food also arrived timely and I appreciated our server’s concern for us as a bee kept intruding on our meal.  Good thing the bee didn’t stay that long otherwise I was seriously entertaining the server’s offer of moving our meal to the inside of the restaurant!

After we chose our dishes from the prix fixe menu, we received our first appetizer of the night fairly quickly.  Nice!  Sophia and I both ordered the P.E.I. Mussels. For an appetizer, it was definitely in a gigantic portion!  There were many, many mussels in the garlic and fresh herbs tomato broth.  Sophia was uber impressed with the portion!  I was too, but I found it actually very similar to the mussles appetizer that I’ve had before at Sambuca, which was ironically located right next to this restaurant.  As a matter of fact, from my seat, I could see Sambuca and its patio since we were sitting outside.  The portion size, quality of mussels, and even the consistency of the sauce were so similar.  It made me wonder if the chefs were the same. 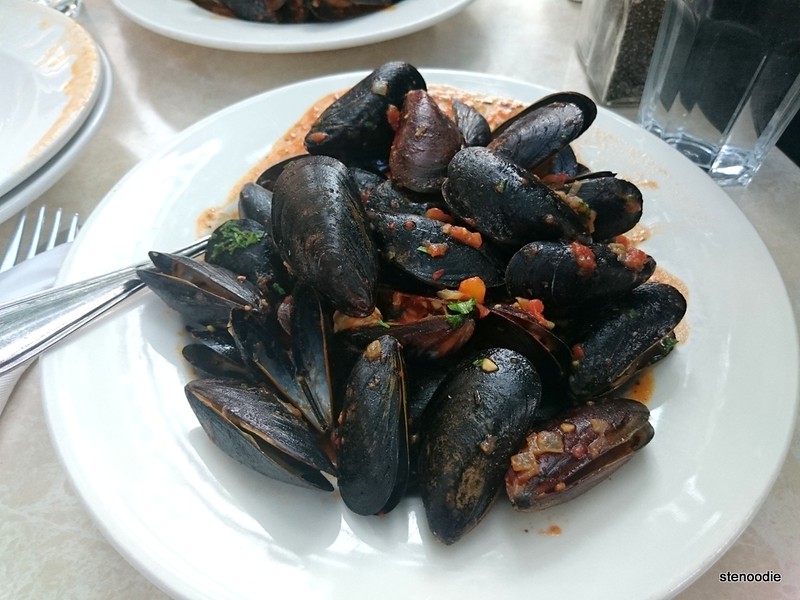 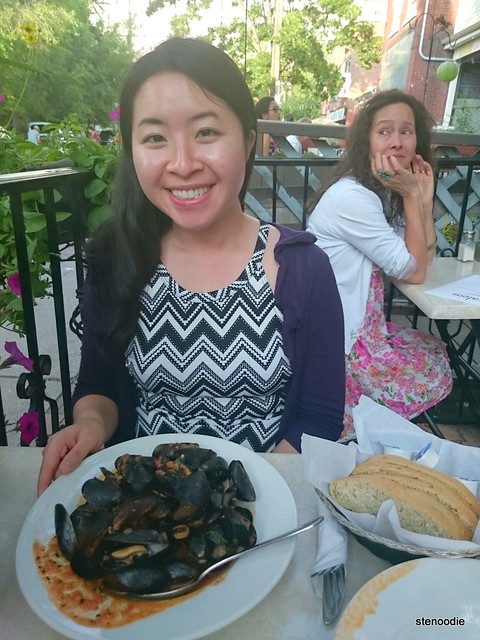 With my lovely dish of P.E.I. mussels — really great portion! 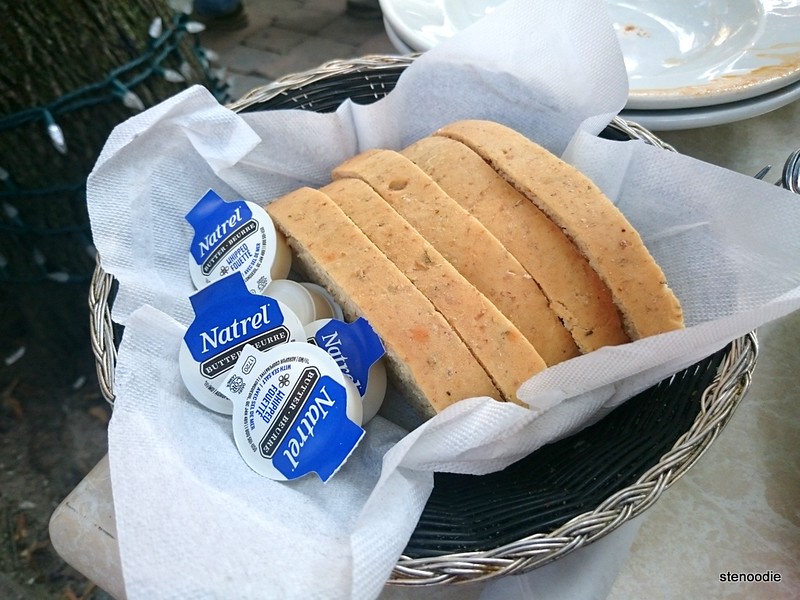 Lovey basket of bread that I wish I could have eaten more of with the tomato broth.  I didn’t because I didn’t want to spoil my appetite for the rest of dinner!

We also received our basket of bread at this time.  I found that it was perfect to dip the soft slices of bread into the tomato broth.  The bread soaked up the broth and made such a delicious appetizer in itself.  It was like a platter of mussels plus a serving of soup as a bonus.  This was a really good pick!

Our entrées arrived quickly.  I ordered the Linguini with lobster tail, scallops, grilled peppers, and green onion tossed in a roasted garlic white wine sauce while Sophia ordered the Pan Seared Rainbow Trout that was topped with papaya mango relish and served with mixed steamed vegetables.  I actually wasn’t planning on ordering the Linguini at all and leaning towards the Grilled Striploin with mashed potatoes but the moment that I noticed that the Linguini was served with lobster tail, I definitely wanted to try their lobster.  (I love lobster!) 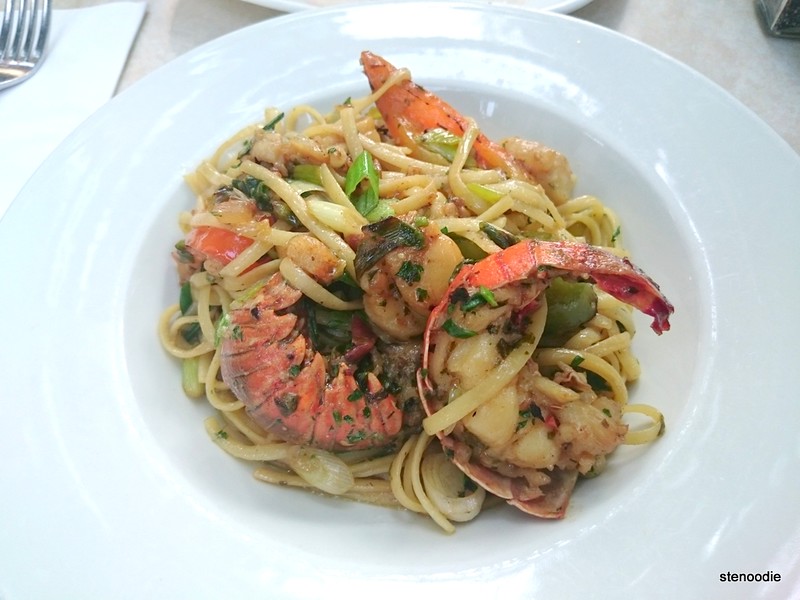 It was a good choice as the lobster tails were cooked well and seasoned with the garlic white sign sauce.  I also liked the linguini and grilled peppers since the sauce was infuseed into the pasta and each strand of linguini had a good texture.   However, I felt that the scallops were a little more cooked than it needed to be which meant that it tasted just a little rough.  However, the overall feeling for this dish was a solid good one. 🙂 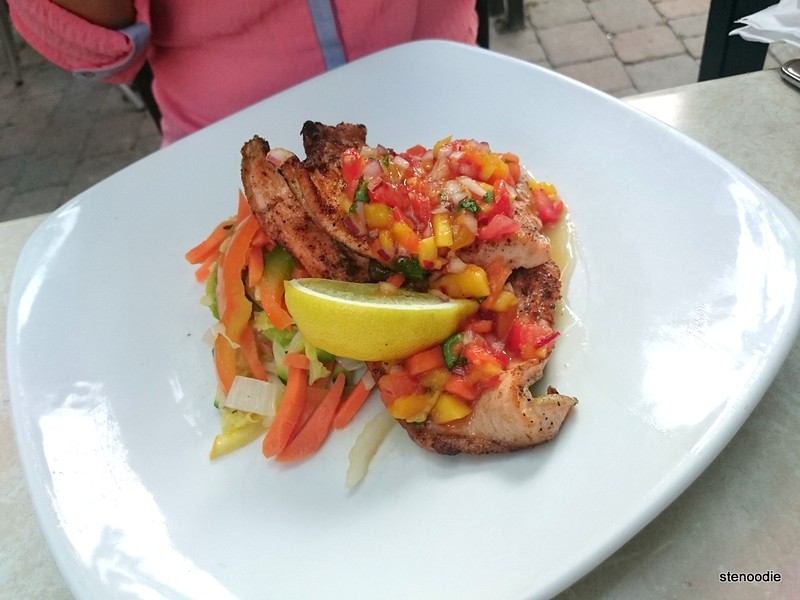 I tried Sophia’s rainbow trout and was impressed with how soft it tasted.  It actually tasted a little like salmon and Sophia thought so too.  She enjoyed the papaya mango relish but not so much the steamed vegetables.  We were relieved to find that the portion of the appetizer didn’t foreshadow the size of the main otherwise we wouldn’t have been able to finish so much food!  In this case, the portions of the mains were perfect. 🙂 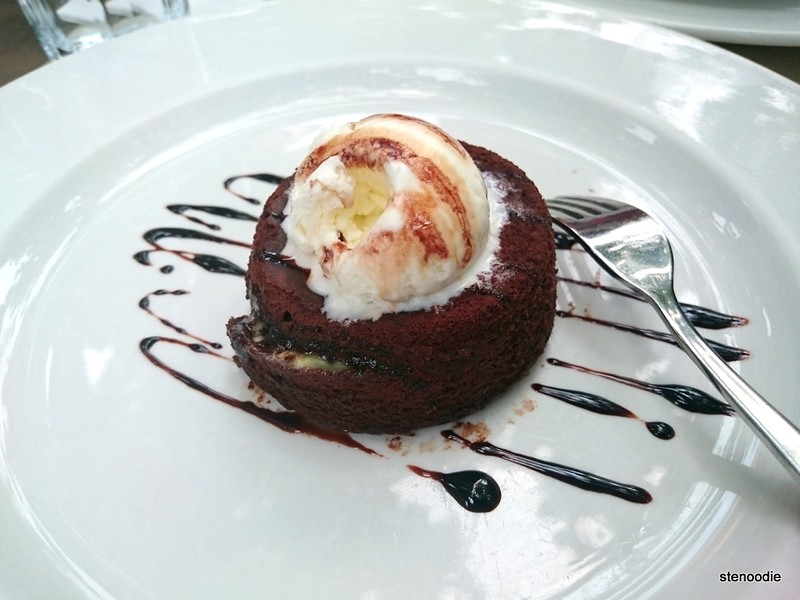 I loved the look of my Warm White Chocolate Lava Cake!  It was so cute and the scoop of vanilla ice cream was perfectly placed on top of the cake.  Yay!  The first bite informed me that it was a solid chocolate dessert that was moist and soft.  During the last couple of bites though, the lava cake tasted a little mushy like bread pudding to me which I found interesting.  I still loved it though and finished it in a jiffy. 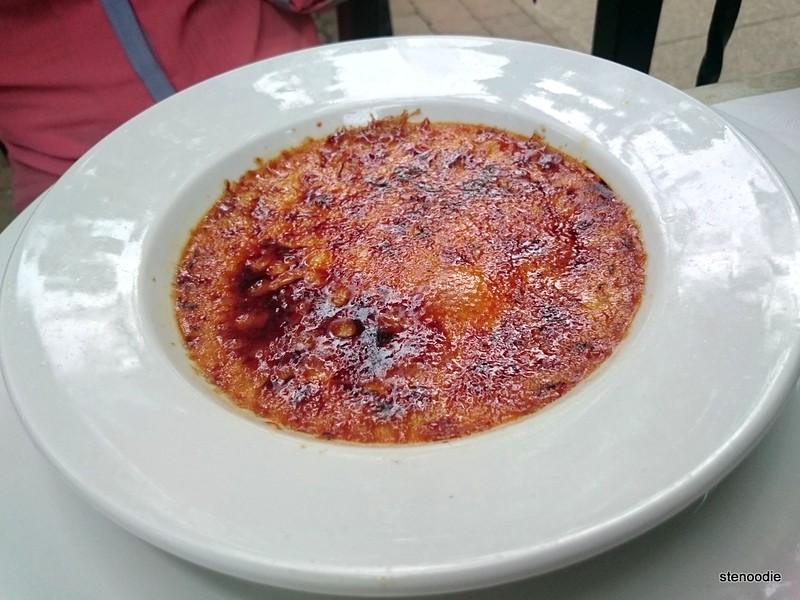 On the other hand, Sophia, being a huge crème brûlée fan, found that hers was a little lackluster.  I tried a bite of it and I liked the crackly glazed top but found that it lacked a little mango flavour.  It was cute how the dish was so shallow too.

All in all, it was a good solid night of food and the portions were definitely enough to fill us up two times over (really good too for a prix fixe $25 meal).  If I wasn’t attending an art exhibit after the meal (not wanting to carry a doggy bag), I would have packed some of the linguini home to enjoy instead of trying to stuff everything into my stomach.  Alas, it was a great first Summerlicious night!  I can’t wait for more prix fixe meals during these upcoming three weeks! 😀  Are you going to any Summerlicious restaurants?  If so, which ones?  Share below! 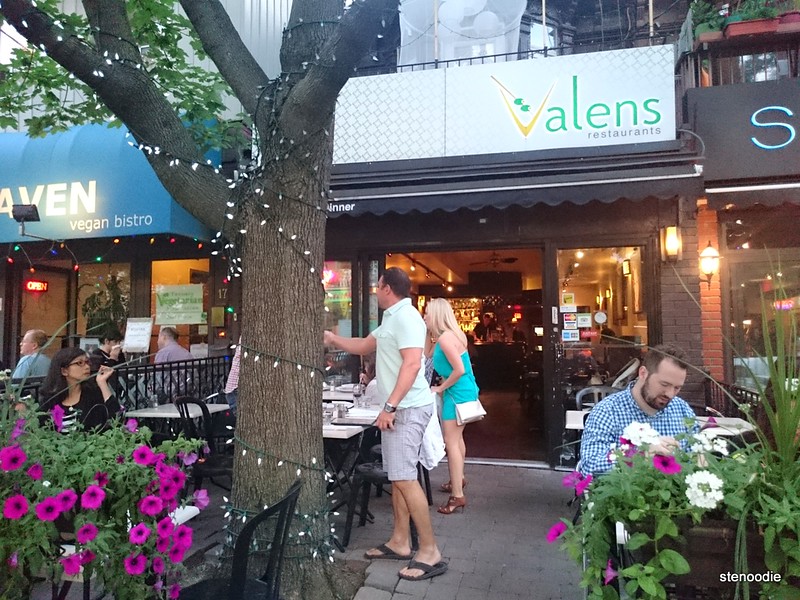 (Fun Fact:  I’ve been so backlogged on posts for many months that this is the first restaurant review post that’s posted the day right after I went to the restaurant.  Hurray! 😛  I like to post reviews chronologically when I can [with the exception of travel posts.. those ones are still backlogged.])