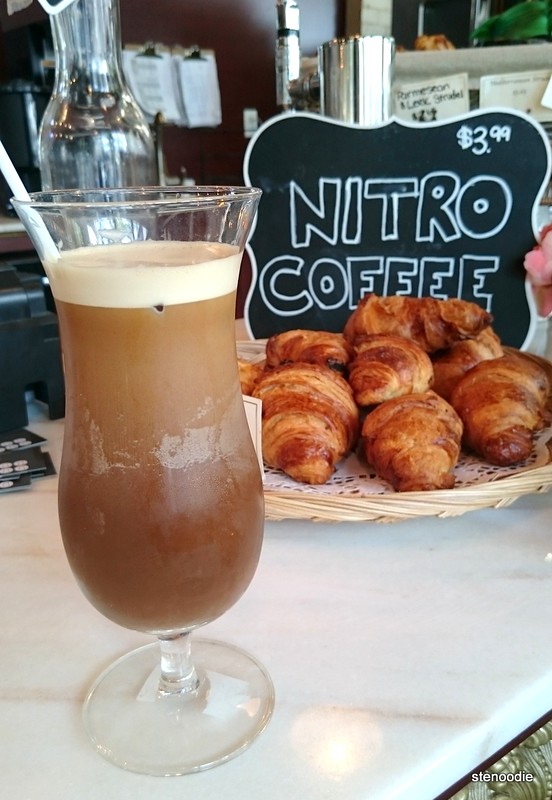 I had the pleasure of visiting a really cute and little known cafe called Bakery & Kaffee Haus yesterday.  It is located on a popular street inside Queen Live Market on Queet St West by University (in front of the 299 Queen Street West/MuchMusic/Bell Media Queen Street) but I’ve never gone in until now.

Speaking to Eva, the one who graciously invited me, she told me that the cafe only opened a year ago and she herself had been working there for two months.  The cafe is Viennese themed, with a few seats for you to take to enjoy your treats while looking out onto Queen St West.  It’s a very Parisian thing to do and it is definitely a great spot to relax and people-watch (if you’re into that kind of thing, which I am :)).

Bakery & Kaffee Haus serves beverages like coffee and tea and pastries like croissants, macarons, and cronuts ( I’ll talk about that more later).  They offer free wifi and is a popular spot in the morning for a quick bite and coffee run, lunch, as well as afternoon sweet tooth cravings.  All of their goods are displayed nicely and even the frames of which the chalkboard menus are written on are hand-painted by an artist.  It is truly a really cute place to be at! 🙂 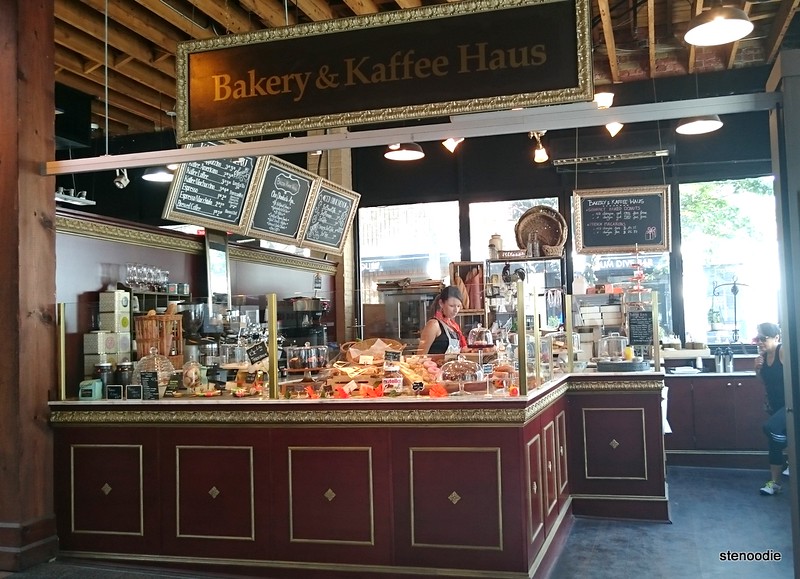 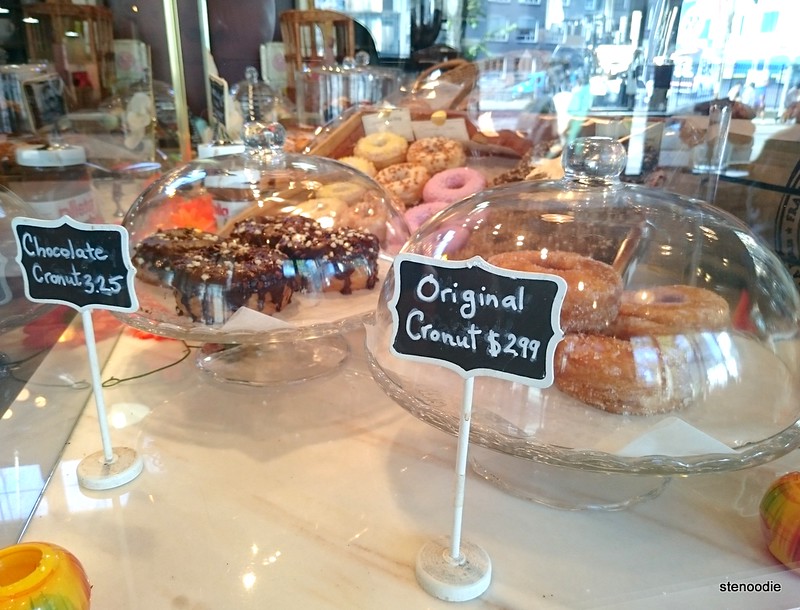 They have 3 types of Cronuts: Original, Chocolate, and Nutella

One of their specialties that no other cafe has in Toronto right now (at least so far it seems) is a new coffee called Nitro Coffee.  It is an iced brew coffee that is treated with nitrogen so that it is smooth, bubbly, and its texture is similar to beer.  It even comes out from a tap!  I was so excited to try it as I had never seen something like this before. 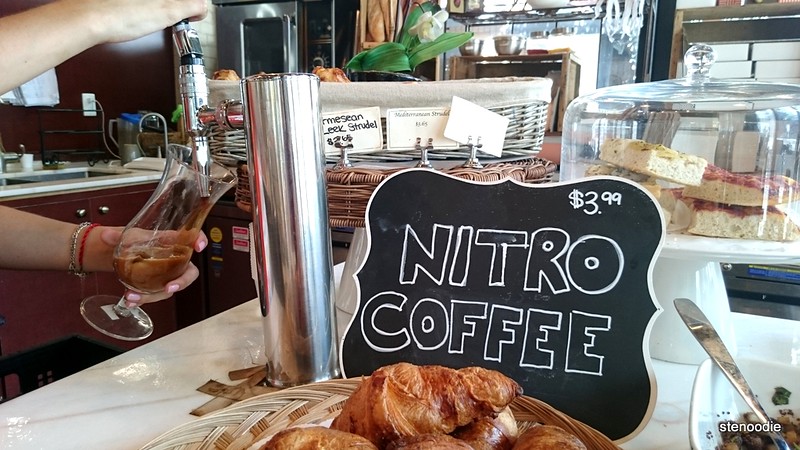 The pouring of the Nitro Coffee from tap! 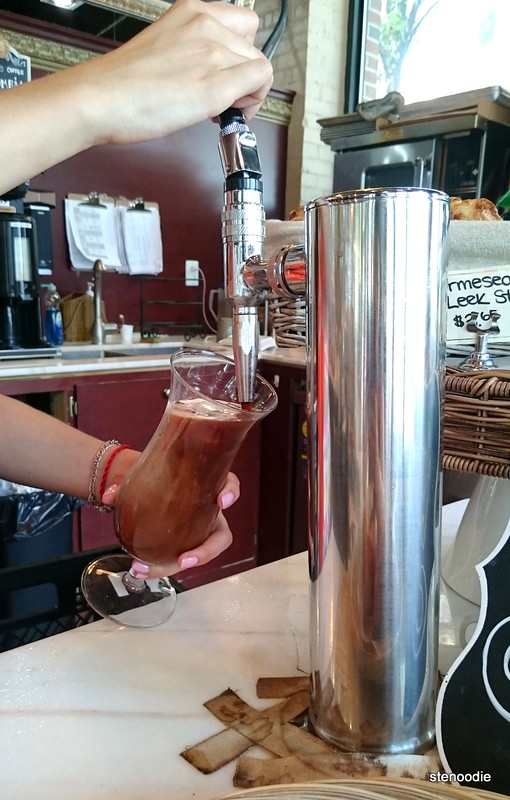 In addition to the nitrogen, having it on tap gives it that smooth, bubbly texture 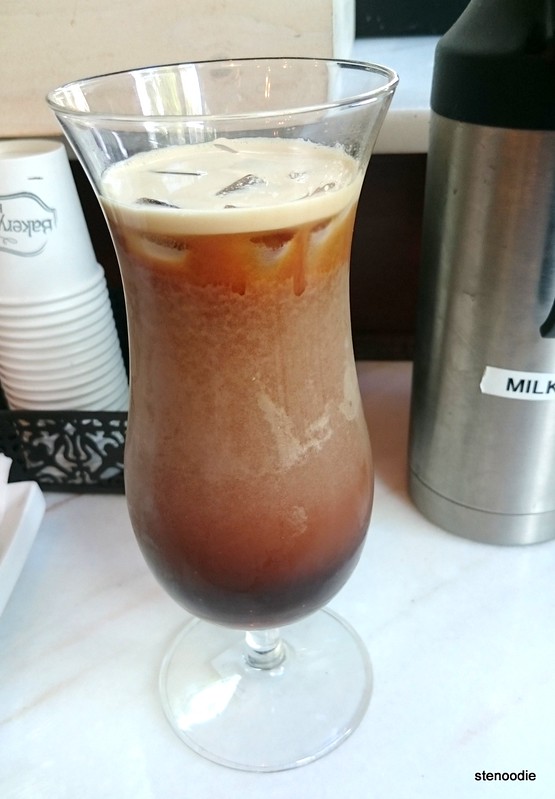 When you add milk or cream into the cold glass of nitro coffee, there is also some unique pattern that appears.  Pretty neat!  You drink it with a straw and the taste is so smooth like a beer’s consistency yet has a strong taste of coffee.  In fact, nitro coffre is 40% stronger than regular coffee due to its nitrogen treatment.  It was really neat to feel like drinking beer but actually to be having an iced brew coffee.  It was perfect for a hot summer day! 🙂

Bakery & Kaffee Haus is also known for their donuts and cronuts.  A cronut is a croissant-doughnut where you can see and taste the different layers of soft croissant flakes.  They have Original, Chocolate, and Nutella cronuts.  Eva recommended the Chocolate one for me.  I love anything chocolate! 🙂 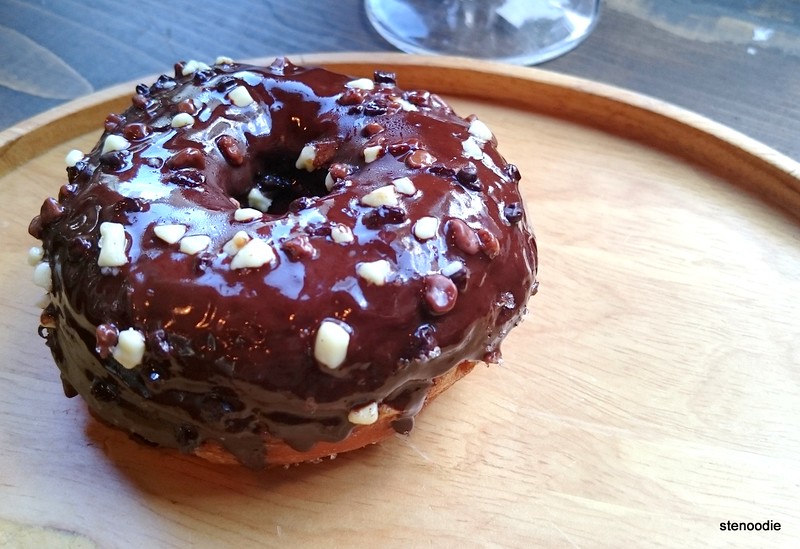 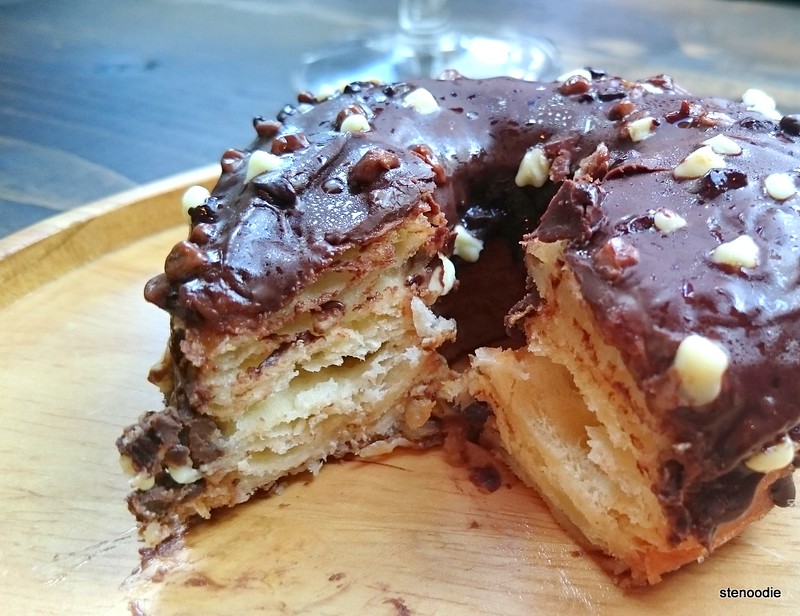 Look at the soft croissant layers!

I ate it with a fork and knife.  It was delicious!  It was soft to cut and you could taste all the layers with the chocolate on top.  I really enjoyed it! 🙂 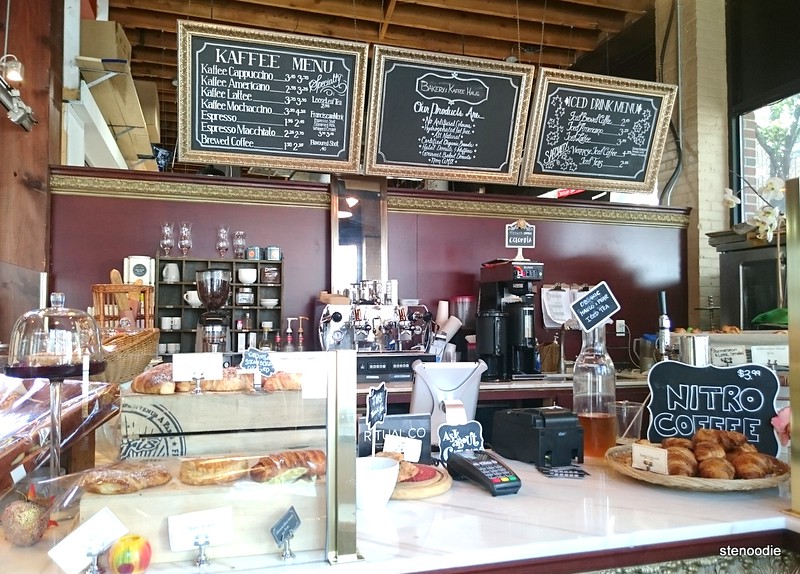 They have a variety of expresso, lattes, teas, coffees

Bakery & Kaffee Haus also has macarons that are popular and other donuts and pastries.  Just two days ago, they also launched some lunch selections like sandwiches and salads!

They have free wifi for your perusal and a quiet and sweet environment for you and a friend to rest for a short break over some treats.  You should definitely try their Nitro Coffee and Chocolate Cronuts! 🙂

Thanks for inviting me, Eva and Bakery & Kaffee Haus! 🙂 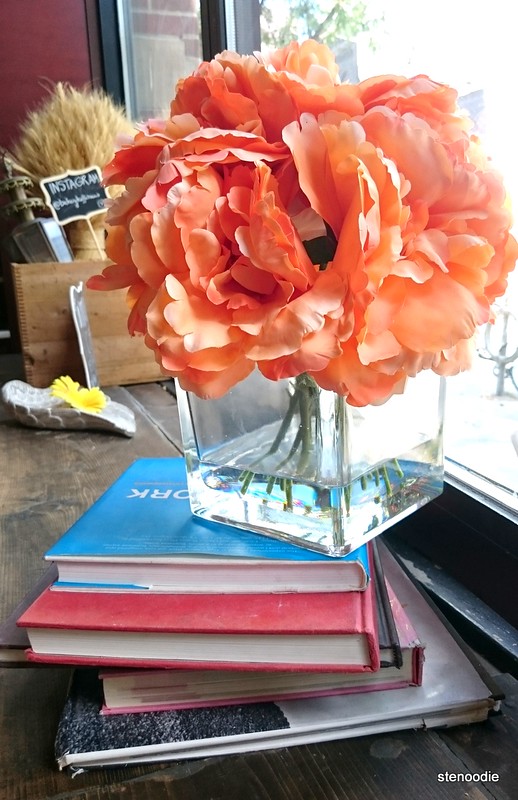 The atmosphere at the cafe is very relaxing, quiet, and chic 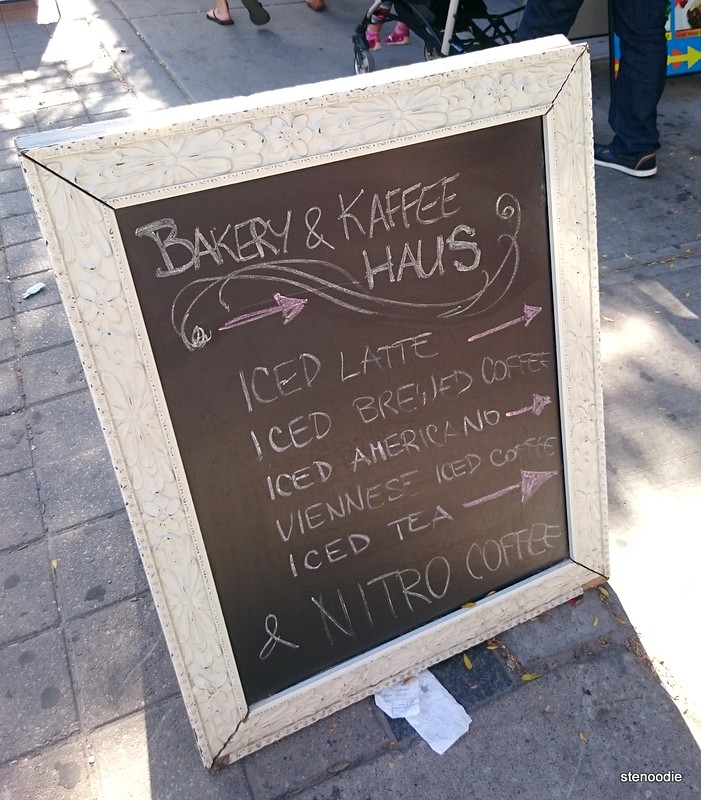 Try their Viennese Iced Coffee too 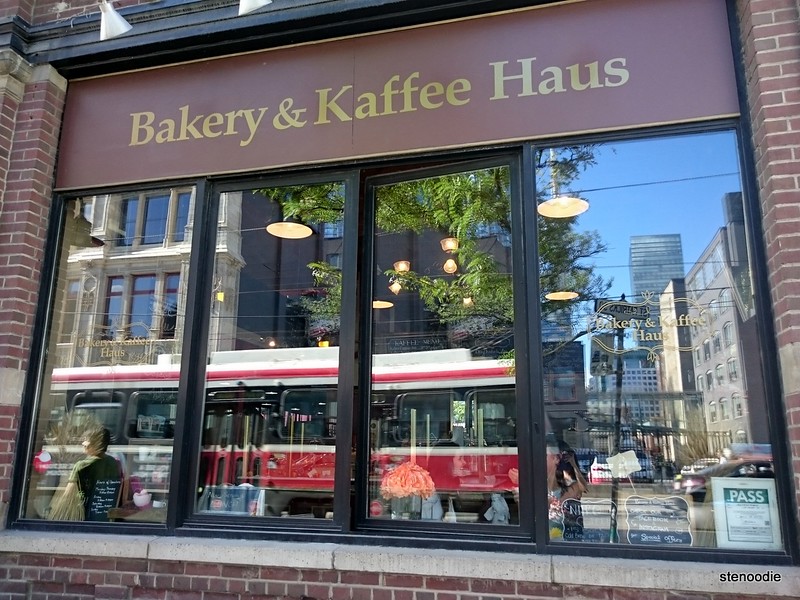 Easy to miss, but it’s at a very prominent location in downtown Toronto!

FTC Disclaimer:  Although Bakery & Kaffee Haus reached out and invited me to a complimentary tasting to review their restaurant, the opinions expressed here represent my own and not those of the restaurant.