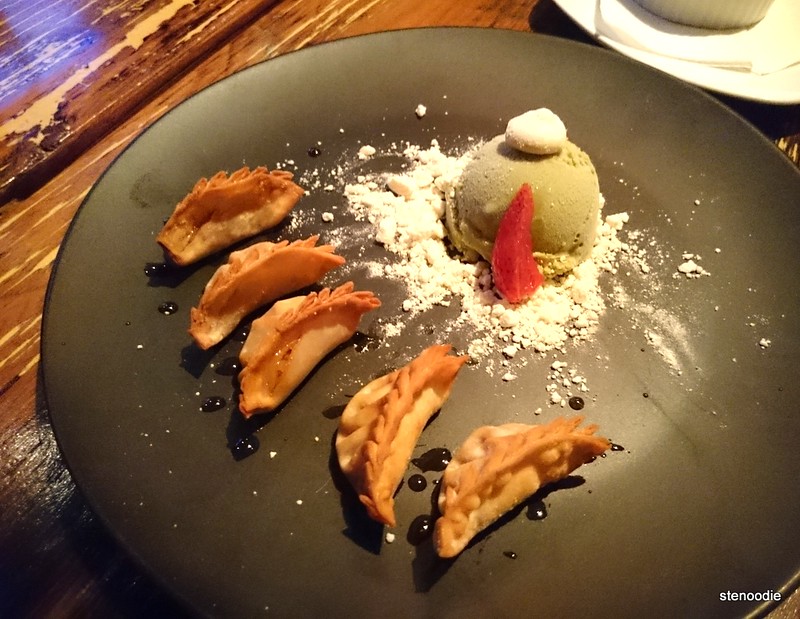 It’s been a while since I’ve been to an izakaya and I just love sharing small plates of food because you get to try so many dishes! 😀  Stephen and I went to Hapa Izakaya on a Friday evening.  Unfortunately, I was a bit late so I thank Stephen for his patience as he waited for me to arrive.

Hapa Izakaya is a Japanese tapas bar and restaurant on College Street West in downtown Toronto and features not only the traditional Japanese tapas but infuses a mix of other cuisines like Italian, Korean, Indonesian, and more into their dishes.  When you arrive or leave, the staff also vocalizes it loudly like in most izakayas like Guu or Kingyo Izakaya.  Like Kingyo, Hapa Izakaya is a bit on the lower side of noise when the restaurant isn’t too full.  Instead of dining in the bar area, we ate in the dining room instead where you can actually see the chefs cooking behind the open counter. 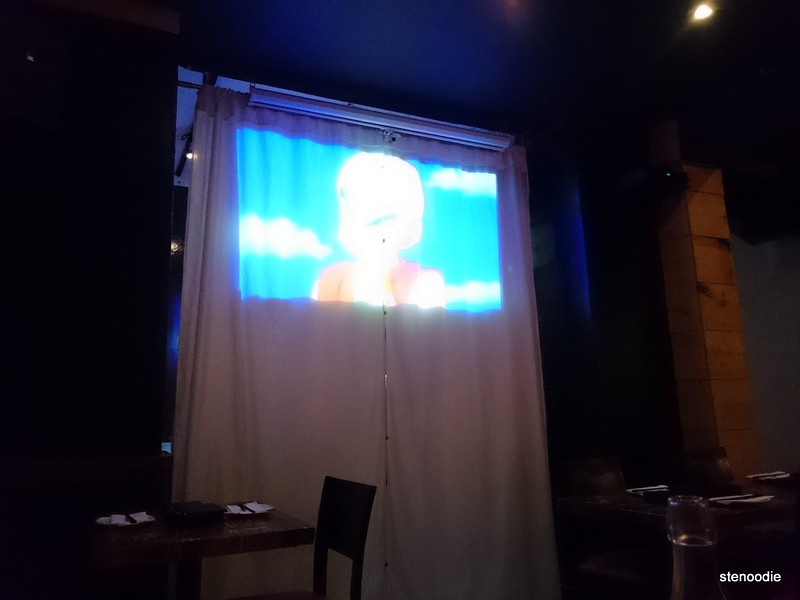 Dragon Ball Z was playing on this screen!

Since we were there for an early dinner at 6:30 p.m. on a Friday night, there weren’t too many people yet, but by the time we left, the restaurant was bustling.  It was interesting that their TV screens showed various anime cartoon shows like Sailor Moon, Naruto, and Dragon Ball. XD

The service throughout the night was exemplary — very attentive, warm, and friendly.  Our servers came to check up on us often and made sure to refill our water glasses and asked us on multiple occasions whether the food was all right and if we wanted anything else.  It was very respectful! 🙂

I was very excited to try the food especially since there were many dishes of food that you don’t usually see at a Japanese izakaya.  We ordered four dishes and two desserts to share. 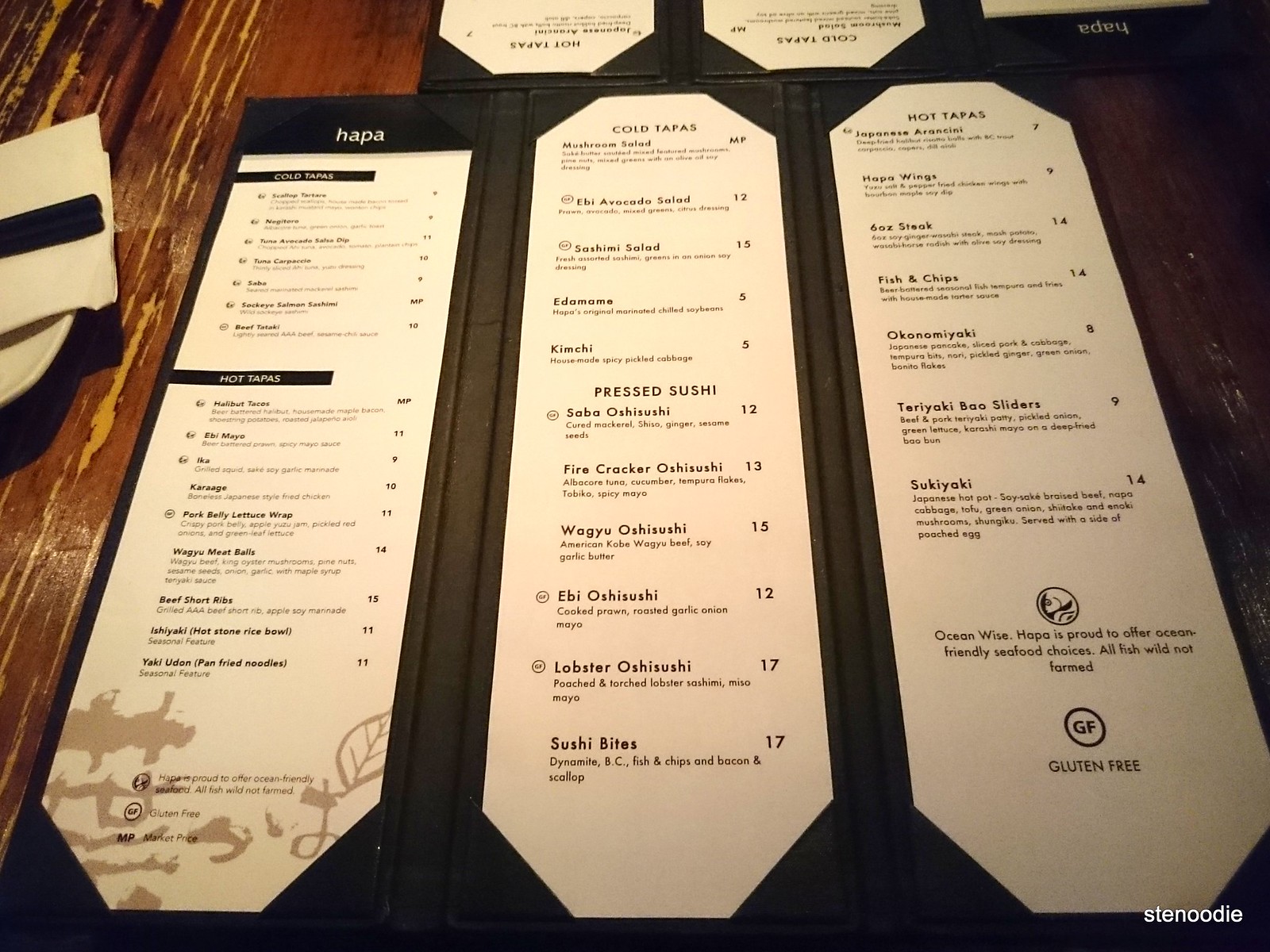 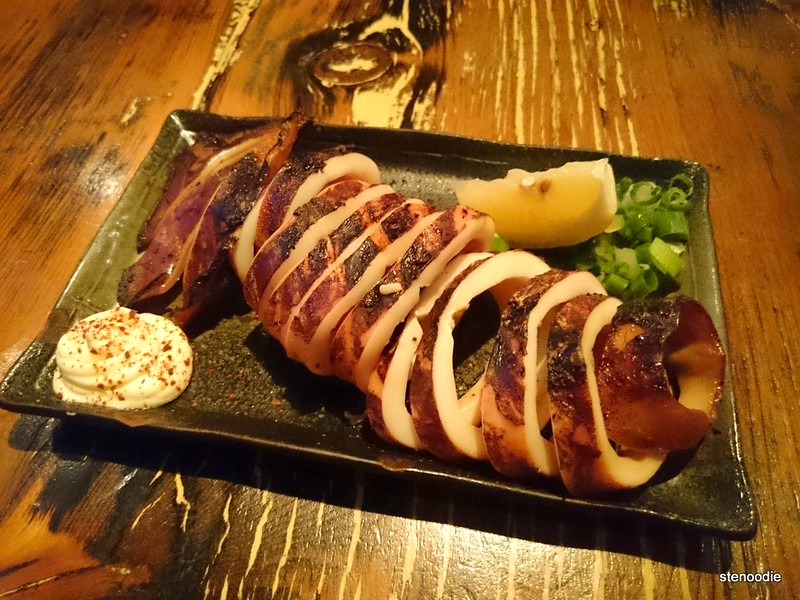 The food took a decent amount of time to arrive and everything was very nicely presented — yay foodie points!  The first to arrive was the Ika — grilled squid with a sake soy marinade.  It was so perfectly grilled and sliced up with a wedge of lemon, Japanese mayonnaise, and cut green onions on the side.  I liked how the grilled squid was not chewy at all and tasted very smooth.  Because of the sake soy marinade though, it was a tad on the salty side.  It was a very nicely grilled squid though! 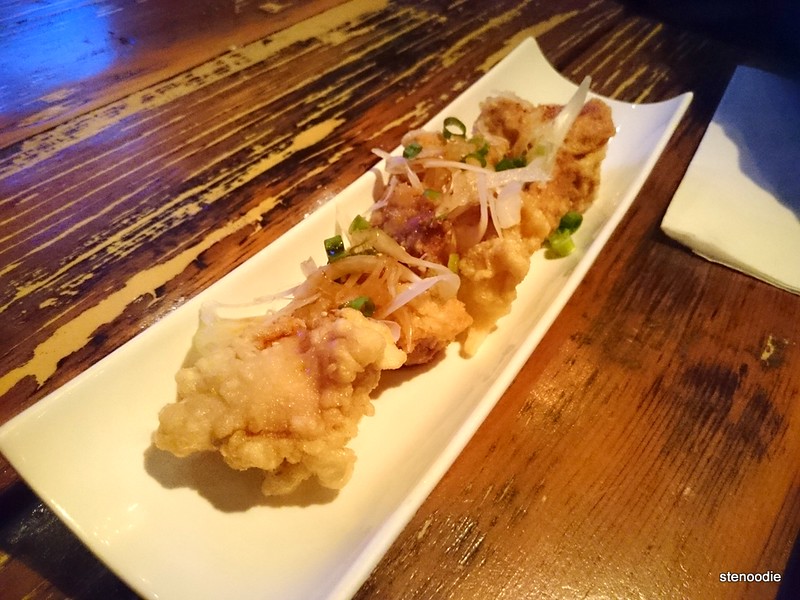 It is customary for me to order a side of karaage at a Japanese restaurant/izakaya because every place makes it differently and I definitely wanted to see how Hapa Izakaya prepared theirs.  Surprisingly, the karaage (Japanese style boneless fried chicken) arrived on a long plate (I expected it as a pile on a square dish) and was in fairly large chunks.

The minute I placed it into my mouth, I detected one thing I didn’t like about it — it was not crunchy enough and the fried parts were a little bit soggy.  It was soggy from the sauce that it was doused in including some green onions and onions.  The chicken meat inside the fried part was very tender though.  After a second morsel, I took a liking to the sauce that it was doused in but I still was disappointed that it wasn’t crunchy enough for my taste.  Karaage should be crunchy! 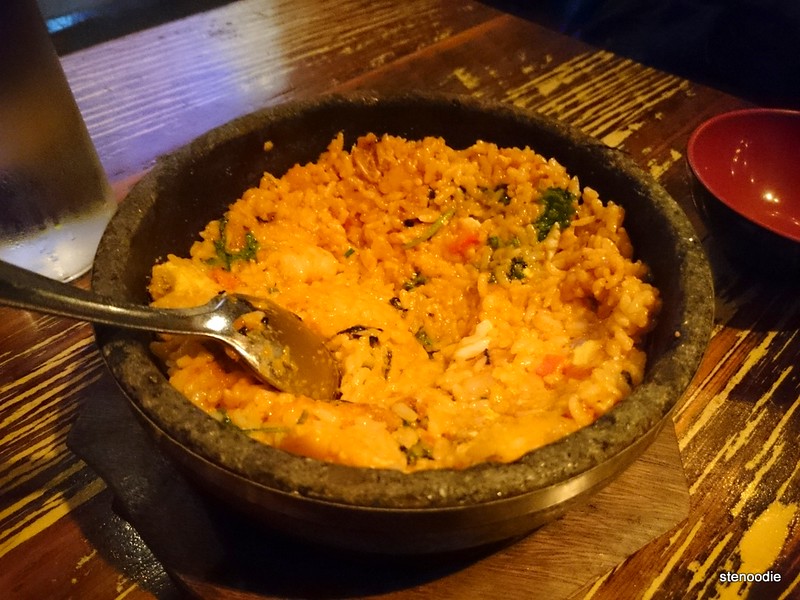 We ordered an Ishiyaki (hot stone rice bowl).  There were two options to choose from: Miso Pork or Nasi Goreng.  The Nasi Goreng which would include shrimp and spice intrigued me so we chose that one.  It arrived in a hot stone bowl and before I thought of asking the server to take a picture of the bowl before she started to mash up the ingredients, she expertly used the two spoons to combine all the ingredients inside the hot stone bowl together.  There were a fried egg, shrimp, rice, spices inside.  It smelled absolutely amazing!  She told us to let the rice cool down a little bit first before we scooped out the rice to eat in the little bowls.

The Nasi Goreng Ishiyaki was definitely unique and tasted really good.  It was a little spicy but I found that the spice level wasn’t as noticeable as you continued eating it.  I liked the little morsels of shrimp that were in it and it was a really yummy fried rice essentially. 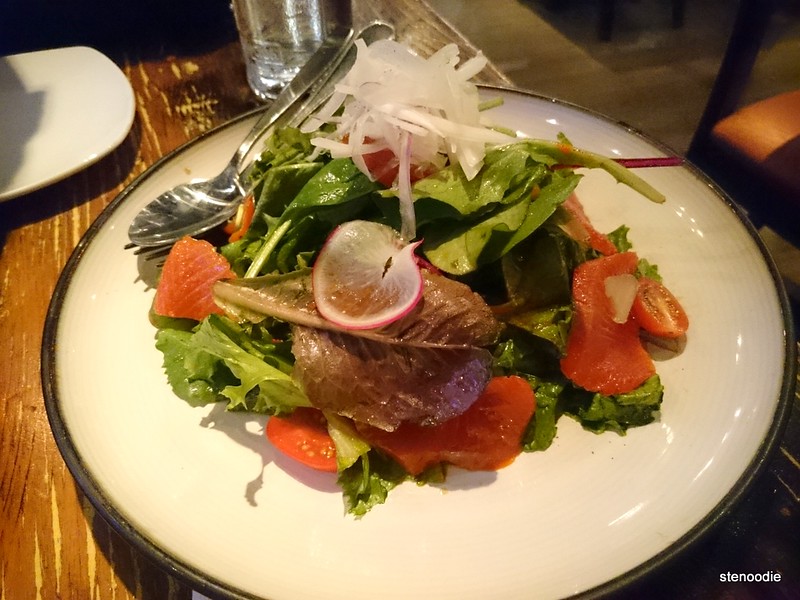 Our fourth dish was kind of like an off-menu one.  I have always been wanting to try a spicy salmon salad that my friend Andy has eaten before in Vancouver but have never found it in Toronto.  When I brought that up, Stephen wondered if the chef could make it for us since they do have a Sashimi Salad on their menu.  We inquired about this with the server and she said that the kitchen would be able to accommodate that for us.  Cool!

Thus, we received a Spicy Salmon Salad custom made for us (same price as their Sashimi Salad) and made with a spicy dressing.  It was a decent portion of salad with slices of wild salmon (Hapa is Ocean Wise) on the side with a slightly spicy dressing.  I really liked how the salad was so fresh!  The slices of salmon were pretty fresh too but not exactly what Andy has had before.  We tried though!  It was a good dish to compliment the other ones that we had. 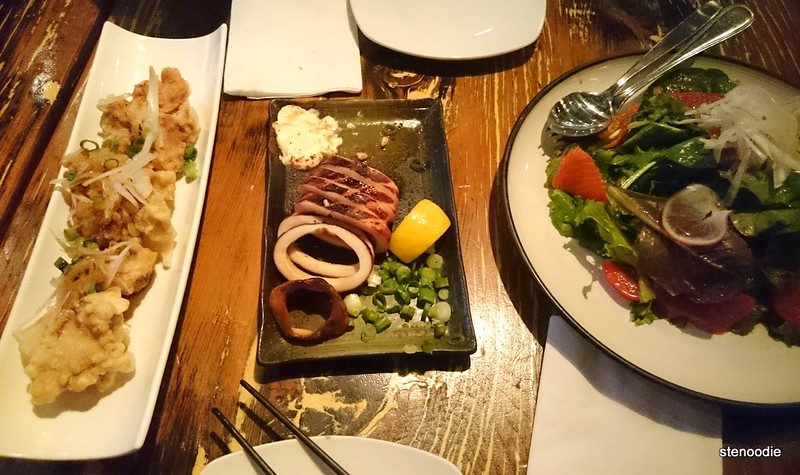 I love seeing lots of food on the table! 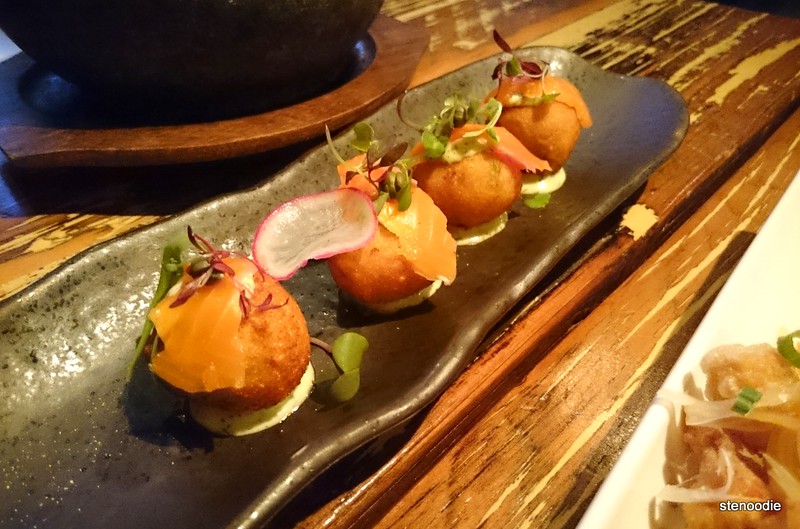 The last dish we had before our desserts was the Japanese Arancini.  I’ve never had arancini (Sicilian in origin and are stuffed rice balls which are coated in breadcrumbs and fried) before so I was excited to try!  Here at Hapa Izakaya, they are deep fried halibut risotto, BC trout carpaccio, with capers and dill aioli.  They looked so cute and amazing! 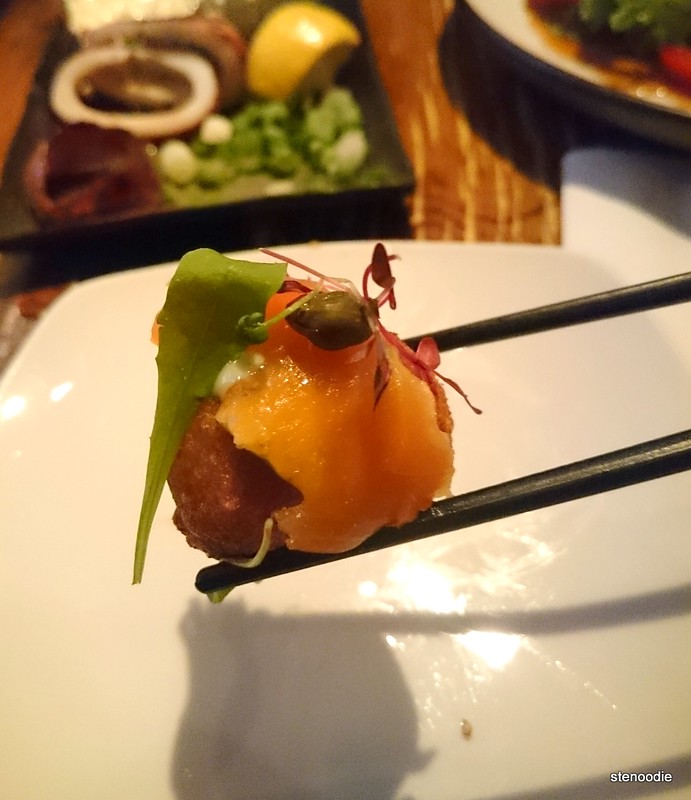 So precious and full of flavour from that little caper and trout!

I picked up one with my chopsticks and took two bites to eat it.  The little caper gave the entire arancini a pop of flavour but I loved the freshness of the BC trout carpaccio (I thought it was salmon at first XD).  The inside of the ball was very smooth that you could not distinguish the halibut risotto at all.  It was very good! 😀  I definitely enjoyed this unique tapa!

Alas, we were at the end of the meal and the restaurant had filled up quickly with lots of people!  We ordered two desserts to try.

I wanted to try their Matcha Crème Brûlée.  It was a little cup with a strawberry on top.  The glazed icing wasn’t very apparent, but it was full of flavour.  It was very soft with matcha ice cream and pudding.  It was delicious! 🙂 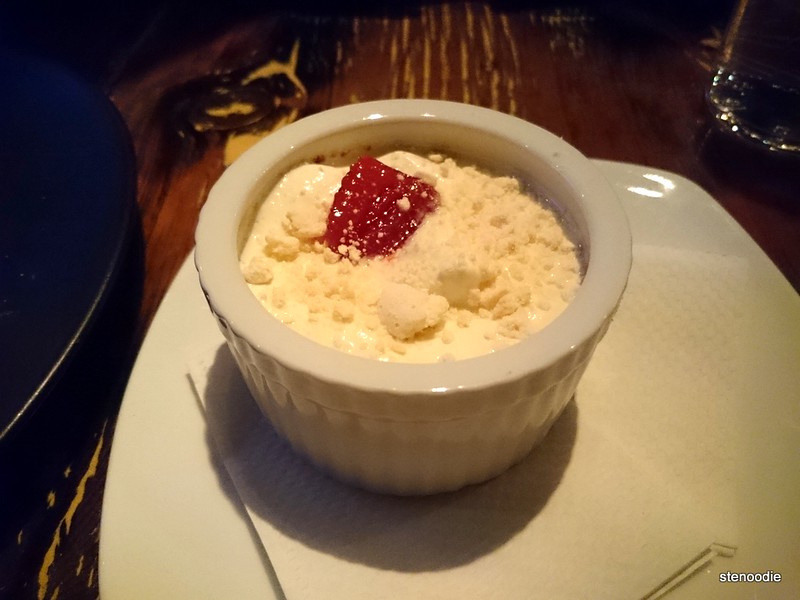 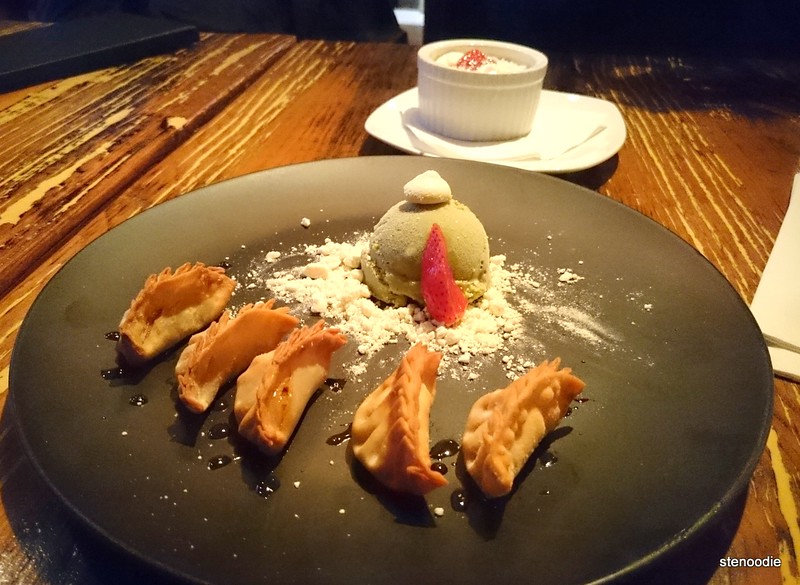 The Japple Pie Gyoza was definitely another unique dish of the night.  It was Fuji apple pie filling in a crispy gyoza shell served with their feature ice cream which on this night turned out also to be matcha ice cream.  I kind of overlooked this dessert on the menu when I was scanning the desserts so I’m really glad that Stephen caught this one and ordered it.  What a dessert!

The gyoza shells were very crispy and miniature.  Inside each one, there was apple pie filling that was warm!  When you eat it with the cold matcha ice cream, it is such a unique taste.  It’s really worth a try! 😀

Alas, the night came to an end but I’m really happy that we got to try so many dishes from Hapa Izakaya.  Have you been to this izakaya before?  If so, what did you think of it? 🙂

By the time we left, the place was bustling! So cool that you can get the beer in a big tall tower (picture in the right) 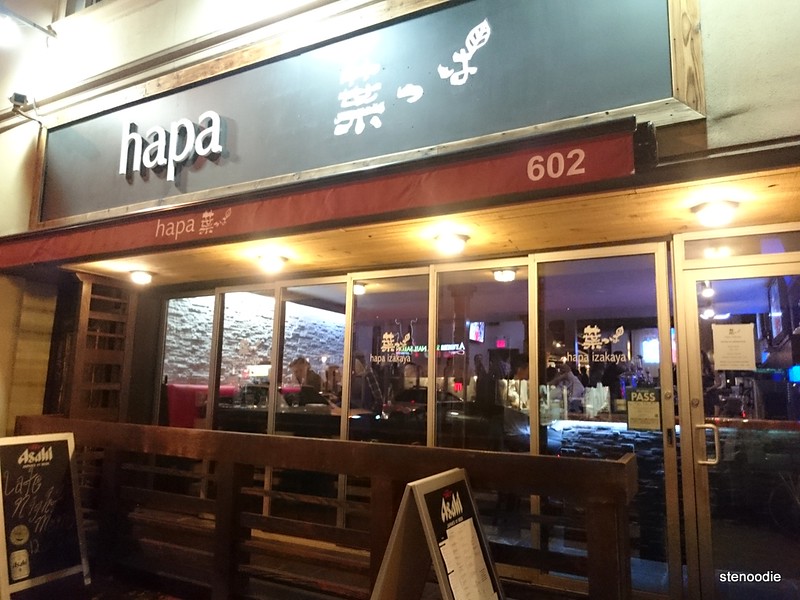 I missed Hapa Izakaya the first time when I was walking by. Their storefront is quite nondescript!

(Food blogger wise, it would be difficult to return to this restaurant since there are so many other restaurants in downtown Toronto to try, but foodie-wise, this restaurant has many more varieties of dishes that I’d love to try!  I know I would really enjoy the rest too! 🙂 )