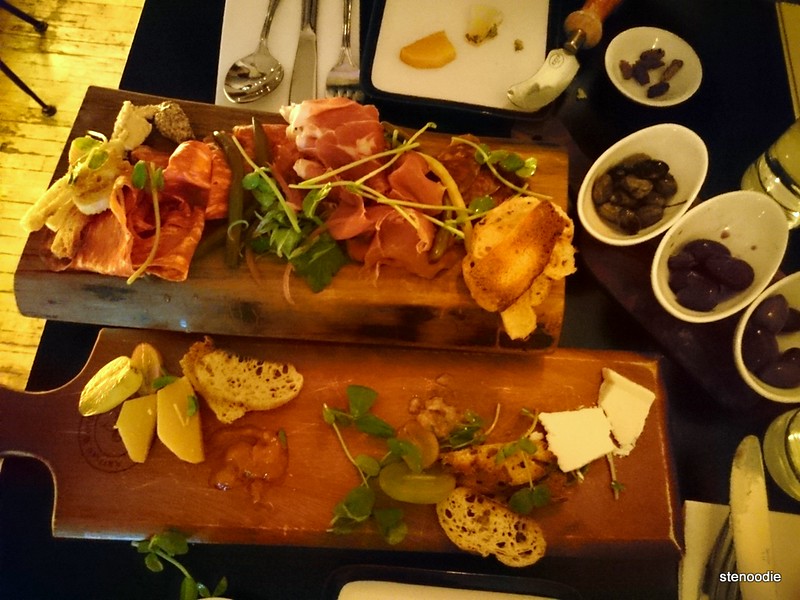 Two weeks ago, Sindy and I went to Nuit Social for dinner.  This dinner was partially courtesy of Zomato — Pardis of Zomato sent me a $25 voucher to use towards a meal at Nuit Social as a thanks for all the food and restaurant blogging that I do.  (It was a great gesture; thank you!)  I have to admit, however, that up until this point, I had not heard about Nuit Social.  According to Pardis, it is a “hidden gem on Queen and the perfect spot for the #nextgreateat!”  I was quite excited for this! 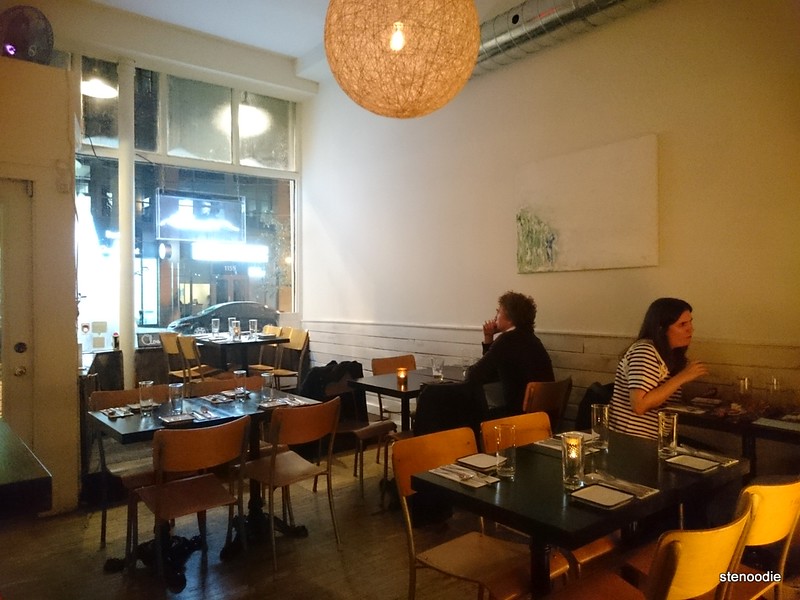 The inside of Nuit Social 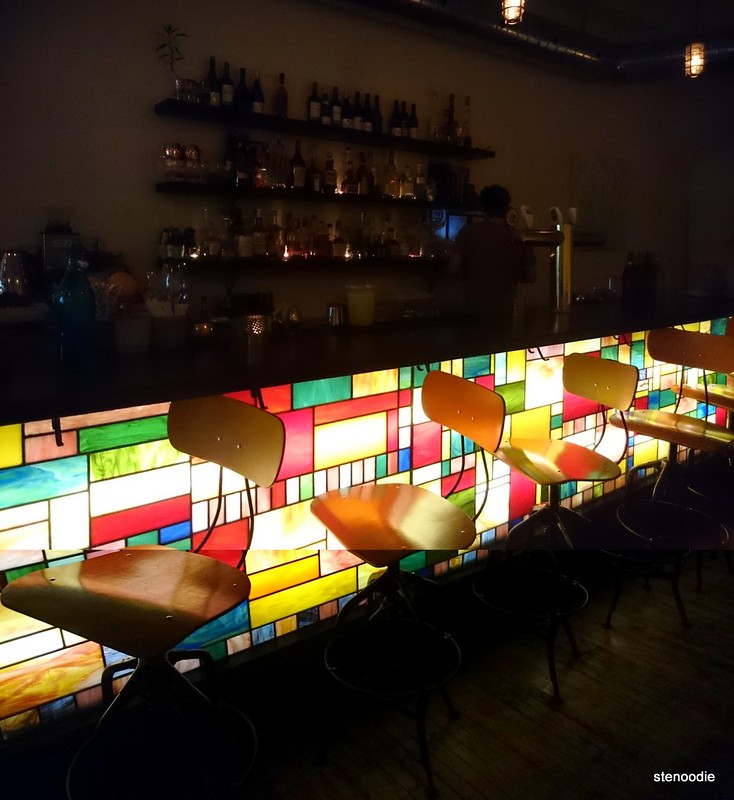 So pretty and characteristic

It was easy to make reservations for a table of two on a Tuesday evening for Sindy and I.  I took the streetcar on Queen Street West past Ossington to get to this small restaurant.  The restaurant itself is actually quite nice.  One of their main features are the bar stools that line a colourful stained-glass backing which you can’t miss when you walk in.  There weren’t many people dining here on a Tuesday night.  Perhaps it was because it was raining outside too? 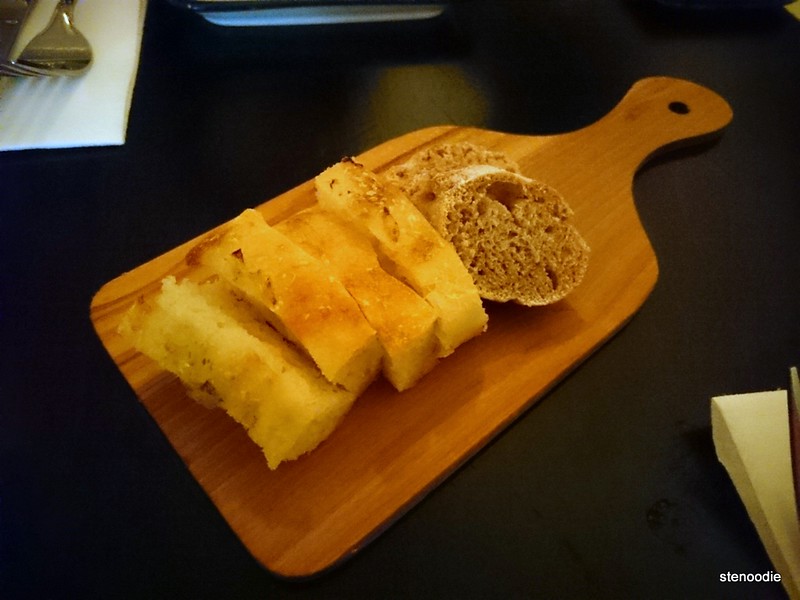 Since we had a $25 voucher (which actually isn’t that much after you start selecting items from the menu), I have to admit that I splurged a little bit while ordering.  Since I wanted to try both their Social Boards and Social Plates, we chose three meats, three cheese, and three olives to share for the boards, and Pork Ribs and P.E.I. Mussels for the plates.

Our server that night was professional when delivering our dishes and checked up on us often to see if everything was okay.  We first received some bread and butter to start off with.  It arrived on a cute little board.  I found that the thin type of bread tasted better than the other pudgy one. XD 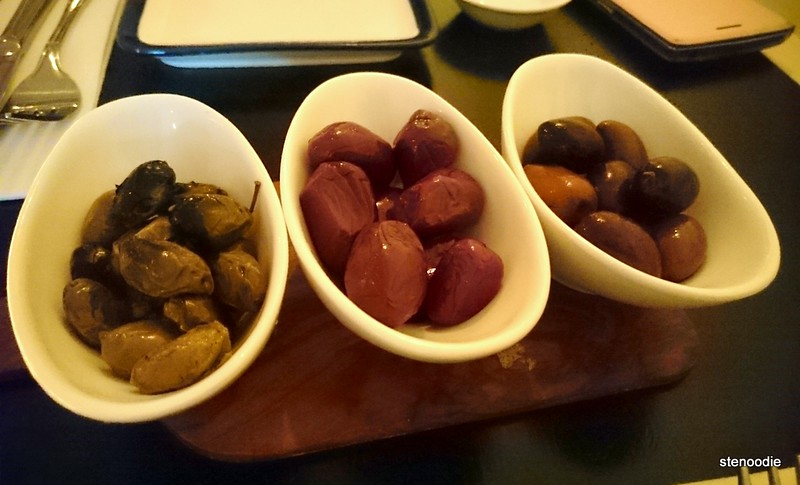 Up next, we got the three types of olives.  Sindy actually isn’t a big fan of olives, but I am, and I really wanted to try their olives!  I got the Fire Olives from Italy, Maddelena (Alfonso) from Peru, and Kalamata from Greece.  They were served in small bowls on a platter.  I used my hands to taste each one starting from the left.  These Fire Olives were green, charred over flame, and smoky.  To me, they tasted a little salty and that was it.  I really liked the Maddelena from Peru!  They were purple, with hints of wine, and vinegar.  To me, they tasted like wine!  They were really plump too and I really liked it.  The last one was the Kalamata which were brown, smooth, and meaty.  These ones were very sour!  Sindy found them all a little too salty and overwhelming after a few olives, but I enjoyed them overall.  I’m not a huge connoisseur of olives, but I do enjoy them. 🙂 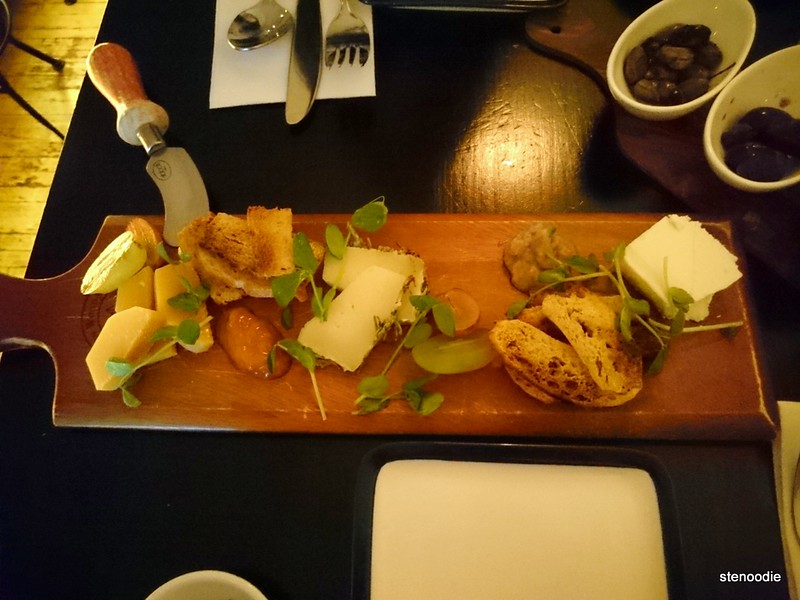 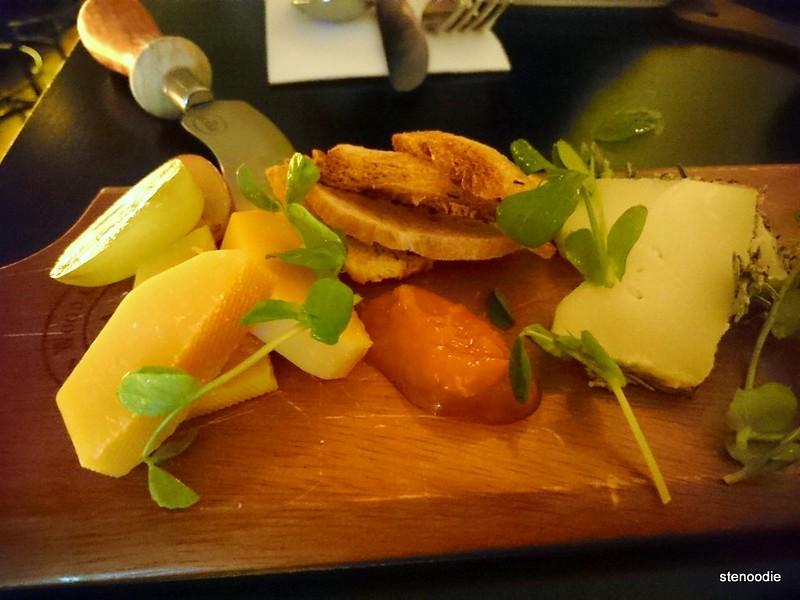 I was excited for the second Social Board!  This one was of cheese.  We chose the Dutch 5 year Gouda from Holland, Heliodoro Rosemary from Spain, and Rondin du Poitou (goat cheese) from Loire Valley, France.  I love cheese and especially strong ones like goat cheese or blue cheese.  The cheese board was a beautiful assemble of the cheese, fruit jams, crackers, and fresh sprigs.  It was a beautifully canvassed board of food! 🙂 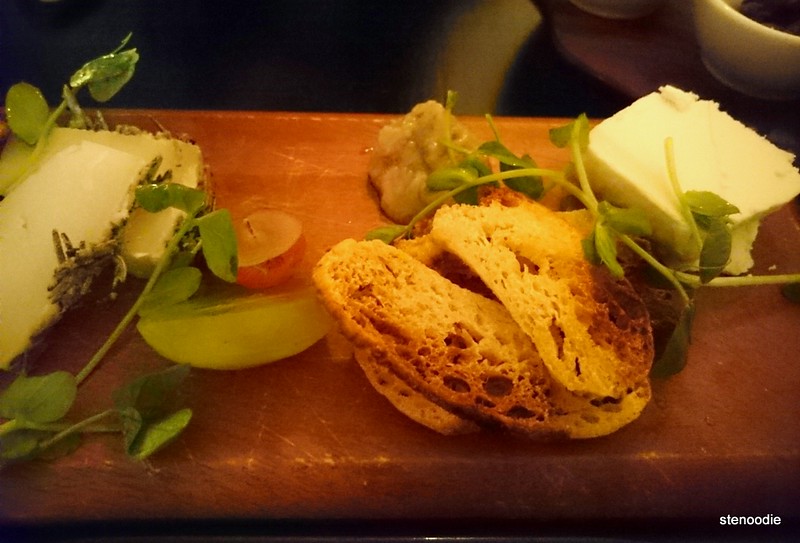 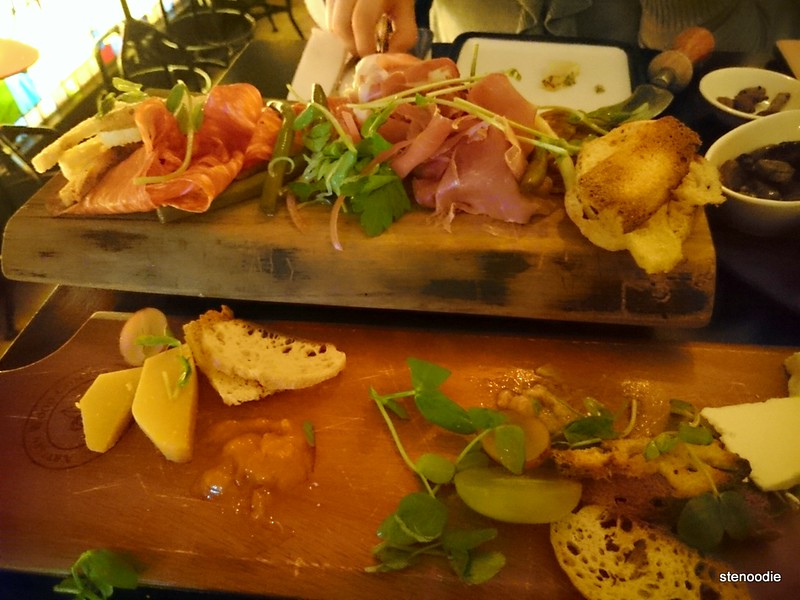 I liked all the cheese on the board as it was all fresh and distinct in taste.  I especially liked the goat cheese though! 🙂

The last Social Board was a meat one.  Yay!  I love charcuterie.  I actually thought all of the cheese and meat would been on one board as that would have made for a very impressive photo, but this looked good too. :3 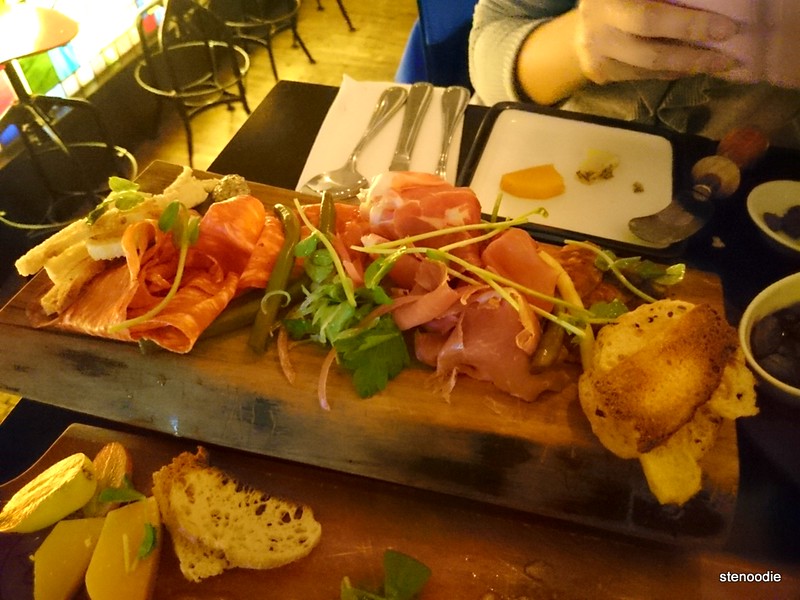 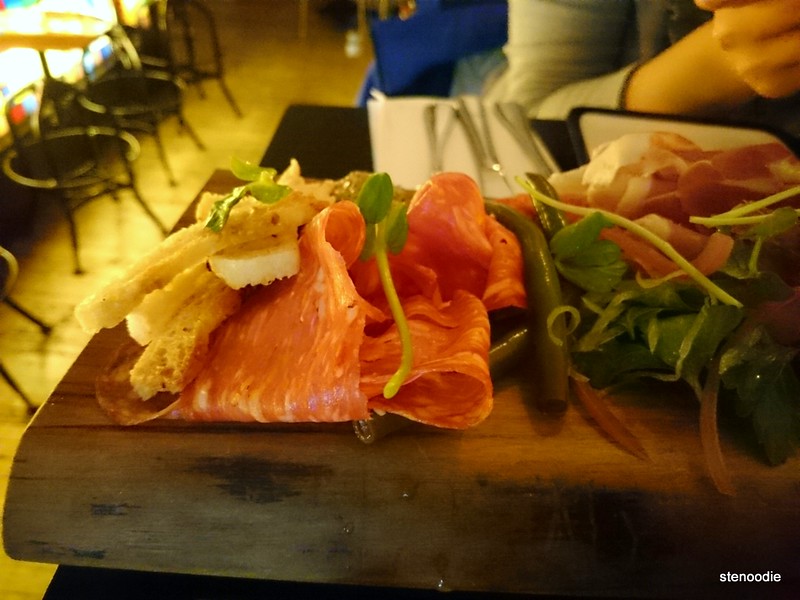 For the meat board, we chose Chorizo Iberico from Spain, Prosciutto from Italy, and Lonza from Toronto.  I really like prosciutto so I definitely wanted to try out how they prepared it here.  I have had authentic Chorizo Iberico in Spain last year, so I wanted to relive it.  The Lonza was really good too!  I liked how the prosciutto was so thinly sliced and not too salty.  The Chorizo Iberico was pretty good but I think it tasted a little dryer than usual. 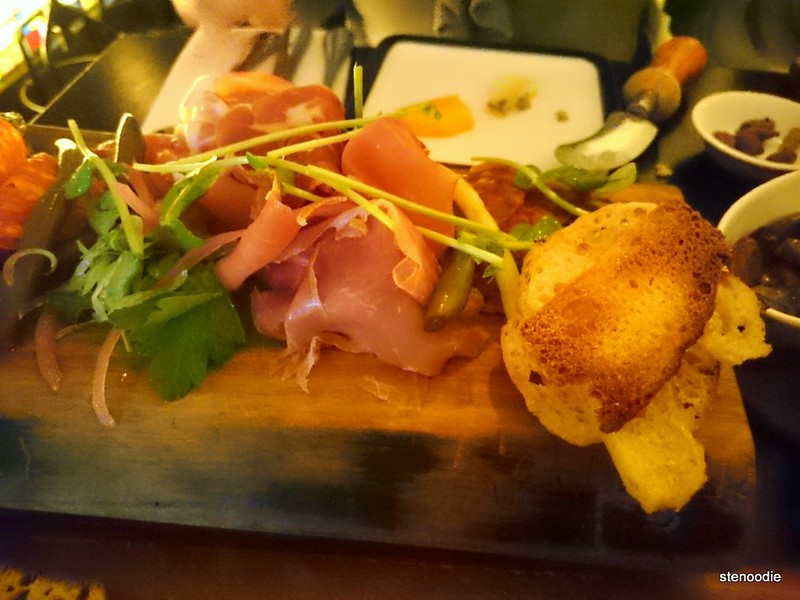 Proscuitto. Couldn’t get a picture of the Chorizo Iberico from this angle though

The meat board came with green peas, crackers, and also sprigs of green to go with the salty charcuterie.  It was fun to eat with our hands and assemble “creative” sandwiches or wraps with the cured meat with whatever was on our boards.  I didn’t take pictures of these so-called creations since my hands were too busy eating and piling on food from the board. 😀

After this, the boards were cleared from our table (we were sitting at one of the high tables close to the stain-glassed counter so our table was quite small) and we received our Social Plates of the night!

Yay!  I actually didn’t have much expectation for the Pork Ribs and I was intrigued with this dish due to it having macaroni and cheese too.  When it arrived, it smelled amazing!  It was a huge deep bowl where there were ample pork ribs stack on top of one another and all piled in a deep dish of macaroni and cheese.  It was amazing! 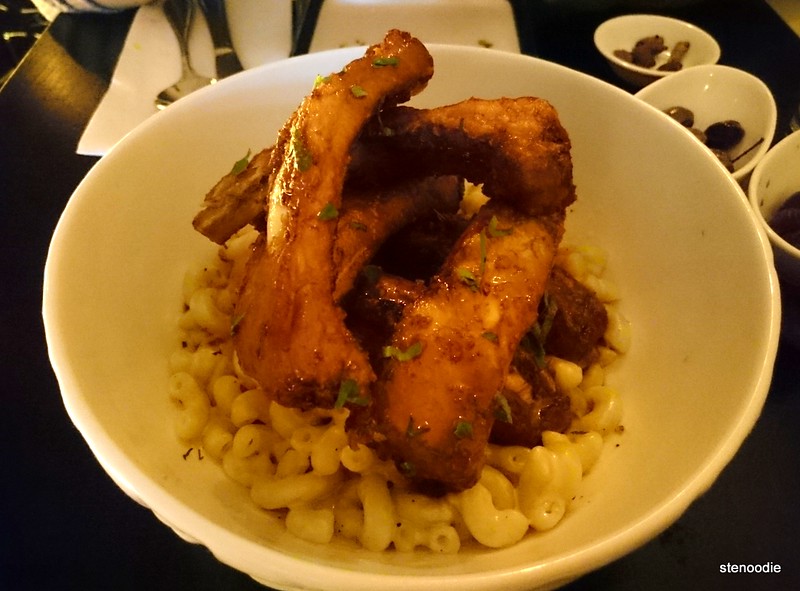 Again, this was a hands-friendly meal so I used my hands to eat the pork ribs which were maple soy glazed.  WOW!  I have never had maple soy glazed pork ribs that were so tender and delicious before!  They were seriously jaw-droppingly delicious!  It was so tender that Sindy could literally pulled off the meat from the rib bone for two of the pork ribs and did so.  It was perfectly done!  The smoked macaroni and cheese actually didn’t taste too smokey to me, but it was a really well done combination of food for one dish.  I loved this! 🙂 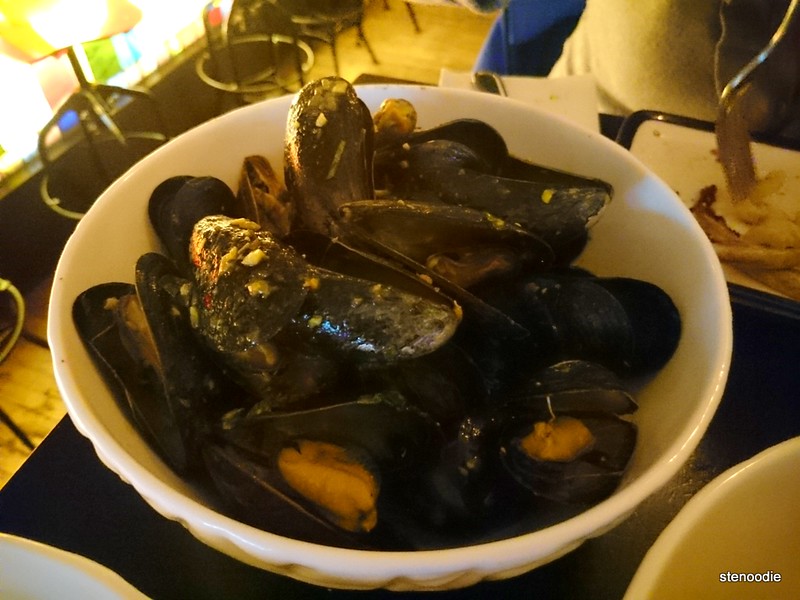 Our second Social Plate was the P.E.I. Mussels done in a rich broth of tomato, saffron, and oregano.  Again, once the lid came off this dish, the aroma filled my nose.  It smelled amazing!  Haha, and what do you know, another dish that can require hands!  We both dug into the mussels and ate the meat from the shells.  It was really good!  (It’s not as record-breaking-tender-soft as the ones I had from Boralia, but these ones were still finger licking good!)  At first, we were a little afraid that we wouldn’t be able to finish this last dish because we were already filling full.  Thankfully, there was nothing else in this dish except for the mussels, so we were able to finish it.  I drank a lot of the soup that was left in the bowl too as the broth was simply perfect and delicious!  I was very impressed. 🙂 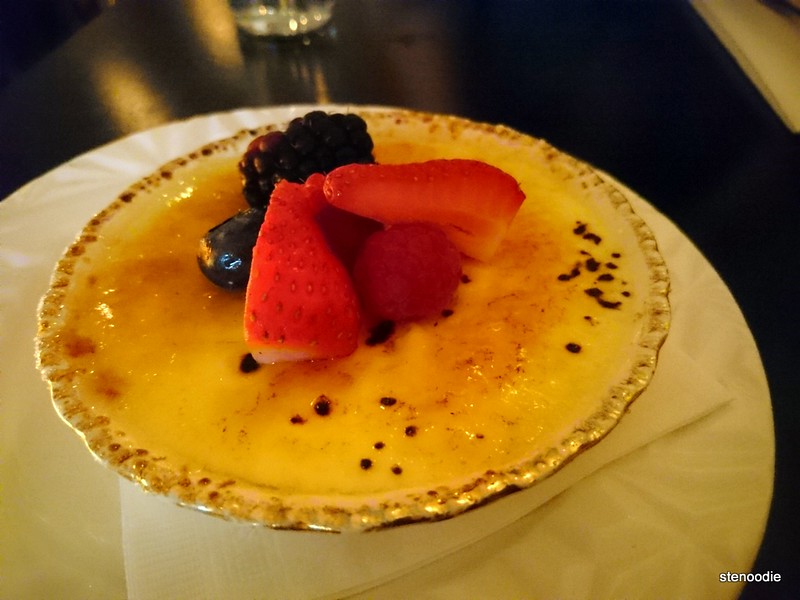 We didn’t finish the Pork Ribs and (and some of the olives), so I packed those home to enjoy.  Before we left though, I certainly wanted to indulge in their dessert (despite the fullness).  We chose the unique-sounding one, Crema Catalana, which was a Spanish style citrus custard with fresh berries.  I didn’t know what to expect of this dessert, but when it arrived, it was just like a crème brûlée.  It also had a glazed top that you had to semi-crack.  Unlike most crème brûlées though, this one was actually warm!  Perhaps for this reason or how it was so milky, I actually didn’t like it very much.  Sindy was in love with it and couldn’t stop raving about how much she liked it.  I’m glad she enjoyed it! 🙂 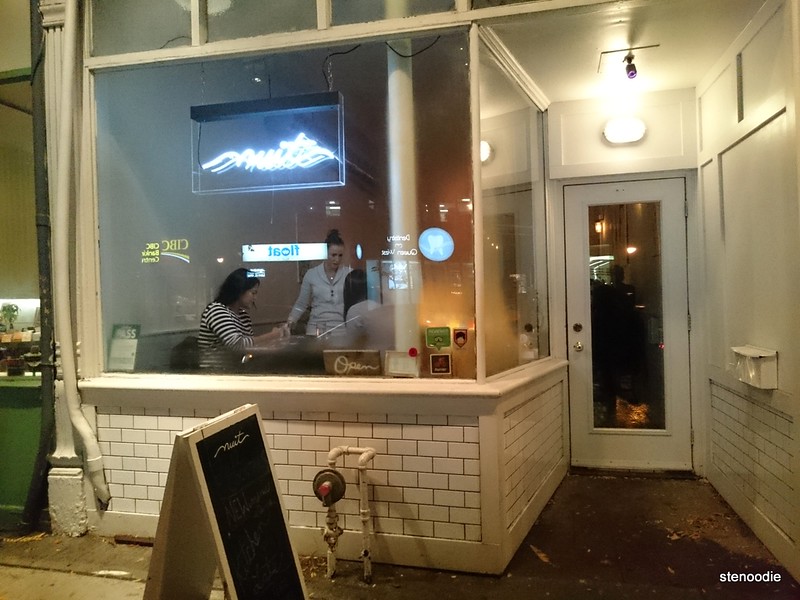 Their entrance is very nondescript

Again, the server was very accommodating that night and helped me to honour the $25 voucher that Zomato provided for me as a blogger.  Yay!  Thank you so much!  (We still had to pay out of pocket for the remaining charges though since we really over-order (haha).)  I really enjoyed my meal at Nuit Social and loved how uniquely fusion the food was.  I really didn’t expect that from them!  I hope more people know about them because they definitely deserve the recognition! 🙂

How about you?  Have you heard of Nuit Social before or have been there?  What were your thoughts?

FTC Disclaimer: Although Zomato reached out and provided me with a complimentary gift card to review this restaurant, the opinions expressed here represent my own and not those of Zomato or the restaurant.

Get Gorgeous for the your favourite gal pal with a 20% Off!

1 Response to Dinner at Nuit Social